Facebook-f Twitter Instagram Rss
Menu
Menu
Home » How An Alignment Works And Why Your Car Even Needs One In The First Place: Musings From A Suspension Engineer

How An Alignment Works And Why Your Car Even Needs One In The First Place: Musings From A Suspension Engineer

Have you ever wondered why your car seems to be eating tires at an alarming rate or why it doesn’t go straight down the road when the steering wheel is centered or why it wants to head off into the weeds every time you let go of the wheel? It may be that the alignment of your suspension is off and needs to be adjusted. This is very common and can be caused by a number of things. You may have hit a large pothole, or run into a curb. Either of these — or similar events — could have caused some suspension components to bend slightly or for the suspension bolts to slip a bit.

It doesn’t take much for the alignment, especially the toe setting (which we’ll discuss in a bit), to change. Your suspension alignment should be checked and adjusted every few years as part of normal periodic maintenance to keep your tires from wearing improperly. Poor suspension alignment can also lead to worse fuel economy since your car has to work harder to roll the tires down the road if they aren’t pointing in the right directions.

[Editor’s Note: For those of you who don’t remember or who are new to the site, this is Huibert Mees, former Ford GT and Tesla Model S suspension engineer. He’s got a column here on the Autopian to write about whatever the heck he wants. -DT]

How A Shop Checks Alignment

Most good tire stores will have a wheel alignment machine and can provide the alignment service on your car. For this work you should expect to pay around $100-150. Not cheap but well worth it.

Many modern machines work by using lasers bounced off of targets hooked to each wheel. The targets are attached using a set of precision clamps that grab the edges of each wheel and can adjust for any size and type of wheel. Lasers housed in the crossbar mounted high up on the machine shine down on these targets, and the reflection is used to very accurately measure the position of each target. This is all done while the car is sitting on a hoist that has low friction plates under each wheel so that the tires can move side to side and forward and backward without any resistance. These plates also allow the car to be steered without scrubbing the tires. At first though, while the car is being loaded onto the hoist and the initial calibration is taking place, the plates are held in place by pins.

Once the car is positioned on the hoist, the technician will attach the targets to each of the four wheels. They will then roll the car backward and forward a small distance. This causes the targets to rotate with the wheels, which are tracked by the machine. The pins that hold the low friction plates in place are then removed and the front wheels are steered left to right about 20 degrees. This is also tracked by the machine. The rolling backward and forward and the steering of the wheel tells the machine exactly where the car is and the tracking of the targets lets the machine calculate what the initial camber, caster and toe measurements are. From there on, it can just track the changes in the position of each target to see how the camber, caster and toe changes as the technician makes his/her adjustments. As you may have guessed, these machines are very complex and precise and also very expensive for the shop to buy. Not only that, the hoist has to be very precisely installed so it is perfectly level. If it weren’t, the car would slide off the hoist as soon as the pins are removed.

How To Read An Alignment Sheet

When the shop does an alignment on your car, the machine will create a printout showing the before and after measurements. Most stores will not necessarily give you a copy of this sheet but you should ALWAYS ask for a copy so you can see how bad your car was to start with and how well the shop adjusted it. Here is an example of a sheet for my 2015 Ford Flex: 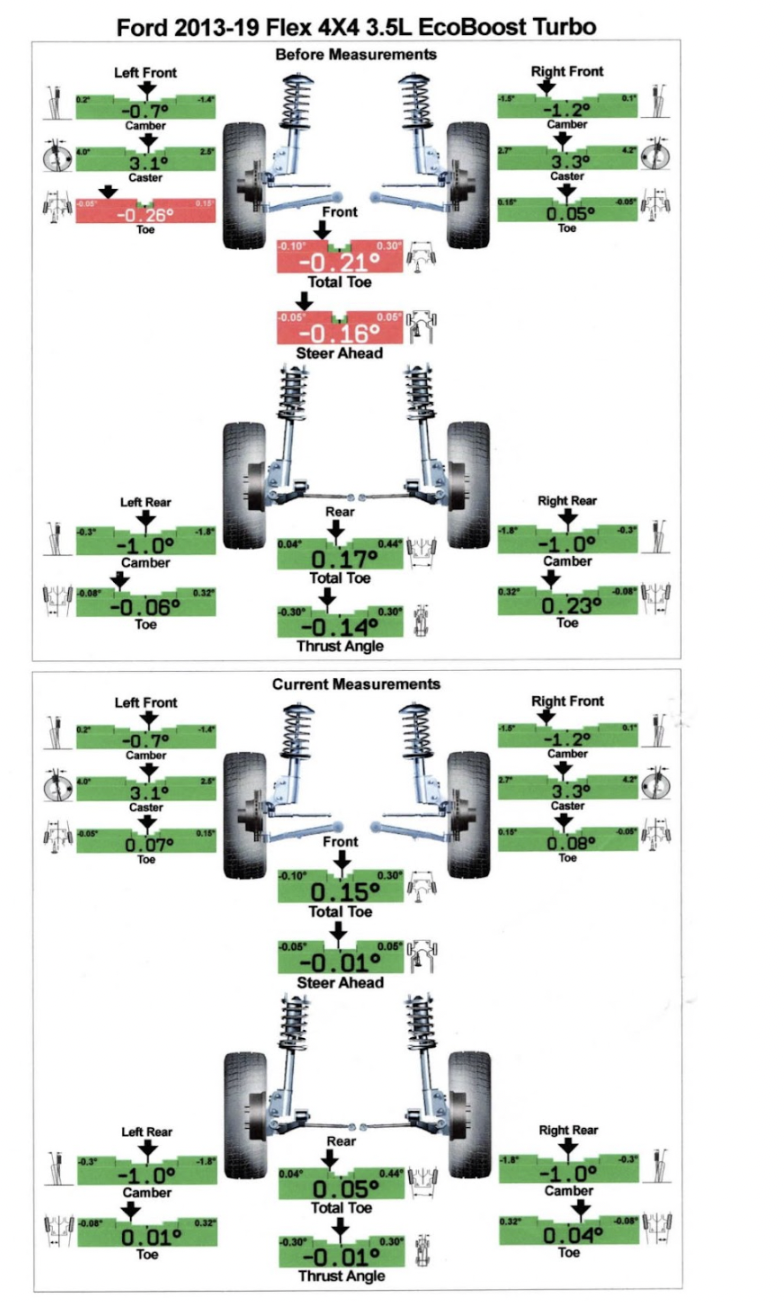 Let’s take a look at what this sheet is telling us and what all those terms mean.

So what do each of these numbers mean? Starting from the top we have Camber, Caster, and Toe for the left and right front wheels. After that is Total toe followed by Steer Ahead. Lastly we have Camber and Toe for each rear wheel as well as Rear Total Toe and Thrust Angle. Notice that there is no setting for rear caster. This is because caster is not critical for a rear suspension and is very rarely adjustable.

Camber – This is the angle of the wheel when viewed from the front. 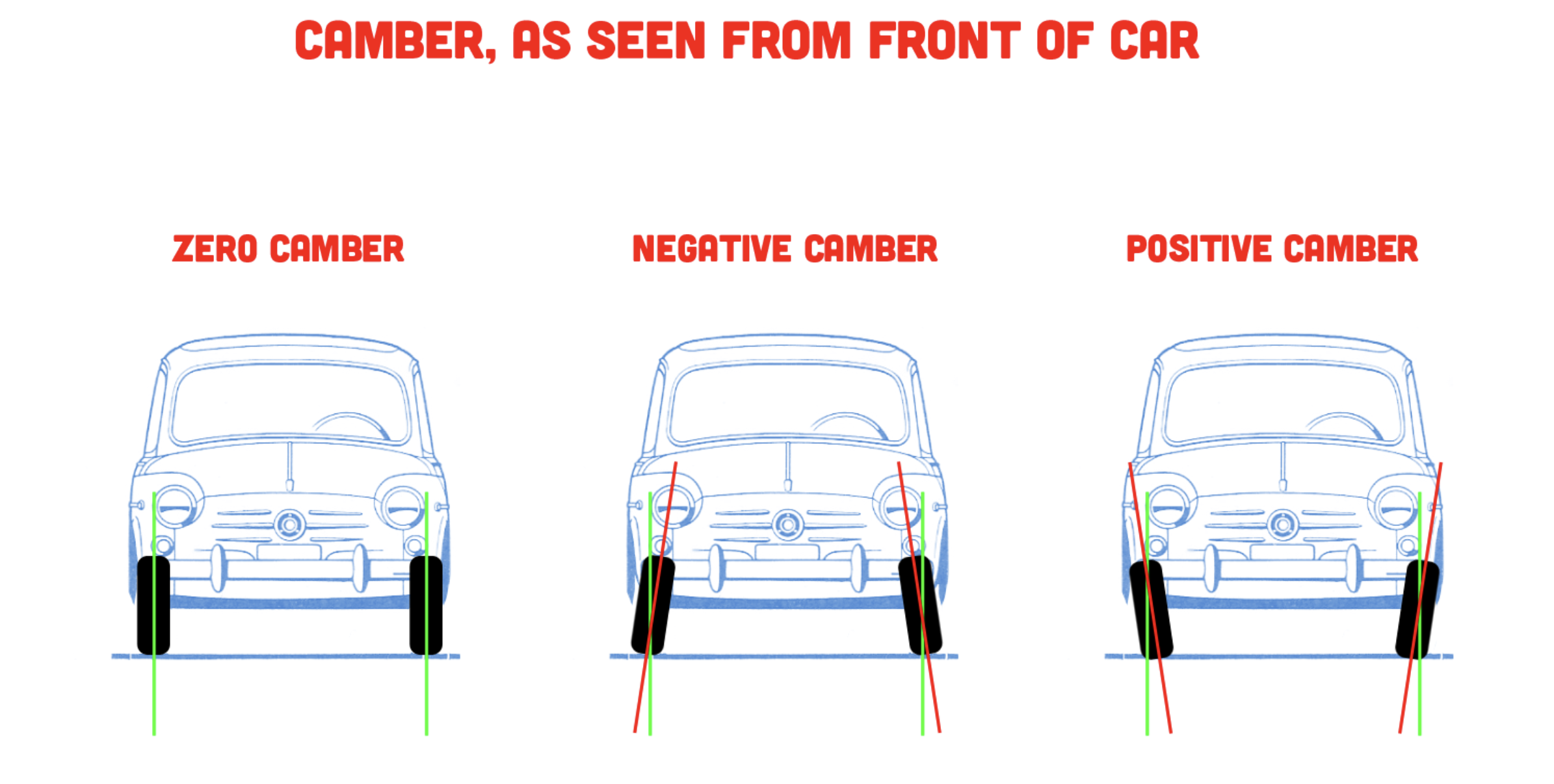 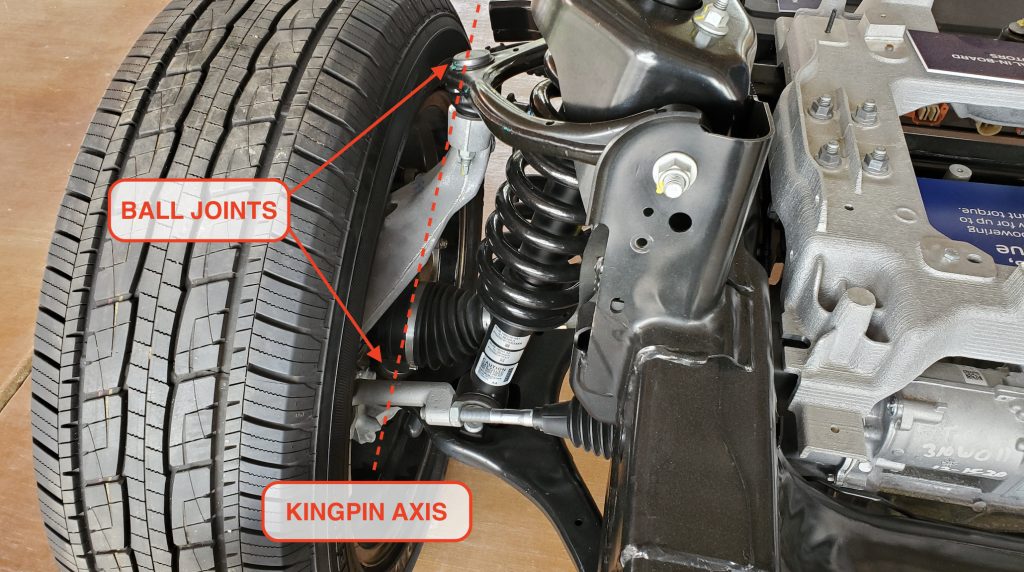 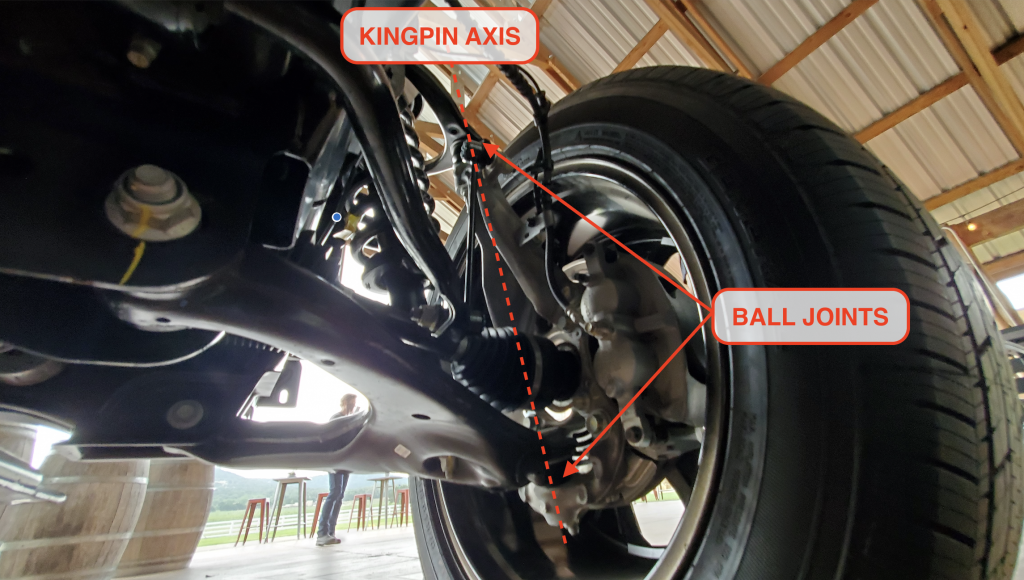 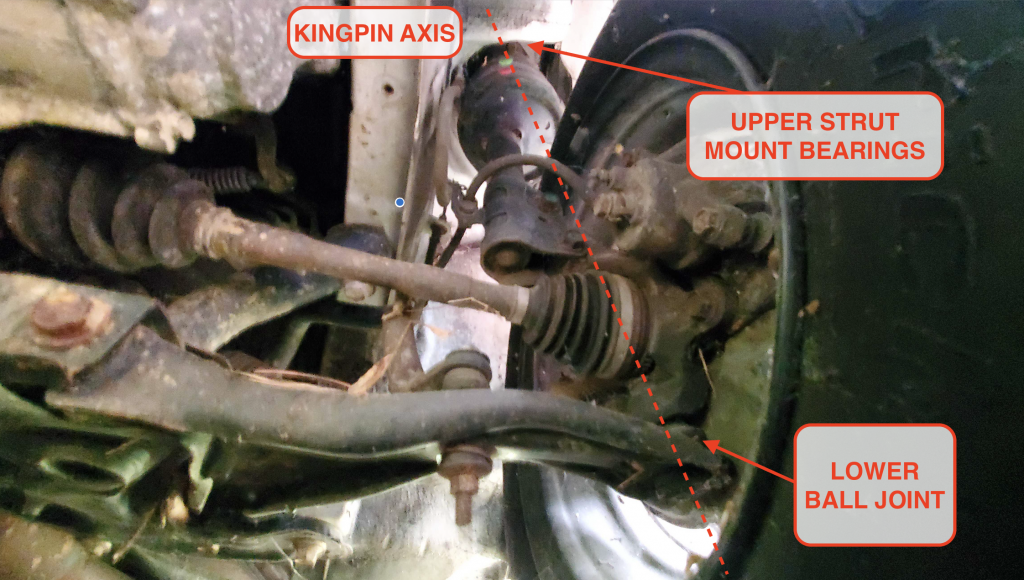 The angle between that kingpin axis and vertical is the caster angle: 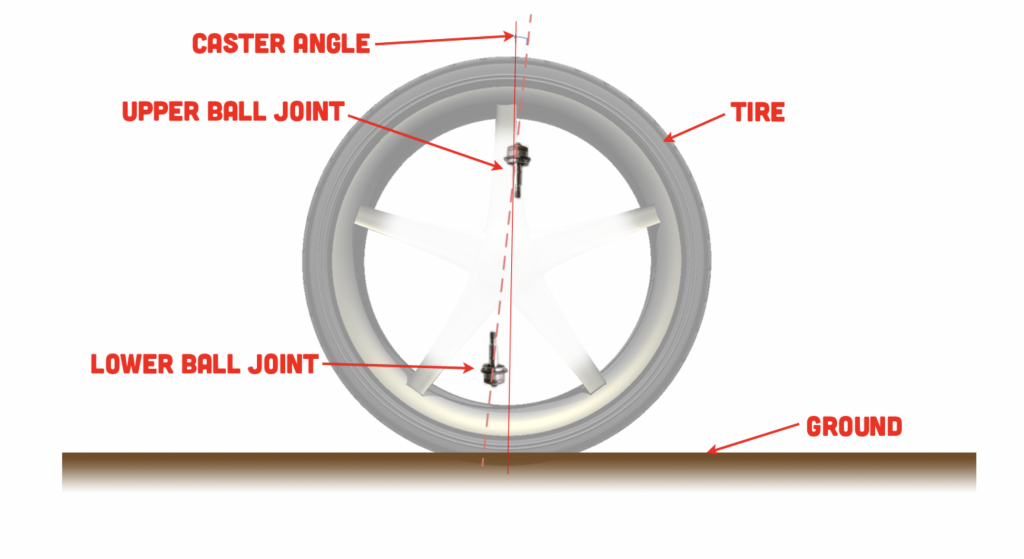 If you look up caster in the internet you will sometimes see it defined like this:

This is absolutely incorrect. The caster angle has nothing to do with the angle of the spring. It is simply defined by the upper and lower ball joints or the topmount and the lower ball joint.

Toe – This is the angle of the wheel when viewed from above. 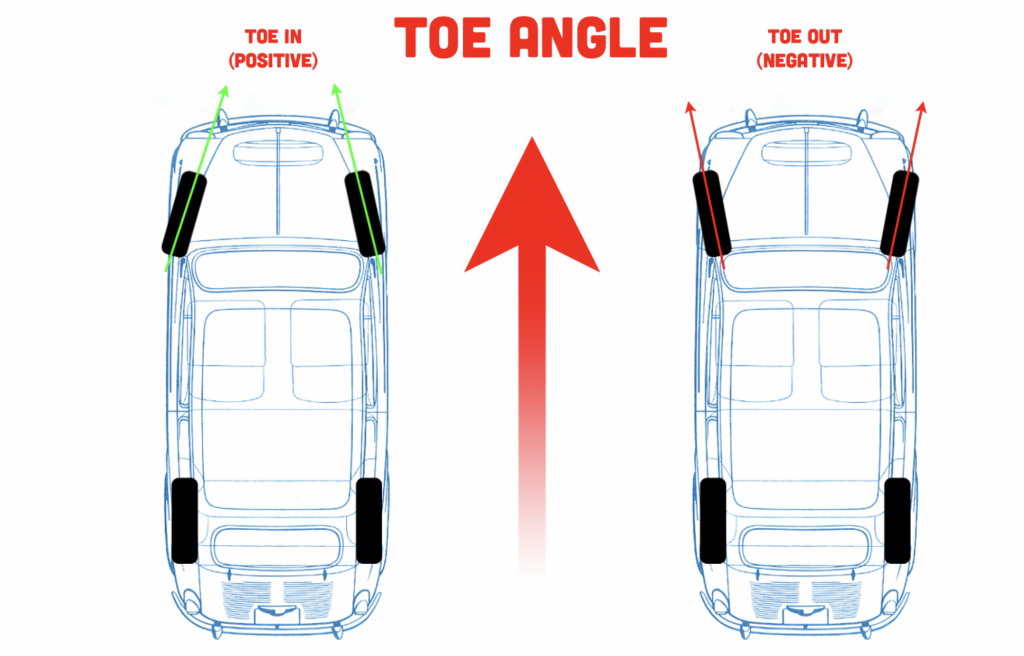 Total Toe – This is the angle between the left and right wheels and is the sum of the individual toe measurements.

Camber, Toe, and Total Toe in the rear have the same meanings as in the front

Thrust Angle – This is like Total Toe in the front and is commonly called “dog tracking.” Severe thrust angles mean that the car is driving down the road sideways and is not uncommon in older vehicles with worn out rear suspensions. Here is what happens when the thrust angle is way out of wack:

So now that we know what each of these terms mean, let’s look at the sheet for my Flex and see what is going on here. Notice how each measurement includes a graphic with two steps and two small black lines. As noted before, this graphic will be green if the measurement falls within the specification and red if it does not. 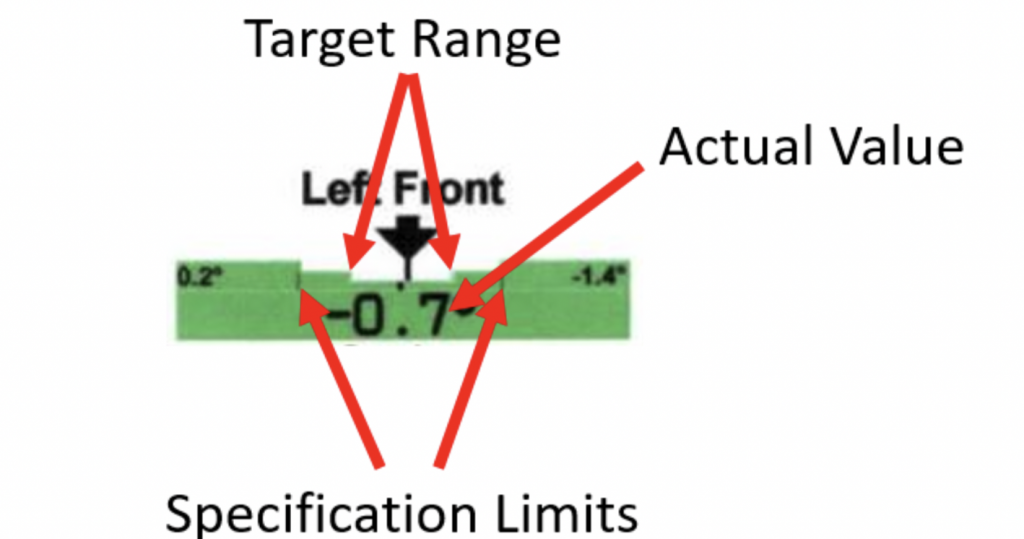 How To Adjust Alignment

So how are the alignment adjustments made anyway? The majority of vehicles these days use something called a “cam bolt” for camber and caster adjustment in the front and rear and in many cases also for toe adjustment in the rear. A cam bolt is a special bolt that includes an off-center washer attached under the head of the bolt and another one that sits under the nut. 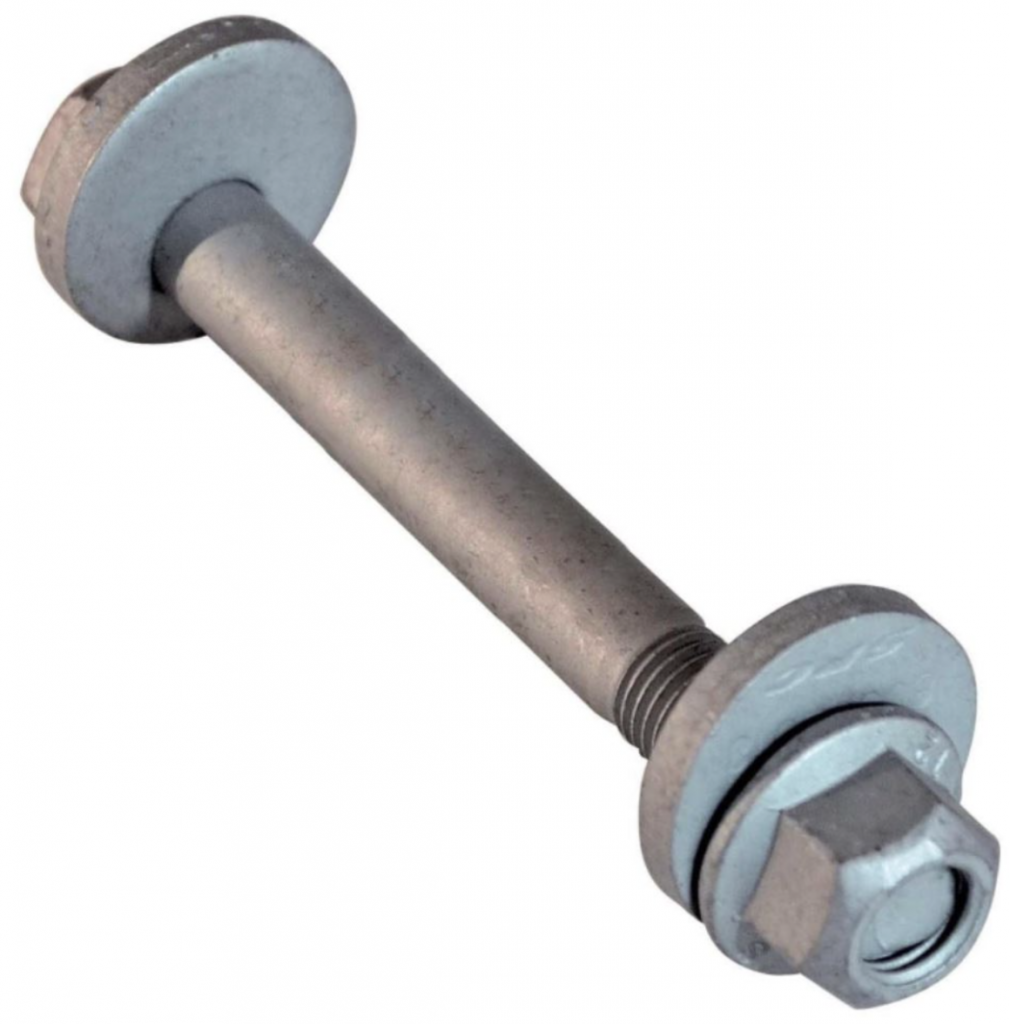 The holes that these bolts sit in are actually horizontal slots, and there are two edges on either side of the slot that hold the cams in place. Here is a view of a cam bolt with the nut and cam removed. 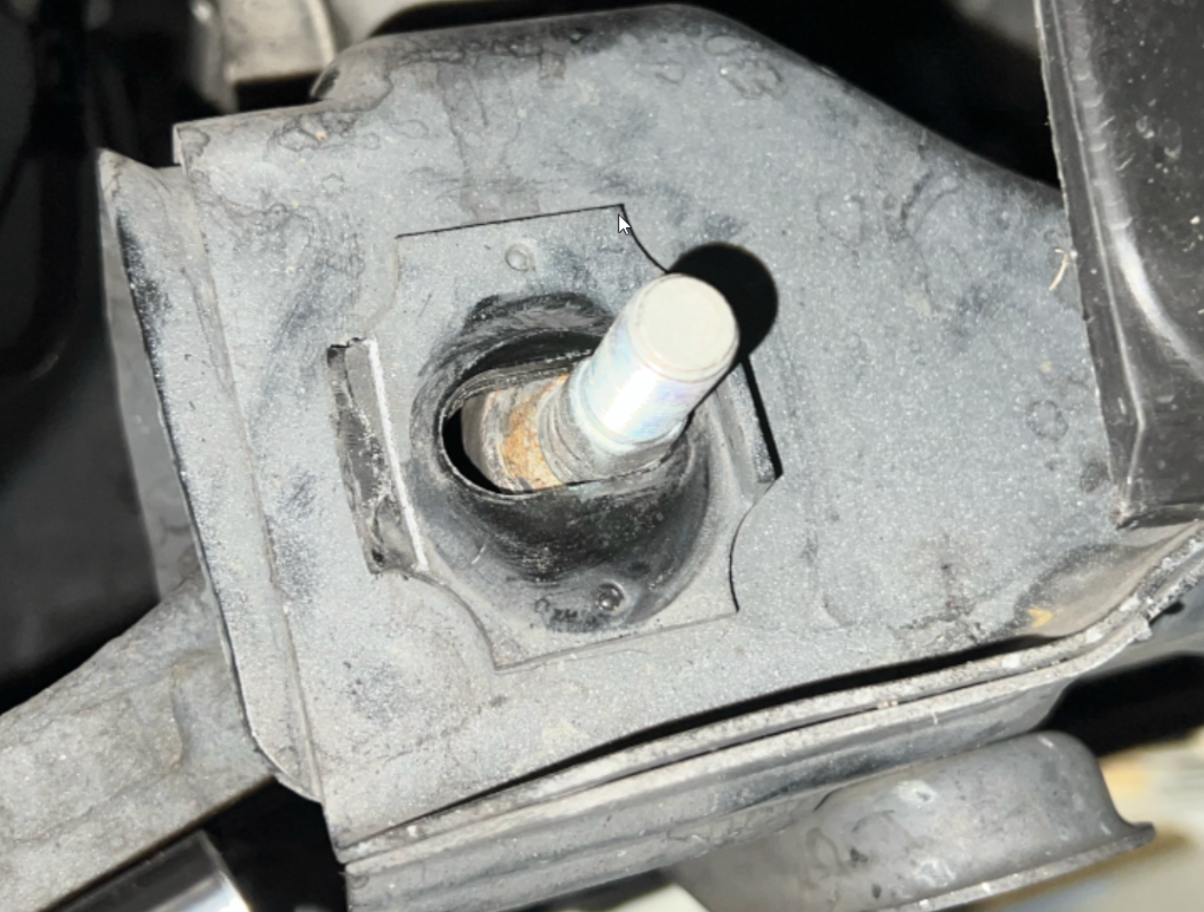 And here is an example showing the bolt complete. 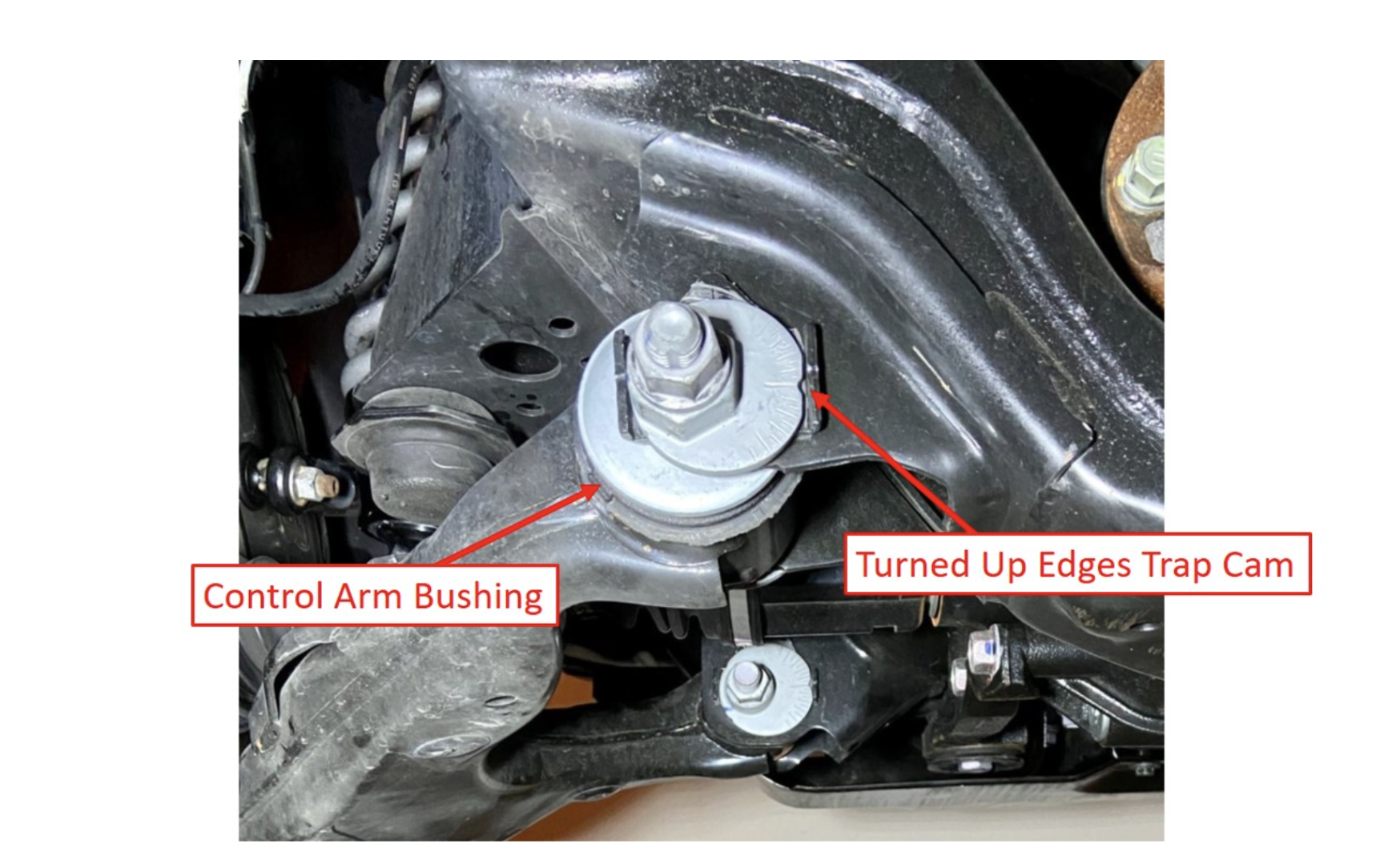 To make an adjustment, the nut is loosened and the head of the bolt is rotated with a wrench. The rotation causes the cams to rotate as well. Since the cams are trapped between the two turned up edges, and because the bolt is connected to the cams off-center, the bolt is forced to move back and forth inside the slot. This pushes the control arm bushing back and forth which moves the whole control arm inboard and outboard. This inboard/outboard movement of the control arm changes the angle of the knuckle which changes the camber and/or caster angles. Notice in the image above that there is a cam bolt on each of the two control arm bushings. The technician needs to adjust both bushings in the right combination to make the camber and caster adjustments individually. Once the right camber and caster angles are achieved, the nuts are tightened again and everything is clamped in place. By the way, in the image above, both cam bolts are at the limit of their adjustment range so I hope whoever owns this vehicle was able to get their camber and caster angles in spec because there is nowhere to go from here.

For many rear suspensions, the toe adjustment is made in the same way with a small cam bolt adjusting the position of the rear toe link. 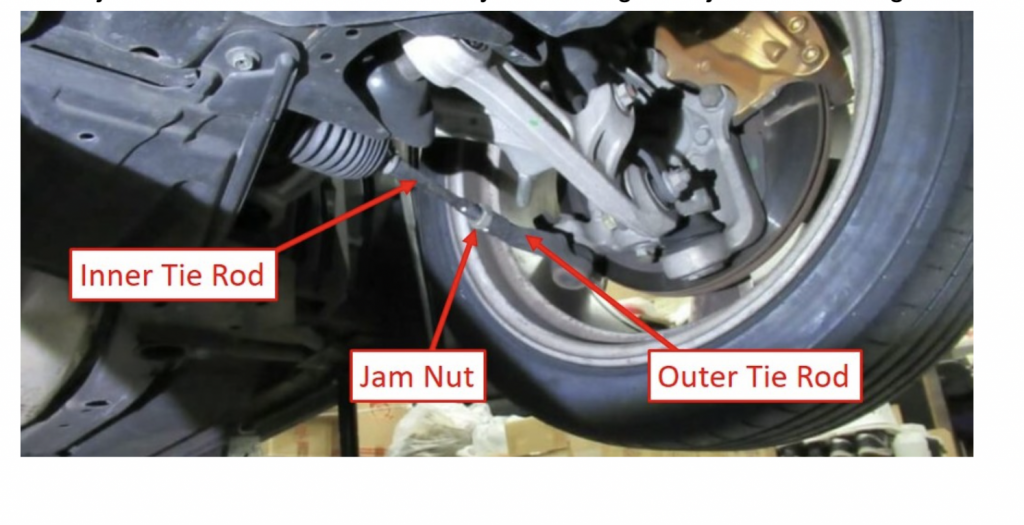 The technician will first loosen the jam nut and then rotate the inner tie rod with a wrench. This shortens or lengthens the tie rod assembly and pushes the outer tie rod outboard or pulls it inboard, steering the wheel slightly and adjusting the toe setting. 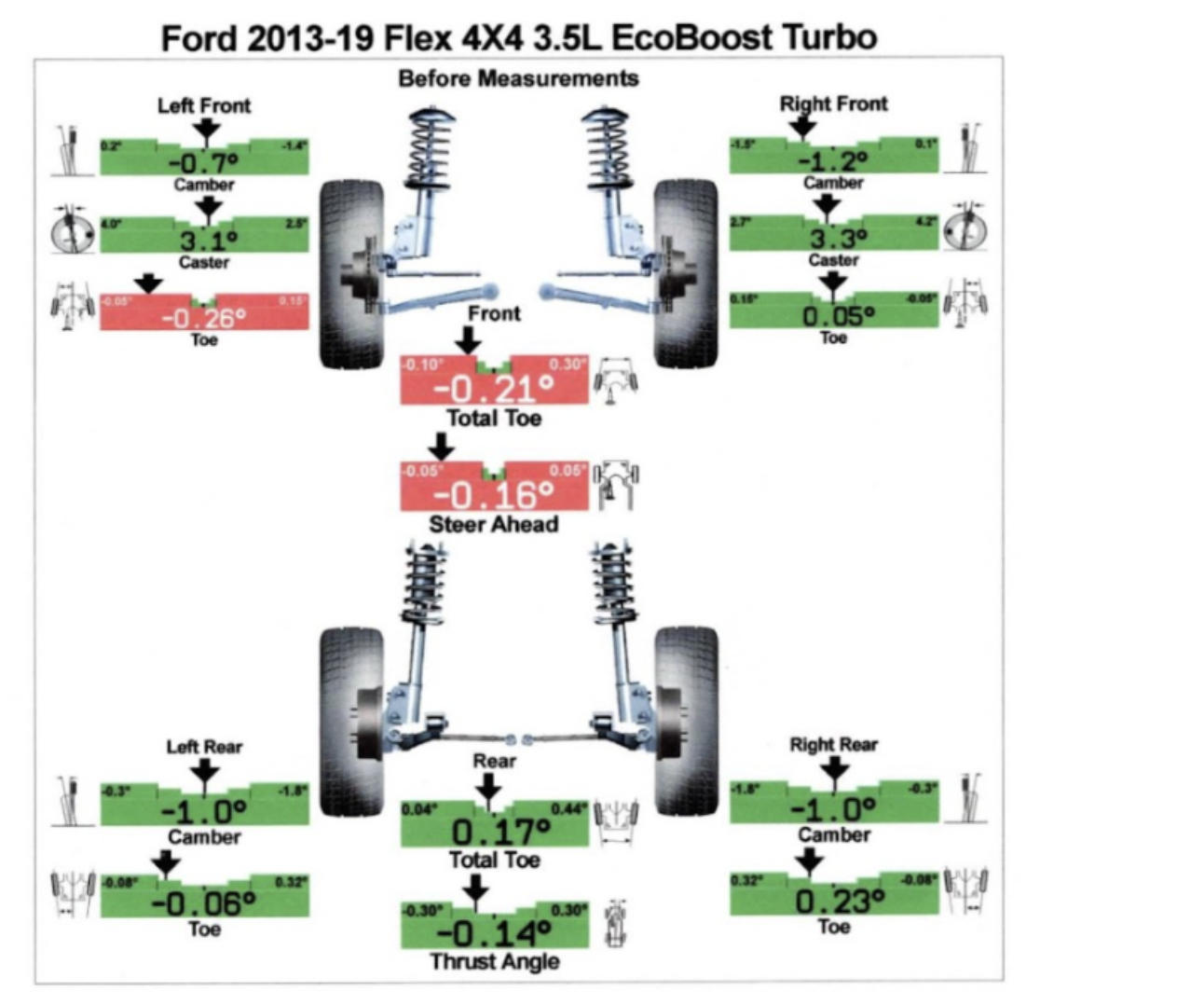 Now let’s get back to my Flex. The before measurements show that most things were within specification except left front toe. Since the left front toe was so far out, it also meant total toe was out and steer ahead was out. The rear actually looked pretty good although thrust angle was starting to go a little too far out. Right front camber was also not great but it wasn’t out of spec. 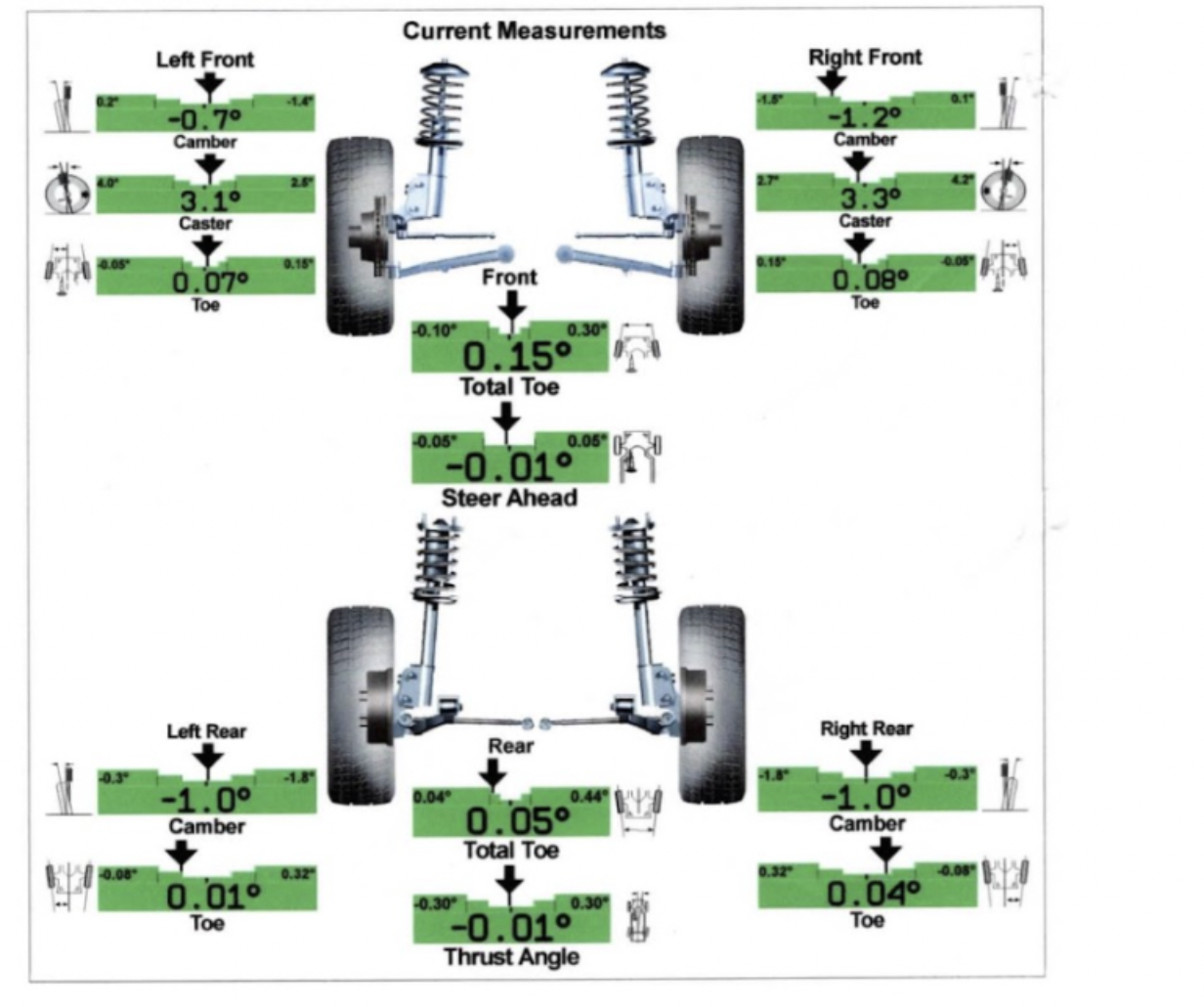 Looking at the current measurements section we can see that the left front toe was adjusted and is now just about perfect. Both left and right rear toe were also adjusted which brought the thrust angle almost exactly to zero and this in combination with fixing the front left toe fixed the steer ahead measurement. Front camber and caster weren’t touched and are still in spec as was rear camber. In all, everything shows green and I was very happy with this result. If I had my choice though, I would have fixed the front camber and I could have asked the shop to fix it but it’s not too bad. Since it was in spec, I would have had to pay another $150 to have it fixed and it wasn’t worth it.

So next time you have your car aligned, tell them when you drop the car off that you want the alignment sheet and then look it over before you pay your bill. The shop will be totally intimidated by your knowledge and give you extra special service the next time you come in. Of course, I could be wrong on that last bit.

I have been an automotive engineer for all 31 years of my career, mostly leading chassis design work. Some fun suspension projects I led: The 2005 Ford GT and 2012 Tesla Model S.
Read All My Posts »
PrevPreviousWhy Mercedes Is Telling Owners Of Nearly 300,000 Cars To Stop Driving Immediately
NextHow A Czech Racing Driver Crammed Two Tires Onto One Wheel In Pursuit Of Ultimate Performance, Inspiring The Famous Goodyear ‘Aquatred’ In The ProcessNext