Why Mercedes Is Telling Owners Of Nearly 300,000 Cars To Stop Driving Immediately 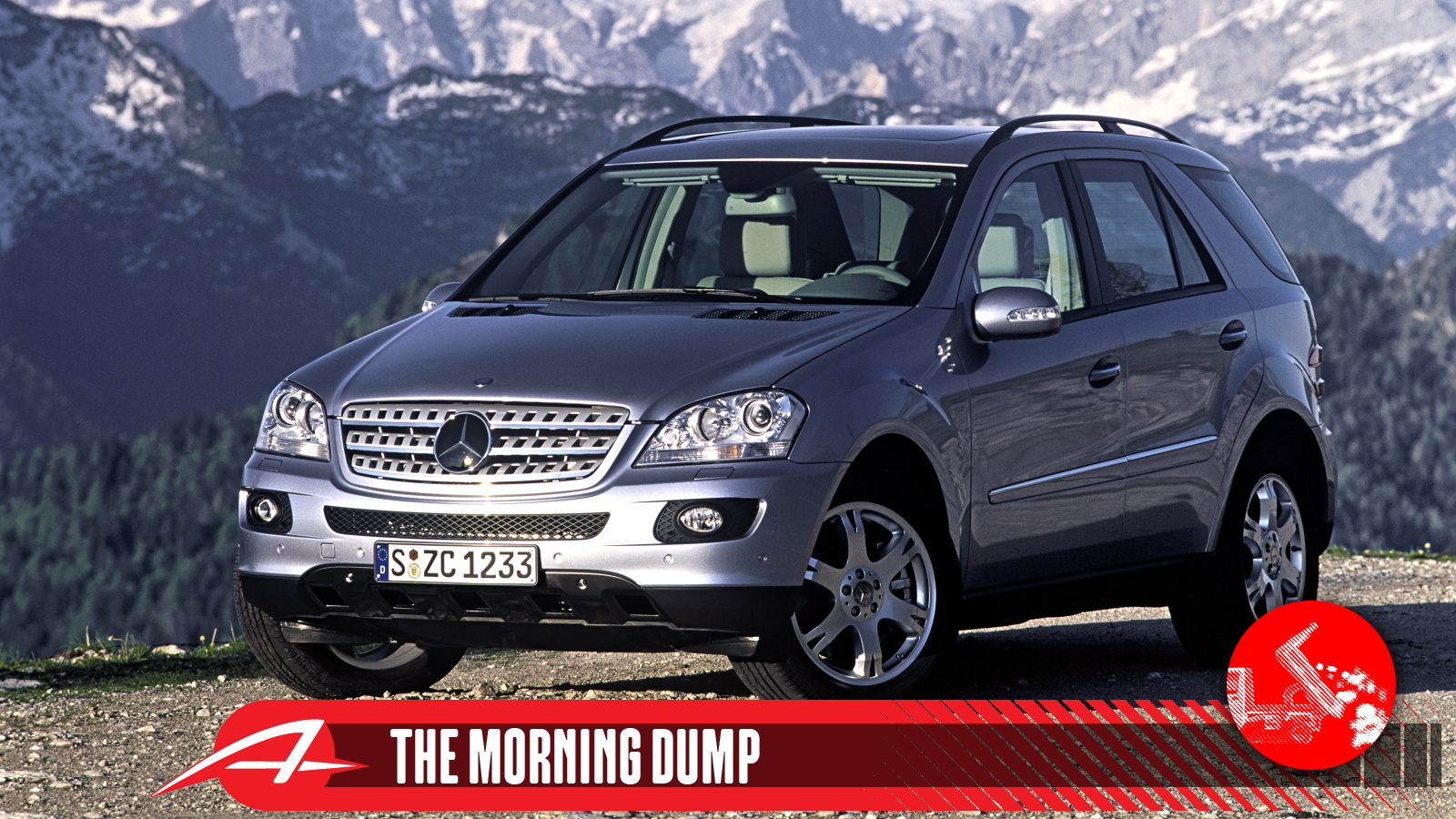 Stop driving most 2006 to 2012 Mercedes SUVs, gawk at the 2023 Subaru Legacy’s new and disproportionate grille, vocalize an indignant harrumph towards the Rolls-Royce Phantom Series II. All this and more on today’s issue of The Morning Dump.

Any good car should be able to go, turn, and stop. Those are the absolute basics. Well, if you own a 2006-2011 Mercedes-Benz ML-Class midsize SUV, 2007-2012 GL-Class three-row SUV, or 2006-2012 R-Class minivan, there’s a chance you’ll lose the last of those basics. See, Mercedes-Benz has recalled 292,287 units of the aforementioned vehicles for poorly-designed brake boosters that could fail altogether. Oh dear.

Hold on a second. Won’t a bad brake booster just increase braking effort required? In most cases, yes. We’re dealing with German shenanigans though. According recall documents, a particularly strong braking event on an affected brake booster in an advanced state of corrosion could sever the connection between the brake pedal and the hydraulic braking system. “In such a very rare case, it would not be possible to decelerate the vehicle via the brake pedal,” Mercedes says in its press release. That, uh, doesn’t sound so good. More likely, though, is a soft pedal and increased braking efforts due to corrosion of the brake booster resulting in a vacuum leak.

Why are these brake boosters corroding so heavily? Apparently moisture can wick under a rubber sleeve on the brake booster. This would be some pretty serious stuff were it to happen on your car, so this recall comes with an advisory to stop driving affected Mercedes-Benz ML-Class, GL-Class and R-Class models. Nearly 300,000 cars. Here’s what the company says about how this will all work:

MBUSA is advising affected customers to stop driving their vehicles. MBUSA will also offer complimentary towing to owners of affected vehicles to attend the workshop. The workshop will remove the rubber brake booster sleeve, inspect the brake booster housing and replace parts as required. In the event a repair would be necessary and cannot be carried out immediately, an authorized Mercedes-Benz dealer will help coordinate an individual solution for the customer, including alternate mobility.

Yeah, this recall is going to really suck for a lot of people. A stop-drive warning during a car shortage where loaners and rentals are scarce is going to screw over anyone who uses their affected Mercedes-Benz as their only vehicle. I know that Merc’s tagline is The Best or Nothing, but I didn’t expect the nothing part of that equation to be so literal. On a positive note, this recall gives us a concrete production number of U.S.-spec Mercedes-Benz R 63 AMG super minivans, a reported 72. Sweet!

The 2023 Subaru Legacy Gets Ugly

Giving a handsome car a mid-cycle refresh is hard. If the design is really good, it may be tempting to change very little. For the mid-cycle refresh of the James Bond-era E38 BMW 7-Series, the stylists changed the headlights, the tail lights, and nothing else under the principle of not messing with a good thing. If the design is sound but a bit stodgy, more dramatic efforts are often required. The only panel carried over from a 2014 Toyota Camry onto a 2015 model was the roof. That level of thoroughness works because it’s cohesive. Whatever Subaru has going on with the 2023 Legacy? That definitely does not work.

See, the 2022 Legacy is a good-looking car. Conservative, sure, but handsome and not overwrought. For 2023, someone must’ve pinned a baleen whale up on the mood board in the design studio because the new front fascia is gopping. The new headlights look great but that new front grille is simply massive and obviously largely blanked-off, a rather incohesive blight on what’s otherwise a very handsome car. It’s like the designers scaled up the grille silhouette of the new WRX to 200 percent, sketched out some basic louvers and then went down to the pub. Oh, and that’s before we get to the Sport model with its red-trimmed grille inlay. While the Sport model does feature Subaru’s turbocharged 2.4-liter flat-four engine, it’s still a big, heavy, CVT-only family sedan.

On the bright side, an updated infotainment system with wireless Apple CarPlay and Android Auto sounds nice and the available heated steering wheel now heats the entire circumference of the wheel. Sometimes little things can really make a difference. The updated Legacy also gets the Eyesight driver assist suite upgrades from the new Outback, which have a chance of making Subaru’s nannies less prone to false-positives and more adept at detecting obstacles. Expect the new Legacy to arrive in dealerships this fall. We’d be surprised if the needle moves significantly for pricing, but we’ll likely know for sure closer to the new Legacy’s on-sale date.

Come on, did you really think that Ford and Shelby could produce a new GT500 without Hertz getting its hands on some? Yes, Hertz has acquired 25 GT500-H Mustangs from Shelby for holidaymakers to create some memories in. So what makes the GT500-H special? Well, how about a bigger supercharger? The stock Eaton TVS R2650 gets ditched in favor of a properly big 3.8-liter Whipple twin-screw supercharger. Horsepower? Allegedly more than 900. Ooh yes, this should be very quick indeed.

Other touches include a Borla cat-back exhaust system, tinted windows, unique 20-inch wheels, a new hood with extra vents, illuminated door sills, and more Shelby emblems than a V6 muscle car meet. For $399 a day, the GT500-H comes with a 70-mile daily restriction. It’s a bit of a bummer until you realize that’s a restriction of 280 quarter-miles, at which point things could get fun. Find one at Hertz locations in three states: Tampa, Orlando, Miami, and Fort Myers in Florida; Las Vegas in Nevada; and Phoenix in Arizona. Then, try not to get the cops called on you. Knowing Hertz, it might happen anyway even if you don’t do anything wrong.

It genuinely doesn’t feel like it’s been five years since the current Rolls-Royce Phantom debuted, but here we are. As such, the famed luxury brand had several years of customer feedback to pull from when updating the Phantom, and customers must’ve liked it because not much has changed. Hey, planned obsolescence was never really Rolls-Royce’s bag.

The biggest visual update to the Phantom Series II is the availability of these amazing dinner plate alloy wheels. They just have so much presence and don’t fall into the horrible cliché of black wheels with machined faces. Should you be incredibly wealthy and have no taste, don’t worry. Rolls-Royce has you covered with a brand new set of black wheels with machined faces. Ah. Anyway, the Phantom Series II’s grille is slightly redesigned to add a nice horizontal chrome strip between the daytime running lights and more prominently feature the Spirit of Ecstasy hood ornament and Rolls-Royce “Badge of Honour” (seriously) from the front. Those changes may be imperceptible to the average person, but the new grille illumination should draw a stare or too. I’m not a huge fan of illuminated grilles, but it seems like Rolls-Royce and exercised its typical restraint and produced the only tasteful illuminated grille in the history of the world. Good job guys.

Finishing off the visual package is a starlight element in each headlight, adding an unusual dose of whimsy. Whimsy? In a Rolls-Royce? Stranger things have happened. Inside the Phantom Series II, the steering wheel is slightly thicker than on the old car and a new telematics system can send navigation directions from the owner’s smartphone to the car. Maybe it’s just me, but there’s something hilarious about an Internet of Things-connected Rolls-Royce as IoT is the opposite of timeless. Oh well. Anyway, the Phantom Series II should serve the rich and famous well. Pricing and timing haven’t been released, but they’re largely irrelevant figures. The type of person buying a Phantom Series II doesn’t care about how much it costs and can most likely wait for delivery.

Whelp, time to drop the lid on this edition of The Morning Dump. Between the questionably-styled facelifted Legacy, the rather frumpy new WRX and the Plastic Cladding R Us Wilderness lineup, I really wonder where Subaru’s going. It seems to be a brand with no clear vision, wandering in circles amped up on hallucinations of focus group feedback and aggressively mid vibes. While the electric revolution will likely serve Subaru well considering it never really could build a great engine, I wonder if the Japanese peddler of all-wheel-drive passenger cars will lose even more quirkiness in the process. So, let’s say you were in charge of Subaru and could do basically anything you want. What would you do?

Thomas is a Nu Rave-blaring, heel-toe downshifting, maple syrup-swilling, chassis-geeking, junkyard parts-hauling, floppy-haired scenester who's been writing about cars since college. His current ride is a 2006 BMW 325i with the six-speed manual gearbox. Instagram: @thomas.hundal Twitter: @thomashundal
Read All My Posts »
PrevPreviousSubaru, Jeep, Buick, or Dodge: Which Bad-Luck-Mobile Is For You?
NextHow An Alignment Works And Why Your Car Even Needs One In The First Place: Musings From A Suspension EngineerNext