I have been the single worst owner my 1979 Jeep Cherokee Golden Eagle has ever had. I have failed it in every conceivable way, not just through neglect, but through genuine stupidity. I have destroyed two perfectly-good engines without driving the vehicle more than 20 miles, and for that to happen requires a level of foolishness I didn’t know I had in me. But I do, and now I need to get this off my chest and tell you about how I have failed one of the most beautiful Jeeps ever made.

How did this even happen? I bought my 1979 Jeep Cherokee Golden Eagle five years ago. The vehicle actually ran and drove just fine, aside from its propensity to stall under load, though this was probably just an ignition timing issue. Just listen to this thing idle!:

Honestly, an hour of basic tinkering, and that thing should have been humming down Woodward Avenue, sucking down gas like semi truck. But that’s not what happened. 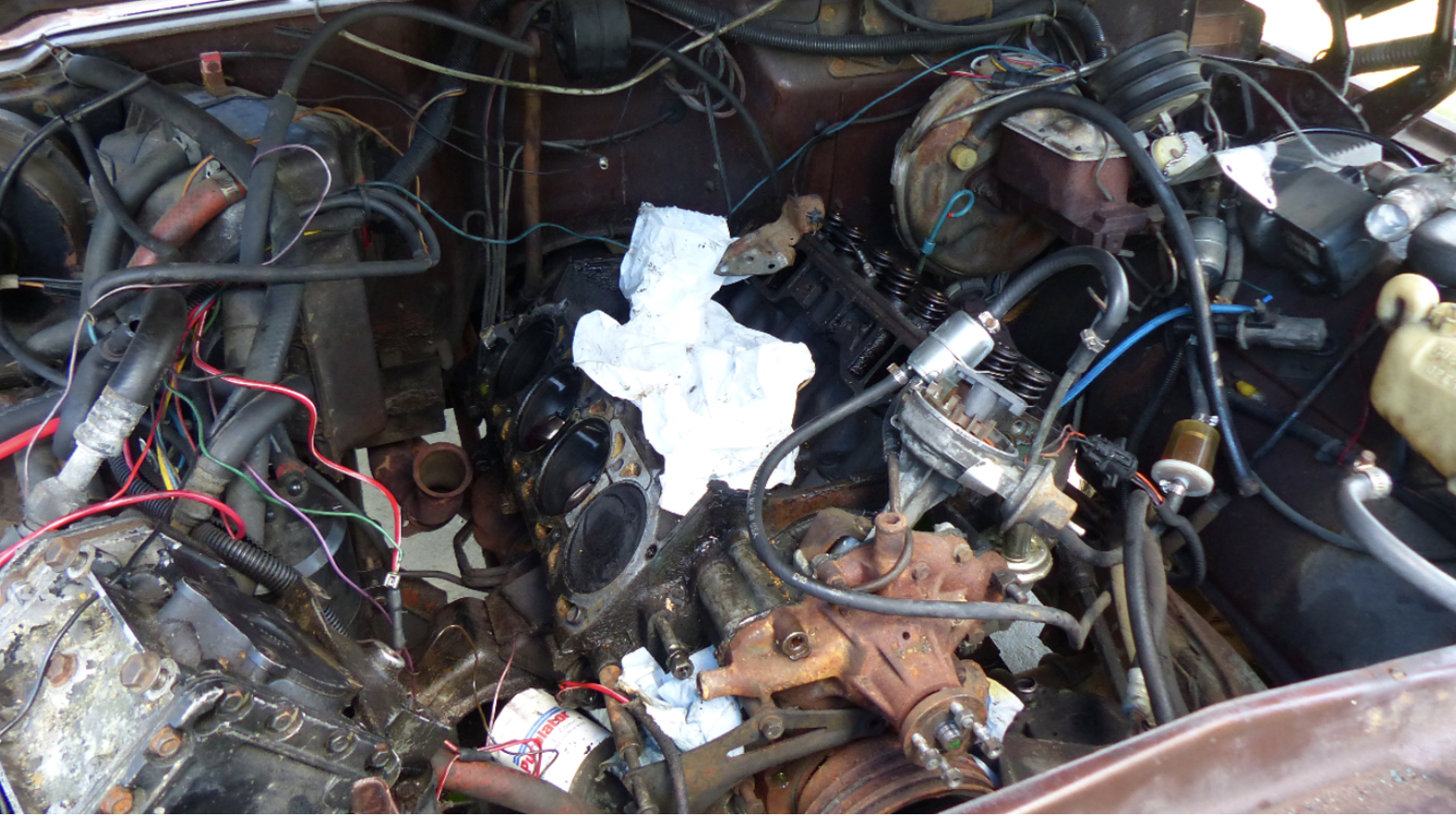 I noticed that there was an exhaust bolt broken in the cylinder head, and — keen to fix the resulting exhaust leak — I decided to remove the engine’s passenger’s-side cylinder head. I took it to a shop, who extracted the broken bolt, and then I should have reinstall the head and driven off into the sunset. Instead I flew to Germany for a month to hang out with my family; during that time, the saran wrap I’d placed over my exposed cylinders blew away, and by the time I returned from Germany, the cylinders were rusted. 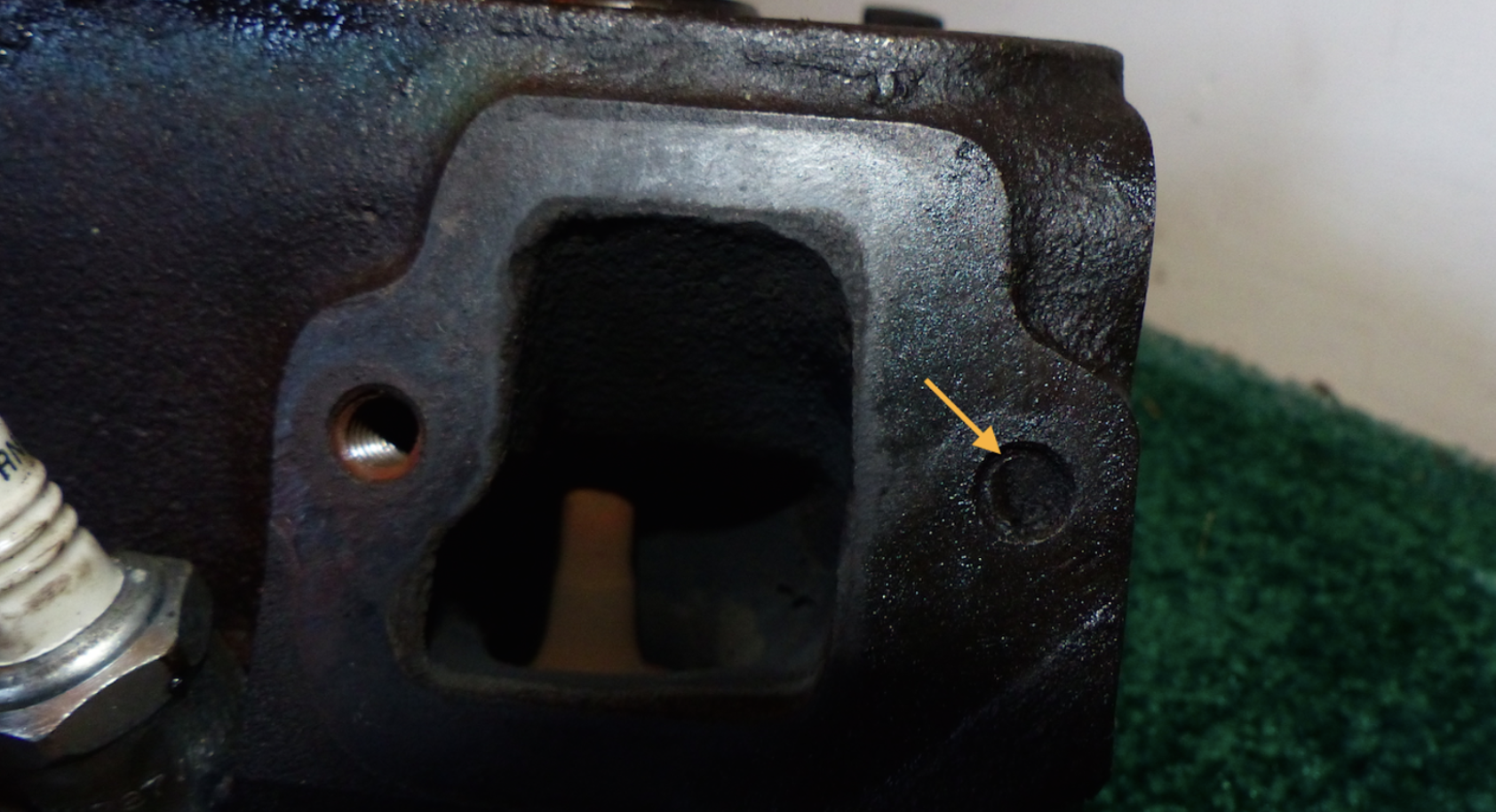 I should have just run the engine anyway. That light surface rust was probably not a big deal. Maybe it’d have been smart to vacuum out any dirt particles that may have made it into the cylinders, but other than that, I should have run that AMC 360 and enjoyed the beautiful Jeep’s comfortable ride and burbly exhaust note.

But I didn’t do that. Instead I chose to remove the whole damn engine so I could hone the rust off the cylinder walls. “You know what, the ridge on the cylinder walls doesn’t look good anyway,” so let me just take this whole motor apart and replace bearings/rings. Then, for some reason, I couldn’t get the pistons to go back into the cylinders without locking up the motor.

I checked ring end-gaps and even used the old rings: The motor just wouldn’t go back together. To this day, I’m baffled by the whole thing, and while I know my friends and I would have solved this eventually (how can you not just put a motor back together the way it was before? Come on, DT, that’s not rocket science), the fact is that the city of Troy was on my ass.

So I had to act fast. I bought a freshly-rebuilt AMC 360 from a friend of a friend. It was complete aside from the high-flow oil pump he took off for his other engine.

In installed a new oil pump, threw the motor in, and fired it up. Things seemed fine at first; the engine sounded good. I turned the Jeep towards Woodward Avenue and had a wonderful cruise to my favorite diner, Hunter House. Then I began hearing top-end knocking.

I drove home, removed the valve covers, and noticed that there was no oil flowing to the top of the engine. Bizarre. I threaded a mechanical gauge into my oil filter adaptor: 40psi (see below) while warm; not bad! Why the hell wasn’t I getting oil to the top of my motor, then? 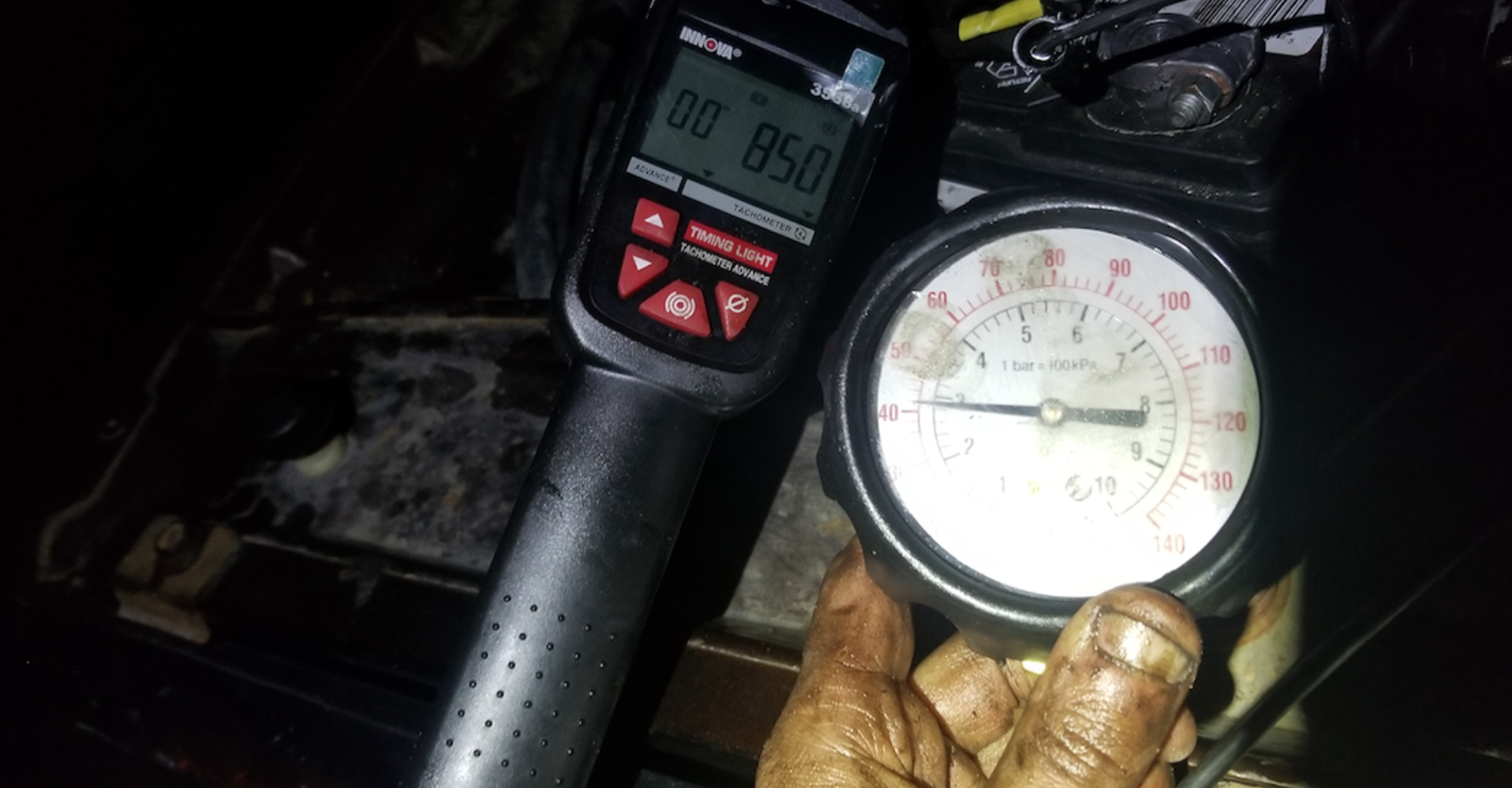 Well, folks, it appears I have figured that out. After neglecting the problematic motor for so long, I just began wrenching on it again this past weekend, and what did I discover? It’s seized.

I don’t think it’s the rings, either. I think there’s something wrong with the camshaft bearings. I think somehow there’s a blockage in the cam bearings’ oil passages that would normally feed the lifters and the top of the motor. The bearing could be locking the camshaft in place, and since the camshaft and crankshaft are connected via the timing chain, I’m unable to move the crankshaft by hand; this thing really is stuck.

If I had to guess, my foolishness in not priming my new oil pump led to an oil starvation issue during my initial start, causing the camshaft to eat one of its bearings, starving the top of the motor of oil, leading to top-end knocking.

Anyway, this is bad news. I now have to remove the new engine from the Jeep, and see what I’ll have to do to save it.

In any case, I’ve now basically destroyed two engines, all without driving the Jeep more than a few miles up and down Woodward Avenue. I’m ashamed of this, because it’s a product of my own poor decision making. I shouldn’t have left the engine so poorly protected while I was traveling, I shouldn’t have remove the engine due to minor surface rust, I shouldn’t have torn the whole thing down, I shouldn’t have thrown a new oil pump into my refreshed engine without checking its clearances, I shouldn’t have run that motor without first priming the pump so that the important engine components receive lubrication at the first engine start-up in a while.

I have been a terrible owner for this Jeep; I’ve got too much shit going on all the time, between travel and city ordinances and writing and wrenching on other things. Focusing my thoughts in 100 different directions has led me to make decisions that caused this Jeep to languish in my driveway for five years. The Jeep gods will never forgive me, so I will have to prepare myself to live in Jeep Hell with the two-wheel drive Compasses and Patriots. I brought it upon myself.

Rust-loving Jeep man, cofounder and EIC of The Autopian, Jason's friend. Email: david@autopian.com
Read All My Posts »
PrevPreviousThis 1906 ‘Magic Lantern’ Show May Be The First Car Movie
NextWhy Flashing Brake Lights Are The Cheap Safety Feature You Never Knew You Needed, And Why They’re Banned From The U.S.Next