This 1906 ‘Magic Lantern’ Show May Be The First Car Movie

Long before The Fast and Furious series flung nearly-indestructible meatheads at the screen in cars with 36 different automatic gear ratios to shift between and mumbling about how important “fambly” is, there has been a rich history of cars and visual entertainment. People just like watching cars on screens. It seems this fundamental rule about humankind was discovered earlier than you may think, as the first cars-on-screen entertainment property seems to be from 1906. And the main character is a guy with the hilarious name of Mr.Spurt.

This first car-on-screen entertainment I suppose can’t really be considered a movie because while it’s composed of pictures, they’re not really moving pictures. No, this first automotive-focused visual entertainment was a series of magic lantern slides called “Mr.Spurt and His Auto.”

I know a lot of you like to have the most updated audio-visual technology and are younger than 150 years old, so you may not be familiar with what a magic lantern is. The best even remotely-modern analogous device is the slide projector. A magic lantern is essentially a pre-electrical slide projector that uses (usually) hand-painted glass slides, a series of lenses, and some light source (like an oil lamp) to project an image on a screen.

Magic lanterns were invented by – get this – the same guy who discovered the largest moon in the solar system, Saturn’s moon Titan, and the guy who figured out that a pendulum could be used to regulate a clock, the Dutch scientist Christiaan Huygens, way back in 1659. So this is old tech.

Here’s a good video about magic lanterns and the remarkable and clever way they were used to show images, even mechanically-animated ones, in the 1700s and 1800s:

Okay, so, that was the medium for this early bit of automotive entertainment: a series of slides, sold commercially, for use in magic lantern shows. These slides were created by an artist named Joseph Boggs Beale, who used a technique where he would create a series of paintings for the slides, then photographing the paintings and using the negatives to print multiple copies, sometimes hundreds or thousands, through the company he worked for, C.W. Briggs.

Beale was the most prolific of magic lantern artists, and developed a lot of ideas that would become crucial to the art of cinema: storyboarding (essentially, these slide series are storyboards, just very well executed), lighting, scene design, and so on.

Let’s look at the Mr.Spurt and His Auto series specifically, because I should remember this is a car website. It’s a series of eight slides, showing Mr.Spurt and his wife buying a car, then going for an eventful drive. Here they are in full: 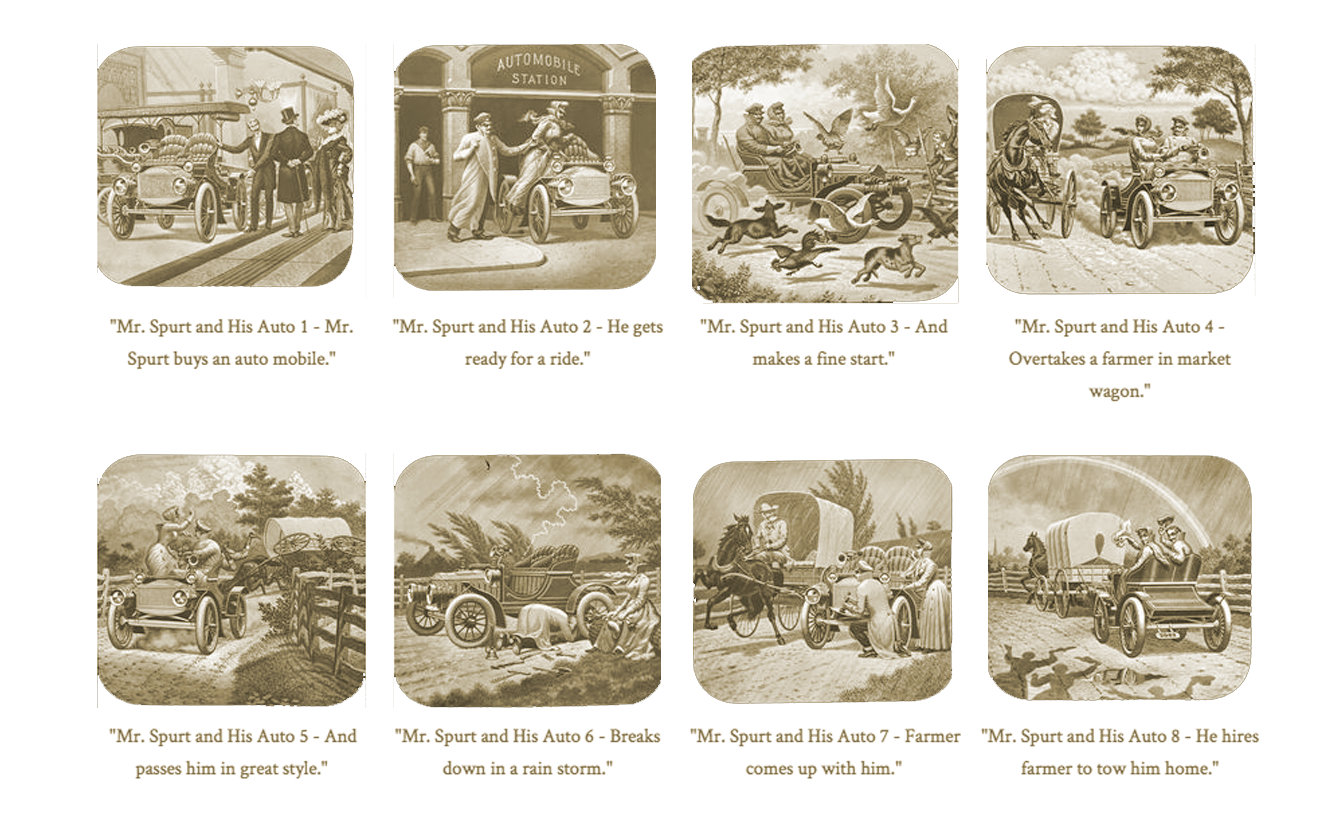 While most often reproduced in monochrome, sometimes the slides would be hand-colored, so you could have a full-color immersive experience: 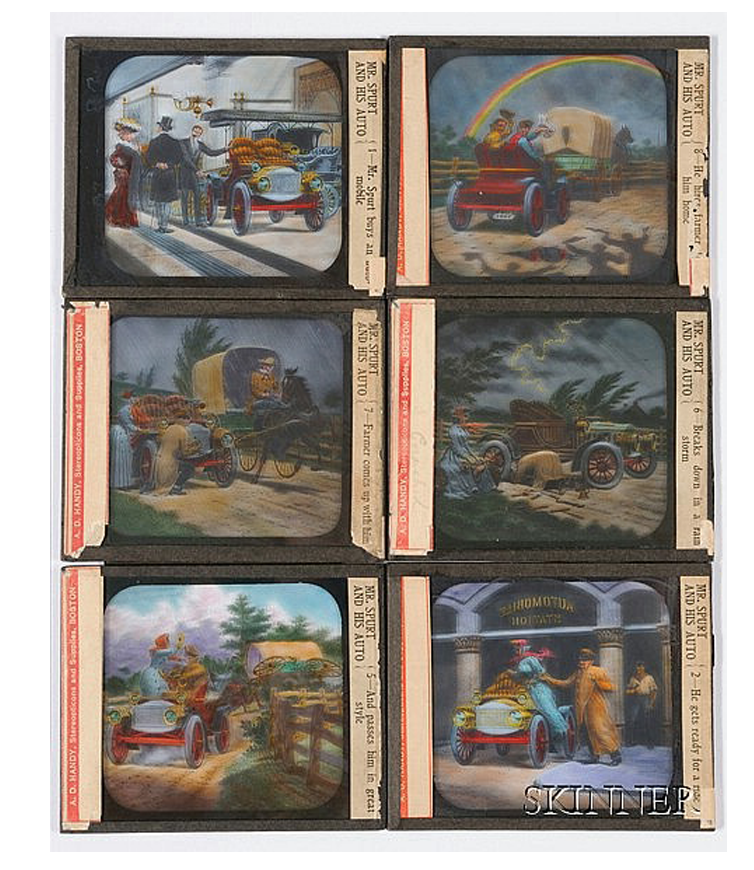 The story that’s told in these eight slides isn’t too complicated, but it does have an actual narrative arc. It starts with the Spurts (giggle) going to a fancy showroom to buy a car, a two-seat open car with large acetylene headlamps, a transverse leaf spring front suspension, and a pretty wide radiator grille, for the era.

The make of car isn’t clear, and I don’t think it’s intended to represent any specific car, but is rather a carefully-considered composite of many cars of the early 1900s. Based on the Spurts’ mode of dress and the ornate dealership there, it’s likely intended to be a pretty expensive car.

Then he leaves the dealership – which seems to be called Automotive Station – and heads off on a drive, in full motoring gear. Long cloaks, goggles, all that stuff you need when you’re essentially driving a park bench with an engine. 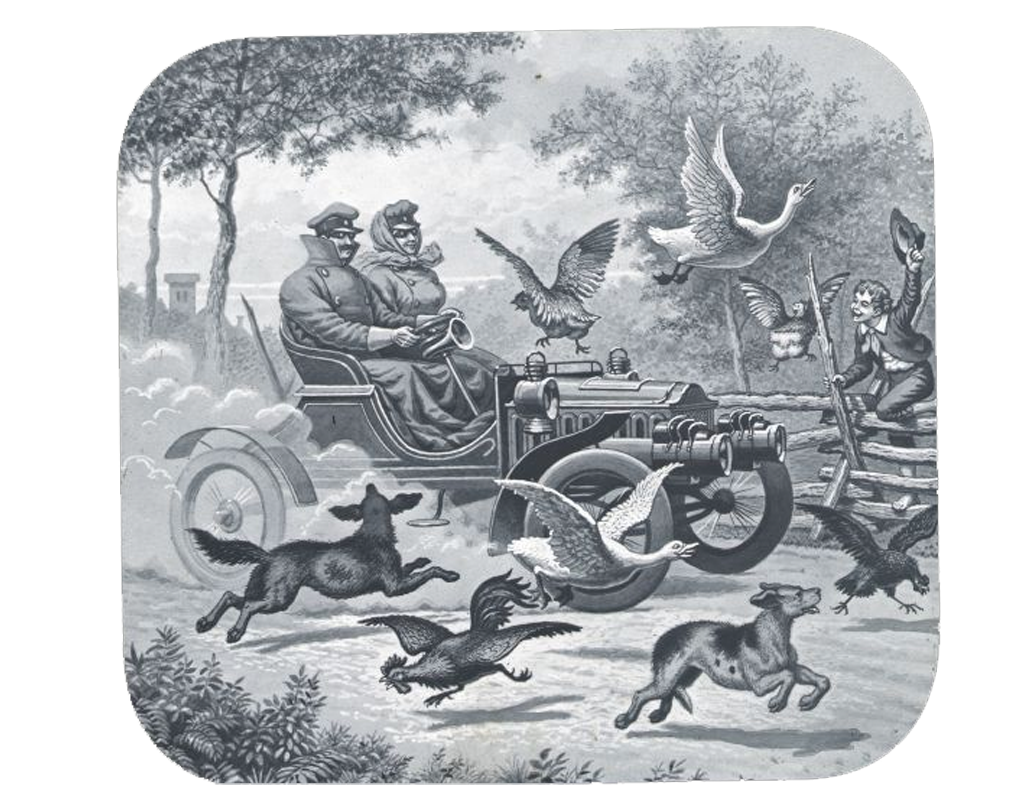 In slide three, we see the Spurts tearing ass down a road – Mr. Spurt seems to be a competent driver – surrounded by a surprising amount of animals – are they driving through a petting zoo?

Then Mr. Spurt drives past a farmer in a horse-drawn wagon, scaring the horse, which eventually leads to what looks like a pretty significant wreck, which Mr.Spurt just keeps driving from, confirming your suspicions that yes, Mr.Spurt is a dick. 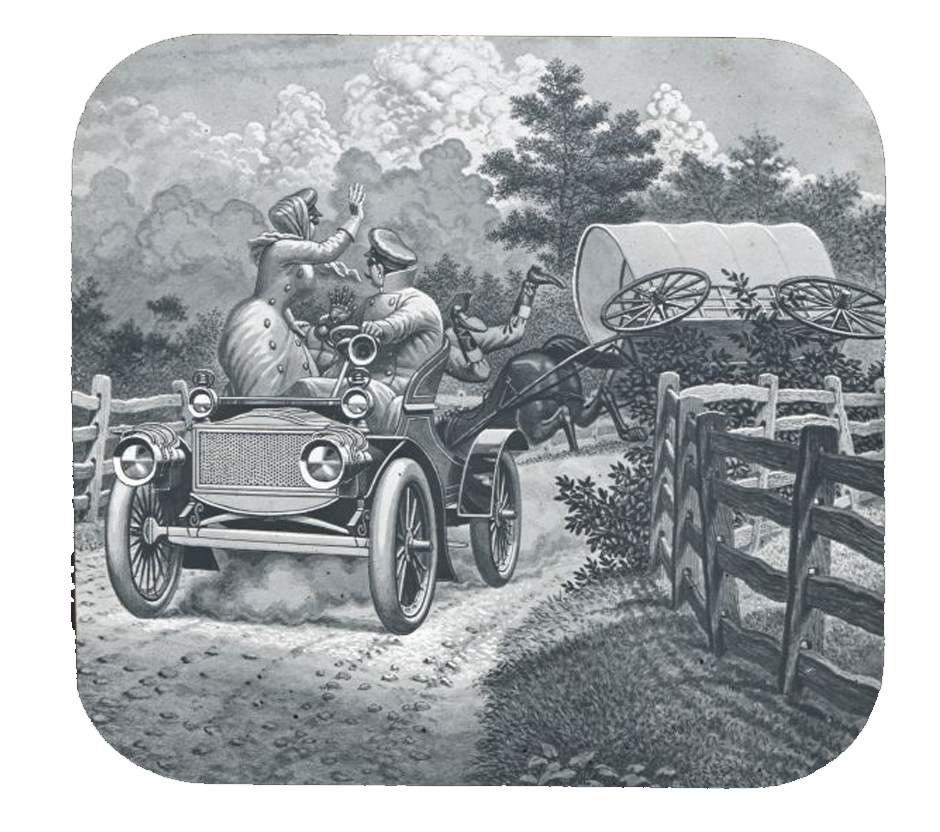 Of course, karma is watching, so Mr.Spurt gets his as his fancy new car breaks down, and he has to try and fix it, in a thunderstorm: 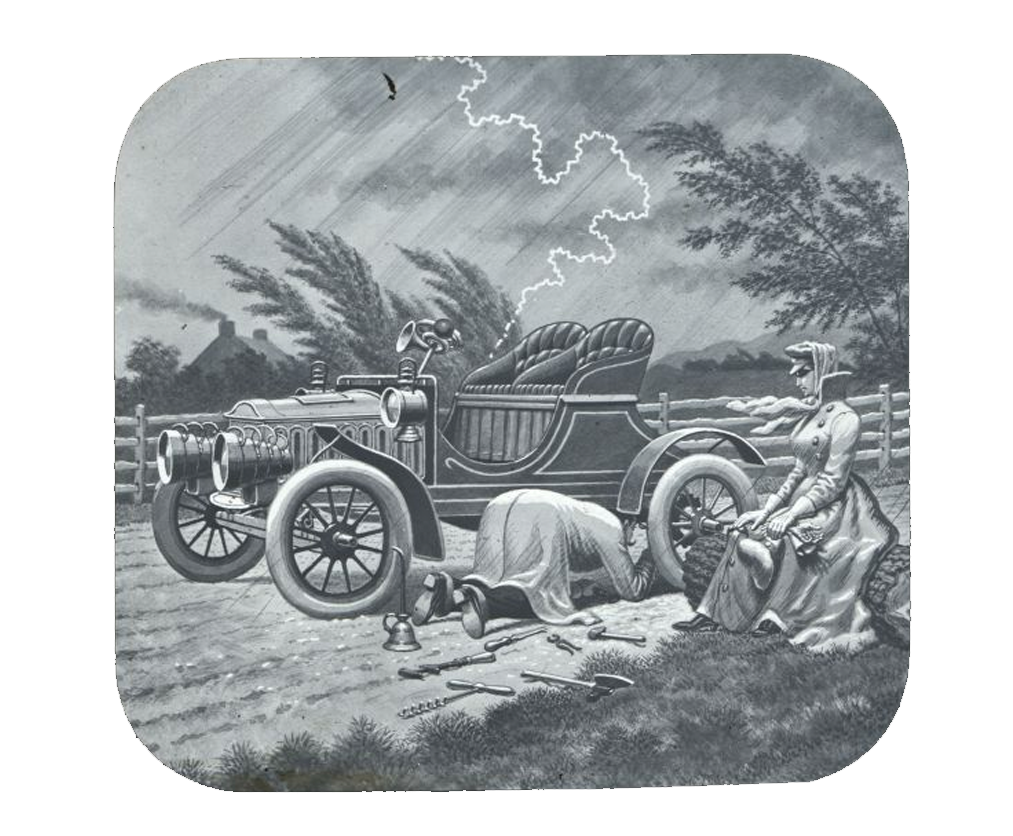 The series ends with Mr. and Mrs.Spurt being towed back into town by the farmer, who has presumably forgiven them for almost killing him or has been paid enough for him to feign forgiveness. There’s also the shadows of figures waving to the Spurts as they get towed back. Who the hell are they and where did they come from? Are they meant to represent us, the viewing audience? Maybe? If so, that’s a pretty clever bit of fourth-wall breaking there. 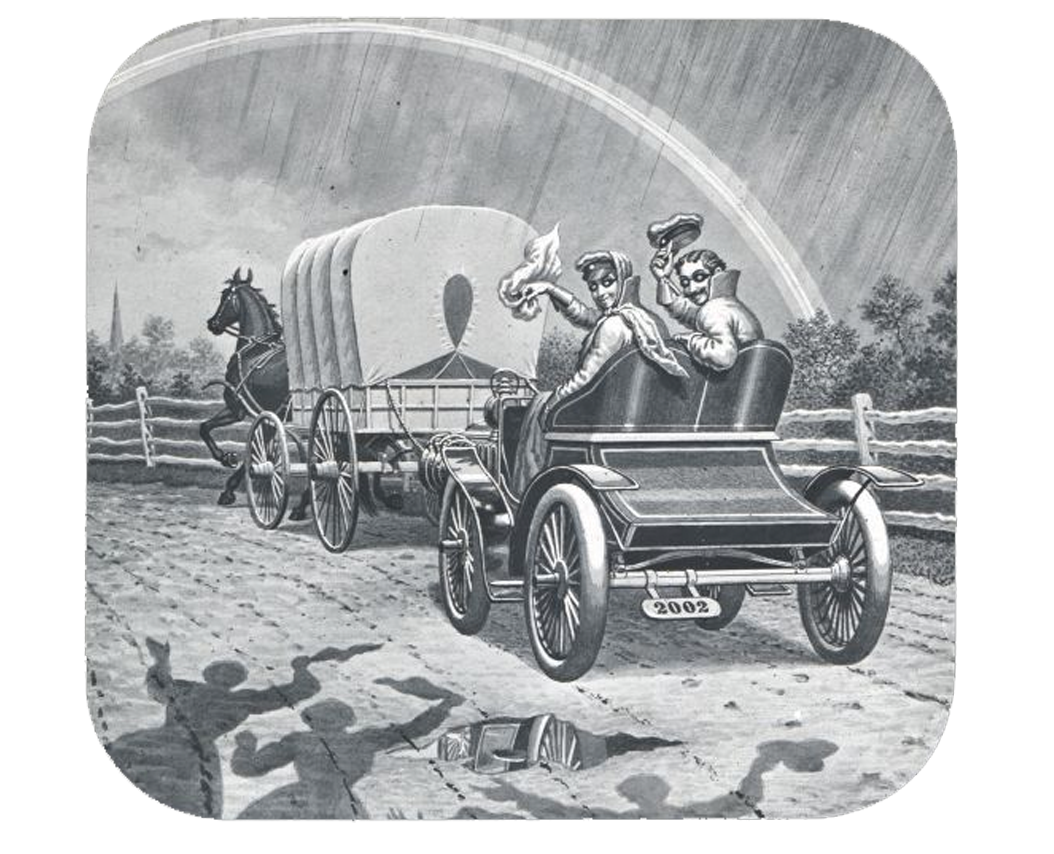 The Henry Ford Museum has the full set of these slides in their collection, and includes some nice-sized reproductions on their website so you can see just how much care was taken in the production of these by Mr. Beale: 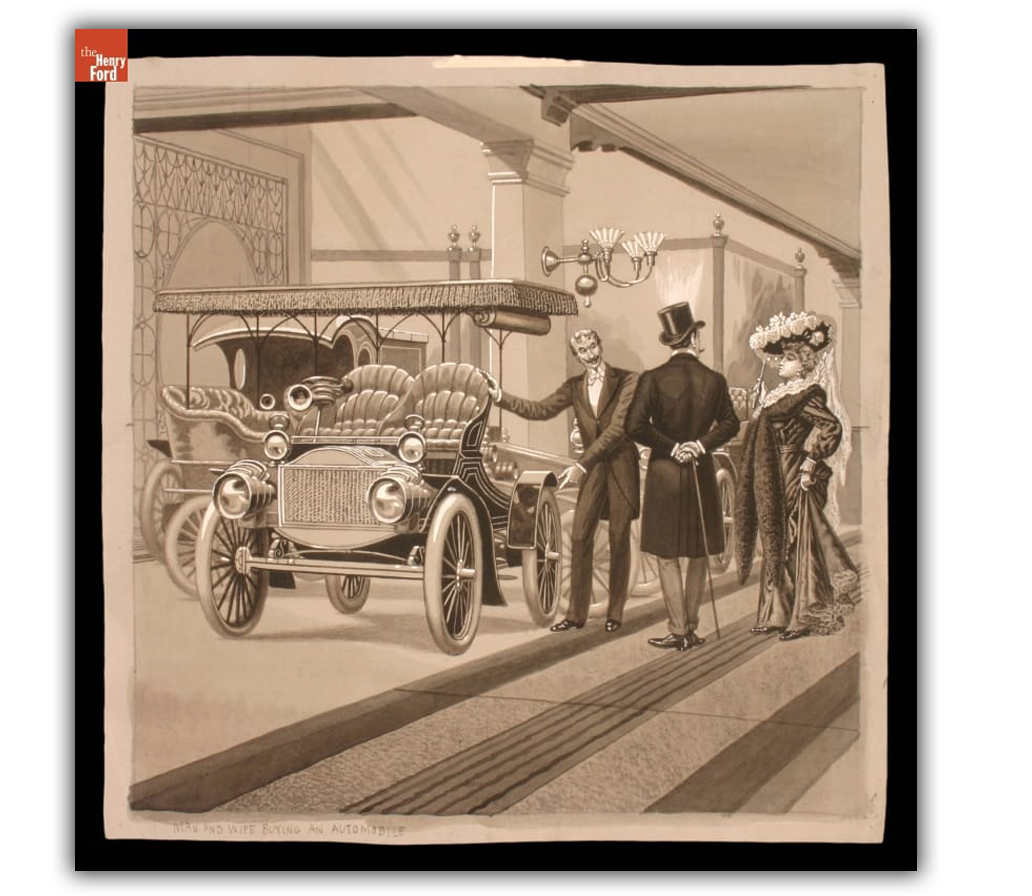 The artwork is clearly top-notch for these, and you can see why people would have been so drawn to these sorts of magic lantern shows in the time before actual moving pictures.

The story and way automobile ownership is treated here is interesting as well; Ford’s Model T didn’t arrive until two years after this, in 1908, and while there were some relatively affordable automobiles on the market prior to this (like the 1901 Curved Dash Oldsmobile) they weren’t particularly common, and automobile ownership was still largely the domain of the wealthy, hence the socio-economic status of the Spurts.

That’s also why the Spurts end up somewhat humbled, since magic lantern shows were accessible to most socio-economic classes, many of whom may want to see some rich people have a shitty day for a change.

Before I leave you to ponder the Spurts in the larger context of the past 100 plus years of car-based entertainment, here’s something that I’m not sure has existed before: this magic lantern show, converted to GIF format:

I'm a co-founder of the Autopian, the site you're on RIGHT NOW! I'm here to talk to you about taillights until you cry and beg me to stop, which I absolutely will not. Sorry. Hug? Also, David's friend.
Read All My Posts »
PrevPreviousThe Tesla Model S Gets Recalled For Weird Overheating Problems
NextHow I Managed To Destroy Two Engines Without Driving My 1979 Jeep Cherokee Golden Eagle More Than 20 MilesNext