The Tesla Model S Gets Recalled For Weird Overheating Problems 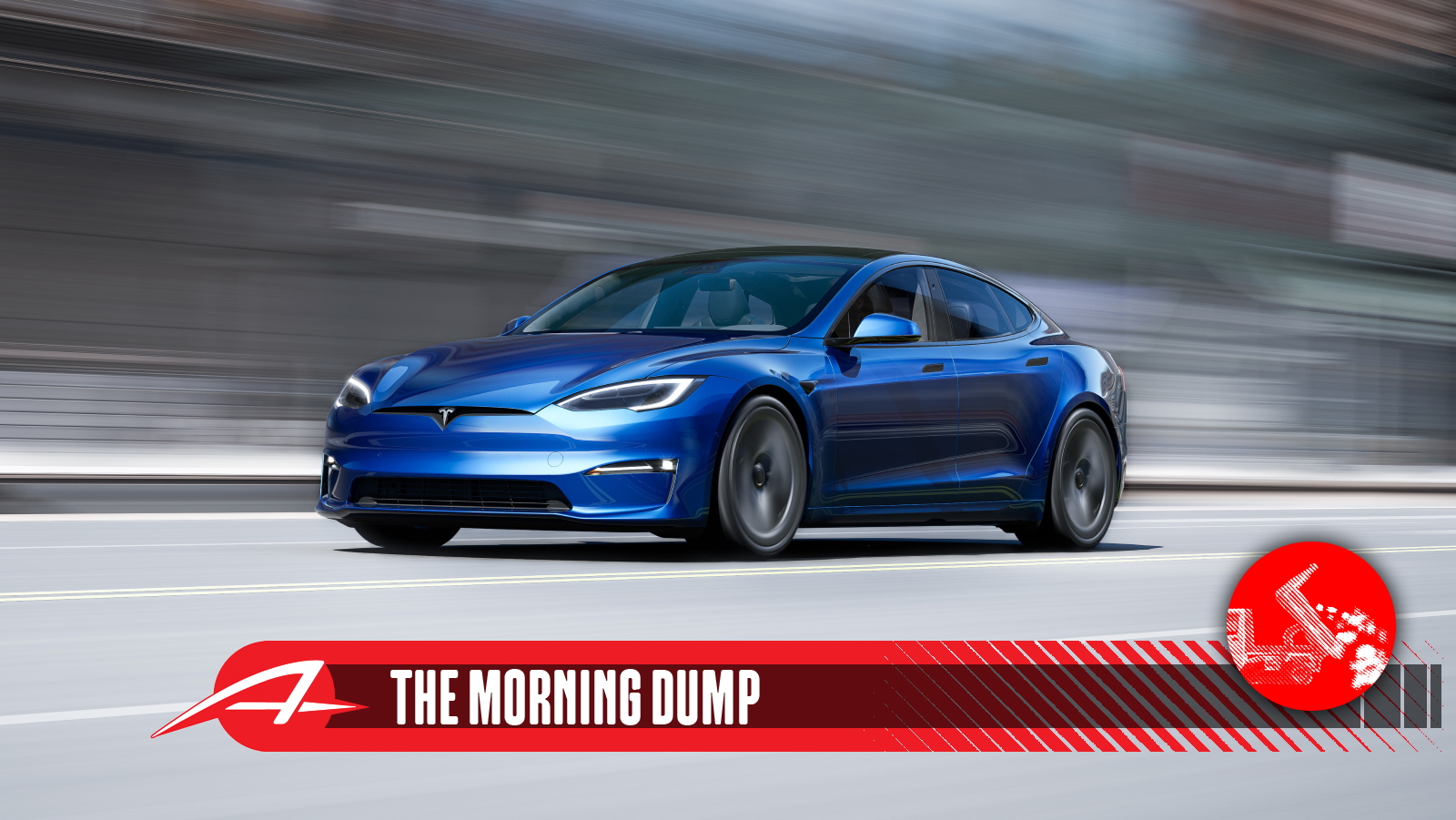 Tesla infotainment systems run into another snag, Rivian’s having a bad time, Bentley looks down on us poors. All this and more on today’s issue of The Morning Dump.

There are many things you could expect to overheat on a car, from tires to coolant to gearbox fluid. However, Tesla’s come up with a new overheating problem as some of its infotainment systems may overheat during fast charging. Yes, the infotainment. Now how the hell did they manage that?

According to recall documents, the problem traces back to crappy infotainment firmware on 2022 Model 3 compact sedans, 2022 Model Y as in “Y is this thing so bulbous?” compact crossovers, 2021-2022 Model S large sedans and 2021-2022 Model X gullwing-doored crossovers. What’s the failure mode like? During fast-charging pre-conditioning or fast charging itself, the infotainment processor might overheat badly enough to cause the display screen to lag or reboot. Now, this is definitely an annoyance regarding functions like climate control and speed, but some of the stuff displayed is a little more critical.

For instance, the gear display on a Model 3 is on the touchscreen. I know that the car’s Mercedes-style e-shifter has been around in various forms for years now, but a visual reminder of current gear selection is still necessary to prevent drivers from running into stuff and/or running themselves over. Speaking of running stuff over, it would be nice if the backup camera stayed operational considering Tesla’s lack of rear cross-traffic alert. Other things run through the touchscreen on certain models include warning lights and wiper settings, mildly important stuff that verges more on annoying than anything. Fortunately, there is a fix on its way. An over-the-air update pushed to all 129,960 affected vehicles is expected to clear these wonky firmware issues up and fix the infotainment screens. Until then, it’s best to be careful with Tesla infotainment.

Six months ago, Rivian was on top of the world. Between impressive vehicle performance figures, fantastic reviews, promises of mass deliveries, relatively good value for a premium electric truck, and a massive IPO, the electric truck company’s stock was trading for $179.47 on Nov. 16, 2021. Let’s just say that this winning streak didn’t last for long, as the hits just keep on coming.

See, Rivian was trading for $22.70 pre-market today, that’s an 87.35 percent decline since peak. So what’s been happening that’s hammering the electric truck company’s value? Well, we know about supply issues and the somewhat scummy price hikes to existing orders that eventually got walked back, but the latest decline in value comes from the potential of early investors pulling out. Rivian’s IPO stock lockup period expired on Sunday, so early investors like Ford and Amazon now have time to contemplate their next moves. What is an IPO lockup? It’s a contract provision so that when a company goes public, pre-IPO investors are prohibited from selling shares for a certain time after the initial public offering. With 180 days as a typical lockup period, now’s the chance for companies like Ford to sell shares, perhaps sooner rather than later. According to a CNBC report, the Dearborn-based peddler of Mustangs and F-150s might be planning to dump eight million shares of Rivian, potentially in advance of Rivian’s first-quarter financial report on Wednesday. Then again, Ford’s lips are sealed. In an email to Bloomberg, Ford refused to comment on the Rivian situation. I guess we’ll just have to hold tight and see what happens.

With the uber-luxe SUV segment running as hot as certain aforementioned Tesla infotainment processors, Bentley’s decided to gun for the Mercedes-Maybach GLS and Rolls-Royce Cullinan in the rear seat department. The new Bentayga Extended Wheelbase stretches out the Bentayga’s length by 180 mm (7.09 inches) to allow for a true ultra-premium rear seat experience.

If I’m being perfectly honest, I’m not entirely sure who gets driven around in cars these days. Sure, there are a few celebrities and old-money types who are willing to employ a chauffeur, but the majority of luxury car owners drive themselves. Still, it’s nice to see Bentley upping the Bentayga’s baller factory with a properly fancy rear seat package. Called Airline Seat Specification, both of these top-spec rear thrones feature 22-way adjustment and up to 40 degrees of maximum recline. More importantly, the seats have their own automatic climate control. No, not auto climate for the second row, auto climate for the individual seats. According to Bentley’s press release, the seats can sense the temperature of the occupant and surface humidity (butt sweat) to vary the mix of seat heating and ventilation. Is it overkill? Probably, but isn’t that the definition of luxury? In addition, the top-spec rear seats feature 177 varying pressure points each to enhance comfort on long journeys and a business mode with deployed footrests and an upright backrest to get more business done on the go.

In addition to luxury rear seats, the Bentayga Extended Wheelbase is available with some interesting tech. Four-wheel-steering is on offer, as is Bentley Diamond Illumination which shines ambient lighting through perforations in the door card leather and a claimed 24 billion different trim combinations. Weirdly enough though, UK availability isn’t an option right now. I get that parking this behemoth outside the Groucho Club sounds like a bear, but come on. Imagine the presence. Should you happen to be the old-money type who has a chauffeur and wants something high-riding, the Bentayga Extended wheelbase is available to order now for an undisclosed sum. For the rest of us, expect this cushy luxury SUV to appear on buy-here-pay-here lots sometime around 2037.

Rimac And Hyundai Still Have It Going On

Contrary to prior reports of a split between Rimac and Hyundai, Mate Rimac fired up Facebook to let everyone know that the Croatian-Korean collaboration is still going on and that reports to the contrary are “fake-news.” In addition, Hyundai has spoken with German publication Auto, Motor, Und Sport to confirm that the collaboration is still going on. Everyone waiting with bated breath to see the next fruit of Hyundai and Rimac can breathe a little easier.

See the last prototype of Rimac tech in a Hyundai shell was something very special indeed. The RM20e may look like a Veloster built for SEMA, but this pint-sized dynamo cranks out 810 horsepower and goes from a dead stop to 124 mph (200 km/h) in under ten seconds. Did I mention that it’s all electric? The battery pack may be small at 60 kWh, but it’s potent with an output of 600 kW and 705-volt fast-charging capability. If the RM20e is a testbed for high-performance electric tech, the Vision FK is a testbed for just about everything. The back half of this prototype uses Rimac’s battery pack to drive the rear wheels and a hydrogen fuel cell to drive the front wheels. In theory, this dual-power setup would enhance trackday session longevity, and tech from this vehicle could be coming to a production Hyundai sometime in the next few decades. Honestly, I’m glad that Rimac and Hyundai will continue to make cool stuff. After all, what’s hotter than high-performance engineering prototypes?

Whelp, time to drop the lid on this edition of The Morning Dump. While electric powertrains and buzzword capital have made it much easier to make a car, how many of these electric vehicle startups will still be around in a decade? I’m fairly confident that Rimac will still be around thanks to their Porsche ties and extensive engineering contracting, I’m not so sure about Rivian or even Tesla.

Thomas is a Nu Rave-blaring, heel-toe downshifting, maple syrup-swilling, chassis-geeking, junkyard parts-hauling, floppy-haired scenester who's been writing about cars since college. His current ride is a 2006 BMW 325i with the six-speed manual gearbox. Instagram: @thomas.hundal Twitter: @thomashundal
Read All My Posts »
PrevPreviousJeep CJ-5 or Yugo GV: Which Autopian Founder Would You Rather Cosplay?
NextThis 1906 ‘Magic Lantern’ Show May Be The First Car MovieNext