I love to look at failures in the world of transportation; typically there’s a kernel of usefulness in even the worst ones. With Running Up That Hill on the charts now, it’s worth revisiting something else that Americans don’t really know about that was a big deal in the UK in 1985: the Sinclair C5. 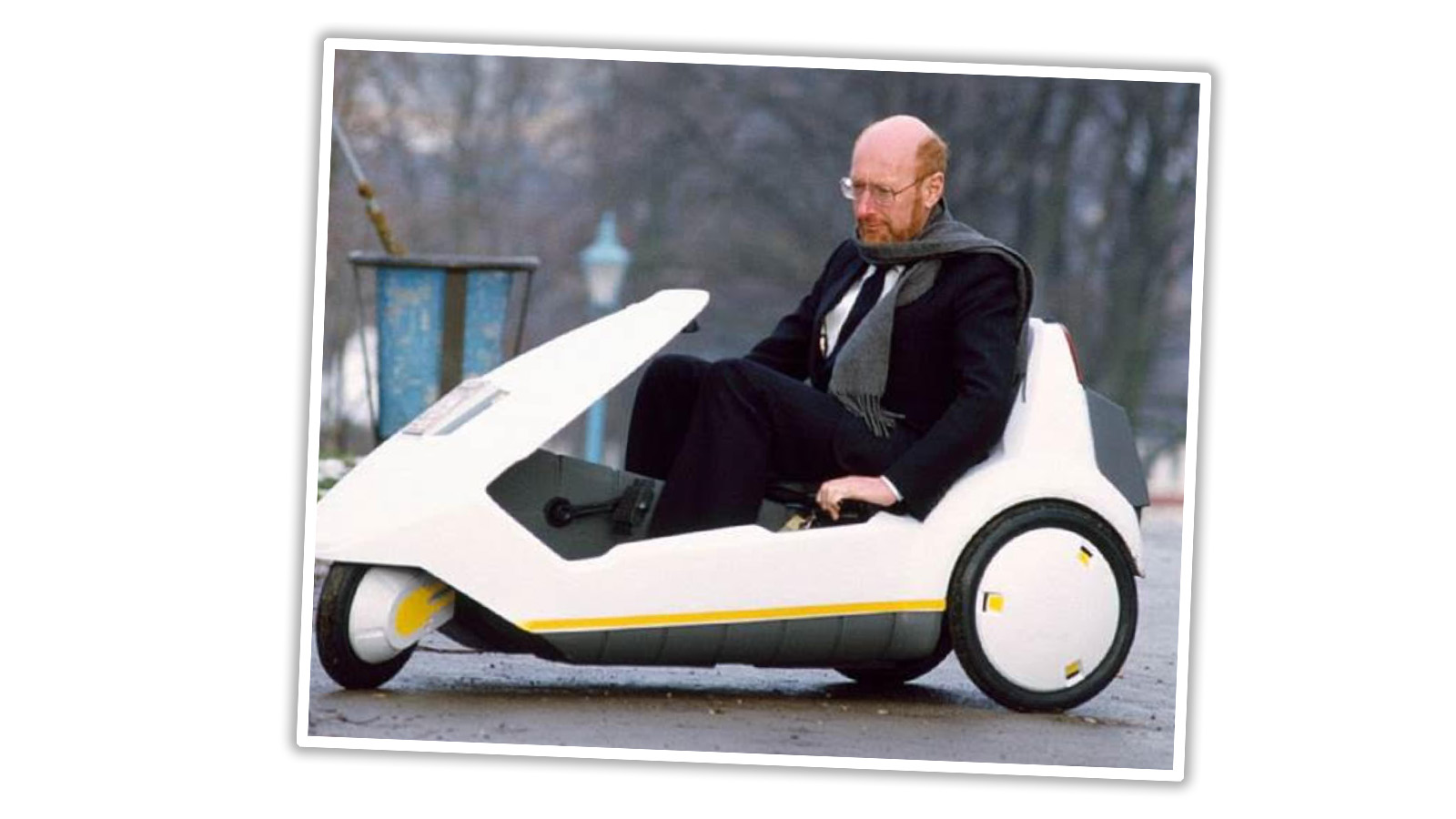 It’s debatable if you can call this electric/pedal powered recumbent bike/go-cart a car. Inventor Sir Clive Sinclair called it “a personal electric vehicle” but the one thing you can undeniably call it is “a failure.” In retrospect, people seemed to forget that success in one industry (Sinclair made one of Great Britain’s first successful personal computers) does not automatically begat success in another endeavor. As the June 25, 1983 issue of The Economist put it,

“If it were anyone but Sinclair, we’d say he was bonkers. Can a man who has made a fortune out of calculators and computers, and could double it on flatscreen televisions, be that crazy?” 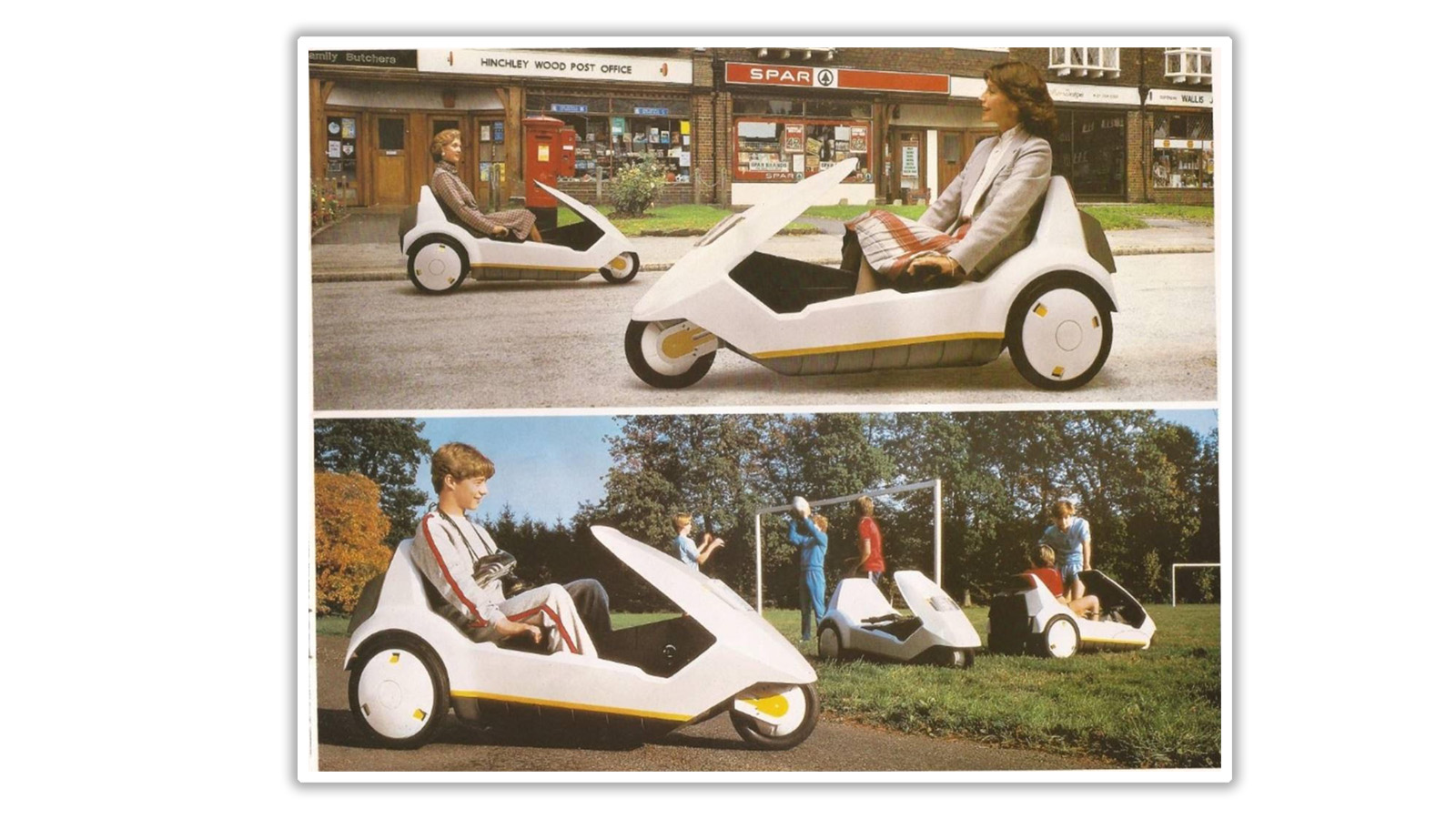 The C5 had numerous issues… it appeared too small to be a legitimate street machine, but too large for something that had no cargo space. Oh, did you know that it rains in England?  They offered this great option: 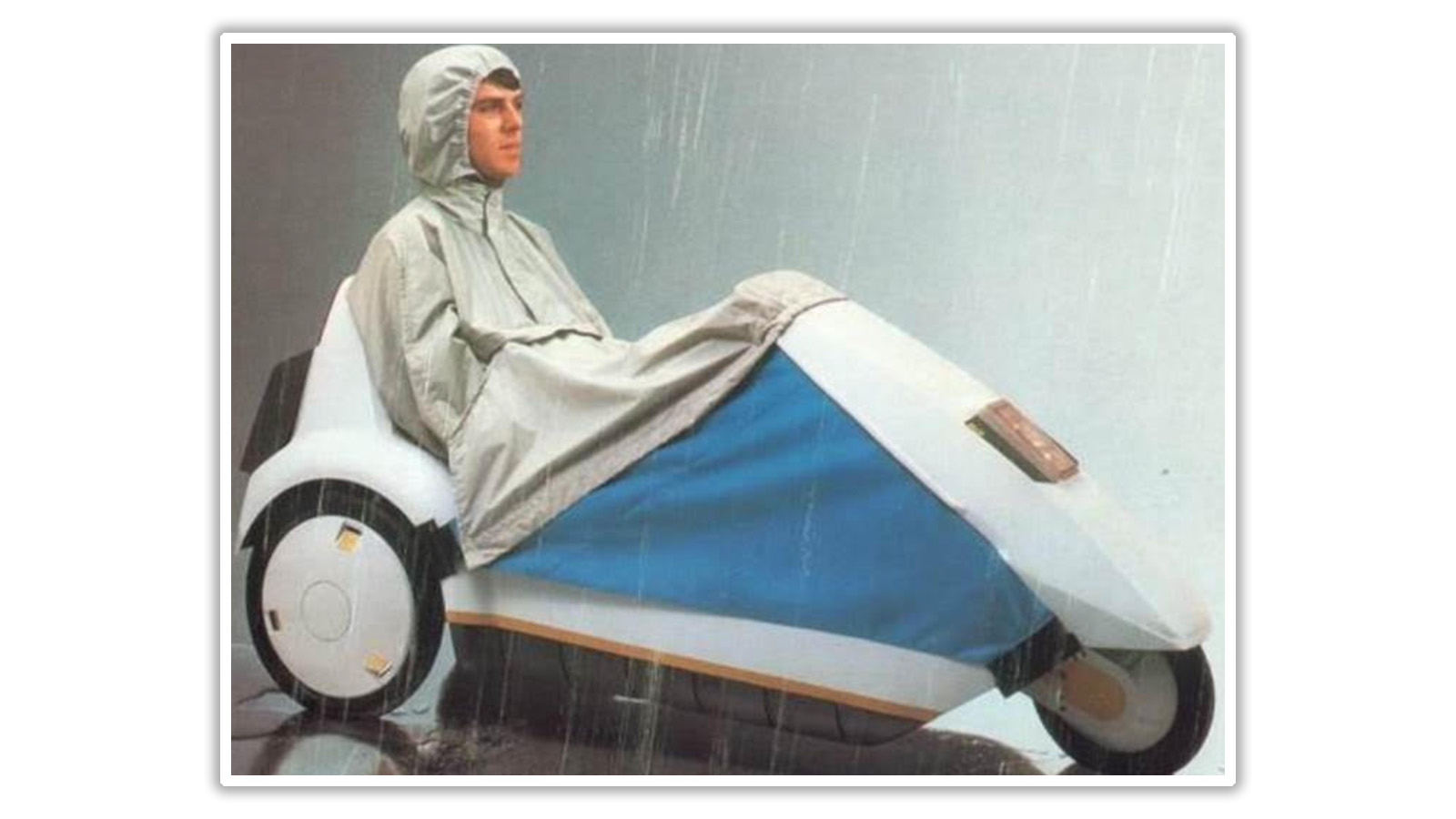 Clive even wasted money having Lotus engineer the chassis and the “handling” on a 15 mph vehicle.

[Editor’s Note: I’ve driven one of these crazy things! It was a failure well and admirably earned.

Also, the range of the C5 was crap, and the fact that it had frequently-needed foot pedals–forget it. He should have just made an electric bicycle.

I know that Clive had ideas for larger products before it all fell apart. The next project (the C10) is hard to find information on.  I saw the below image online and, if legitimate, it appears the C10 was essentially going to be a Smart Car without doors, and considering the lukewarm success of that (I’m sorry, Mercedes Streeter!) this concept looks like it would not exactly have killed it on the market. 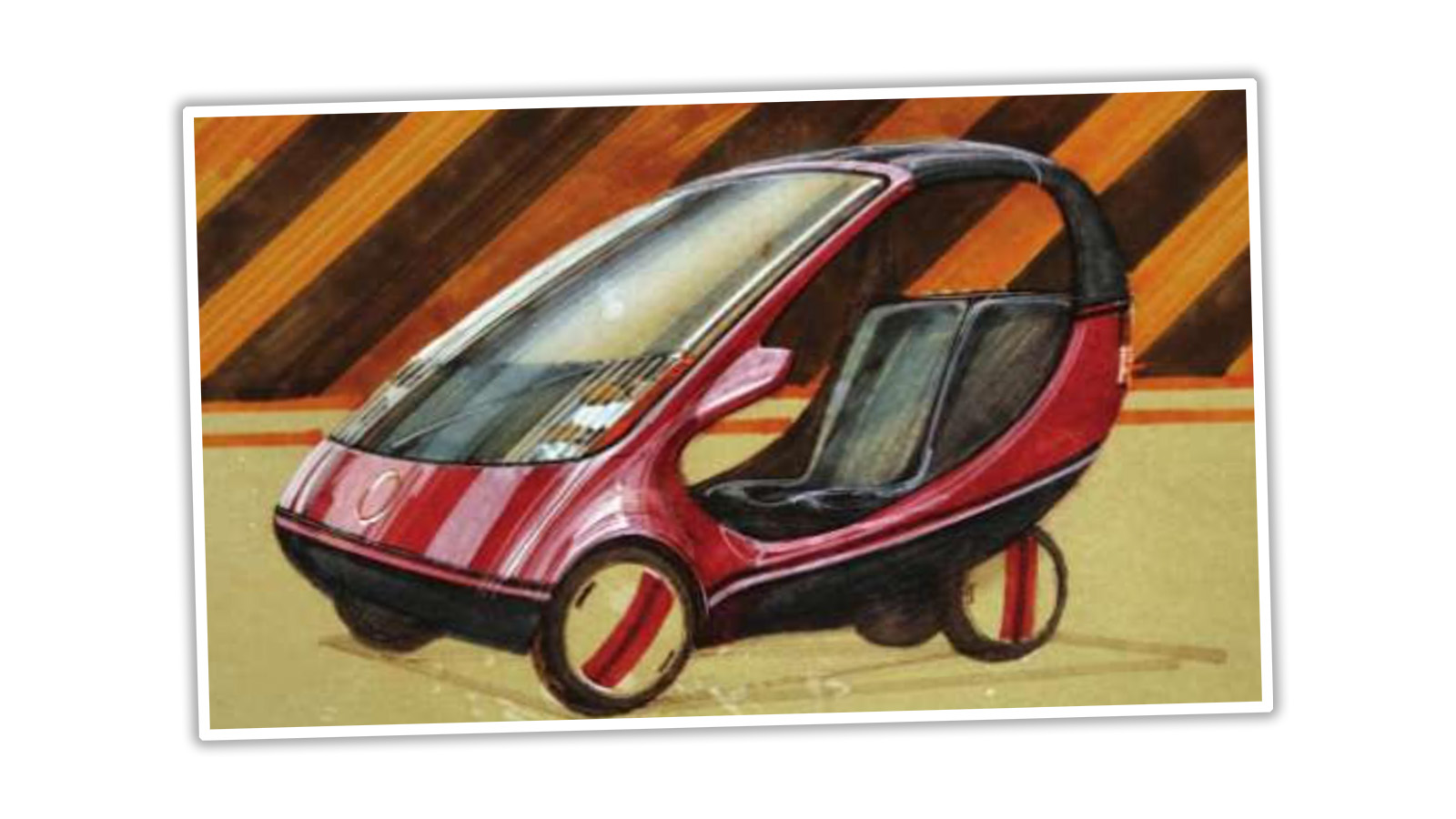 Still, despite the C5’s failure and C10 concept’s seeming lack of viability, I am not convinced that the more-than-a-bike but less-than-a-car concept was all wet. In Europe and Asia, you may still see whole families on a moped or small motorcycle. My old roommate at school claimed that back in Portugal his parent carried the family and a piece of furniture home on a Vespa, at the same time.

You will often see moms biking with babies in front of stretched bikes like these in Amsterdam: 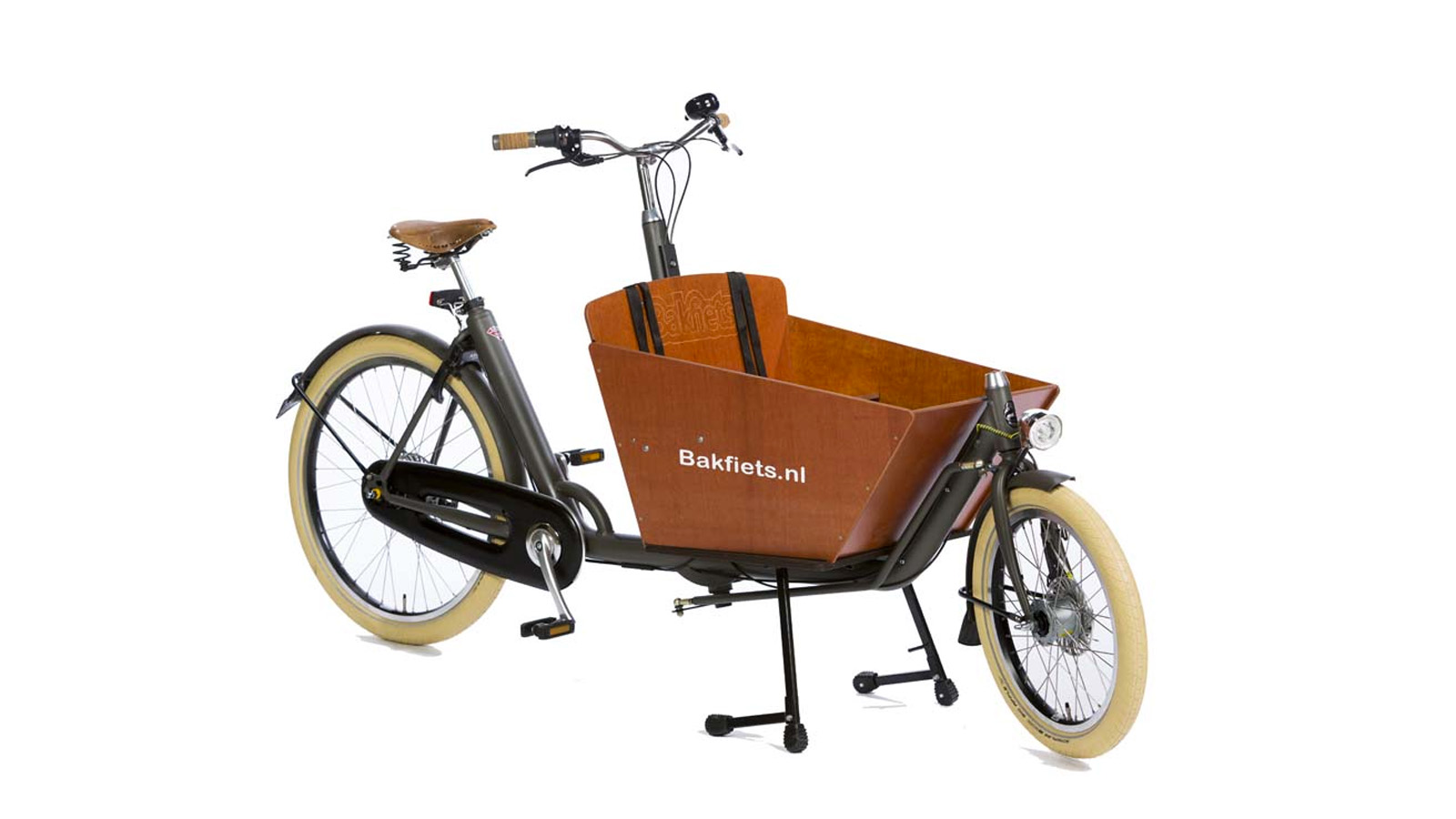 There could have been a market for a new-day Messerschmitt or a Peel Trident (a German and British microcar from ~1960, respectively), something still a fraction of the size of a Mini. I think the idea of a modern version of those microcars could have worked if the vehicle launched in 1985 (or the follow up) with the following attributes: 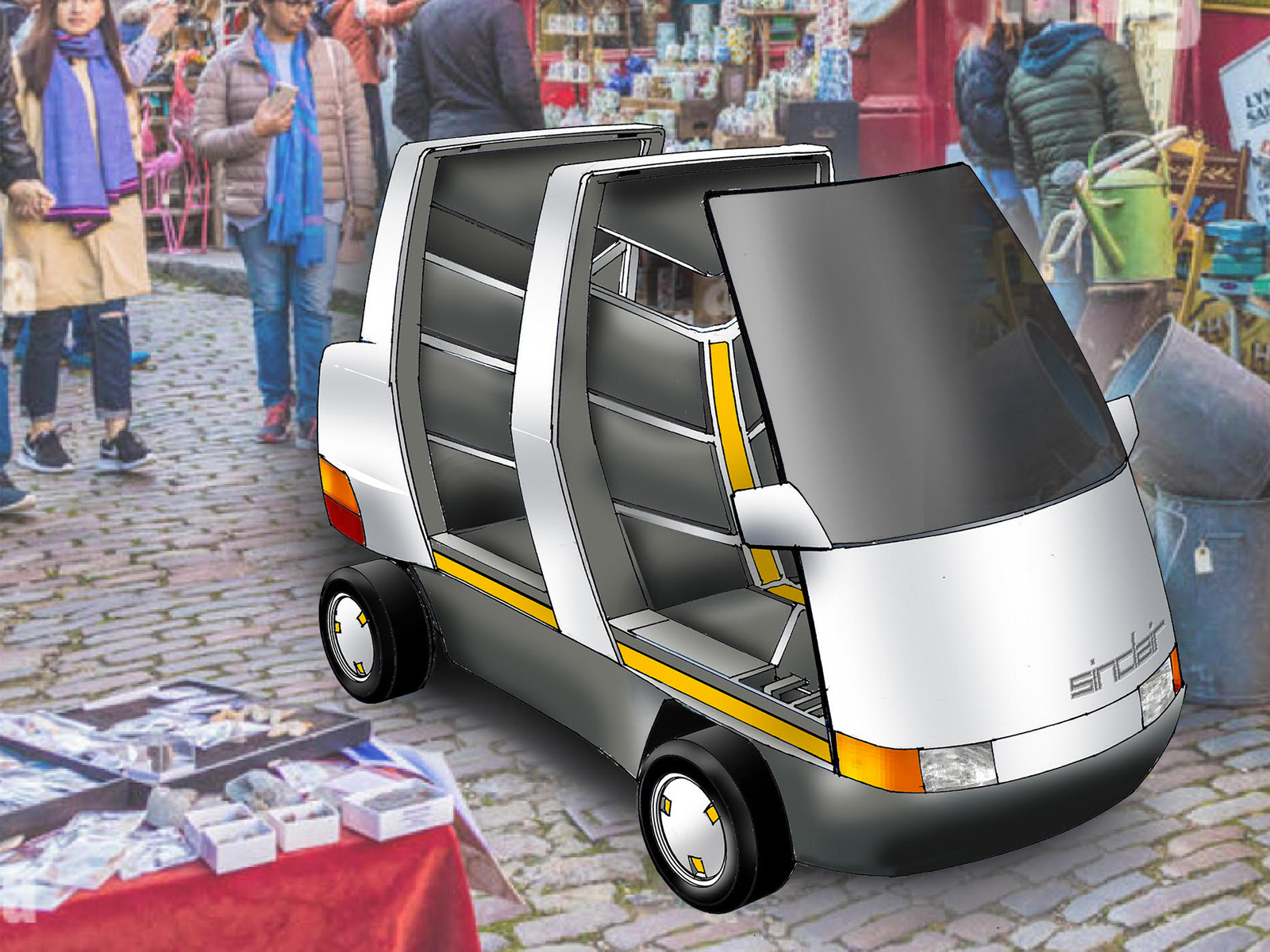 I did some extensive space planning (my 11 year old pushed our office chairs one behind the other) and it looked like you could get two upright passengers back to back, plus a small trunk (boot) or cargo bed in a space not much longer than a C5.  Here was the initial rough sketch: 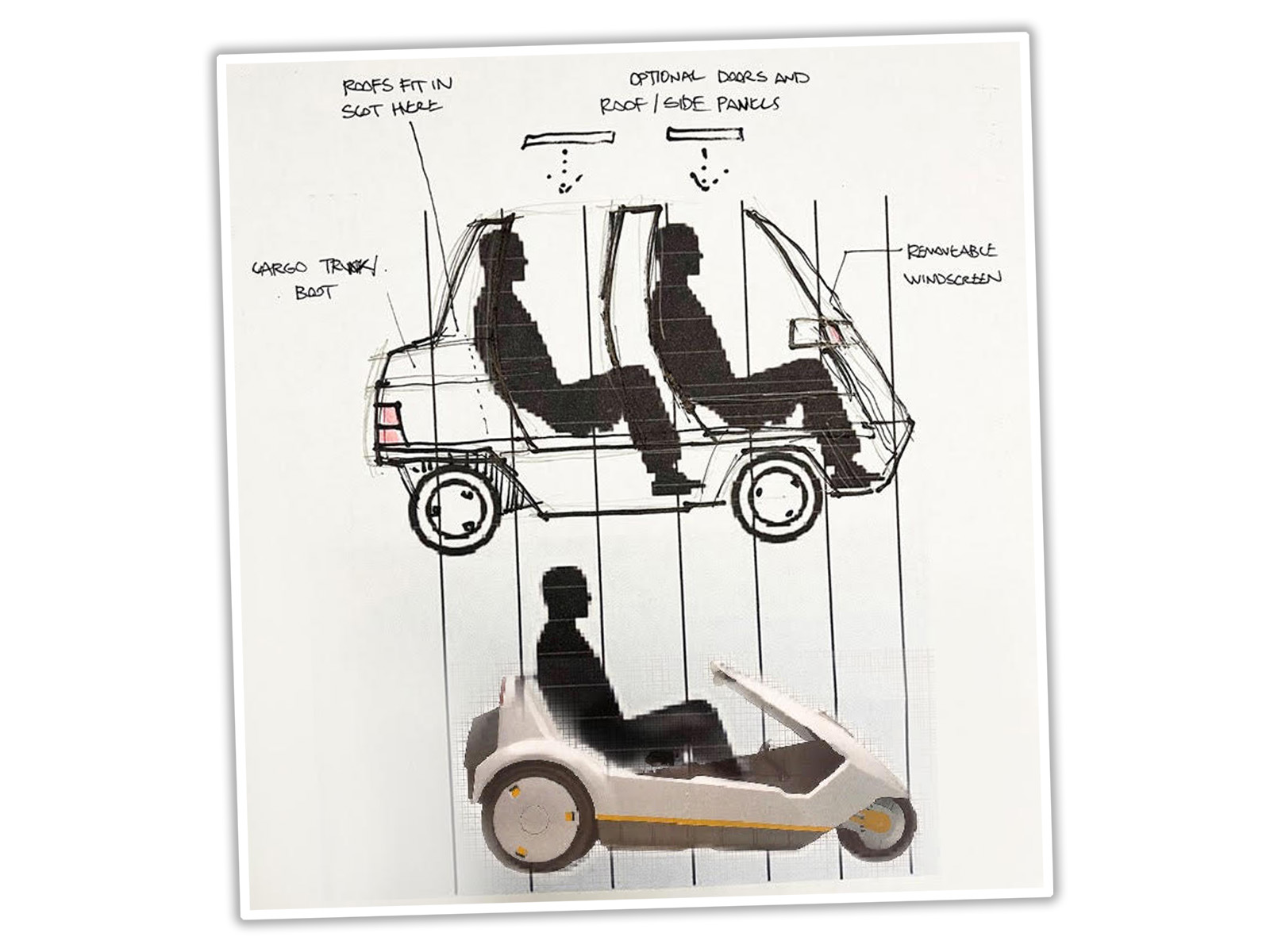 The whole thing is significantly taller than a C5, which should help other motorists see you. Batteries are under the seats, so despite the tall, narrow proportions the center of gravity would be low. The width is enough to get two small kids in the back seat(no seat belts of course in 1985), and if you aren’t carrying a rear passenger that back seat could be packed with cargo. You could even have the rear seatback removable to create a cargo area big enough for a giant CRT TV…

A big improvement is the different weather protection options. You can start with a wide open driving experience if you’d like by removing the windshield and front fascia (that’s why the lights are mounted so low); that would be especially good for indoor use in things called shopping malls that used to exist back then. Or in an airport or huge production facility.

Next, there would be roof panels that could attach to the targa/roll bars above the seats (these could store in a slot behind the rear seat back) for rain and sun protection. Additionally, you could have either roll down clear side curtains or maybe offer wire-framed side doors (notice these fold up photo reflectors below: could this principle might work for doors you could carry with you? Not sure). 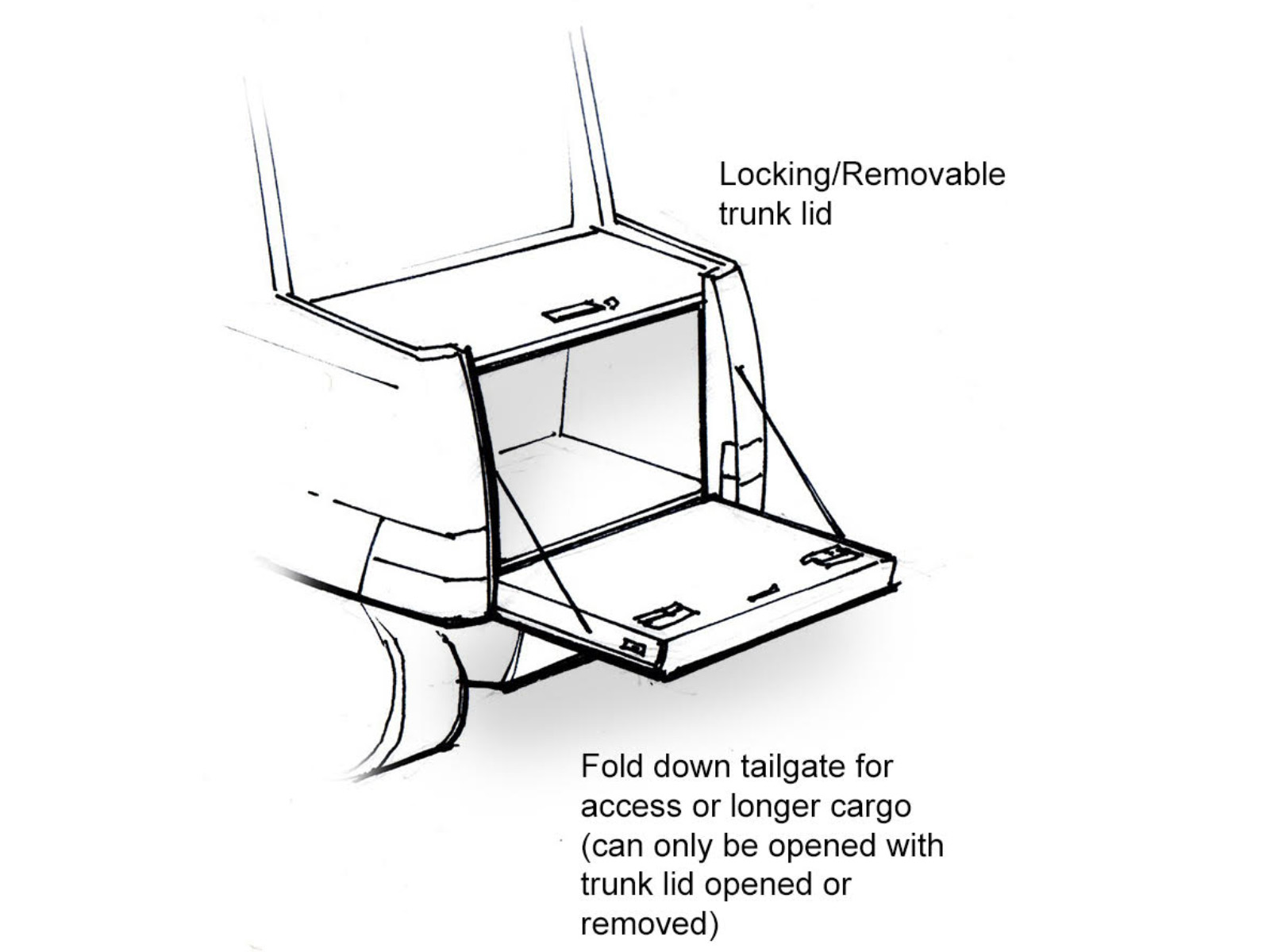 As for the cargo area, it has a lockable waterproof lid on it that opens like a trunk (boot), or you can flip the rear tailgate down to put in bigger items or, possibly, transport longer items sticking out the back.

There could be optional rigid rear half doors to the back seat (especially if kids will be riding there), or even a rigid full rear doors with windows to lock in cargo, keep a pet in place, or to allow a mall cop to secure a perp in the back seat: “We caught you red handed at Gadzooks, Heather!”

What if you just wanted to carry stuff??  We could make a commercial version as well, where the rear seat is gone and it’s all cargo space (either open or covered).  I mean, vendors trying to get to some booth at a festival would never get through in a car or even a golf cart-type vehicle, but this skinny thing would work.

One thing I would carry over from the C5 design is the lack of a steering wheel.  The C5 had a handlebar under your thighs, but in the C10 this would have steering via synchronized left and right levers that would simulate a handlebar (connected by cable to a tie rod). There are padded forearm rests on each side, and then the few controls and displays needed in front of the sliders; left hand side features the battery power LED gauge, headlight and hazard switch, while the right side features the forward/reverse buttons and a five digit keypad used to turn it on and off with a combination code (like Ford Keyless Entry!).

It would then play a few tones to tell you you’re ready to go. There are buttons/switches on the ends of the turn-levers; left hand side for turn signals, and right hand the horn button. Here, have a look: 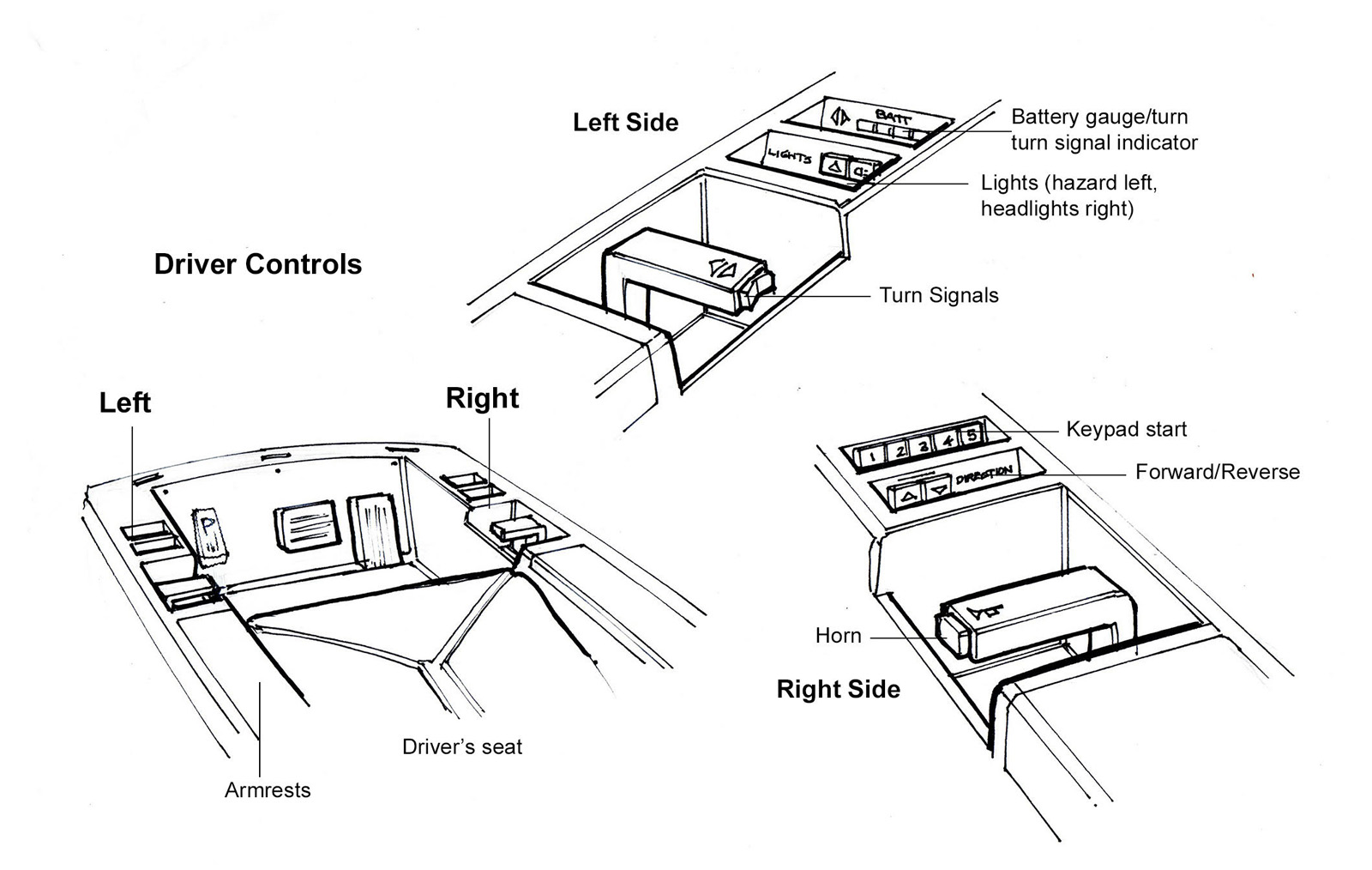 There are foot pedals for “throttle” and also brakes. I thought about the cable operated (four-wheel) brakes being operated by hand levers but it’d be easier to use your foot. Note the pedal on the far left to lock the rears as a parking brake. 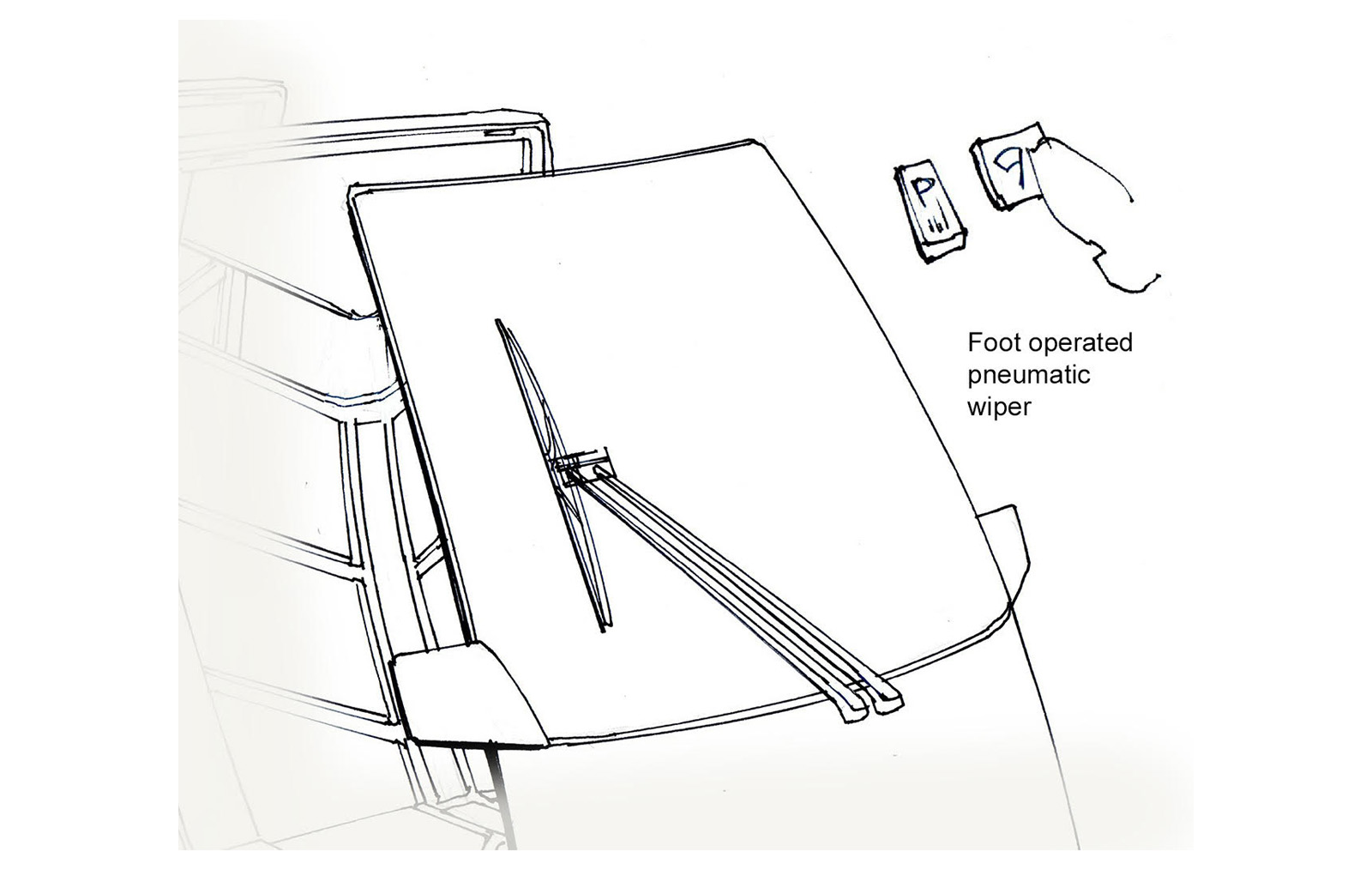 As an option, there would be another foot pedal. Why? Because I realized that one of the extras (if you don’t just want to use RainX) should be a windshield wiper, but I don’t like that sucking battery power. Thus the foot operated pneumatic wiper. Sort of the like the windshield washers on our shit ’69 Dart but instead acting on a geared-down rotary impeller….one push to move the wiper once across the screen.

Is this design now, unlike the C5, an answer to a question someone might have actually asked? Possibly. Think of where you would take a bicycle or a scooter in a European or Asian city and that’s where this could operate (and what if in an alternate reality they allowed this to legally go on bike lanes?). No pollution, none of the hassles of normal sized car parking and ICE maintenance. It’s not gonna cut it in a city like LA or Detroit, but that’s not the point; in the U.S. it could work in retirement centers or resorts quite nicely.

Overall, this thing is kind of like a giant adult Powerwheel, or a scaled down golf cart, which I am sure that Sir Clive would have seen as unimaginative rubbish. It would also be much more expensive than a C5, and likely need some kind of license to drive and register. Overall I think it’s a far more useable solution than the C5, a “car” that was worse than an answer to a question that nobody asked…it was somehow not even the right answer.

Read All My Posts »
PrevPreviousAgainst All Common Sense, Dodge Brings The Durango SRT Hellcat Back From The Dead To Kick Some Super SUV Ass
NextDodge Will Sell Convertible Challengers As Its Prepares To Kill Off The Ancient Charger And Challenger Twins After 2023Next