How To Remove A Stuck and Rounded Lugnut: A Wrencher’s Worst Nightmare

“Son of a bitch!” I yelled, cursing whichever J-hole had apparently run the lug nuts on my $700 Chevy Tracker’s right front wheel down with an impact. “Just torque it to spec you cretin!” I shouted into the sky, picturing that R-hole holding the trigger of that pneumatic impact, banging the lugnuts down until their threads plastically deformed. For hours I toiled to undo the that Y-hole’s dastardly handiwork, and for hours I failed. But, being the stubborn bastard I am, I didn’t give up. Here’s how I triumphed above one of the worst foes in all of wrenching: the seized lugnut.

If you haven’t experienced a stuck lugnut in your days of wrenching, thank the car gods immediately, for it is a traumatic experience from which you will emerge a different person. A hardened person. A person who, when someone mentions brake work or suspension work or swapping out summer tires for winter tires, just stares blankly out into the distance, quivering ever so slightly before “coming to.” It’s bad; it’s really bad.

The last time I dealt with a stuck wheel nut, I never did manage to get the thing off. It was holding an aluminum five-spoke wheel to, if I recall correctly, a Jeep Cherokee XJ’s Dana 30 front axle; I don’t remember what I did to solve that issue — I think I just removed the whole wheel hub from the knuckle, and recycled the hub/wheel together. I really can’t remember. Anyway, that experience stuck with me, so when I went to yank the right front wheel off my recently-acquired $700 Chevy Tracker, and was met with a lot of resistance, terror shot through my veins. 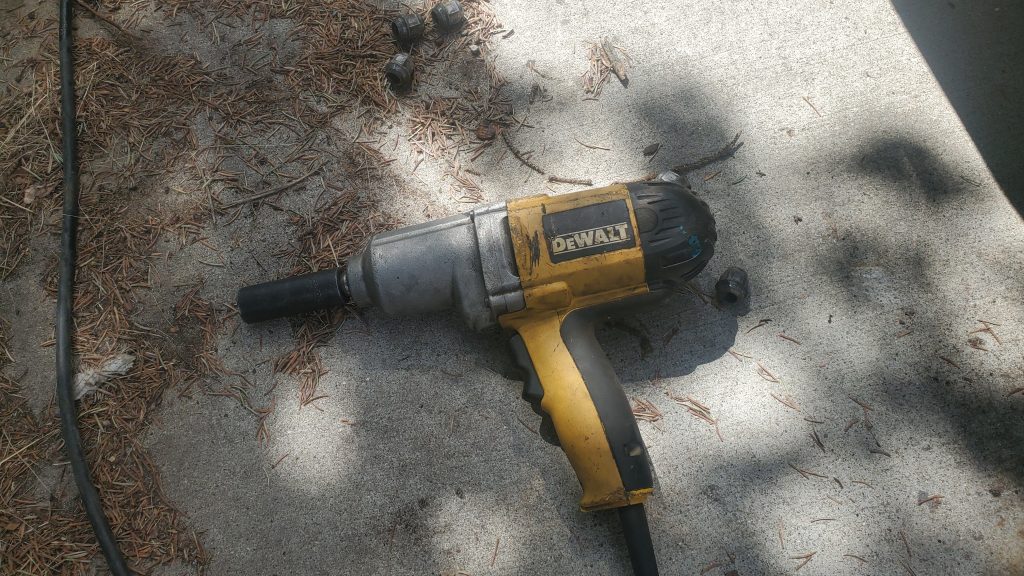 This was a corded DeWalt impact I was using to loosen these nuts — it had been undefeated up to that point in lugnut removal bouts, but I was 15 seconds into holding its trigger and nothing was spinning. “Oh hell no,” I thought as I held onto that trigger for a few more seconds. I then liberally sprayed on my favorite penetrating lubricant, “Cleveland’s Finest,” as I like to call it — PB Blaster. I left the nuts to soak for a day, and returned yesterday to finish the job. 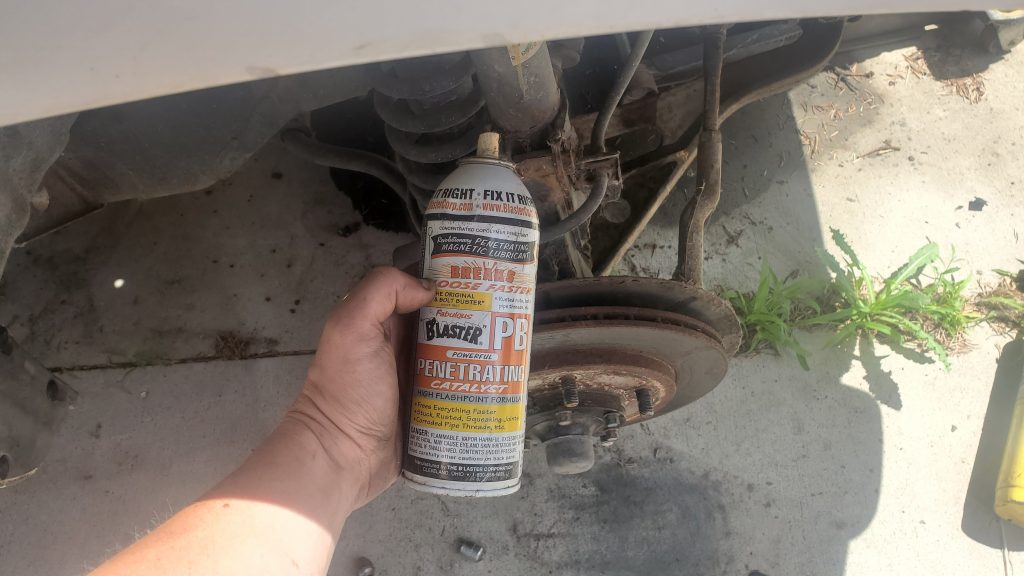 I threw the 19mm socket onto the lugnut, popped the nose of my DeWalt impact into the square end, and hit the trigger. “Bumbumbumbumbum!” I heard as I felt the socket let go, no longer requiring me to hold tightly to that impact wrench to counter the torque. The socket was now just spinning, bouncing lightly on what was left of the six points of the hex nut. I removed the socket: 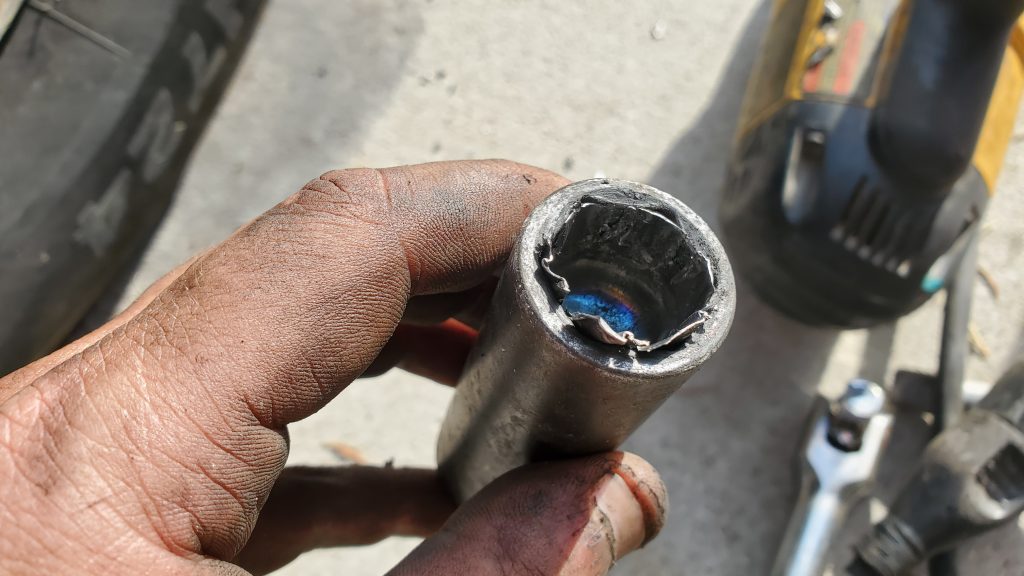 Oh crap. What the hell! A two-piece lugnut?!

I have for years been cursing the two-piece lugnut, a regular open acorn-nut with a cheap sheetmetal beauty cover over its end. That sheetmetal cover can not only break, like it did here, but it also very frequently just slides right off, leaving the bare open acorn nut underneath. That acorn nut, by the way, still does the job, but it lets moisture into the threads and, more importantly, it’s a smaller size since it no longer has a cover, so trying to use your regular socket will just cause you to round the acorn below.

I knew this, of course, so I went down to an 18mm. Shoving that onto the bare acorn nut resulted in, well, more peril. I rounded the acorn. Sonuva bitch! 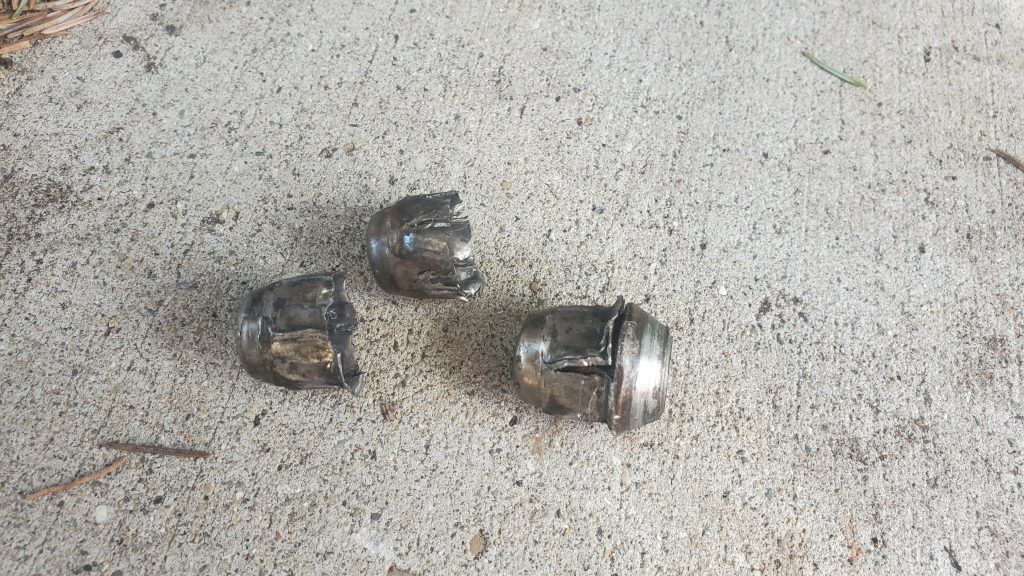 From there, I decided to break out the big guns. First, I grabbed a sledgehammer to break the tiles in my kitchen, revealing secret bunker doors. Then I grabbed my bolt cutters to get through a lock, and pulled — gripping with two hands, and leaning back hard — the two doors, which opened about their outboard hinges. “BANG” the cast iron closures went as they landed, breaking even more tiles. I then hopped into my climbing harness, hooked into a carabiner, and slowly lowered myself 200 feet to my secret lair, which was really nothing more than a humongous dirt cave. It was pitch black down there; spiders and rats abounded, and a tiny light flickered 500 yards away in a corner. I deactivated the booby traps, and pushed over the barriers marked “WARNING: DANGER AHEAD. TURN BACK.” I was now just feet away from the tiny light, which stood directly above what looked like a small cylindrical object.

I knew that continuing my approach would knock at least seven years from my life expectancy, as the potent smell that I’d come down here for began triggering my nasal receptors. But I continued on, wiped the grime off the cylinder sitting upon a marble perch, and read a name I hadn’t seen in years: AERO KROIL. 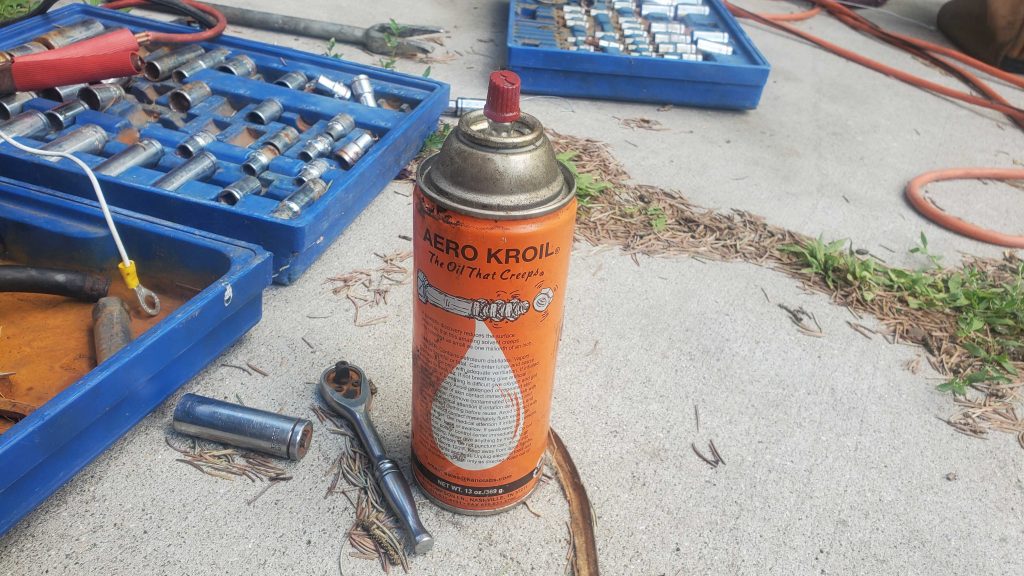 It’s the most potent penetrating lubricant in all the land. Many, including I, fear it, as one shot of the pink liquid creates a smell so powerful it feels as if it’s penetrating your very soul. I try to avoid it whenever possible, but the Tracker’s lugnuts gave me no choice. Upon gripping the can, I sprinted across the dark, dank floor of my underground lair, hooked my harness back up to the cable, and hoisted myself up to my kitchen, which was now covered in shattered tile.

If You Round Your Nut, Hammer On A Slightly-Too-Small Socket 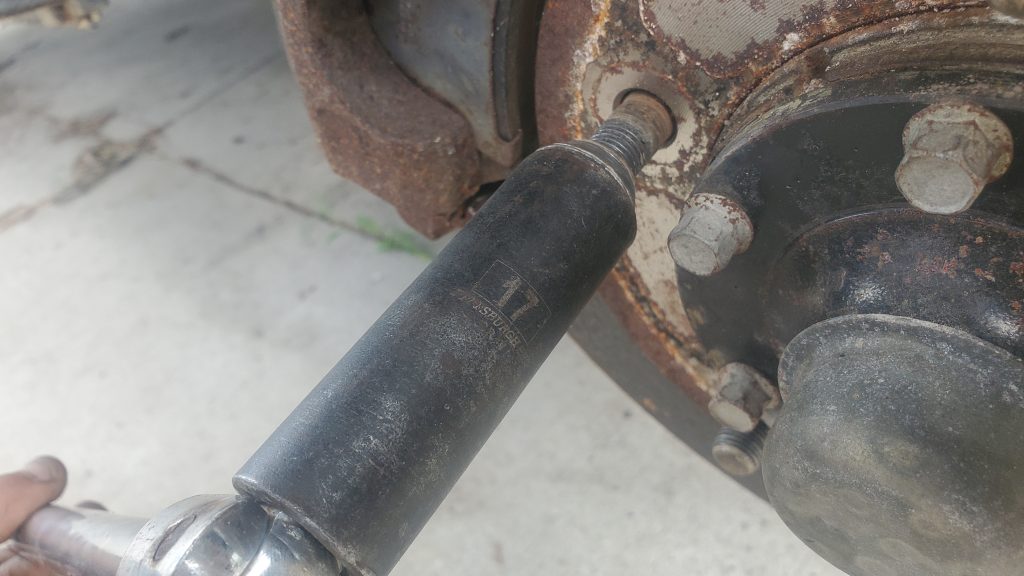 I then ran out to the Chevy Tracker in my driveway, slowly removed the can’s lid, and pressed the trigger. A pink stream impacted the lugnuts, I dropped the can, and ran as far as I could, hoping to avoid wafting in The Kroil. I returned six hours later, expecting a 50 foot crater where my Chevy once was, but luckily, the fluid must have focused its energy on the corrosion between the lugnuts and the wheel/wheel studs. Knowing that there was still residual Kroil on my wheel, I tried making quick work of my operation. I grabbed a 17mm socket (a 12-point might have fit on there better; I used a six-point), placed it over the rounded 18mm nut, and hammered the crap out of it with a sledgehammer. The socket cut deep into the nut, forcing the steel to flow and subside like a liquid, creating grooves that the socket could use for grip. I shoved my DeWalt into the socket and hit the trigger.

” BANG BANG BANG” went the impact wrench. But no movement. How was this possible?! The Kroil! I’d sacrificed part of my life expectancy to use it, and it had… failed me? I tried again. “BANG BANG BANG!” Still nothing.

Desperate times called for desperate measures, so I reached for my two-foot breaker bar. Then I grabbed my MAPP gas torch. The added leverage along with the heat along with the Kroil, I reasoned, would conquer this situation easily. After removing the 17mm socket, I applied the flame to the rounded nut, hammered the socket back on, and installed the end of the breaker bar. I pushed, but nothing happened. So I pushed more; still nothing. Then I gave it all I head, and finally the bar moved. I looked down at the lugnut and was shocked; The socket was rounding the nut!

I was now growing deeply concerned. If I couldn’t get this lugnut off, I’d have to drill out the lug and replace the stud. This would be a gigantic pain in my ass, as I’d have to remove the hub, which isn’t exactly trivial on these Trackers. But I was running out of options. I’d now broken the outer lugnut shell, rounded the 18mm nut, rounded the rounded 18mm nut with a 17mm socket, and now the acorn nut looked a lot more like an acorn than it had when it had flat sides.

After carefully replacing that AeroKroil — which, I’m convinced, is basically nitroglycerine — back into the dark cave below my kitchen, I searched my garage for something, anything, that could bring me relief. Luckily, I found my rounded-nut removal tool kit (also called a bolt extractor kit).

Hammer A Bolt Extractor Like One From This Irwin Kit

The biggest one in my collection was a 16mm, and though I’d just rounded the nut with a 17mm, the fact is that I was now about to try to drop three millimeters from the nut’s original size, or two if we discount the sheetmetal shield. I didn’t have a 17mm rounded-nut removal tool, so — after heating up the nut — I placed the 16mm one over it, and whaled on the tool with a sledgehammer until it bit into the nut a few millimeters. I then grabbed my breaker bar, installed a 1/2-inch-to-3/8-inch adapter (since my rounded nut removal tool was a 3/8-drive tool), and shoved that into the tool now locked onto my lugnut. As soon as I started pushing the breaker bar, I could feel plastic deformation; I knew right away what was happening: 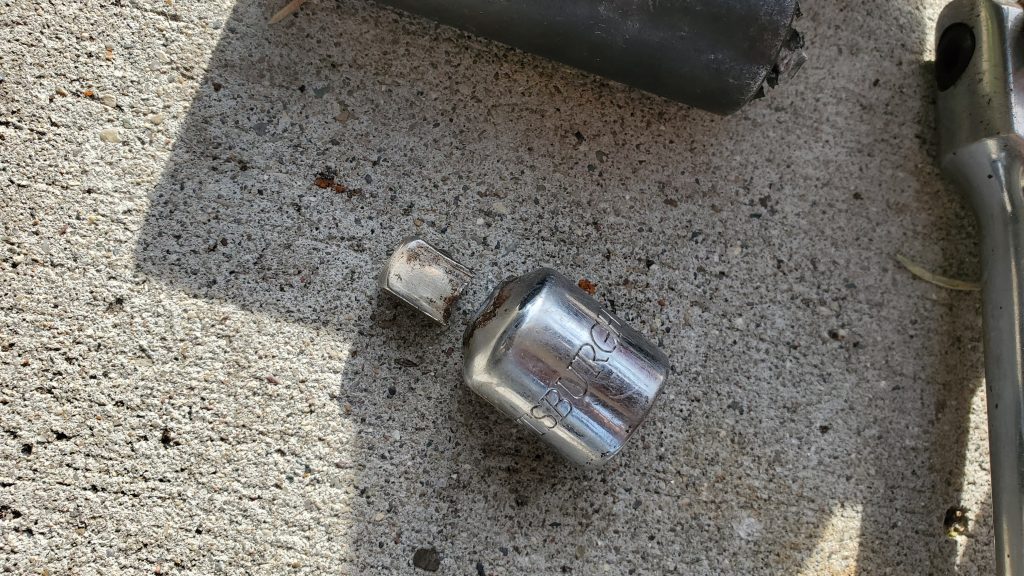 Luckily, the rounded nut removal tool has a hex on its outer surface, so a 21mm socket went right over top. Pushing the breaker bar further, I felt it spin, though nothing “broke free.” I was just tearing up the outside of the nut. Ef! 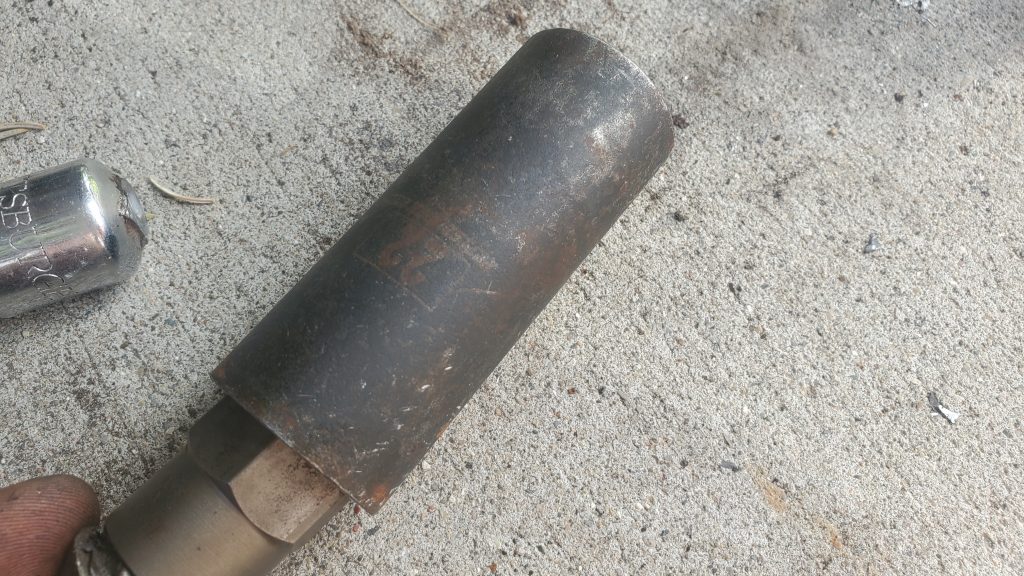 Use LOTS Of Heat

My rounded nut removal tool had only slid on a few millimeters, since – again — it was a 16mm, which was much smaller than the nut’s original size. I knew I had only one final choice: I had to hammer that tool all the way onto that nut. It wouldn’t want to, because it’s too small, but with enough whaling on that tool with my sledgehammer, that bastard was going to get on there. First, though, I had to heat the nut up far more than I had so far. I had to let that flame just linger. 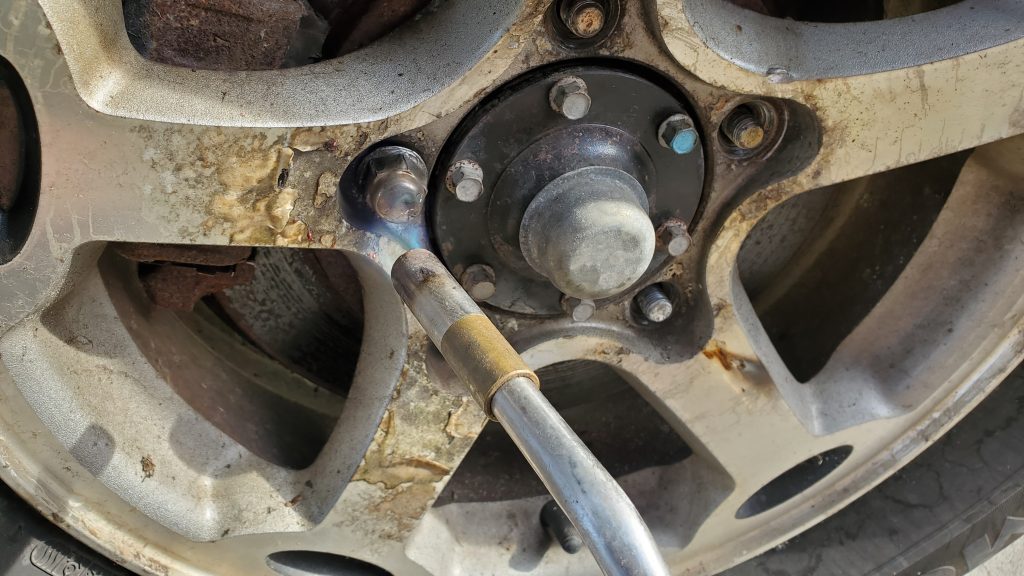 I watched as my aluminum wheel’s clearcoat literally caught fire; I had to let it go, because this was the only chance I had. For about a full minute, I held the MAPP gas flame over that nut until it was hotter than magma; then, after really giving it everything I had, I managed to get the rounded nut removal tool to slice through the nut and seat itself all the way to the nut’s base. 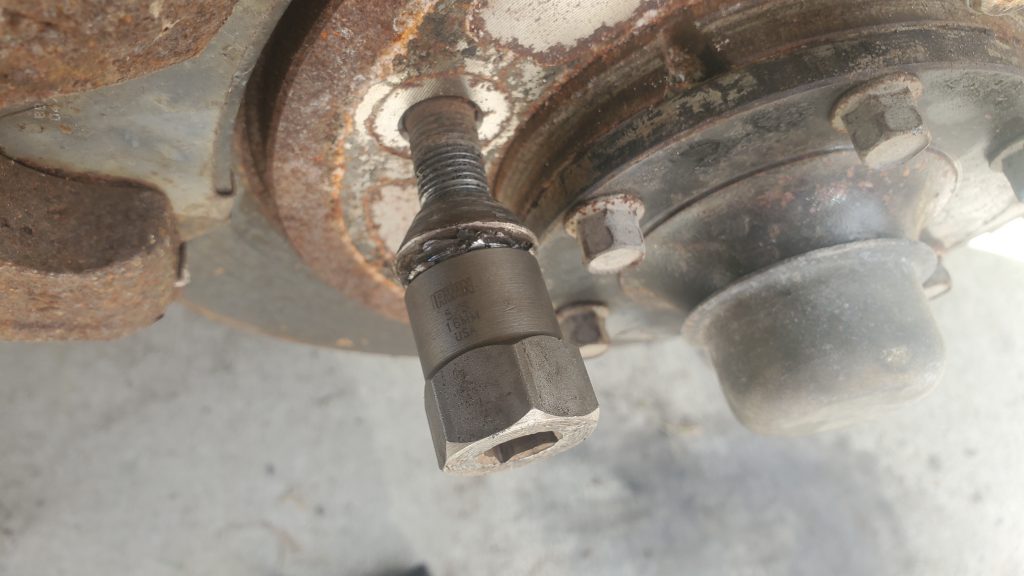 Use A Big-Ass Breaker Bar

Of course, this was just round one. I had four more lugnuts to go. 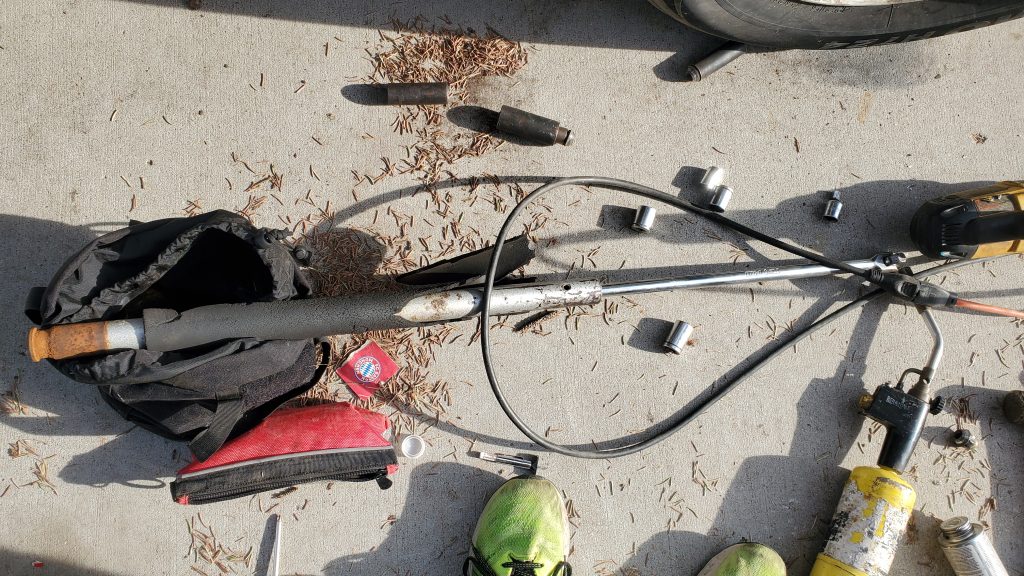 I ended up breaking one more sheetmetal beauty cover, and in one case, I had to install a jack handle over my breaker bar (see above) to give me three feet of leverage instead of just two, but ultimately I managed to get all five lugnuts off thanks to copious — and I mean copious  — amounts of heat from that MAPP torch. That really was the ticket; I had to be okay with destroying my wheel’s clearcoat so that I could really heat those nuts and studs up, then I had to just get enough grip and leverage to break the nuts free. 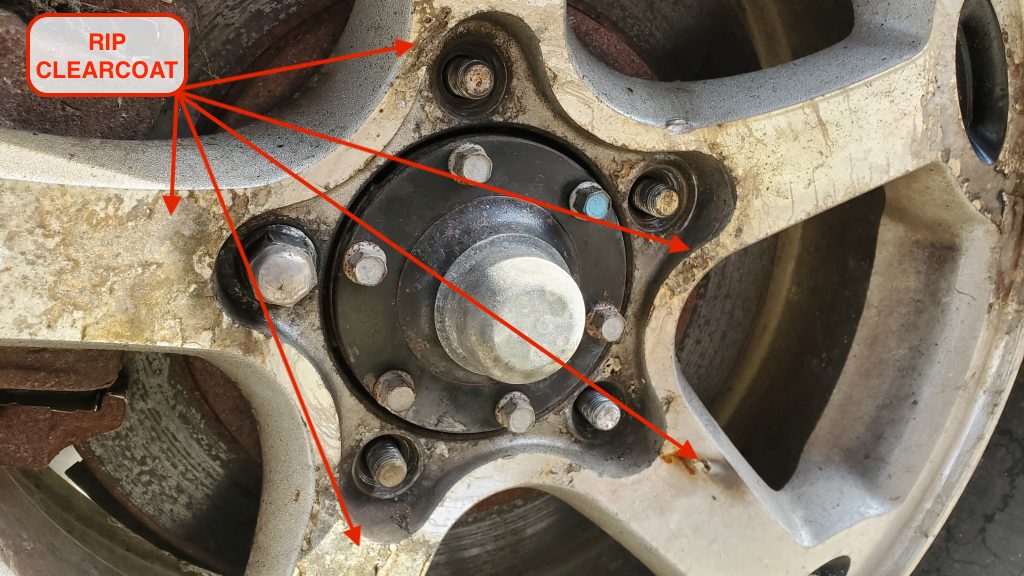 The whole ordeal of removing five lugnuts took me a few hours; normally, it’d take me about 30 seconds. So to whichever U-hole is responsible for really ugga-dugga-ing the crap out of those five nuts: I hereby place an very specific automotive curse on you for all of eternity: May all of your vehicles saddle you with peeling clearcoat, squealing serpentine belts, and sagging headliners.

Rust-loving Jeep man, cofounder and EIC of The Autopian, Jason's friend. Email: david@autopian.com
Read All My Posts »
PrevPreviousDriving An Old Acura NSX Is A Wonderful Assault On Nearly All Of Your Senses
NextThe Volkswagen ID.AERO Is Coming To Save The Large Sedan Using The Power Of ElectricityNext