Facebook-f Twitter Instagram Rss
Menu
Menu
Home » The Volkswagen ID.AERO Is Coming To Save The Large Sedan Using The Power Of Electricity 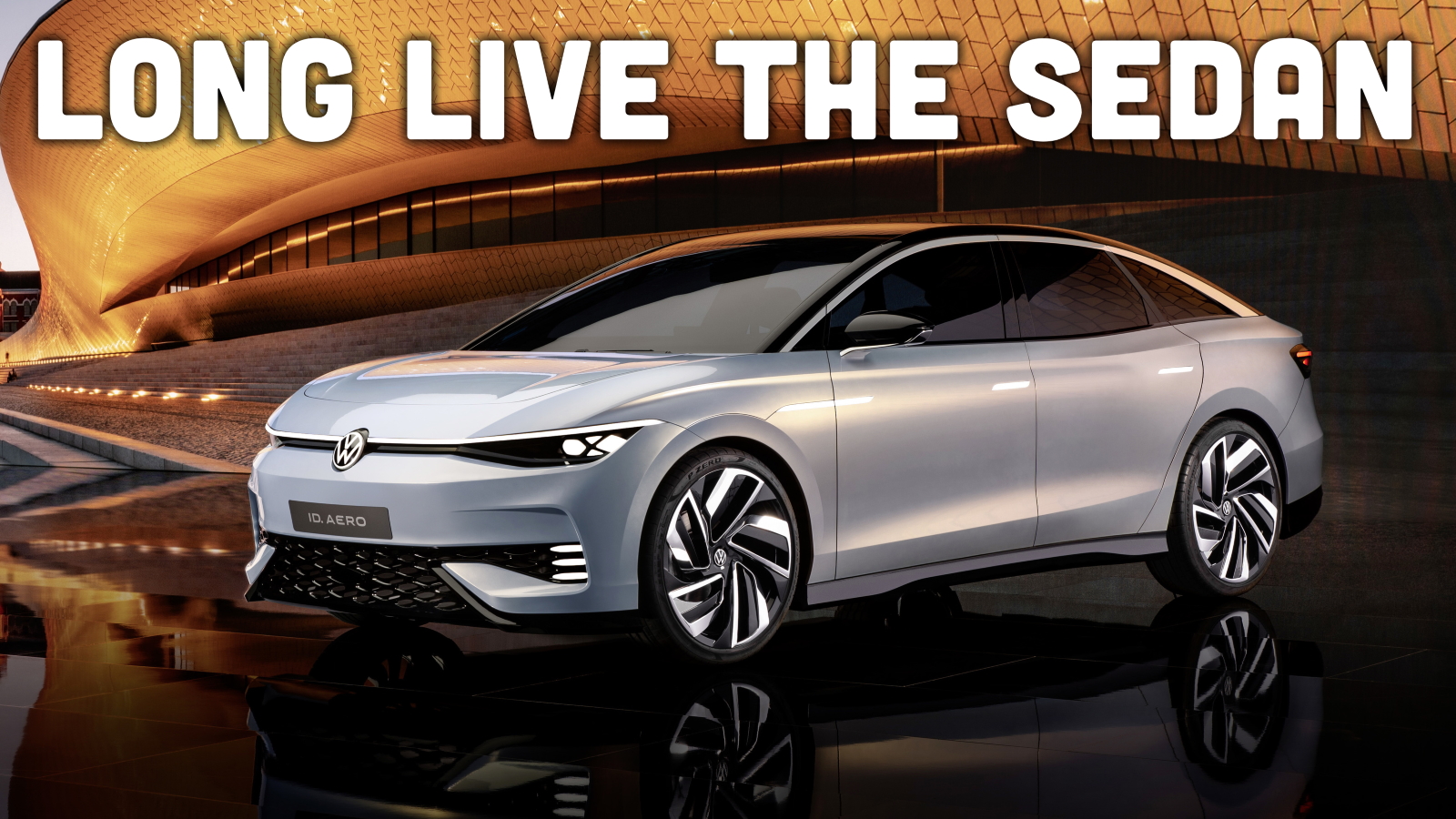 As practical and pragmatic as crossovers are, there’s just something beautiful about a sedan. Call it tradition, glamour, or the cultural impact of Harley Earl’s “Longer, lower, wider” mantra, cars that cut a low, sweeping silhouette just look right. Volkswagen hasn’t forgotten this, so the German carmaker is honoring the classy, time-honored four-door silhouette with its new ID.AERO.

First, something to keep in mind. The ID.AERO shown off today is a prototype, of sorts. Volkswagen is tight-lipped about changes for production, but it seems like we’re looking at a relatively finished vehicle. Key tip-offs include the plethora of cut lines between panels, the red reflector set in the lower rear valence, real mirrors, and what look to be street tires. I’d be surprised if Volkswagen changes too much between now and the start of production, so feel free to take this car as a general vision of things to come.

Right, preamble out of the way, let’s get down to design. This thing looks awesome. Sure, it’s got the Passat CC four-door coupe thing going on, but that’s to be expected for aerodynamic reasons. The hard break of the roofline in a traditional sedan creates a low-pressure zone above the trunk lid, which isn’t exactly great for aerodynamics. Whether you love or hate sloping rooflines, it’s hard to deny their benefits in EV applications. Perhaps more importantly, this is a sedan of proper scale. Volkswagen says that the ID.AERO is nearly five meters (196.85 inches) long, which puts it solidly in Toyota Avalon territory. This is a big car, and I’m all for it. With the Avalon gone, the Chrysler full-sizers not long for this world, and the Nissan Maxima fading into irrelevance, someone needs to keep the flame of big, glamorous, retail-brand cars for golfing alive.

Mind you, unless the ID.AERO is a liftback, I’m not terribly optimistic about easy loading of golf bags into this thing. Despite having a cab-forward silhouette, it takes long hood, short deck proportions to the extreme. Likely a good thing for rear headroom and aerodynamics, but trunk loading looks to be a bit of a nightmare. Still, looking good feels worth it, yeah? Moving along the side, the ID.AERO makes fantastic use of color, trim, and character lines. The black roof has this sweeping contrasting rail that really enhances visual length, while the main character line above the door handles is as sharp as Gordon Ramsay’s paring knife. Add in an upward-curving lower character line and reasonably tidy flat surfaces around the arches, and you have one devilishly handsome sedan.

Up front, the ID.AERO might just be the best EV application of VW’s corporate face. There’s a pleasing sharpness to the light bar, and the relatively modest lower grille is bang-on with a typical EV’s cooling requirements. Speaking of the lower grille area, take a look at those corner lights. They’re almost like the battery indicators on old electronics, such a neat little detail that fills space perfectly. Between those accent lights and the lower grille sit a pair of body-color swooshes that make the ID.AERO almost look saber-toothed. Honestly, they do a great job of breaking up the lower valence and enhancing visual width. Finally, one last neat front end detail. Check out the hexagonal headlight shrouds! While I have no idea if they’ll make production, they look cool as hell and I’d love to see them on the street someday.

Swapping ends, let’s talk about the back of the ID.AERO, a wonderfully restrained piece of design. The full-width tail light features these diamonds reminiscent of old Pontiacs, while the full-width reflector tucked low on the rear valence reduces clutter and actually feels styled rather than tacked on. Finishing things up is a small yet surprisingly aggressive diffuser-like lower valence. Those strakes are pretty gnarly and likely functional given the curvature of the lower piece. In fact, the black lower valence trim ties in perfectly with the black side skirts and black accents on the corners of the front bumper. Good stuff.

While Volkswagen’s given us plenty to look at, they’ve been tight-lipped on performance and haven’t shown us the interior of the ID.AERO at all. So, let’s skip the interior and jump into capability. The ID.AERO doesn’t just look slipperier than a greased skating rink, it mocks the wind with an impressive 0.23 drag coefficient. Combine that with 77 kWh of usable battery pack capacity, and the ID.AERO scores an estimated 620 km (385.25 mi) of range on the WLTP cycle. For context, the longest-range Volkswagen ID.4 has a WLTP range of 522 km (324 mi), so the ID.AERO represents a fairly significant step up. Alright, so that’s an estimated range, but what about efficiency? Well, dividing WLTP range by battery pack size means that Volkswagen’s estimating energy consumption of 5 mi/kWh (8.05 km/kWh) on the WLTP cycle. While EPA range varies significantly from WLTP range, there’s every chance that this will be one seriously efficient EV.

Even more impressive than the ID.AERO’s projected efficiency is the fact that it doesn’t use a new platform. This thing’s still on Volkswagen’s MEB platform, the same one underpinning the ID.4 electric crossover, ID.3 hatchback, and upcoming ID.Buzz microbus throwback. That means the ID.AERO could come with rear-wheel-drive or all-wheel-drive, and will allow for over-the-air updates. One thing worth mentioning, Volkswagen has announced future upgrades to the MEB platform, namely increasing charging speed from the current 135 kW to 200 kW or greater, and allowing for more range. While faster charging speeds haven’t been announced for the ID.AERO, there’s a good chance they’ll come along at some point in the ID.AERO’s life, if not from the start of production.

Speaking of production, Volkswagen’s taking an interesting approach with this one. The ID.AERO will first be released for the Chinese market, with European and American sales coming in 2024. This sleek new sedan is expected to play in a premium sector, so expect pricing on par with smaller luxury competition, sort of like how the Arteon compares to the Audi A4. Honestly, it’s bold as hell of Volkswagen to consider Arteon sales in America and want to do it again, so I commend them on their bravery. Either that, or the ghost of Ryan Dunn is running the product planning department.

So there we are, the Volkswagen ID.AERO, an air of reprieve from the crossover blahs. Not only is it set to carry the torch of all the tasteful sedans Volkswagen has produced, it might just work alongside Tesla’s S and 3 to save the full-size sedan. Honestly, I’m hoping more manufacturers see the benefits in electric sedans and liftbacks, and pivot away from crossovers in pursuit of range. Low hip points and small frontal areas are blessings for driving feel and range, and have the potential to be really fun when combined with the typical EV platform’s low center of gravity. Needless to say, I can’t wait for the production version of this thing to go on sale in 2024.

Thomas is a Nu Rave-blaring, heel-toe downshifting, maple syrup-swilling, chassis-geeking, junkyard parts-hauling, floppy-haired scenester who's been writing about cars since college. His current ride is a 2006 BMW 325i with the six-speed manual gearbox. Instagram: @thomas.hundal Twitter: @thomashundal
Read All My Posts »
PrevPreviousHow To Remove A Stuck and Rounded Lugnut: A Wrencher’s Worst Nightmare
NextCold Start: The Old Audi Pack Of Dogs PromoNext