I Found A Listing For A Grumman LLV With An Isuzu Engine And Frame. Help Me Understand If This Is Homemade Or A Legit Prototype

This morning, my wife sent me a listing for one of my dream cars, the Grumman LLV [Editor’s Note: … -DT]. I dismissed the listing because while the truck was clean, its dying Isuzu engine meant it would be yet another project, and I don’t want another project car. But before I closed the tab, curiosity struck. An Isuzu engine? That’s not what’s normally in these things. And there’s more than just an Isuzu engine, as the truck appears to be the familiar LLV postal truck body riding on a modified Isuzu Rodeo frame. What’s going on here?

Last month, my wife, Sheryl, learned that one of my dream cars is a Grumman Long Life Vehicle (LLV). If you’ve received a piece of mail just about any time in the past nearly four decades, chances are your mail carrier rolled up in one of these white trucks. These machines are an icon of the United States Postal Service and arguably as tied to the image of America, much like the Wienermobile or the Corvette. The LLV is an imperfect creation–one that drivers get baked in during the summer–but all of us at the Autopian are in love with them. I’m sure we’d eaxh take one if a bunch ever came up for sale.

Personally, I’d love to take an LLV and make it a mobile motorcycle garage, or perhaps a tiny camper. I’d love to just drive the little guy around, foot hanging on the propped-open sliding door’s sill like I’m driving a Jeep. Heck, these would probably be pretty fun Gambler 500 vehicles, too. Sadly, right now it seems difficult to find these trucks for sale. Seeing my disappointment in not finding any to buy, Sheryl set Facebook to notify her whenever one came up for sale. One popped up yesterday, and it’s different than you’d expect. 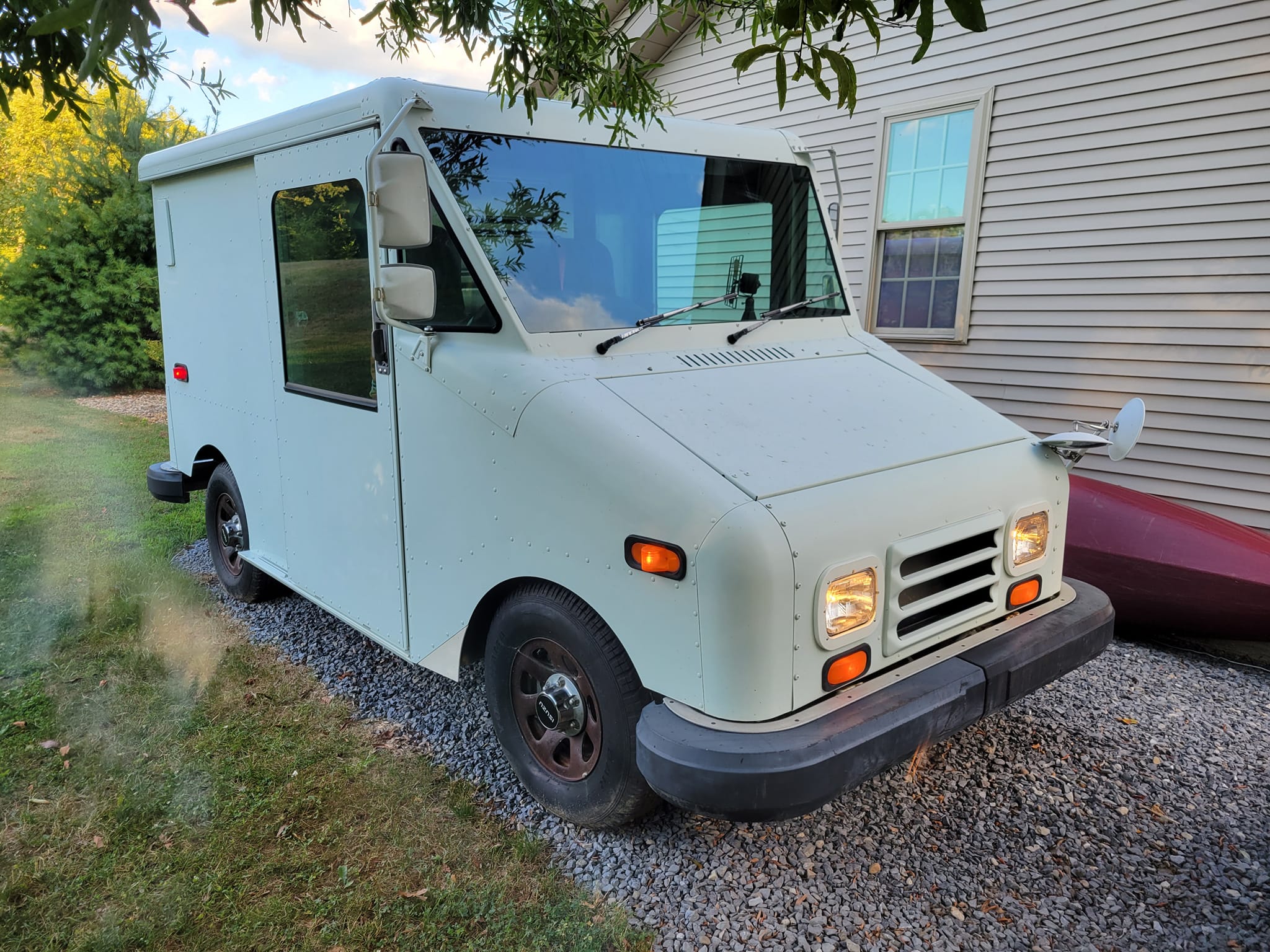 Posted on the public Grumman Olson Kubvan Owners Facebook group yesterday is an LLV that at first sight looks pretty mint. It wears a body cleaner than some of the trucks currently in service and the seller claims that it has just 27 miles on its odometer. Then things immediately get weird.

The seller says that under the aluminum body is not the Chevrolet S-10 and Iron Duke that would normally be there. And there isn’t the later LN2 four-cylinder, either. No, under the hood of this truck is an Isuzu 6VD1 3.2-liter V6. And the chassis? A code engraved on it suggests that the box is riding on an Isuzu Rodeo’s chassis. 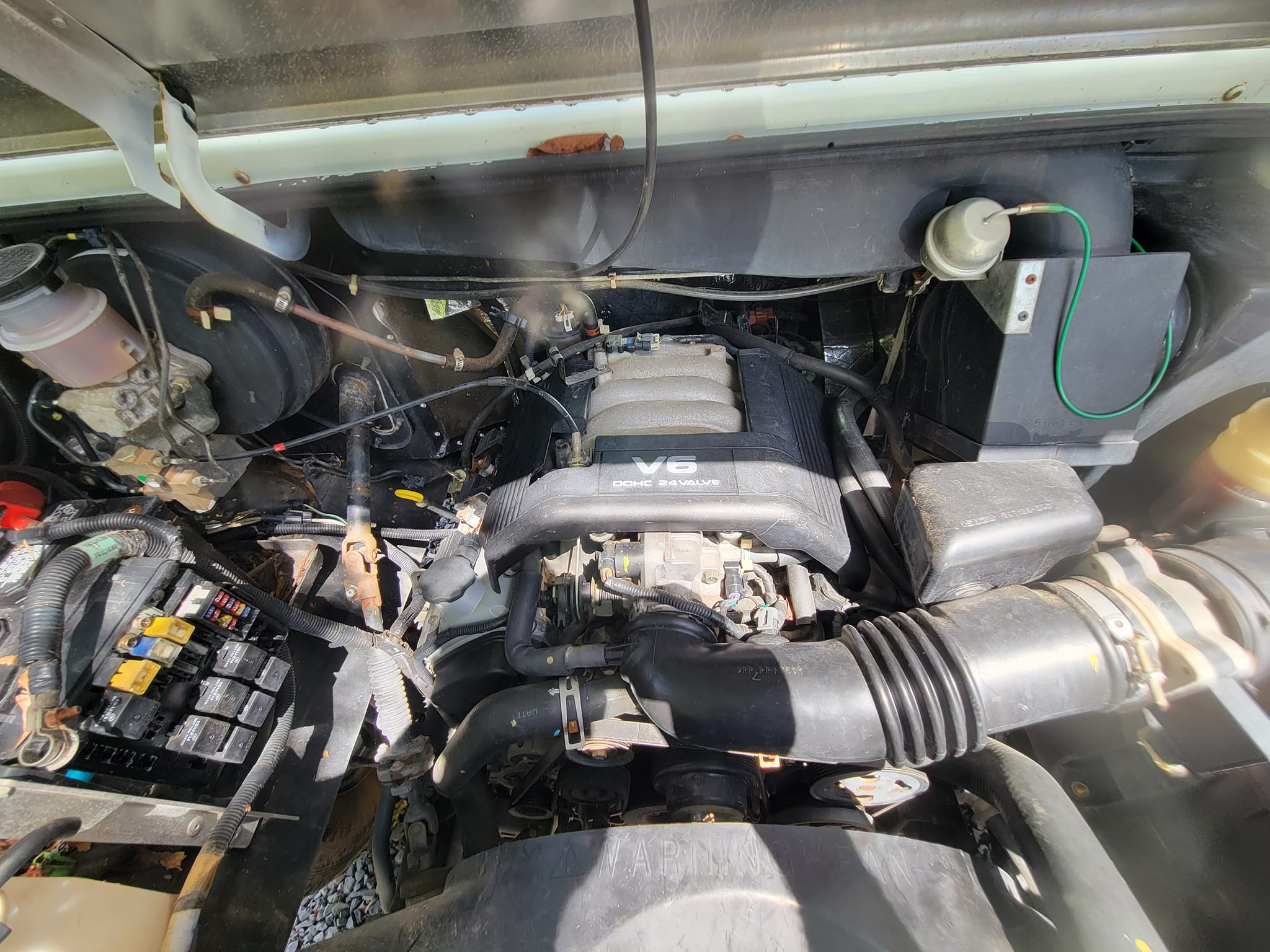 As the Smithsonian National Postal Museum writes, when the United States Postal Service needed new vehicles, it used to choose an off-the-shelf vehicle. If you’ve read David’s work for long enough then you’re aware of the Jeep Dispatcher, a little mail-hauling Jeep that served postal duty for many years. When the 1980s rolled around, the USPS was looking to replace the Dispatcher, and this time, the postal service wanted to do something different. Postal officials sought to create the perfect mail truck, and gave manufacturers these requirements, from the Smithsonian:

Officials required that the manufacturers produce a vehicle with a weather-tight aluminum alloy body. The body had to be easy to enter and exit for carriers ranging from 4’11” tall to those standing at 6’2” and 210 pounds. Finally, and most importantly, the vehicle had to be able to run twenty hours a day, seven days a week, month after month, year after year.

In the end, Grumman won out, and the Chevrolet S-10-based Long Life Vehicle went into service starting in 1987. The LLV was a smashing success for Grumman, so much that in 2011, the U.S. Government Accountability Office noted that there were about 141,000 of them still in service. And those trucks are running on those old S-10 bones. 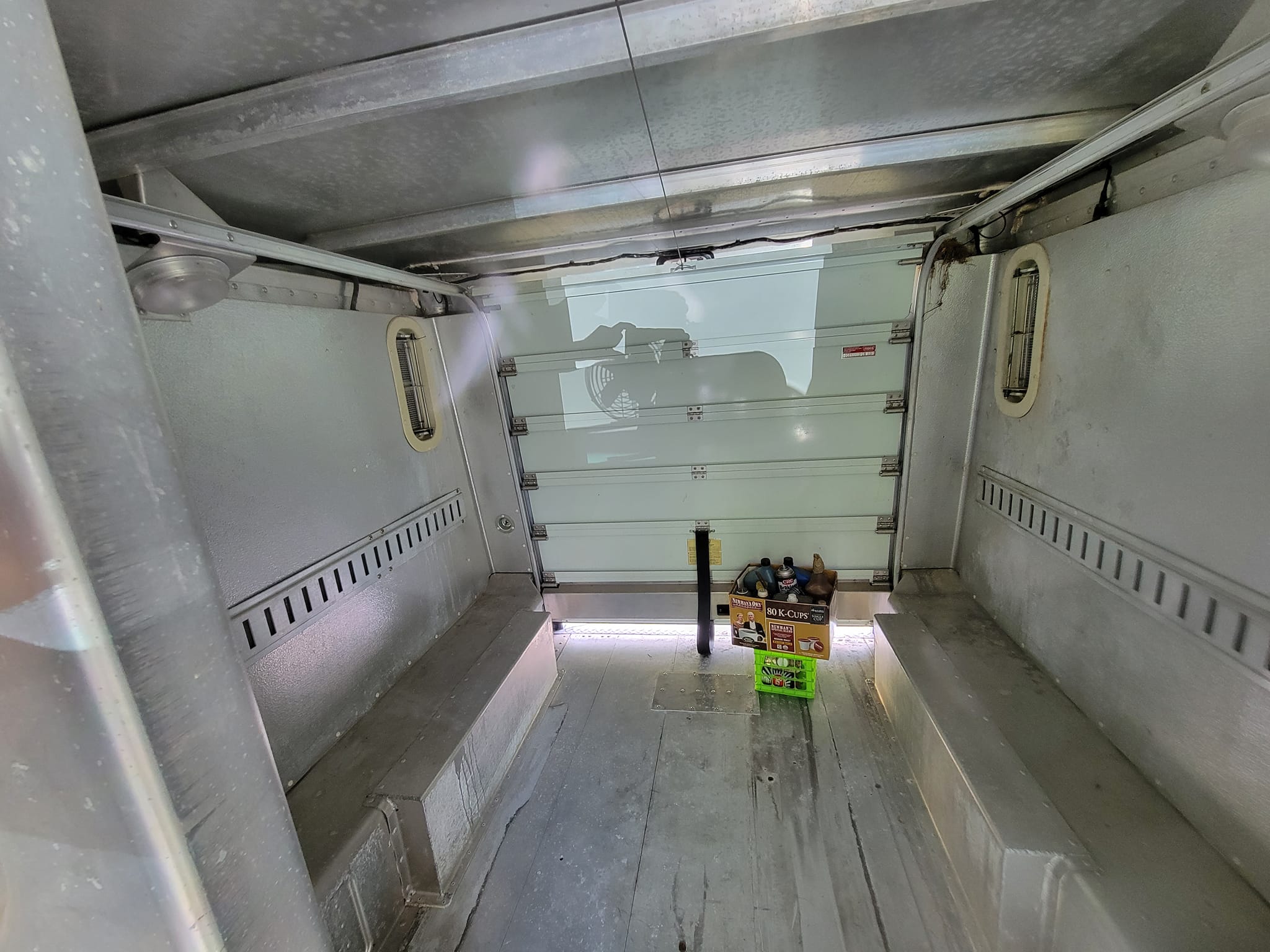 In a 1987 issue of Grumman World, Grumman Allied Division President Ron Peterson told the paper that Grumman was brewing up a commercial version of the LLV. The commercial version was going to be different from the USPS version by having a choice of options like paint schemes. It wasn’t even going to be built in the same factory. It looked like this truck was going to be the spiritual successor to the Volkswagen-powered KubVan. In that interview, Peterson noted that Grumman had built prototypes based on an Isuzu chassis. Sure enough, as the Los Angeles Times reported in 1986, Isuzu and Grumman entered into a partnership to create walk-in delivery trucks.

[Author’s note: A previous version of this story noted that Grumman was looking to create a sports car. As it turns out, I got caught up in one of Jason Torchinsky’s weird completely made-up histories. You got me again, Jason!]

Alright, so is this a prototype for that venture? Well, I’m not sure. When you look at the engine under the hood of this LLV, it’s clearly an Isuzu V engine from the 1990s. And when you look at the underbody and pull the code etched on the frame (UER25FW-4110361) you’ll get results for the Isuzu Wizard, which was sold in America as the Rodeo. 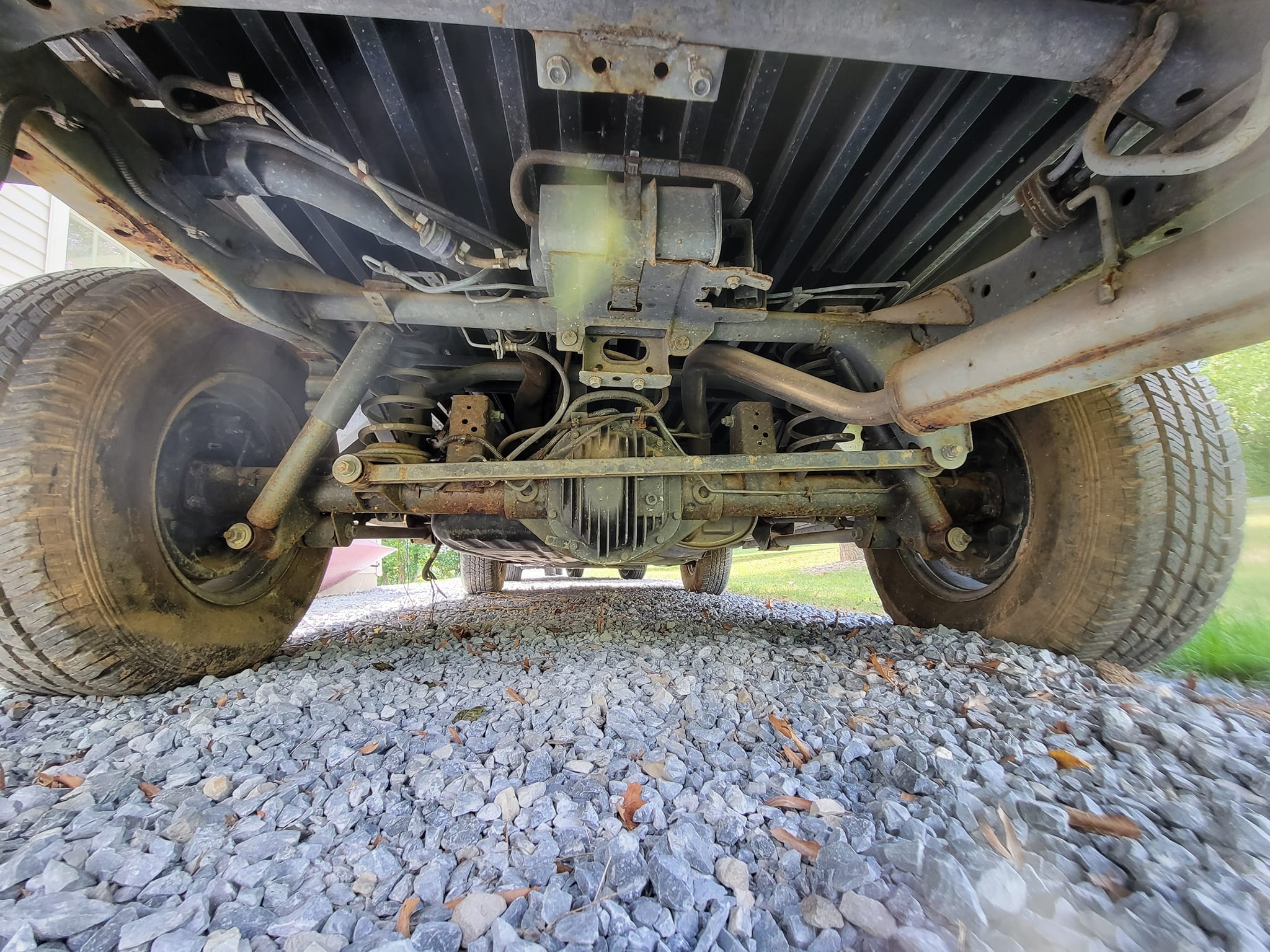 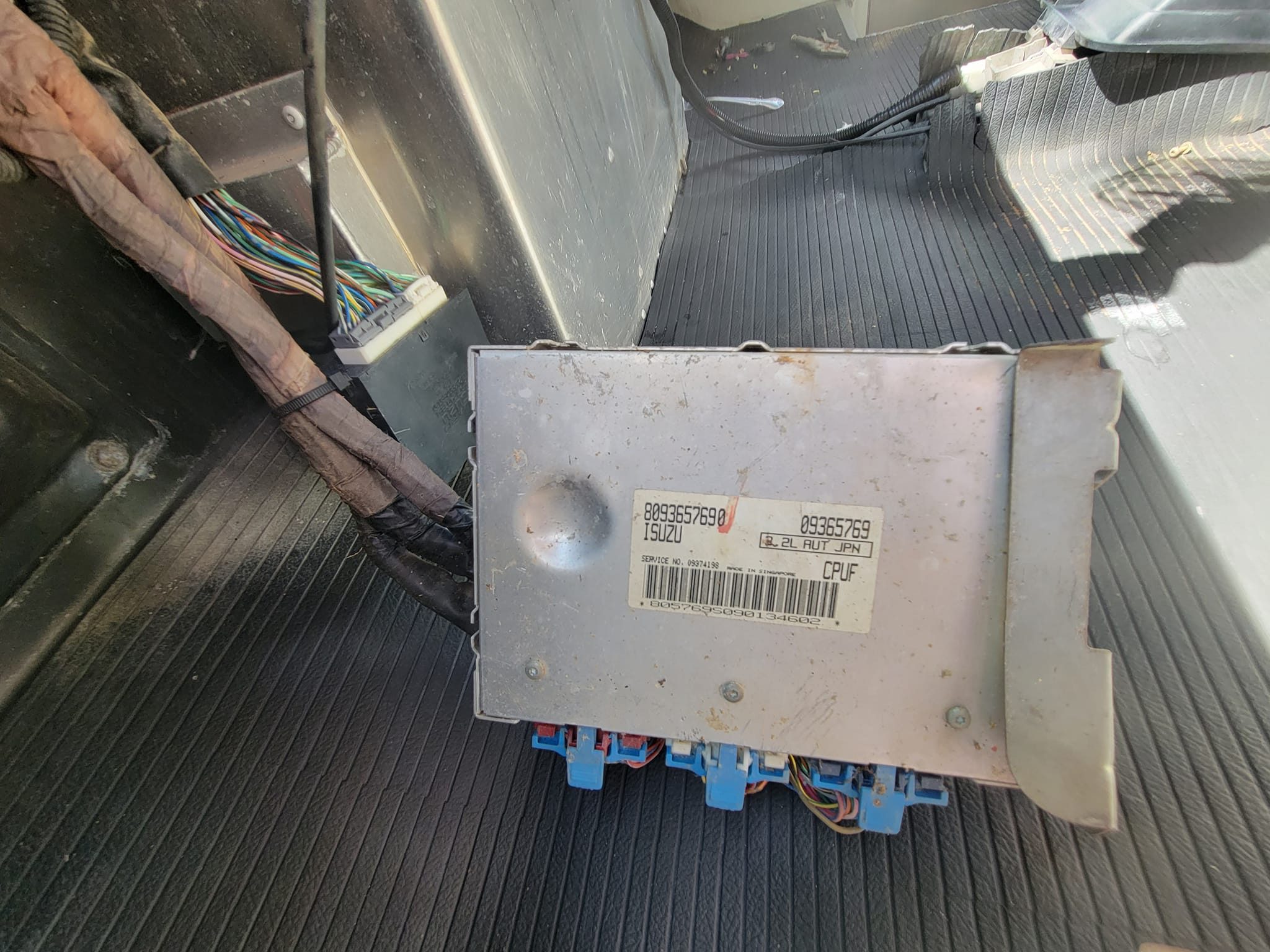 The Isuzu parts continue inside, where you’re presented with parts of a Rodeo’s dashboard, steering wheel, and shifter. This particular dash design was introduced during 1995. The seller thinks that this is a prototype from 1998 or 1999, making it younger than any normal LLV. If true, that means that this truck has 205 HP going to its rear wheels, far more than the about 90 ponies offered in the USPS LLVs. 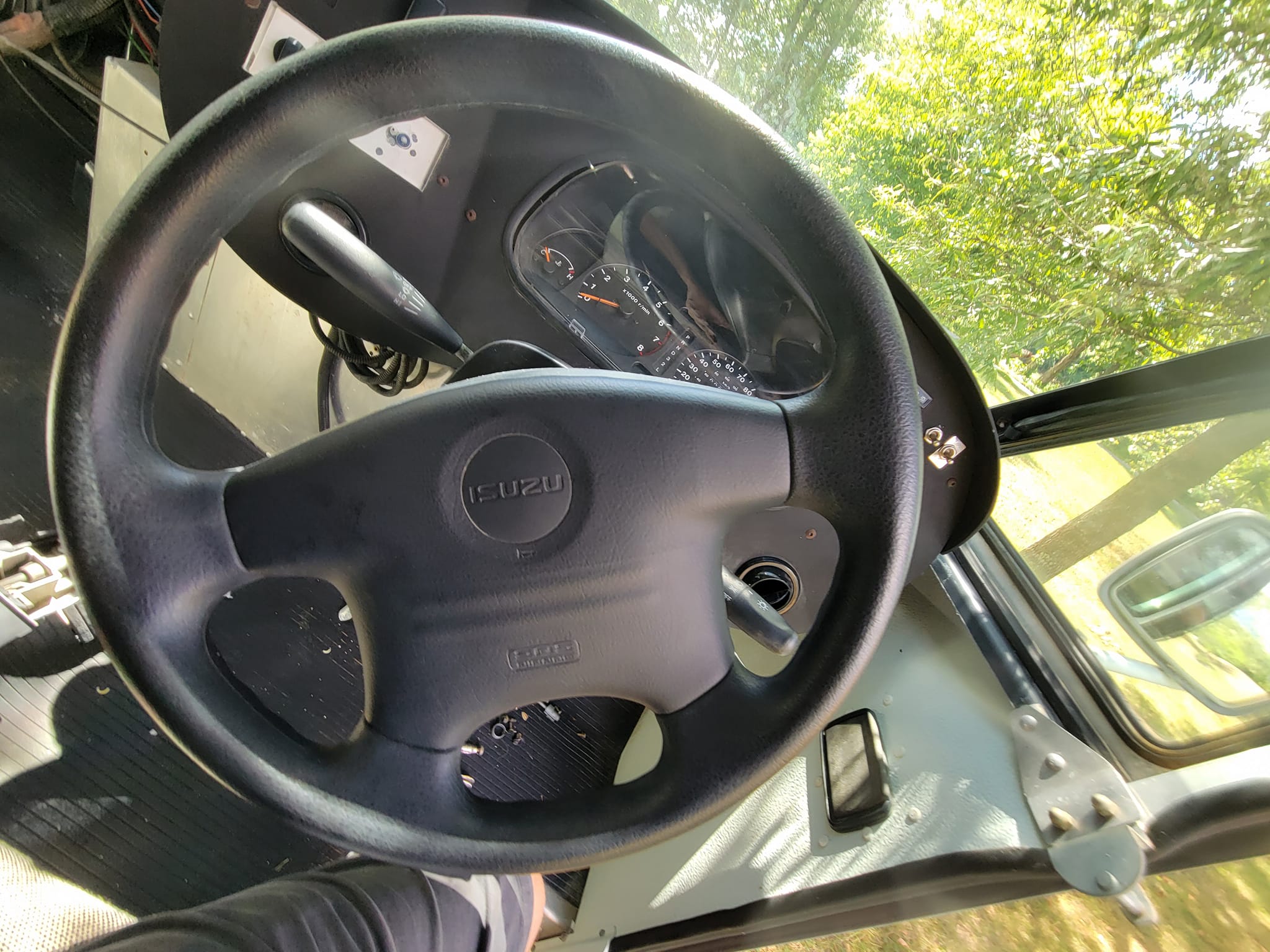 Well, at one point it may have had that much power. While there’s just 27 miles indicated on the odometer, the engine apparently has a bad knock. So, it’s living on borrowed time. It’s unclear why this engine is in such bad shape.

A few of us in the Autopian office tried to figure this truck out. We’ve found that the LLV’s wheelbase (100.5 inches) is shorter than the 106.4-inch wheelbase of the 1998 Isuzu Rodeo. Older Rodeos have two additional inches of wheelbase. And just for another comparison, the Amigo, a sibling of the Rodeo, rode on a 96.9-inch wheelbase in 1998. 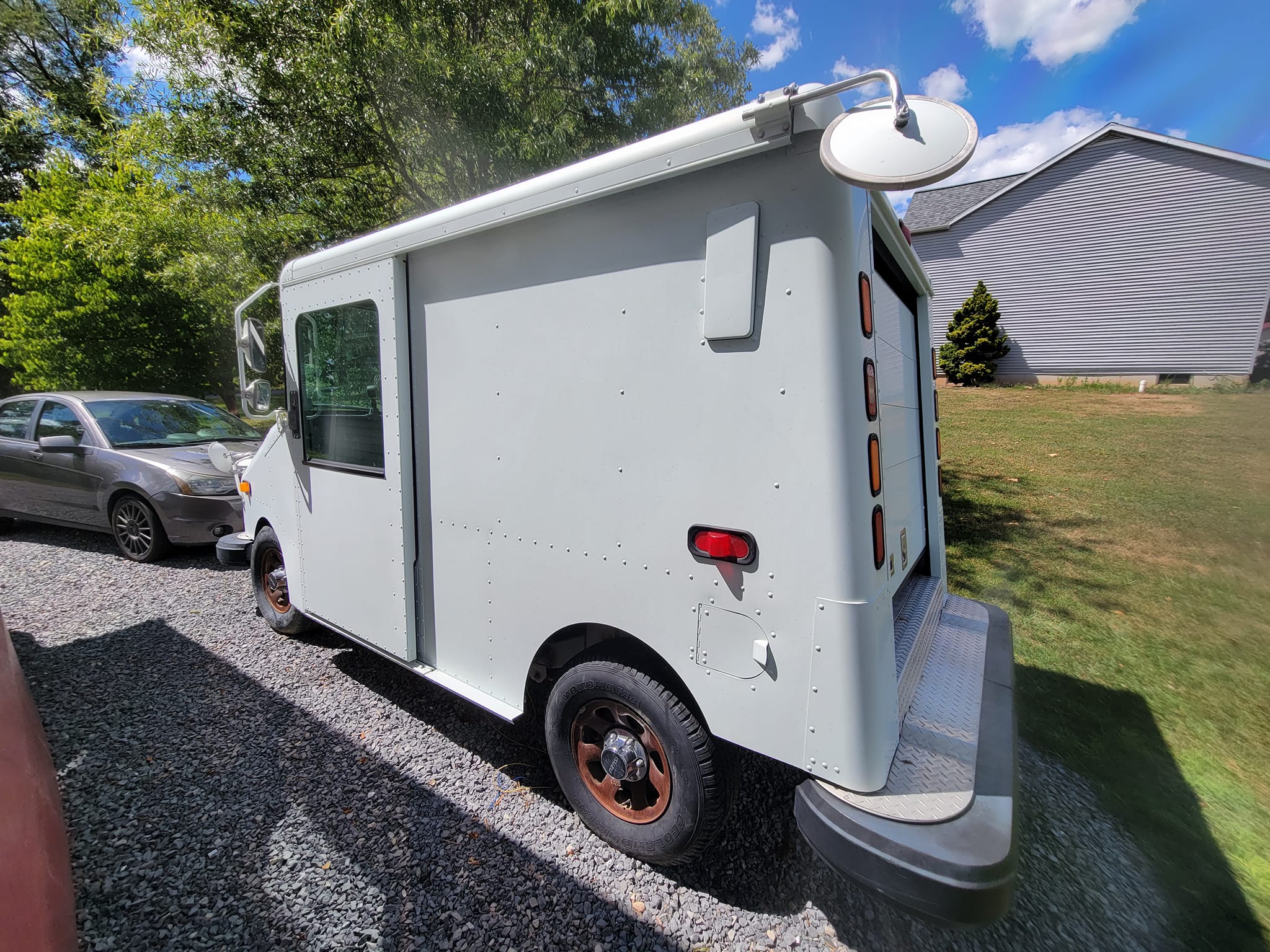 Looking closer at the pictures, it looks like this truck is ever so slightly longer in the middle than a regular LLV. For an unscientific test, I counted the number of rivets between rear wheel well and the door. A regular LLV has seven, but this has nine. It seems that the LLV body was stretched to fit the longer Isuzu wheel base. And considering how well done it is, I think that this was a factory job.

This truck is seemingly a decade newer than Grumman’s plan to enter into the commercial market. I tried to find some sort of explanation for its existence, but have come up empty. Grumman wanted to sell the LLV to commercial delivery operators, but it seems that this didn’t go as planned. Is this a second attempt to enter the LLV into commercial market?

This is where you sleuths may help us. Do you know anything about this truck? If so, we want to know! Otherwise, you can pick it up for $3,500 from the seller in central Pennsylvania. The little truck was listed once back in August without any bites. This time, it seems LLV fans want it. So if you want it, you might have to move fast.

(Photos to the seller unless otherwise noted.)

Mercedes is a lifelong fan of all things powered by an engine. When she isn't driving one of her five Smart Fortwos or her 14 other vehicles she could be found in the cockpit of a Cessna 172 or perhaps swimming in any body of water that she could find. She also has a deep love for buses of all kinds. Please send her buses. mercedes@theautopian.com Instagram: @mistymotors Twitter: @Miss_Mercedes30 Facebook.com/neonspinnazz
Read All My Posts »
PrevPreviousThe 2023 Kia Telluride X-Line And X-Pro Are People Haulers For Off-Road Adjacent People
NextSomething About Those Eyes: Cold StartNext