It seemed like an easy enough job. A random guy on Facebook Marketplace named Florentin seemed to be in dire straits, and came to me for a helping hand. “I was able to do front shocks, swap the torsion bars, and got stuck on the rear shocks,” he messaged me. “I took the AHC lines off but couldn’t get the rear shocks off myself…Would you have any interest to come see if you finish this for me?” I said sure. I figured it couldn’t be that hard to remove some shocks, so I decided to swing by Florentin’s place last night. Things didn’t go well.

Upon reading my story on Monday about how a random person had hit me up on Facebook to see if I could help fix his car, a lot of you seemed concerned. Reader “MiniDave” wrote that fixing a random person’s vehicle is too much of a liability concern, writing:

Send the car to a shop, the potential liability on this is huge. What if something (that you never touched) breaks/falls apart/comes off and he hits a busload of kids and nuns on their way to school?

I used to be happy to help folks with their stuff, now I only work on my own…..it’s a sad thing, but I just can’t do it anymore….too many crazies with guns and lawyers out there now.

You have considered this sounds like a trap, right?

I can see a meeting among several sinister types set in a dark smoky lounge…”we have the perfect bait! He won’t be able to resist!” Cue evil laughter all around

My mom even called me after reading the article, saying it seemed risky, and advising me not to do it. Plus I got this message from my dad:

Dave, read your article about repairing Florian’s [sic] car. I think it is a kind act, but you have to careful being overtrusting with strangers. It does sound odd

but I know you want to always help others in dire straits.

I appreciate everyone’s concern, of course. And maybe you’re all right — I am a bit too trusting, and that has bitten me hard in the arse a few times. But I’ll gladly take a few tooth-scars in the buttocks over a belief that this world is filled with untrustworthy people out to take advantage of one another. Rejecting that idea is a key part of who I am, and I hope that, as I get older and I receive new “scars,” I can remember that this way of seeing the world is worth it.

It has been for me so far, at least. Florentin, a guy I’d never met, ended up being an absolute mensch. Born and raised in Romania, a beautiful country I’d visited a few years ago, he also lived in Germany (where I grew up) and spoke solid German. We bonded over that, and we enjoyed some excellent pizza with his wife and hilarious young daughter.

We also commiserated over what has to be the most difficult shock replacement in history — even worse than the dreaded Jeep Cherokee XJ rear shock replacement, which requires hammering weld nuts out with an air chisel.

Look at this crap: 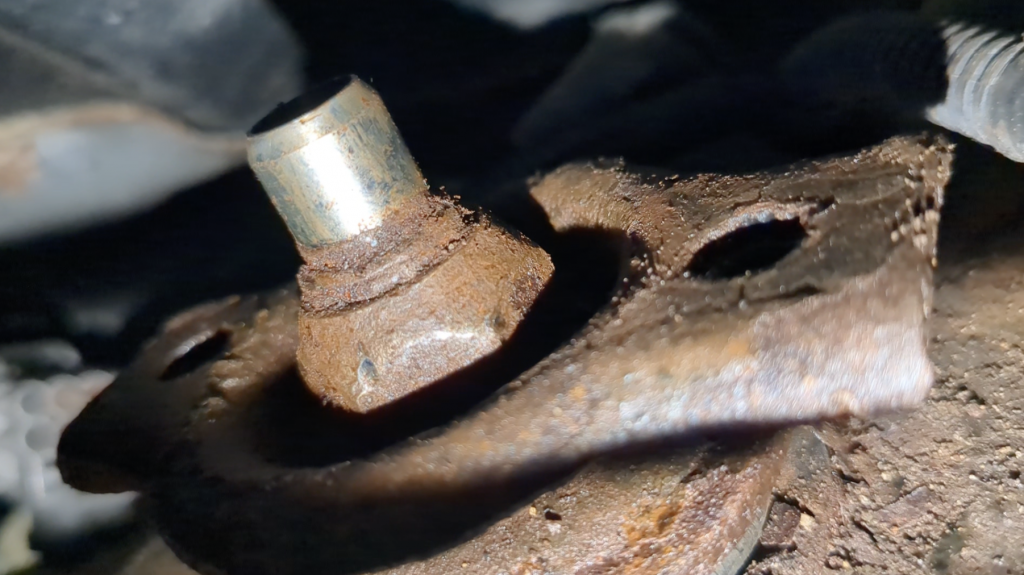 Check out rear upper shock nut above. Notice how it’s actually recessed inside a bracket. This means a regular box wrench won’t work, since it’d only be able to grab the top millimeter or so of the nut that sits above the bracket. That might make you think a socket would work; nope, that stud is too long, so the socket wouldn’t reach. What about a deep-well? Sadly, there’s just no room above the shocks to get a deep well socket in there; the socket wrench would hit the underbody/floor.

Unfortunately, the ones we bought from Harbor Freight had too big of an offset, so they didn’t fit above the shock, either. That led us to buy a pass-through socket wrench like this one:

This was, without question, the perfect tool for the job. It allowed us to reach down into the recess to grab the nut without adding a bunch of length above the shock that would hit the body/floor. Plus, it could ratchet, making the extraction much quicker in theory. 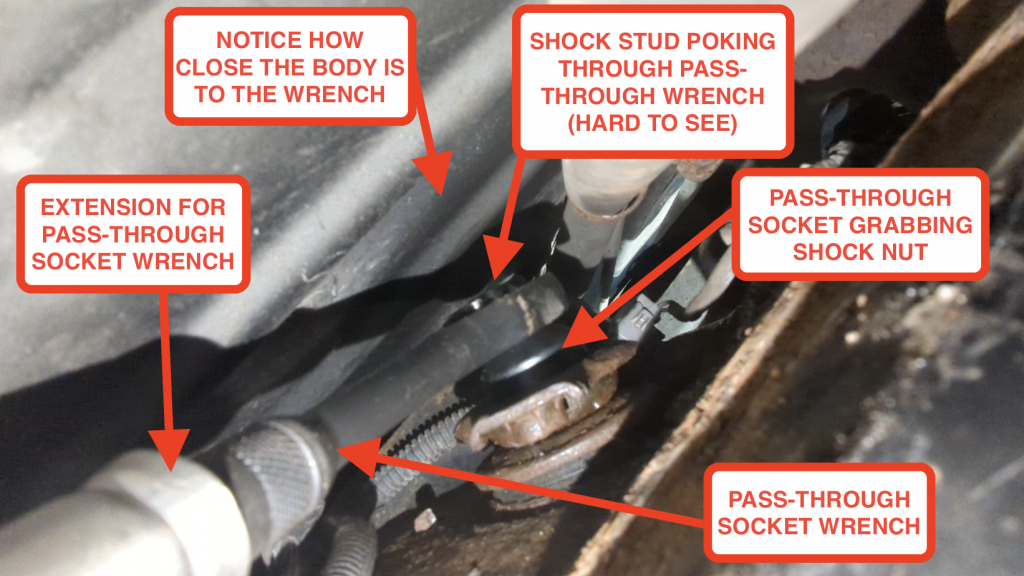 To give a bit of spacial context, the shocks on a 100 Series Land Cruiser span from brackets hanging low off the rear axle up into spring mounts that span two frame crossmembers  — one ahead of the rear axle and one behind. The crossmembers sit right up against the body, so there’s really very little room between where the shocks mount and the bottom of the cargo area floor. You can see the lower mounts on the axle and the rearmost crossmember here: 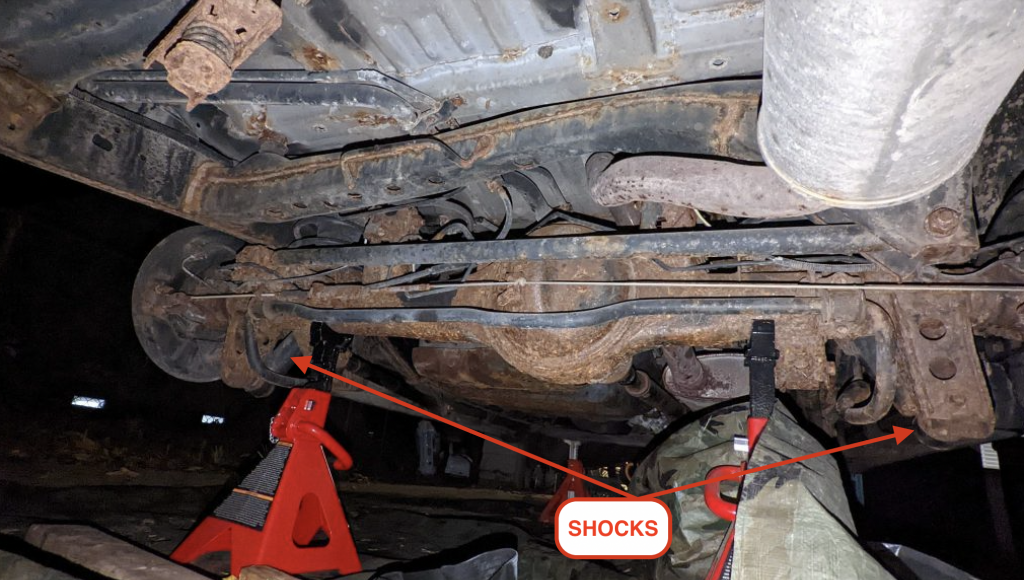 AnHere’s a look at just the frame — you can see that the spring mount connects two crossmembers. Notice the nuts threaded onto the shock studs poking through:

Here’s a look from in front of the axle on the passenger’s side of the car. You can see the shock reaching up past the frame rail, where it meets the spring mount spanning the crossmembers: 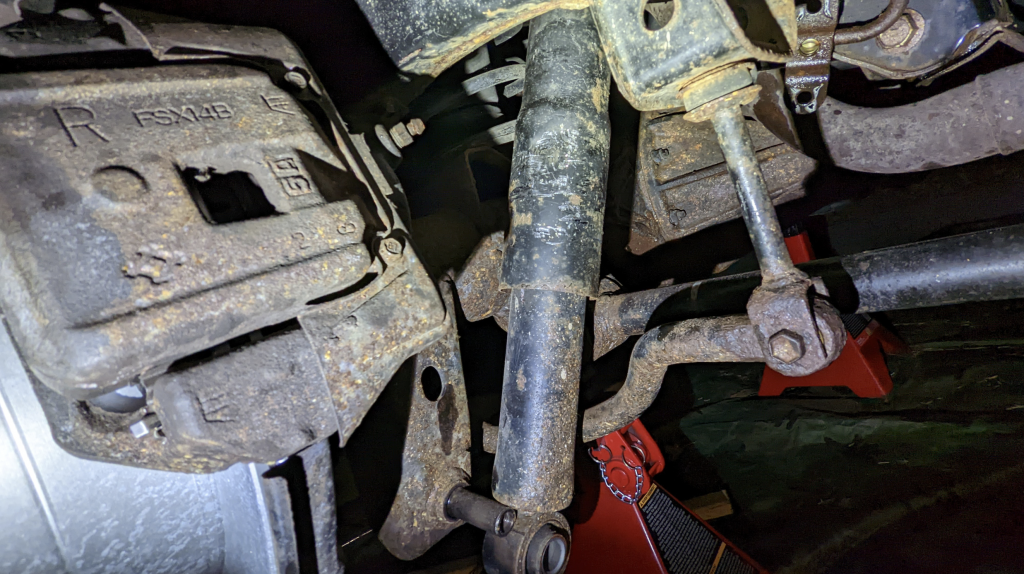 Looking from underneath, just ahead of the rear axle on the right side of the car, you can see how bad access to these nuts is. Here you can see the wrench behind the driveshaft and muffler, right up against the floor of the vehicle, just above that front crossmember: 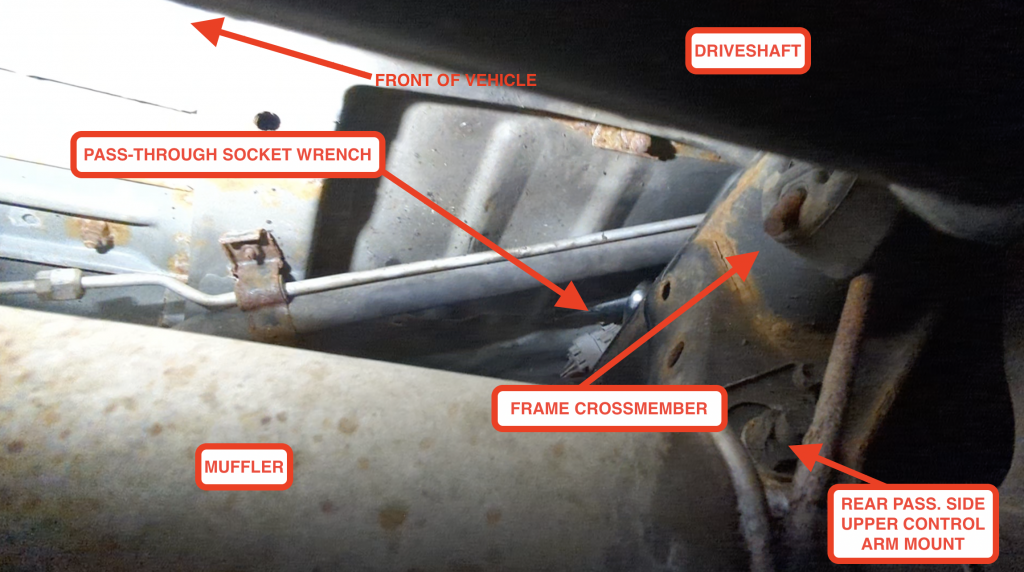 Here’s a look down the barrel of the wrench: 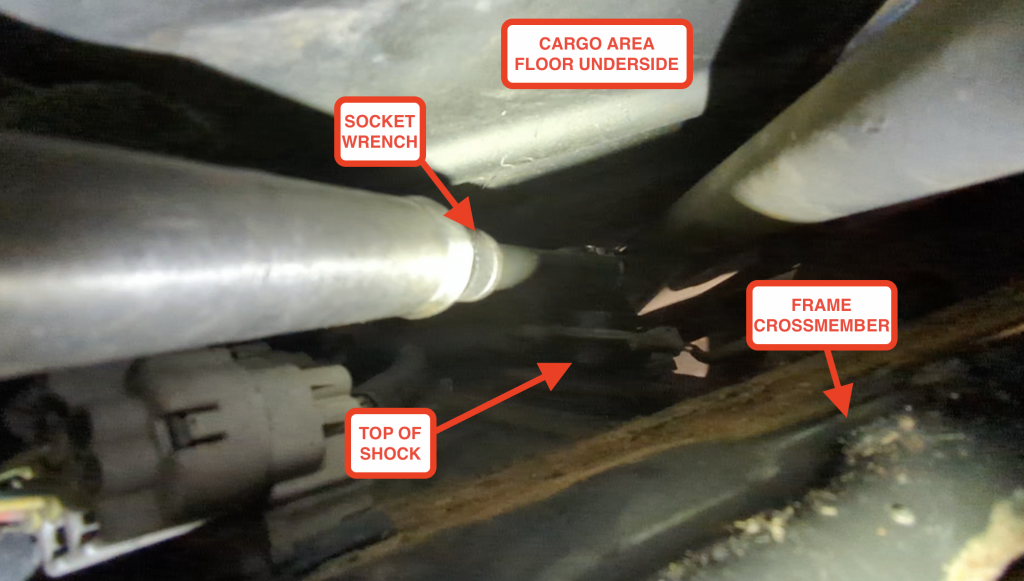 Here’s what the shock mount looks like from underneath: 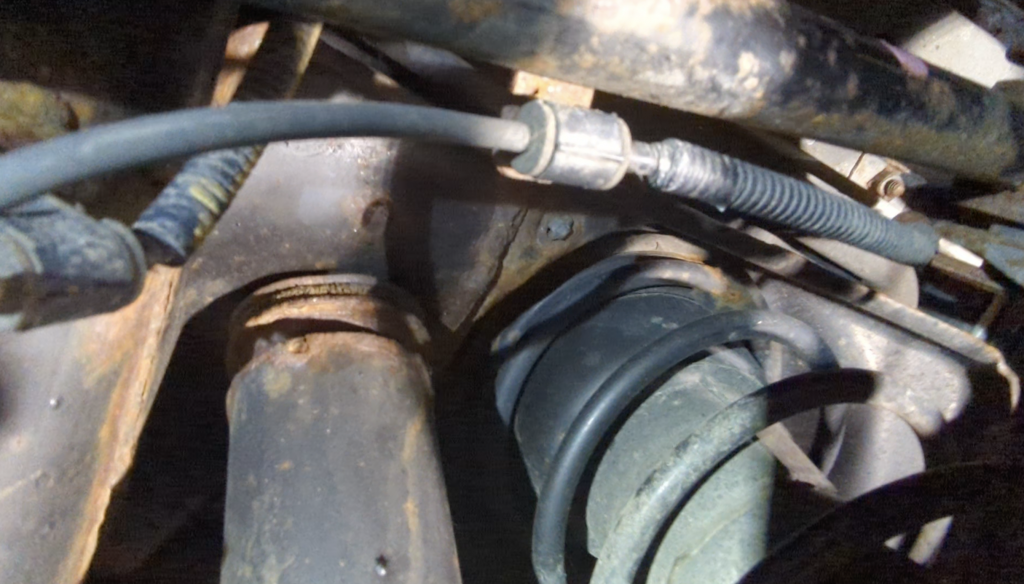 On the plus side, we managed to get the driver’s side shock out, since access there was much better: 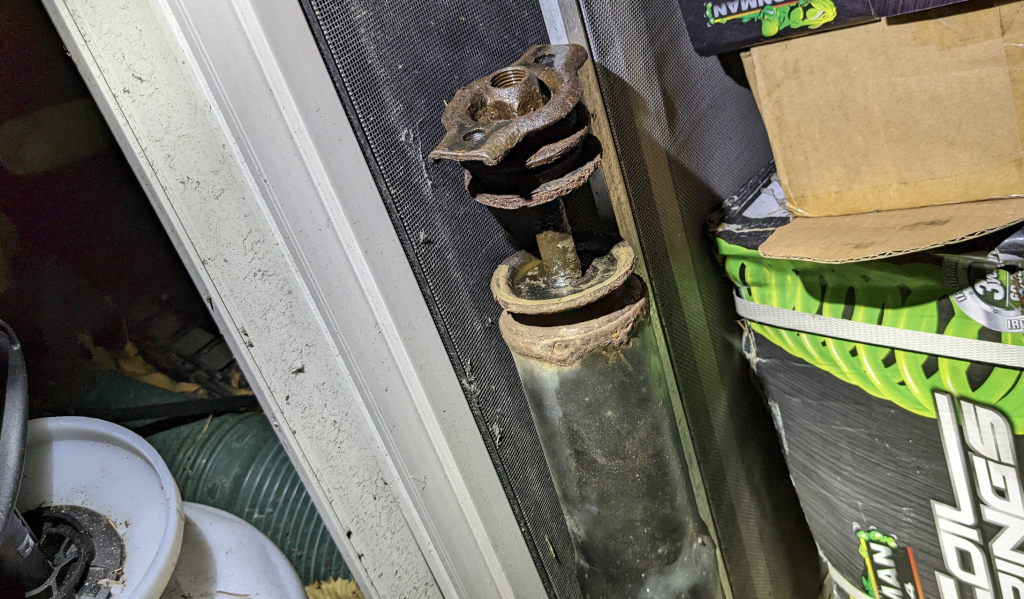 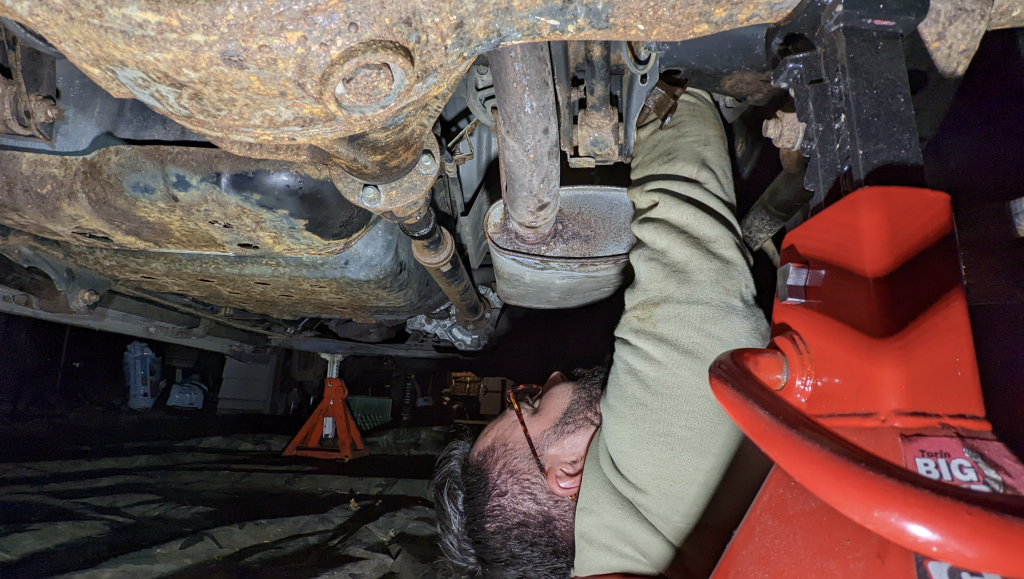 Florentin and I tried grabbing the wrench from as close to the frame rail as we could, outboard of the muffler, but that meant we could only use our forearm and wrist to try to spin that ratchet. What I did was put my arm between the driveshaft and muffler, and then pull that ratchet as hard as I could. But as you can see in the image above, that’s a pretty tight gap, and it limited my range of motion to just how many degrees my elbow could swing, which wasn’t enough.

Florentin and I tried removing this rusty shock for hours. He slid a wrench through a gap in the wheel-well between the body and frame, and then slid that wrench onto the socket wrench we were using to try to remove the nut. Then he hammered the wrench, applying a force to the socket wrench, torquing the socket — but no dice. The nut wouldn’t move.

We put our arms in different orientations to get more force on the ratchet, we used a small breaker bar, we traded places between holding the shock from spinning and cranking on that rusty nut. None of it worked. I drove home defeated last night, upset at only having helped Florentin remove a single shock.

I think if we’d removed the driveshaft we’d have gained ourselves a bit more force on that ratchet, and if we’d cut the outside of that shock or drilled into it we could have better held it from spinning with a screwdriver or vice grip. I just asked Florentin to buy a big vice grip to hold the outer shock housing. This thing:

I think between that big vice grip and the removal of the rear driveshaft from the pinion flange, we’ll be able to finally extract this dastardly damper. But my god what a horrible design from Toyota.

Rust-loving Jeep man, cofounder and EIC of The Autopian, Jason's friend. Email: david@autopian.com
Read All My Posts »
PrevPreviousYou’re All Invited To Eat A Literal Wheelbarrow Full Of Shrimp At The Autopian’s LA Auto Show Party Next Week
NextJeepsters Seemed To Have The Ability To Control The Minds Of Small Crowds: Cold StartNext