Why I Bought A Dilapidated Kangaroo-Hunting Ute Sight Unseen In The Middle Of Nowhere, Australia

“It’s about two-thirds the height of a standard beer can,” Australian Autopian reader Laurence Rogers told me over a video chat, describing the diameter of a giant Huntsman spider he lets crawl freely around his house in New South Wales. I had just agreed to spend a month with him fixing a 1969 Chrysler Valiant kangaroo-hunting ute he’d bought for $900 on my behalf, and I was now deeply regretting my choice.

To be clear, I will not be hunting any “roos” (as he calls them). The only hunting that will take place during my trip to the center of New South Wales later this year will involve this spider hunting me, possibly in my sleep: 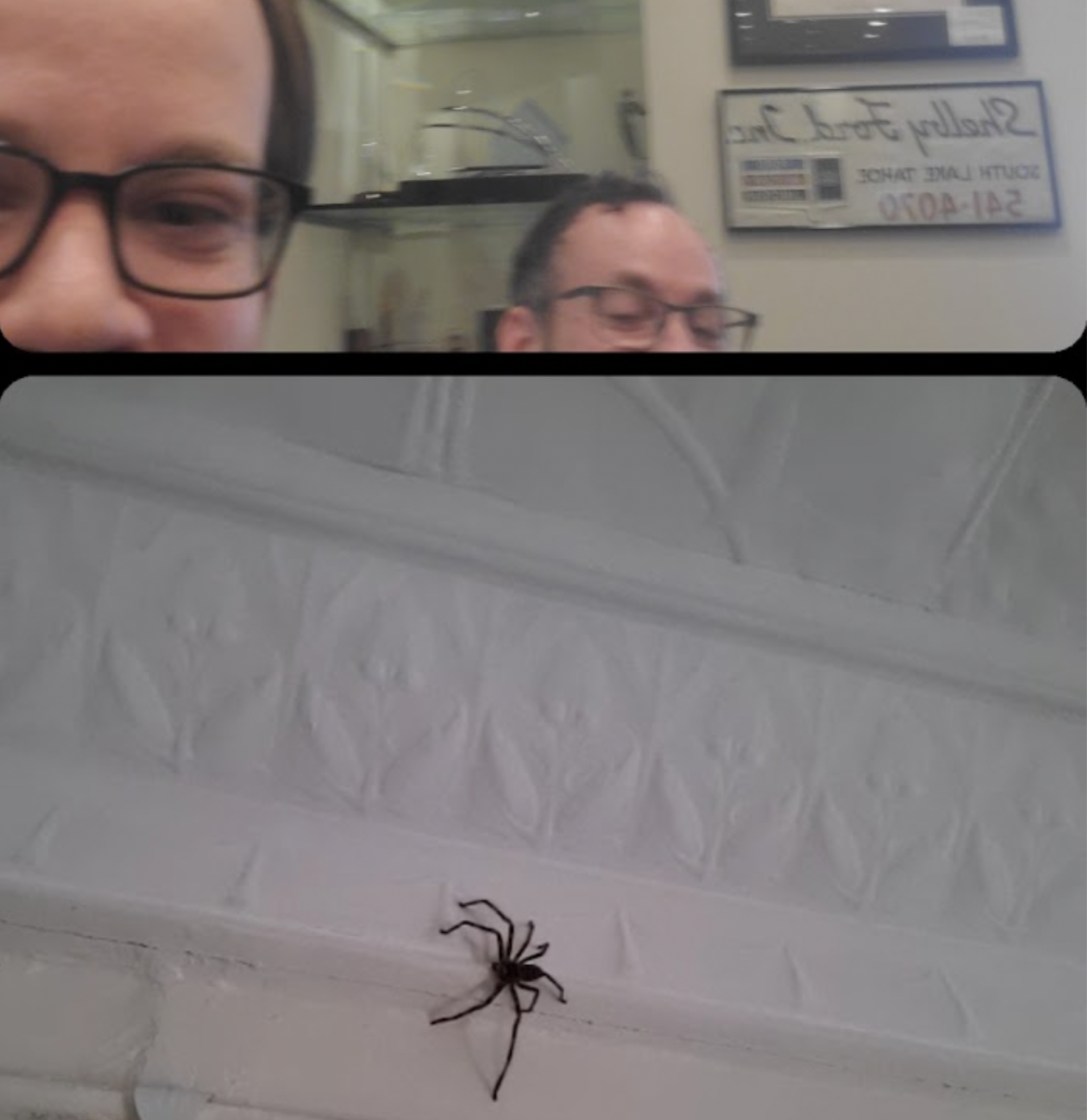 You thought I was kidding about that Huntsman spider, eh? That’s okay; I, too, figured Laurence was joking, but as shown in the video-chat screenshot above, the crazy bastard actually does live harmoniously with enormous, frighteningly-quick arachnids. It’s been nice knowing you, folks. 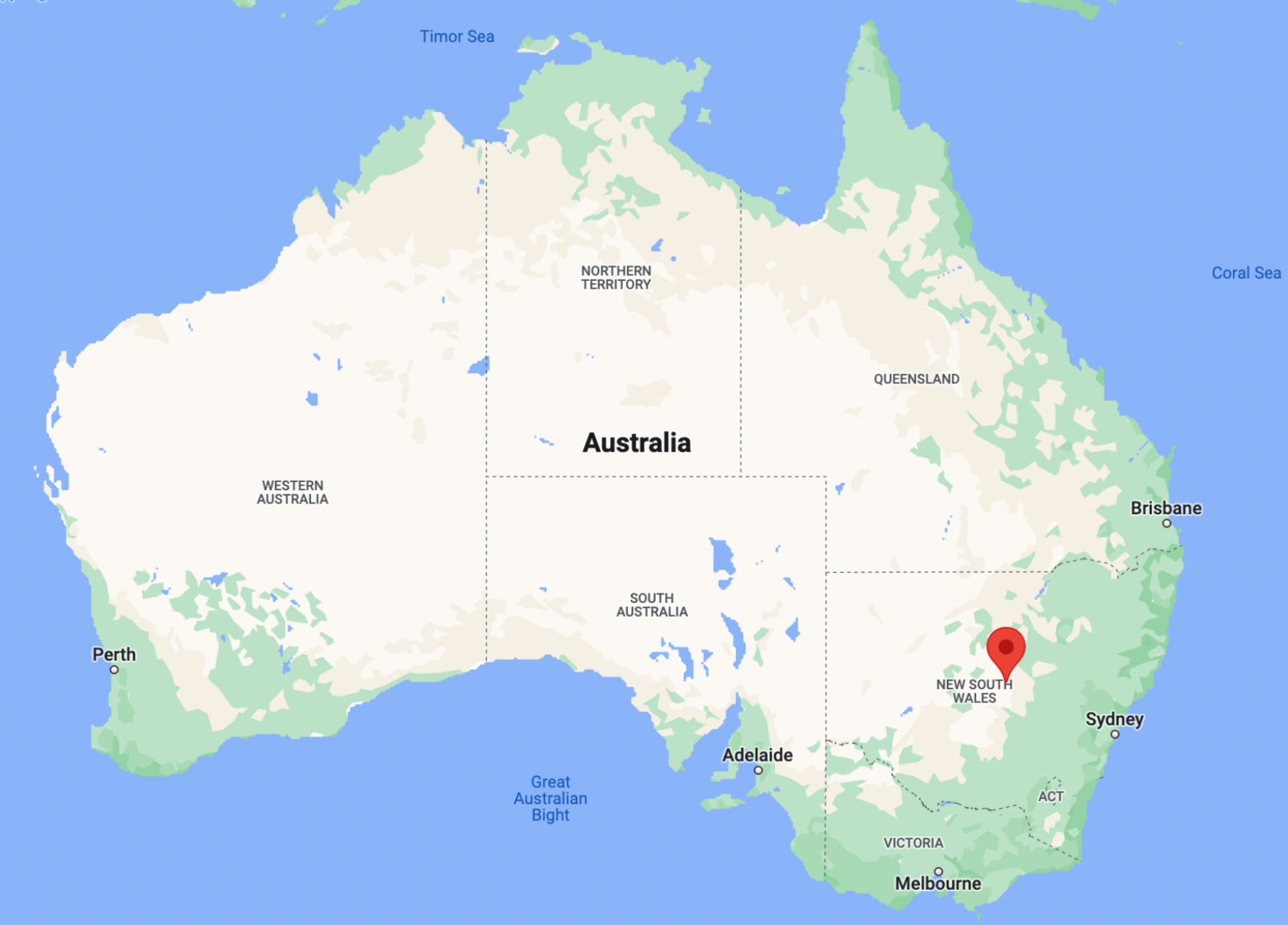 Anyway, let’s back up for a second and talk about how I ended up the owner of a 1969 Chrysler Valiant ute located in the Australian bush.

These things just…happen. One moment I’m chatting with a new friend on social media, then they’re telling me about a cool, dirt-cheap vehicle they’ve found nearby, then I black out, and the next thing I know I’ve wired money to a stranger 10,000 miles away. It seems like a bad thing to make a habit of, but then again, just look at this glorious machine!: 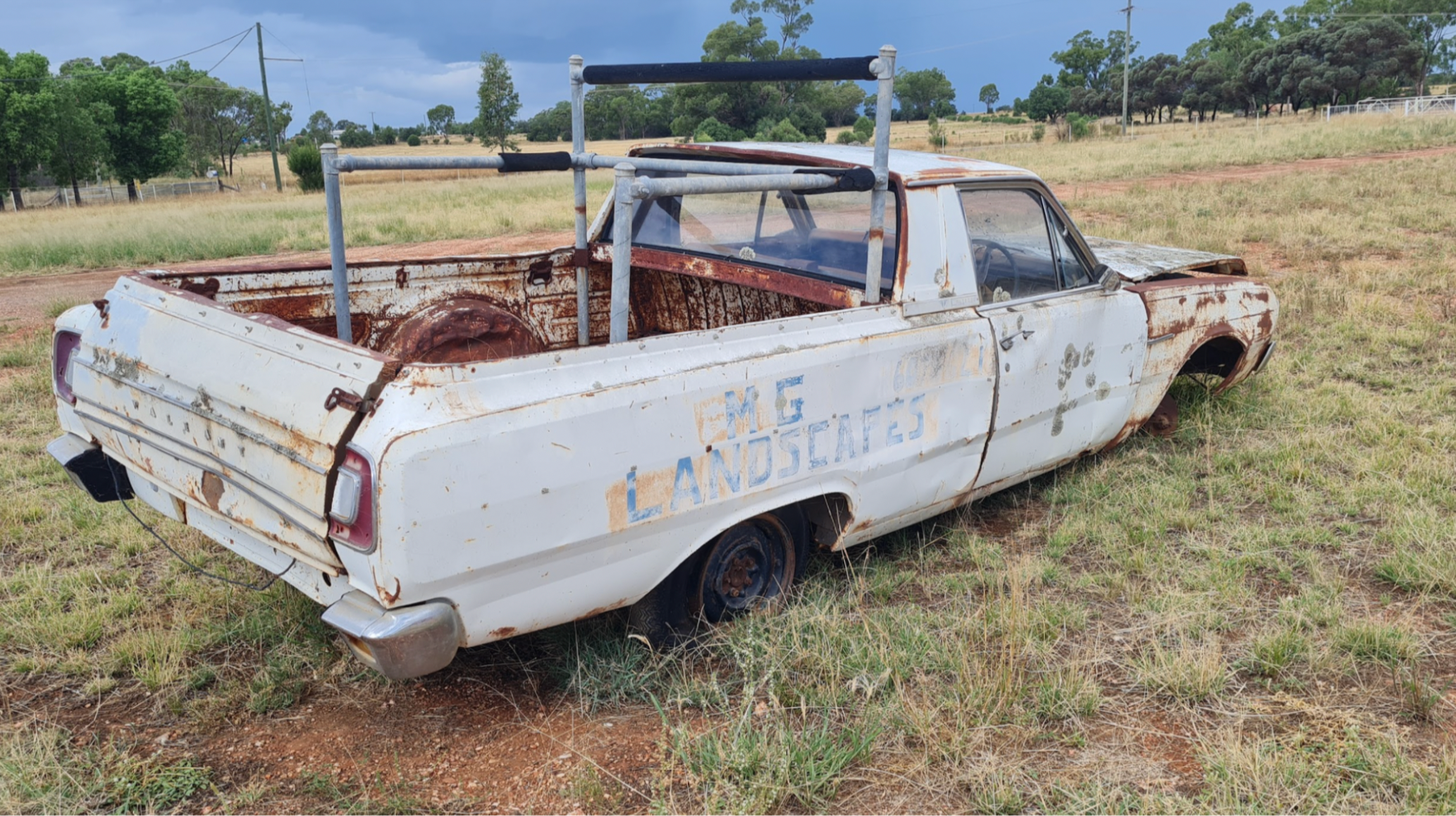 Check out the scaffolding in the back. Laurence, owner of a 1970 “VG” Valiant Wayfarer and a 1974 “VJ” Valiant Charger, tells me that it’s there to facilitate kangaroo hunting. I guess one would rest a weapon on the foam to stabilize a shot? 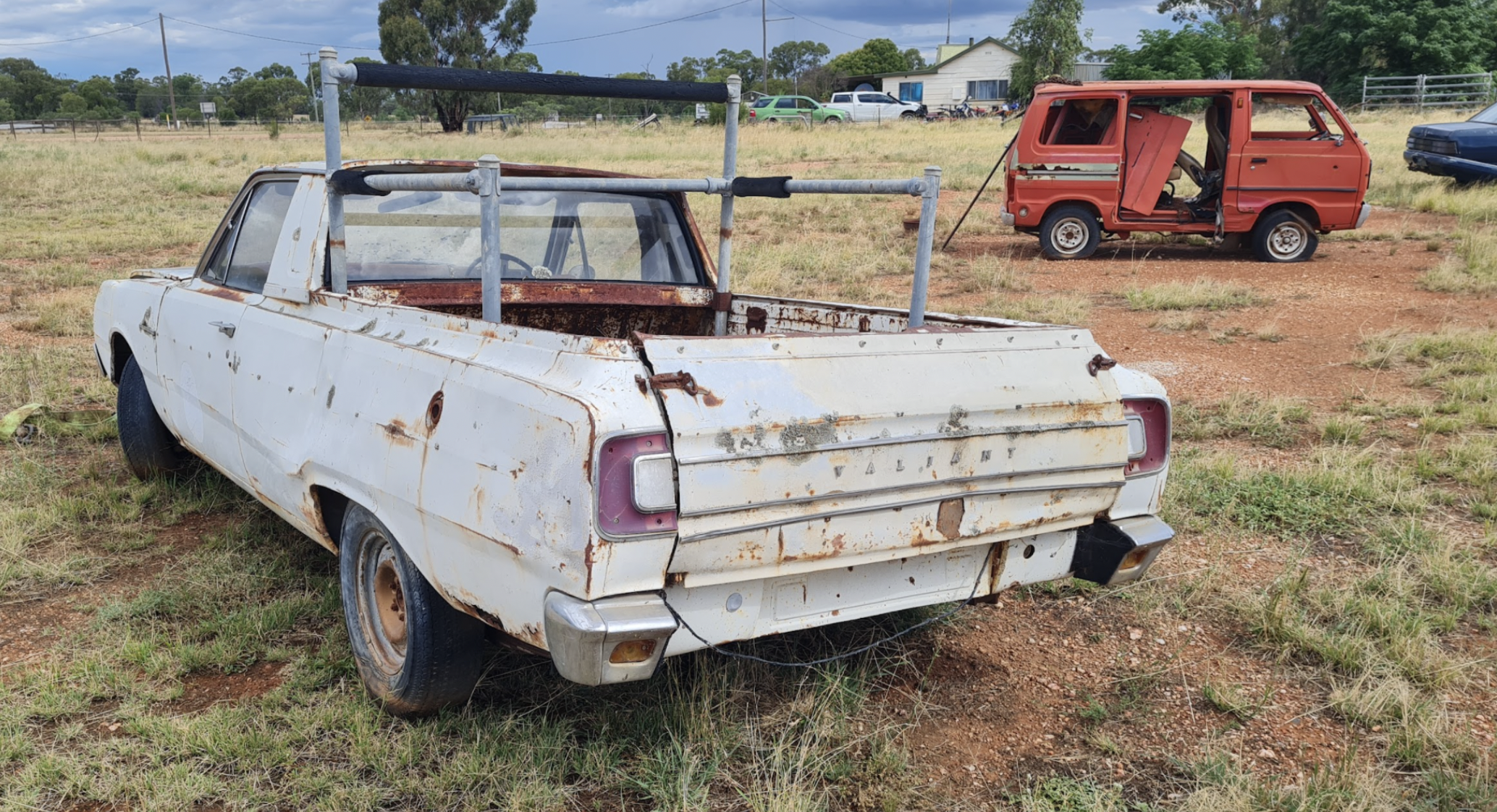 See those little rear bumperettes with integrated turn signals [Hi, it’s Jason Torchinsky here. I just thought I’d hop in since my Someone Is Discussing Turn Indicators implant started pulsating. You know what’s cool about those bumper-mounted amber indicators? They can also be reverse lamps! Yes, Australia and New Zealand were the only countries that allowed amber reverse lamps, primarily to accommodate U.S.-market cars brought over, where the clear reverse lamps could be repurposed to be amber indicators and back-up lights.]? Those allow the ute’s tailgate to fold not just flat, but also in the downward position so one can better reach stuff near the front of the bed. That’s right, Chrysler Australia had the MultiPro tailgate well before GMC did. Check it out: 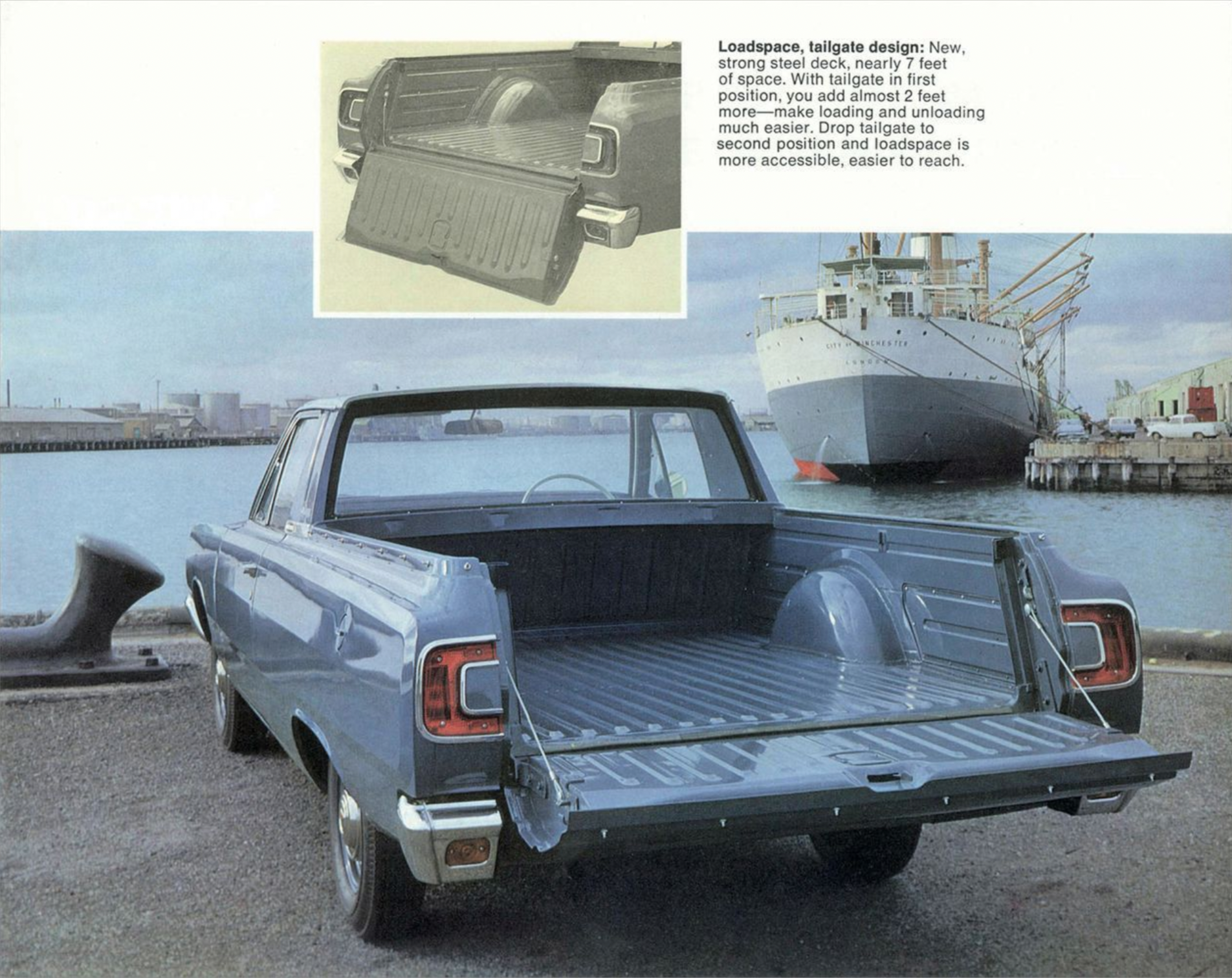 Even if you are a Mopar fan, you’d be forgiven for scratching your head in confusion right about now. Because this machine, and many old Australian Chrysler vehicles, was quite different from what Chrysler sold in the U.S. 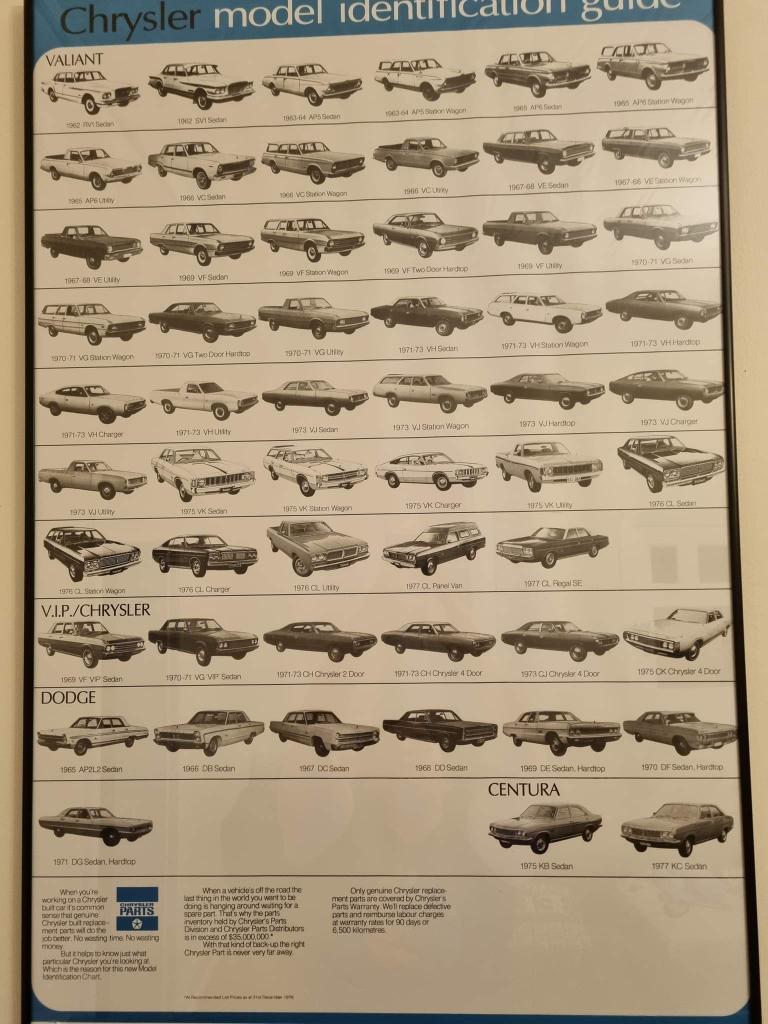 Laurence, who spends much of his time talking with farmers (who tend to own amazing old vehicles) as part of his job, broke it down for me, saying:

…Chrysler Australia…were always the smallest of the big three. They never had much money, and so did their best to disguise that the same platforms and parts were carried over for several years. We had Valiants from 1961 to 1981, the last two years were actually made by Mitsubishi under licence because Chrysler Australia was broke and sold the factory to them

Getting back to the misfit status of Valiants, they had a reputation as a car bought by immigrants, particularly Italians and Greeks of which we had thousands settle here in the 50s
They were often derided as ‘[derogatory term] Chariots’
Farmers liked Valiants though, as the Hemi six pulled like a V8 and Valiant utes were often much cheaper than their equivalent Holden or Ford

Now with classics sky-rocketing in price, quite ironically many of the die-hard Holden and Ford guys that used to give me shit for owning Valiants are now very interested in them and ask me lots of questions

Unlike many of today’s “global vehicles,” which are pretty much exactly the same regardless of the market in which they’re sold (with some differences in standard content and powertrains), Australian Chryslers were thoroughly different than Chryslers sold elsewhere. In fact, Chrysler Australia had its own engineering team that developed its own bodies and powertrains, using basic designs provided by Chrysler engineers in the U.S. as the basis.

Take the “VF” Chrysler Valiant Wayfarer ute that I now own (woh that feels weird to say). As you can see in the little orange box in the brochure below, there’s a little storage area behind the bench, below the front part of the bed. This is actually just a byproduct of using the American Plymouth Valiant wagon platform as the ute’s starting point. That storage area is shaped exactly like the wagon’s rear footwell. 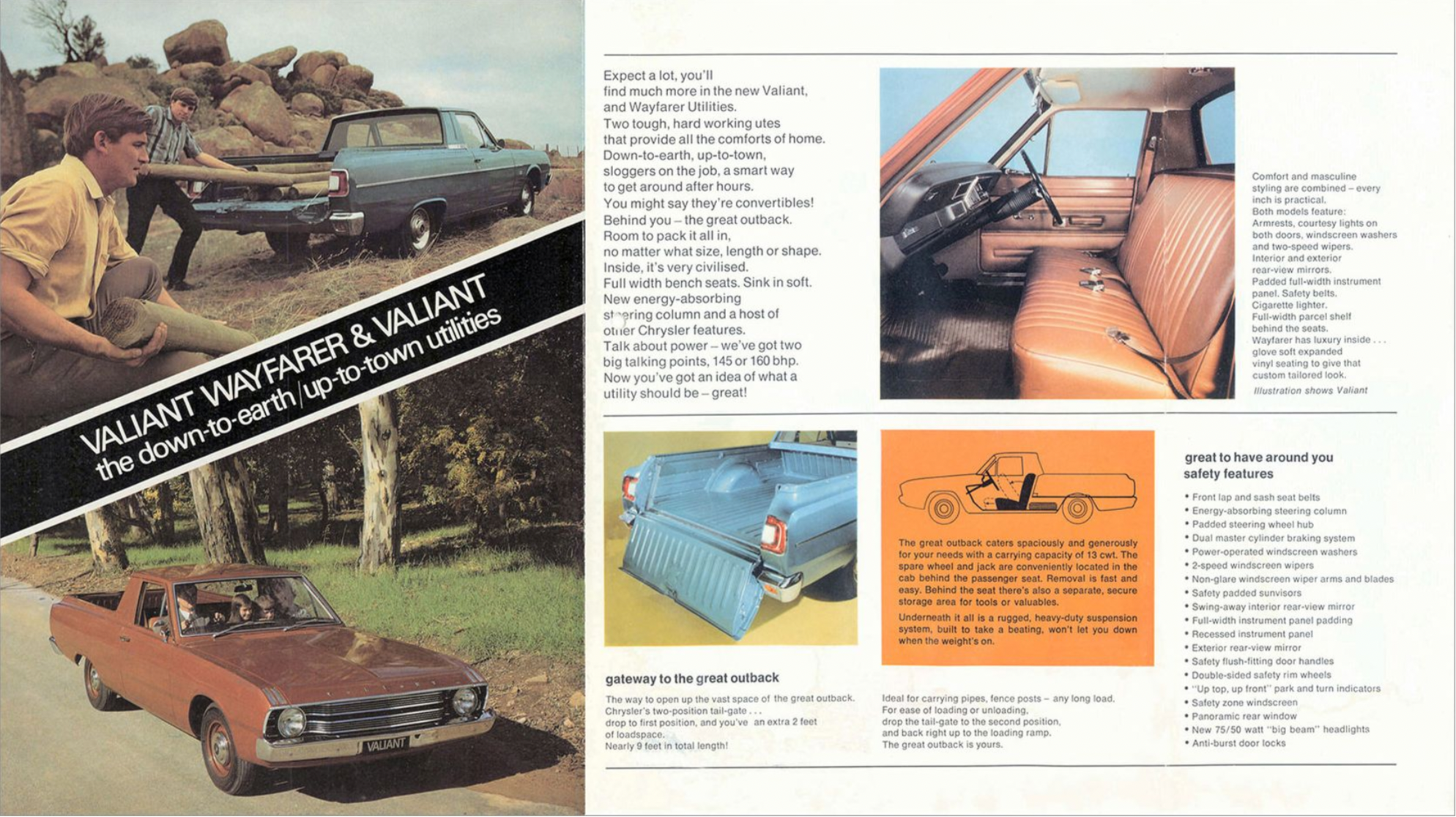 Chrysler Australia vehicles — which absurdly mishmashed American nameplates to bring the world vehicles like the “Chrysler by Chrysler” and “Chrysler Valiant Charger” — had styling that might look familiar, but it’s not quite same as what Americans are used to. That’s because Australian Chryslers’ sheetmetal and bumpers were often a blend of parts from various U.S. Chrysler model-years, and grilles and lighting was sometimes totally unique for the Australian market.

More fascinating than styling differences and vehicle platform adaptation, though, is the existence of the Hemi-Six. My 1965 Plymouth Valiant, and every Valiant offered in the U.S. through the 1970s, came standard with the Leaning Tower of Power — arguably the most reliable engine of all time, the slant six. The heaping pile of crap 1969 ute that I now own (still feels weird) also came equipped with the unkillable motor. But in 1970, the base motor became the Hemi-Six, an Australia-designed straight six that allegedly has its roots in an old U.S. Chrysler design that never was. As rumor has it, Chrysler sent blueprints over to its Australian division, the Ozzies actually finished up the development process, and started building the iron-block 215s, 245s, and 265s for Valiants and Chargers and more until the early 1980s. It’s become a legendary engine in Australia, right up there with Ford’s hallowed “Barra” straight six, which could be modified to handle immense power. 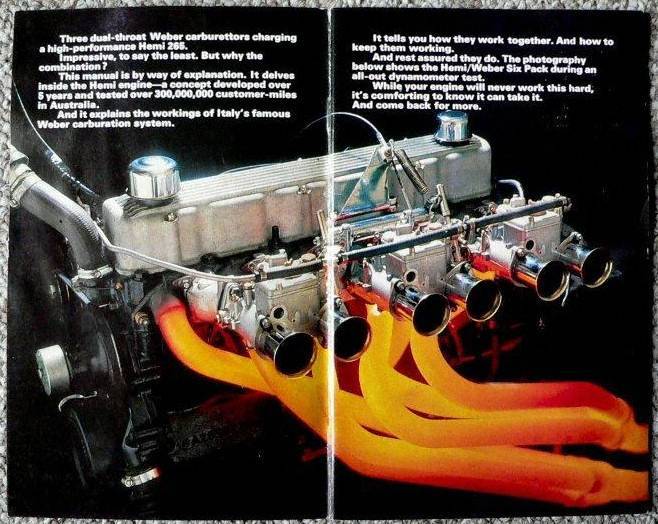 Needless to say, I will be removing the slant six from my rustbucket and chucking in a Hemi-Six and three-speed column-shift manual Laurence has sitting around (apparently the motors and transmissions are as ubiquitous as Kangaroos).

The engine swap should be easy, as the underhood packaging is the same between slant six and straight six Valiants, but I just had a chat with Laurence the other day, and the farm insurance agent just had to point out this white ball by my motor: 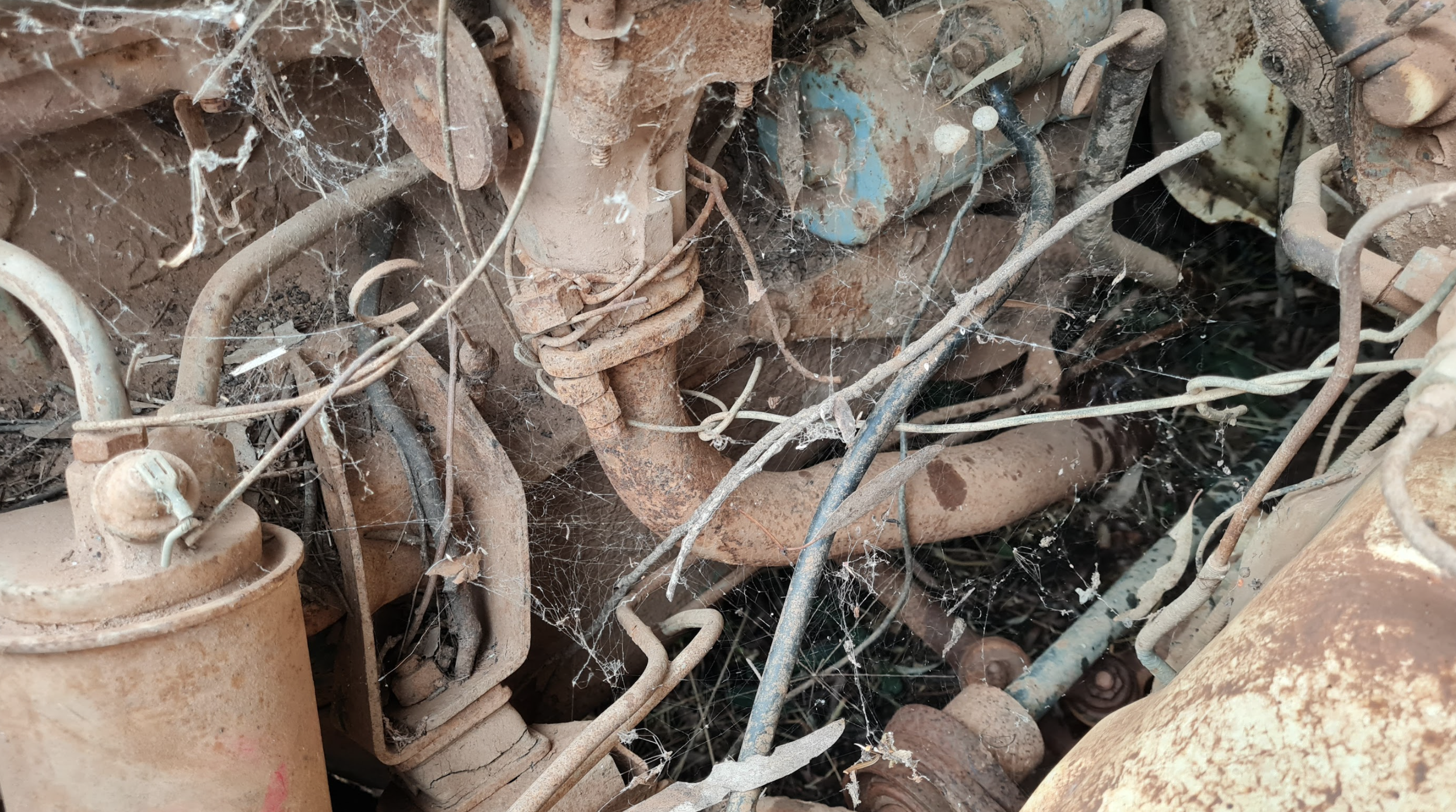 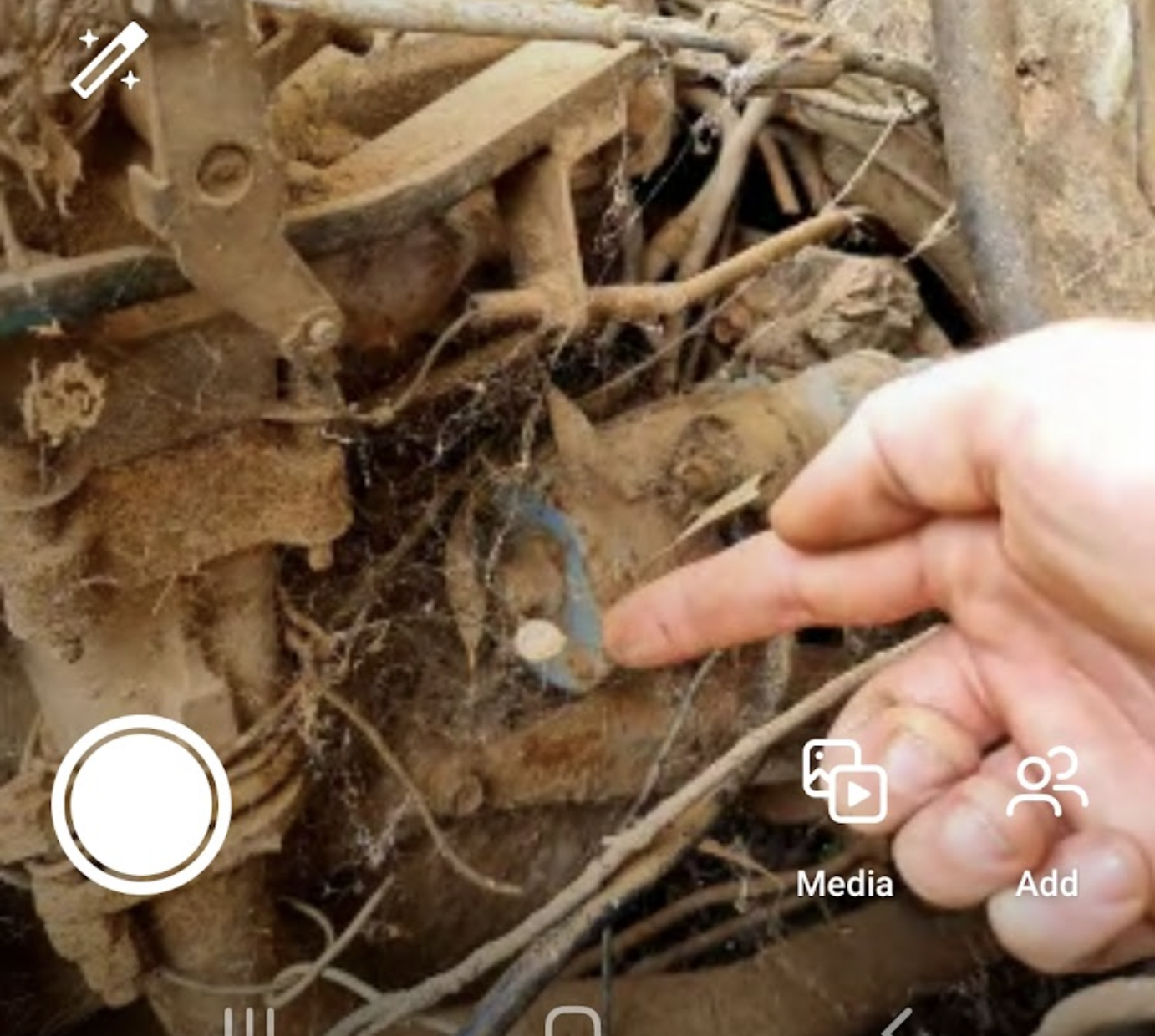 It’s an egg sack from a Redback spider, which Laurence says is “not generally deadly.” Between that comment and the beer-can reference to his house-Huntsman (both made with a smirk on his face), I’m beginning to wonder if the man is messing with me, or if I’m about to be rid of my arachnophobia through exposure therapy. 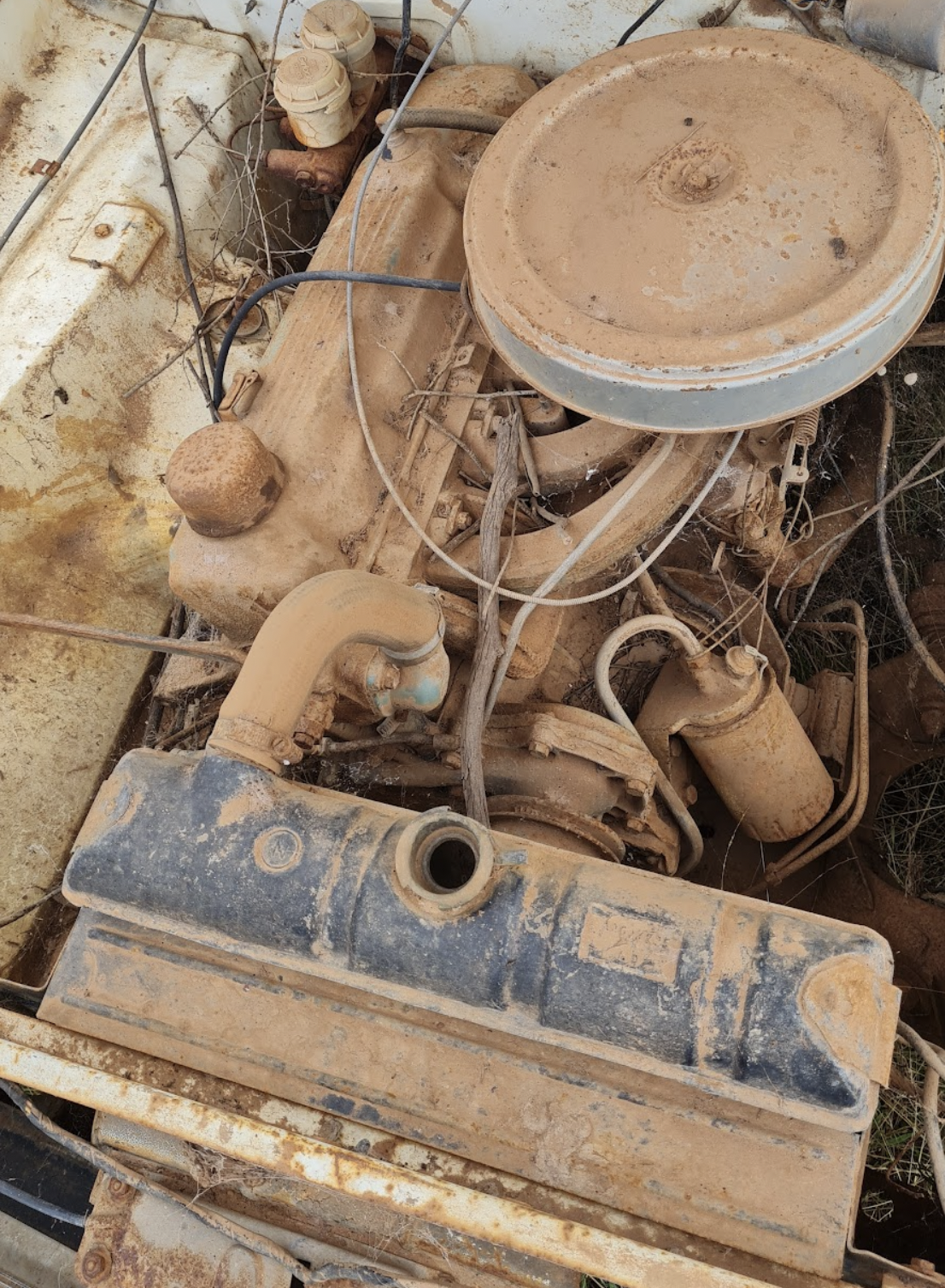 Anyway, let’s have a look at what I’m in for. The slant six appears to be in good shape, and I bet it runs just fine, but I must have the Hemi-Six, so I’m selling this to one of Laurence’s friends to offset the Hemi cost. 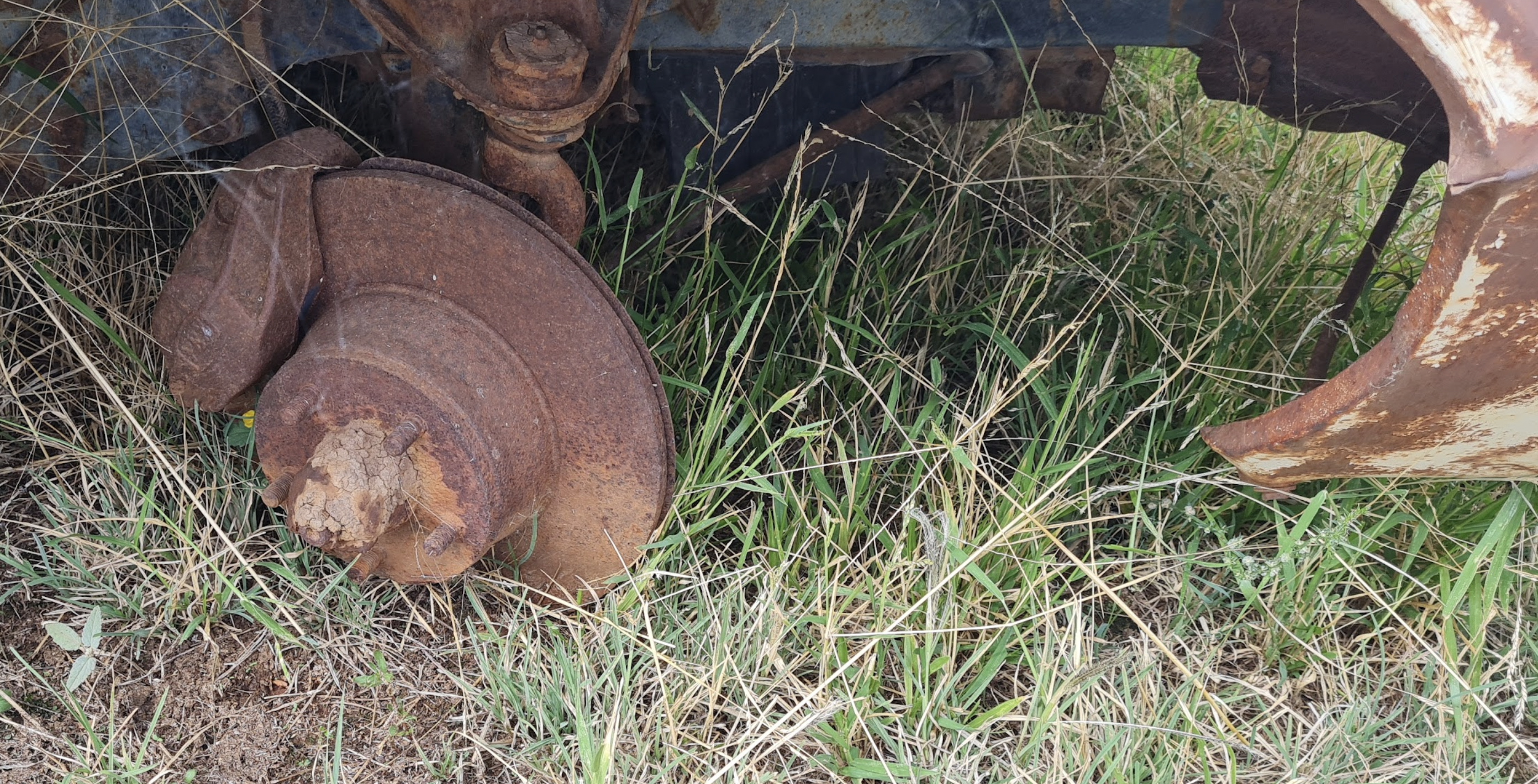 As for the rest of the vehicle — well, it’s rough. [Jason here again–look how cool the front turn signals are, integrated into the body as those two rectangles over the headlamps.] As a general rule, if you buy a vehicle with only three wheels, it’s almost certainly a massive pile of crap; it means someone yanked a wheel and thought the vehicle was so far gone, it wasn’t worth the immeasurably low effort needed to bolt the thing back up. 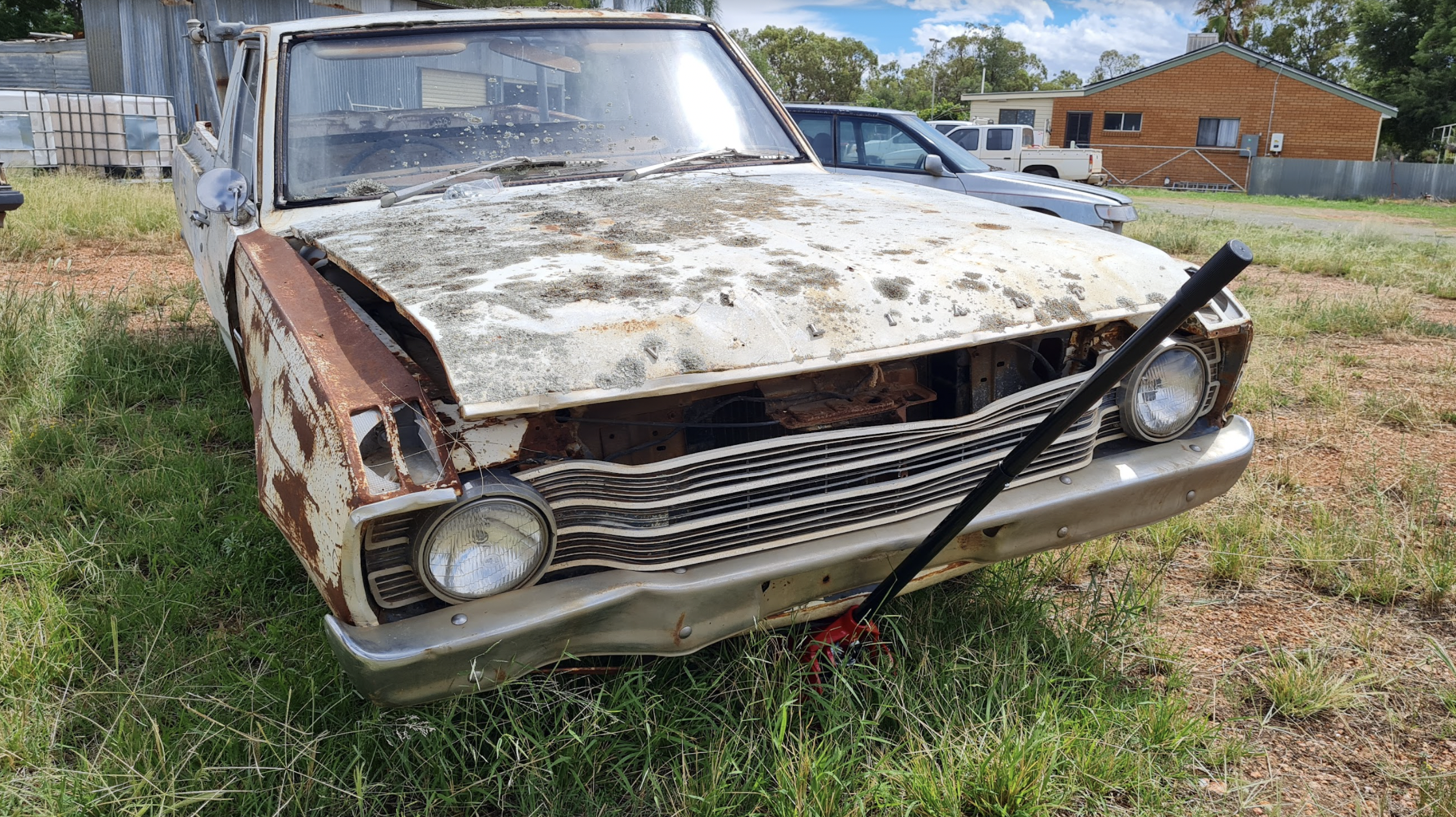 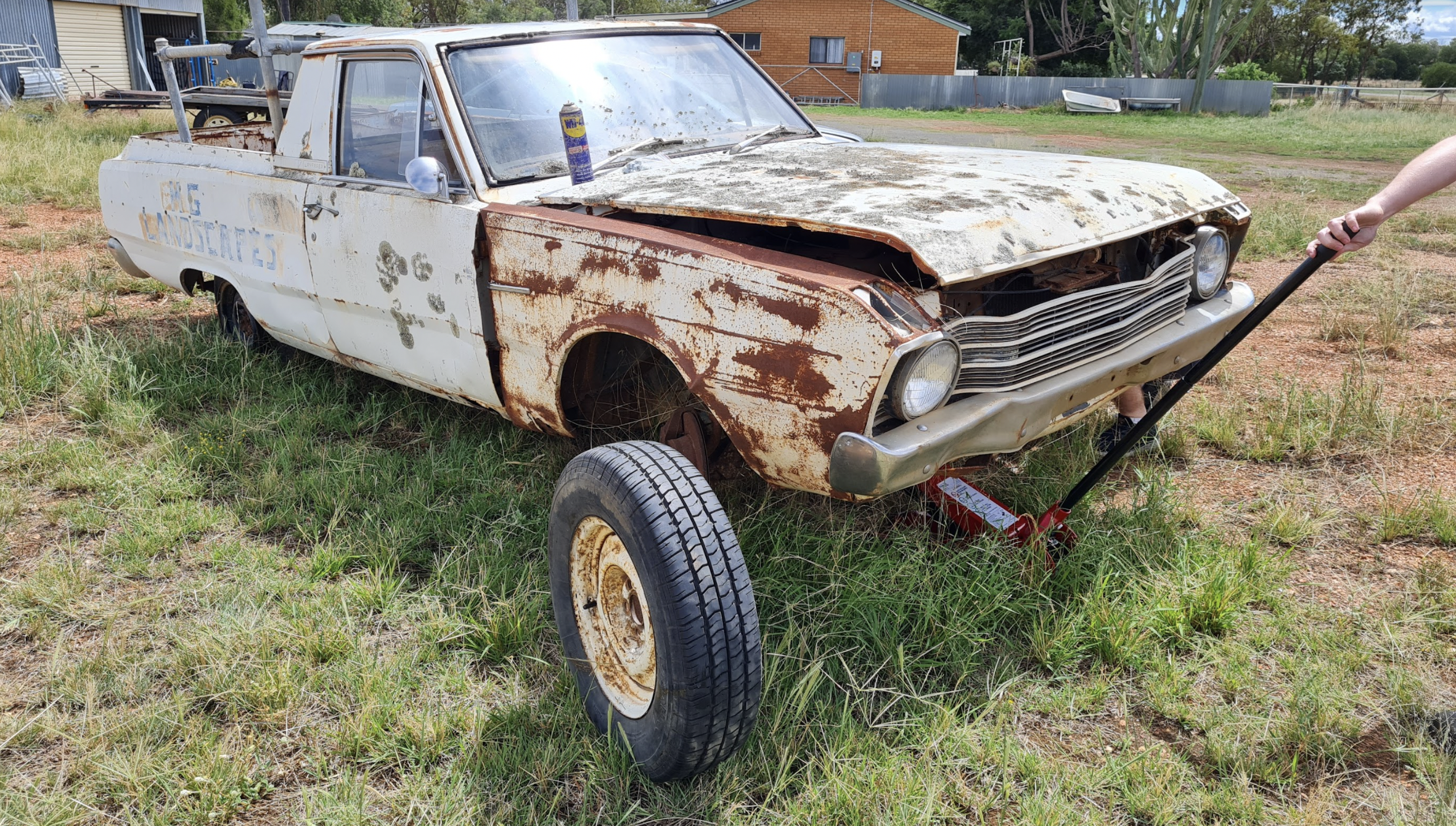 Laurence went out to a local woodcutter who had bought the ute from a nearby farm, and jacked up the machine he had bought for a random American journalist halfway across the world; then he threw some rubber onto that front right corner. But that didn’t exactly help the ute roll, as the brake in that corner — along with the rear brakes — was locked up.

As shown above, the Mopar fan and his buddies had to resort to some drastic measures to get the ute onto a trailer, with the result being that the ‘roo hunting bars in the back took a bit of a beating. 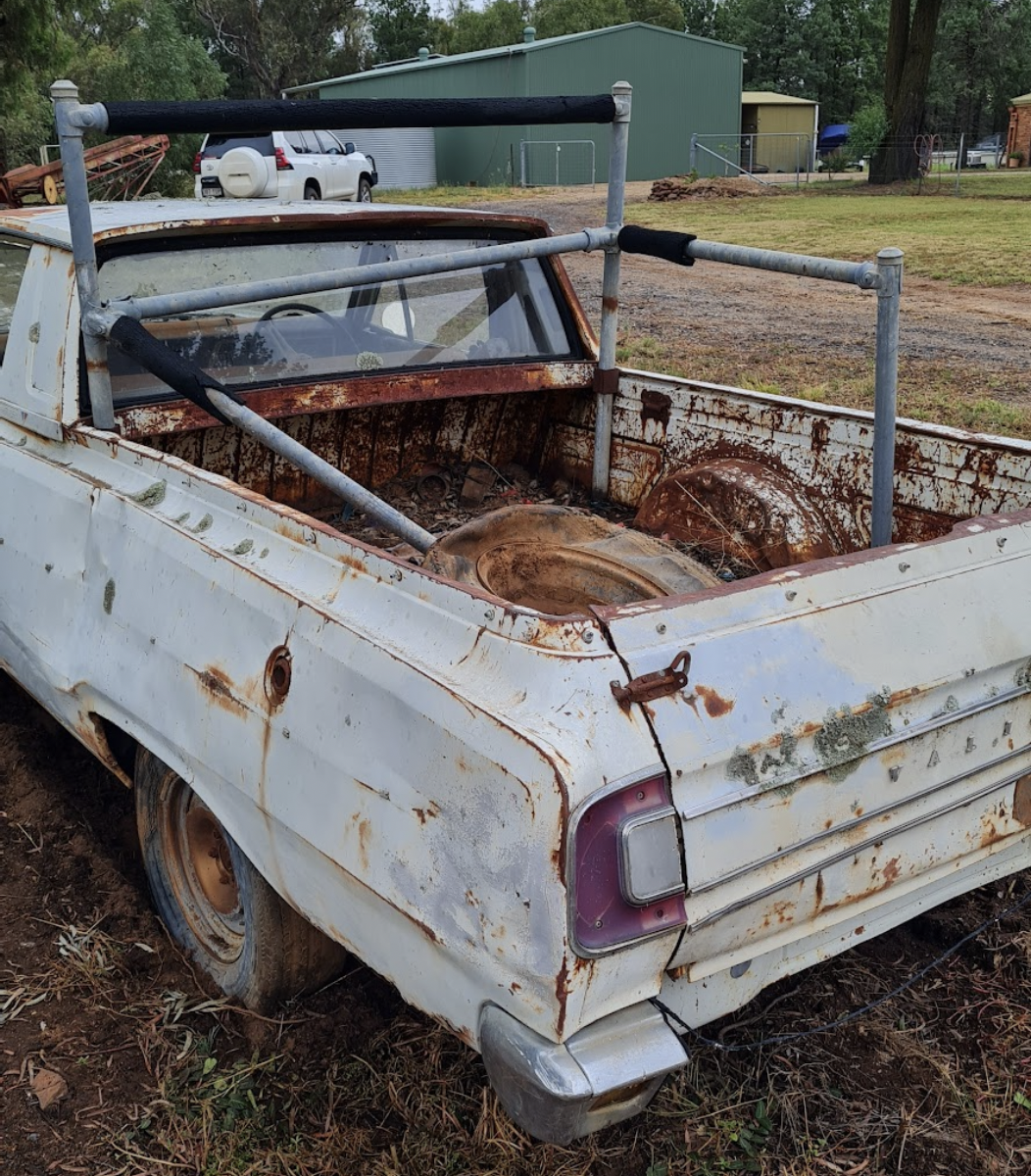 While we’re talking about the ’roo bars in the bed, it’s worth mentioning that there are some rust issues with the shotgun shell-covered bed floor: 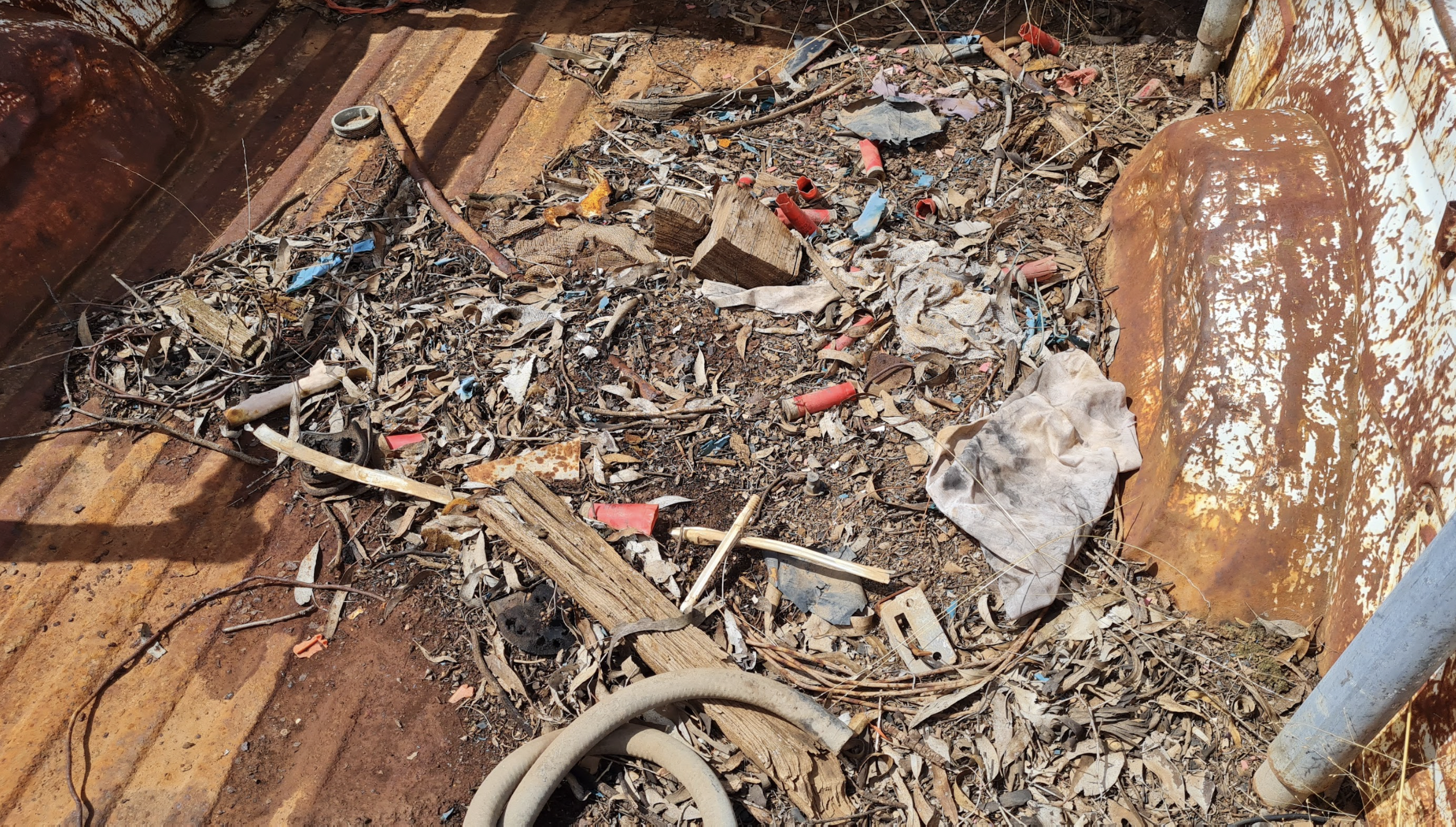 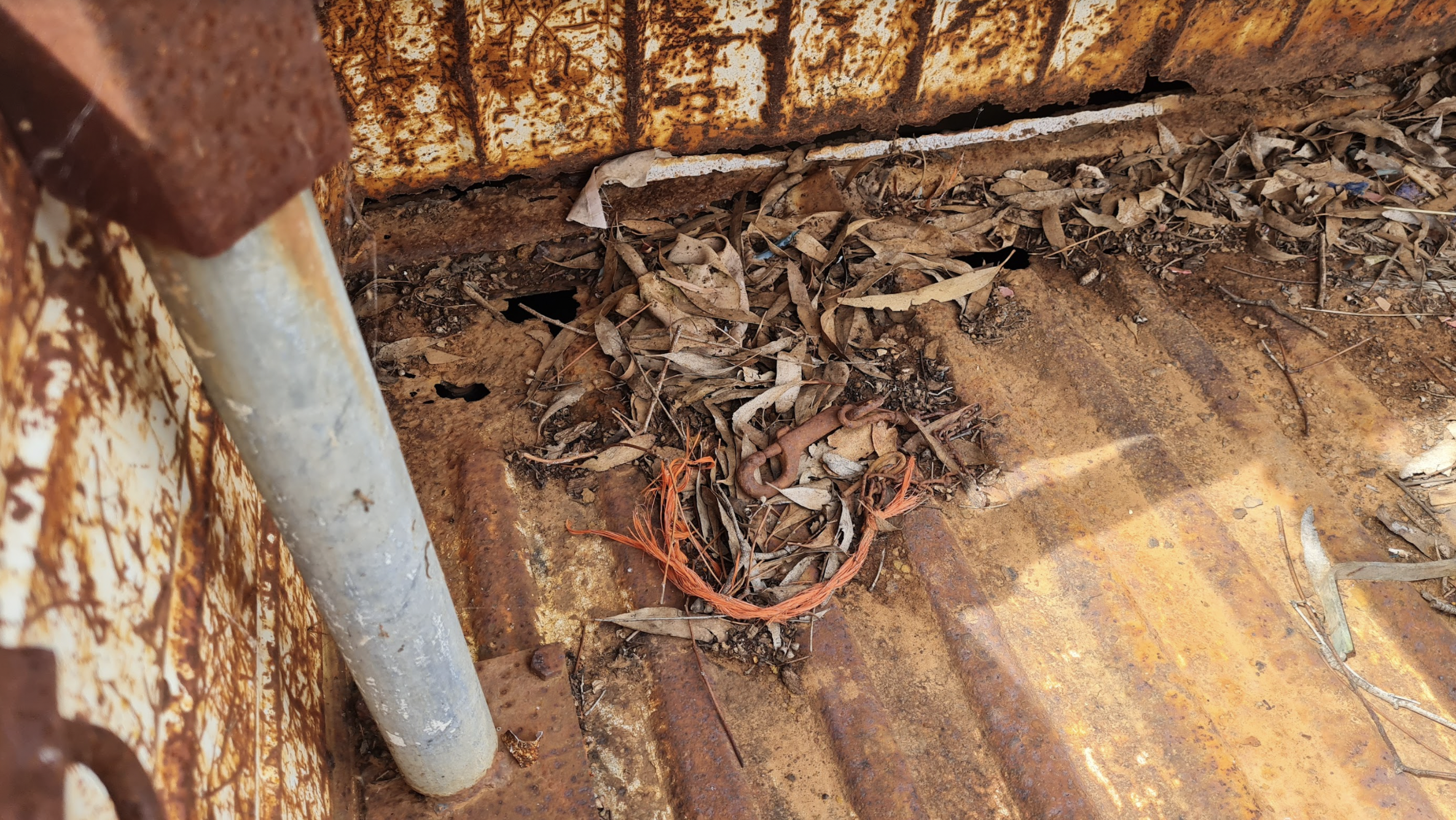 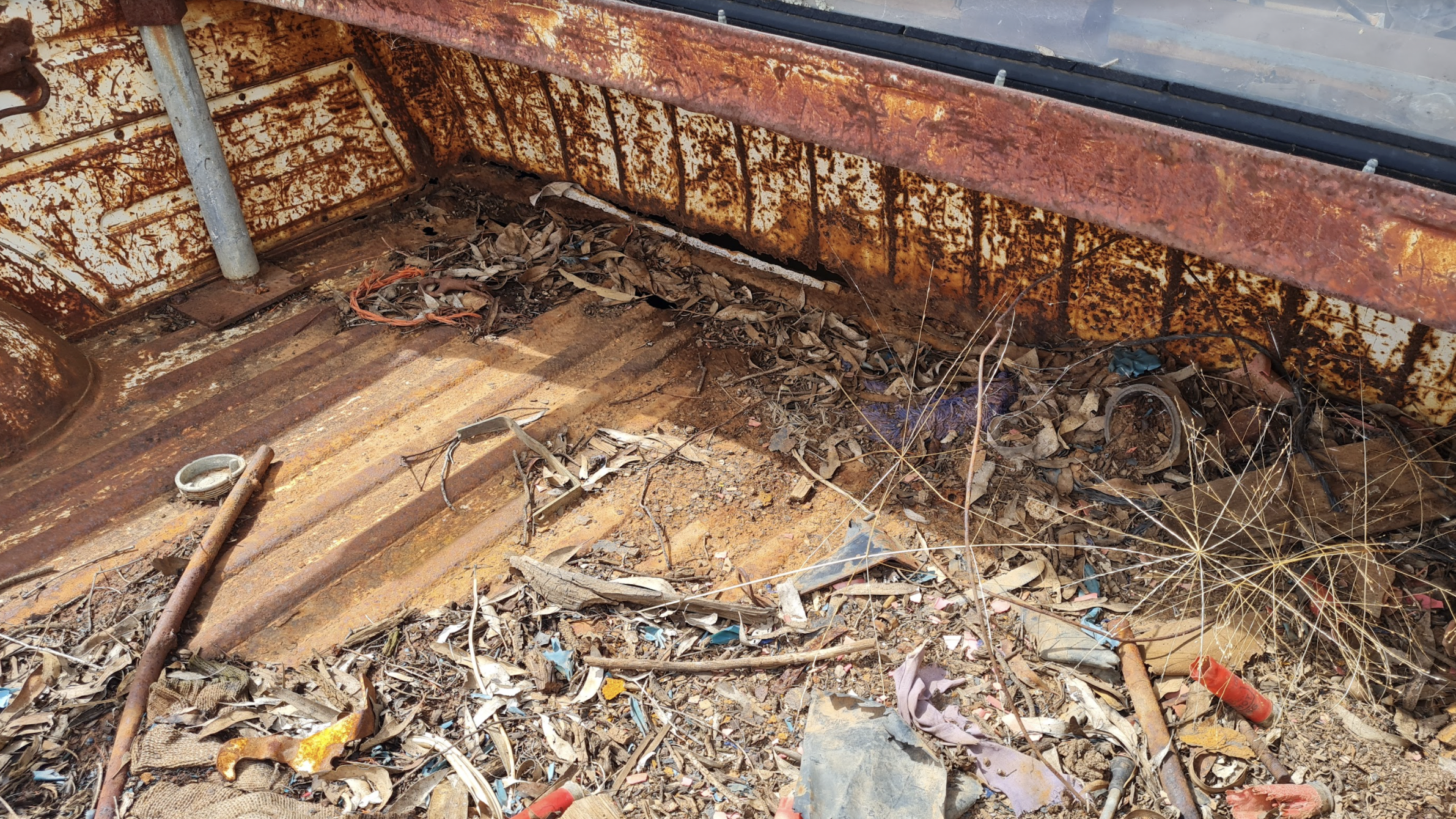 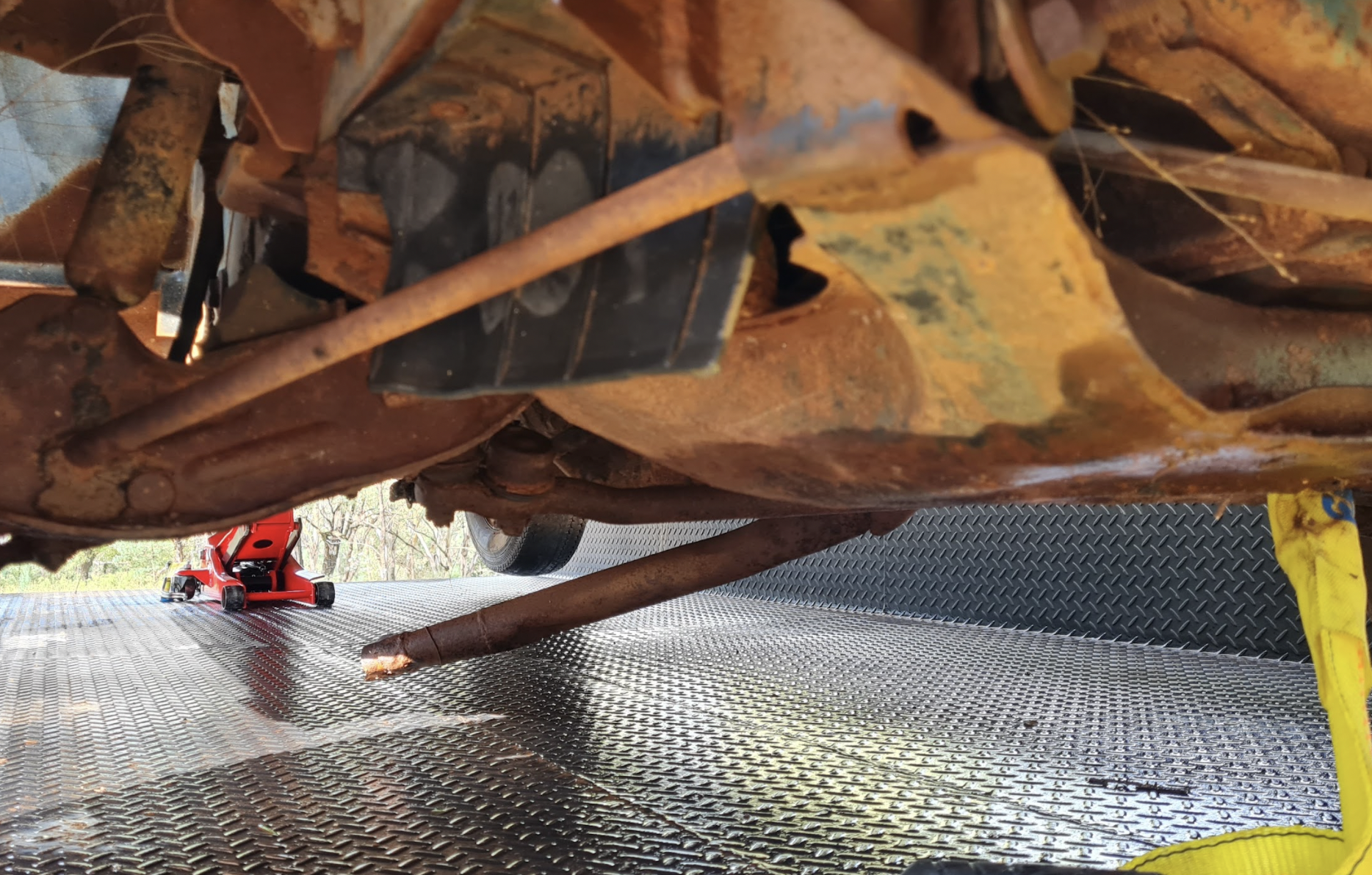 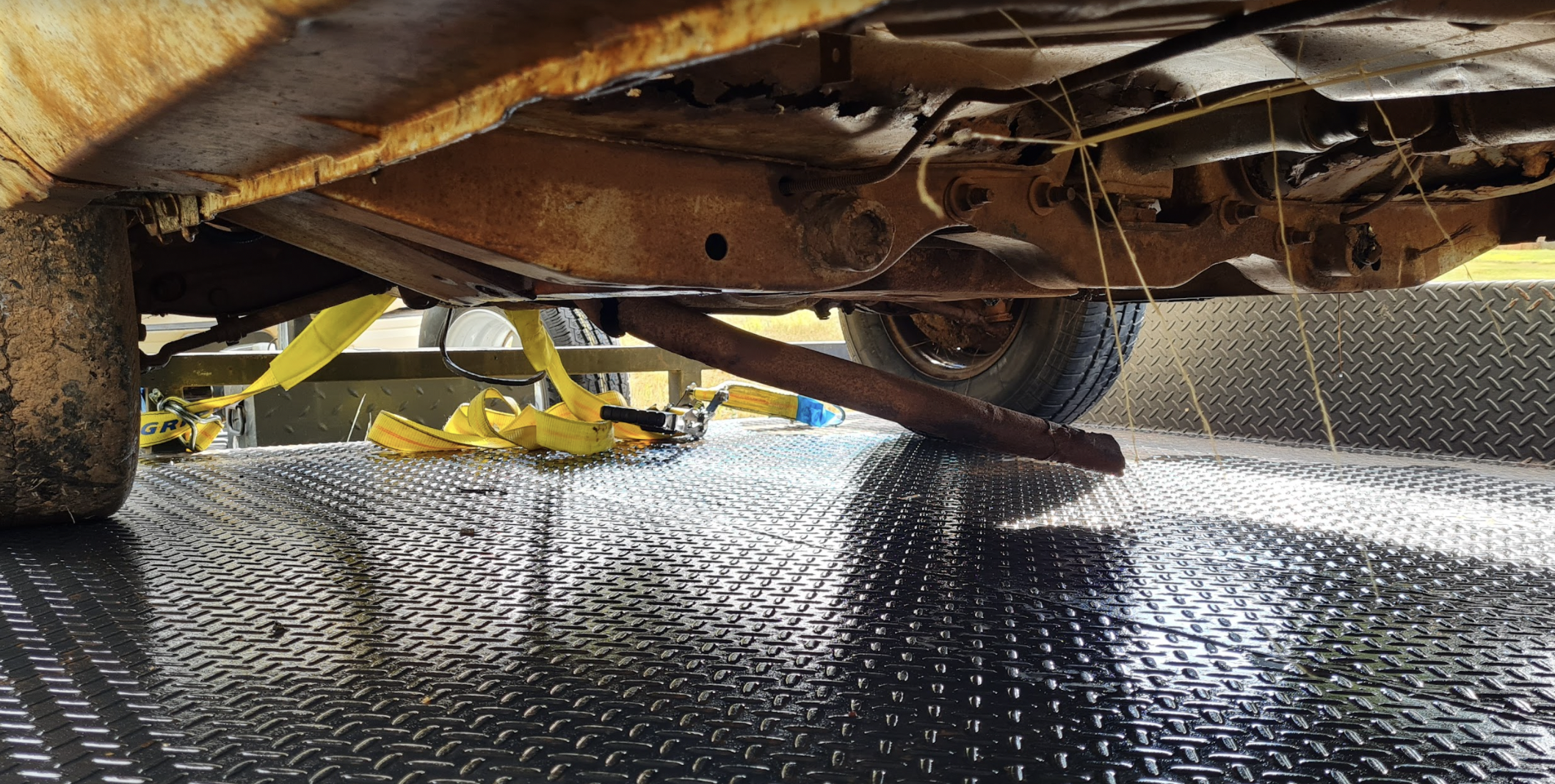 And the front right frame rail is a bit tweaked from an apparent impact: 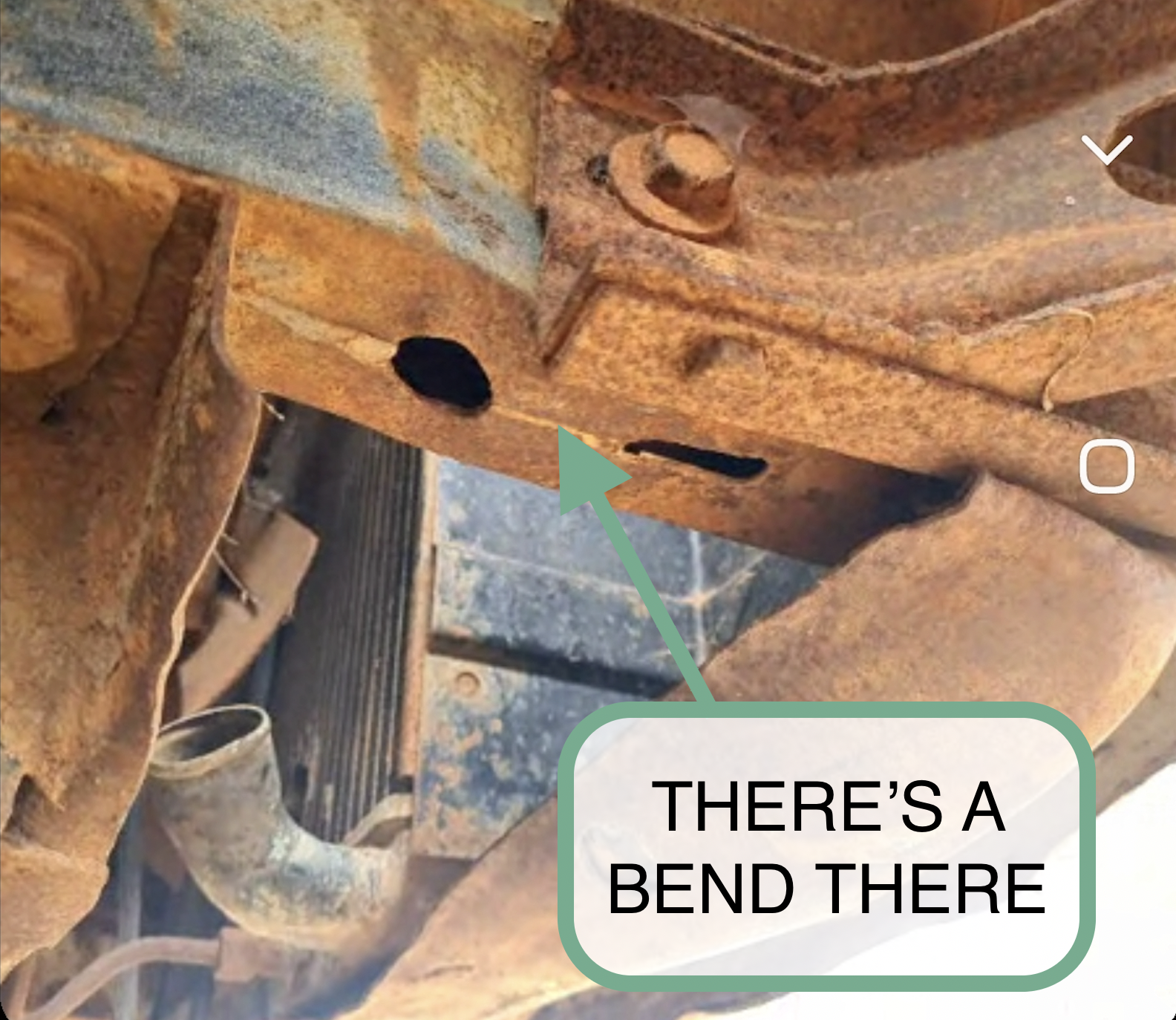 But overall, the body looks mostly rust-free. Check out the underside: 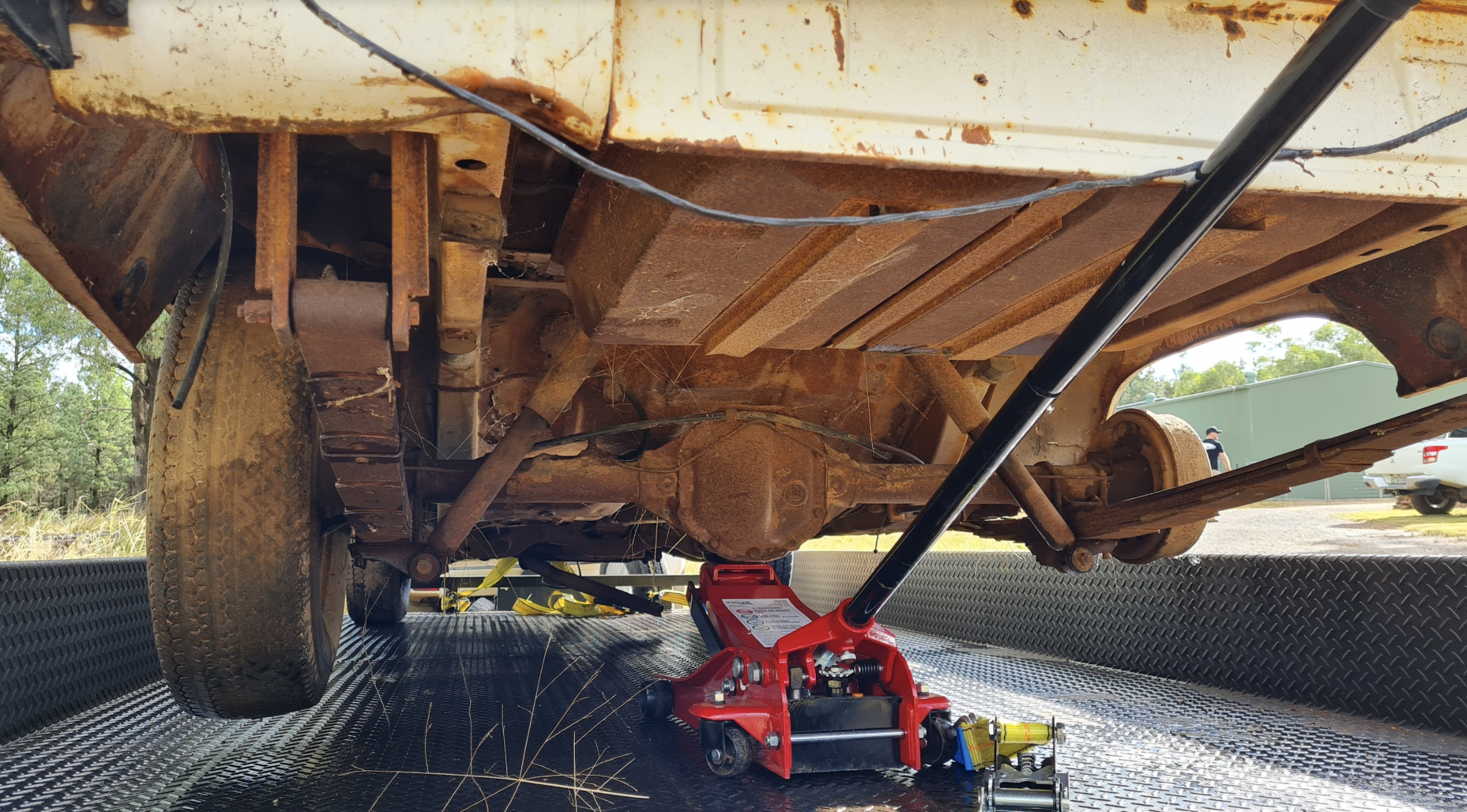 The rear left quarter panel is rusted out, sure, but the main unibody rails look solid: 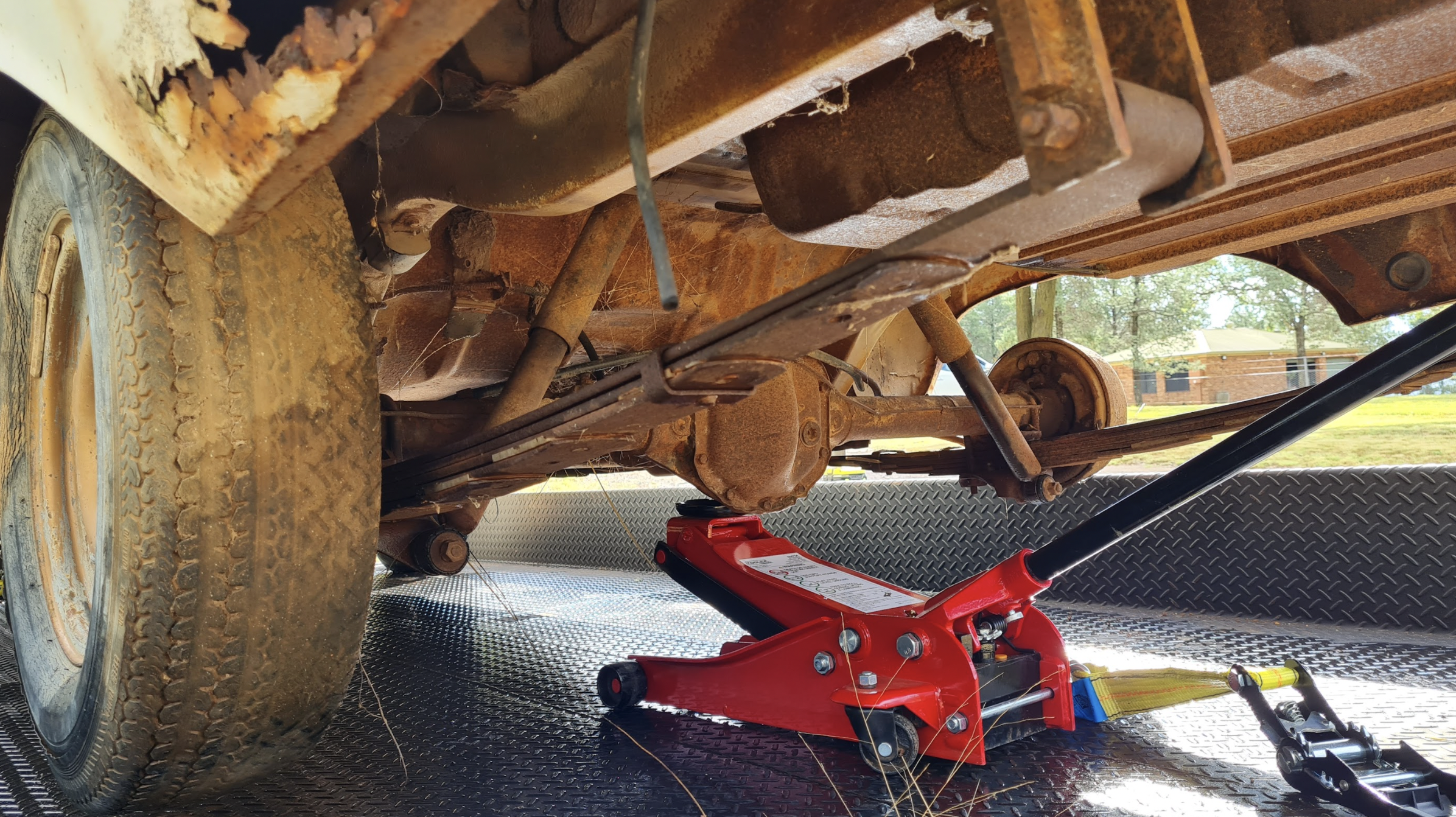 And the interior isn’t too bad, either. Sure, the dash is cracked, and the seat is a bit rough on the driver’s side, but the former doesn’t matter, and a seat cover will clean the latter right up. 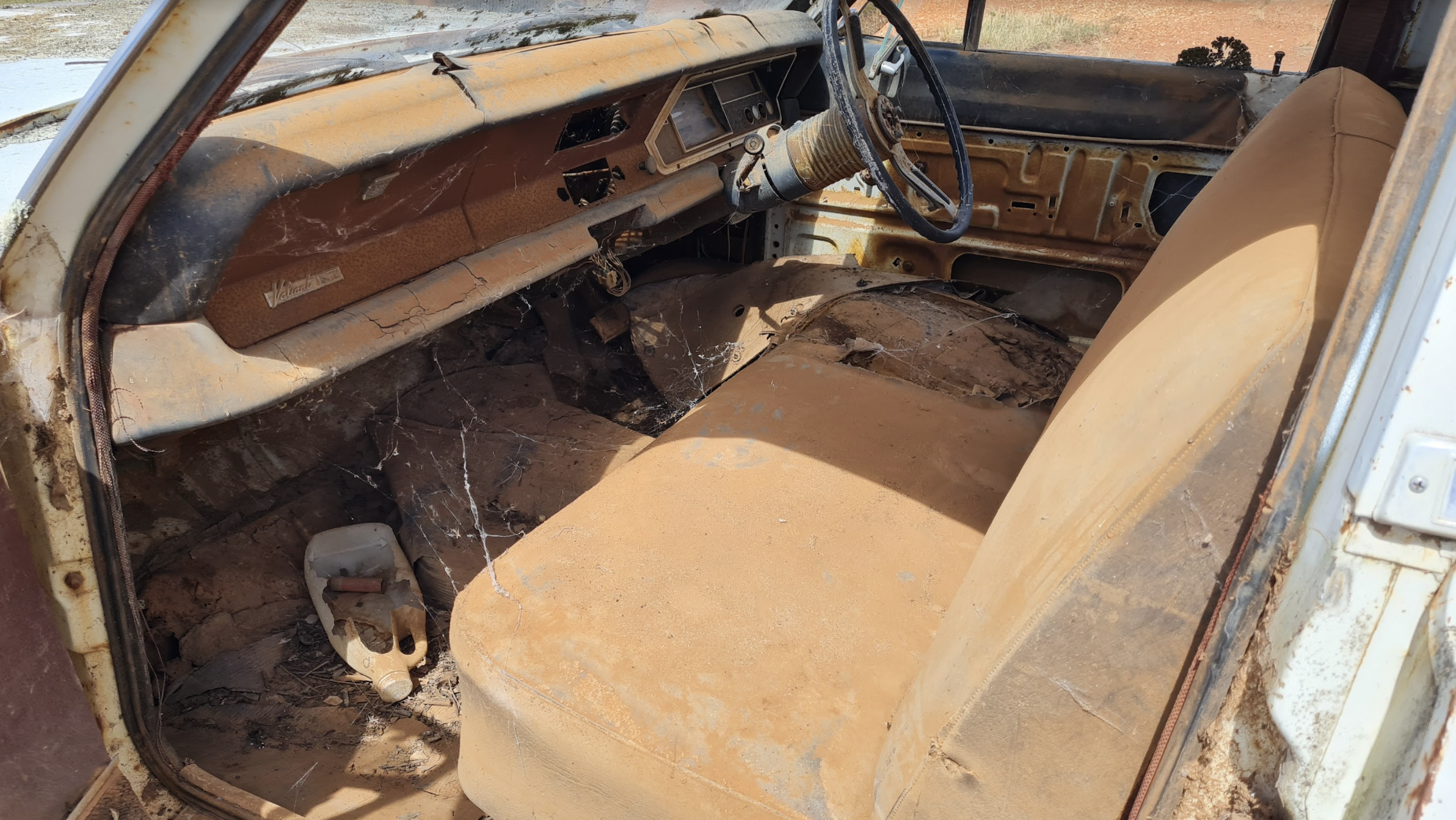 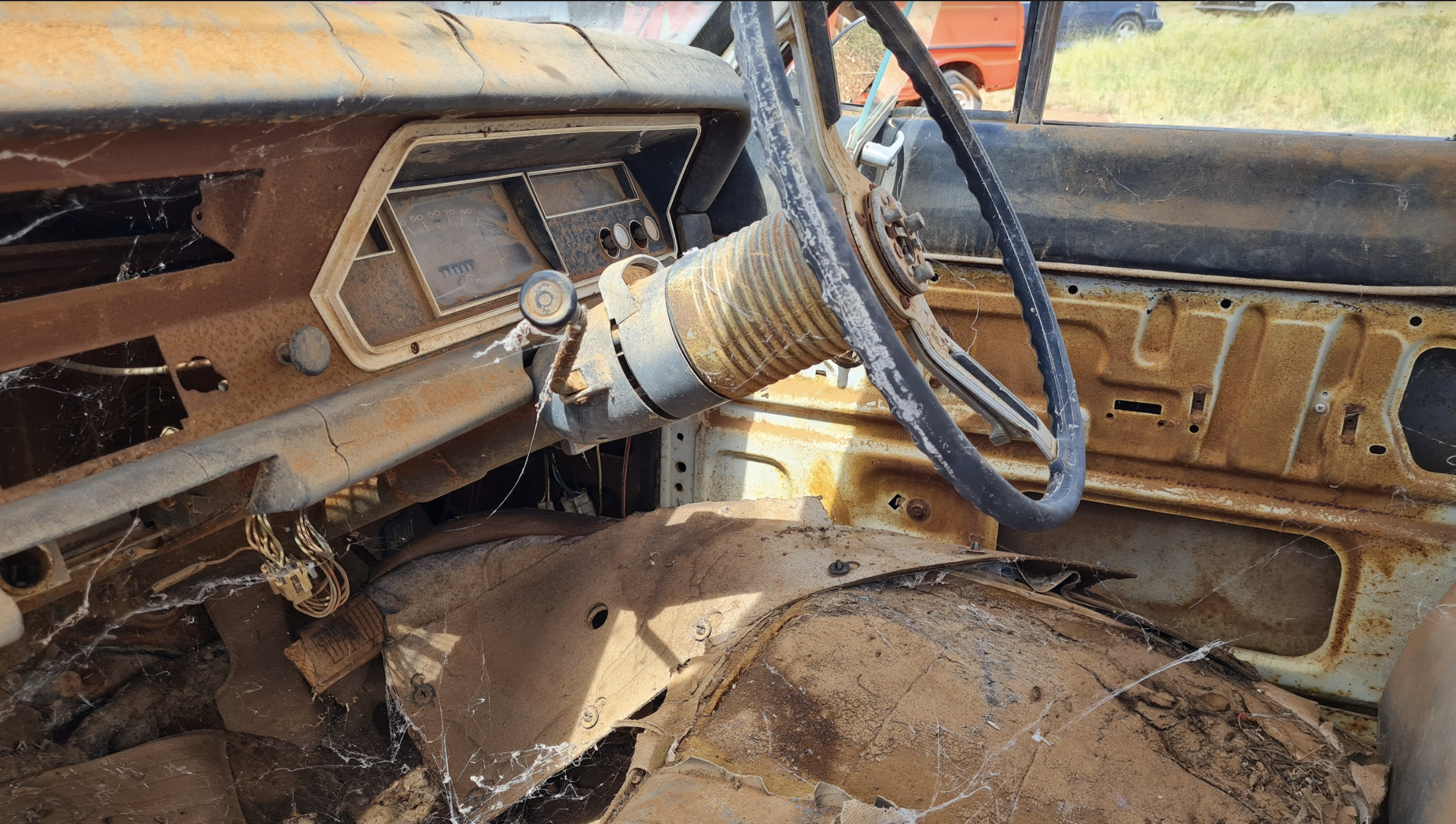 The floor does look a bit perforated there under the disintegrated milk jug with a shotgun shell in it: 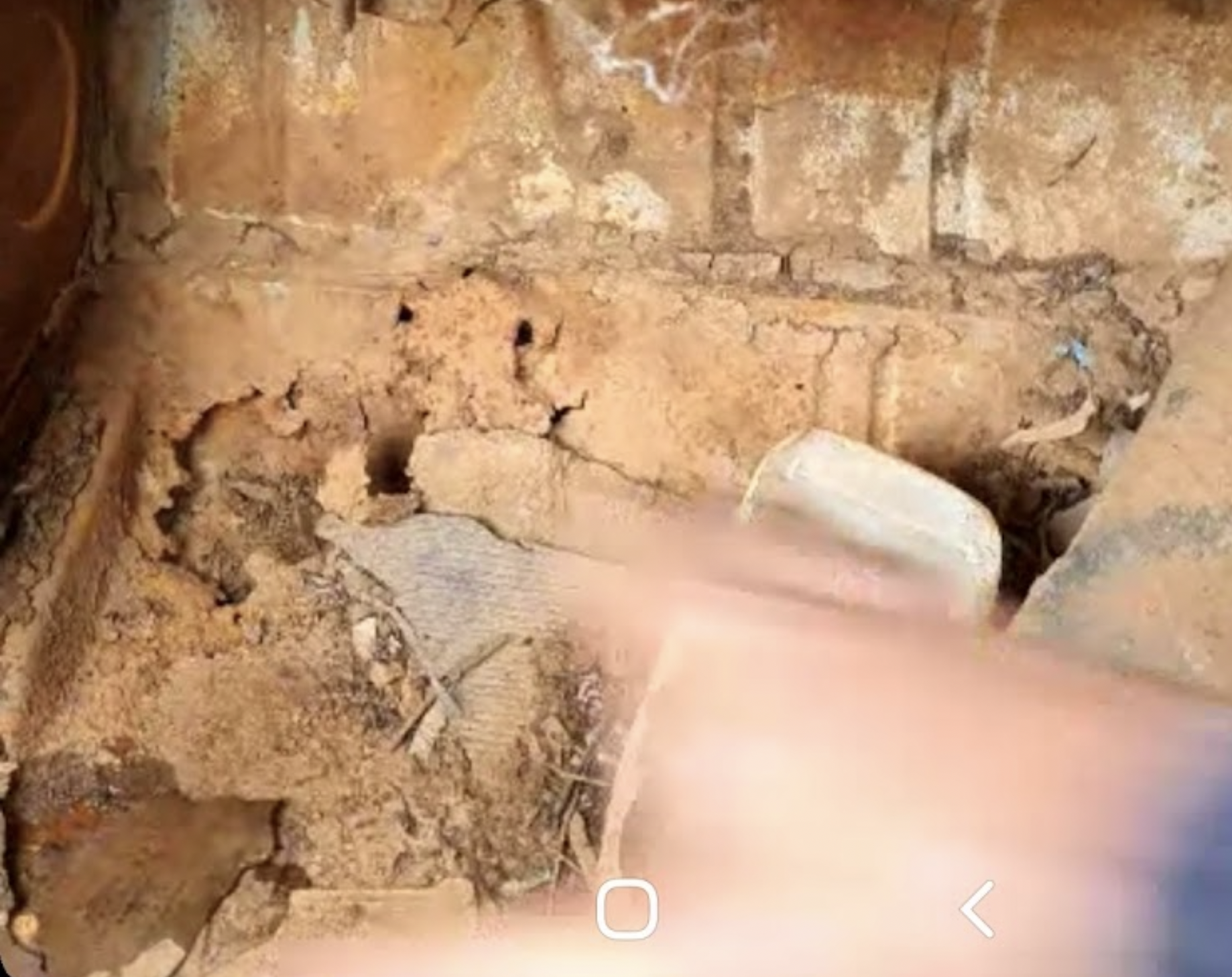 Laurence ratchet-strapped the Ute’s hood shut (I’ll have to figure out what the deal is with that, too) and towed the vaguely vehicle-shaped carcass from Tottenham (a city in New South Wales with roughly 300 inhabitants) to his place near Dubbo (which has nearly 40,000 residents). 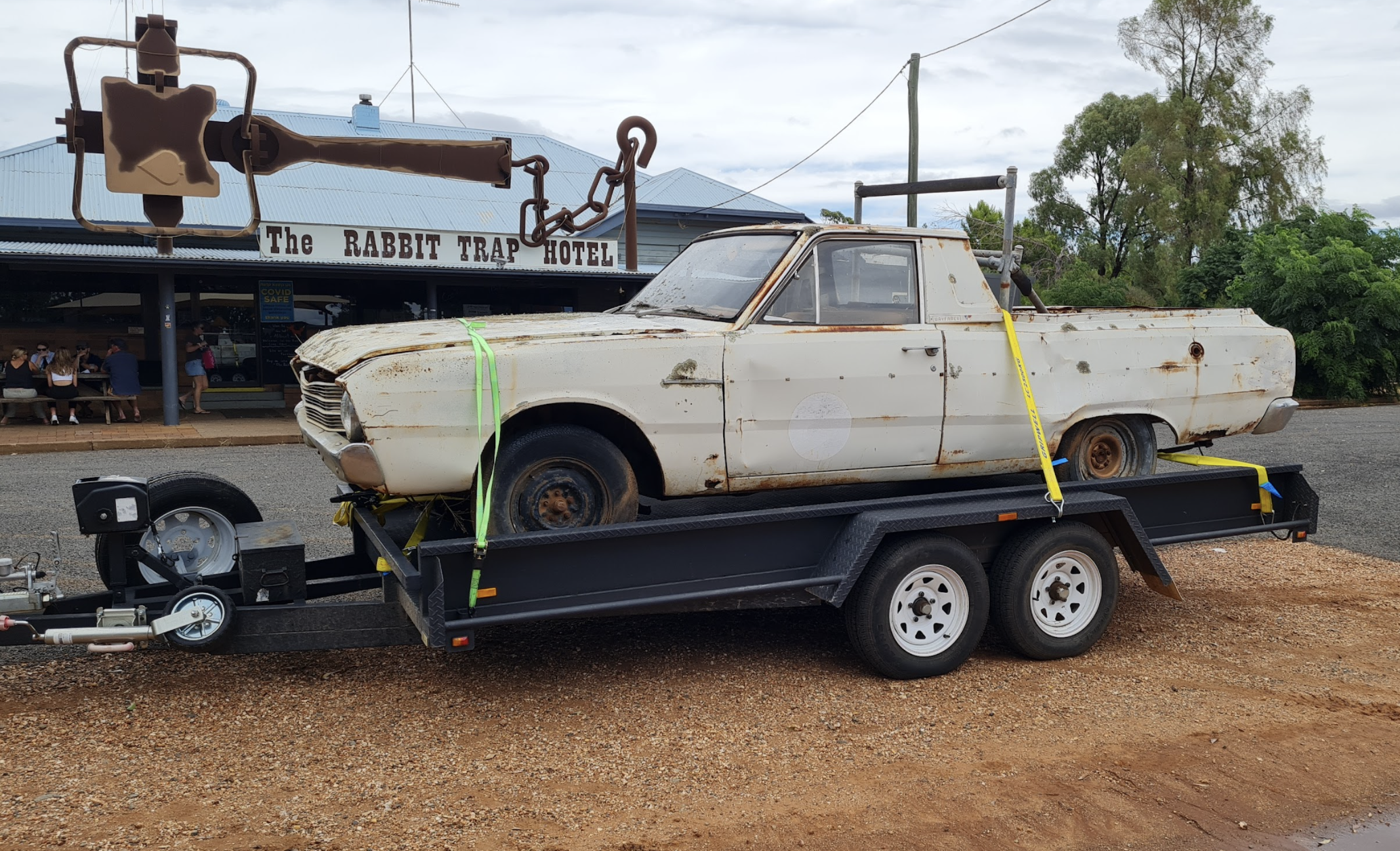 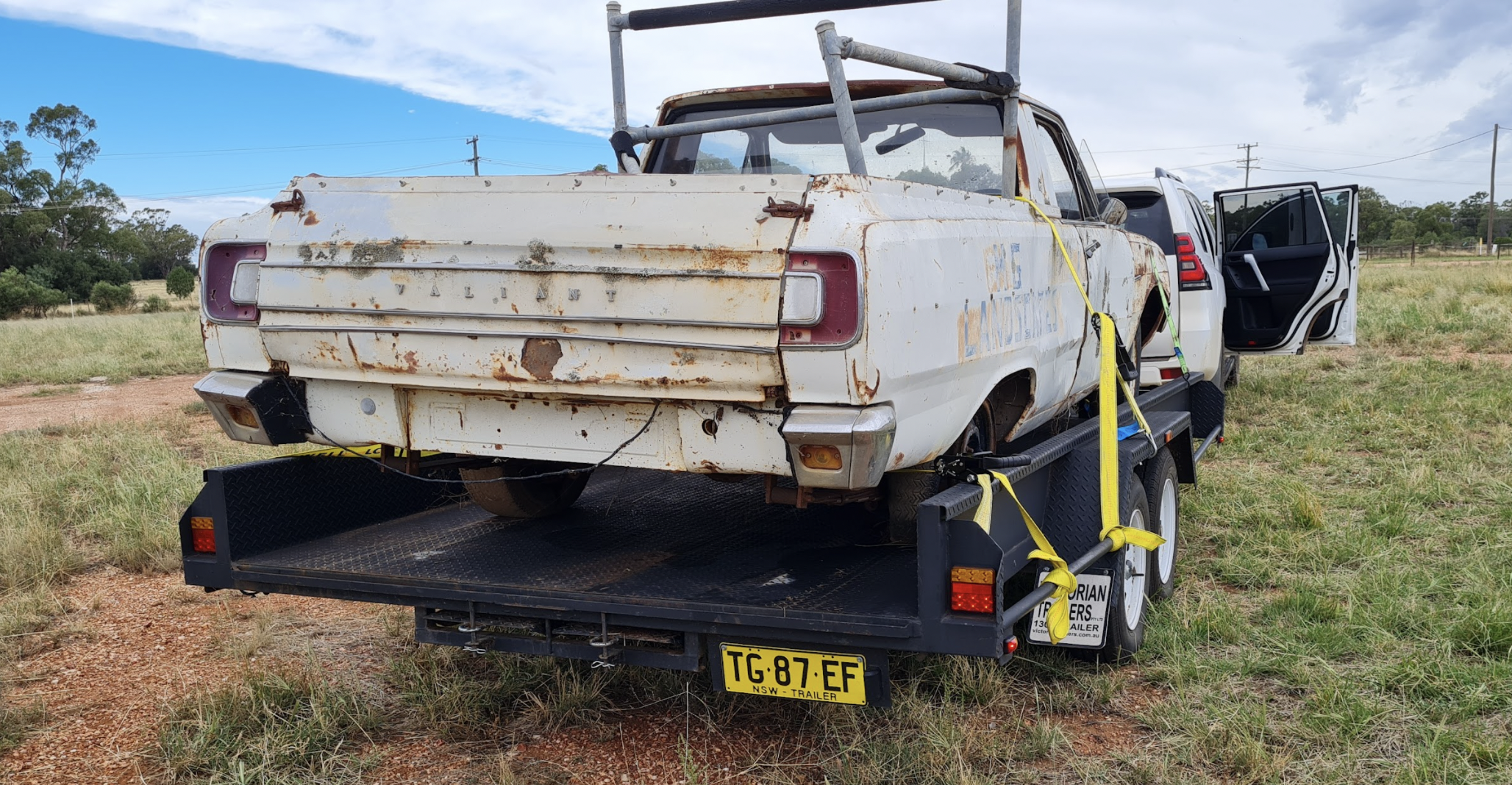 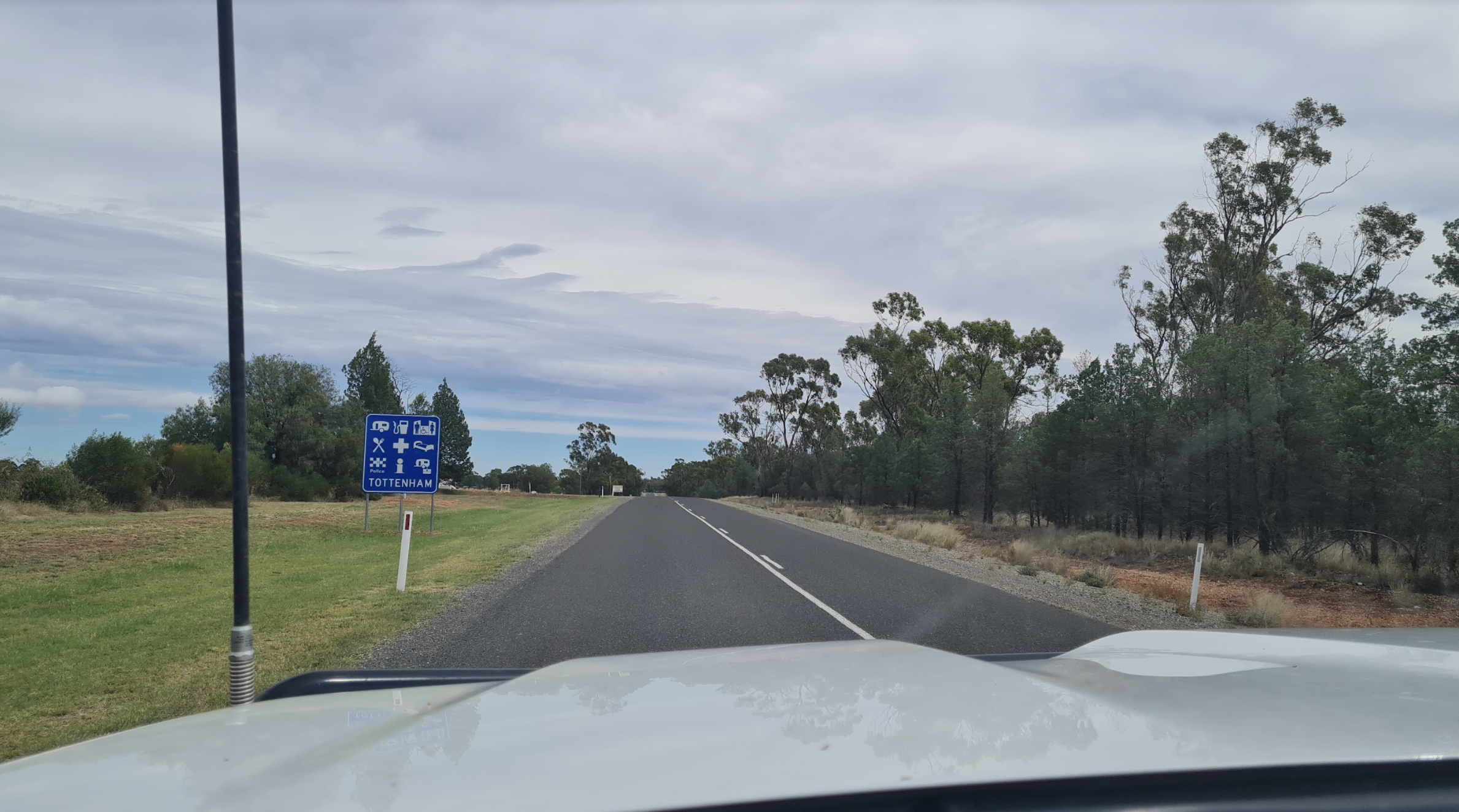 I’ll be lugging my tools onto an airplane and flying there this September. My plan? I don’t really have one, other than: Wrench my heart out and pray I can get the ute into good enough shape for an epic road-trip through the Australian outback, where I plan to learn as much as I can about car culture in the region, with regular dispatches making their way onto The Autopian for your enjoyment.

Unlike all my other hopeless wrenching projects through the years, the vehicle itself — which I’m naming Project Roo until I can think of something more clever — is, despite its horrible condition, somehow not the most likely thing to kill me this time around. And that’s a bit alarming.

Rust-loving Jeep man, cofounder and EIC of The Autopian, Jason's friend. Email: david@autopian.com
Read All My Posts »
PrevPreviousHow I Got My Navy Callsign By Shitting Myself In An F/A-18 Fighter Jet. Twice.
NextCold Start: It BeginsNext