Facebook-f Twitter Instagram Rss
Menu
Menu
Home » I Now Own A Parts Car In Australia: I Have Officially Peaked As A Human Being

I Now Own A Parts Car In Australia: I Have Officially Peaked As A Human Being

September is approaching, meaning I’ll be embarking on one of the most ill-advised wrenching trips…possibly ever. That’s because a few months ago I spontaneously bought a 1969 Chrysler Valiant Wayfarer “ute”located in the middle of nowhere, seven hours inland from Sydney, Australia. My plan is to fly to Australia from Detroit and road-trip the $900 machine to the World’s largest Ute show before exploring more of the country. But first I have to fix the crusty ute, and to aid me on that front — I’m proud to announce — I now own a parts car!

I’ve got to give the credit to Laurence, the reader from the Dubbo area of Australia (basically in the middle of Nowhere, New South Whales) [Editor’s Note: I was going to fix this to “Wales” but this is just too funny a typo, so it stays. — JT] who volunteered to buy the first ute on my behalf a few months back after he and I got to talking over Instagram about the 1965 Valiant I bought in upstate New York last fall. Turns out, Valiants are quite popular in Australia; In fact, one of Laurence’s buddies had a spare “VF”-generation Chrysler Valiant Ute body sitting around, and after looking at my rustbucket, Laurence figured it might actually make for a good donor, so he bought it and hauled it back home, where my 1969 sits.

Laurence says the new parts vehicle might actually become the primary project car given its relatively rust-free body. Look at this thing from the passenger’s side; the panels look good!:

And hell, there’s even a flame painted around the gas cap: 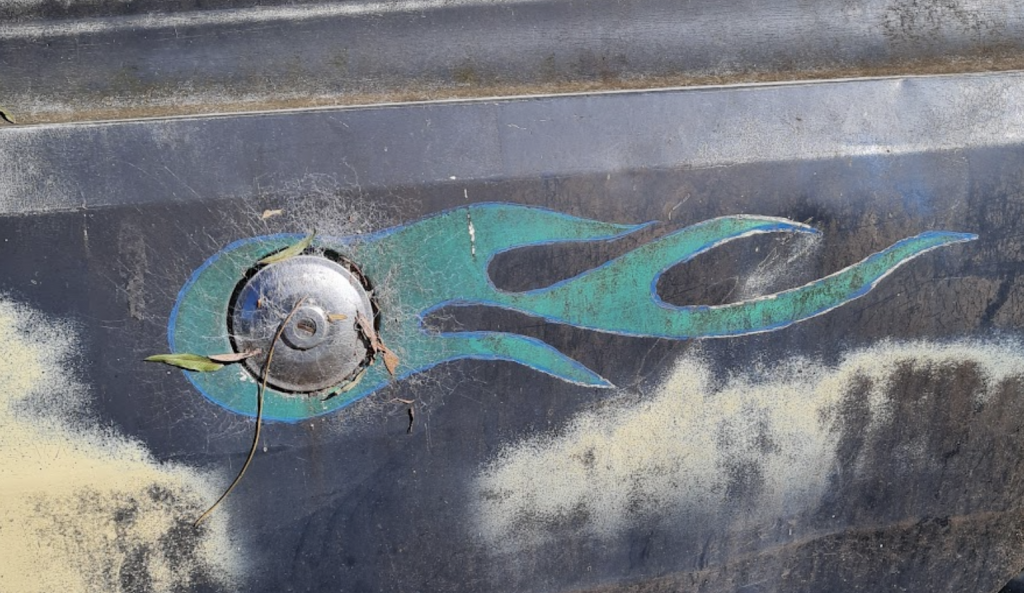 Okay okay, if you look at the ute from other angles, things do look a little more, um, dire: 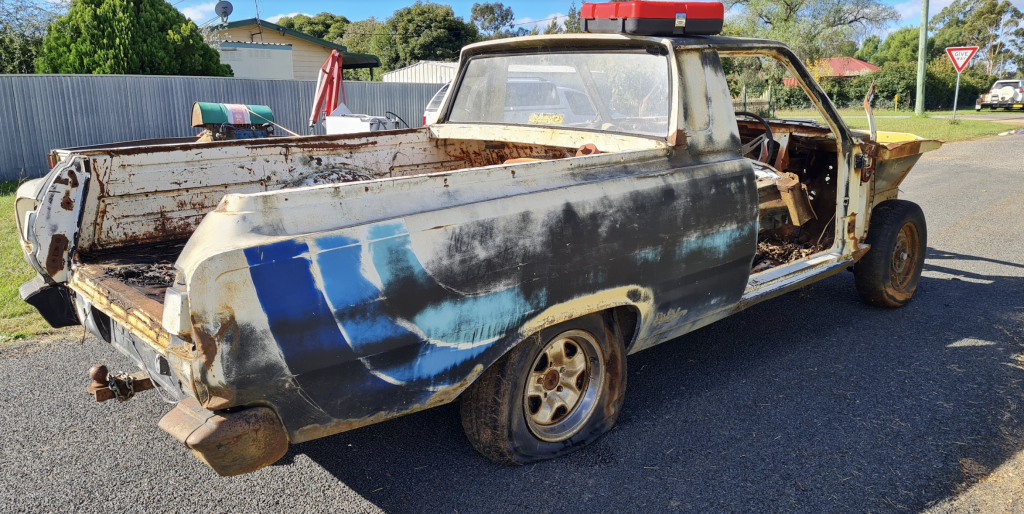 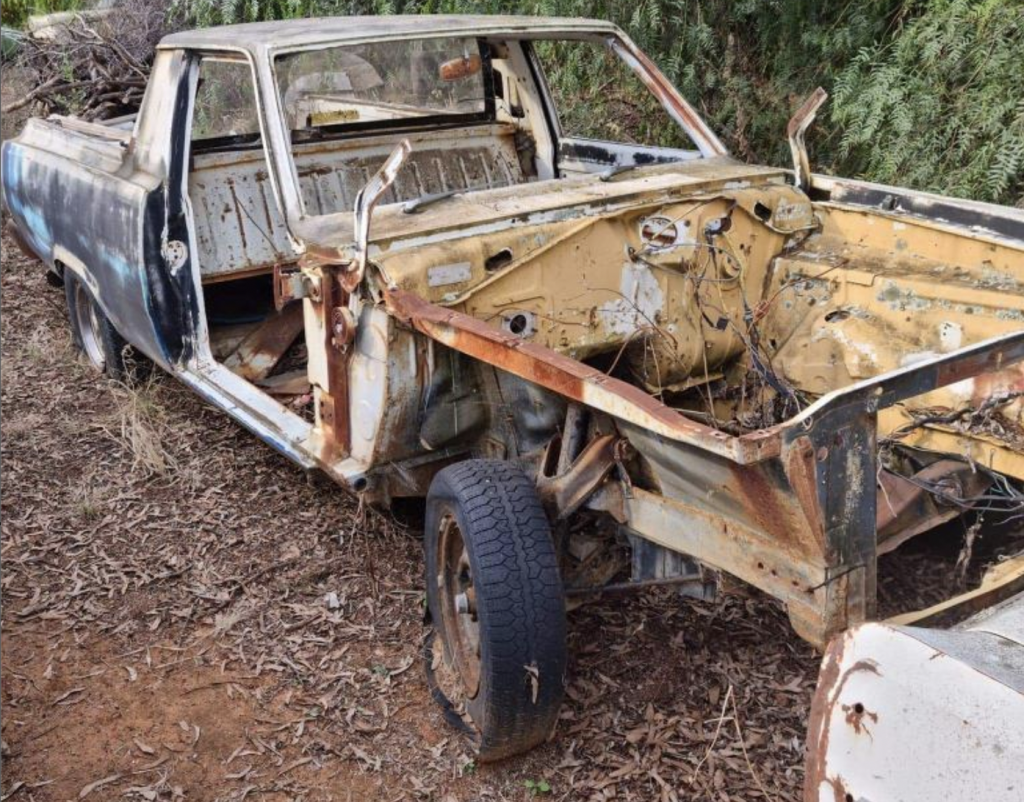 But don’t let those missing panels fool you; this is a solid chassis. Just look at that front unibody rail — unlike the one on my other Valiant Ute, this thing is straight as an arrow! And that’s a big deal, given that I have to get my machine through Australia’s inspection.

[Editor’s Note: I just want everyone to look at the picture up there and really let it sink in that that is what David thinks is his key to passing a government inspection. He looked at that and thought “oh good, now I don’t have to worry about paid government officials not letting me take a shitbox on Australian roads.” Fucking hell. – JT]

Laurence and I had a little video chat the other day to go over our newest acquisition.

As you can see in the image above, that transmission tunnel has been thoroughly “massaged” to fit some other powertrain.  I can’t say I’m a huge fan of this handiwork. 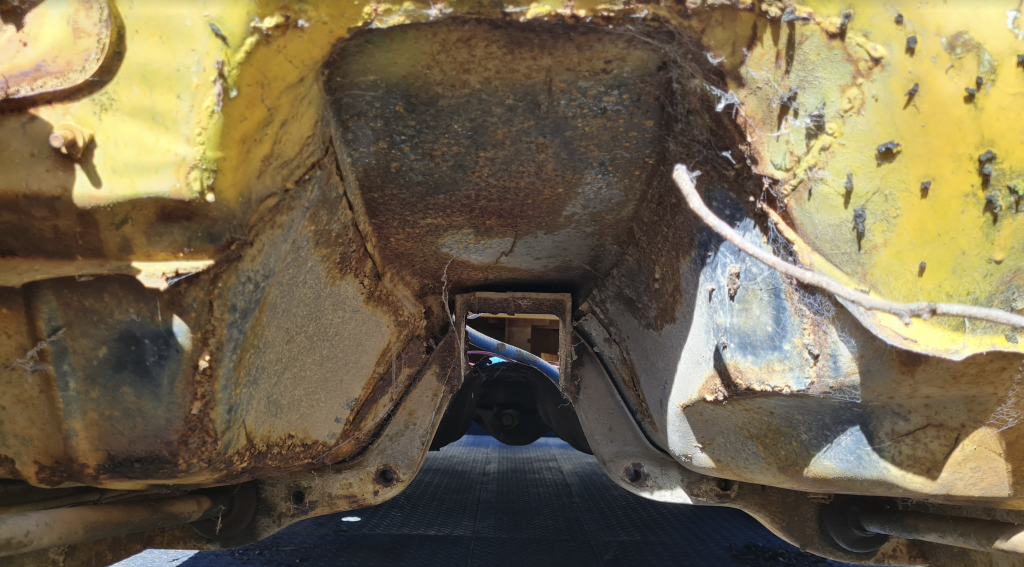 Laurence also managed to snag a spare Hemi Six engine — this one the smallest 215 cubic-inch, though he’s got a line on a 245. That’s the Australia-only straight-six based on a prototype Chrysler design that never came to the U.S. The engine replaced the venerable Slant Six starting in 1970-and-up Australian Chryslers; I badly want to experience this mysterious engine’s prodigious reliability and torque, so I’ll be swapping one into my ute: 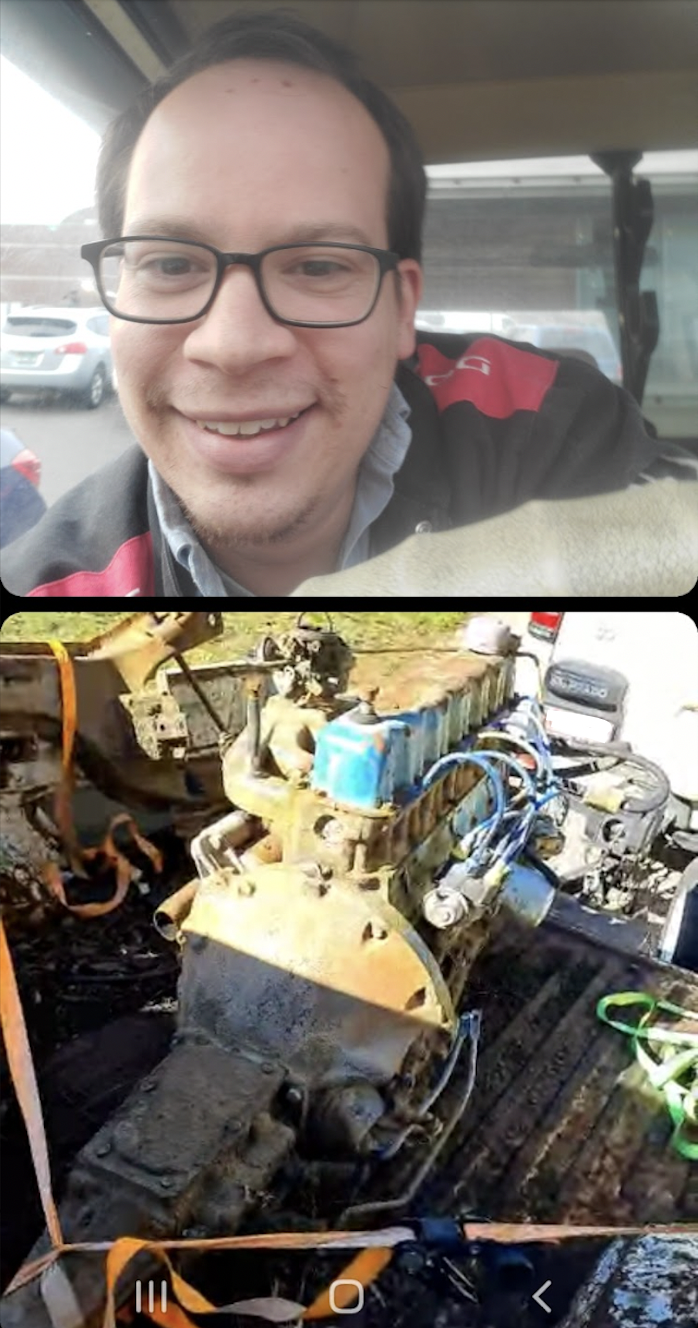 For just a few hundred bucks, Laurance got a whole other Valiant ute, plus that engine and a three-speed manual transmission. The man’s ability to acquire Chrysler Valiant parts is unmatched.

You can see in the screenshot above the pedal box that Laurence snagged. I plan to convert my Valiant — currently a slant-six automatic — to a column-shift manual Hemi Six. Is this complicating things a bit given the current state of my Valiant? Absolutely. But as cool as the “ute” side of things is, I’ve already experienced the joy of the Slant Six, since it was offered here in the U.S. There’s no way I’m flying all the way to Australia to drive around a car with the same powertrain I can get stateside when there’s a mysterious inline-six that will plop right in.

Sadly, the column in this new parts vehicle has the shift tabs all broken off, though the good news is that Laurence has spare manual steering columns. Hopefully one of the works and doesn’t jam up too often as these columns tend to do. 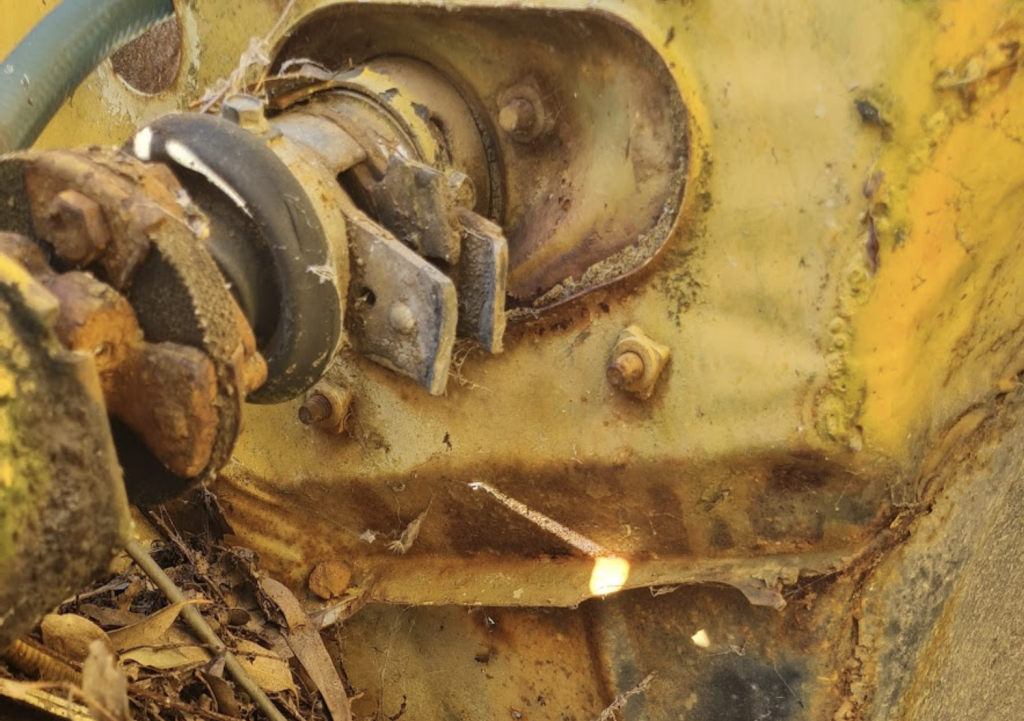 The column is obviously not optimal, but on the plus side: Look at these rock-solid floors!: 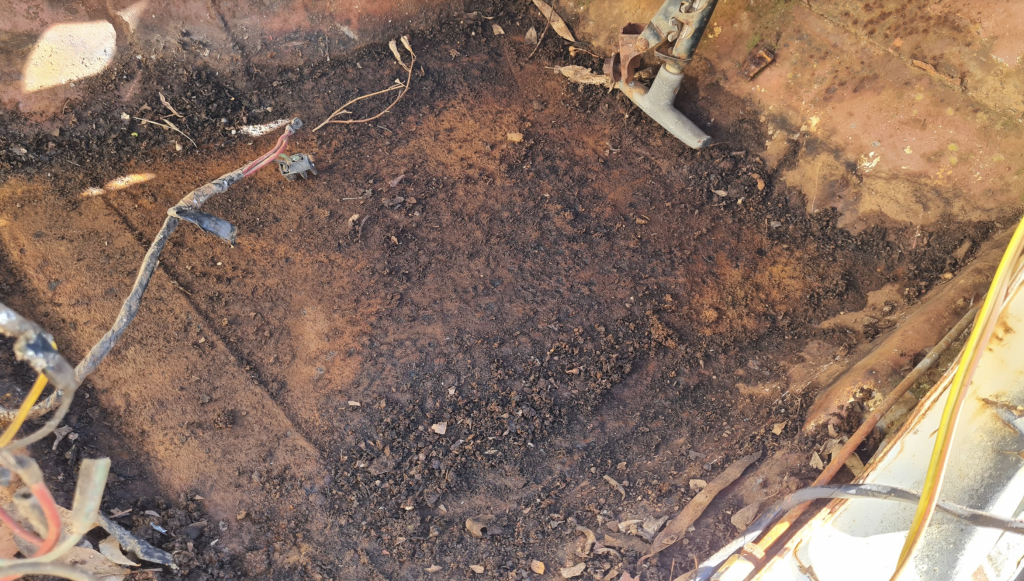 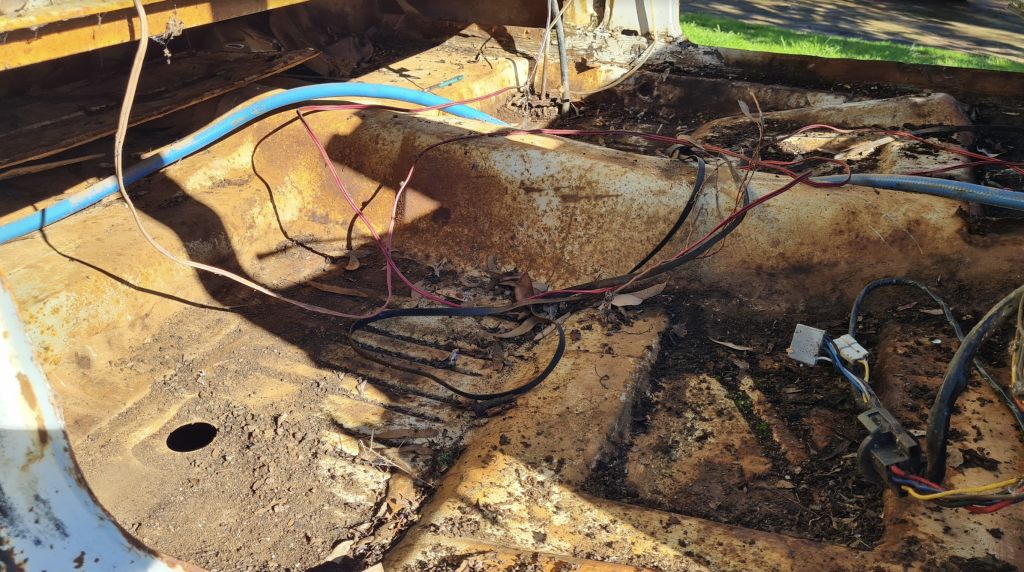 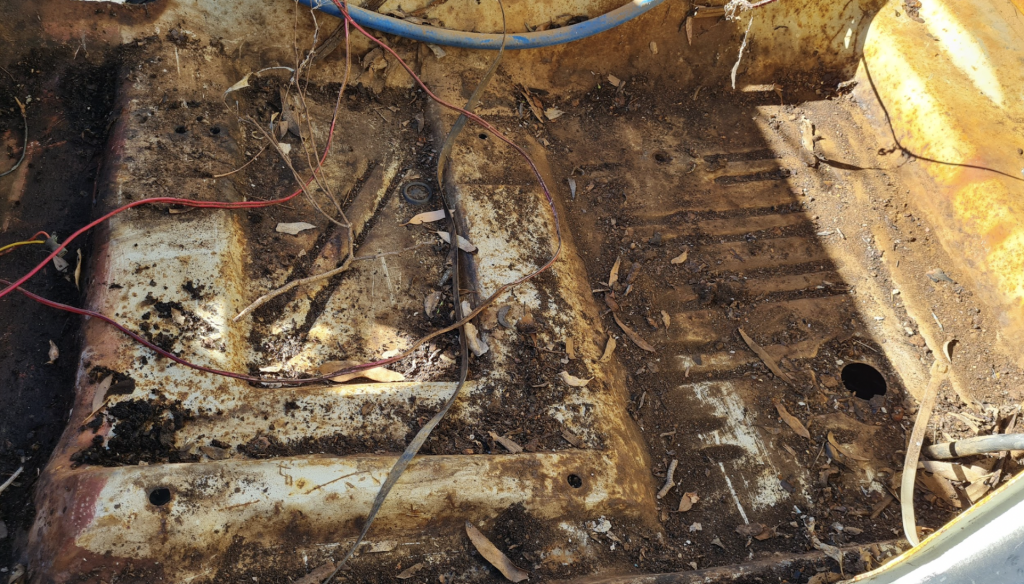 Even the bed floor only has a couple of holes in it, meaning the under-bed/behind-bench storage — which is essentially the second-row footwell of the Plymouth Valiant wagons offered in the U.S. (this is the platform on which the Australian Valiant utes were based) —  will only become a little wet if it rains.

[Editor’s Note: David, this is an automotive website, not an archaeology website, which you seem to be confused about, based on these pictures. Are those potsherds in there? –JT] 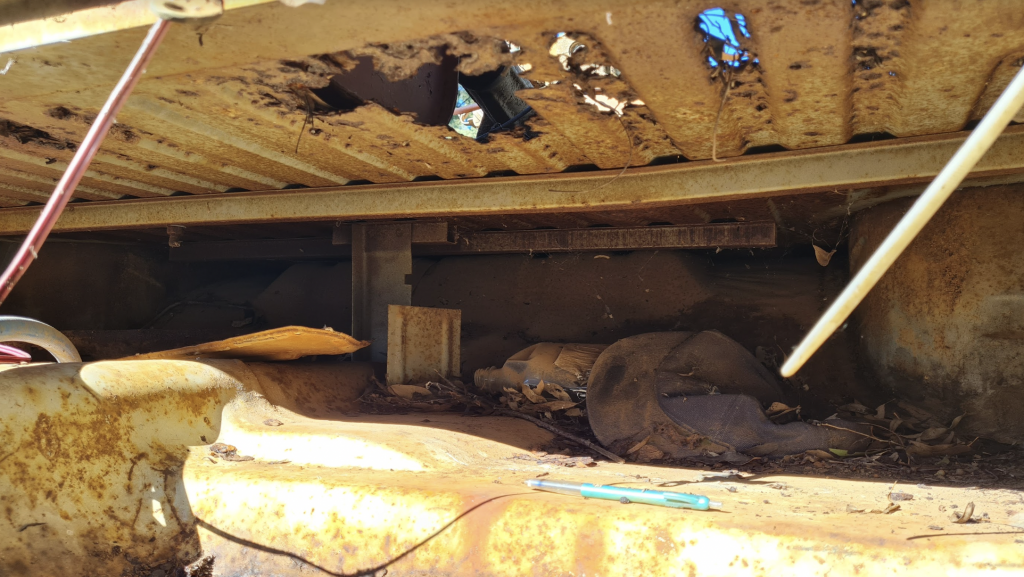 Laurence also has a spare front subframe/K-member, which is important part needed to swap the Slant Six for the Hemi Six. 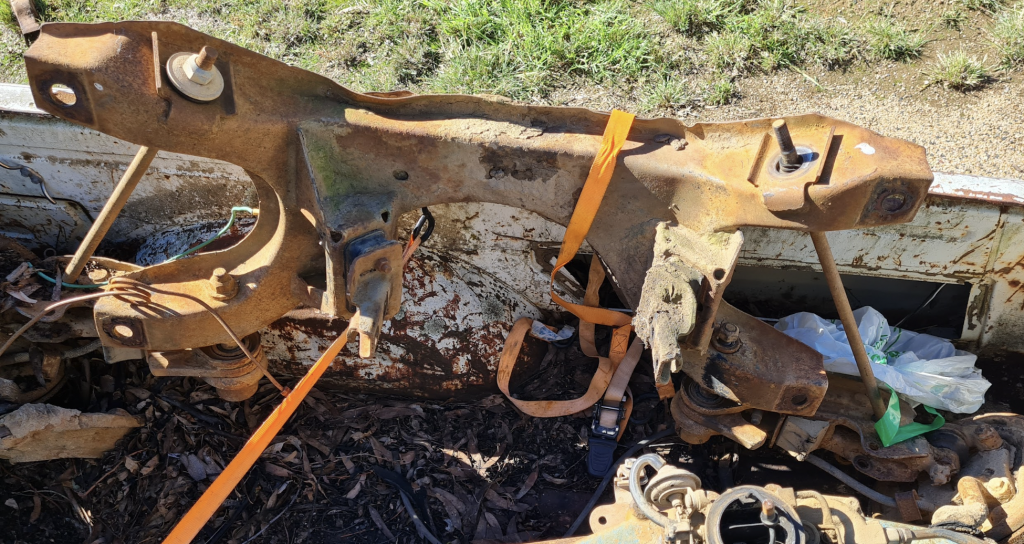 Speaking of the Hemi Six, here’s a closer look at the 215 Laurence snagged for cheap: 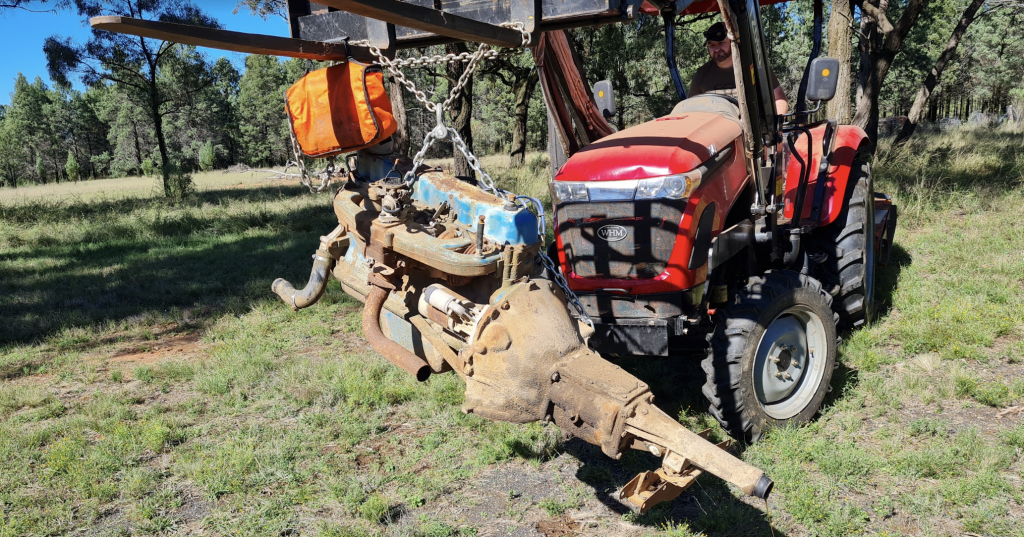 Here are a few more images of my parts vehicle. The dash could definitely be a bit more complete: 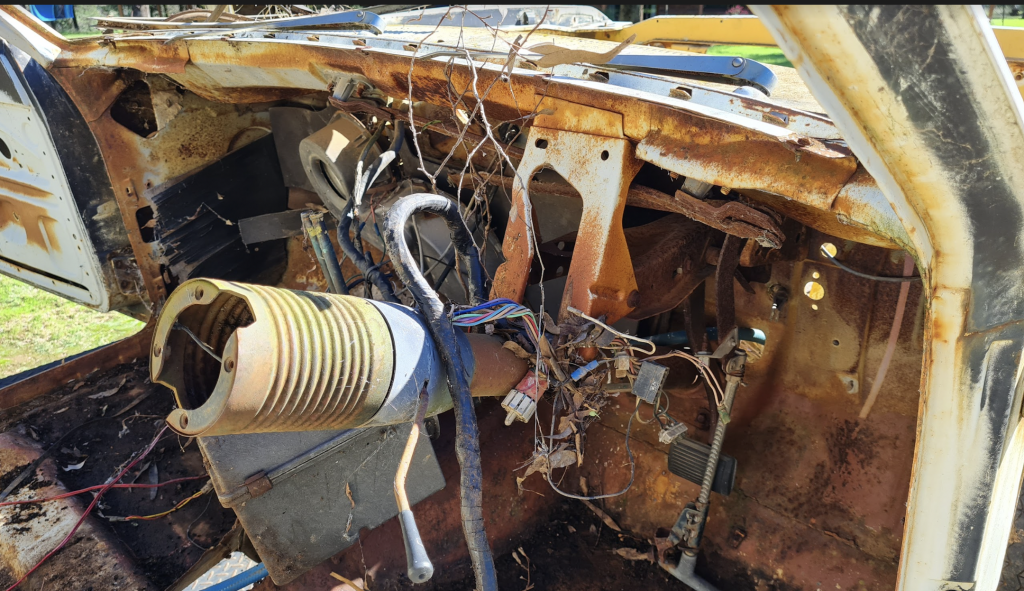 Oh, here’s a little frame-mounted bracket that holds the Z-bar for the clutch linkage: 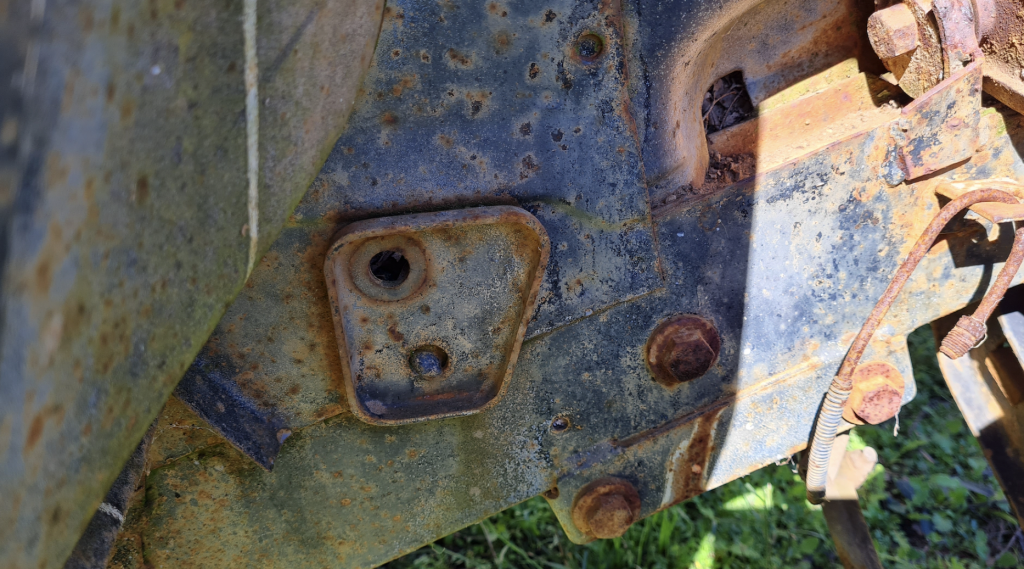 I’ve got to be honest with you: I have no idea how I’m going to pull this off. I’ve got obligations in late August and early October, meaning I’ve only got September to fix this ute, get it through inspection, and road trip it. That just doesn’t sound like enough time. I may have to cancel my August obligation and make it up to my friend (We were set to go to an Alan Jackson concert in Lincoln; maybe we can go to one in Pittsburg in October instead? I’ll talk to him. I really hate canceling plans on people).

Perhaps as concerning is the 14 hour time difference between the U.S.’s east coast and Australia’s. Back when I worked at Jalopnik, I used to visit my brother in Hong Kong quite frequently. Writing from there was tricky due to the 12 hour time difference. Now that I’m The Autopian’s Editor-In-Chief, I edit almost every article that goes up here; Editing from 10 PM to 5 AM, all while I’m wrenching on a genuine shitbox doesn’t seem feasible. This just means I’ll have to set some processes in place to make sure this place still runs smoothly for those five weeks I’m in the bush.

There will be plenty of wrenching content coming from me, and I’ll still edit the big stuff, but daily small blogs: That’s all Jason. (So you can all expect lots of wacky stuff during that period, as Torch Unleashed is quite something).

But I’ll figure it out. One way or another I’m going to keep this site humming while wrenching on — and hopefully cruising around Australia in — a Hemi Six-powered Chrysler Valiant Ute. Should a 30 year-old like me maybe be focusing on other things like dating and family-creation and homeownership and other responsible things? I don’t know; I’ve been told this. All I can tell you is that I’m currently blinded by the glory of that blue Hemi Six sitting in the bed of my parts Valiant. I can’t wait to fire that thing up.

Rust-loving Jeep man, cofounder and EIC of The Autopian, Jason's friend. Email: david@autopian.com
Read All My Posts »
PrevPreviousTo Turbo Or Not To Turbo? Battle Of the 5-Cylinder Benzes
NextBucking The Trend Of Ever More Expensive Cars, The Updated Kia Soul Cuts Its Most Expensive TrimNext