I’ll admit that even though my line of work is creating words and images and occasionally videos to place on the internet in the hopes that other humans will choose to read those words, look at those images, or watch those videos (really, those are just a combination of spoken words and a bunch of images every second), I still can’t always understand just why some things get all crazy popular while other things don’t. Today I happened to come across one of these sorts of things, an extremely well-executed but baffling video about a fictional nuclear fusion-powered “sky hotel.” Why have so many outlets written about this thing that very much does not, and, likely can not, at least in the nearish future, exist? Why am I writing about it? What the hell is going on?

I better show you the video in question, so you know what I’m going on about:

The video, done by Hashem Al-Ghaili, was based on this illustrated concept for a flying hotel: 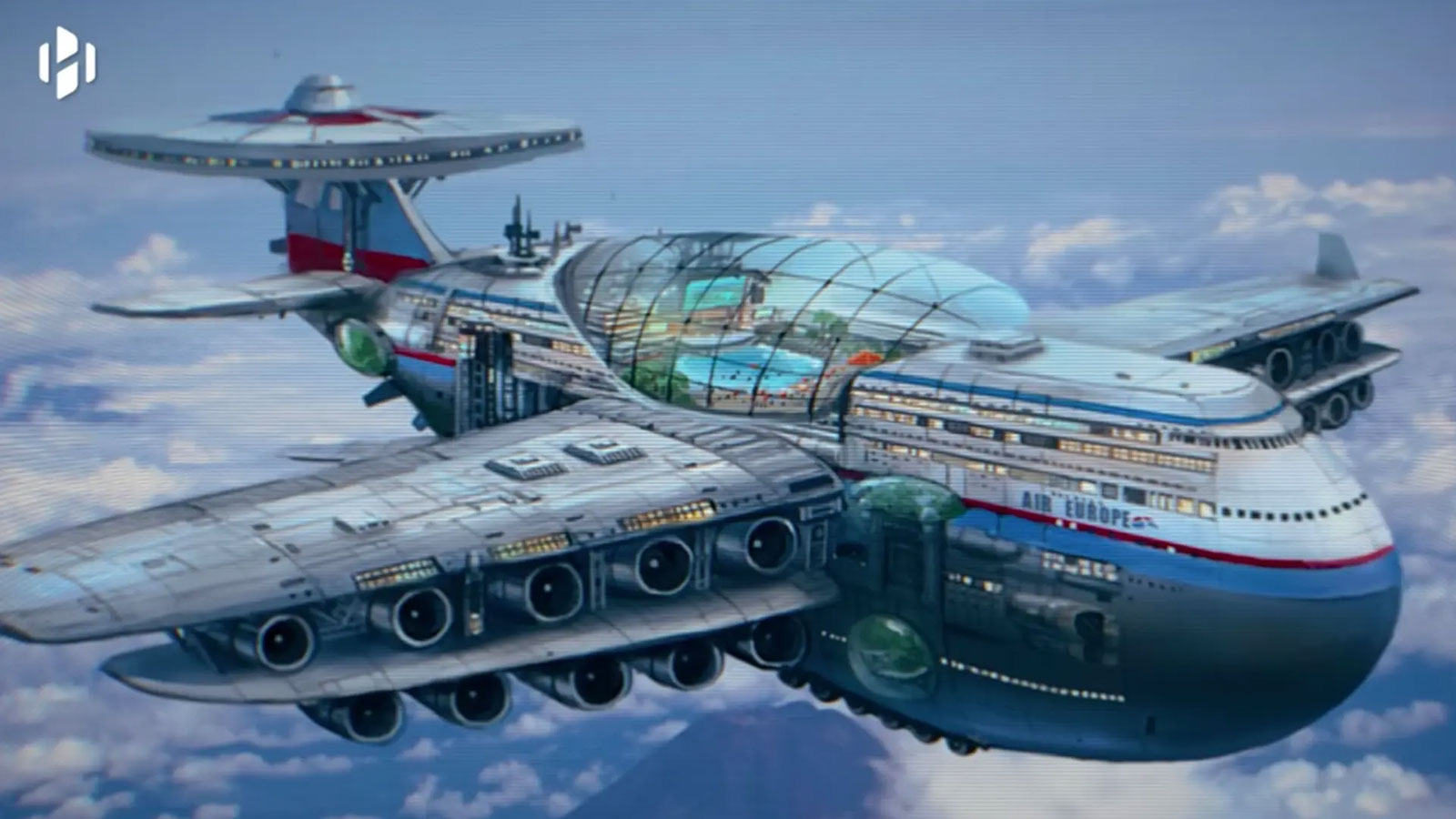 It’s like something a kid might draw. A very talented, imaginative kid, but still. And I don’t want that taken as a slight, as there’s always a place for this sort of thing, but the fairly straight coverage this is getting, with headlines like:

Essentially, this is just the modern version of those Popular Mechanics or Popular Science or Science and Mechanics and probably Popular Popular covers that would show wild, futuristic techno-fantasies, sometimes even of essentially the same sort of colossal, atomic-powered aircraft: 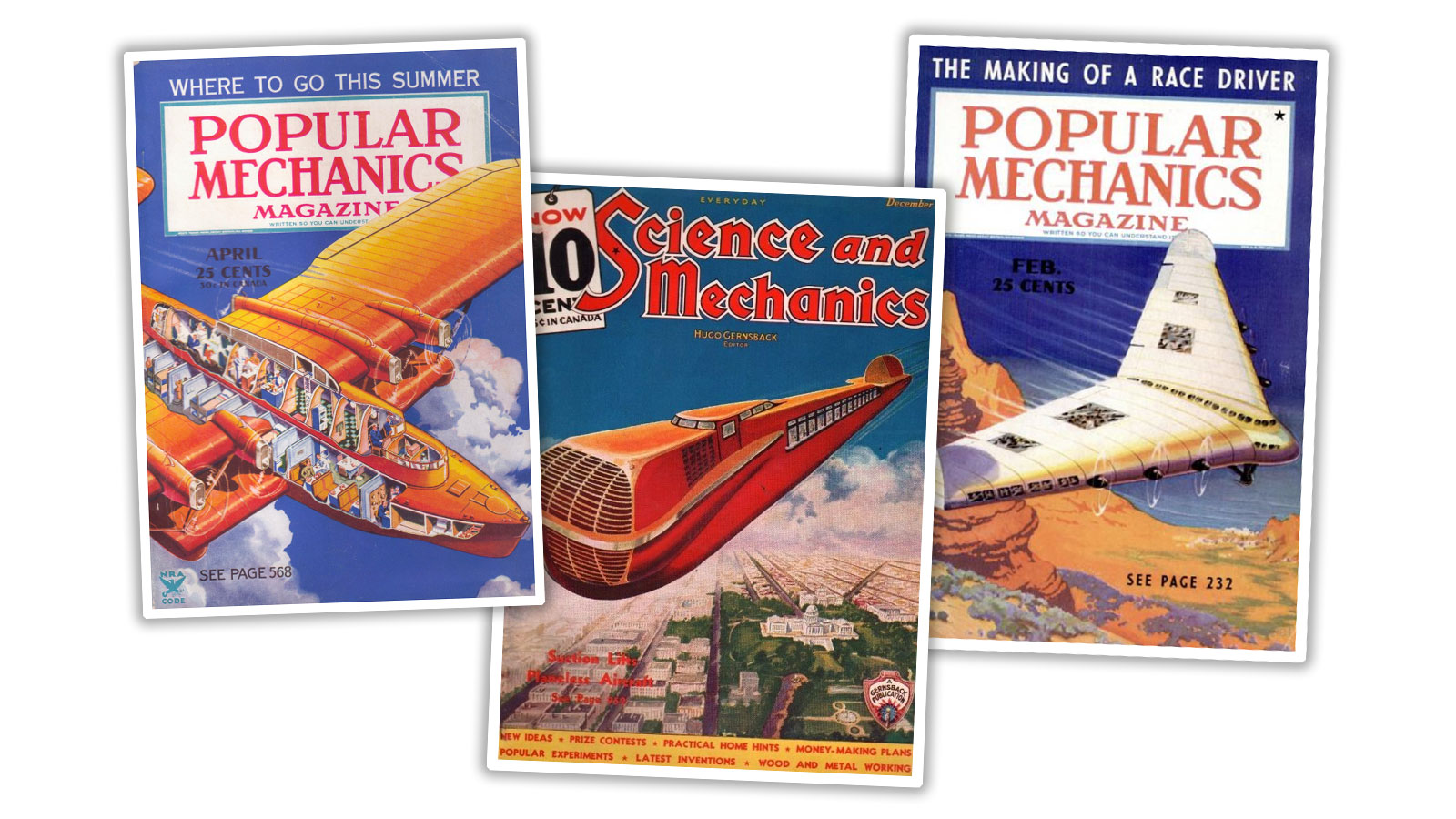 Really, we’ve been here before. Many times, even. Gigantic aircraft, flying hotels, atomic/nuclear-powered aircraft, this is well-trod ground. Hell, back in 1945, Martin Aircraft proposed a flying hotel based on their Martin Mars cargo aircraft: 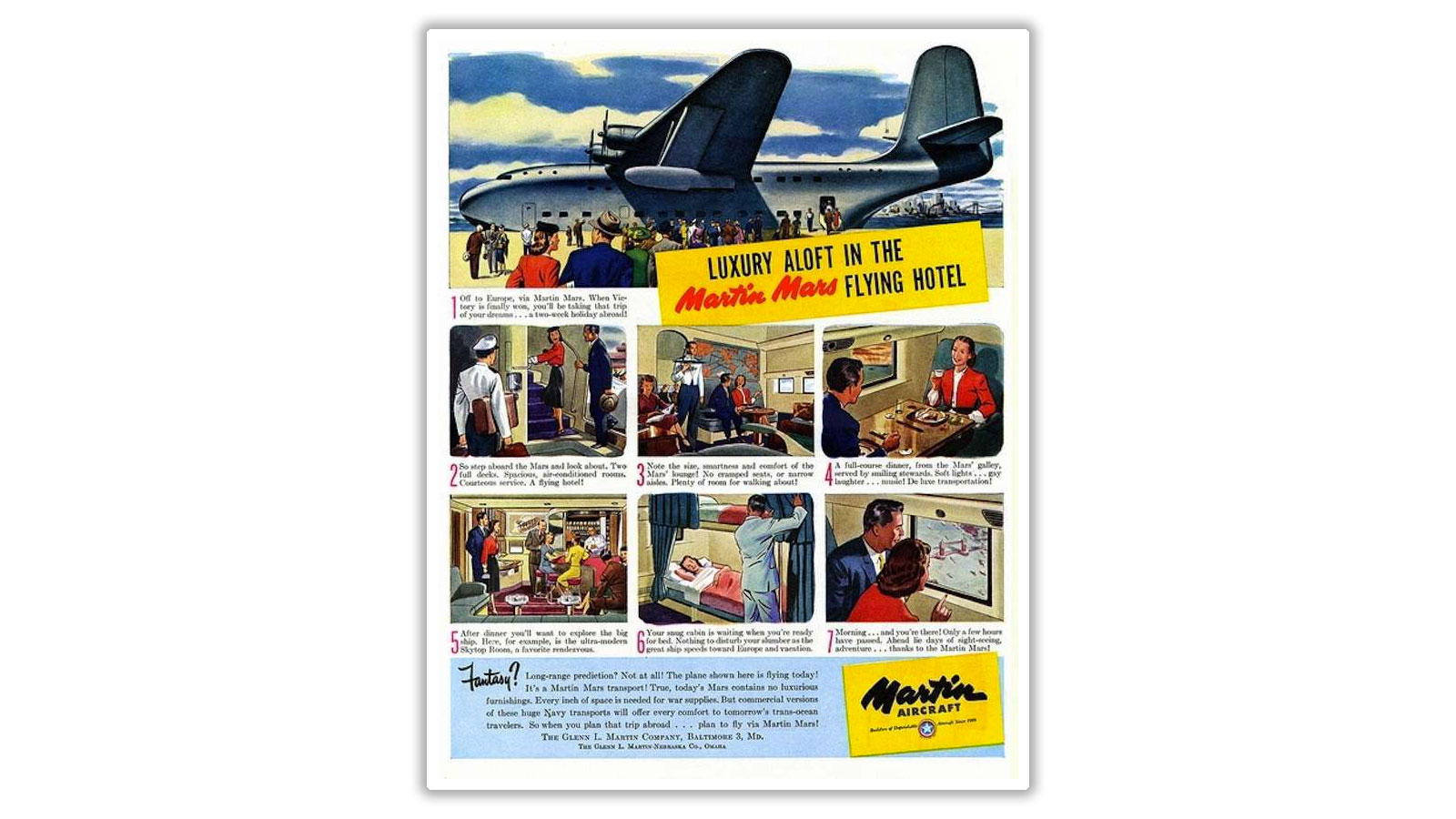 So why did this recent animation capture so much attention now?

I mean, it’s not even remotely plausible: the crucial technology that’s mentioned to run all of the electric engines that keep this massive Love Boat in the sky rely on nuclear fusion, which, while a lot of interesting progress has been made recently, has yet to reliably demonstrate it can produce more energy than is required to sustain the fusion reaction. It just doesn’t exist yet.

I’m not saying this thing isn’t fun, but it’s basically just a very well-executed fantasy drawing, no different than those old magazine covers, just someone taking a “wouldn’t it be cool if” train of thought and making it visual. Clearly, there’s some sort of latent desire for a large flying hotel type vehicle, at least among some segment of the population. Back in 2006, the concept was for a massive lighter-than-air dirigible-type aircraft to do the job: 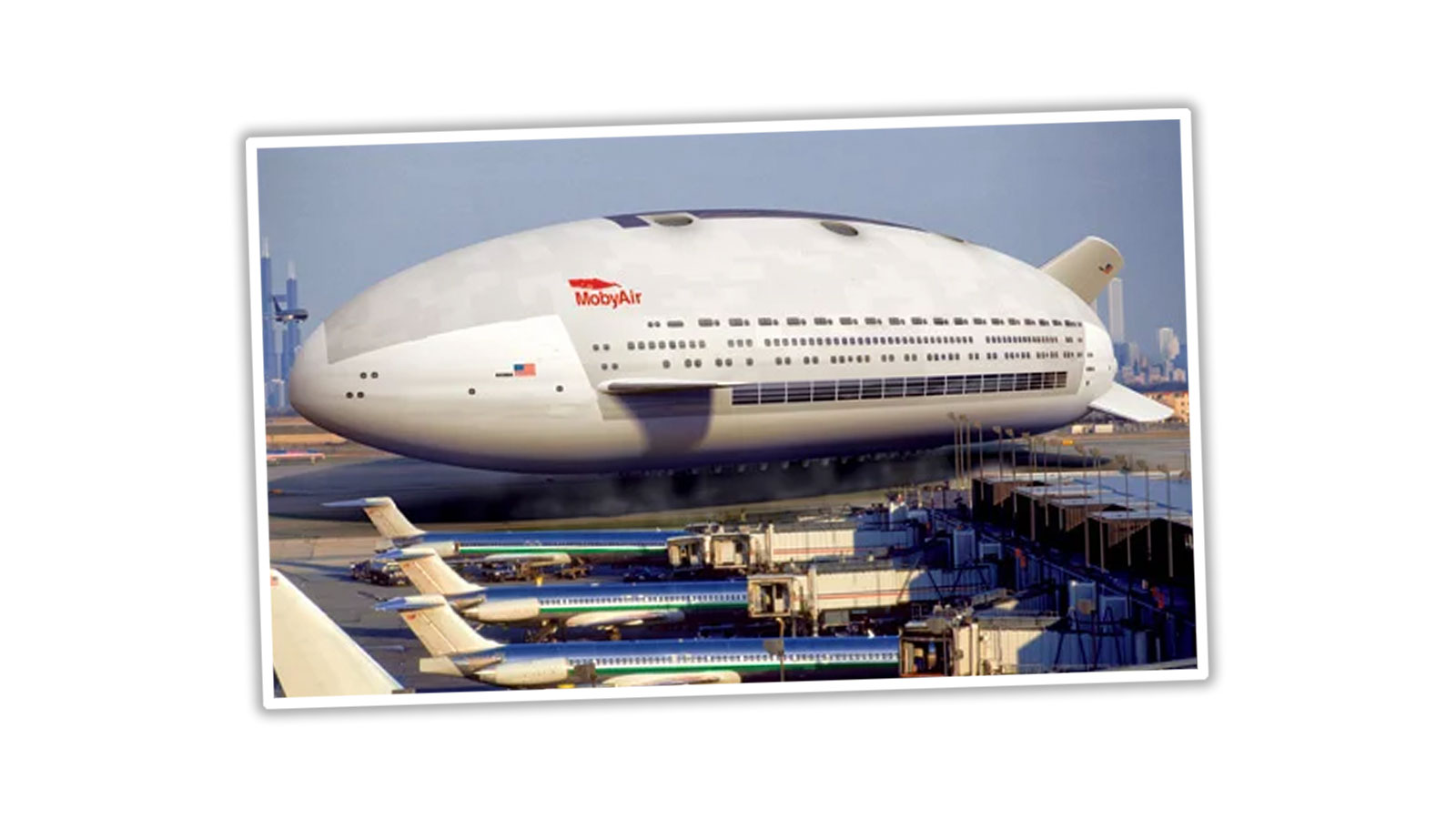 And there were other blimp/airship flying hotel concepts. some with dramatically unexpected shapes, like Seymour Powell’s AirCruise concept:

Sure, it looks different, but it’s basically the same rich-dude masturbatory sky-vacation shit: float in the air in incredible luxury, look out at clouds in post-coital bliss, then eat lots of shrimp or something. And that one is from 2010.

That concept was a bit more plausible at least because it didn’t rely on still sci-fi technologies like sustainable, compact nuclear fusion reactors. And, even if we just somehow accept that the technology is possible to make something like this work (hopefully, they’ll make it so the landing gear actually retracts, which the video does not show) there’s still so many logistical issues: how is maintenance to be done while in flight? What about resupplying water and food and all the merchandise that will be sold in the flying Sunglass Huts and Gucci stores and Hot Topics? Can passengers fly to it and board while it’s in the air? Is there a way to evacuate in an emergency? The video suggests this is the case, but, come on – pilots are going to be cool with maneuvers like this? 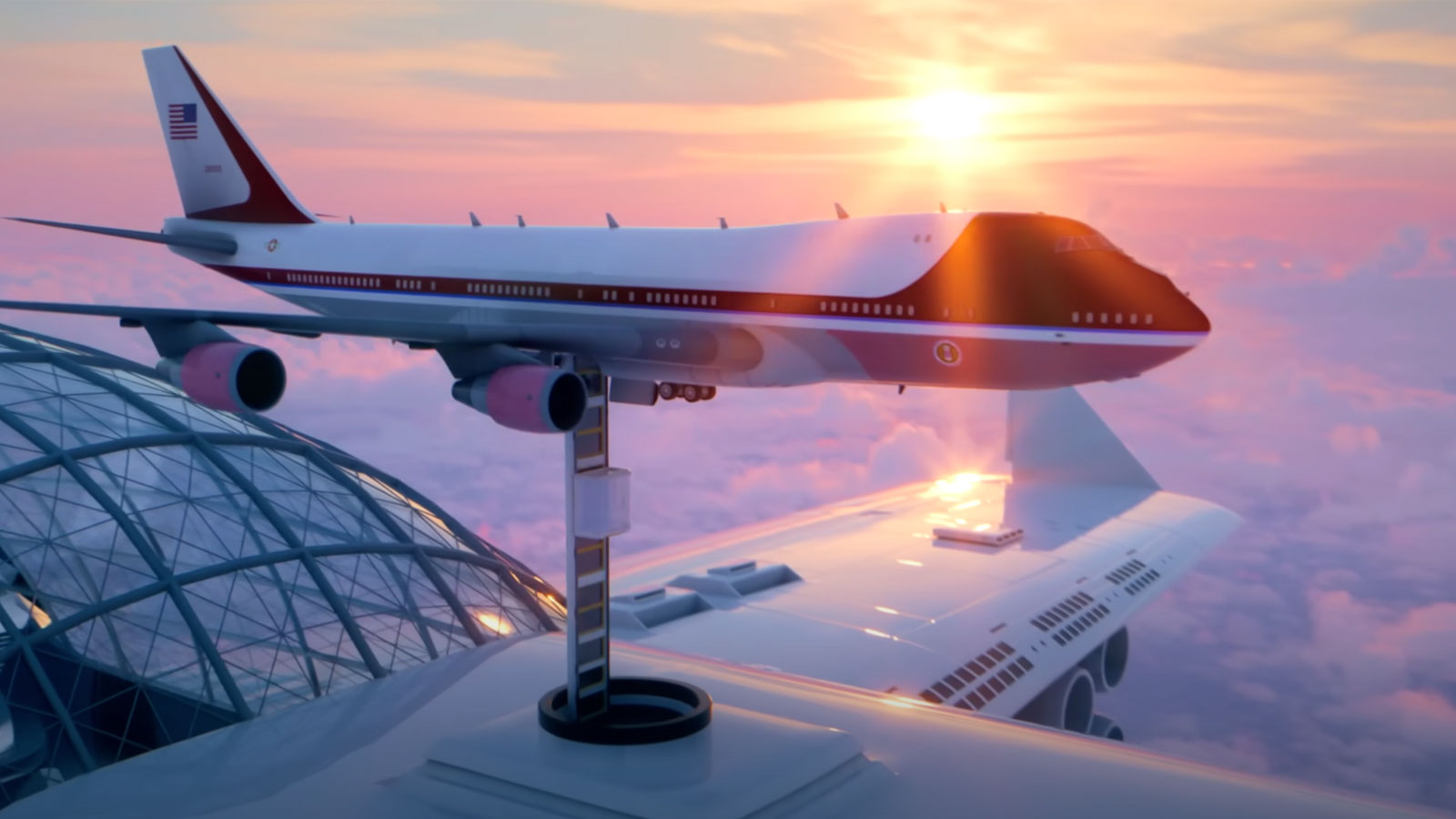 Just look at that up above there, with what looks to be Air Force One docked to the Sky Hotel. You’d have to be an absurdly good pilot to make this work, dealing with wake turbulence behind the massive hotel to just approach it, then positioning the 747 exactly above that elevator thing, which would also need to be able to support the weight of that 747 and deal with any motion that either plane may impart, being able to detach readily, before damaging either aircraft, there’s just so many issues here, so little room for error before distaster. Why?

If it crashes, what happens to the torus of star-hot plasma that powers the fusion reactor? Do we just let it burn a hole down to the core of the Earth and just put some orange cones around the rim?

I’m all for imagination and fun and absurd ideas – I think my life’s body of work should prove this – but there’s just something about this whole thing that rubs me the wrong way. Is it the lavish, absurd, needless decadent luxury of it all? The complete ignoring of physics and engineering? The dumb look? My own small-minded bitterness? Is it just me, being a dick?

I’m not sure, to be honest. Let’s ask Mercedes; she’s actually had flying lessons, after all.

When I watched the video I had to check and see if it wasn’t an April Fools joke that everyone had collectively missed. This thing is what, twenty times the size of a Boeing 747? Yet it appears to have just 26 wheels. That’s six fewer wheels than the recently destroyed Antonov An-225. Sure, each wheel appears to be the size of a semi truck, but I somehow doubt there’s enough wheel to support the weight of what’s supposed to be a flying cruise ship. And since saving weight isn’t a design goal, this thing would be comically heavy.

The animation also doesn’t seem to match up with the narration. If this is supposed to be suspended above the clouds and offering passengers breathtaking views of wildlife, it’s going to need some sort of VTOL capability, which isn’t shown. I mean, the animation shows it taking off like a plane in a short take off and landing (STOL) competition.

Instead, the animation shows the aircraft flying like a commercial airliner, but the thing is moving at such a slow speed. And unless its a VTOL or STOL-capable, I also have to think that the runway length necessary for this thing to take off has to be crazy. Maybe they’re going to use the absurdly-long runway that the plane in Fast & Furious 6 used.This is to say that this whole thing is all kinds of unrealistic and absurd. But I am amused at the visual of this thing flying everywhere with its landing gear down.

I'm a co-founder of the Autopian, the site you're on RIGHT NOW! I'm here to talk to you about taillights until you cry and beg me to stop, which I absolutely will not. Sorry. Hug? Also, David's friend.
Read All My Posts »
PrevPreviousTesla Brings Back Its Enhanced Autopilot System To Add To The Driver Assistance Confusion
NextWhy I’ve Owned 20, Maybe 30 Motorcycles In Just Four YearsNext