Last week, I announced that I will be bringing a vintage 1972 Yamaha U7E back to life. While digging through my box of parts, it hit me that this little motorcycle is actually one of the first that I’ve ever purchased. I’ve only been a motorcyclist for just over four years, yet swinging a leg over two wheels has been so liberating that I’ve owned over 20 motorcycles.

I’ve been getting personal in my time here at The Autopian. I probably have a whole library of stories that I either haven’t been able to tell before or have been lost into the abyss of the internet. I’m happy to have great friends and editors here who let me pour my heart out.

One of the most influential moments in my life was in 2018 when I took a little Smart Fortwo off-road. I recently wrote about why such a simple event was so grand for me. But for a quick recap, life hasn’t always been crazy adventures in fiery vans or buying my dream cars. Instead, it was often a daily fight for life. Not long after I came out as transgender in 2014 my support system almost entirely collapsed. I lost my best friends and my family had considered me dead. Yet, an unexpected support system came from the sweetheart denizens of Opposite-Lock. One of them even housed me in their home as I escaped toxic people.

By 2018 I managed to work my way through so much of that pain. I was independent and supporting myself to the point where my therapist of three years concluded that her job was done. I moved out of a house that I was bamboozled into signing a fake mortgage for. Finally, I was truly on my own, and I moved into an apartment that put physical distance between me and the people that made me shed all of those tears over those years.

One spring day that year I found myself scrolling through Opposite-Lock. Someone had posted pictures of their latest motorcycle ride. Who it was and what the motorcycle was escapes me, but a switch flipped in my head. I always thought motorcycles were cool, but it never crossed my mind that I could ride one. I signed up for the soonest Motorcycle Safety Foundation course that I could find in my area.

Beginnings Of An Obsession

Almost immediately, I was addicted to motorcycles. I bought my first and my second three weeks before I had even taken the course. The first was a 2000 Buell Blast for $1,200. Countless people told me not to buy one of these, citing how slow they are and how prone they are to breaking. But I loved its design and I adored all of the little quirks that Erik Buell baked into his motorcycles. I still do, actually.

I’m going to cover the rise and fall of the Blast in another article, but I’ll just go over a short list of what makes these different. The body of the Blast is molded-in-color Surlyn polymer. It’s a plastic designed for golf balls and car bumper covers. The idea here is that you could drop the Blast and its plastics won’t break apart like they might on a different motorcycle.

Like other Buells, the Blast featured a belt drive and floating brakes. It doesn’t have Buell’s signature frame that also doubles as a fuel tank, but the swingarm is an oil tank.

My MSF course took place in late May 2018 and I was one of just two women in the class. It took no time at all for me to go from “this is pretty cool” to “I’m going to ride a motorcycle everywhere.” The instructors were impressed with how quickly I caught on, and when it came to the practical test, I managed to perform an emergency stop in a distance shorter than one of the instructors had seen in his 30 years of teaching. The emergency stop test has a minimum distance–to make sure you’re actually going the entry speed–and a maximum distance. I came so close to the minimum distance that the instructor had to pull out a measuring tape. He then tried to replicate what I did later and couldn’t.

After passing the test with almost flying colors–I put my foot down once during the U-turn test–I went home and took my very first real motorcycle ride the next day. Riding a motorcycle made me feel a sort of liberation that no car at the time could. I was doing something that my parents would have never approved of. And it was all me; I was doing it all on my own.

In hindsight, learning how to ride a motorcycle probably isn’t that huge of an achievement. But for me, it was yet another example of how I was becoming truly free and my own person. I was free from the shackles of being told what to do and who I was.

This, this was me.

Motorcycle manufacturers try to get you on two wheels by trying to conjure up feelings of freedom. It’ll be just you, your hog, and the open road. But a motorcycle really did mean freedom for me, and it was so exciting that motorcycles became an obsession. I had to ride as many motorcycles as I physically could.

I found an easy way to achieve that, too.

Learning How To Wrench

The second motorcycle that I bought was a Chinese scooter for $200. It was a 2008 Bashan MC-16-150T with all of three miles on its odometer. Why did a then 10-year-old 150cc scooter have just 3 miles on it? Apparently, the original owner bought it during the 2008 financial crisis to save gas.

They rode it 3 miles home from the dealership and just left it in their garage.

I bought it to make a Mad Max-themed ride for the Gambler 500, and working on this little guy actually taught me so much about wrenching. The scooter didn’t have a carburetor or any fuel or vacuum lines. I found a service manual then used it to take the scooter apart before running all of the lines to fit the carburetor. Then I had to figure out how to fit the carb itself. At the time, it was the biggest project that I ever took on.

And awesomely, I even got it to run for the first time in 10 years for about 10 seconds. Unfortunately, the fuel tank had catastrophic rust and I had decided that I had learned enough from the scoot.

Perhaps the biggest thing that I learned from that scooter is that a carburetor problem with a motorcycle is easy to solve. Thus, I started searching for my next bikes. I noticed that motorcycles with cosmetic issues or carburetor issues were cheap. And bikes without titles? They were almost free! And getting a new registration for a motorcycle without a title is even easier than cleaning a gunked up carburetor. 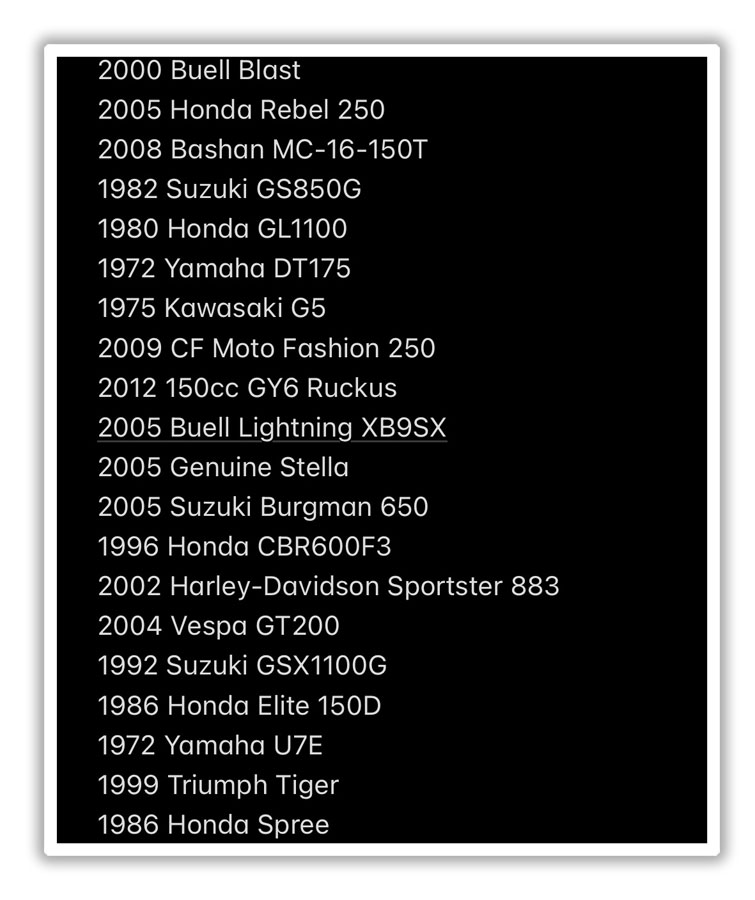 Normally, at this point I’d give you a list of all of the motorcycles that I’ve owned. But honestly, I’ve owned so many that I don’t even have a complete list.

Most of the motorcycles I bought for pennies on the dollar without titles or with carburetor problems. I would fix the carburetor and/or title problem, ride the bike for a few months, then sell for a small profit. That money would then just go into the very next motorcycle project. Along the way, my wrenching skills got better, and I even learned how to do a quick diagnosis.

One of my favorites from the bunch was a 1980 Honda GL1100. While Honda’s Gold Wing is best known as the full-dresser with car-like features, it wasn’t always the case. Early Gold Wings were available without fairings, giving you that naked cruiser look with Honda’s thick boxer four sticking out of both sides.

My Gold Wing was found in bad shape by its previous owner. He ditched the factory four carbs and installed one meant for a Volkswagen Beetle. Then he repainted all of the plastics in a gorgeous sky blue with pinstripes. The finishing touch was a seat that matched the stripes. This motorcycle didn’t have a working tachometer and sucked fuel down at a rate of 30 mpg, but it was glorious. It was like going down the highway in a La-Z-Boy with wheels strapped to it. The 1085cc flat four was supposed to make 81 hp, but who knows how many horses it still had in the stable.

I got a good 6,000 miles out of it over the course of two years, even riding it through winter snowstorms. Then it suffered two annoying issues both at once.

The first was that it blew the right side head gasket some 200 miles from home. The bike produced James Bond-levels of smoke clouds on the way home, but to the bike’s credit it still ran and rode great. Unfortunately, to fix a head gasket on the old girl would have required disassembling everything in front of the engine.

The other issue was that the starter clutch was on its way out. It got to the point where I sometimes had to try the starter 10 times before the clutch would finally work. Amusingly, the official procedure to replace it involved disassembling almost everything behind the engine. Alright, so a near full teardown to fix a $900 motorcycle. I decided hard pass on that one.

Ultimately, I stopped having a huge collection of motorcycles when one night I saw myself staring at six motorcycles under a tarp in a parking space at home. The tarp was frozen with at least a foot of snow piled on top. None of the motorcycles even ran. Most of them I had no idea what was even wrong. And just a few nights before, I nearly crashed trying to tow home a Suzuki GSX1100G during a snowstorm.

I considered that night my rock-bottom.

From that point forward I vowed to keep my motorcycle fleet small. More specifically, I wanted at least one bike with fuel injection. And if I am to mess with carburetors, my limit is now no more than two, unless the bike is really special.

Today, I still ride whenever I get the chance and no matter the weather. I’ll ride in a thunderstorm. I’ll ride in a blizzard. And since I’ve gotten confident in myself, I even ride in parades.

I doubt I’d be anywhere near where I am today with what wrenching abilities that I do have without motorcycles. These machines aren’t just a symbol of my own personal liberation, but learning tools. If you’re on the fence about riding, I highly recommend finding a training course near you. Maybe you come out the other side concluding that riding isn’t for you. That’s fine! But you may find a part of yourself that you didn’t know existed. Either way, I’m sure you’ll have fun.

Mercedes is a lifelong fan of all things powered by an engine. When she isn't driving one of her five Smart Fortwos or her 14 other vehicles she could be found in the cockpit of a Cessna 172 or perhaps swimming in any body of water that she could find. She also has a deep love for buses of all kinds. Please send her buses. mercedes@theautopian.com Instagram: @mistymotors Twitter: @Miss_Mercedes30 Facebook.com/neonspinnazz
Read All My Posts »
PrevPreviousI Wasn’t Sure If I Wanted To Write About This Viral Video Of A Flying Nuclear Fusion Powered Hotel But It’s Just Too Stupid To Ignore
NextThe Forgotten Suzuki Verona Was A Strange But Comfy Ex-Daewoo With An Unexpected Porsche EngineNext