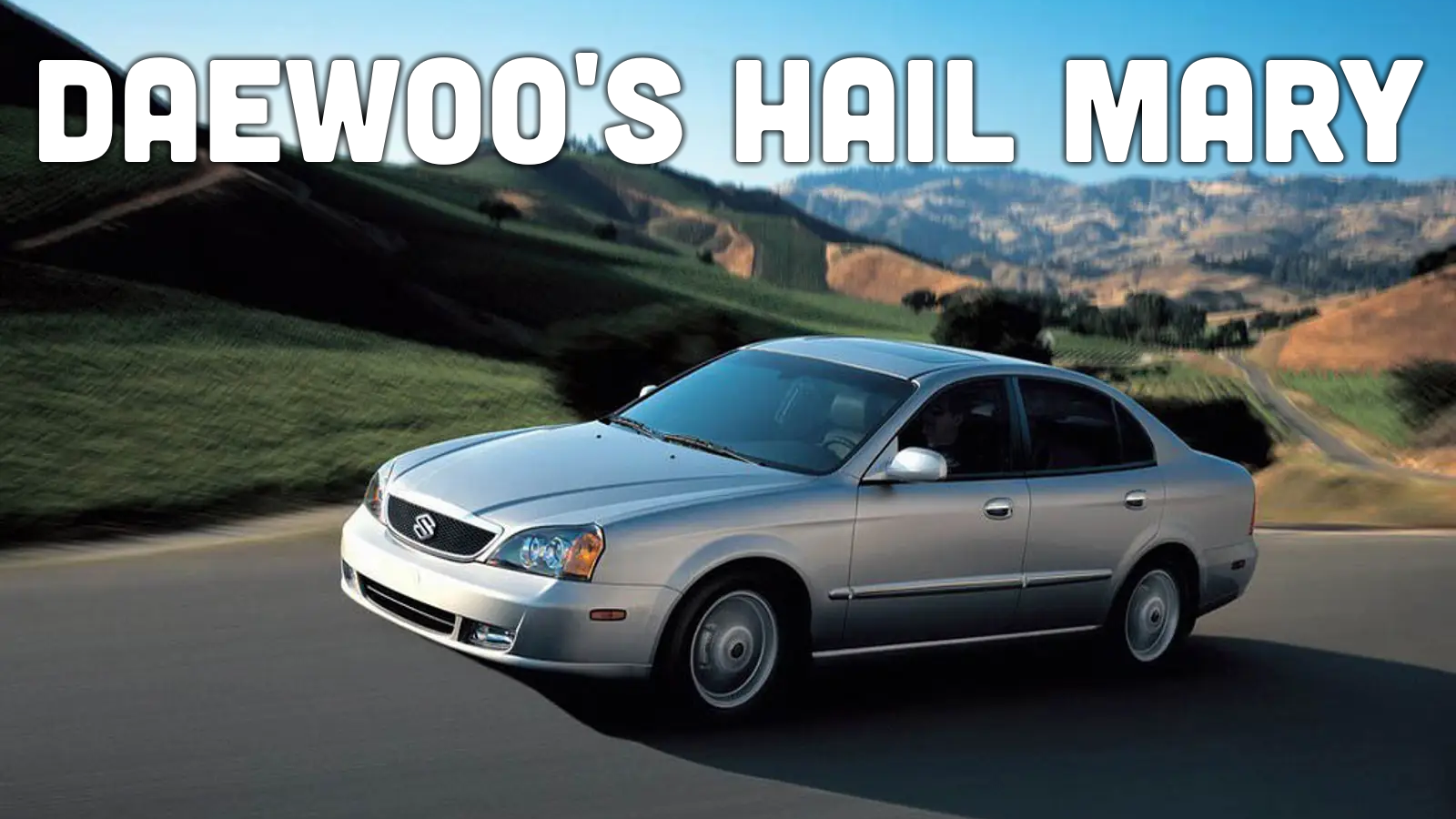 If I asked you to picture a car with a Porsche-developed engine and styling penned by Italdesign, you’d probably think of some swoopy low-volume exotic. But what if I told you that a vehicle that fits this criteria can be found for cheap in just about every city in America? Say hello to the Suzuki Verona, a midsize sedan that’s far more interesting than it lets on.

In the beginning, there was the Daewoo Leganza. While it wasn’t exactly the paramount of elegance, the Leganza was a bold step by its Korean makers, one intent on penetrating the American midsize sedan segment, coming from behind to reach around and grab a nice small slice of market share. Not only did the Leganza grab styling influence from Giorgetto Giugiaro’s forward-looking Jaguar Kensington concept, its development process took just 30 months under the watchful eye of Dr. Ulrich Bez. You know, the father of the 993 Porsche 911 and nearly every gorgeous Aston Martin launched in the 2000s. Unfortunately, the Leganza entered the market right as things were beginning to turn for Daewoo.

While Daewoo’s American sales process of bringing on college students as ambassadors and sticking them with 1099s for discounts on cars was bad, things were even worse in Korea. See, Daewoo was on an absolute spending spree in the 1990s, developing brand new cars and acquiring SsangYong Motor. All this spending cost Daewoo money it didn’t have, and racking up all that debt just in time for the Asian financial crisis was most certainly a bad idea. To make matters worse, Daewoo wasn’t just a car company, it was a chaebol, or large industrial conglomerate, and this debt-happy philosophy permeated every corner of its businesses. As a result, Daewoo collapsed in November 1999, with debts totaling billions of dollars. Through bankruptcy, things got parceled off, including a sale of the automotive division to General Motors, Suzuki, and SAIC. However, before such parceling off could take place, Daewoo Motors still had one last trick up its sleeve.

See, GM didn’t buy Daewoo Motors until 2002, which gave the ailing Korean car company just enough time to pull together one more fully-finished midsize sedan that went by the name Magnus. Because Daewoo didn’t have a ton of money, the Magnus was built on stretched Leganza underpinnings, sort of like how Thanksgiving turkey gets chopped up and put into sandwiches. However, not only did Italdesign try its hardest on the Magnus’ sheetmetal, Daewoo knew that the Leganza’s GM Family II engine was older than dirt, so it hired Porsche at great expense to help engineer a brand new motor. This is where things get weird. If you’re given a clean sheet to design any engine for a transverse application, what are you going to draw? Probably some sort of twin-cam four-cylinder or maybe even a 60-degree V6, right? Nope. The Magnus packed a 2.5-liter inline-six sideways between the strut towers.

Alright, so how on earth do you fit a transversely-mounted inline-six in a car that isn’t 35-and-a-half feet wide and doesn’t have the turning circle of the International Space Station? If you’re Volvo, you turn the engine backwards and run all sorts of accessories on the transaxle side using a special drive assembly. If you’re Daewoo and Porsche, you just go with a small 77 mm bore and a big 89.2 mm stroke. That’s a bore two millimeters smaller than you’d find in a Ford Fiesta’s 1.6-liter four-banger and a stroke almost three millimeters longer than on a GM 3800 V6. [Editor’s Note: What the hell? This feels like the least-Porsche Porsche engine that ever Porsched a Porsche. Long stroke? Porsche was always about oversquare, short-stroke engines! Transverse inline six? Amazing.  –JT]

Of course, displacement adds up to a fairly small 2.5 liters, so power isn’t anything phenomenal. Figure 155 horsepower at 5,800 rpm, two fewer than a base-model 2002 Camry, and 20 fewer than a base-model 2002 Nissan Altima. Torque was decent but not groundbreaking, 177 lb-ft at a relatively peaky 4,000 rpm, and the whole thing was hitched to a four-speed ZF slushbox.

However, you know what an inline-six is really good at? Being smoother than custard and quieter than a slumbering kitten. Indeed, that powertrain smoothness was the Magnus’ USP, [Editor’s Note: I had to look that up. I thought it might be “Unusual Super Power” but alas, no. – JT] and Daewoo’s new owners must have seen something in the car because it was put into service in America as the Suzuki Verona. Looking at the Verona on paper, it’s a wonder how it wasn’t more appealing to American consumers. In 2004, you could get a Verona EX with automatic climate control, heated seats, more motorized gizmos than Inspector Gadget, a sunroof, and real leather seats for just $19,999. That’s a mere $124 more than a fairly basic 2004 Toyota Camry LE. It’s not like the top-trim Verona was made of particularly nasty stuff either. It had French-stitched leather door card inserts, genuine fake wood trim from the finest fake trees of the most exotic fake forests, and more soft-touch surfaces than a padded room.

Unsurprisingly, journalists lauded the Verona’s quality and appointments in period road tests. Frank Markus at Car and Driver noted tight assembly, writing “Uniform gaps surround the hood, the doors, and the trunk, and they’re noticeably narrower than those found on many domestic sedans.” Motor Trend said that “For a 20-grand vehicle, the interior materials are of amazing quality, with color, grain, and pattern matching that rivals luxury models.” I get that Mercedes was making some properly shit cars in 2004, but that’s still high praise. So, the Verona seems a well-built, well-equipped car. What are its downsides?

Remember that four-speed automatic I mentioned earlier? Coupled with the engine’s middling output and a curb weight of more than 3,400 pounds, it created a combination that ensured the Verona’s naught to 60 mph dash took more than ten seconds to complete. In addition, ride quality was reportedly on the soft side, so apex hunters would want to look elsewhere. Still, Motor Trend clocked the Verona at 60.1 mph through its slalom test which has to count for something, right? In all seriousness, judging the Verona on its sportiness is like judging a private jet by how easy it is to guide through a McDonald’s drive-thru.

Where the Verona really excelled was comfort. Motor Trend found that “this new Suzuki is tuned for ride comfort, easily swallowing road imperfections without jarring its occupants.” Motoring writer Richard Russell concurred, also writing that “In addition to the silky-smooth drivetrain, very little wind or road noise can be discerned at normal speeds.” So, less budget BMW and more cut-price Lexus. I don’t mind the sound of that.

In the end, Daewoo’s Hail Mary never found much mainstream success. The Suzuki Verona only lasted through end of production in 2006, and Suzuki never elected to bring the Magnus’ successor to America. Then again, maybe the writing was on the wall. Suzuki itself bowed out of the American car market in 2012, forever depriving us of such nifty vehicles as the Swift Sport hatchback and current Jimny SUV. Still, as a last-ditch attempt for Daewoo, the Magnus was an astonishing vehicle. So, if you’re seeking something with Porsche-assisted pedigree on a Kia Sephia budget, hop onto your preferred online classified ad site and look for a Suzuki Verona. While it certainly won’t sing notes like a 911 GT3 or even handle like a Cayenne, this surprisingly quirky car still sings of a future that never was.