This Rare Yamaha Motorcycle Hasn’t Run In Over 8 Years. I’m Going To Bring It Back To Life

Back in March 2019 I hitched up a U-Haul motorcycle trailer to one of my Smart Fortwos and drove north into Milwaukee. Deep in the cold Wisconsin city sat an orange 1972 Yamaha U7E. This little two-stroke answer to the Honda Super Cub found its way into my garage with the promise of a restoration project. I never got around to it, but that’s going to change. This motorcycle hasn’t run in over eight years, but I plan to finally ride it before the summer is out.

I got my motorcycle license in the spring of 2018 and wasted no time before collecting all kinds of old Japanese motorcycles. Almost all of them were what motorcyclists call UJM, or “Universal Japanese Motorcycle.” Japanese motorcycles of the 1970s and 1980s not only looked similar between brands, but their spec sheets were remarkably similar, too, hence the “universal.” Motorcycle.com says the term describes standard-class motorcycles, but it’s really far more expansive. Scooters and even underbone motorcycles had the UJM thing going on, too.

And for proof, look no further than my little steed on your screen.

No, this isn’t a Honda Super Cub, but it does look like one. This wonderful machine is the Yamaha U7E.

In 1958, Honda changed the world. This isn’t hyperbole; the company’s release of the Super Cub didn’t just change motorcycling, but it allowed millions of people to have a cheap and reliable form of transportation. As our friends at RideApart note, the Super Cub was the brainchild of Soichiro Honda and Honda co-founder Takeo Fujisawa. In 1956, the pair toured Europe and found themselves impressed with the scooters out there. Fujisawa saw a small motorcycle as part of Honda’s future, but it needed to be more rugged than what he’d seen in Europe.

Fujisawa set out to build the motorcycle for the common person, and with Honda’s engineering expertise created what would become the best-selling vehicle in the world.

Over 100 million examples have been produced and ridden by possibly billions of people of all sorts of social and economic statuses all over the world. Honda even created the shockingly successful “You meet the nicest people on a Honda” ad campaign to get people on the fence about motorcycling onto a Super Cub.

Thus, it’s no surprise that Honda’s competition wanted a slice of the pie. Yamaha was quick to follow in 1960 with the MF-1. Suzuki followed with its M30 and M31. The trio look alike, but Yamaha and Suzuki both put their own spin on the Honda formula. For example, in the beginning the Yamaha and Suzuki were two-strokes while the Honda was a four-stroke.

All three are underbone motorcycles. This design consists of a steel frame, sometimes tubular, with cosmetic fairings mounted to it. The frame rides low, allowing for easy mount and dismount for the rider. While not super common here in the States, you’ll find these motorcycles all over the developing world, and especially throughout Asia.

Honda, Suzuki, and Yamaha have used different names for their underbones through the years. Thankfully, enthusiasts have kept a good record of the Super Cub’s history. The same cannot be said for Yamaha’s effort. I found the most information by digging through Japanese sites.

The MF-1 became the MF-2 in 1962 with a bigger 55cc version called the MJ-2. Then, in 1965, Yamaha released another update. The company thought the then-latest update was big enough to deserve a whole new name. Yamaha launched a campaign that yielded 215,000 submissions for a new name. The new motorcycle got the name Mate.

So what is a Yamaha U7E?

If you search online you don’t find anything. Searching Japanese sites also won’t yield much information. As it turns out, I’ve had the answer to this question for over three years, but it flew right under my nose.

I got an original service manual with my U7E and I opened it for the very first time this week.

In its opening pages, Yamaha explains that the U7E was the latest in the Mate line. And looking at the frame and engine numbers, I found that the U7E shares its frame and engine with the Mate V70. The “E” in the U7E’s name refers to the motorcycle’s electric start system, something that was more novel back then.

According to my manual, production began in 1971 for the 1972 model year. And so far as I can tell, these were available for just a single year in America. I can’t believe that I had access to the questions so many have asked for three years and I just didn’t open the yellow book. I’ve asked Yamaha for more information. I’d love to know just how many of these there are in America, and why production was so short. 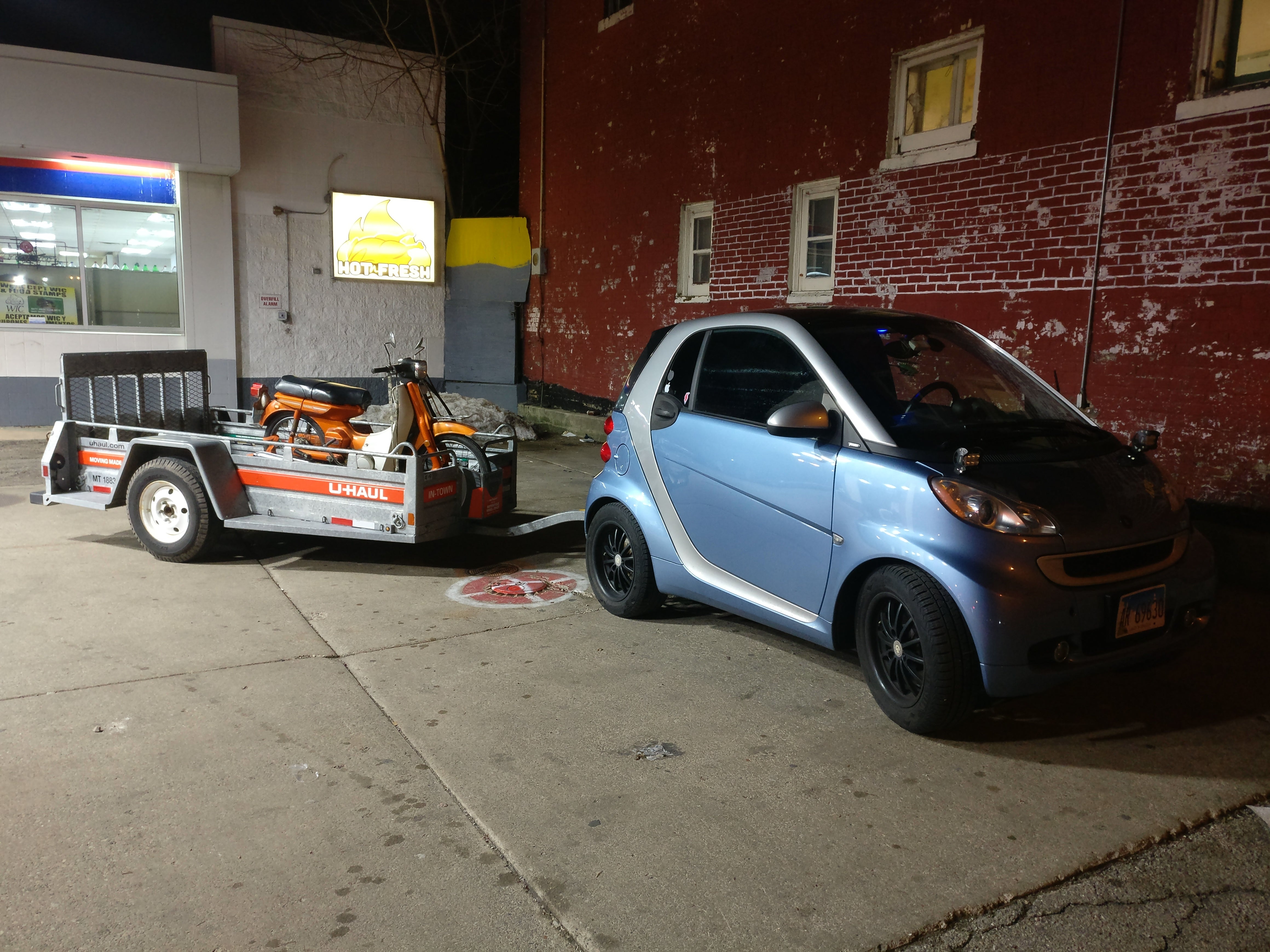 In 1972, it was purchased new from a Yamaha dealership in Wisconsin. Then, in 1976 it was sold to the previous owner, where it stayed in the family until I picked it up in 2019. It ran well for most of its years, teaching generations of the same family how to ride a motorcycle. The last time that it was registered was in 1986, as noted by these beautiful vintage plates.

The title that I have is the original that was issued to the family in 1976.

It was last serviced in 2014, where the motorcycle shop fitted a new carb and fixed the wiring for the motorcycle’s lights. Sadly, it wasn’t ridden after and eventually stopped running that year. The previous owner never bothered to get it back on the road. I didn’t touch it, either, and instead bought a working, but far uglier U7E that I maybe kept for a few months.

At minimum, it will need a good carb cleaning and a throttle cable to get back to life. The tank was drained, so it’s pretty clean in there. The transmission–a nifty semi-automatic where you just shift, no clutch lever–seems to work great and the engine does appear to have compression.

But what I really want to do is give it a good refreshing.

It’ll definitely need newer suspension components and the mudguard is trashed. Thankfully, not only do I have a huge box of parts (including a new mudguard in the correct color), but I also have a service manual and a parts list. In theory, I have most of the parts to get this back on the road.

The rest will require some elbow grease.

I don’t plan for this to be a full restore, but just enough for it to look pretty while having just the right amount of original parts. I kick this restoration off next week and so long as nothing gets in my way, you’ll see weekly updates in seeing this little guy coming back to life!

Mercedes is a lifelong fan of all things powered by an engine. When she isn't driving one of her five Smart Fortwos or her 14 other vehicles she could be found in the cockpit of a Cessna 172 or perhaps swimming in any body of water that she could find. She also has a deep love for buses of all kinds. Please send her buses. mercedes@theautopian.com Instagram: @mistymotors Twitter: @Miss_Mercedes30 Facebook.com/neonspinnazz
Read All My Posts »
PrevPreviousBe Careful What You Wish For: V8 Manual Step Van vs V8 Manual… Um… Well…
NextHouston, We Have A Big Gas ProblemNext