Be Careful What You Wish For: V8 Manual Step Van vs V8 Manual… Um… Well…

Good morning, Autopians! It’s time for another Shitbox Showdown. Today, we’re making wishes come true with not one, but two vehicles with eight cylinders and three pedals. But before we do that, let’s check in on yesterday’s automatic GTs:

Honestly, I feel like this one could have gone either way, and if pressed, I’d have a hard time choosing between them myself. But that 300ZX is too nice to ruin, and I know and love the VG30E, having owned a 365,000-mile Pathfinder with one in it. I think you all made the right choice. A few commenters wanted to manual-swap it, but if it were me, I’d leave it as an automatic.

Which brings us to today.

Anyone who has read stories of genies granting wishes, or played a Dungeons & Dragons game with a really creatively evil DM, knows that it never goes quite the way you expect. Often the letter of the wish is granted, but not necessarily the spirit.

It seems like every time we have a rear-wheel-drive vehicle that has either a six-cylinder or an automatic, the comments go something like, “It’s cool, but I wish it were a V8.” Or “I like it, but I wish it were a manual.” Well, I’m happy to report that today, you all rubbed the magic B12 Chemtool bottle, and a shitbox-wish-granting genie popped out. You wish you could have a V8 with a manual in our price range?

Your wish is my command. Heh heh heh. 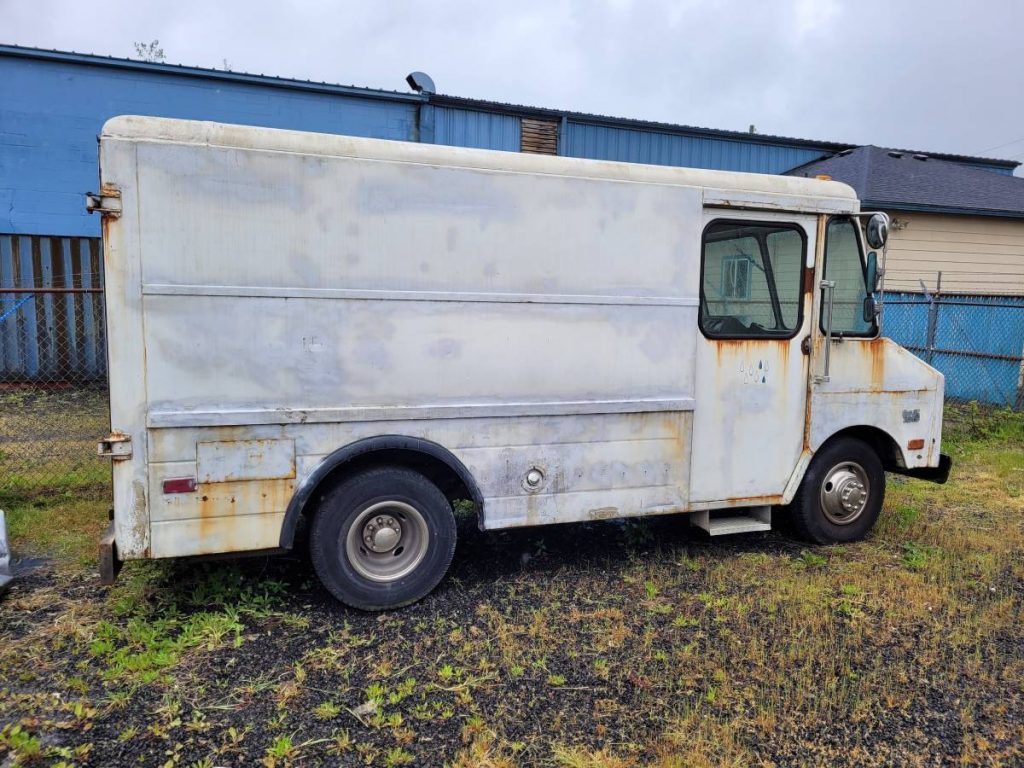 Runs/drives? Starts, but threw a rod

This was actually supposed to be something even more evil: a Mustang II with a factory V8 and a 4 speed stick. But it sold between me uploading the photos and beginning to write. Lousy timing. But as evil choices go, I think this old van will do nicely. 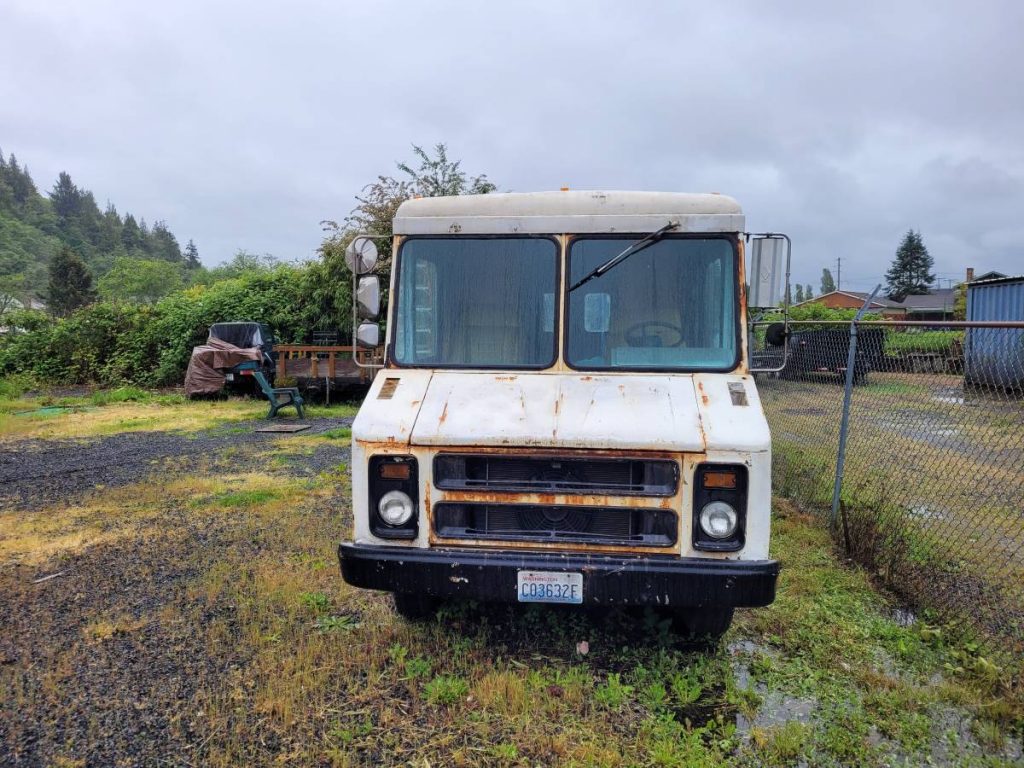 Chevy/GMC Step Vans, or P-series vans in GM-speak, are the ultimate expression of form following function. It’s a self-propelled box for carrying stuff around. That’s it. Incredibly useful, utterly uncompromising, and dead simple. This one-ton van looks like it has earned its keep for a long time, and probably over several iterations, judging by the hodgepodge of shelves and racks in the back. 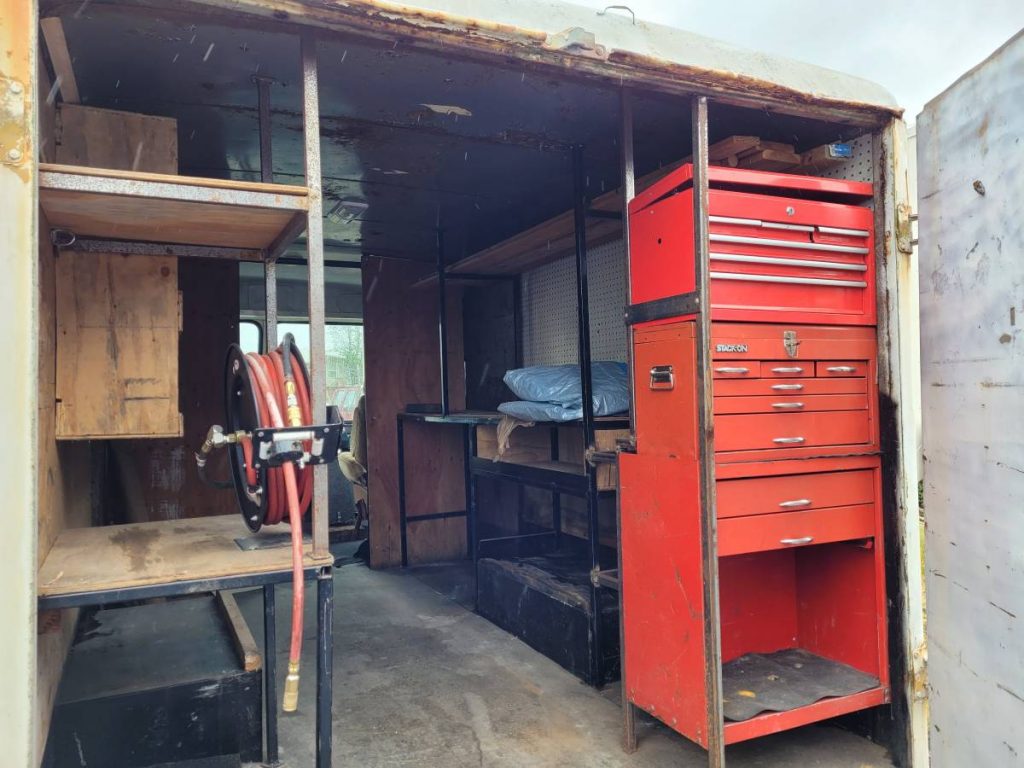 Its race may not yet be run, but it will need a little help before the last lap. Its small-block 350 V8 “sounds like it has thrown a rod,” according to the seller. But these engines are only slightly less common than sand at a beach, so finding a replacement should be easy enough. The rest of the mechanics, including what’s likely an SM465 four-speed manual, are said to be in fine shape. 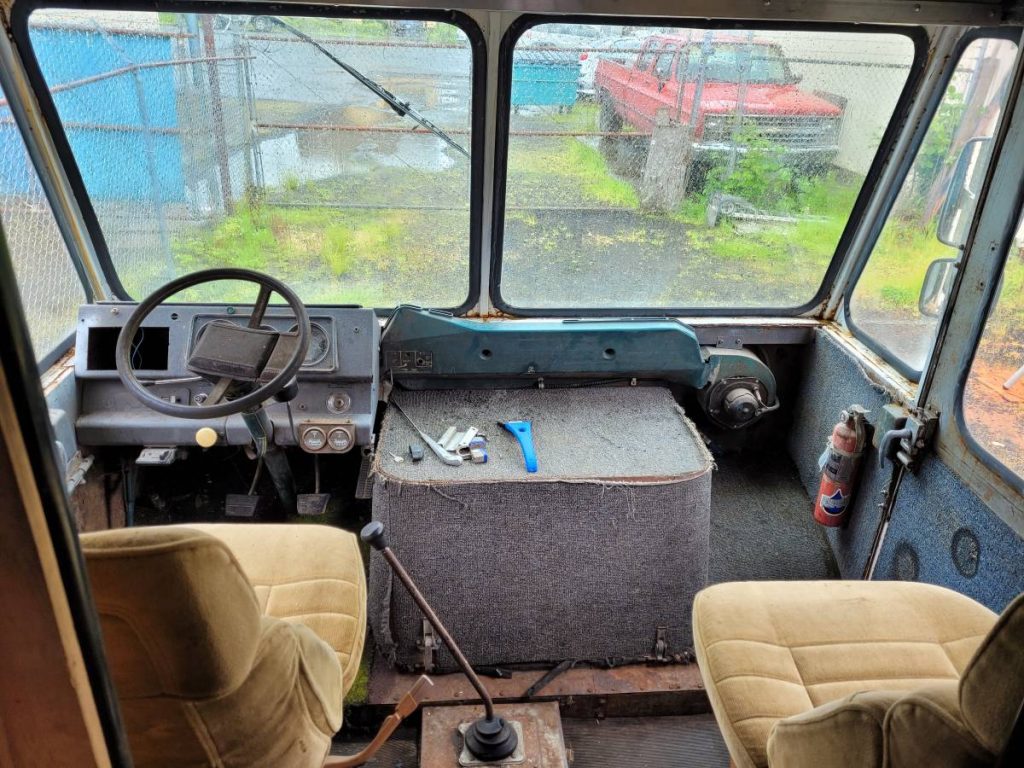 If you don’t need a work van, I suppose this could make a viable camper candidate, or food truck maybe? It wouldn’t be the first retired Step Van to find a second life slinging burritos.

Not your speed? Well, let’s take a look at what’s behind door number two: 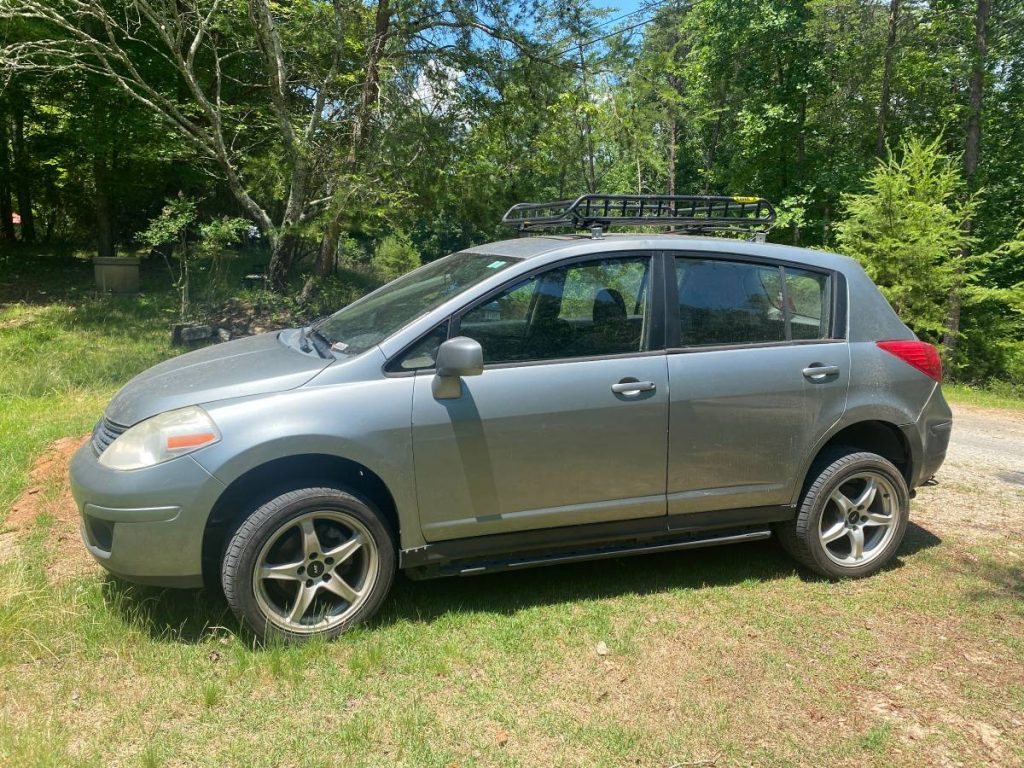 I don’t know how this all came about, but I imagine it required at least these four ingredients: a Nissan Versa with a bad engine or transmission, a Mustang convertible that was most likely rolled, a Harbor Freight welder, and copious amounts of cheap beer. Somehow, those ingredients, when combined in the right way and baked in the hot Georgia sun, coalesced into something that not only runs and drives, but is almost kinda-sorta brilliant. 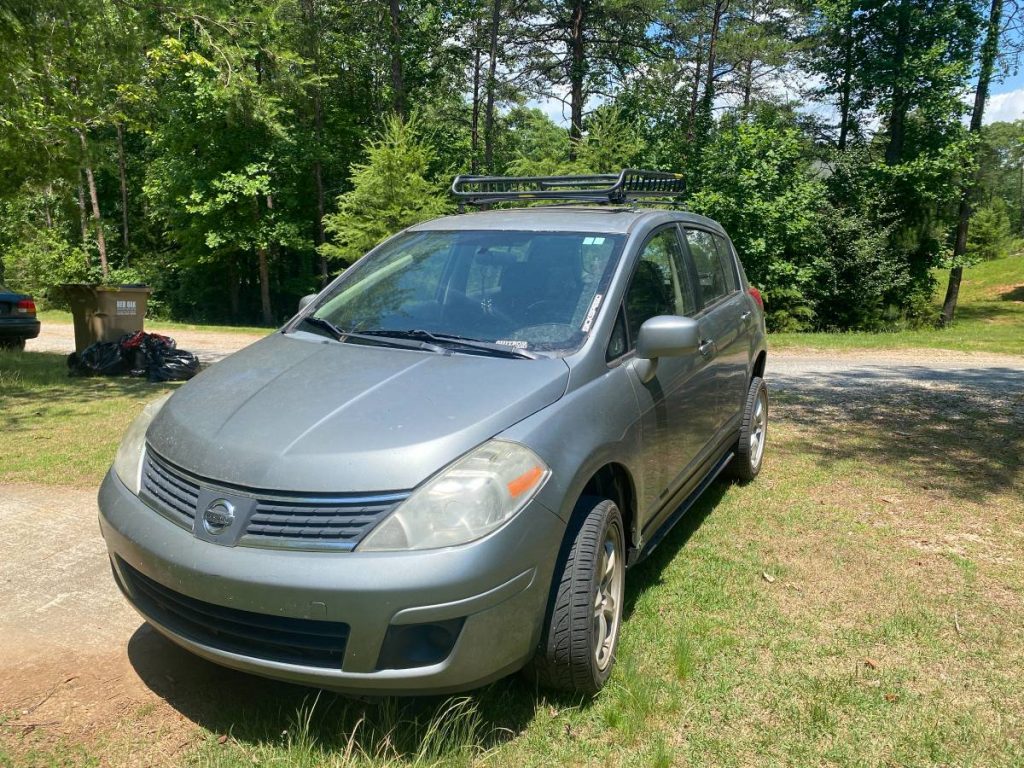 It’s obviously a half-baked idea, and it could have been done better, but look how well the wheelbase and width matched up! It’s almost like these two cars wanted to be melded into… whatever this is.

Out of curiosity, I looked up the dimensions of the two:

Close enough for government work. Or a couple of guys in a back yard. 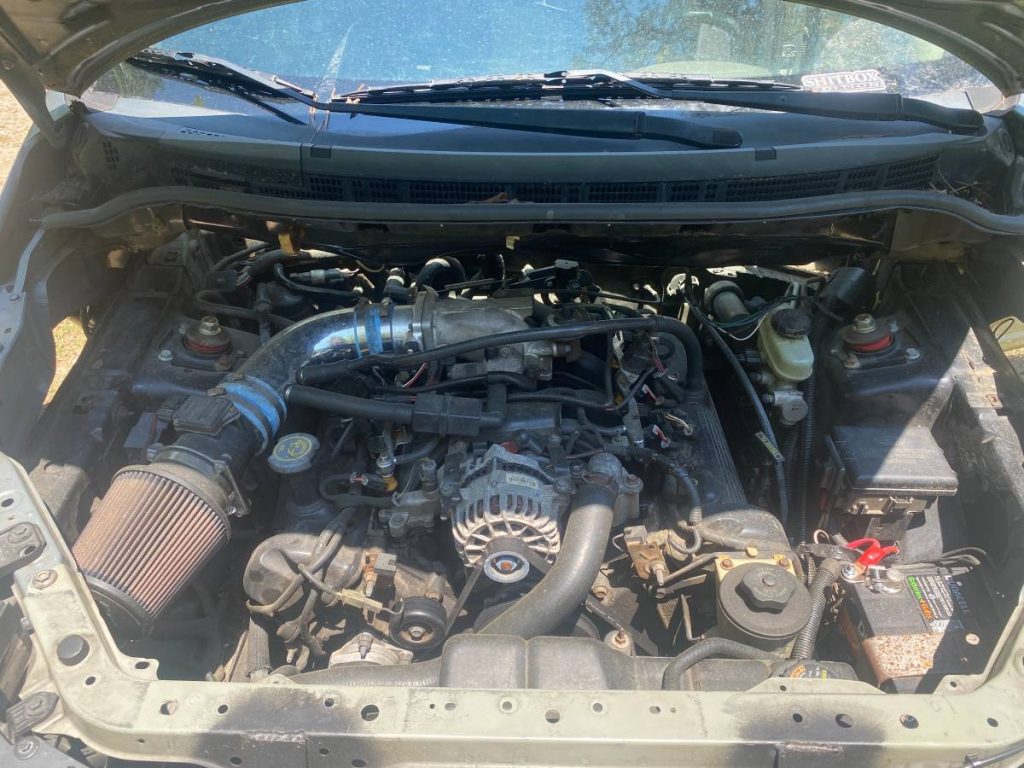 Obviously, those two dimensions aren’t the only two that matter, as evidenced by the awkward position of the engine and dashboard in relation to the Nissan body. Visibility is clearly an issue; sitting in the driver’s seat, you must be staring right at that buklhead at the base of the windshield. 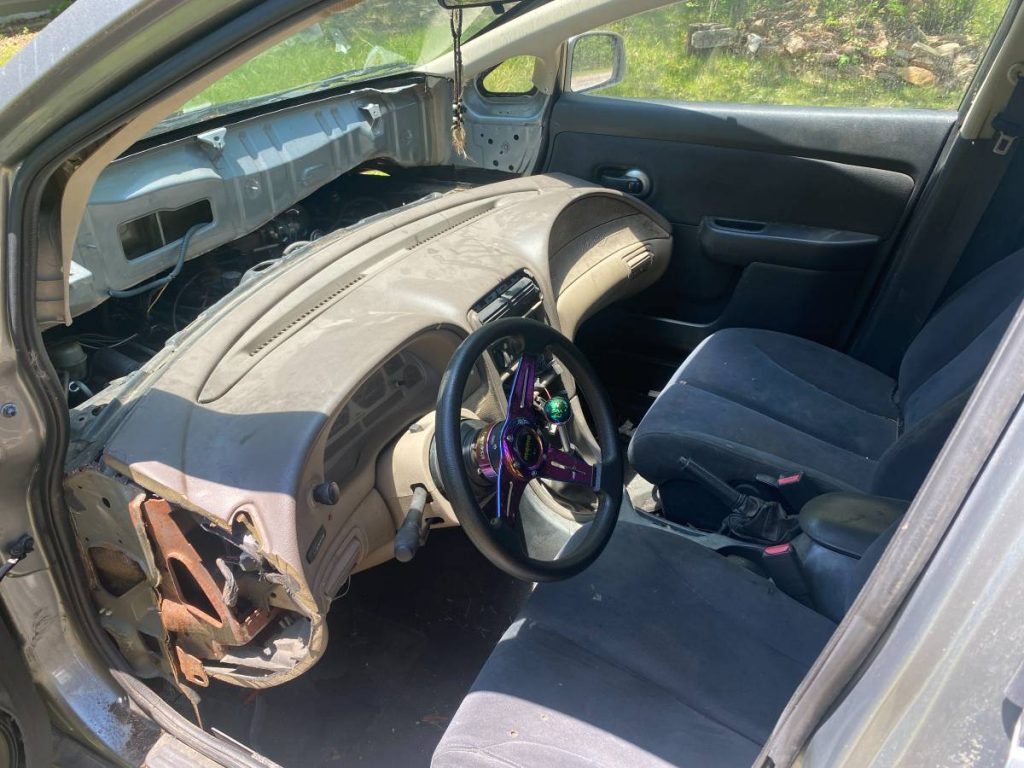 But with a little more development time (read: another twelve-pack), who knows what could happen? Probably nothing good, but it might be fun to find out.

What really astonishes me about this ad is that the seller says the work was done “not by me.” That means they acquired this bizarre chimaera as it sits. How exactly did that come about, I wonder? Did money change hands? Or was a bet won, or lost?

Anyway, there they are. Two V8-powered, manual-equipped vehicles, as requested. One’s dying and the other is probably a deathtrap, but both do fulfill the requirements. Choose wisely.