Good morning! For this Two-Door Tuesday edition of Shitbox Showdown, we have two seemingly-unrelated cars that have one thing in common: Lido. And I don’t mean Boz Scaggs’s musical protagonist. But we’ll get to those in a minute; first let’s circle back to yesterday’s wagons:

So a busted V8 beats a rattle-canned runner. And thanks to the commenter who told us the Focus used to be a delivery vehicle for a Mexican restaurant, although as others pointed out, the yellow is wrong if that’s the case. Maybe the hardware store was out of white paint, or something.

Now: Former Ford and later Chrysler boss Lido A. “Lee” Iacocca needs no introduction. He was an industry giant, with a keen sense of the market, and his instincts were rarely wrong. He is best remembered, of course, for the Mustang and the minivan, but as any minor-league ball player will tell you, two home runs do not a career make. Today, we’re going to take a look at a couple of good solid base hits, one from his years at Ford, and one from his tenure at Chrysler, and see which one you prefer. Here they are. 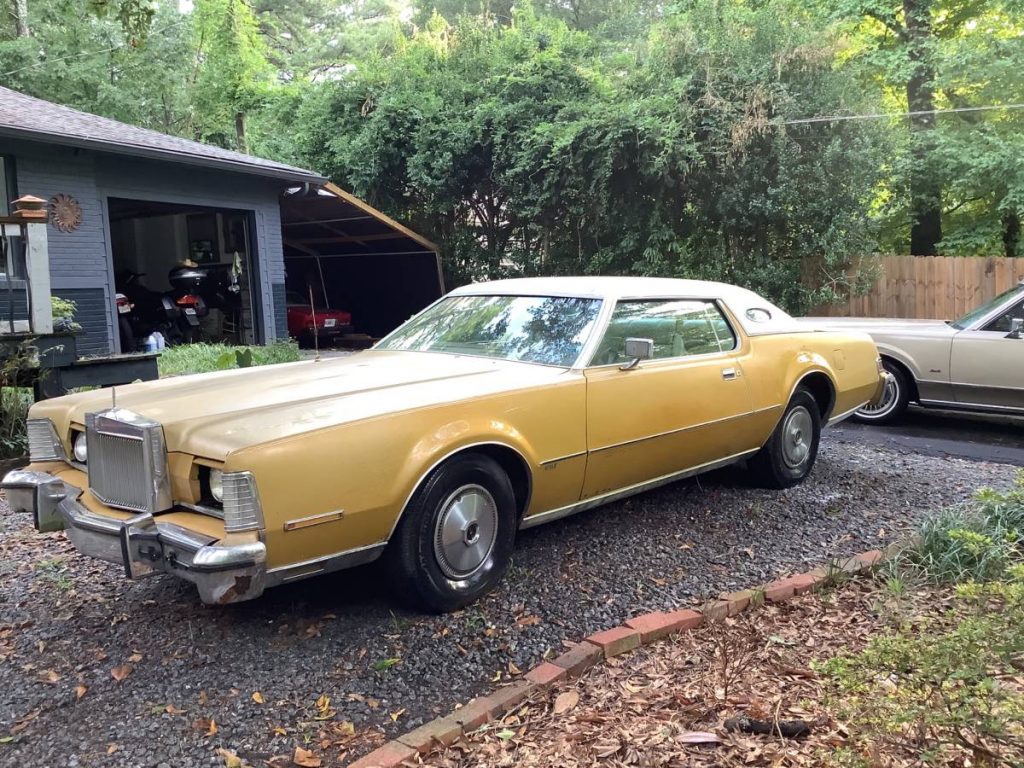 Hot on the heels of the Mustang’s success as a “secretary’s car,” Iacocca directed Ford’s designers to create a car for their bosses. The Continental Mark III was created as a successor to the Mark II from ten years earlier, sold only as a two-door, to compete with Cadillac’s Eldorado. The idea worked well enough that Lincoln continued on with the Mark IV, V, VI, VII, and VIII. 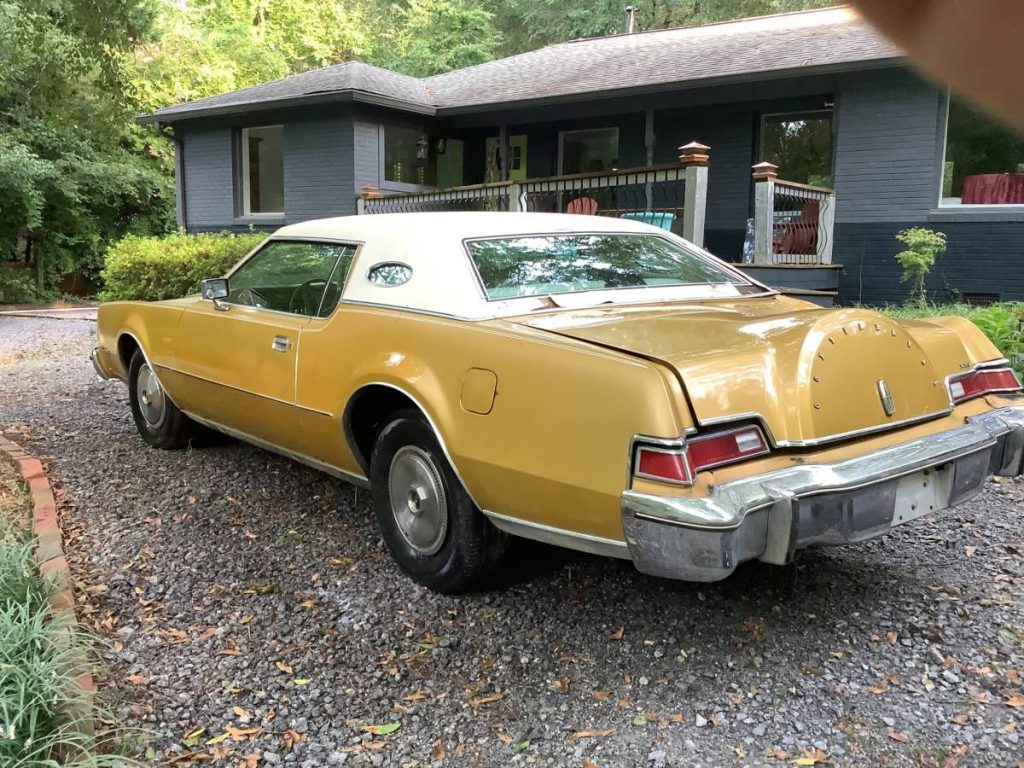 This car, the Mark IV, wasn’t the biggest (that was its successor) or the most powerful (that was its predecessor) of the line, but at nineteen feet long and seven and a half feet wide, it cut quite an imposing figure on the road. Power came from a 460 cubic inch V8 with a four-barrel carburetor. Even though it’s pre-catalytic-convertor, this engine in the Mark IV puts out only 212 horsepower. It’s not a fast car. But in 1974, if you were driving a brand new Lincoln, you were never in a hurry. They were all waiting for you. 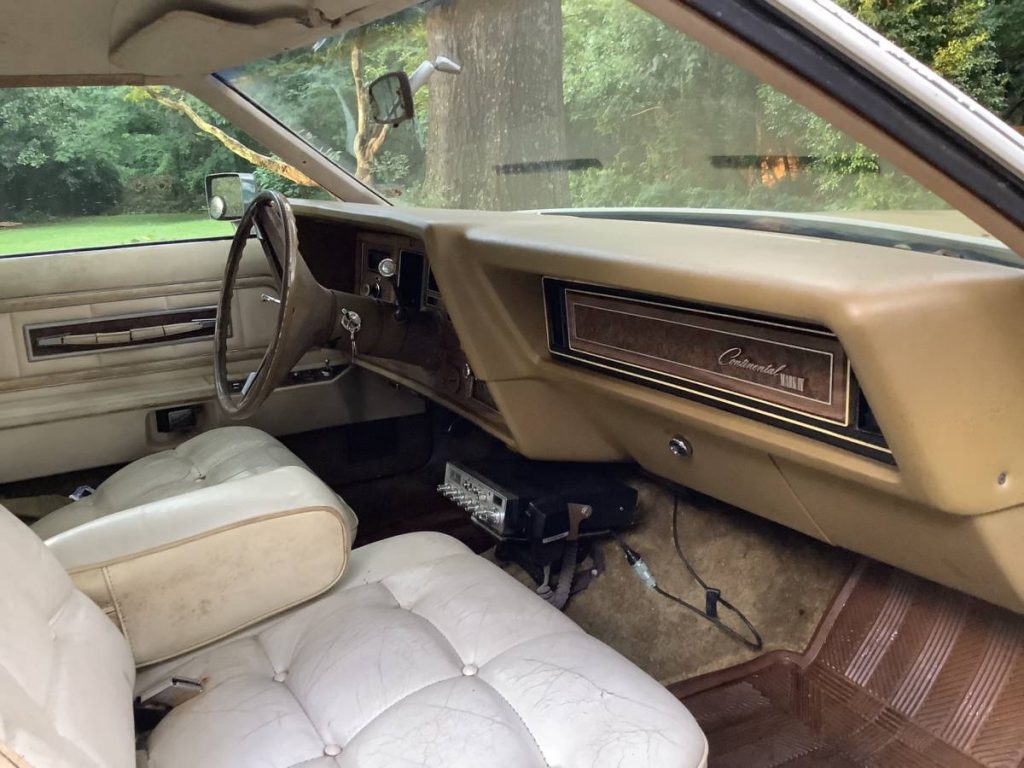 Inside, the big Lincoln is soft and inviting; when this car was built, luxury meant comfort and quality, not gadgets and bric-a-brac. (Okay, fine; a little bric-a-brac too.) It’s not in perfect shape, but it does look mighty comfy.

Sadly, there is one area where this car isn’t quite so nice: 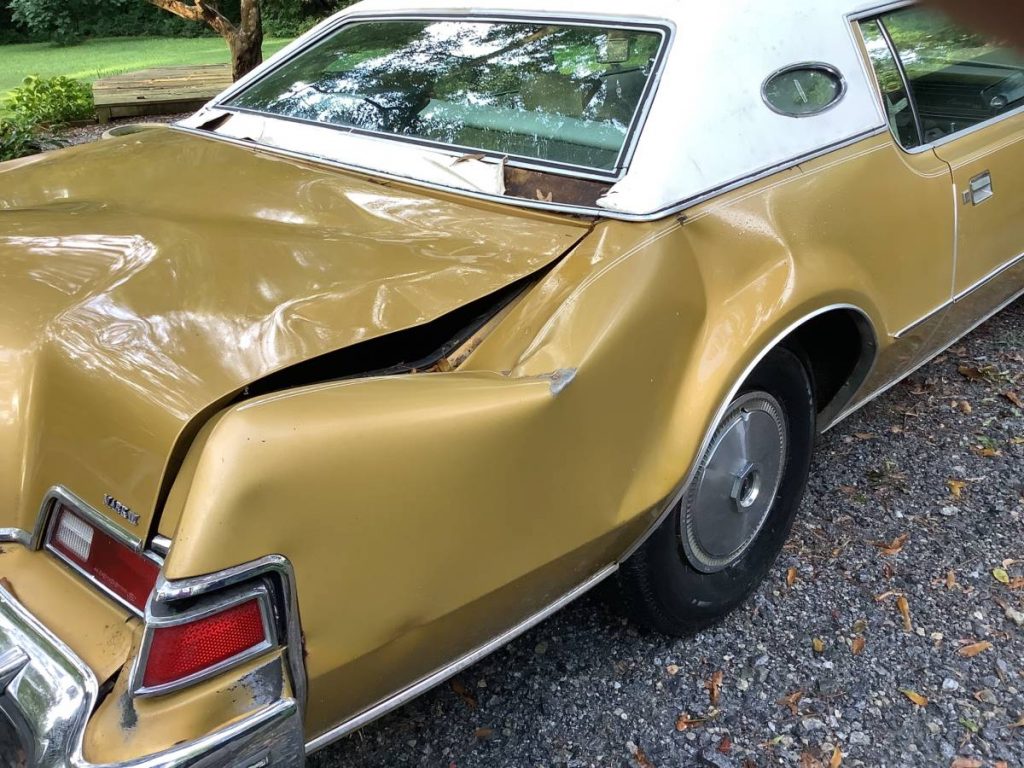 I don’t know what it did to piss off a tree, but it lost a fight with a falling branch. That one won’t buff out, and it’s not really a valuable enough car to make it worth fixing. The seller says it runs fine, but it’s being sold as a parts car just because of the body damage. I imagine that if you want, you could employ the BFH method and get it to the point where the trunk lid would at least close properly, and just drive it like that. 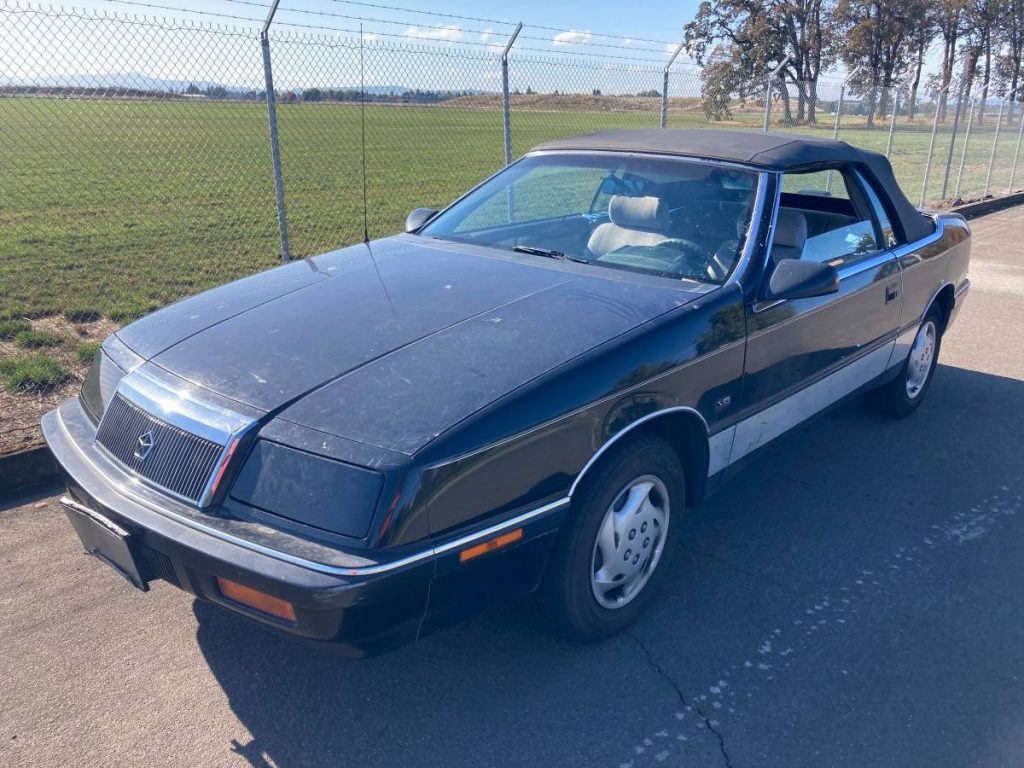 Runs/drives? “Amazing,” according to the ad

After getting fired by Ford, Iacocca landed at Chrysler, where he gutted and rewired the company from the inside out, got a government loan to get Chrysler back on its feet, and introduced a whole new kind of car for Chrysler: the K-car. The strategy worked brilliantly, but Iacocca soon recognized one problem – the K-car was sturdy, no-nonsense, and about as interesting as watching paint dry. To make it more exciting, in 1982, he employed a trick well-known to bar owners and B-movie producers everywhere: he took its top off. 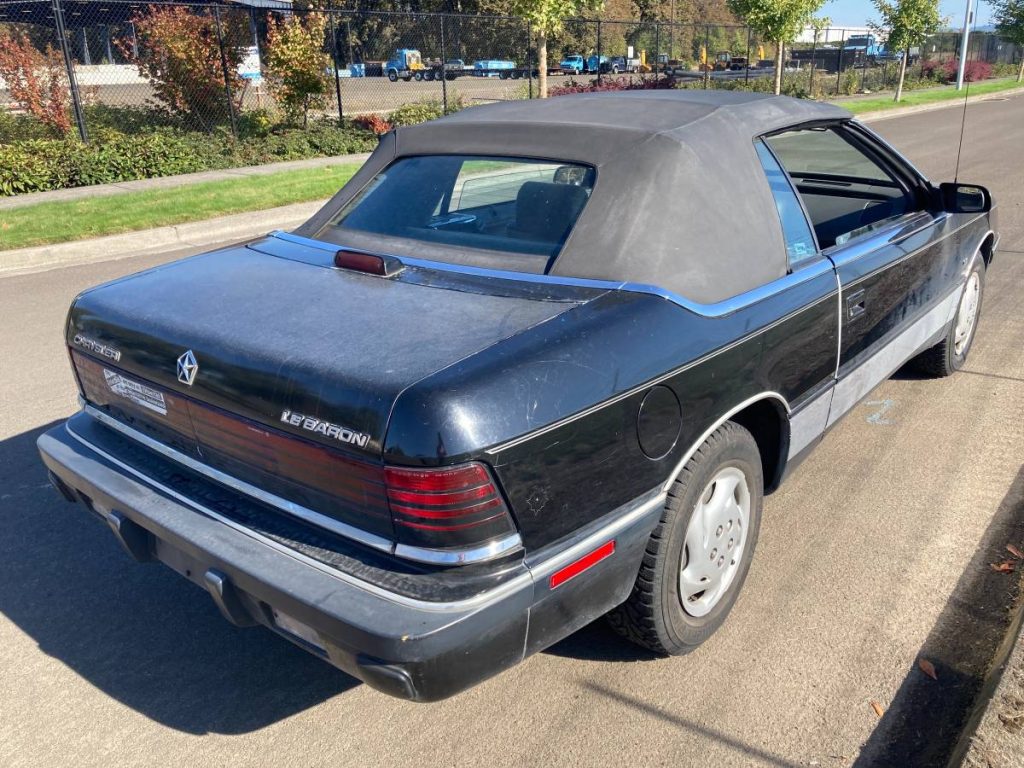 It had been six long years since any American automaker had offered a convertible, and the imports that were available were all pretty old designs, like the Mercedes R107. Buyers gobbled up the new Chrysler LeBaron and Dodge 400 convertibles. Chalk another one up for Lee. A second generation of LeBaron convertible followed, and three generations of Sebring convertibles followed that. 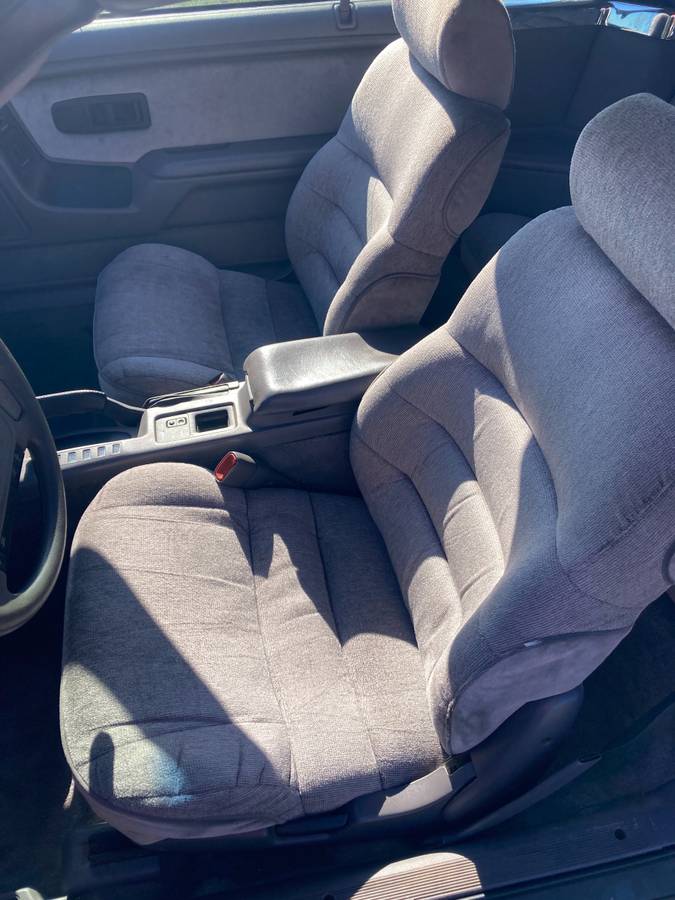 This second-generation LeBaron convertible has a scant 76,000 miles on its odometer. The ad claims it was “granny-owned” and “garage kept,” but from the dust, it looks like Granny didn’t get out much. I have a feeling this car sat for a while. It’s being sold by a dealership, and they claim the photos are pre-detailing; if it were me, I’d have waited to take photos until it was clean, but what do I know? 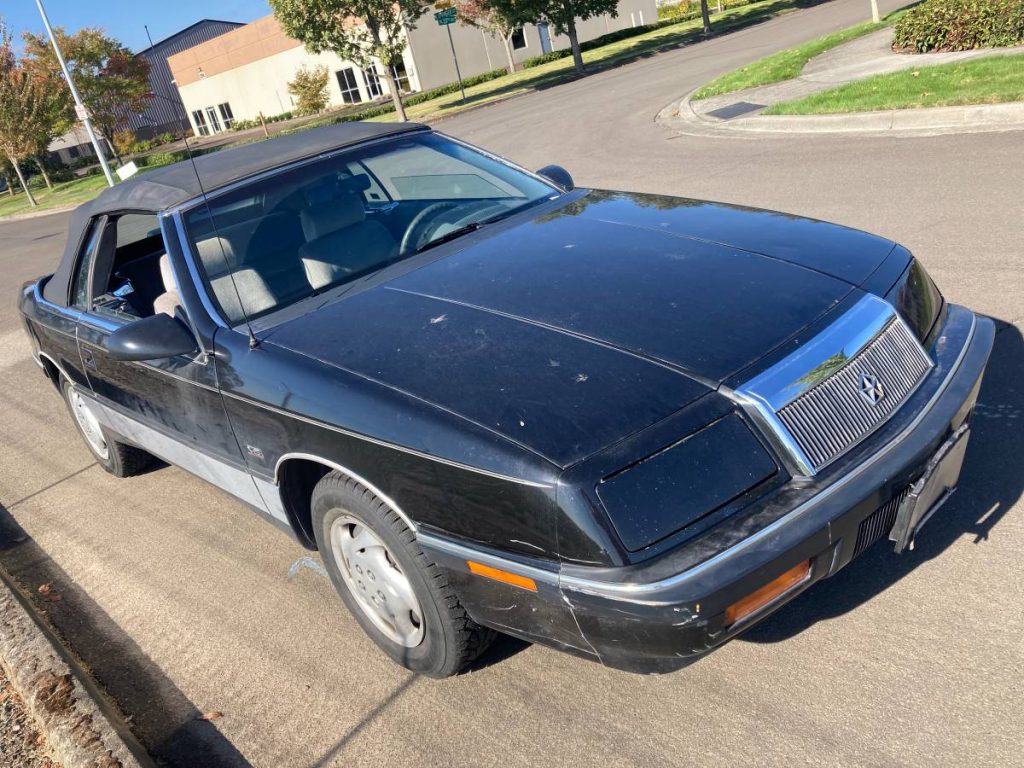 This LeBaron is powered by a Mitsubishi-built 3 liter V6 and a four-speed “Ultradrive” automatic transmission. The Ultradrive was troublesome in its early days, largely due to improper maintenance, so let’s hope Granny’s mechanic knew what they were doing. With the low mileage, there shouldn’t be too much damage done by deferred maintenance, but a good thorough check is a good idea.

Well, there you have it. Two lesser success stories from an industry titan, one with some damage, and the other in need of getting some cobwebs blown out. Which one is your style?