Back in September, I went to the RV Open House in Indiana to see the coolest campers on sale right now. Somehow, I’m still not done showing you all of the cool stuff, and I have one more for you. The Winnebago Hike 100 is a cute little off-road camper with some good ideas. And it’s perfect for a couple wanting to get out and explore.

When I went to the RV Open House, I found a common theme among the manufacturers at the event. Just about every company wants to sell you a travel trailer with a lift kit and all-terrain tires. These trailers are marketed towards people who want to go camping where there are no RV hookups and where your pool is the river that you park next to. Some of these trailers appeared to be better than others. Something like a Taxa Outdoors trailer or a Mission Overland trailer are specifically designed to get roughed up in the woods. On the other hand, a lifted Little Guy Trailer might have a bad day if you get too far off of the beaten path. Winnebago is also offering customers an off-road travel trailer, and this one sort of mixes the two ideas together. The Hike 100 is bigger and roomier than a typical off-road camper, but not just a regular camper essentially on stilts. Check it out. 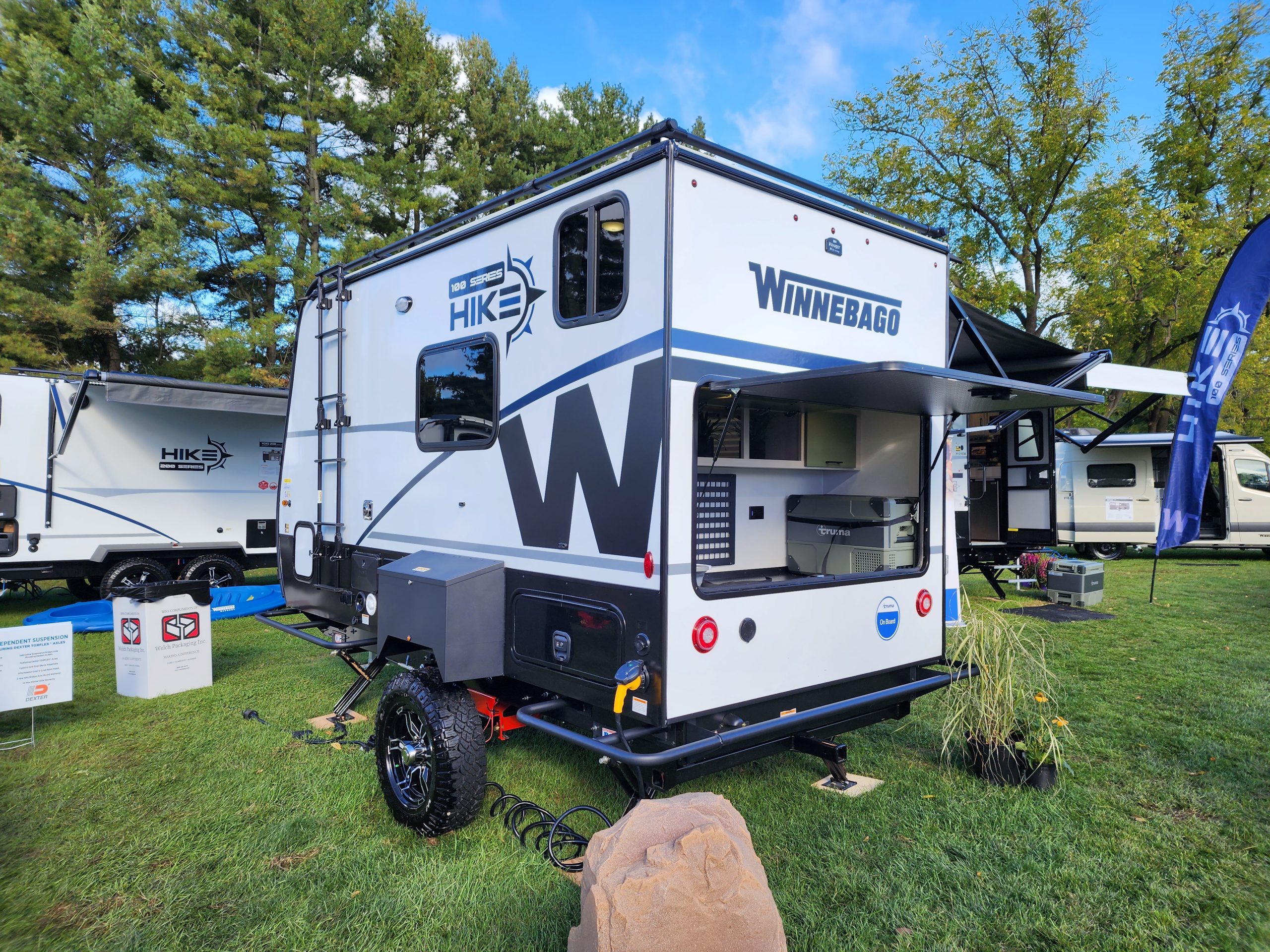 The first thing that you’ll notice about the Winnebago Hike 100 is that it’s tiny! This trailer measures in at just one inch under 16 feet. That makes it short enough to be easy to tow, and short enough that you shouldn’t get it hung up on a tree or high-sided while taking it down a trail. It’s also just an inch under 10-feet-tall. While that means you aren’t getting this into your garage, it does mean that you’re getting 6 feet, 5 inches of room in the interior. That will make things cramped for some people, and quite roomy for others.

Before I move inside, we have to talk about this exterior. The body is covered in steel panels with brush guards. Winnebago tells me that this should protect the trailer off-road, provided that you aren’t too crazy. The panels will easily take rocks kicked up from the tow vehicle and even small brushes with nature. And the brush guard tubes can protect the trailer if you make a small oopsie, like turning a corner a touch too sharp. While I haven’t been able to test this trailer, the tubes do seem substantial enough to protect the trailer from light hits; stuff that would normally rip up an unprotected trailer wall. 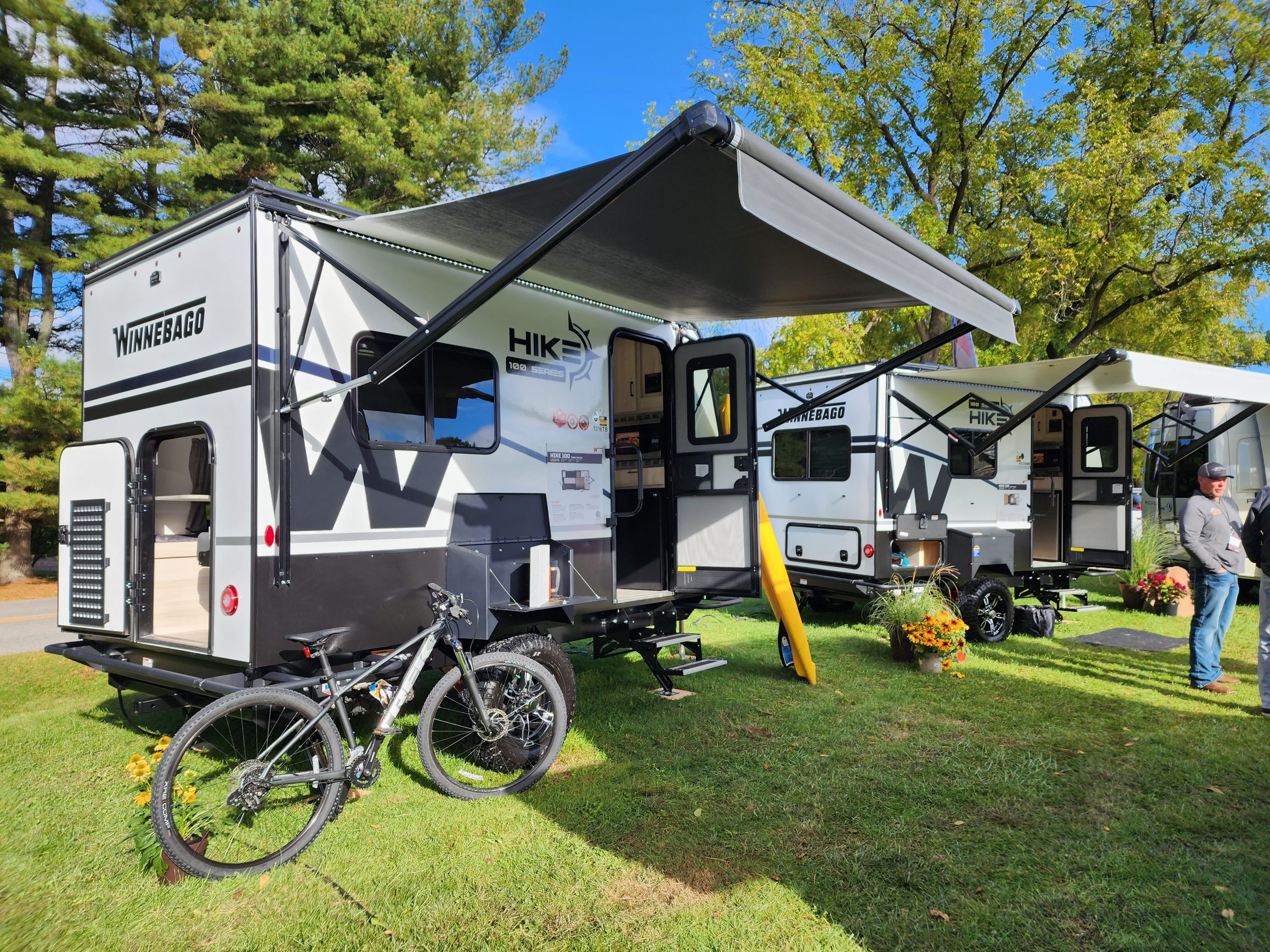 One of the selling points of the Hike 100 is its exoskeleton. Winnebago’s people tell me that the bars running up the trailer from the tongue to the roof are great for attaching your gear. The company’s targeting the kinds of people who want to plant their stabilizers down then detach gear to go out and have fun. Winnebago expects customers to mount surfboards, bicycles, canoes, and just about anything else that will fit. Each Hike 100 even comes with a two-inch hitch receiver, so you could even carry a small motorcycle with you if you want.

Another trick feature is right under the trailer. If you threw a dart at a wall with pictures of travel trailers on it, chances are your dart will hit a camper equipped with a torsion axle (Dexter’s “Torflex” is shown above as an example). Now, for most trailers torsion axles are just fine! As Ask An RV Engineer writes, torsion axles allow a trailer to have a smooth ride, while offering easy installation and low maintenance. The most of your maintenance with a torsion trailer axle is keeping your bearings in check.

BAL believes the solution is a suspension that won’t break in the first place, and thus, it developed a new type of torsion axle suspension that the Hike 100 uses. BAL calls it the Independent Suspension Bridge Axle Mounting System, and the headlining feature is the big red “suspension bridge” mounting point. 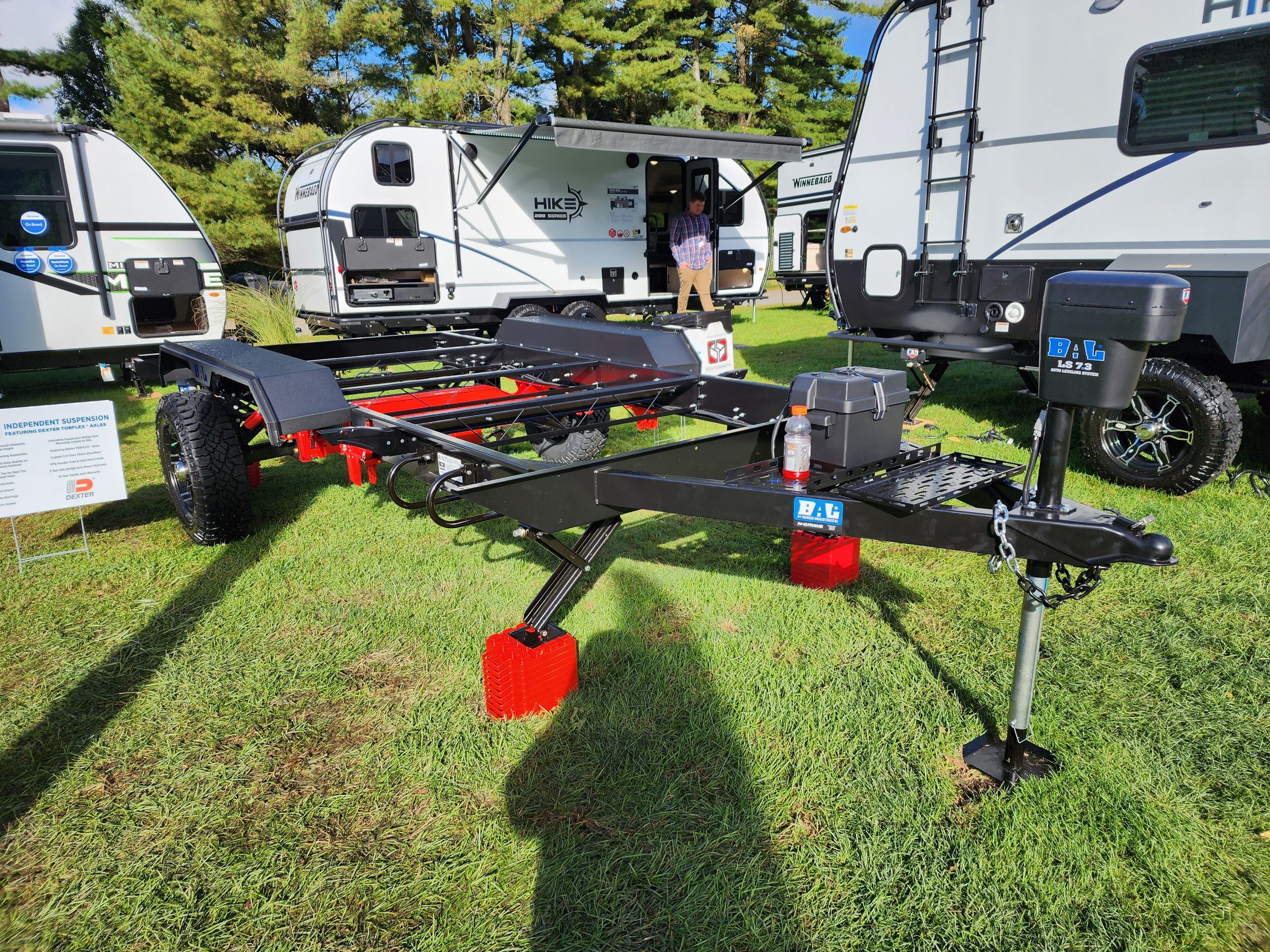 Normally a torsion axle travels the length between each side. What BAL did here was cut the torsion axles short to small stubs, then place a heavy steel mount between them. BAL’s representative told me that this suspension setup was torture tested at a proving grounds, where they subjected it to thousands of miles of abuse testing. Even when they threw the axle into a tree stump it wouldn’t break or bend.

BAL says that in addition to additional strength, its axle mounting system allows for a higher ground clearance since there isn’t a big torsion axle hanging low. Another difference you’ll find is that BAL is using external-mounted coil over shock absorbers. The representative told me that BAL’s engineers did this both to keep the trailer level on the trails, but also because it looks cool. Alright, I do love how they look. 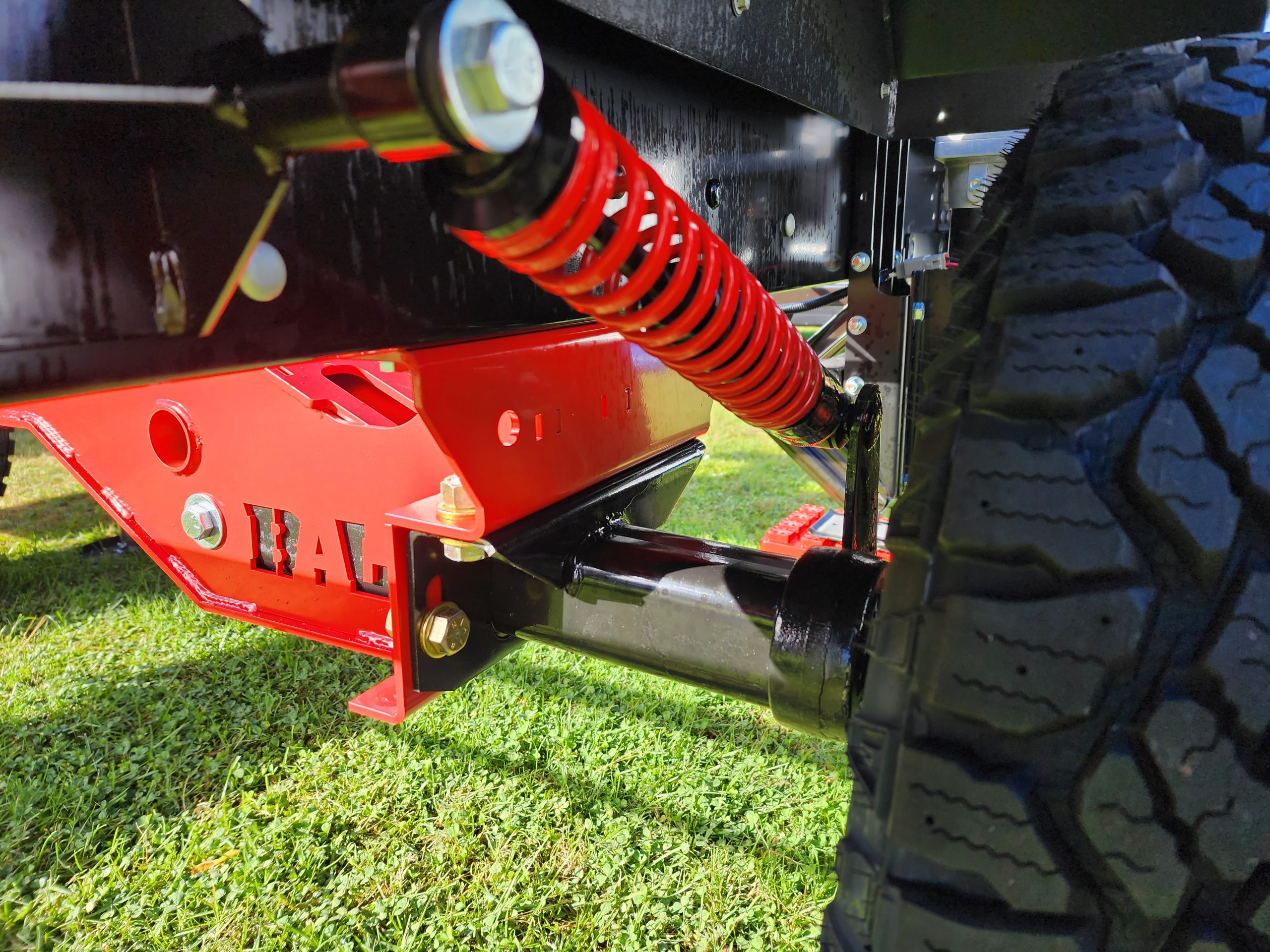 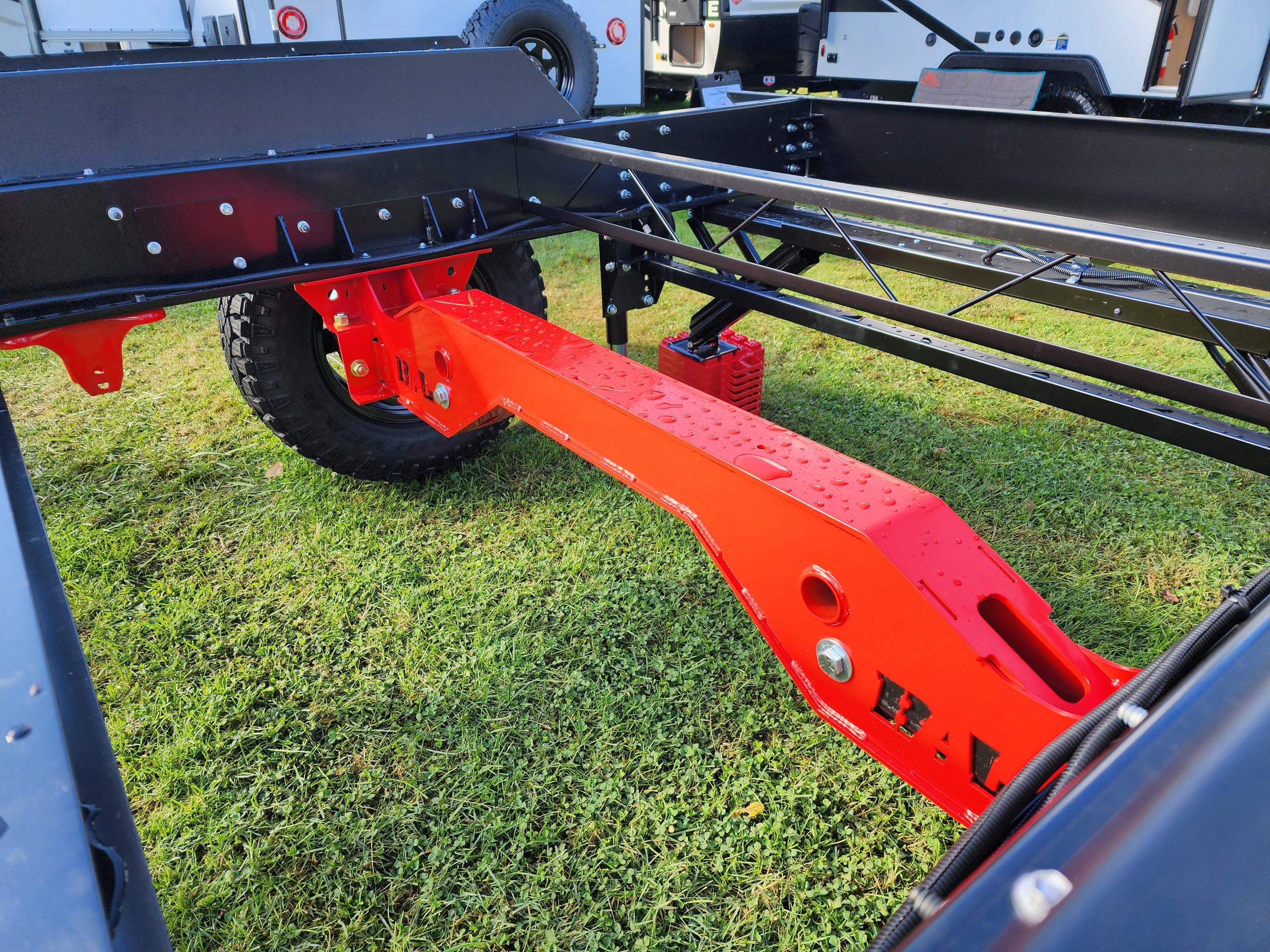 Weirdly, despite touting this as an off-road-capable trailer, Winnebago has not published ground clearance. Perhaps foolishly, I expected to find the ground clearance published in the trailer’s information guide, so I didn’t measure it myself. What I can say is that it’s certainly quite tall. Here’s Winnebago’s promotional image showing the Hike 100 being towed, and that one didn’t even have the newer suspension. The closest actually available number is hitch height, which is 28 inches.

Heading inside, the camper’s interior is dominated by bedding. Winnebago sells a few different floorplans, and your end goal sort of determines which one you get. 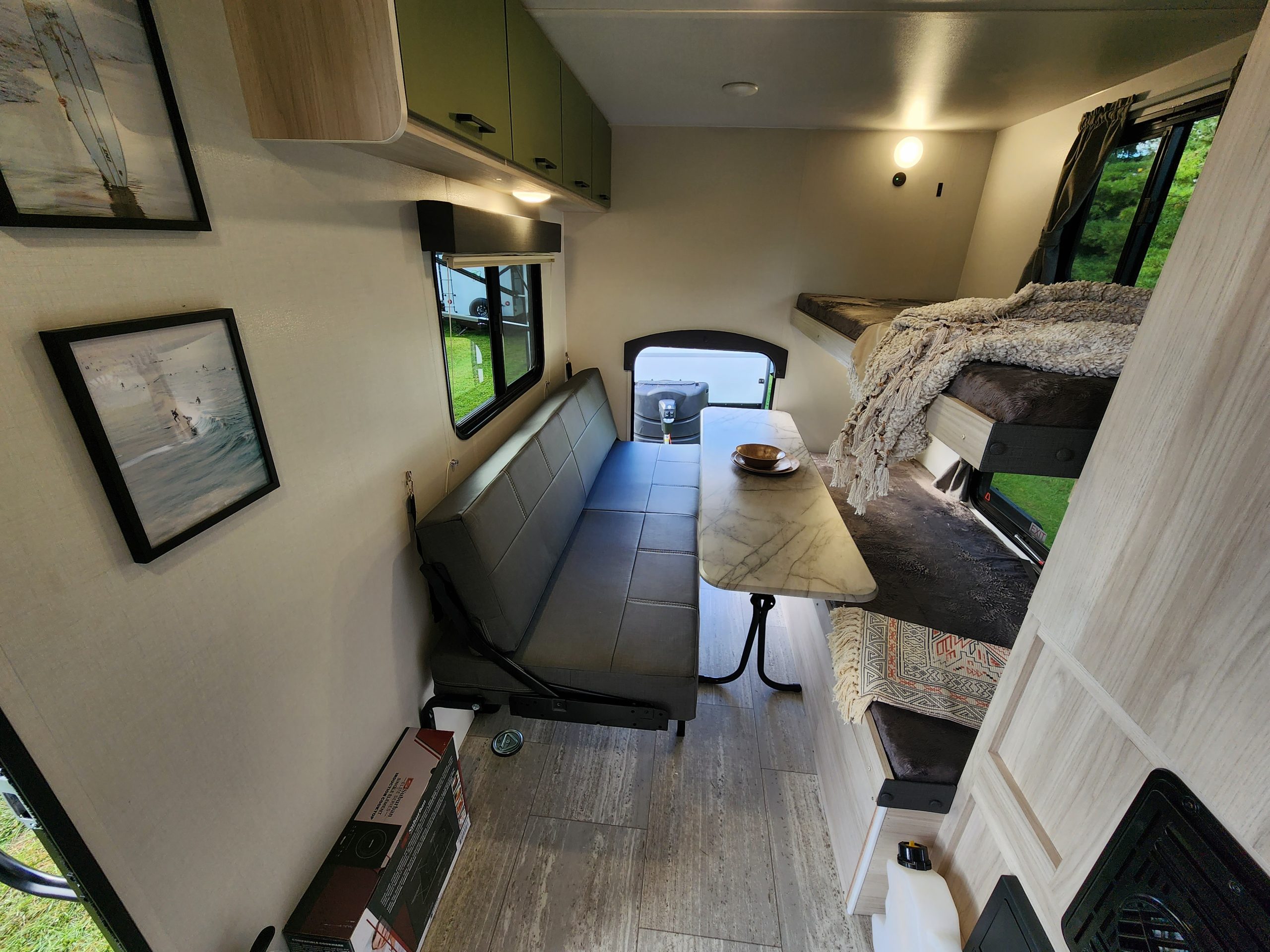 The rest of the camper consists of a galley kitchen and a small wet bathroom. Honestly, no matter which floorplan you choose, I feel like it is really best for just two people. The interior would get cramped really quickly with three or four people, even if the only time you’re in this trailer is to sleep in it. And that’s fine! I’d love to take a camper like this out on a trip with Sheryl. 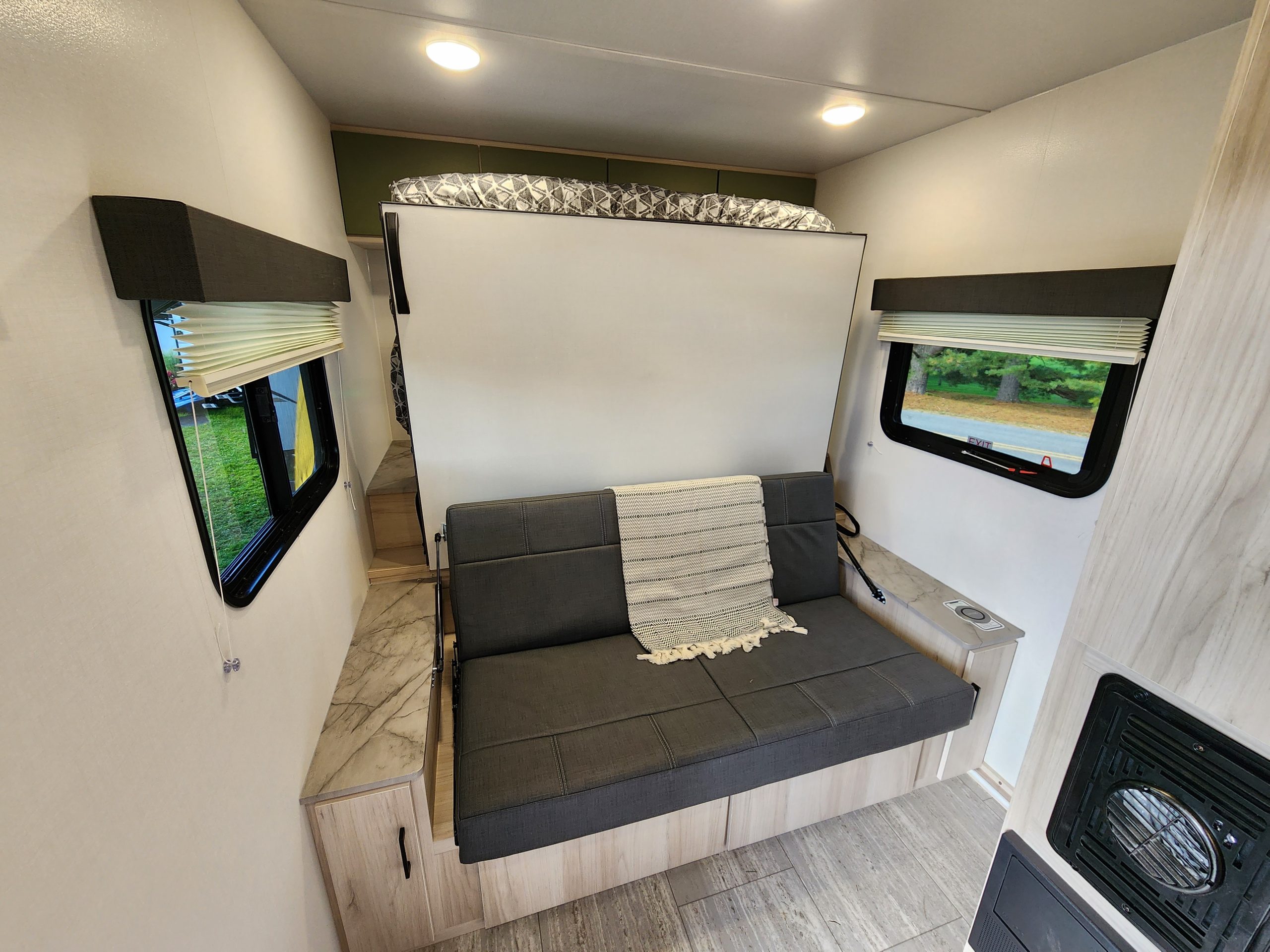 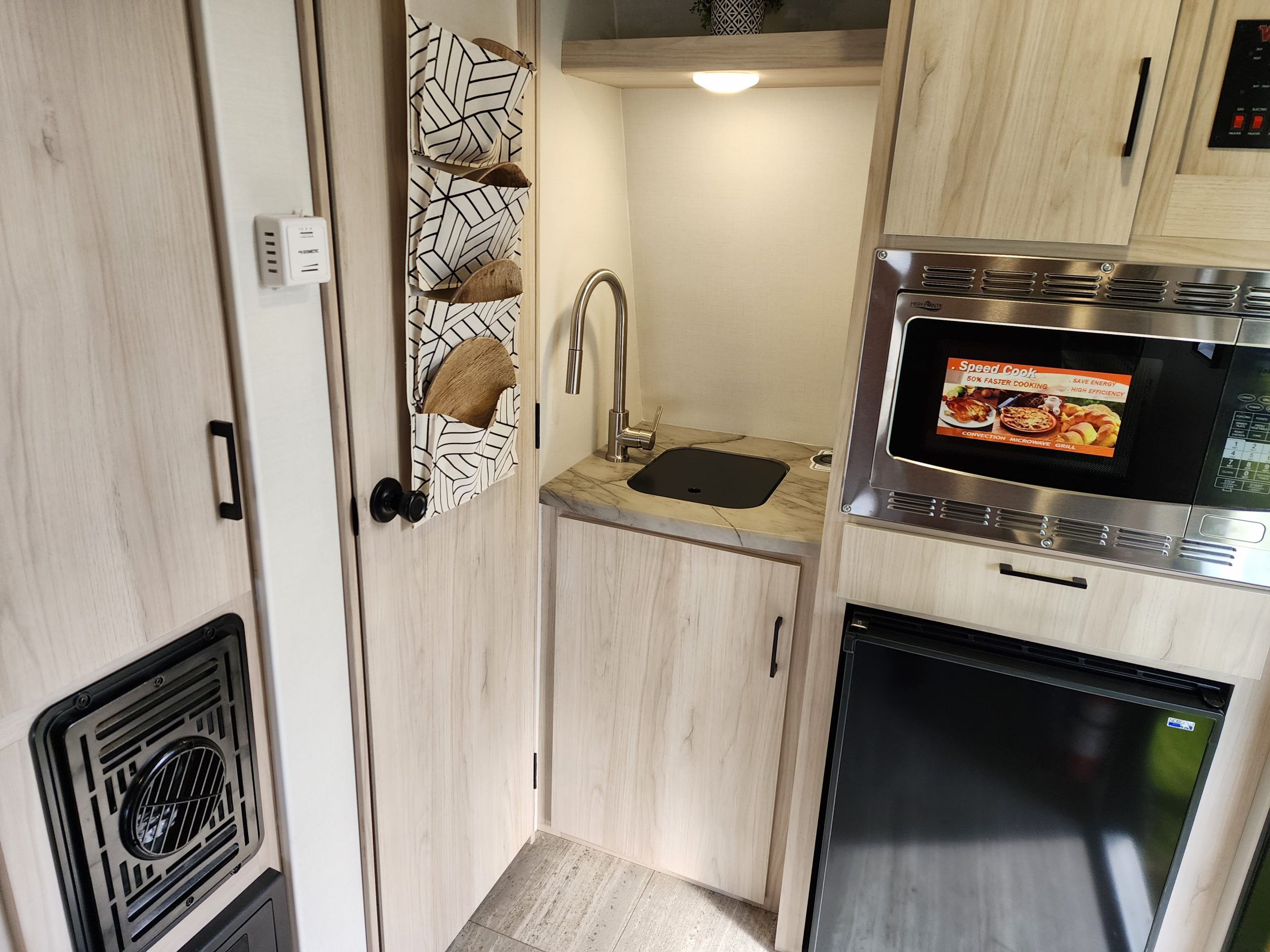 As far as storage goes, the Winnebago has a 31-gallon fresh tank, 4.75-gallon black tank, and a 25-gallon gray tank. That black tank does disappoint me a little, as 4.75-gallons could get used up somewhat quickly if one of your campers has, say, an autoimmune disease. But otherwise, this thing looks and most importantly, feels, really solid. Depending on exact configuration, these have a dry weight of 3,000 pounds, too. So you could tow one with countless crossovers on sale today. 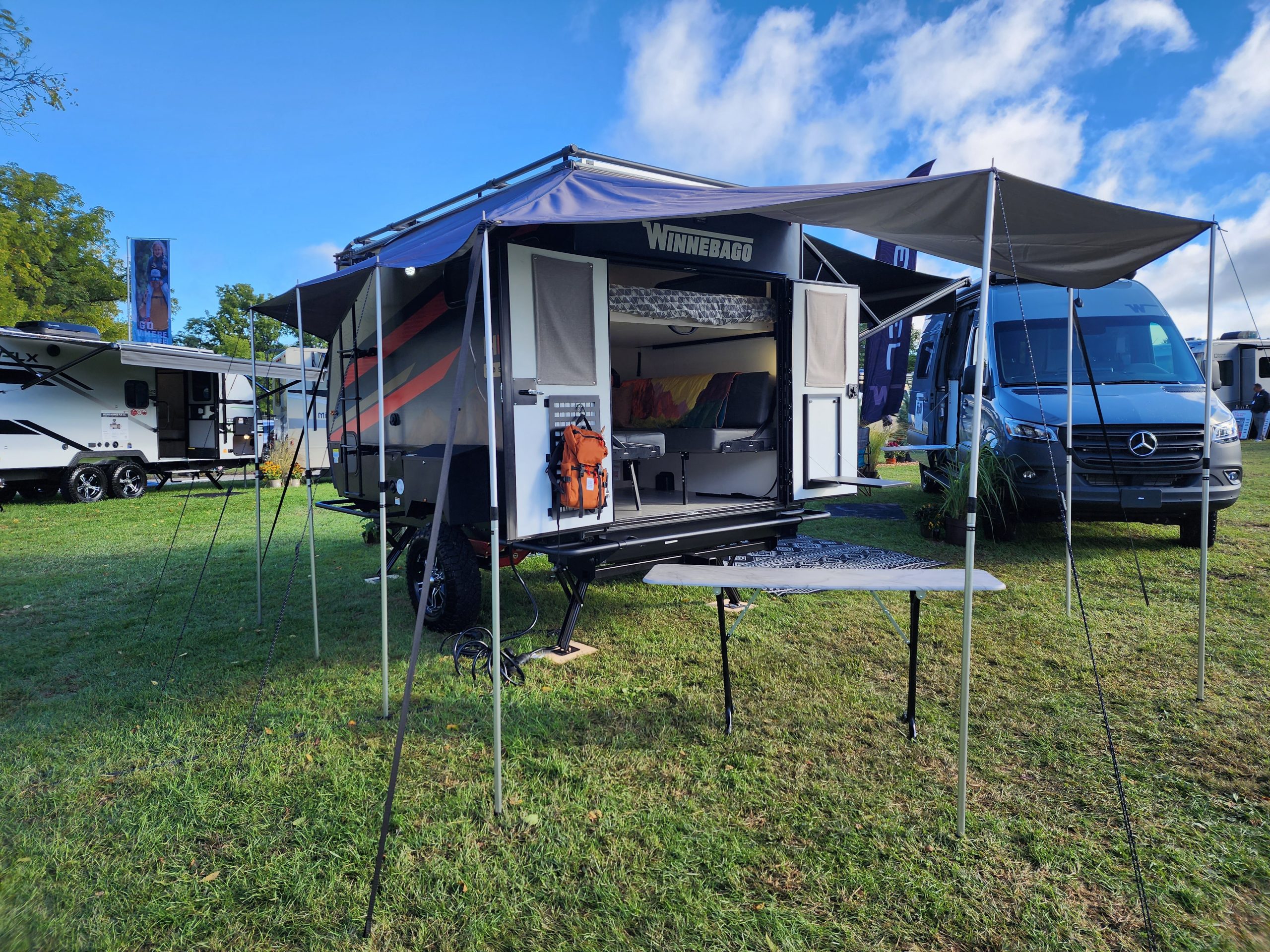 Winnebago’s MSRP for the Hike 100 starts at $46,135. That’s a huge amount of money, but I did some searching of RV dealerships and it seems like if you know where to look, you won’t be paying anything near that. I’ve seen new listings for $40k and below. This is another camper that I’d love to try. It seems like the perfect little rig for the couple who just wants to get away.

Mercedes is a lifelong fan of all things powered by an engine. When she isn't driving one of her five Smart Fortwos or her 14 other vehicles she could be found in the cockpit of a Cessna 172 or perhaps swimming in any body of water that she could find. She also has a deep love for buses of all kinds. Please send her buses. mercedes@theautopian.com Instagram: @mistymotors Twitter: @Miss_Mercedes30 Facebook.com/neonspinnazz
Read All My Posts »
PrevPreviousIacocca’s Comfy Cruisers: 1974 Lincoln Mark IV vs 1991 Chrysler LeBaron
NextHere’s Your Latest Update On Used Car Values According To America’s Largest Wholesale Car Auction NetworkNext