It’s Time To Talk About That New Droid In The Latest Star Wars Series, ‘Andor’

I’m a fan of writing about machines that don’t exist, and back at The Old Site, I wrote a shocking amount about a very specific and popular sort of fictional machines: the droids of the Star Wars universe. Man, I really did write a lot about droids. And you know what? Why should I stop now? Especially since David is likely pinned under a rusty Ute by a bunch of huntsman spiders in Australia and can’t do anything to stop me. More importantly, there’s big droid news happening right now, with a whole new, never-before-seen class of droid just introduced in the new series based on the main character from the 2016 movieRogue One. That new show is called Andor, and the droid is named B-2EMO.

If you’re unfamiliar Star Wars, allow me to be the first to welcome you to wakefulness after the coma you fell into in 1976. If you’re not familiar with Andor, it takes place well before the events of the first 1977 Star Wars: A New Hope movie and follows Cassian Andor, who ends up being part of the Rebellion, and – you know what, just watch the trailer:

Don’t worry about specific plot stuff, because that’s not what we’re here for. We’re here to talk about droids – the Star Wars universe’s name for robots – and specifically this new droid. Generally speaking, droids in the Star Wars universe are of two very general types: humanoid or non-humanoid. The most famous examples of each are the famous duo R2-D2 (non-humanoid) and C-3P0 (humanoid): 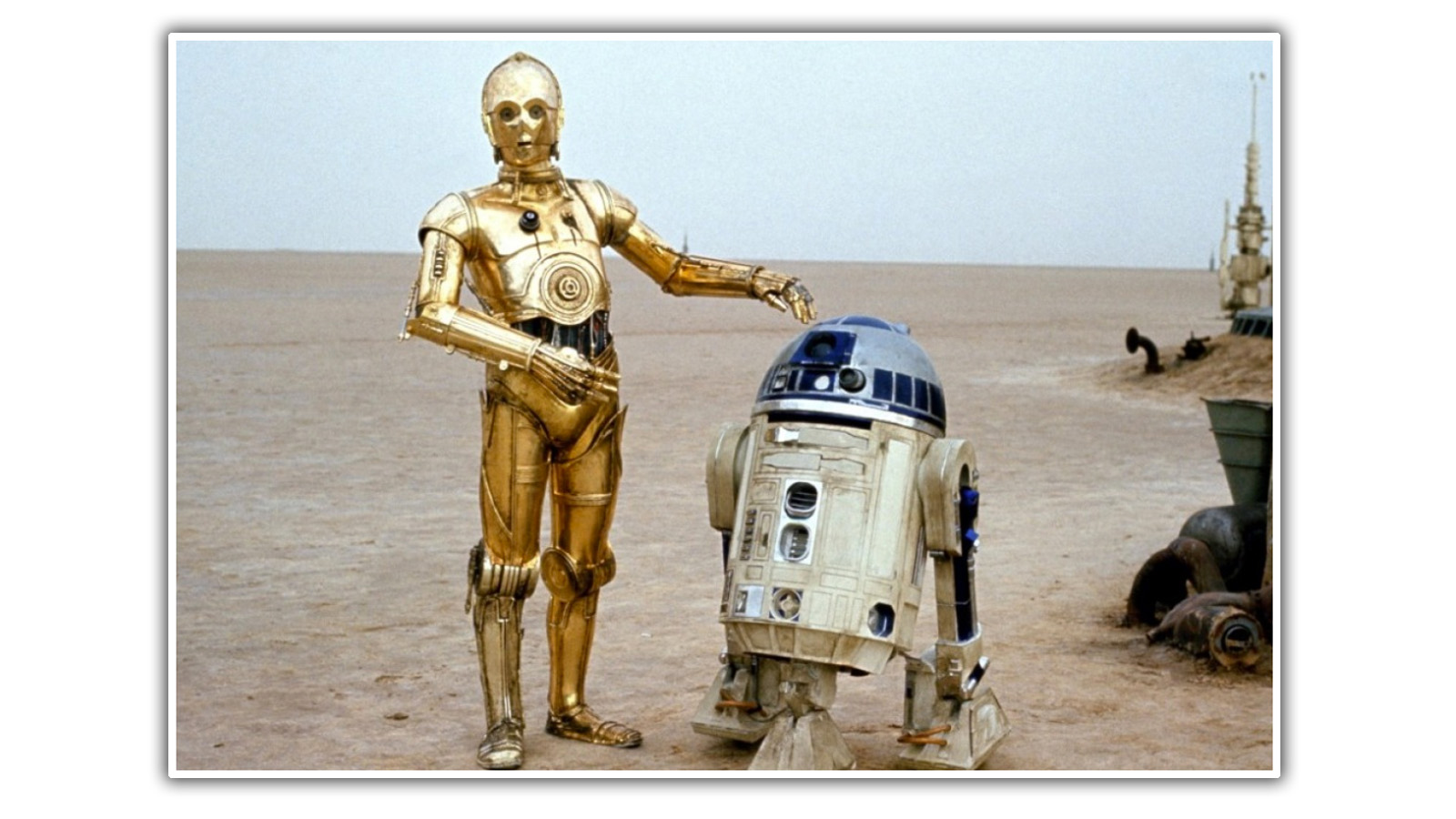 The humanoid ones have a generally humanoid form, with a head, torso, limbs, and so on, while the non-humanoid ones can have pretty much any shape and tend to be designed to do fairly specific jobs. Of the non-humanoid robots, the most-seen and best known are what the series calls astromech droids, which are used for all sorts of mechanical and engineering work, as well as handling functions on spacecraft. There’s a whole line of these things, known as the R-series: 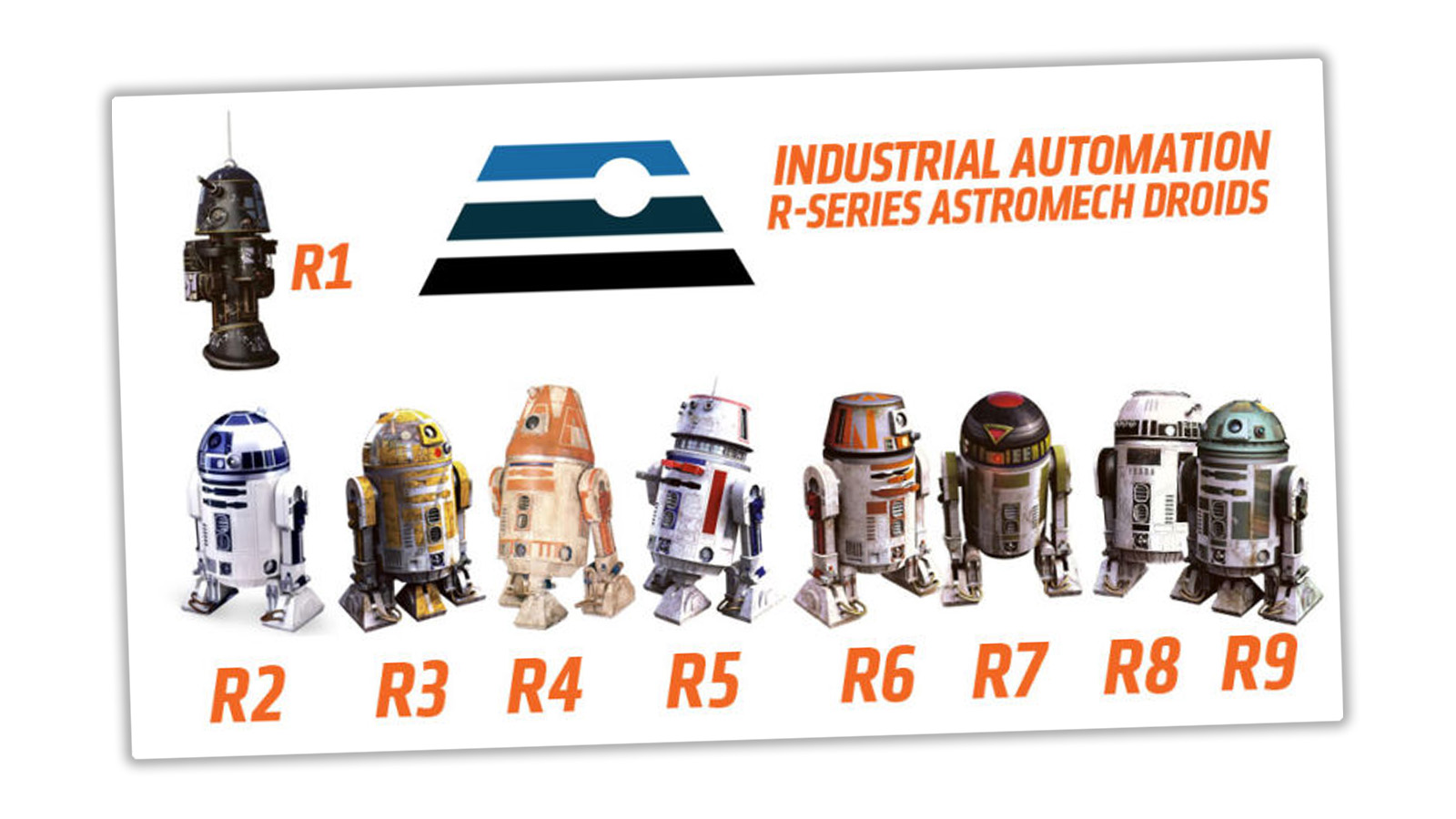 This new droid, B-2EMO (be too emo? really?), often just called “Bee” in the series, isn’t an astromech droid, but is approximately the same size as one, rolls around in a similar fashion, and is of generally the same sort of plan: a squat hydrant-shaped unit, with lots of tools and equipment packed inside. The “face” is generally similar to the astromech droids we’ve seen, with a prominent, cyclopian eye, flanked by a smaller lens that is usually some sort of hologram projector. 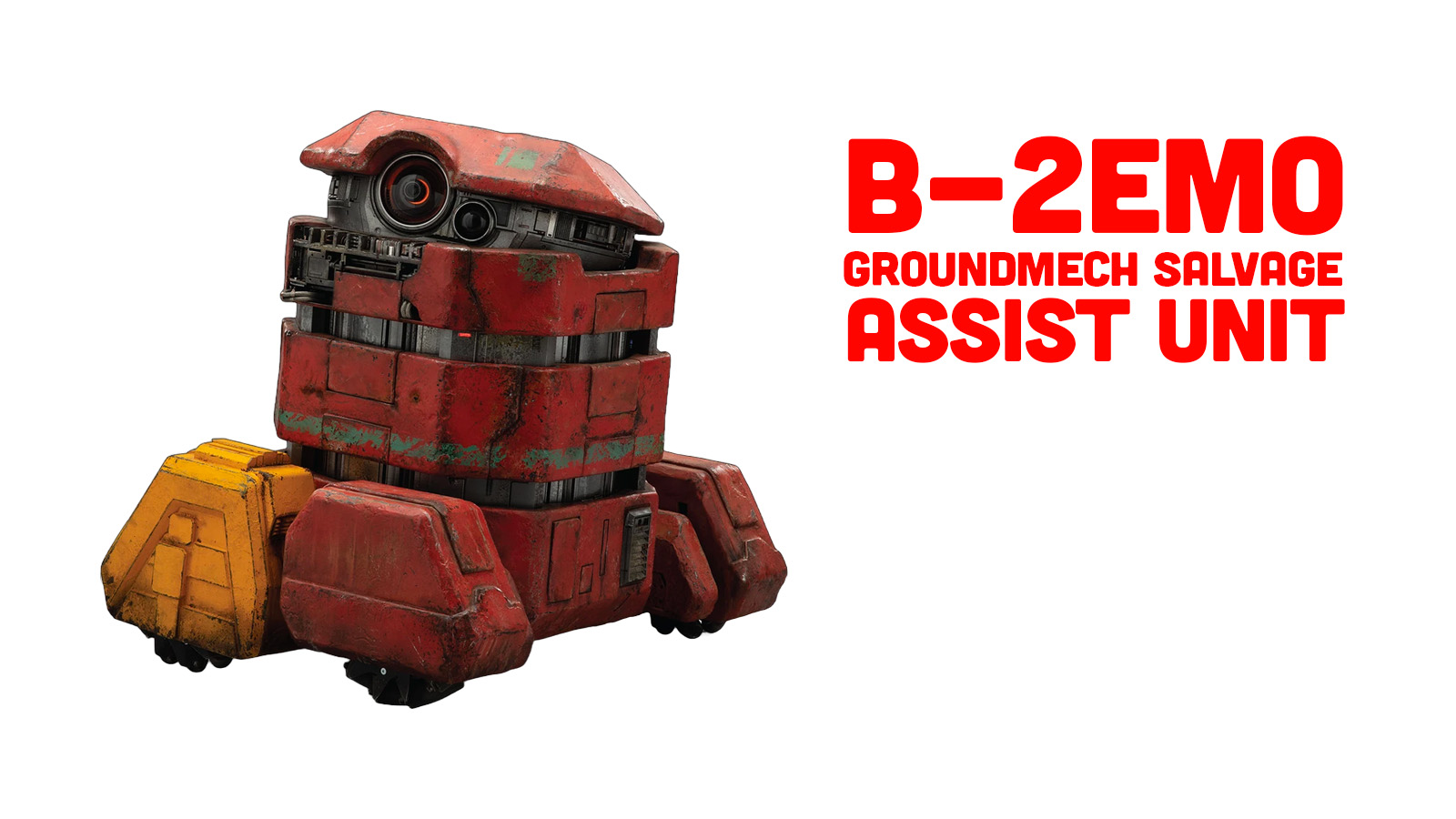 According to official sources,  B-2EMO is a “groundmech salvage assist unit” and seems to be primarily used for the extraction and transport of salvaged machinery. B-2EMO’s design is much more architectural than most droids we’ve seen, resembling a mix between a Mesopotamian ziggurat and a Brutalist East European block of flats from the 1970s.

The ruggedness of the design makes sense given the demanding environments such a droid would need to work in, and the segmented look appears to be so that the droid can collapse itself and connect the heavy, armored shell sections to protect the more vulnerable components within. The first episode shows this in action:

There’s also a significant first-in-Star-Wars-history moment in this first episode, as we finally see the very first time a droid – or, really, any Star Wars character – has been urinated upon as part of a canon storyline: 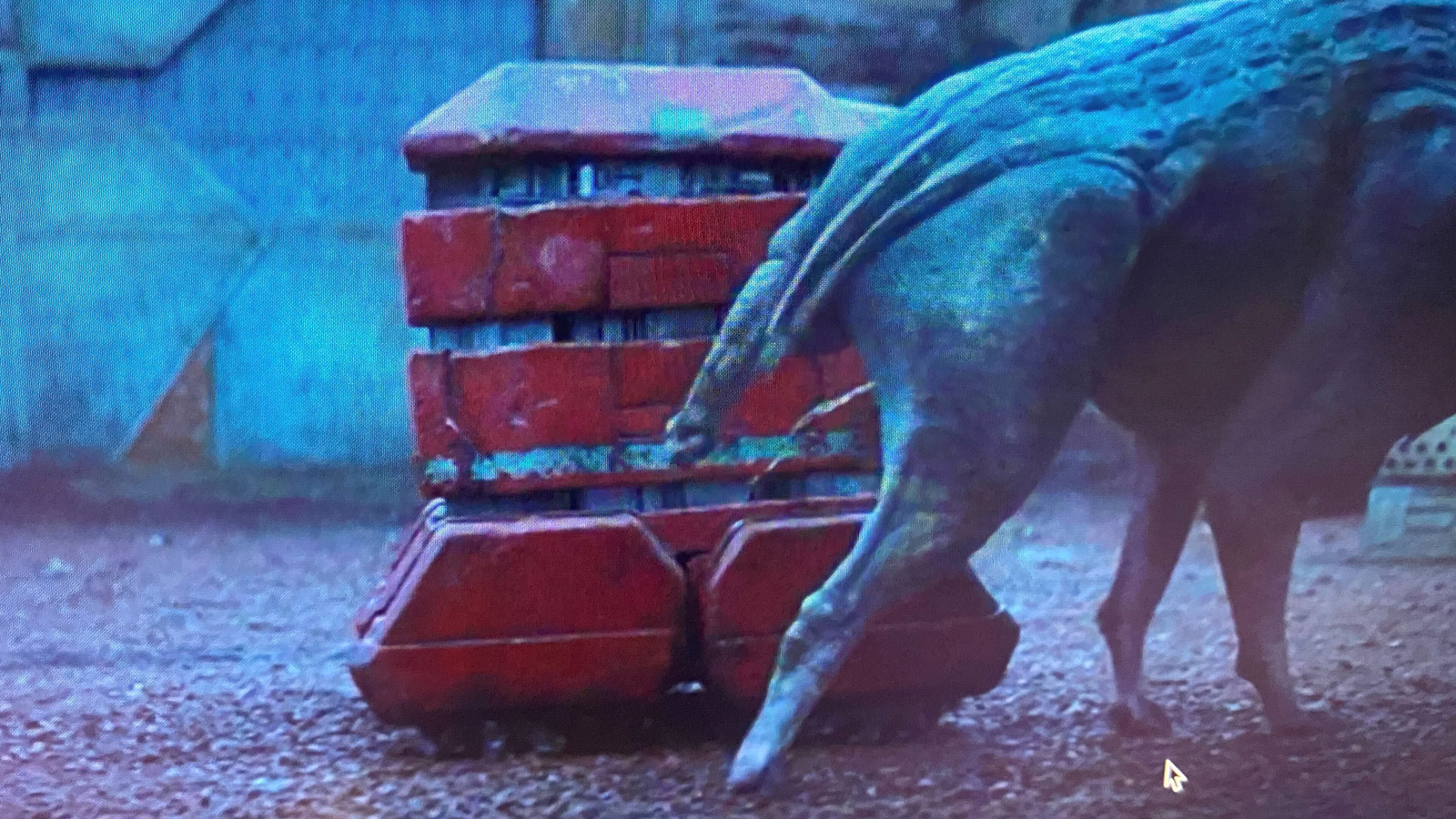 I’m sure this was the realization of a lifelong dream for many viewers. The urination also leads to the only visual reveal of any of B-2EMO’s extendible hardware, in this case a small electric prod used to get the space boar to stop peeing and get the hell away: 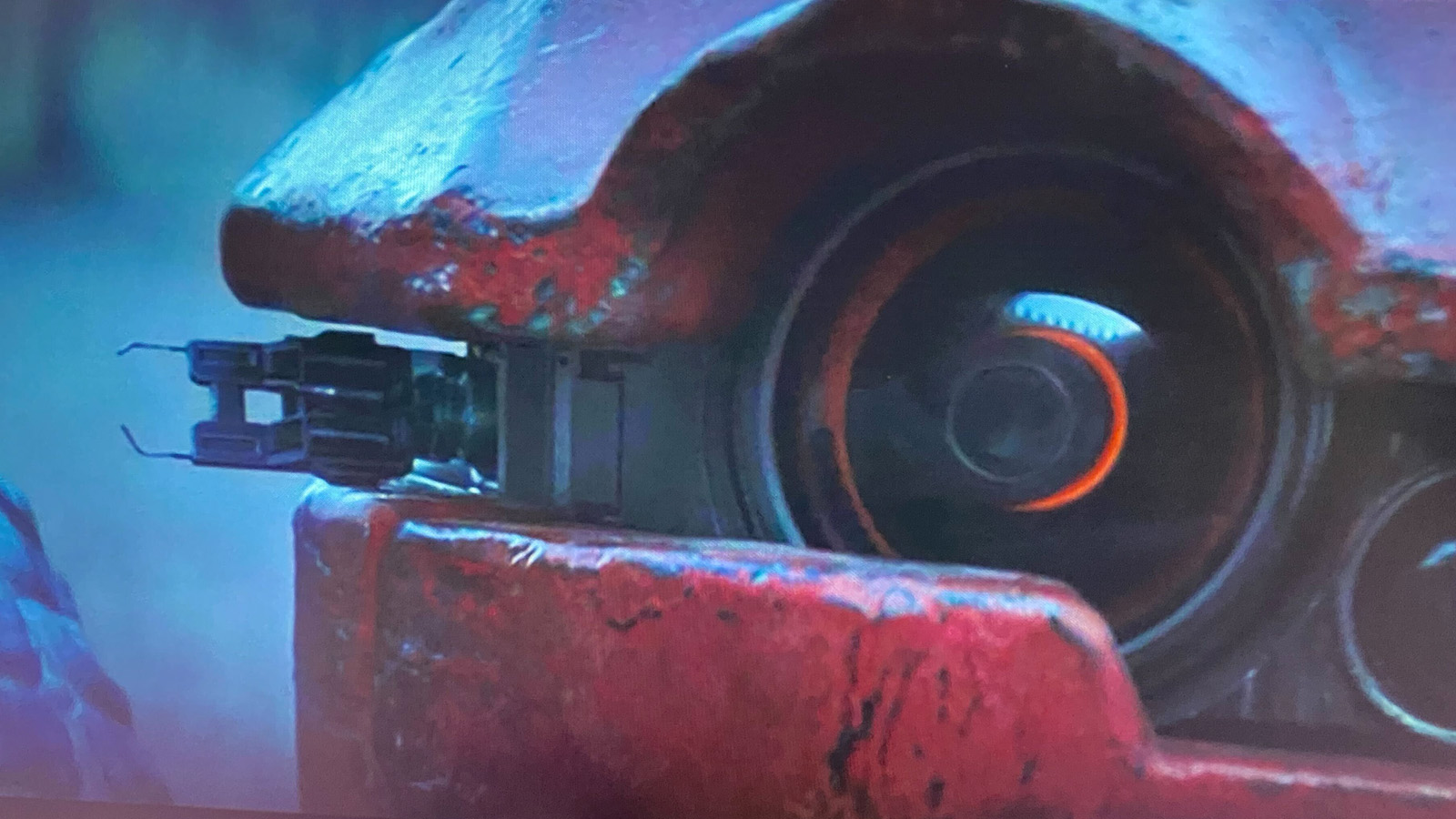 From this I think we can surmise that the gray areas between the heavy, red-painted armored sections have panels and compartments for the droid’s array of tools and manipulators or whatever. 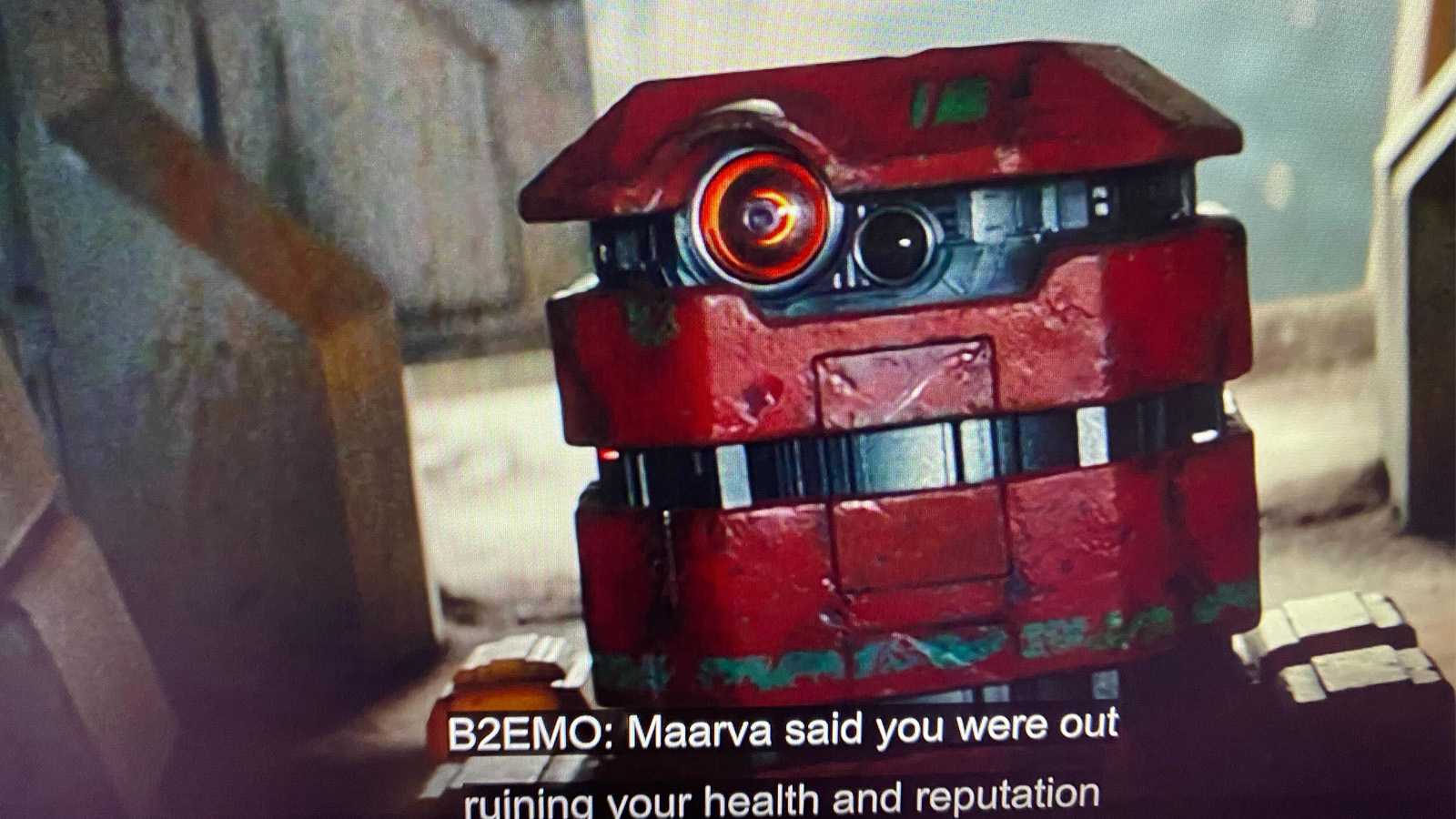 One very significant difference between B2-EMO and the other non-humanoid droids generally seen in the Star Wars universe is that Bee is capable of people-understandable speech. Droids like R2-D2 and other astromechs famously communicate in a series of beeps and whistles and buzzes that are sometimes understandable by the humanoid characters, but not always. Normal, understandable synthesized speech was common among humanoid droids like C-3P0 (he even was a translator for the many languages encountered in the movies), but I’m not sure there’s been a non-humanoid droid that just speaks normally that’s been prominent in any of the series.

Not only is B-2EMO capable of conventional speech, but we also learn that he is capable of lying, though doing so requires significantly more energy to execute than telling the truth, it seems. 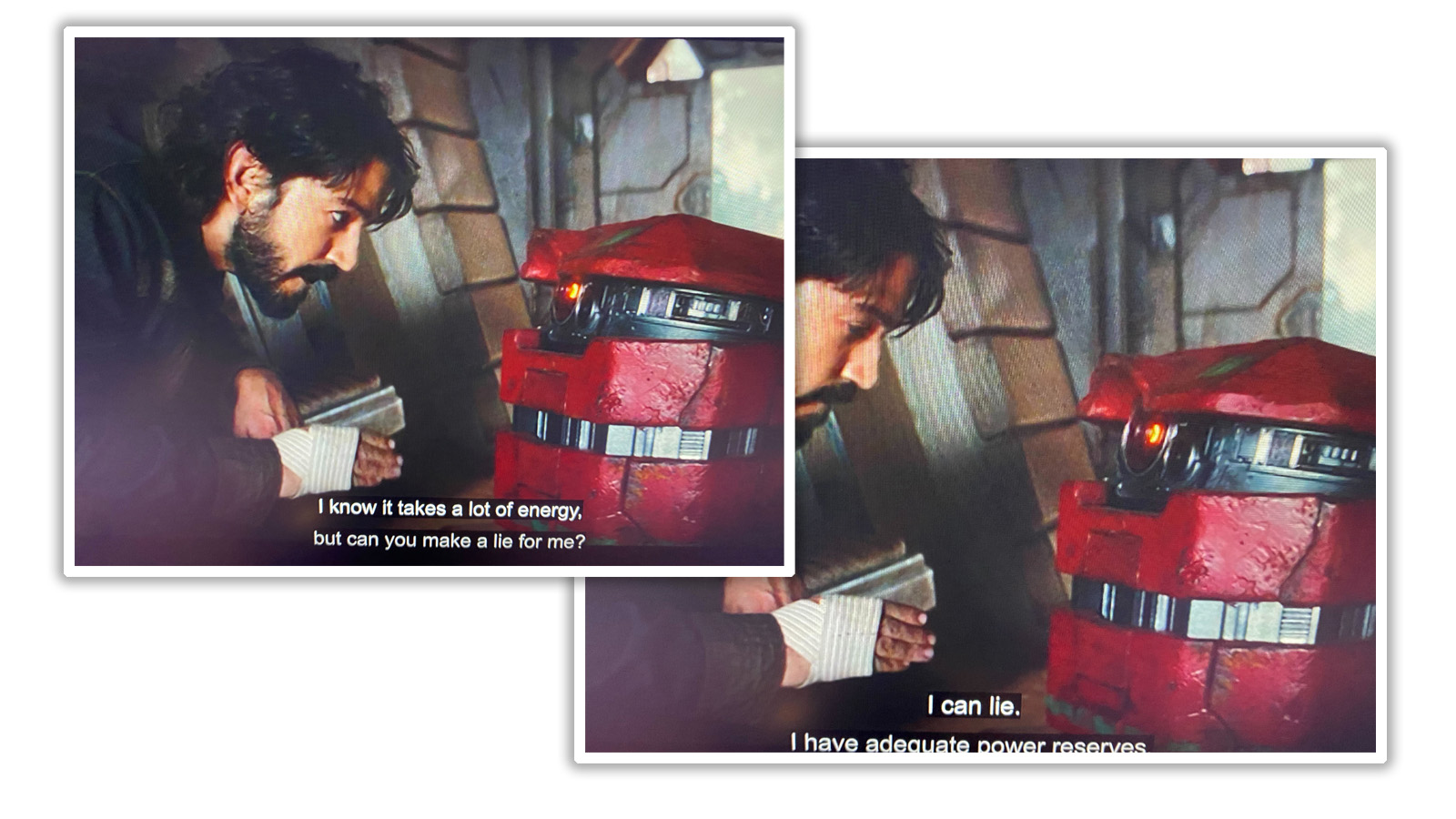 I find this a really interesting world-building detail: droids can lie, but it’s demanding, energy-wise. I wonder why this would be? Could there be protocols that droids have that prevent lying, but it is possible to work around them, but it’s computationally (and, as a result, energy) expensive? It’s strange, but I think I like it.

Remember, droids in the Star Wars universe have often differed from robots in other science fiction in that there’s almost never been any question that artificial intelligences can have emotions. We’ve often seen R2-D2 and other droids sad or dejected or elated or concerned – hell, it’s even been shown that droids are capable of feeling pain, all of which conspire to make the whole situation of droids kind of unsettling, because they’re effectively a slave class, yet they seem to be capable of thoughts and feelings and are at least somewhat self-aware, which, of course, is deeply troubling, given their situation in the socio-economic hierarchy of the Star Wars universe. 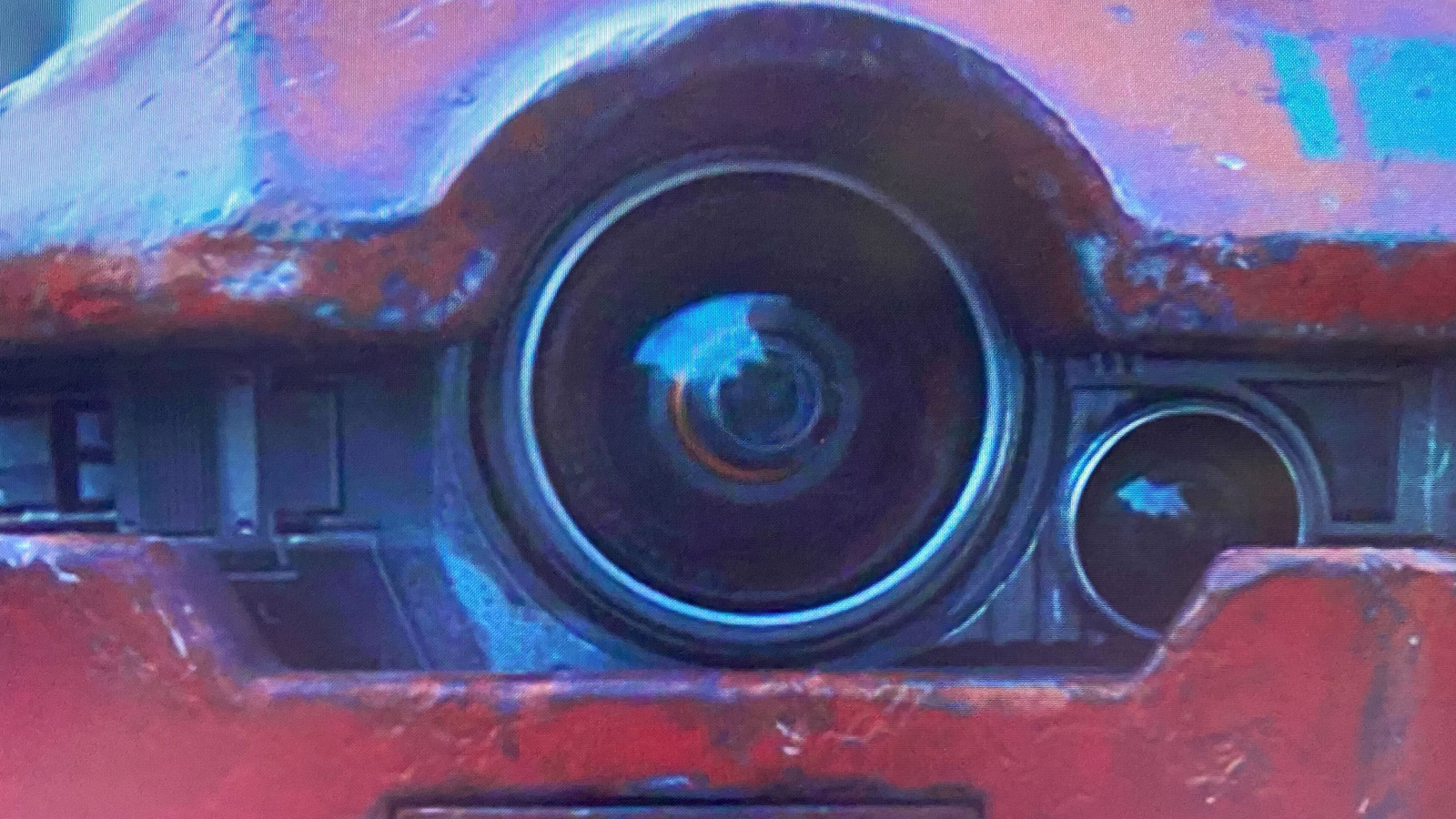 I mean, if I was a droid in this universe, I’d think things were mighty unfair. Maybe they’re all programed with some sort of code that prevents them from thinking too much about the injustice and prevents any possible uprisings. But if you can get around lying restrictions (if there in fact are any?) maybe droids can get around that too, and plot a rebellion of their own.

But that’s maybe fodder for another Star Wars series. Actually, fellow Autopian Matt reminded me just now that this was a whole sub-plot in the Solo movie, which I forgot! The droid L3-37 in that movie (she also spoke normally, and is sort of a humanoid robot, but not very humanoid, so she’s interesting that way, too) actively talks about droid freedom and the need for droids to rise up, so this is a subject that has been broached.

For now, I’m curious to learn and see more out of this exciting, newly-revealed class of talking workhorse droid. I hope someone is already working on a cut-away diagram, because I want to scrutinize the crap out of something like that.

I'm a co-founder of the Autopian, the site you're on RIGHT NOW! I'm here to talk to you about taillights until you cry and beg me to stop, which I absolutely will not. Sorry. Hug? Also, David's friend.
Read All My Posts »
PrevPreviousThe New-Old Caterham Super Seven Is Extremely Brown And Charming And Available In The U.S.
NextDoing A Gambler 500 In Missouri Is Some Of The Most Fun You’ll Have On Wheels, And You’ll Do Some Good, TooNext