After 20 hours in the air, I have arrived at the Sydney airport. Immediately upon landing, I gripped both armrests firmly, controlled my breathing, panned my head around slowly, and waited. “Any second now,” I told myself, I’m going to witness weird things. Everyone had told me that Australia was an alternative-universe U.S.A, where toilets flush backwards, bolts screw in Lefty-Tighty-righty-Loosey, and Burger King has a weird name. but I’ve been off the plane for hours now, and, though the Burger King thing is real and shocking and took a bit of meditation to get past, everything else here seems perfectly normal. I don’t see what all the fuss is about.

I’m sure many of you are wondering about the state of my check-in bags. After all, I did bring some items that many of you thought would be confiscated by the TSA. Well, I’m thrilled to tell you that everything made it through! My gas-charged shock absorbers, which damn near every source on the internet says are prohibited from airplanes, are here safe and sound! 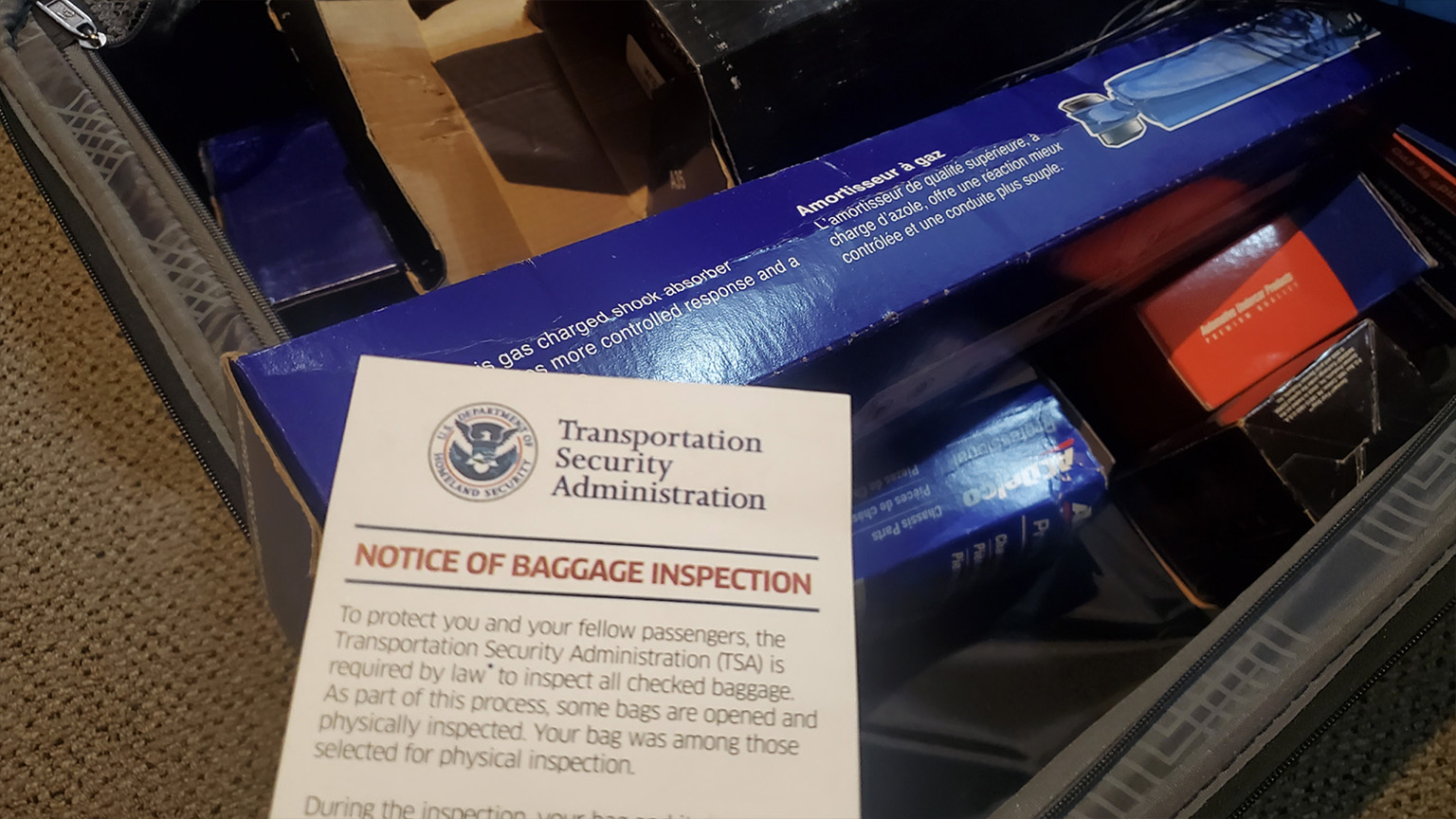 Unfortunately, those shocks — plus a heavy cast iron master cylinder and a bunch of other heavy car parts — ended up destroying one of my roller bag’s caster wheels, so I had to drag that 50 pound bag all across town as the wheel rubbed against the concrete; my whole body hurts as a result. Still worth it for the cheap parts. 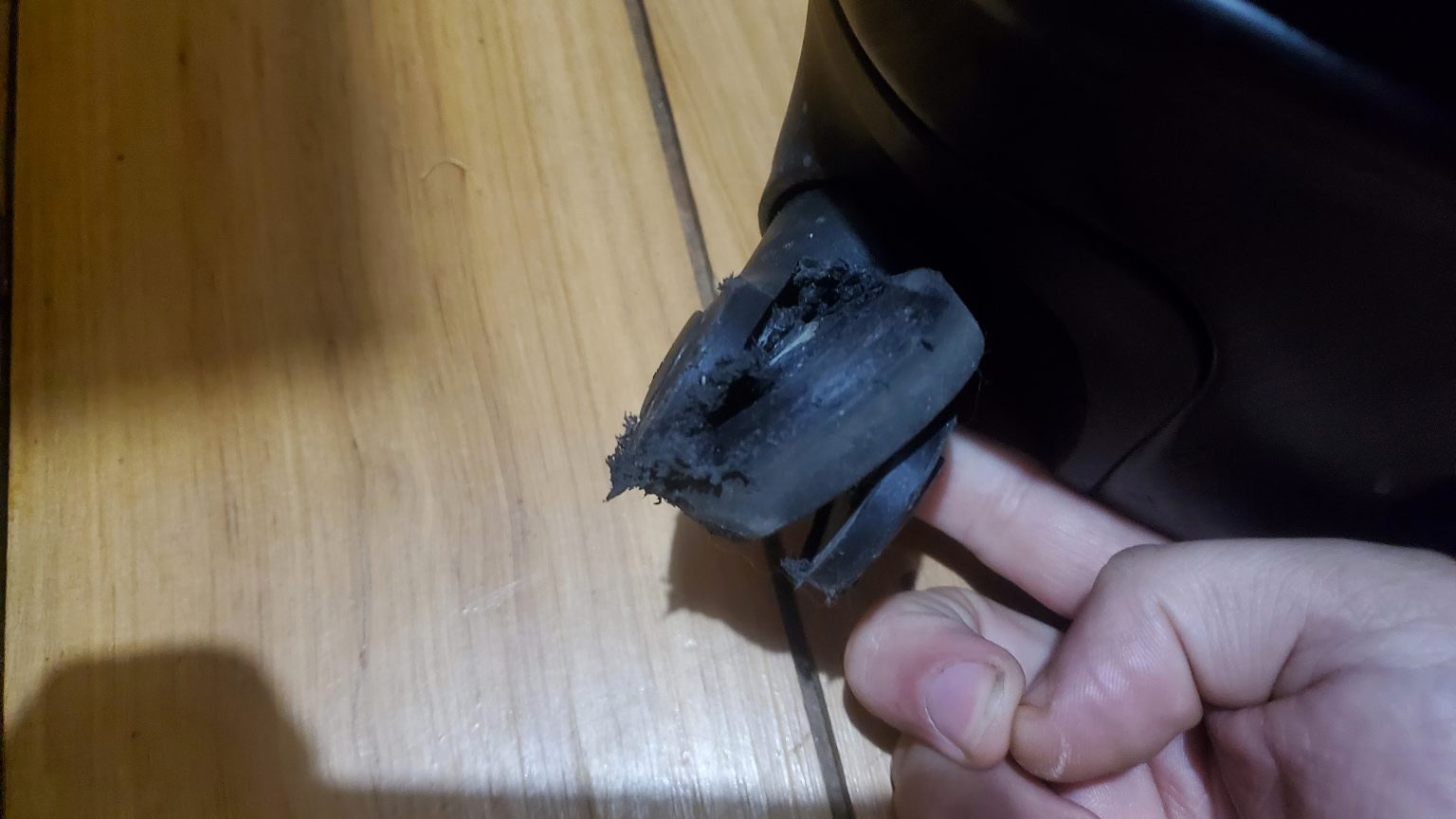 My can of Cleveland’s finest also arrived in excellent condition, ready to lubricate the crap out of rusty fasteners. The rest of my tools arrived without a fuss as well: 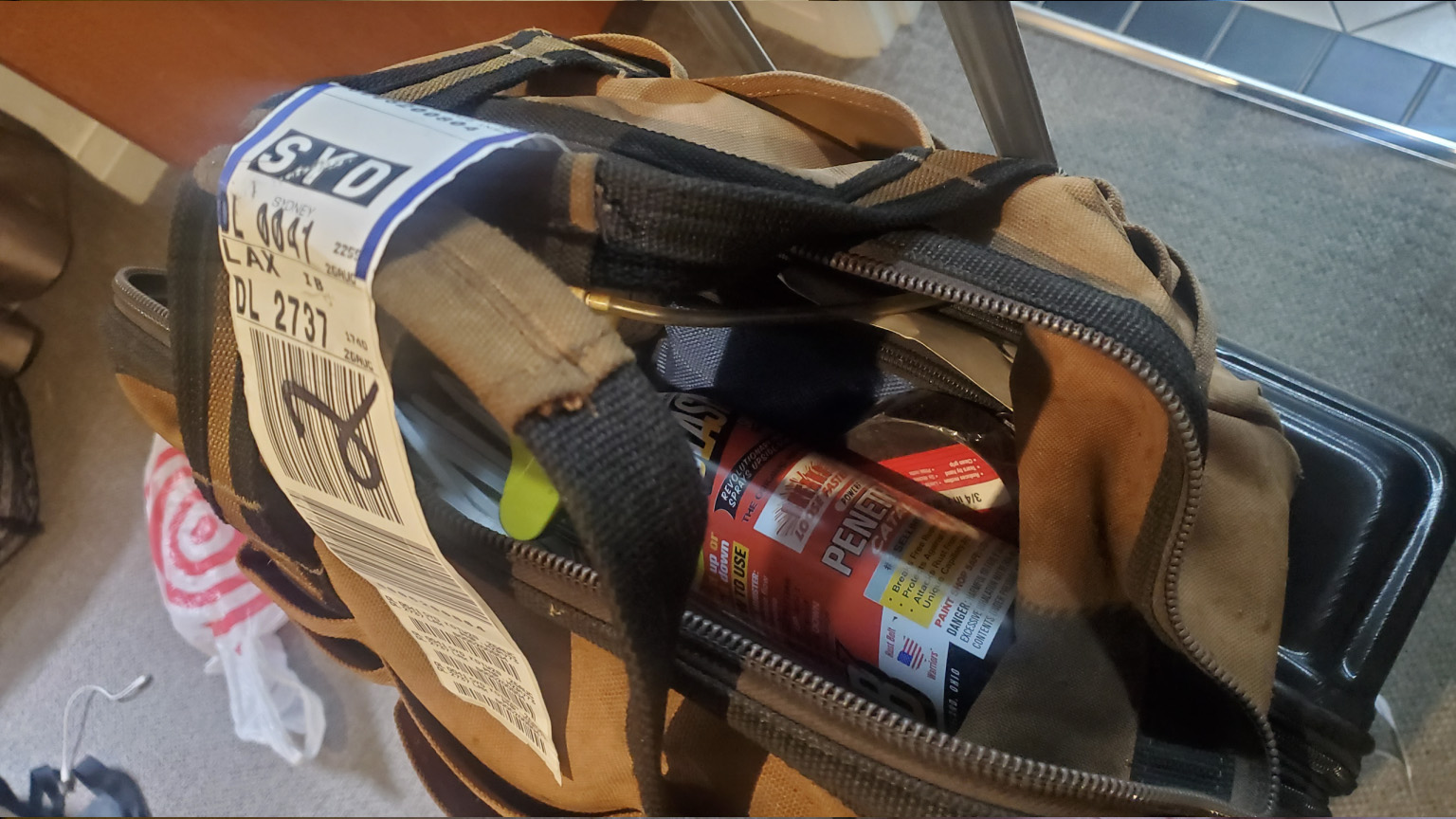 From the airport I hauled my spare parts and tools onto a bus, which took me to my hotel near the train station; I dumped the heft and walked to the harbor to see the lovely Sydney Opera House. I also took a boat to Manly beach, though it was a bit too chilly to take a dip, as it’s just now turning spring here in Oz.

[Editor’s Note: We received this video and caption from David:

We apologize for the technical difficulties; we have no clue why all of David’s text has been inverted for the past day or so; we’re discussing this with the Australian consulate. Until we get this sorted, we recommend that you use this text inverter website to help you read this article if flipping your device isn’t working. -JT]

While walking through Sydney,  I spotted some great cars. There was an Australian-market Jeep TJ Wrangler. Look at those odd amber taillights: 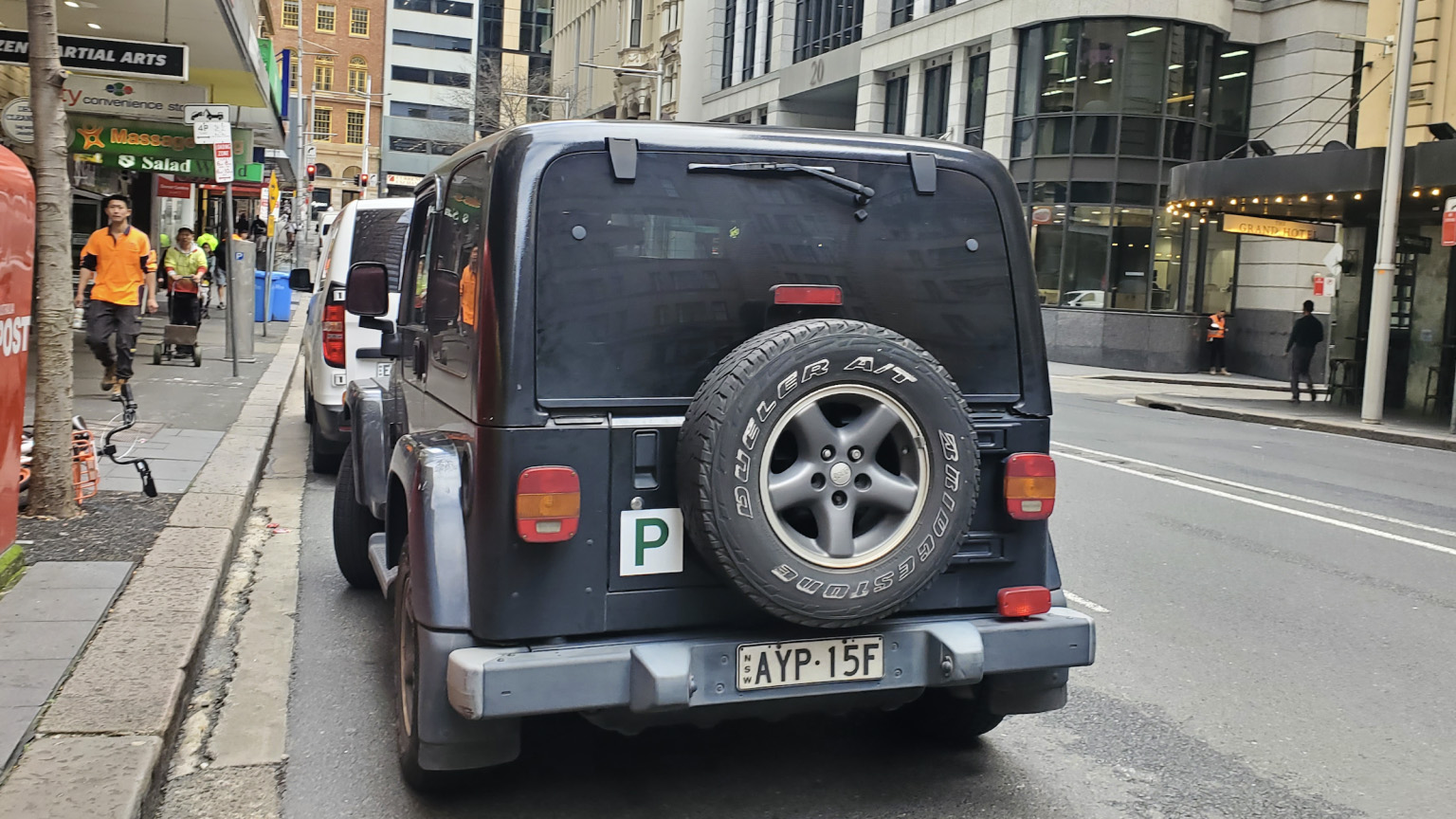 There was a Wolseley, a British brand that is famous, in part, because of its illuminated badge! 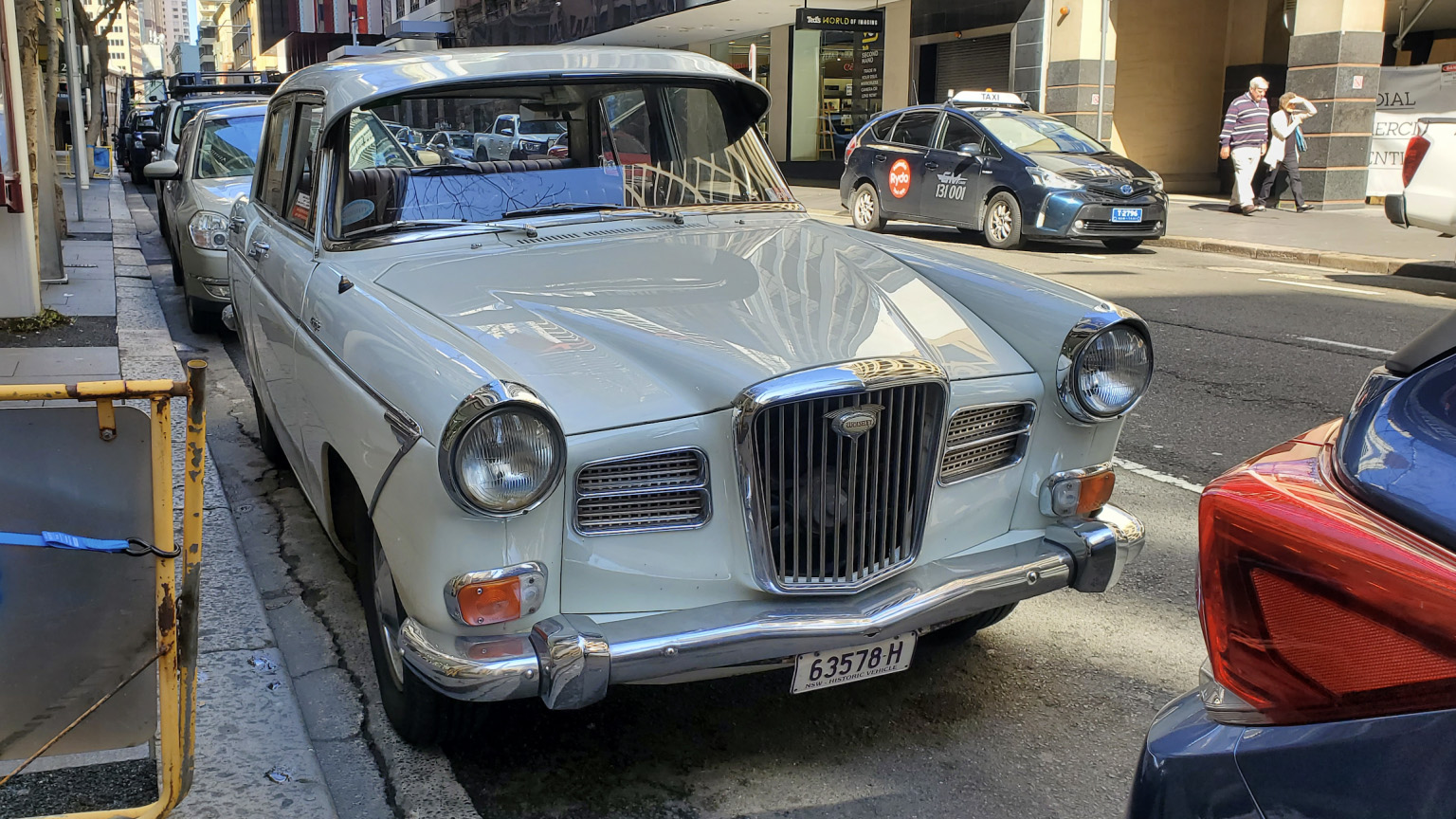 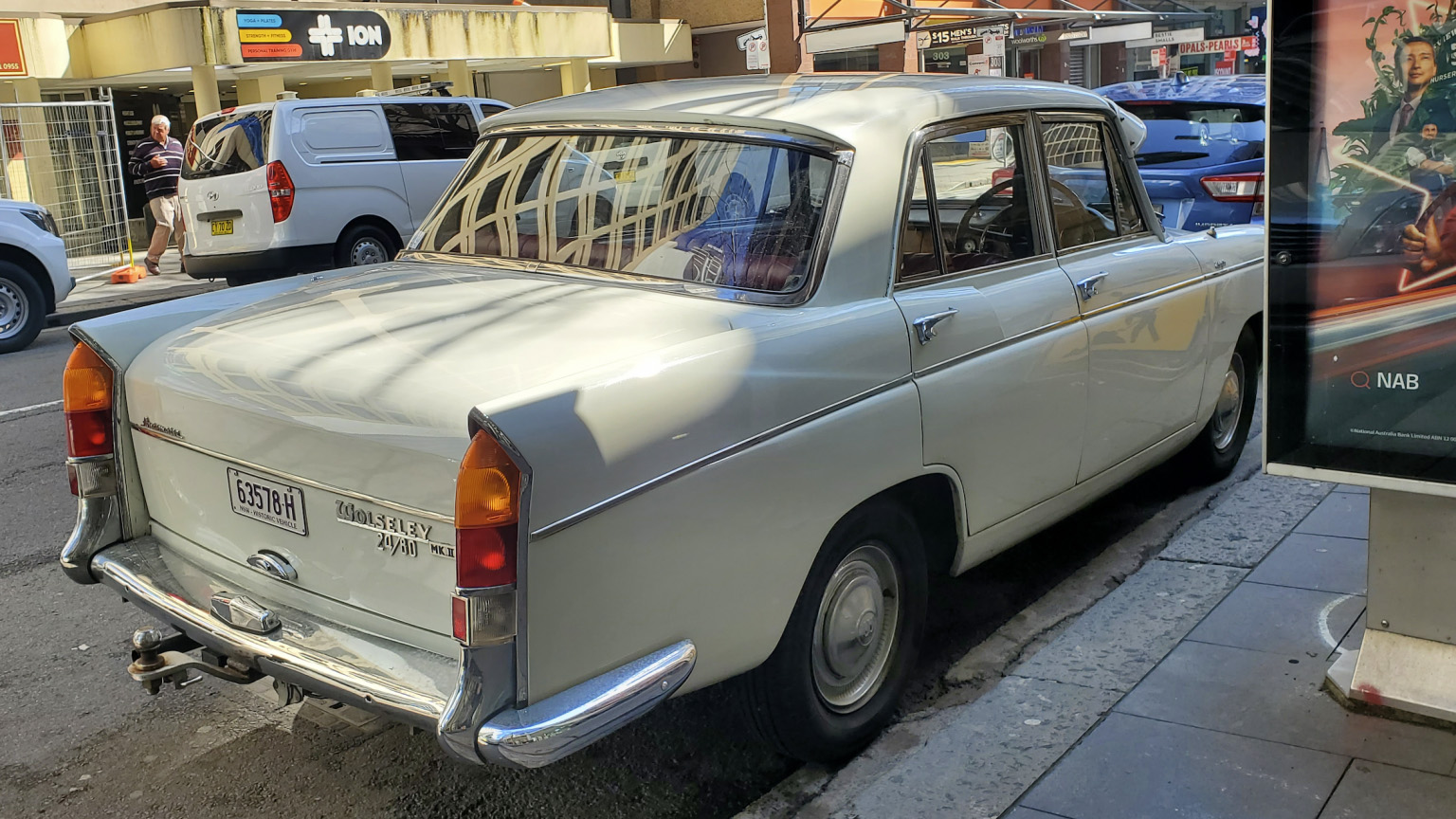 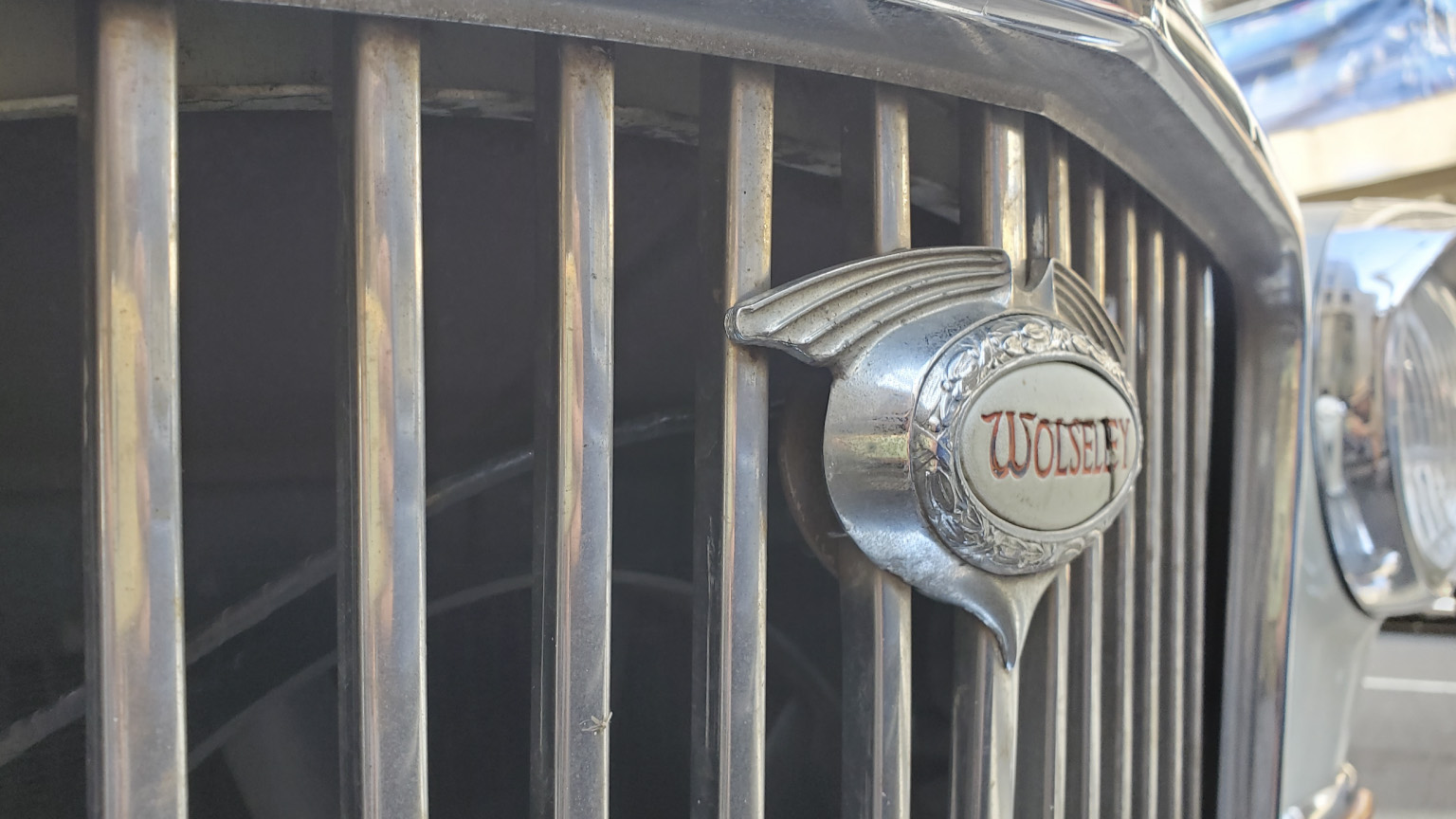 There was, stereotypically, a Toyota Land Cruiser built for overlanding duty: 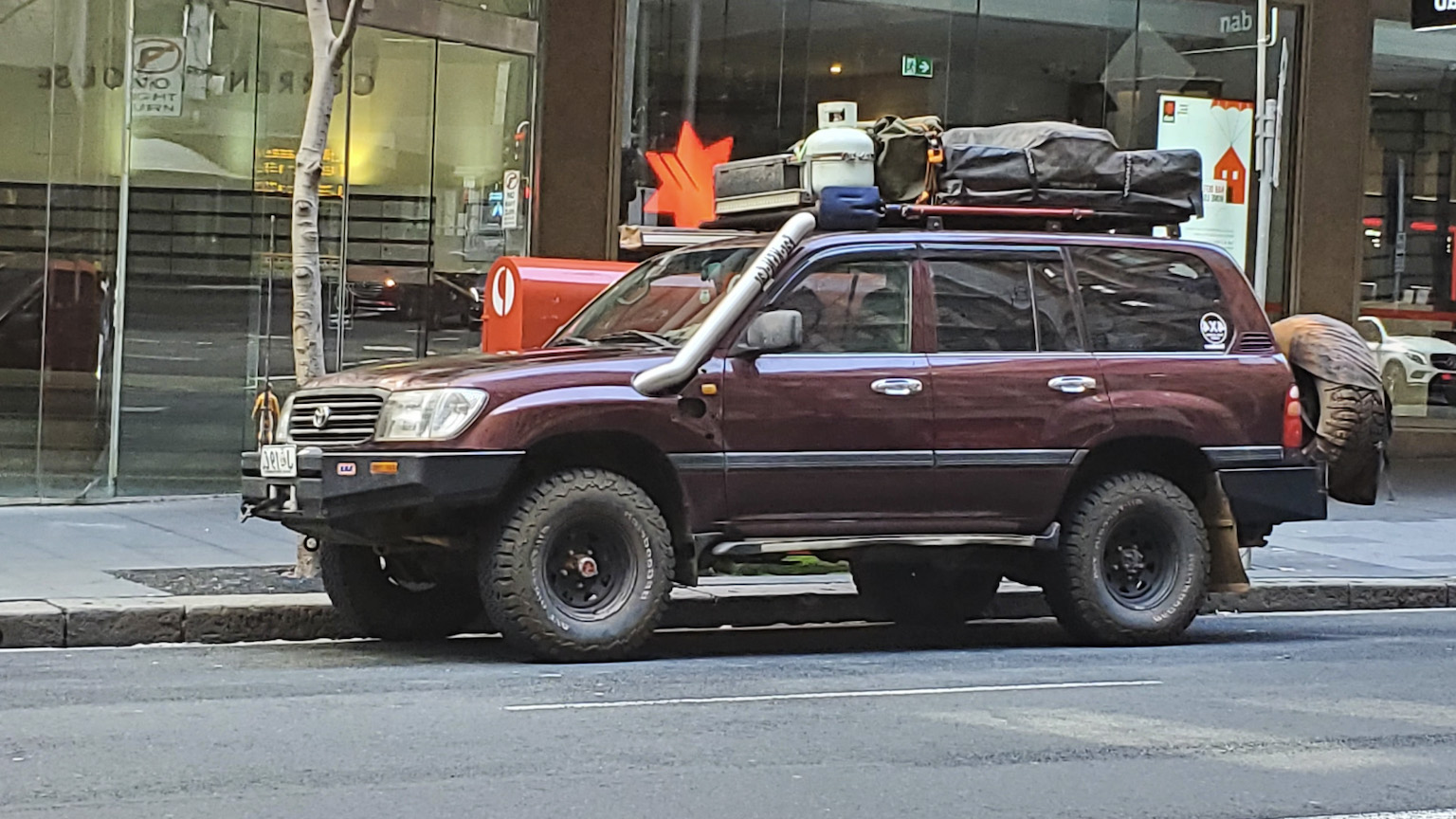 And there was this Mercedes, which I’m only including because I want to mention that these T2-based vans are known as Düsseldorf Transporters, named after the city where they were built. 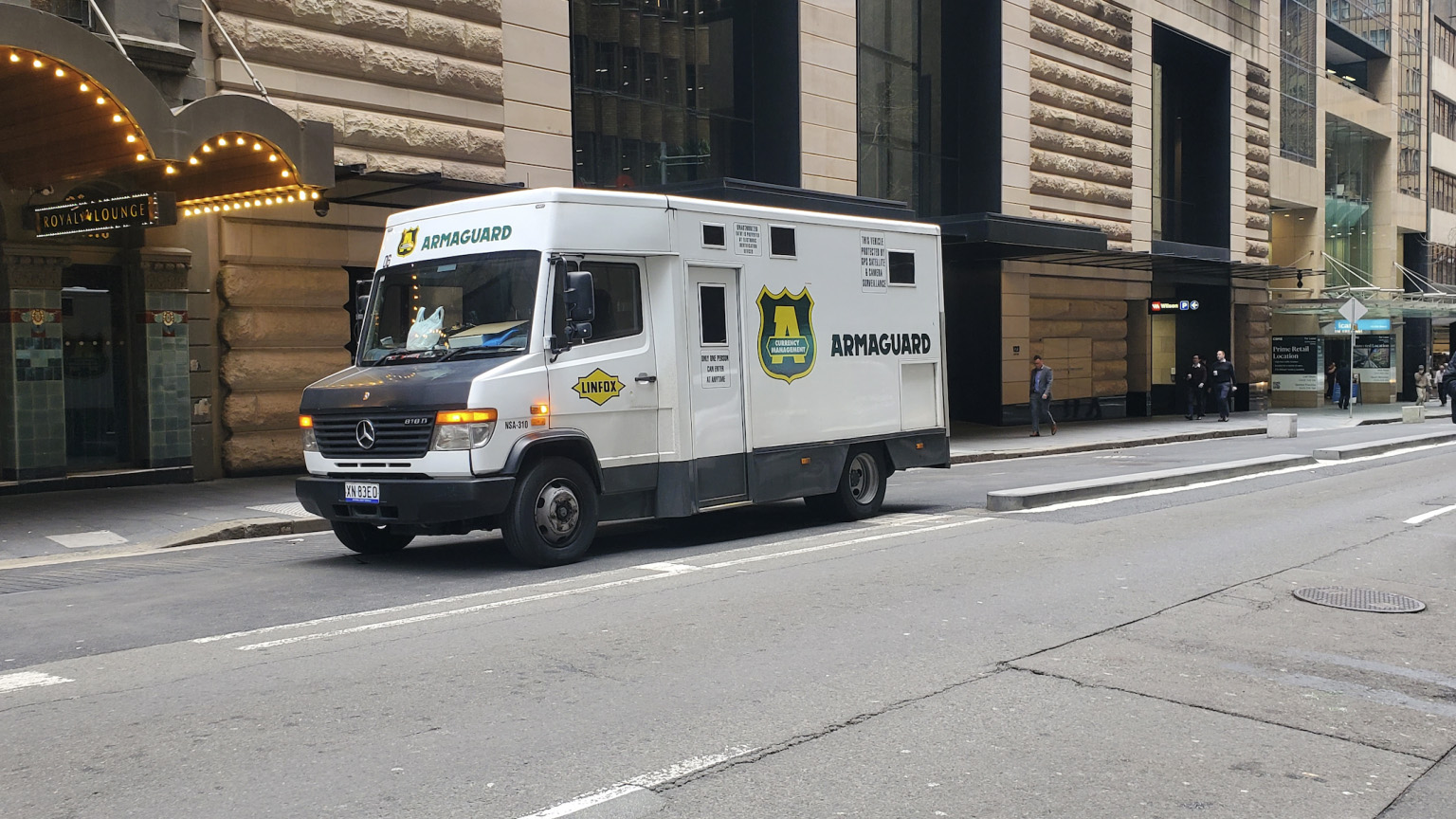 I had to make a pit-stop at a bookstore, as I forgot my Australian slang dictionary at home and things were getting real weird, real quick language-wise. For example: See this bird right here? 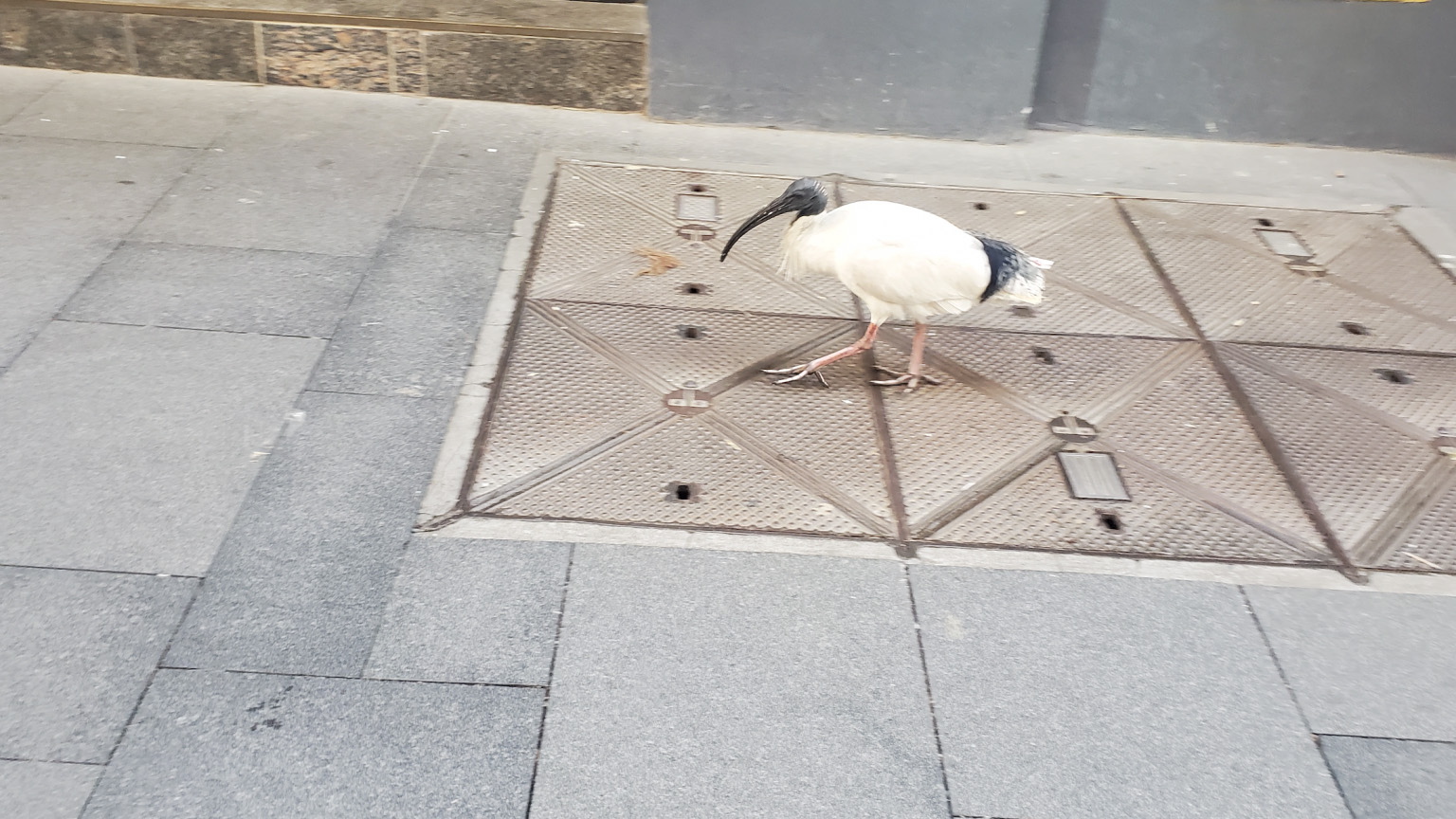 That’s a White Ibis, and you’ll find the thing all over the city. Turns out, the local nickname for them is “bin Chicken,” called for their propensity to snag bits of food out of the trash with their tong-like beaks. 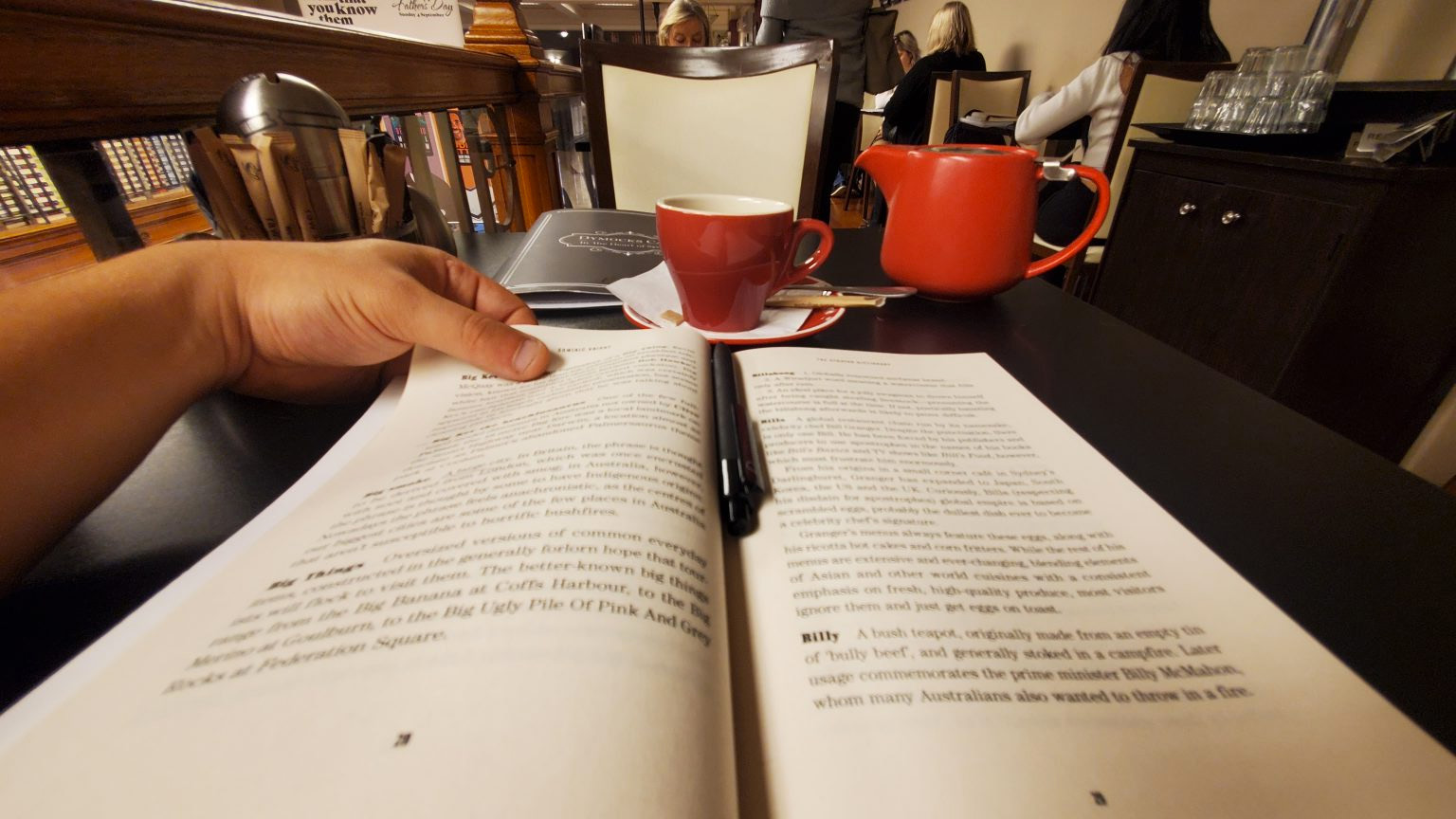 Just upstairs from the book store I found a café, so I snagged a cup of tea and a Schnitzel (which I later learned is popular, and referred to by some locals as a “Snitty”) and began reading my book. There’s some seriously great stuff in there, including the term “maggoted,” which means drunk, and the phrase “mad as a meat axe.” 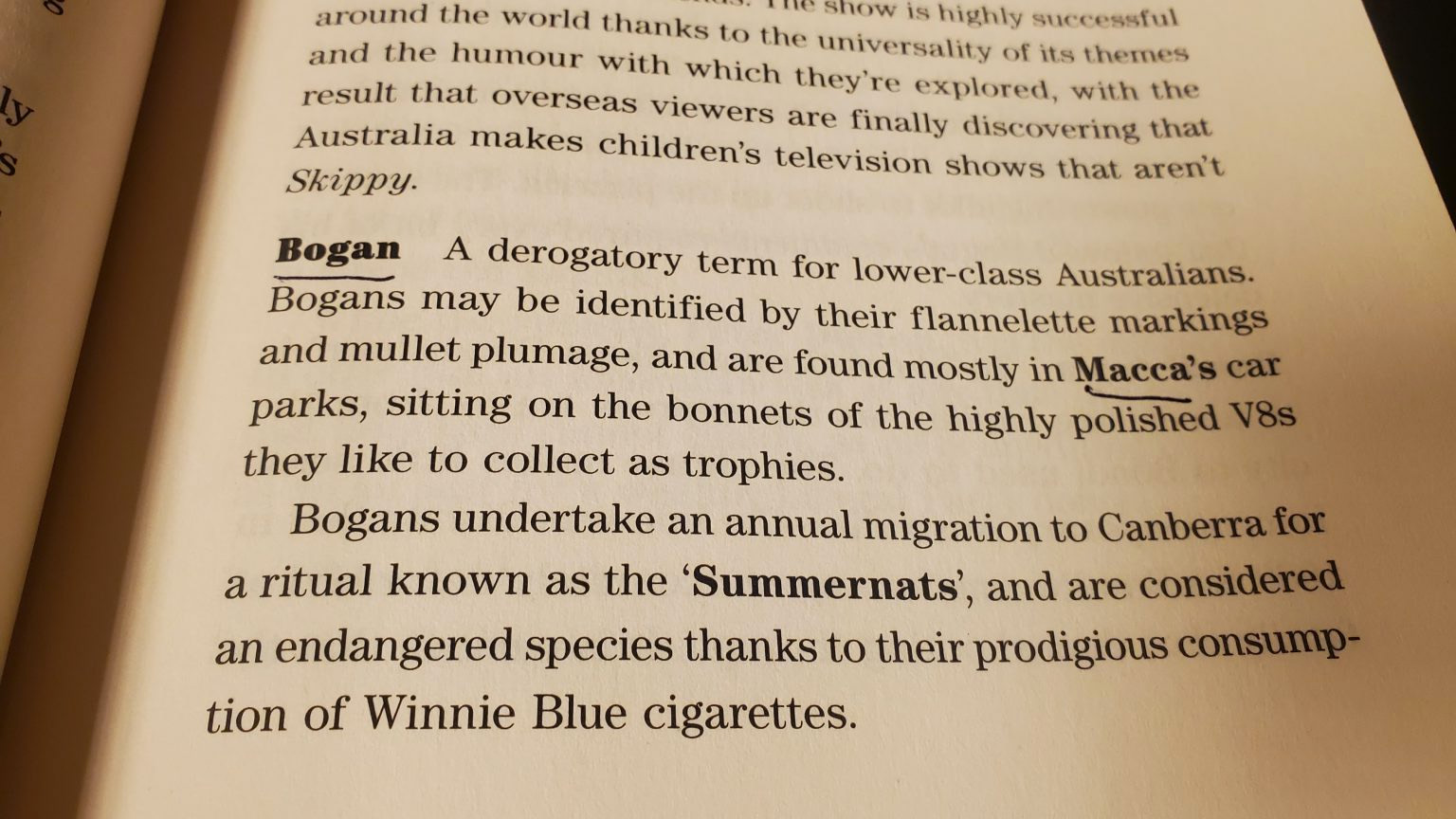 Of all the entries in that slang book, there’s one that had me a bit…confused. It turns out that people who like hanging out in their V8 powered cars in McDonald’s parking lots are known as “bogans,” which is apparently derogatory. I myself am pro-hanging-out-in-parking-lots-with-cars; in fact, I hold a regular car meet in a local Walmart parking lot in Michigan. What’s more, the entry says the go-to garb of a bogan is flannel, and I was wearing this at the time of the reading. Slightly worried, I consulted with my host, Laurence, who confirmed my fears: 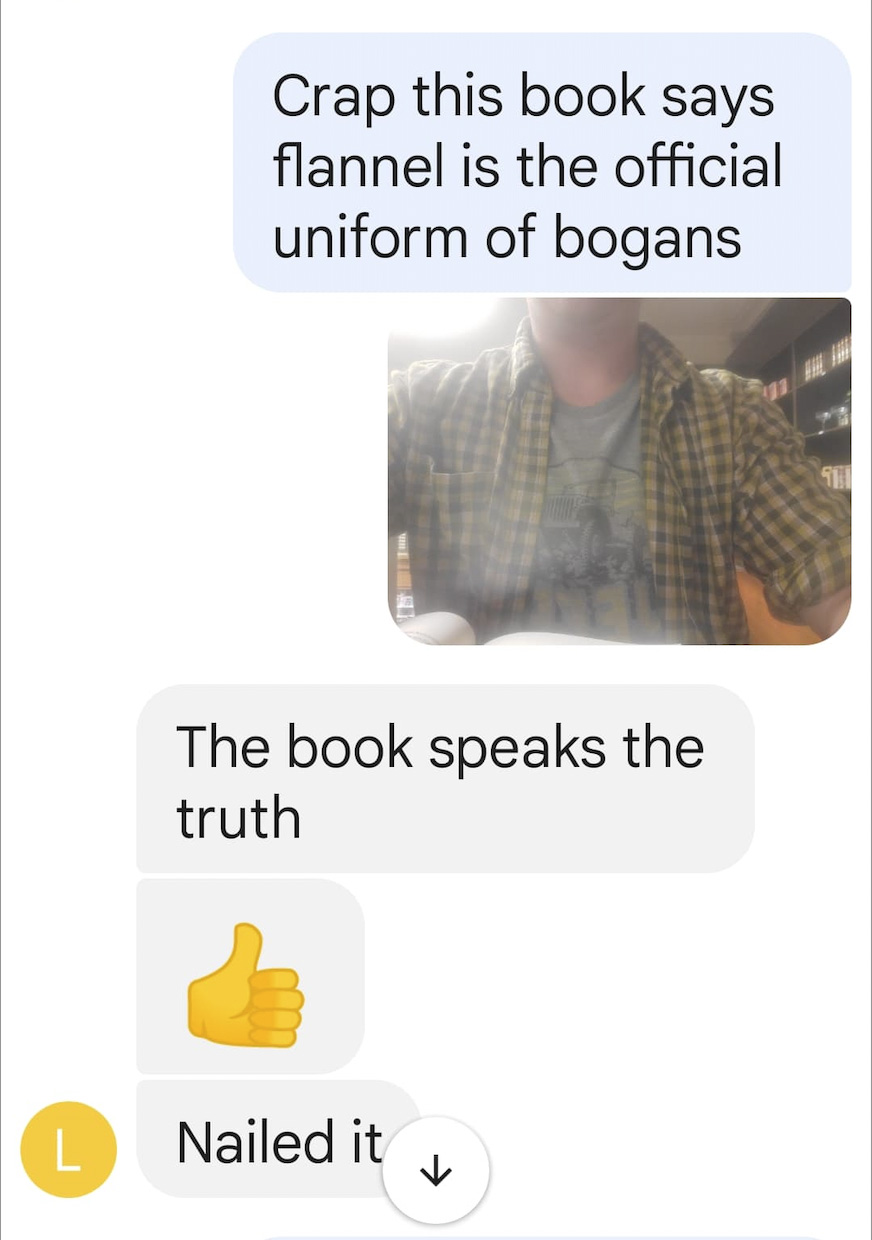 Much like the Burger King realization, this required me to check in with a therapist and do a bit of meditation, but I’ve come to terms with my boganity. I’m even considering leaning into it with a mullet and endless playing of Acca Dacca on my ute’s radio when I get the thing running.

Speaking of, I’ll be getting a first glimpse at my 1969 Chrysler Valiant Ute — the main point of this whole journey — very soon, as I’m boarding the train for Dubbo tomorrow. Later today I’m hanging out with the University of Technology Sydney’s Formula SAE team, so get ready to read about some enginerds! Follow my Instagram, and that of The Autopian, to get the most recent updates on this, frankly foolish, endeavor.

I'm a co-founder of the Autopian, the site you're on RIGHT NOW! I'm here to talk to you about taillights until you cry and beg me to stop, which I absolutely will not. Sorry. Hug? Also, David's friend.
Read All My Posts »
NextWelcome To The Autopian: The Ultimate Car Website For The PeopleNext