Jeep is too chicken to sell a truck like this “JTe,” which was built by custom-Jeep fab company Unofficial Use Only and revealed by my go-to Jeep parts company Quadratec at the SEMA show in Las Vegas this week. I’m saying this because, as has been scientifically proven via years of fifth-grade gym-class conflict resolution studies, if you call someone too chicken to do something, they have to do it. There’s no other option. I’m hoping my strategy works, because Jeep just asked the public if it should build a two-door Gladiator, and now everyone’s hopes are up. Don’t ruin our dreams, Jeep. It’s not worth it.

I just got back from SEMA, where I briefly hung out with the folks at Quatratec, where I often buy Jeep parts when I can’t find them at the junkyard, on Facebook marketplace, or buried in my backyard somewhere. The company has on display a “JTe,” which was built by custom-Jeep shop Unofficial Use Only. I don’t know much about it or its founder Greg Henderson, but I am familiar with some of his SEMA builds, including the YJL:

And actually, I saw Henderson at an off-road event at Rocks & Valleys in Michigan around eight years ago. There, he was auctioning off his TJ Unlimited-Wrangler-based “Frankenbrute” Jeep build for charity:

Anyway, this year, Henderson brought a two-door Gladiator to SEMA, and Jeep has been posting about it on Instagram. 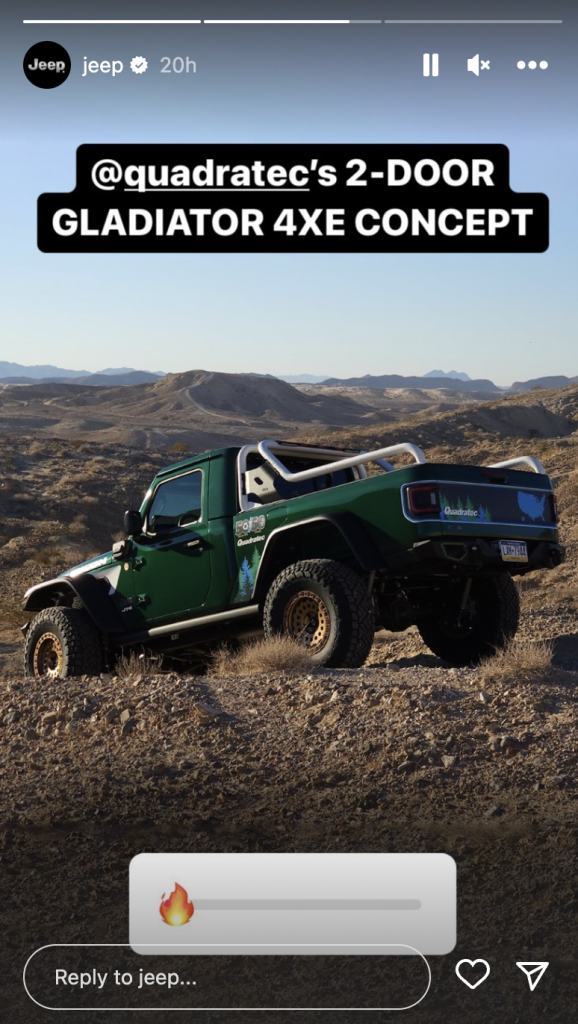 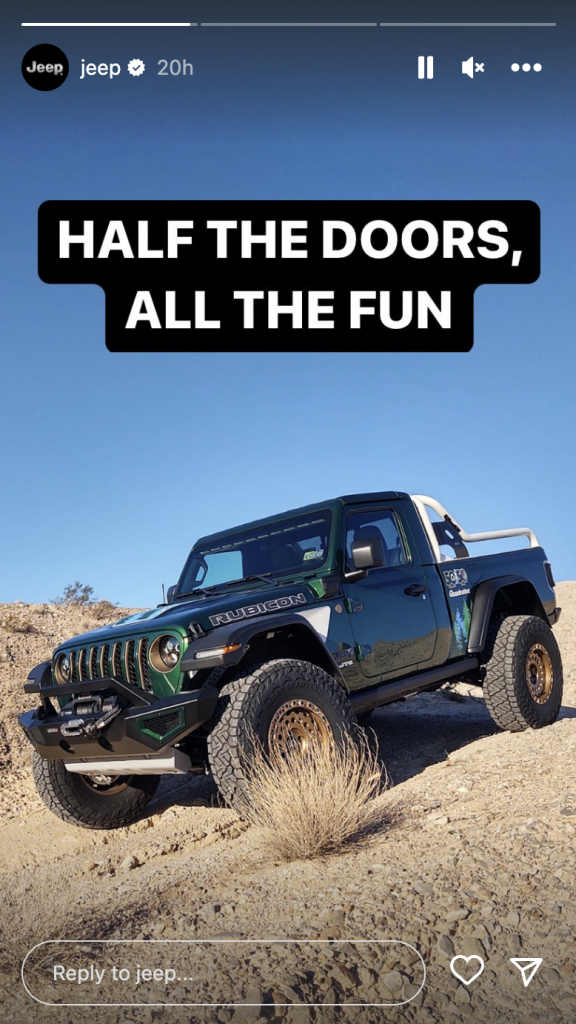 “Half the doors, all the fun,” writes the company in a caption. That’s right, Jeep. You get it! 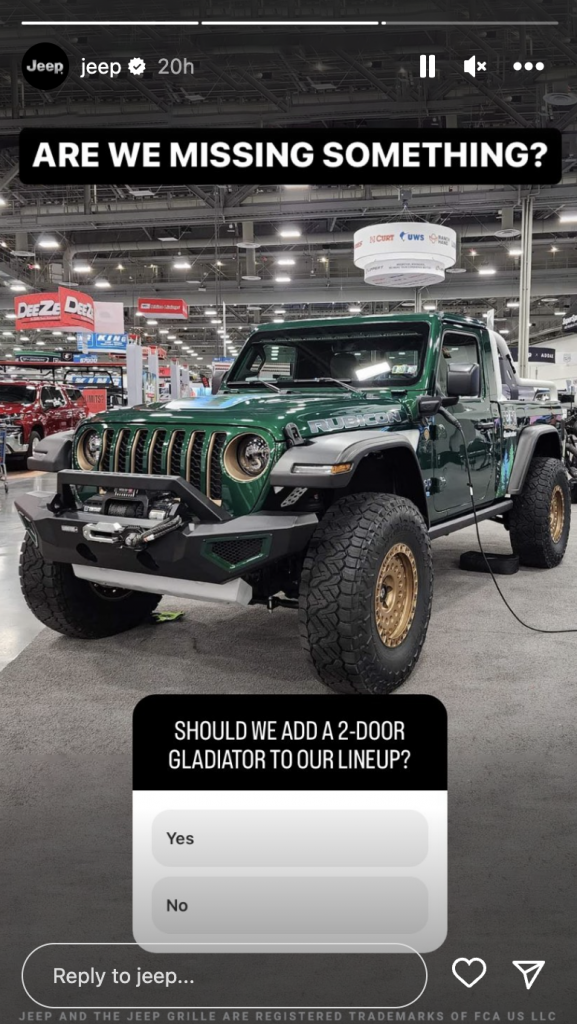 The Instagram Stories post above is the primary subject of this article. “Are we missing something?” the caption reads. “Should we add a 2-door Gladiator to our lineup” reads a poll below.

First off, the answer to both questions is: Obviously! We all know that the four-door Gladiator looks a bit weird around that C-pillar, plus it’s too damn big to be great off-roading. Seriously, watch the Jeep truck try dragging its oversized arse over the Rubicon Trail; it ain’t pretty:

This two-door just looks right, and it’d be the most capable off-road pickup on the market, by far.

I hope Jeep realizes that just asking that question about building a regular-cab Gladiator is dangerous, and I’m praying it wasn’t just posted by a 21 year-old social media intern. These are hopes and dreams we’re dealing with, here, Jeep. If you’re going to ask that question, you better be serious! 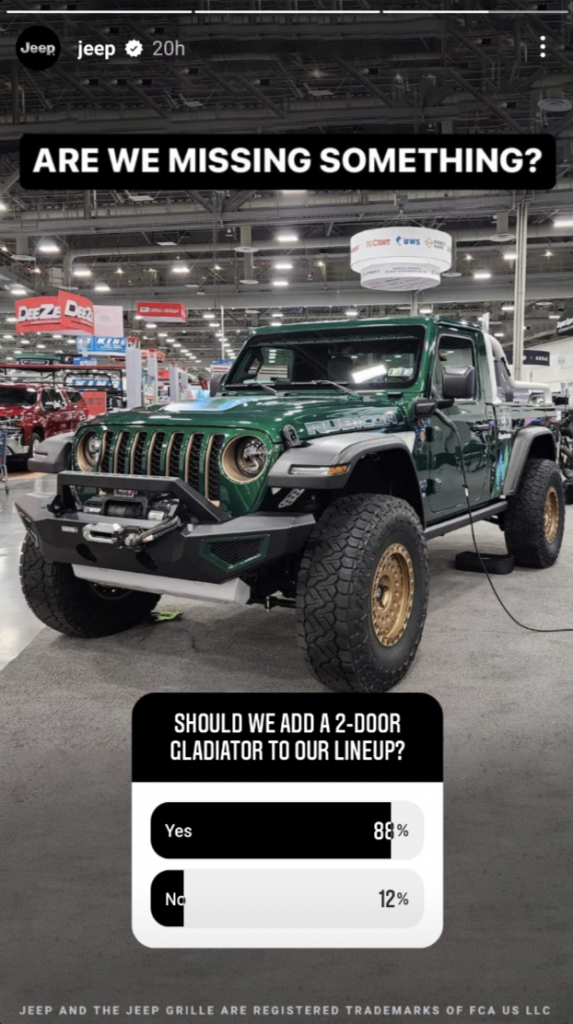 Eighty-eight percent of people are onboard with a Henry VIII Gladiator (get it, Tudor?), though I can’t help but wonder what the heck is going on in the head of the folks in the 12 “no” bracket. Surely they’re just old-timers who don’t know how to work an “app,” right? I hope so; otherwise, they should seek counseling.

Anyway, a bit more about the SEMA truck. The “JTe” actually started out as a plug-in hybrid Wrangler 4Xe Rubicon; it got chopped up, and a stretched version of the factory Gladiator bed was mounted behind the cab. Here, let Quadratec break it down:

Built by renowned Jeep fabricator Greg Henderson at Unofficial Use Only, the JTe began life as a 2022 Jeep Wrangler 4Xe Rubicon, and was cut behind the front doors before a factory Gladiator truck bed and factory Mopar body replacement panels were added. The JTe is clad in custom “Quadratec” green paint by Red’s Bodyworks and has been equipped with top-of-the-line performance parts and recovery gear to transform it into a true, trail clean-up support vehicle.

…its bed is 10.5-inches longer than a standard Gladiator, which will provide plenty of space for Tread Lightly! trail project cleanups over the next two years.”

It looks great both inside and out. Here’s a closer look, via the Jeep parts supplier:

The best part of the Jeep is on the inside — specifically on the doorcards. My friend Liam, a young engineer who may or may not have been involved in the development of the JL Wrangler’s interior door trim, saw a pain point in the JL ownership experience. Specifically, he and many others noticed that the netting on the doors very often got caught on an occupant’s boot as they disembarked from the vehicle. Even when that didn’t happen, storing even fairly-lightweight items in that netting stretched it out, and made it look janky.

So Liam’s manufactured some plastic netting replacements — little storage cubbies that don’t hold a ton, but look great and offer some flexibility. No, not the literal kind like the netting does, the figurative kind since the product has provisions that allow one to snap on accessories. Here, have a look at me shamelessly shilling for my friend:

Anyway, the point here is: JL owners, support Liam by commenting on the Instagram post above if you’re tired of getting your boot caught in your door netting. And Jeep, just build the damn two-door. Offer it in green with a tan top and tan half-door uppers, and the world will be right. Don’t tease us like this.

Rust-loving Jeep man, cofounder and EIC of The Autopian, Jason's friend. Email: david@autopian.com
Read All My Posts »
PrevPreviousThe Adorable Mitsubishi Delica Mini Is Here To Make Your Friday Better
NextHere’s How Someone Turned The Smallest New Car In America Into A CamperNext