It’s no secret that people seem to genuinely love camper conversions. There’s something about turning a vehicle into a house of sorts that hits some weird, deep urges buried within us all. And yet we’ve all seen a heptillion school bus or church bus Econoline or Sprinter van conversions, and we’re getting jaded. We’re like junkies, we need more, and harder stuff. Maybe that’s why this tip sent to us by an Autopian named Jacob is so good: it may be the hardest-core, purest vehicle-converted-to-camper shit we’ve seen, at least in terms of difficulty to result. That’s because the vehicle that this builder started with wasn’t a school bus or a Sprinter or a hearse. It wasn’t a van at all. Or a wagon. Or even a medium-sized sedan. It’s a Mitsubishi freaking Mirage. 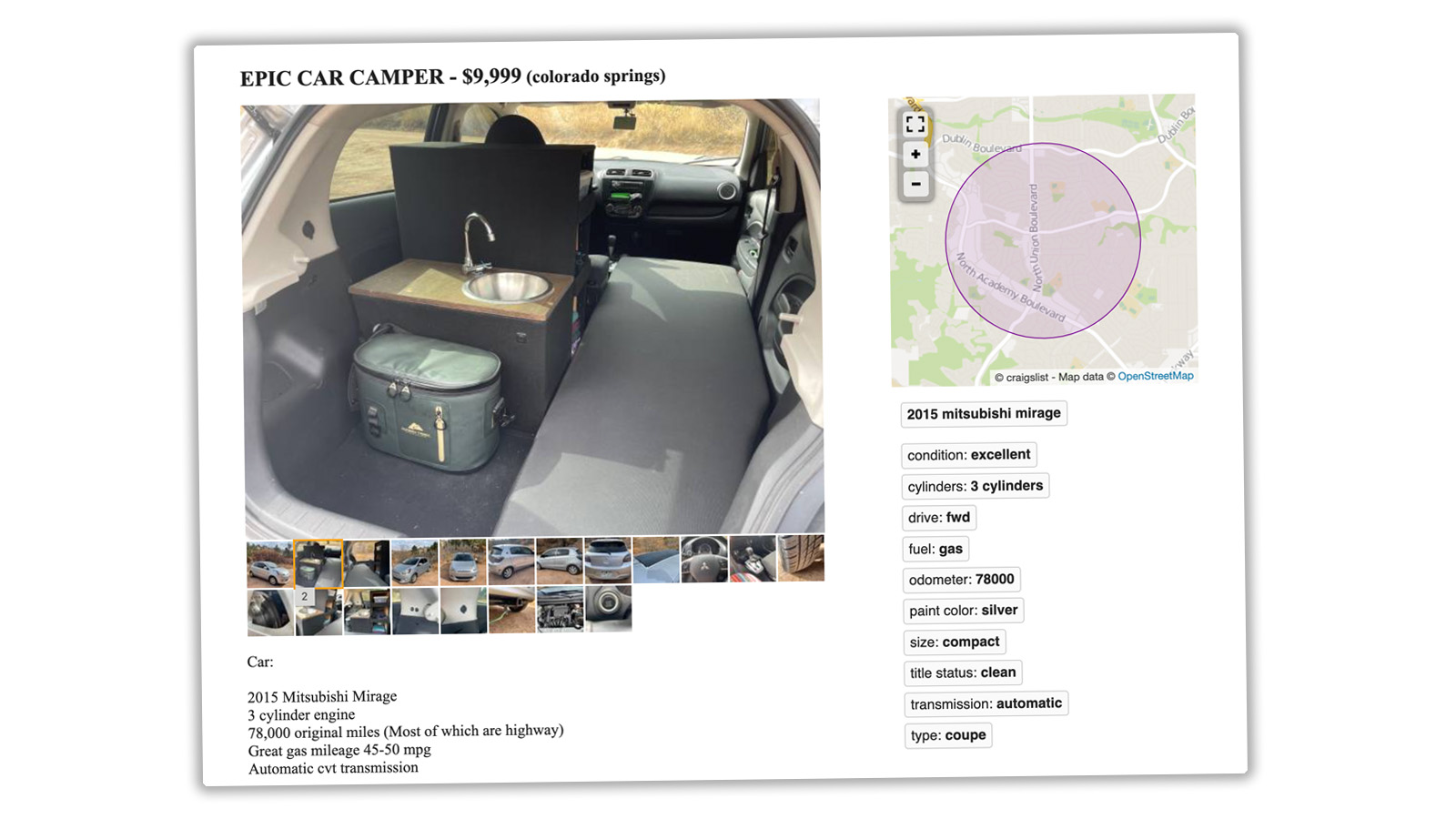 Yes, a 2015 Mirage — in large part the same as the 2023 Mirage (the smallest new car in America now that the Chevy Spark has left this cruel world) — made into a camper, with a sink and everything. I love everything about this, not the least of which is that I have a fondness for the humble little Mirage, a car I reviewed back in the day and, more importantly, came to the defense of when other bigshot car reviewers were taking unfair shits upon this honest little machine. It’s an incredibly unlikely place to start if you’re converting a vehicle to a camper, which is why I really wanted to know the story behind why this thing even exists. To find out, I called the owner, a man named Daniel who works in the commercial building industry.

You see, Daniel used to travel a lot for his work, and his company gave him money for lodging and gas. Daniel soon realized he’d rather have the money than blowing it sleeping in beige, soulless roadside motels, so he decided to try to build his own portable lodging. And, since he was getting gas money, too, it made sense to get something fuel-efficient as well, because if you’re going to sleep in a vehicle at all, you may as well maximize the cash you’ll be saving to do so.

With that in mind, Daniel was first on the lookout for a Prius, but those proved more expensive than he’d like. He then realized that he could get effectively the same fuel economy from a much simpler and cheaper car: a Mitsubishi Mirage. He paid about $10,000 on the 2015 Mirage, which he bought new and expressly for the purpose of converting it into something that could be lived in.

Now, here’s something you should know about Daniel: he knows what the hell he’s doing, and it shows. His commercial building experience has given him plenty of training for building things, and he’s done several van-to-camper conversions already. Plus, he’s solar certified, which was also put to good use here.

That’s why this isn’t just a Mirage with the seats yanked out and some big Tupperware tubs thrown in. This is a real, no-joke conversion, with Daniel stripping the car’s interior down to bare metal so that every new component and fixture that he added would be able to be mounted to reinforced parts of the car, like how the sink and bed units are mounted to the rear seat rails, via steel plates made just for this. 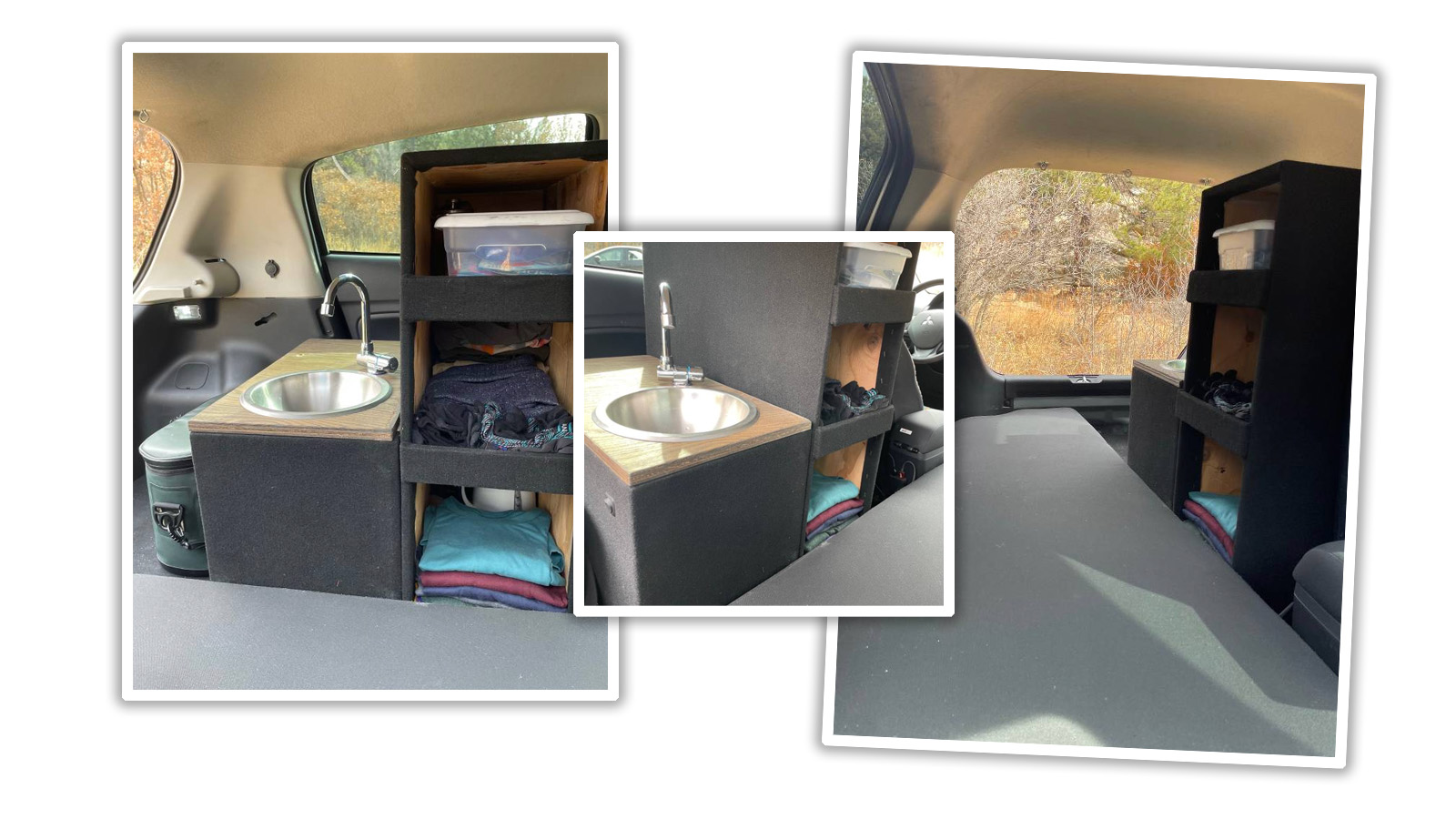 Daniel wanted to retain as much crash safety as possible, so if the car gets rear ended, he doesn’t have to worry about the additional and literal headache of getting a sink smacked into the back of his head. The shelving and sink unit are made from steel, with a wood countertop; there’s no particle board crap in here.

The bed, which can accommodate someone taller than six feet, has a nice memory foam mattress, and all of the electrical wiring is hidden behind the interior trim panels. There’s also a set of custom-made and insulated window covers for privacy and temperature control. 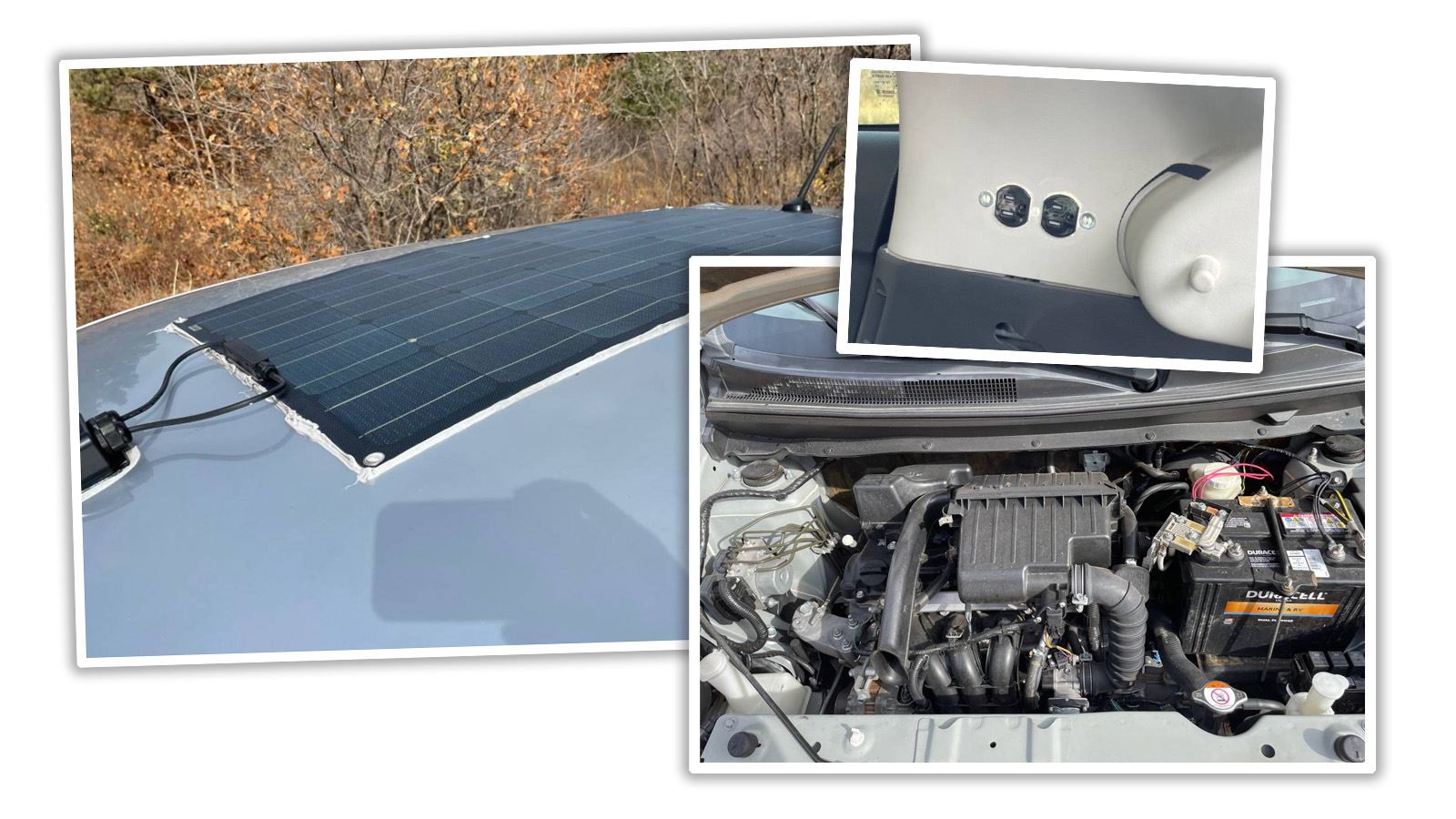 He’s updated that electrical system to include a 160 amp-hour deep-cycle marine battery, and that battery can be charged by the 100 watt solar panel on the roof. Daniel says with good sunlight, it’ll recharge in about four hours. There’s also an external plug to receive 120V “shore power” and 120V outlets inside.

I mean, look how good this thing looks inside! And, incredibly, after adding the sink and bed and shelving and under-bed storage unit and water tank and all that, it came out to be 200 pounds lighter than the stock Mirage, mostly thanks to the removal of the seats and the airbags for the passenger’s seat. 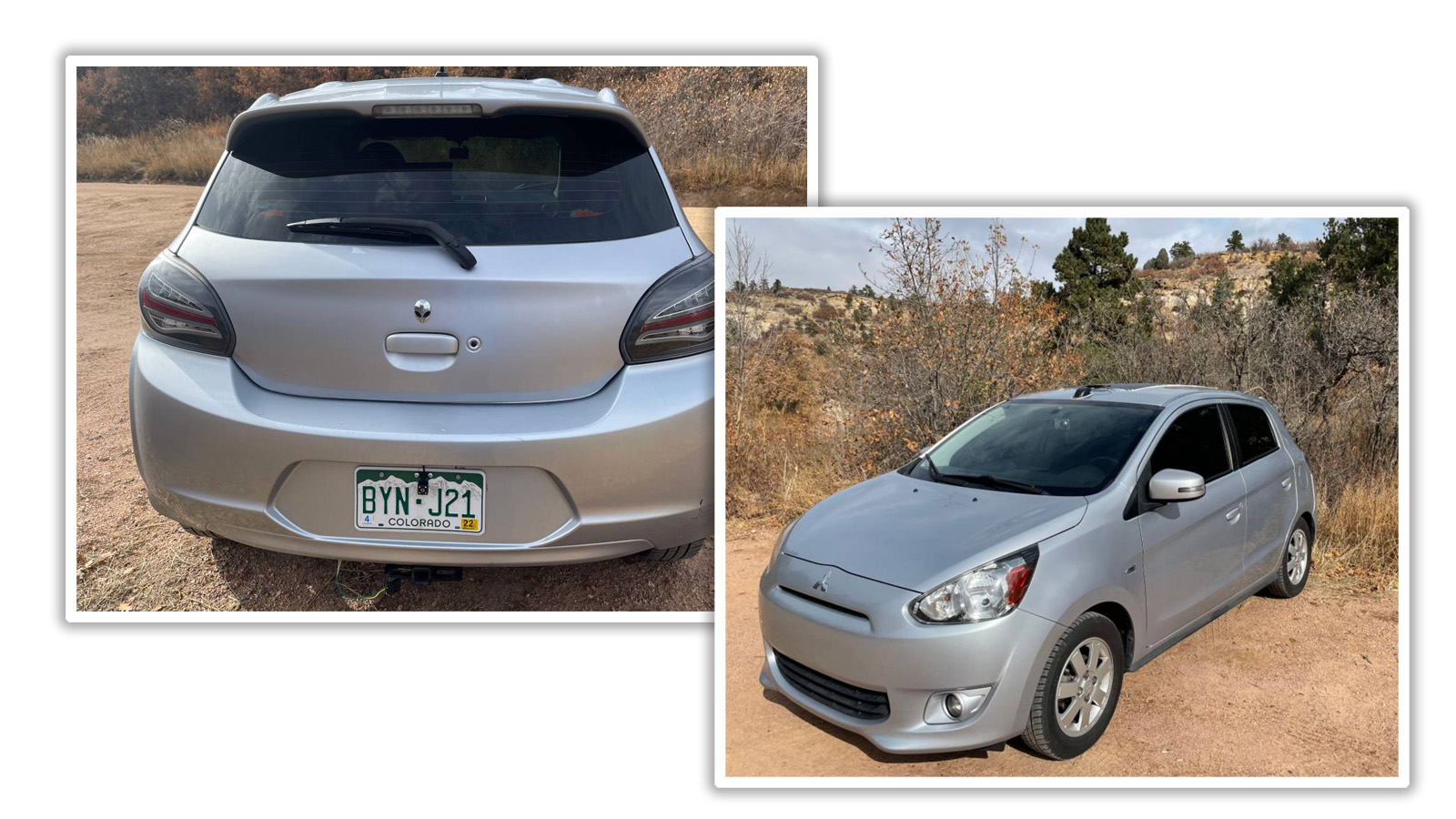 From the outside, it just looks like any old silver Mirage, just with funky LED taillights. Nobody would think for a second someone was in there brushing their teeth and watching a movie before going to sleep in a full-sized bed.

This thing is so tidy and clever and well-packaged I just want to spit. It’s amazing. And Daniel told me it’s extremely usable, too, and that he once lived in it for a ten-day trip. Ten days! In a Mirage! With a sink!

Daniel did all the work himself, and estimates he spent about $4,000 in the process, which he also says he more than made up for with all the hotel and gas money he was able to pocket. He also told me that

“I wanted to test the limits of what a camper could be. This is pretty much it, at least as far as small goes.”

Daniel’s job no longer requires this sort of travel, so he’s selling it for under $10,000, which seems a steal, because where the hell else are you going to get a one-person fuel-efficient camper that’s engineered and built as well as this? Nowhere, that’s where.

Incredible. Someone buy this and then tell us all about how you’re using it, please.

I'm a co-founder of the Autopian, the site you're on RIGHT NOW! I'm here to talk to you about taillights until you cry and beg me to stop, which I absolutely will not. Sorry. Hug? Also, David's friend.
Read All My Posts »
PrevPreviousJeep Asks Customers If It Should Build A Regular Cab Gladiator Like This ‘JTe’
NextThis Flxible Visicoach Used To Be An Airport Bus, Now It’s A Steal Of A Motorhome DealNext