This Flxible Visicoach Used To Be An Airport Bus, Now It’s A Steal Of A Motorhome Deal

In recent times I’ve been waking up to various rusty vintage buses in my inbox sent by you dear readers. I love looking at these rigs and dreaming about reviving them for an epic road trip. There’s so much bus history to be found just sitting for sale across America. I found another cool bus for sale, and this one seems like a pretty good deal if you don’t mind just a little bit of work. This 1956 Flxible Visicoach got Chicago area travelers to the airport, but today, it’s a complete vintage motorhome for just $22,500.

Loving buses is a bit like having a curse, because it’s much harder to stuff away a 35-foot monster than it is to store all five of my Smarts combined. And worse, everything is just a bit more expensive when it goes into a vehicle weighing at around 17,000 or more pounds. My lovely enabler wife tells me to wait just a little longer, as we’re hopefully soon moving into a place with lots of space. That may be true, but I fear adding a second bus to the fleet more than my Volkswagen Touareg V10 TDI breaking. But it can’t hurt to window shop, right? 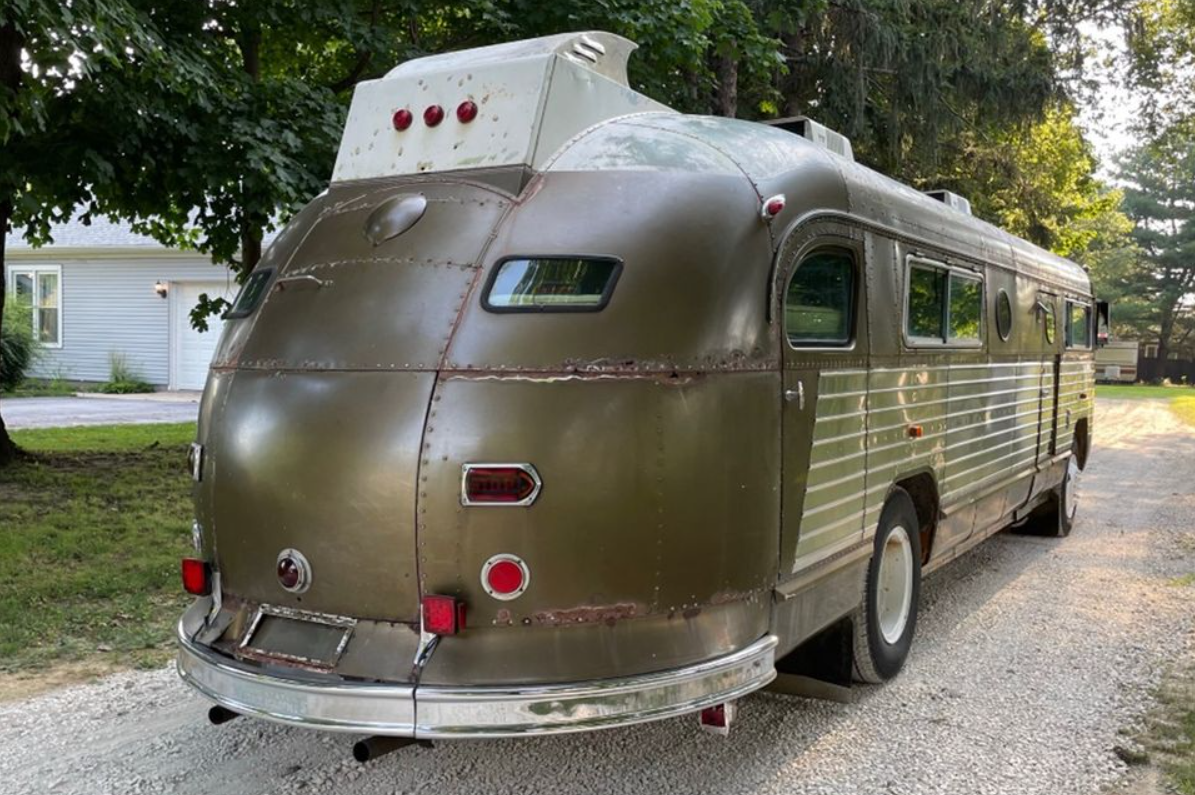 I’ve written about the history of Flxible before, but I’ll give you a quick recap. The company started life in the early 1910s building flexible sidecars for motorcycles. When it came to trademark the company name, the company reportedly found that it couldn’t trademark the word “flexible.” So, the company dropped the first “e” and trademarked the resulting name, “Flxible.” Building sidecars lasted until the early 1920s, when cars like the inexpensive Ford Model T ate into the more expensive sidecar’s sales. Eventually, Flxible ditched the sidecar business entirely, and focused on building all sorts of buses. Flxible built intercity coaches, as well as bus-based ambulances and hearses, too.

Over the decades, Flxible would be known for building absolutely gorgeous buses. One of Flxible’s most beautiful buses was the Clipper, a bus that by the 1940s evolved from a coach that had a body that was supported by a wooden frame, to a full unitized metal body featuring fabulous curves and stylish parallelogram windows. Remember the vintage red bus from the movie RV? Yeah, that beauty is a Flxible Clipper!

In 1950, Flxible followed the Clipper up with the Visicoach. The buses were similar in design, but the Visicoach gained three additional inches of interior headroom and an engine bay a foot longer. That bigger engine bay allowed for a wider variety of engines and they were even mounted on a sliding drawer for ease of repair. The variety of Visicoach engines ranged from Buick Straight-8 engines to Fageol Twin Coach units, Hall-Scott engines, White engines, and Cummins powerplants.

Earlier this year, I wrote about a 1954 Visicoach that provided tourists a scenic ride through Mount Rainier National Park over 68 years ago. That bus featured incredible roof windows that allowed tourists to see the scenic beauty right through the roof. This 1956 Visicoach doesn’t have those windows, but it’s also far cheaper. That 1954 Visicoach is still for sale for $64,995. This one? It’s just $22,500. 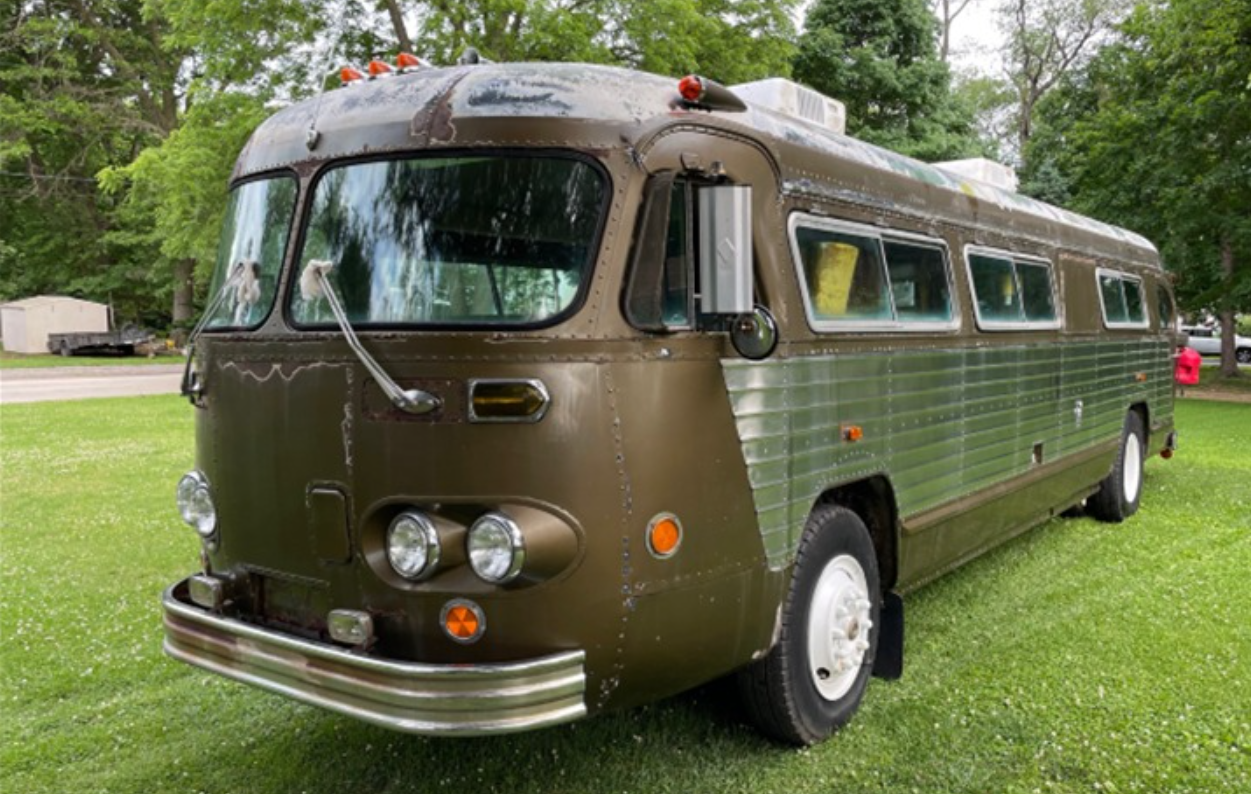 Then sometime in the 1970s, it was converted into an RV. During the conversion, the side door was moved to the middle. And the bus was filled out with all of the amenities that you’d come to expect from an RV. It has two roof-mounted air-conditioners, a refrigerator, shower, sink, stove, shower, and toilet. There’s also sleeping for six people. The quality of the work looks so good that it’s easy to forget that this 35-foot bus once carried people to the airport. There’s even a 7.5 kW Kohler generator onboard. 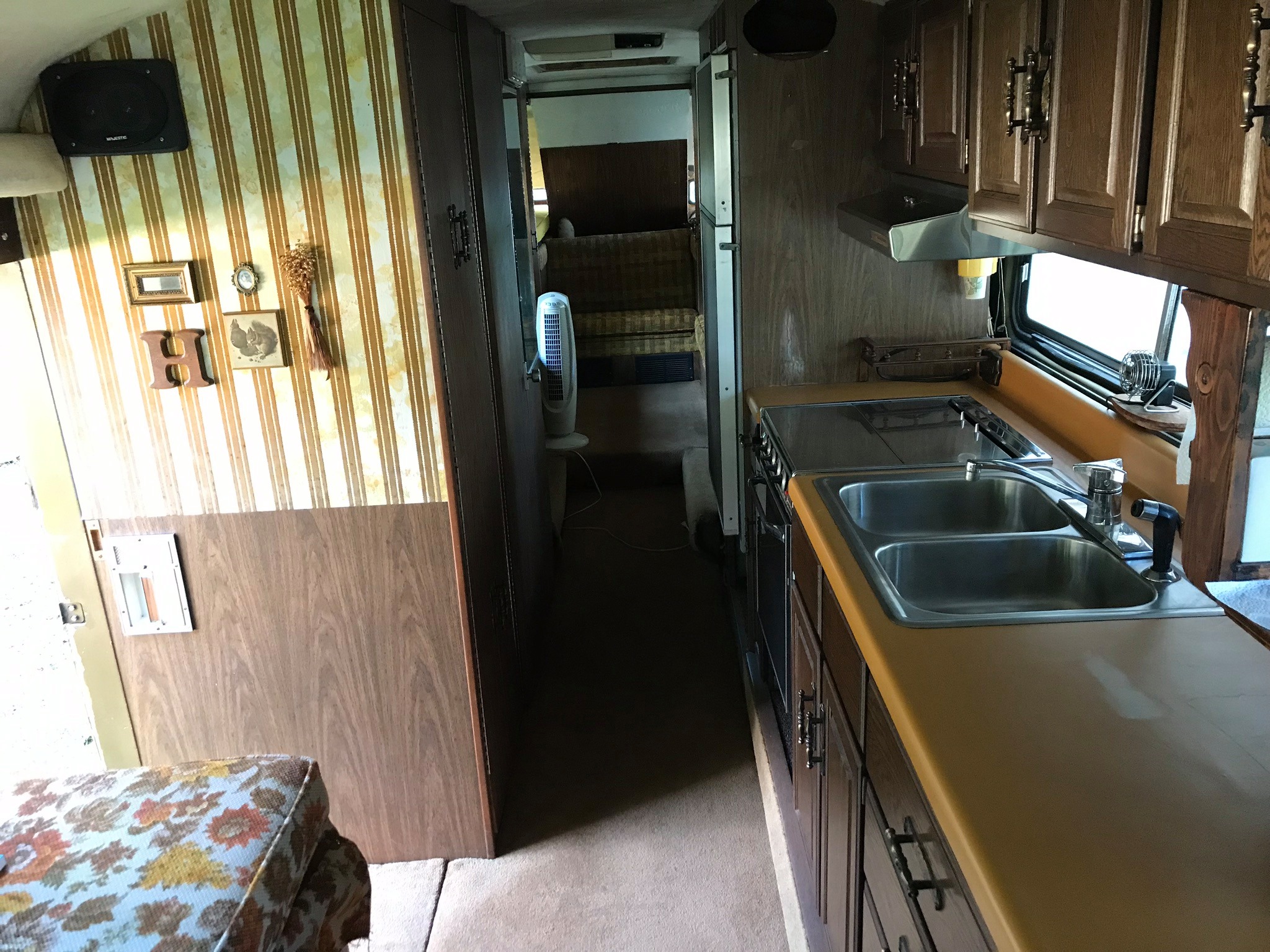 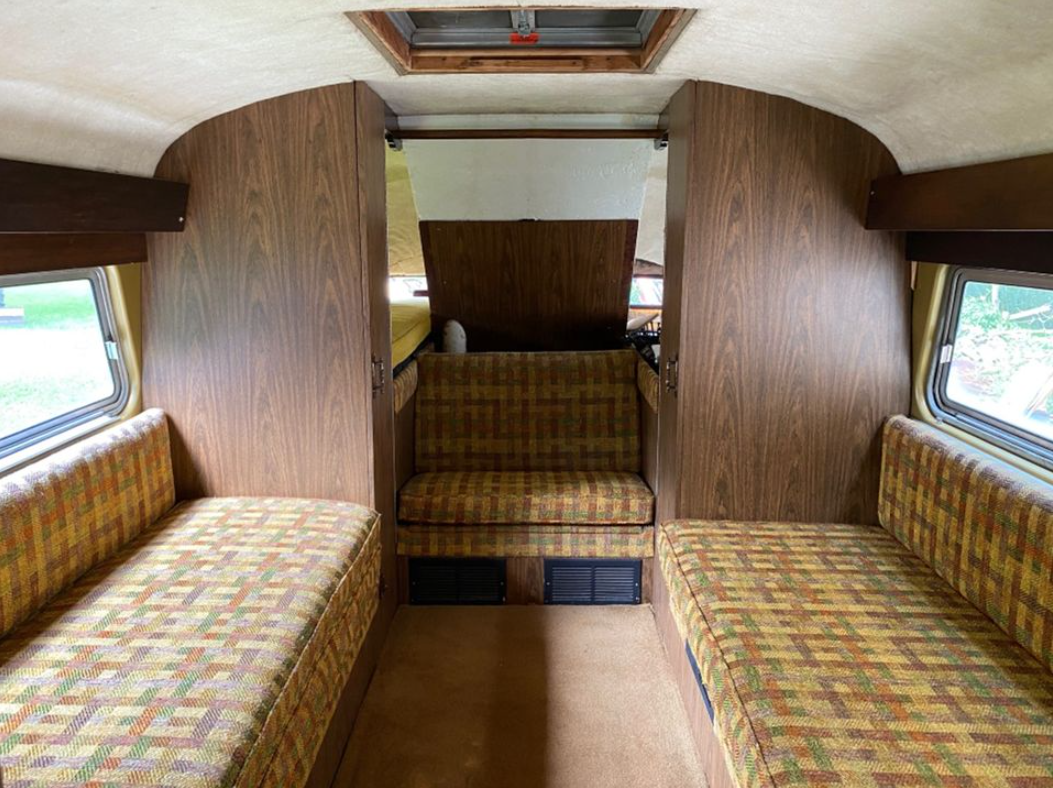 Located in the rear is a 427 cubic-inch Chevrolet V8 noted to be from the early 1970s. It isn’t said where this engine came from, but 427s in the early 1970s made about 260 net HP. So, I wouldn’t expect this bus to be fast or efficient. The good news is that this engine was recently rebuilt. And you don’t have to worry about the maintenance of a diesel engine. Power gets to the rear wheels via an Allison MT-40. Stopping is handled through air brakes.

Unfortunately, total mileage is unknown. The meters on the hubs say 134,399 miles, while the replaced odometer says 61,561 miles. 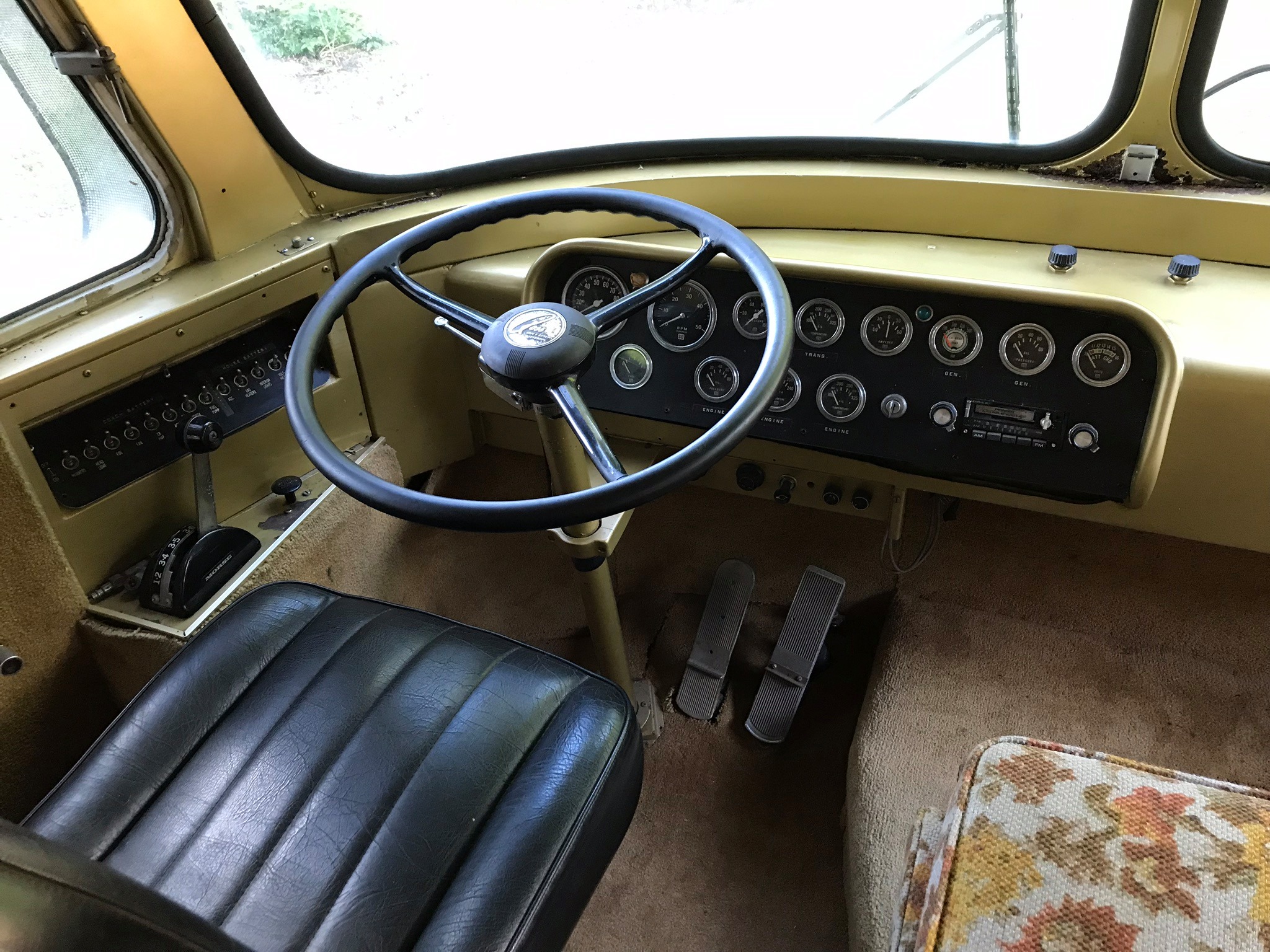 At least to my eyes, its overall condition is pretty decent. The stainless steel sides still shine, and the paint looks ok in most areas. But, its life in the Midwest is evident in what appears to be minor rust. And of course, it still has an interior that’s a good 50 years old. The seller says that you’ll probably want to refresh the equipment, or replace it with more modern gear. I’d preserve it as-is; this bus is a time capsule of what RV conversions looked like a half century ago! It’s hard to say what an old bus is worth. Buses often sell for basically nothing in auctions, but bus fans will pay a lot for a rare unit. It seems like a steal to me if you’re looking for a running and driving Flxible that could in theory be used right now.

If you want to do some bus stuff, it’s $22,500 in Sidney, Illinois. And on that note, if you happen to know of any vintage buses for sale like an old GM New Look, another Flxible, or more obscure brands, drop them in my inbox. I’d love to see them! 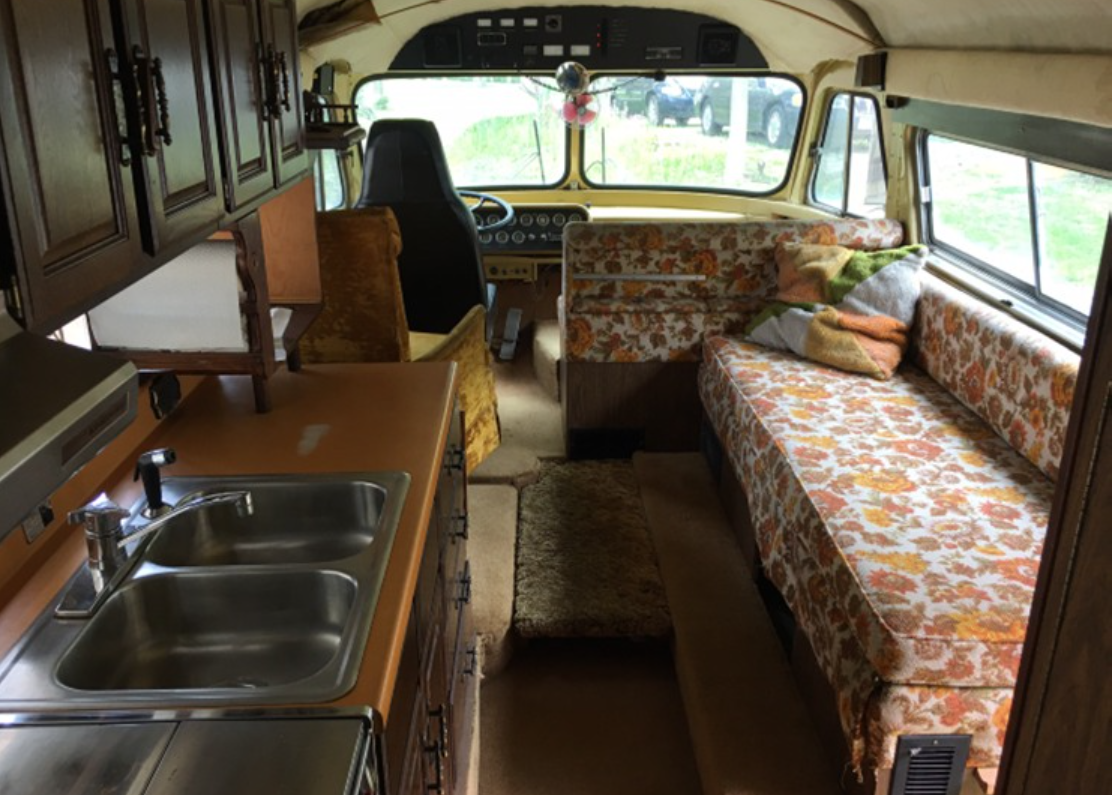 (Photo credits to the seller unless otherwise noted.)

Mercedes is a lifelong fan of all things powered by an engine. When she isn't driving one of her five Smart Fortwos or her 14 other vehicles she could be found in the cockpit of a Cessna 172 or perhaps swimming in any body of water that she could find. She also has a deep love for buses of all kinds. Please send her buses. mercedes@theautopian.com Instagram: @mistymotors Twitter: @Miss_Mercedes30 Facebook.com/neonspinnazz
Read All My Posts »
PrevPreviousHere’s How Someone Turned The Smallest New Car In America Into A Camper
NextMazda RX-7 FD, Buick Super Riviera, Honda CBR250RR MC22: Mercedes’ Marketplace MadnessNext