After four and a half years of living in a tiny apartment, I’m ready to get out of here and into a house of some kind. My wife and I have started searching for a home with lots of land and a huge structure to store the 19 or 21 vehicles I have. After some searching, I think I found some budget gearhead heaven, and one property is basically a personal airport complete with a home, two-car garage, hangar, and a landing strip!

As some of you have already noticed, I’m officially married! Sheryl and I tied the knot on October 1 inside of the Experimental Aircraft Association Museum in Oshkosh, Wisconsin. In planning our wedding, we found that EAA was far cheaper than more traditional venues. For the price of $5,000, we rented an entire museum filled with aviation history. 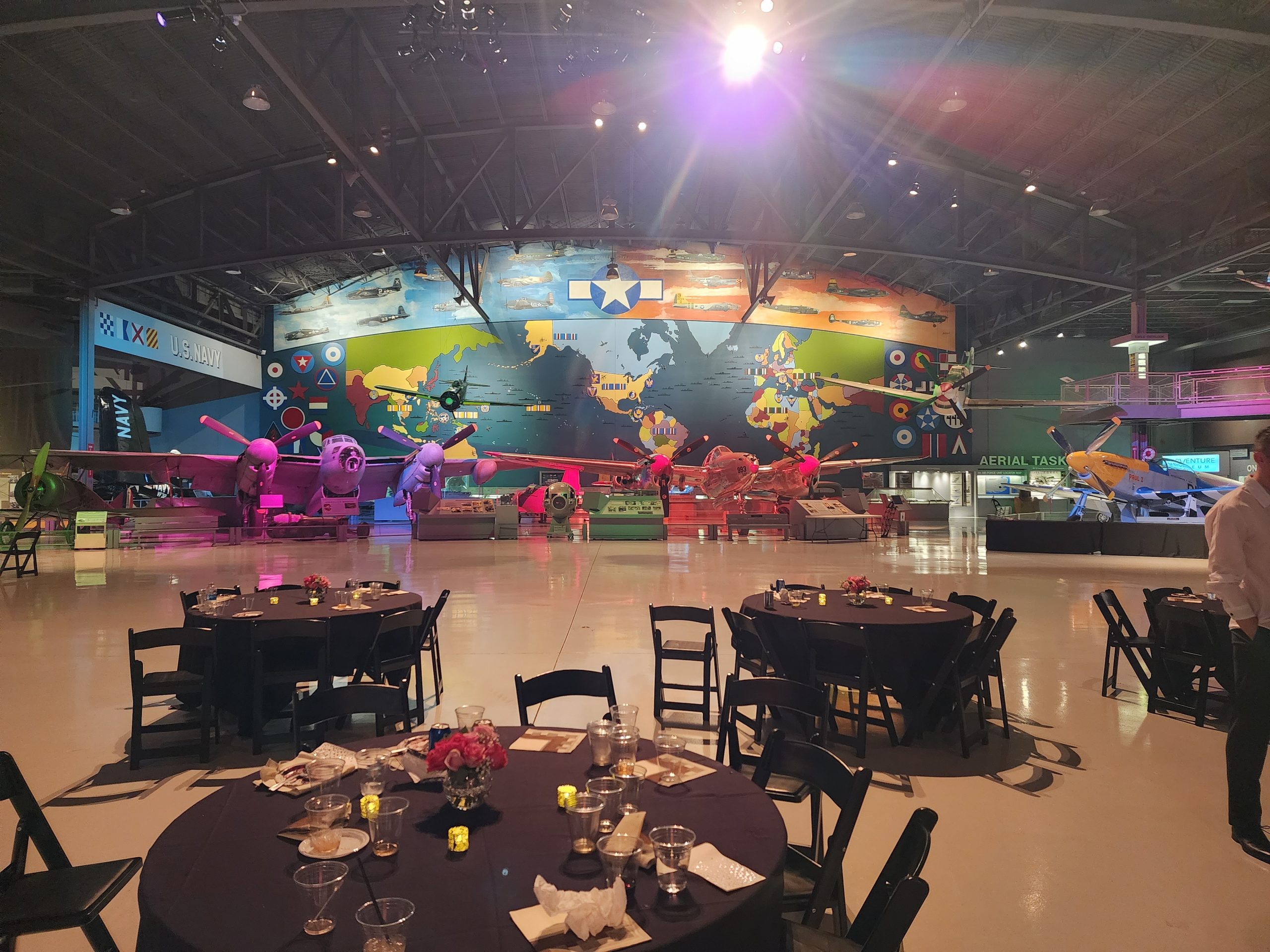 Our guests got to walk around and learn about planes while having some cold snacks. You’ll definitely hear about this venue when the real pictures come in, but if you’re looking for an inexpensive, vehicle-themed wedding venue, consider a museum.

Now that we got that huge event in the books, Sheryl and I are now looking to move out and spread our wings. There’s nothing wrong with my apartment; my rent has gone up just $100 over all of this time, which is rare in my area. It even has semi-modern appliances and enough space to store car and motorcycle parts.

Heck, there’s a whole Honda Spree in my living room! 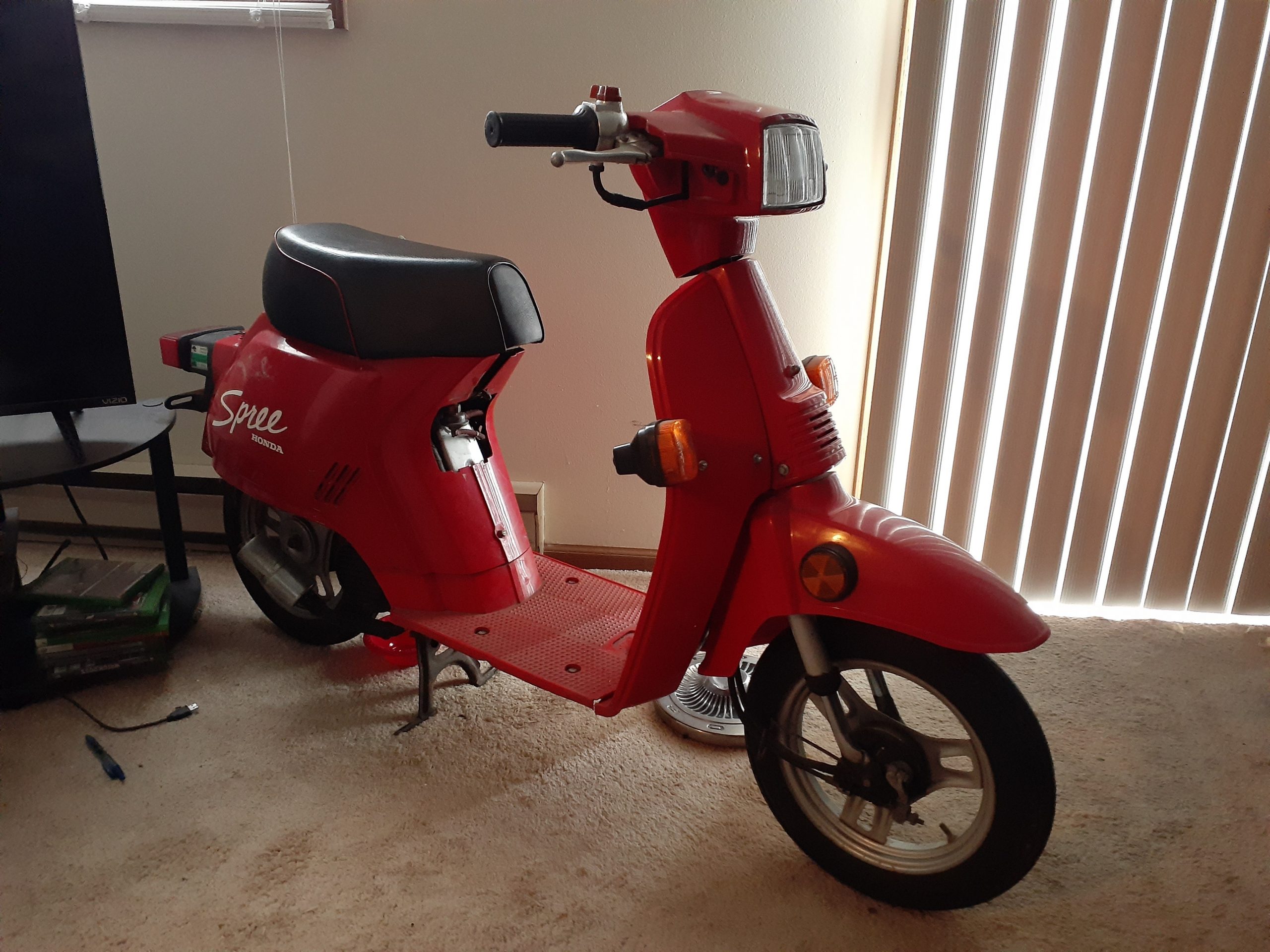 But things started feeling cramped when Sheryl moved in during 2020. Somehow, it seems like our space got smaller, even though it realistically didn’t. And when I moved in, I had just three cars and two motorcycles. Now I rent out a bunch of spaces in Illinois and one in Wisconsin. So, we’ve definitely grown out of this place. Thankfully, Sheryl and I will soon be in the market for a house, and we’ve started looking at what’s out there.

Amusingly, Sheryl and I have two vastly different desires. I want a place that could conceivably store most of my vehicles, and I’d love for that place to be somewhat secluded, away from a homeowners association. My vision for this is essentially a country home with a massive pole barn. Meanwhile, Sheryl would like a place with a better kitchen than the one we currently have. And she’d like to have a home office, as well as a room just for our little conures.

Thus far, searching for this type of property has been quite fun. As it turns out, there are tons of properties for sale offering outbuildings and extra garages, perfect for storing cars. Some of these properties are quite incredible. Check out this one in East Peoria, Illinois.

It comes with a pond and an artsy home, plus a pole barn that would fit my RTS bus with room to spare. I’d love to sit on the park benches next to the pond and watch the sunset. And for a gearhead, this place is just a lift, a heater, and some shop air away from being perfect. And it’s $324,900, which could be worse! But we can do better.

At some point, my house search gained “airport” as a search term. Now, this was done mainly as a joke, but to my surprise, you can buy entire airports. Most of these things cost in the millions, but there are a few private properties out there with their own landing strips. Here is where we’re finding car nirvana, a carvana, if you will.

Located in Jackson, Michigan about an hour outside of Detroit, sits one awesome property. The listing on Trade-A-Plane starts off by saying that you get a whopping 28 acres. And on that property, you get a four bedroom house with three bathrooms. The house is over 50 years old, and it definitely shows its age. The kitchen could use some updates, as could the exterior.

That’s nice enough, but this property is absolutely perfect for vehicles. First, as aerial views show, the house has a very long drive and tons of land obscured by trees. Not only do you have loads of space for cars, but you can wrench without neighbors staring you down.

Attached to the home is a two-door “oversized” garage. It’s unclear how large that garage is, but it’s at least two cars, probably more. Located behind the house is something special. Built at some point in this house’s past is a 40-foot by 40-foot hangar. That was built to store a plane, which would take off from the property’s own private air strip.

Oh yes, this property comes with a 2,100-foot grass runway. So not only do you have plenty of space for cars, but you have your own personal airport! The seller says that high performance aircraft have used this strip before. I bet it would be perfect for a cool little plane like a Cessna 172. And that’s not all. Since we’re talking about 28 acres here, there’s a wooded area that apparently can be used for hunting and it comes with some frontage on a nearby river.

If you’re not into flying, I see another opportunity for this place. You could probably set up your own personal dirt track or backyard mud pit. Vehicle tracks in satellite photos seem to suggest that may be what this place has been used for in recent times.

Perhaps the biggest surprise to me is that you get all of this for $489,900. Sure, you have to live in cold, rusty Michigan, but there’s so much room for activities! And you’re right by Detroit, where you’ll see all kinds of awesome cars in the summer. If it weren’t for the fact that we’re still waiting a little bit on the money, I’d be telling Sheryl to light up the seller’s phone.

Alternatively, maybe aviation isn’t your thing? There’s another property that’s been pulling on my heart strings. Located in Annawan, Illinois is a property with an unexpected feature. The house is fine, with three bedrooms and a single bath. It would definitely need updates as it doesn’t even have a dishwasher, but the home would definitely work for our needs.

This one is gearhead nirvana, but for different reasons. Walk outside and you’ll spot three outbuildings. The sizes of these buildings isn’t noted. Sadly, we don’t get a peek inside of anything but the home, too. But the outbuildings are all pretty big with large doors. And this property is perhaps even better than the last because it’s even further from civilization.

One of those outbuildings is noted to be a former car body shop and other a garage. Alright, so there’s your workshop right there, plus additional car storage.

But here’s the kicker, apparently you get a 20-unit storage complex with the purchase. Each unit measures in at 10 feet by 20 feet. The seller is renting the units out for income, which is pretty neat. But what I see here is 20 extra covered parking spaces on top of the three other outbuildings. Or you could modify the complex and have yourself a huge warehouse.

Sheryl says that she wants to start collecting forgotten front-wheel-drive cars from General Motors. So we definitely want a lot of space. This is another place that I wish we could get right now before someone else does.

I’m really excited for the coming future. Hopefully, I’ll soon be out of this apartment and away from people who like to accuse me of stealing my own cars or of running an illegal car dealership. No, I just have a lot of crapboxes and nowhere to put them! But with an airport or a whole storage complex in our hands, we can have everything under one roof.

Do you know of any cool gearhead properties that won’t require millions of dollars and a kidney? I want to know!

Mercedes is a lifelong fan of all things powered by an engine. When she isn't driving one of her five Smart Fortwos or her 14 other vehicles she could be found in the cockpit of a Cessna 172 or perhaps swimming in any body of water that she could find. She also has a deep love for buses of all kinds. Please send her buses. mercedes@theautopian.com Instagram: @mistymotors Twitter: @Miss_Mercedes30 Facebook.com/neonspinnazz
Read All My Posts »
PrevPreviousThe Average Car Dealership Employee Made Over $100,000 Last Year
NextAn EV Battery Engineer From A Major Carmaker Explains Why Flooded EVs Catch On FireNext