A few days ago, I saw something pretty magical while driving. It was something uncommon, almost extinct, yet attention-hungry, like a panda dressed like Captain Kirk, blasting a couple of air horns. It was something I can honestly say I’ve never actually desired, but something I am absolutely delighted once existed. We’re also far enough away from the time period when it existed that it feels almost like a strange fever dream, and I have to remind myself that, yes, this was a real thing, once. It was a Plymouth Prowler. With the optional matching trailer.

Go ahead. Laugh. Sneer, even. I don’t care. I saw this thing on the road and I craned my neck around to follow its passage like a dog locks on a meatball in your hand. 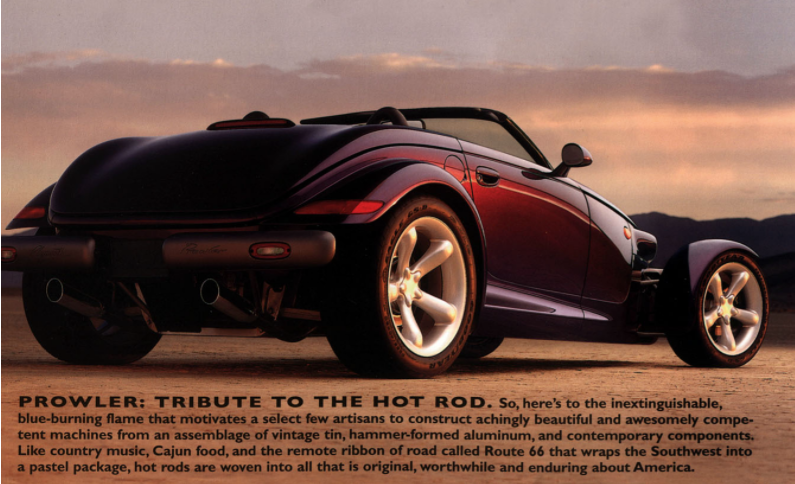 Keep in mind that this is not a car I’d ever really want to own. If you were to take the demographic portrait of whom the 1997 Plymouth Prowler was designed for and held it up to my bare skin, it would probably burn and sizzle sickeningly, like a silver cross on a vampire’s chest. It’s not a car for me. I’d look and feel like an absolute fool plopped into that bucket-like body, but, again, I simply don’t care. I absolutely, unashamedly adore that this ridiculous thing existed, and when I saw that orange one zipping down the road, hauling equal parts ass and that remarkable trailer, all these feelings came rushing back, made all the more poignant because the flag this car sailed under, Plymouth, is gone.

Do you remember the trailer I’m talking about? It looked like this:

Remember that? Those trailers that you’d sometimes see behind Prowlers, shaped like the rear quarter of the car, sort of like if you had a roller suitcase shaped like your own ass, but, you know, cool.

Here’s the incredible thing about those Prowler trailers: you could buy them from your fucking Plymouth dealer. This wasn’t some bit of bonkers aftermarket madness, this was a goddamn $5,000 factory option.

Have any other carmakers sold a matching trailer for their cars, through their dealers, before or since? No, they haven’t. And Chrysler didn’t half-ass this thing, either. It wasn’t just some fiberglass eggshell on wheels, this was a real, full featured trailer, technically known as the Ajax trailer, with a fully carpeted interior (which you can still buy replacements for at places like this), lighting, a license plate mount, all so you could have Crown Vic-level trunk space on your tiny two-seat hot rod fantasy. 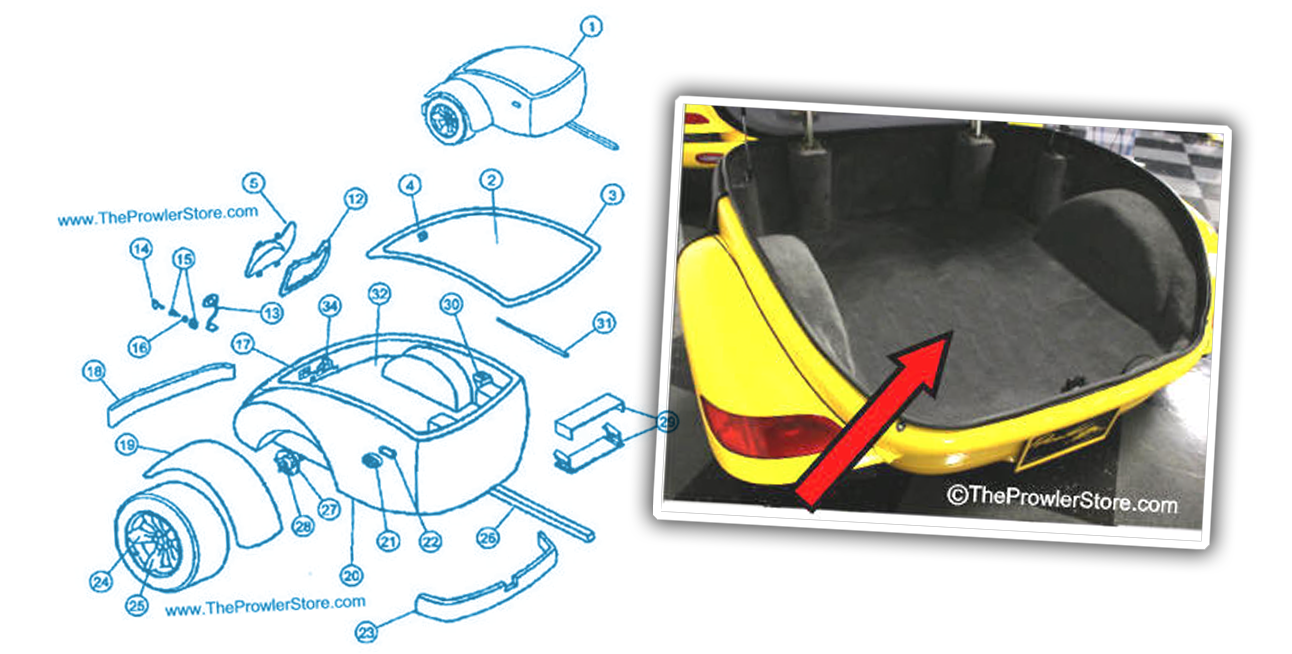 And, in case this somehow isn’t enough, it’s worth noting that the tow hitch setup on the Prowler was designed exclusively for this specific trailer; it’s not like you could haul your jet ski with the Prowler if you wanted. The hitch was good for a 1000 pound trailer with brakes, but if that was anything other than the official Prowler trailer, you’d void your warranty.

Of course, I suppose you could take a less-charitable look at the trailer, because without it the Prowler’s luggage accommodations were really pretty bleak: 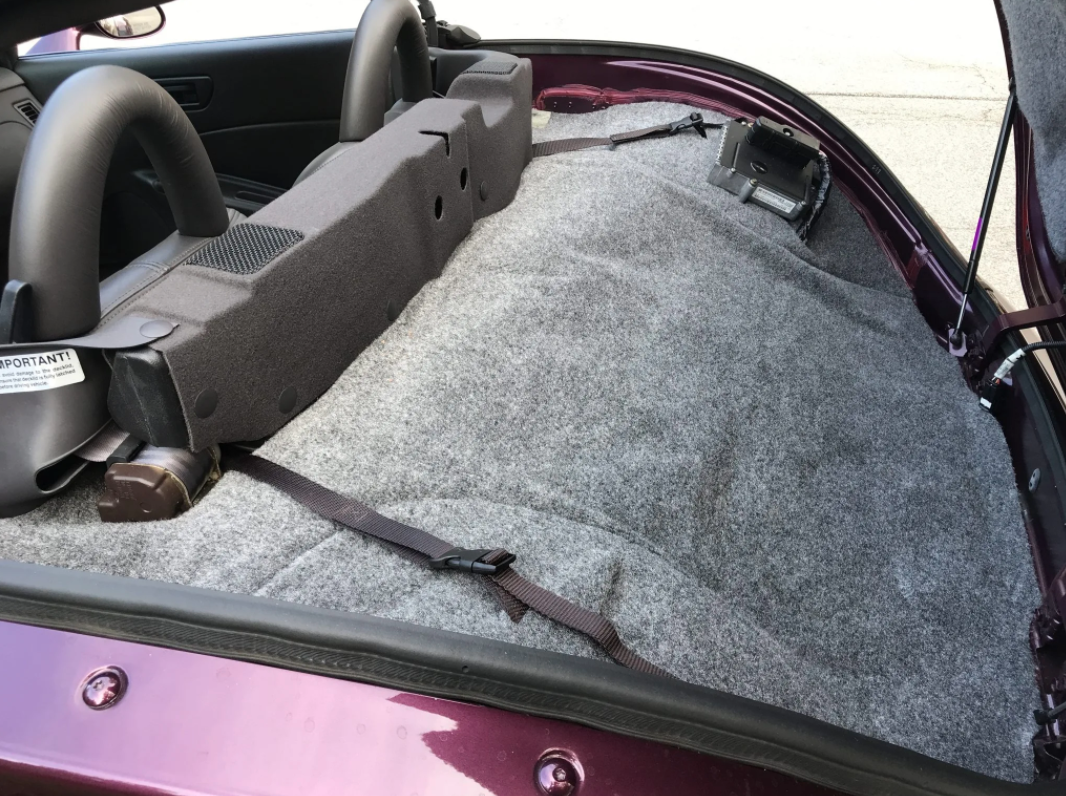 Remember, the convertible top folded under there, so with the top down you were left with this carpeted hillock that really couldn’t hold much more than a couple pizza boxes sitting at the worst possible angles, and maybe a folded jacket or two.

But let’s get back to the Big Picture of the Prowler and just think about what this all means, just for a second; think it through, here. Plymouth, division of Chrysler, one of the members of the Big Three automakers, the same company that crawled and scrambled its way out of bankruptcy with sensible minivans and rational, boring shitboxes known as K-Cars not a decade before this thing, was now targeting a demographic that could charitably be called “Old Dudes With Some Money Who Are Kinda Batshit,” and boy were they giving it their all here.

The Prowler had some interesting engineering, which I’m happy to tell you about (I’m not, really, but David insisted, telling me, bitchily, “what’s the platform? what’s the suspension? Talk about the engineering a bit. This isn’t that entertaining, so make it informative” even though the whole point of this article is that the Prowler is beyond such mundane, rational concerns as “engineering,” but, whatever).

[Editor’s note: Sorry, Jason. I just needed to see that chassis pic below].

I mean, he’s not wrong, there’s certainly some interesting stuff going on here engineering and design-wise: those open front wheels, for example. I can’t think of a single other mass-production car that had an exposed double-wishbone front suspension like that, with fenders that moved with the wheels.

The chassis was light aluminum, and featured the transmission at the rear, fed power by a torque tube, like a C5 Corvette or a Porsche 944. Lots of adhesives were used in construction, and the end result was lightweight and had a perfect 50/50 weight distribution. This is all incredible because this was a completely bespoke platform–it’s not like other limited-niche, very specifically-styled cars like Nissan’s wonderful Pike cars, which also had striking retro designs, but were based on Nissan’s mass-market Micra city car. The Prowler was a much more significant lift for Plymouth.

Prowlers came in colors like that grape soda purple and vitimin-urine yellow and chili grease orange. They had a just so-so V6 engine (it made an even then just okay 214 hp, though a 253 hp option came in 1999) and a miserable four-speed automatic, they wanted to crank whatever K-Tel garbage they remembered playing on their Hi-Fis when they were 18 and tear ass all around the country, hence the need for the trailer to carry all their satin jackets and bottles of gin or stacks of vintage Oui magazines or whatever the hell Prowler drivers deemed necessary for a long-ass road trip to nowhere.

Of course, Chrysler’s purchasing team couldn’t lift that much, which is why the Prowler’s engine came from regular old Chrysler Intrepids and most of the interior switches and other bits were right from the parts buckets. Did this make more sense than using an existing platform with a better engine and unique interior parts?

Thank fucking every magic god for Plymouth and this wonderful last bellow of life before the division expired in 2001. And yet, I feel like a lot of people treat the Prowler like they treat Guy Fieri — with undisguised contempt, even though, objectively, he’s a great guy who does good things. You’ve all seen the standup bit about Guy Fieri defense, haven’t you? If not, here you go:

He’s right, of course. And I’m pretty sure you could search-and-replace “Plymouth Prowler” for “Guy Fieri” and the bit would still work. Well, maybe not for the altruism stuff; I can’t recall any Plymouth Prowlers being especially charitable.

You don’t have to like the Prowler. But, if you don’t look at the fact it existed with admiration and wonder, you’re just doing life wrong.

We live in an automotive era full of wonderful things, fantastic technical developments, where even the most mundane family crossover could absolutely spank most of the sports cars of our pasts. And yet, at the same time, for all the inane lip service carmaker PR teams give to the ideas of “driving satisfaction” or “performance-bred” or “dynamism” or the constant references to some bastardized idea of DNA, no modern company has the ‘nads to build anything as remotely bonkers as the Prowler was.

Sure, every carmaker is working on some EV crossover that has a face like an alien who found out their spawn-mate has been cheating on them with you and can go from 0 to 60 in three seconds, but nobody is making absurd little two seaters with the option to become absurd little six-wheeled (you know, with that trailer) purple backroad screamers.

No carmaker is undertaking the daunting engineering efforts that went into making those crazy coat-hanger-shaped bumpers meet federal crash standards, because sometimes Capitalism doesn’t have time for fun bullshit.

Especially if the end result looks like this gleefully cross-eyed fella here: 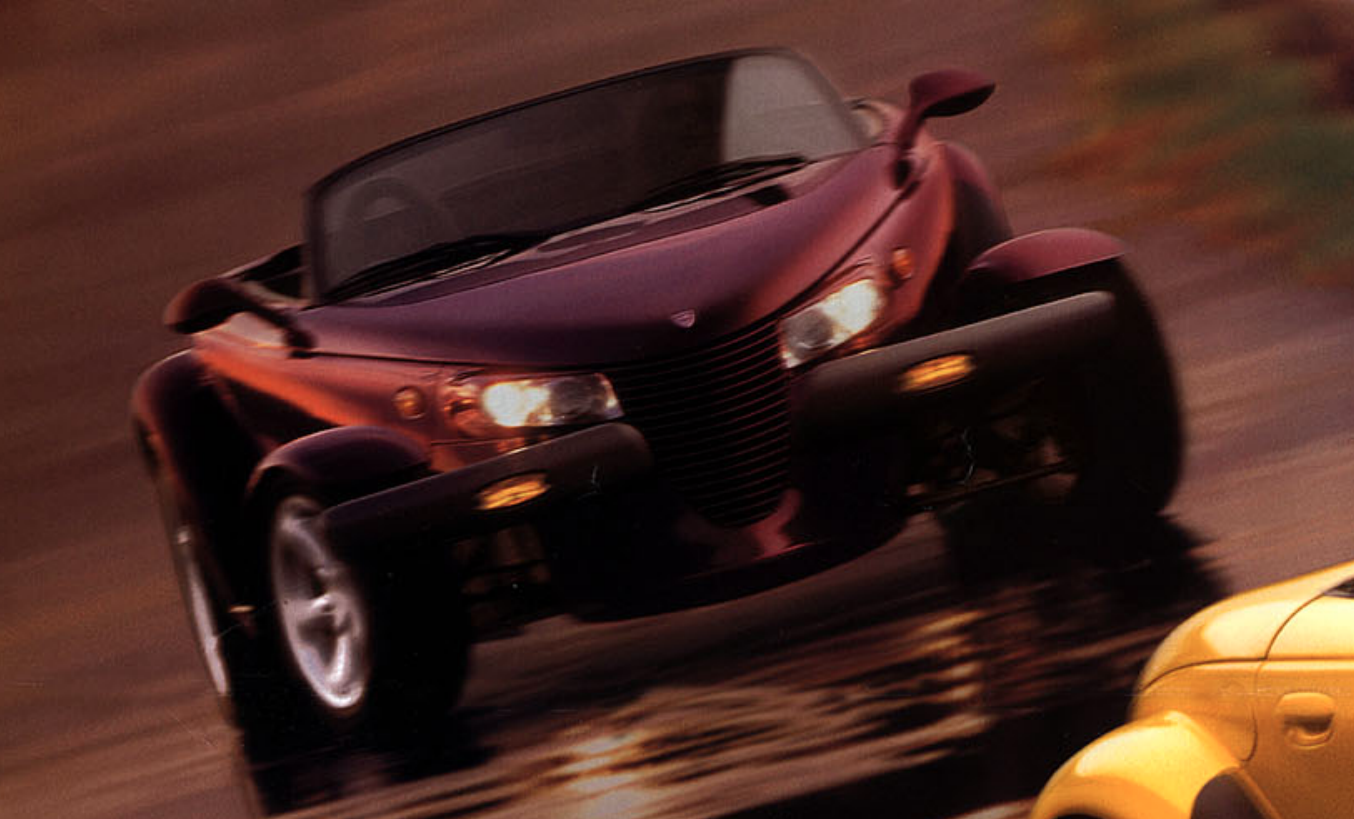 Again, and I dearly hope I’m making this clear, I don’t care what anyone thinks of the Prowler as a car. I don’t even care what I think of it. It just doesn’t matter. What matters is that in the late 1990s, before Great Crossover Takeover happened in full, a major, mainstream–hell, even pretty dull, at this point–automaker could build and sell a halo car as bonkers and specific as the Prowler.

Even the test vehicles for these were unhinged; remember the Pranglers, the Jeep Wrangler-based Prowler development mules? Just look at these things:

And, yes, I’m pretty sure the front light units on that thing are off-the-shelf snowplow headlight/indicator units.

The way Chrysler advertised the Prowler usually acknowledged the hot rod inspiration of the car, and excitedly reminded everyone that, yeah, they get it’s nuts:

Well, most of them. Some commercials that featured the Prowler were strange in a more subtle, David Lynchian way, such as this Plymouth full-line commercial in Canada that gets weirder and darker the more you think about it:

Why is this dude so into Plymouths? Why are they the only cars that seem to pass on that quiet suburban street, and what happened to him to make them the primary focus of his interest? Why has he been seemingly trained like a dog by his, well, I was assuming wife, but, really, she’s more of a captor, isn’t she? Is that man okay? Does the overall calm, idyllic look of that leafy neighborhood and lovely home blind everyone from seeing she has that poor Plymouth-addled simpleton bound by his leg?

I don’t know. I suspect that woman ate Harold decades ago, and regrets nothing. All I want to do in this post is make you take a moment to sit and just consider the Prowler, free of all the pre-conceived ideas you may have about it.

There are lots of exciting and interesting modern cars, and even some genuinely radical ones set to come out, like the Tesla Cybertruck, for example. But the Cybertruck and so many other new and upcoming cars like the Lucid Air or Rivian or whatever, with their cutting-edge tech and impressive performance, all still feel more serious than something like the Prowler. These new edge-pushing cars all take themselves quite seriously, people online are fierce and irritating in their support for these new machines, and it’s all a Big Deal and everything is about how much better one particular design or engineering solution is than the other.

It was a strange, beautiful time, and just the fact that this thing existed should give you a little hope, and a reminder that humanity’s greatest defining trait is that, fundamentally, we hate to be bored, and we will do pretty much anything–anything–to avoid it.

Here’s hoping carmakers decide to be this ridiculous again.

I'm a co-founder of the Autopian, the site you're on RIGHT NOW! I'm here to talk to you about taillights until you cry and beg me to stop, which I absolutely will not. Sorry. Hug? Also, David's friend.
Read All My Posts »
PrevPreviousMore Corn Per Gallon: The White House Opens The Taps On E15 To Reduce Gas Prices
NextI Found A Purpose-Built Off-Roader At The Junkyard And Scored The MotherlodeNext