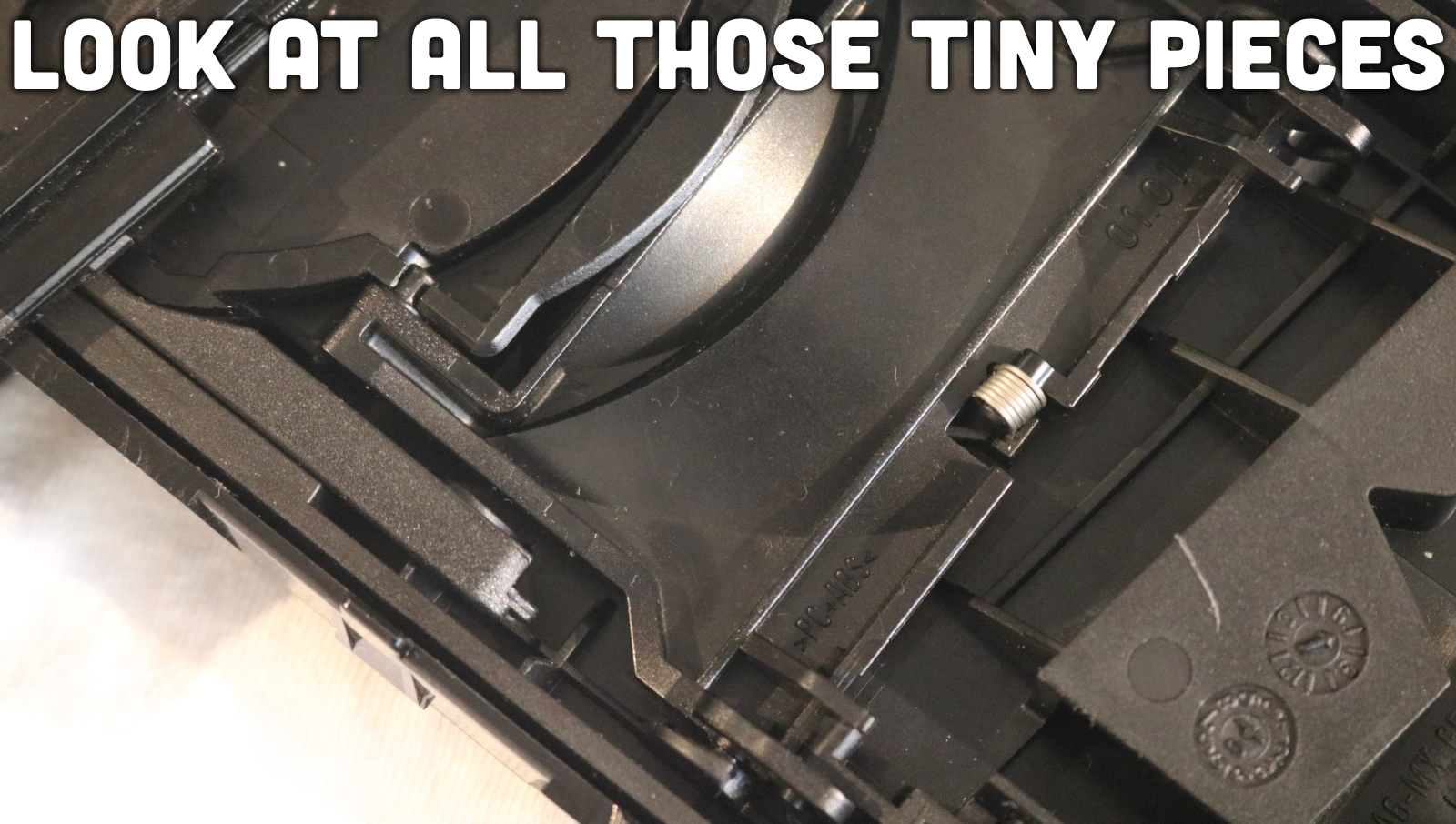 As a general rule, good German cars don’t have conventional cup holders. There are some exceptions, the current BMW M340i is just about perfect and has normal cup holders, and the W203 Mercedes-Benz C-Class was generally quite crap and had this astoundingly complex contraption that moved in three dimensions and offered two-story storage, but the adage generally holds true. Of course, there’s a very good reason why most manufacturers prefer their cup holders to be recessed into the center console – it’s a cheap design with few moving parts and an incredibly low likelihood of breaking. Contrast that with German solutions that make 246 years of American history seem simple, and you can start to see why German automakers abandoned nifty yet preposterous beverage storage solutions.

Here’s how the cup holder in an E90 3-Series is supposed to work. Simply press the faceplate, and the dashboard elegantly extends a cupholder that ratchets down to your size du jour. Not only can one of these cup holders deftly handle anything from a slim can of Red Bull to a reasonably-sized milkshake, it also sits within easy reach yet out of the way of everything. It doesn’t block the shifter, the handbrake, the climate controls, the stereo, or the armrest. It’s ergonomically perfect, despite its complexity and sheer number of moving plastic parts. Unfortunately, moving plastic parts almost always break on a long enough timeline. With nearly 17 years and more than 175,000 miles on the clock, time was very much up for my original cup holders. So, let’s see what my local BMW dealership charges for replacements.

Ah. Granted, we’re dealing in Canadian Dollars here, but $120 for a cup holder that isn’t actually correct for my early car is a little annoying. See, later E90s gained metallic strips on the cup holders, while early ones were stealthy and monotone. Still, I found suitable replacements for cheaper than what the dealership wanted and cup holder replacement is a job worth doing, so I lightened my wallet a touch. I still need to pick up some replacement clips for the trim piece to make it sit perfectly flush, but hey, two functional cup holders! While no part of this probably seems interesting, it’s time we get to the fun bit. Let’s crack open one of the old cup holders and see what’s inside. Full disclosure, this pictures are a bit shitty due to not having a real macro lens. While they’re still probably clearer than the black-and-white photocopy of a cell’s structure you had to label in middle school, I’ve still taken the time to label them for the sake of everyone’s sanity.

Let’s start with the bits we can see with the cup holder removed from the car. As is typical for E90s, this cup holder has developed some play in the mechanism, preventing smooth operation. However, we can see some remarkable complexity right off the bat. Starting from the front, the little hinged flap for conforming to various drink sizes is held taut with a spring on the hinge. What isn’t so obvious from first glance is how that piece of plastic with a sprung hinge is attached to a second piece of plastic with a sprung hinge, this time featuring two separate springs. Why? Well, an articulated design grips more cups more tightly, and differing hinge resistance promotes folding in the proper sequence.

Speaking of holding cups tightly, the long edges of the cup holder cassette are ribbed for your pleasure, adding rigidity so your passenger doesn’t end up with a lap full of latte.

As for the platform that forms the base of the cup holder, it’s actually quite ingenious. Not only does the rubberized insert prevent cans from rattling, the hinged design takes up minimal space. The base itself moves freely on the hinge shared with the rear support, while the rear support is properly rugged with a well-sized hinge and an assist spring. A separate hinged piece fits nicely into divots on the underside of the cup holder base and provides additional support.

Moving around to the back of the cup holder, there’s a nice little rubber nub to absorb vibration and prevent the cup holder from rattling against the dashboard. Fairly standard stuff, but opening things up reveals where standard stops.

Pry off the underside of the cup holder case, and the first thing you’ll likely notice is a thin piece of metal wrapped around a plastic roller, terminating in an unusual t-shaped head. This nifty piece functions as a spring, allowing necessary space between the cassette and the back of the case so the eccentric latch mechanism can do its job.

While it’s easy to miss this strange piece of plastic pressed into the case, it serves a critical function. As the cup holder cassette retracts, a pin on the top of the cassette finds its way into this little piece of plastic, following the curve on the left. As soon as compression’s let out on that aforementioned spring, the pin on the cartridge drops into a gate on the eccentric mechanism and keeps the cup holder shut. To extend the cup holder, press on the face plate to place the spring under compression, and the pin drops into another gate that guides along the outer curve in the mechanism. Similar mechanisms are used all the time in the automotive industry, so it shouldn’t be a huge surprise to see one here.

Now, once the pin on the cassette is free of its keeping gate, the whole cassette extends, guided on three tracks. Two typical flat channels guide the spring and inboard side, while the outboard side rides on a partially-geared track. That gear is retained in the cassette using a relief and a cover so it always makes great contact with its mating teeth. Good stuff. Oh, and right next to the gear cover is another little rubber piece to prevent the cassette from rattling against the back of the casing. Details, people. Details!

While this is all quite neat, it doesn’t exactly explain how the cup holder base extends and retracts with the cup holder. After all, it stays flat through almost this entire circus and can’t have been designed in a manner that would let it jam. So what did BMW’s designers do? They used a little crank on the cup holder base back plate hinge (say that five times fast) and a special little rocker arm. That rocker arm is hinged in the middle and has a little head that rides in a track on the side of the cup holder. As the cup holder cassette reaches the end of its travel, the channel for the arm kinks up, lifting the rearward end of the arm, applying pressure to the crank and lowering the cup holder base. It’s an absolutely absurd mechanism, but it’s likely the cheapest way of getting the job done. 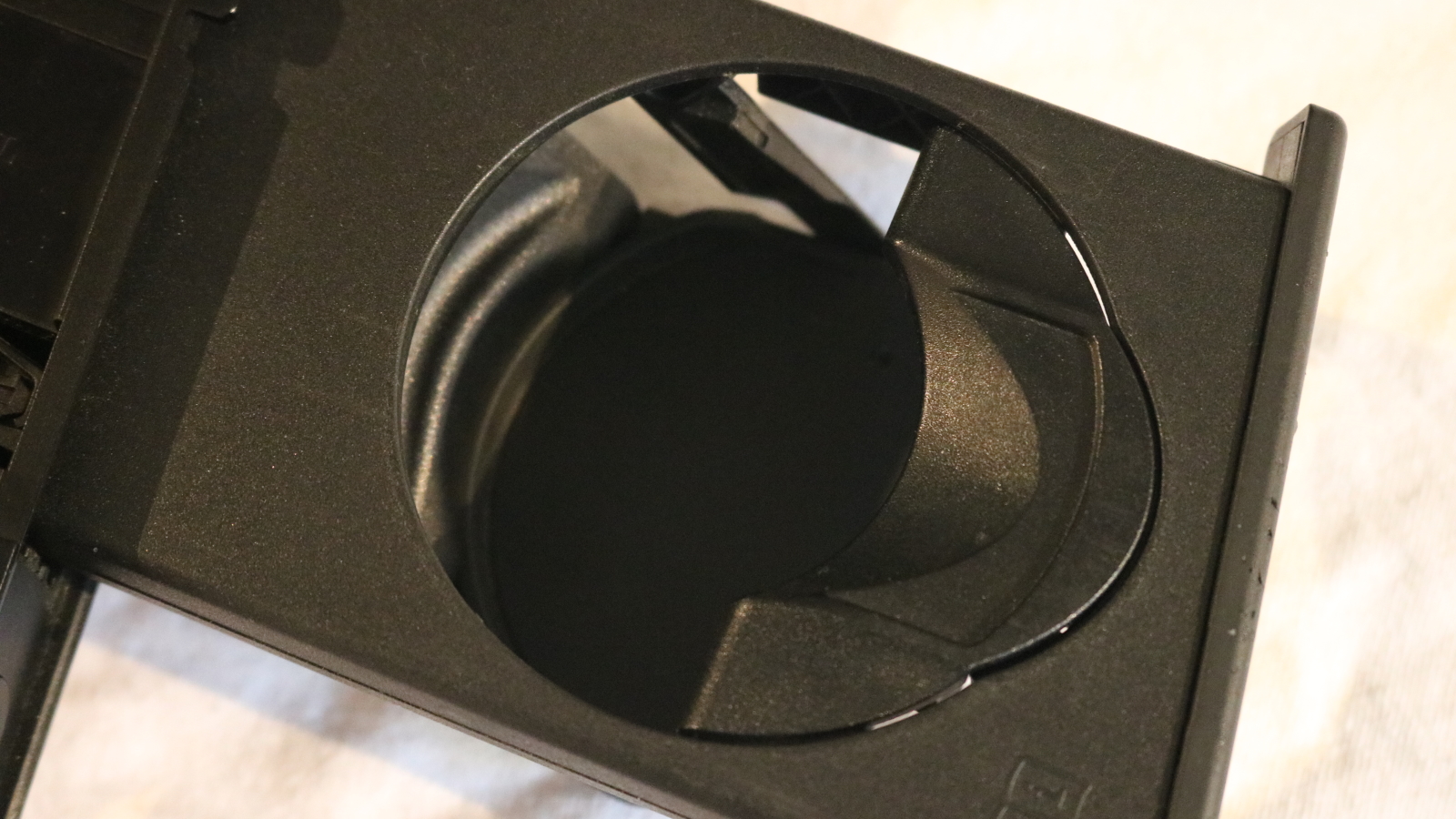 Seeing this cup holder apart, you just get the sense that someone in Munich looked at the pull-out dashboard cup holders in a 1995 Toyota Pickup and thought, “How can we make this 15 times more complicated and 10 times more expensive?” It’s just such a ridiculous and unnecessary solution of satisfying the American urge for sugar-laden caffeine on the move. Yet despite its complexity and fallibility, the old adage still applies – when it works properly, it’ll make you wonder why everyone else doesn’t copy it.

Honestly, the cup holders on my E90 325i are so good that I genuinely don’t mind spending money as necessary to keep them in operation. If you’ve ever met me in person, you’ll know that I’m not big and don’t require massive cups of soda from fast food establishments. I mean come on, the average human bladder can only hold about 16 ounces of urine. With wonderful automatic climate control to prevent occupants from sweating from every pore, why go for the Double Gulp? I want my cup holders to fit small drinks, and most cup holders simply aren’t good at that. While these BMW cup holders definitely don’t fit the American ideology of “supersize me,”  [Editor’s Note: Oh, these smug Canadians with their small drinks! We get it, Americans like big drinks. Jeez. – JT] they’re so rational, functional, and beautifully-engineered that I simply can’t help but love them.

Thomas is a Nu Rave-blaring, heel-toe downshifting, maple syrup-swilling, chassis-geeking, junkyard parts-hauling, floppy-haired scenester who's been writing about cars since college. His current ride is a 2006 BMW 325i with the six-speed manual gearbox. Instagram: @thomas.hundal Twitter: @thomashundal
Read All My Posts »
PrevPreviousThis Is What Cars Would Be Like In A World Full Of Dragons
NextCold Start: That FaceNext