We tend to romanticize dragons a lot in human culture, glamorizing the awe-inspiring majesty of gigantic, fire-breathing, flying lizard-beasts, painting pictures of them for centuries in cultures all over the globe. Dragons get fetishized, feared but also admired, and, in some ways, even longed for. But that’s only because nobody is really thinking about how much it would suck to have skies filled with massive hungry carnivores that shoot jets of flame. It’d be miserable, inconvenient, and, very likely, expensive. If you believe in the idea of the multiverse, then somewhere out there is a world like ours, but with huge, hungry dragons flying around. With that in mind, the only reasonable question to ask is: “What would the cars be like in such a universe?”

Dragons or no dragons, people are still people, and as such we have places to be, business to do, trips to take, errands to run, booties on which to call, junkyards to scour. For all of these things we need our cars, and no stupid overgrown lizard with fiery halitosis is going to stop us.

So, we need to be logical about the Dragon Problem, and really break it down and see how to solve it. Fundamentally, dragons cause two main types of interference with the motoring public: 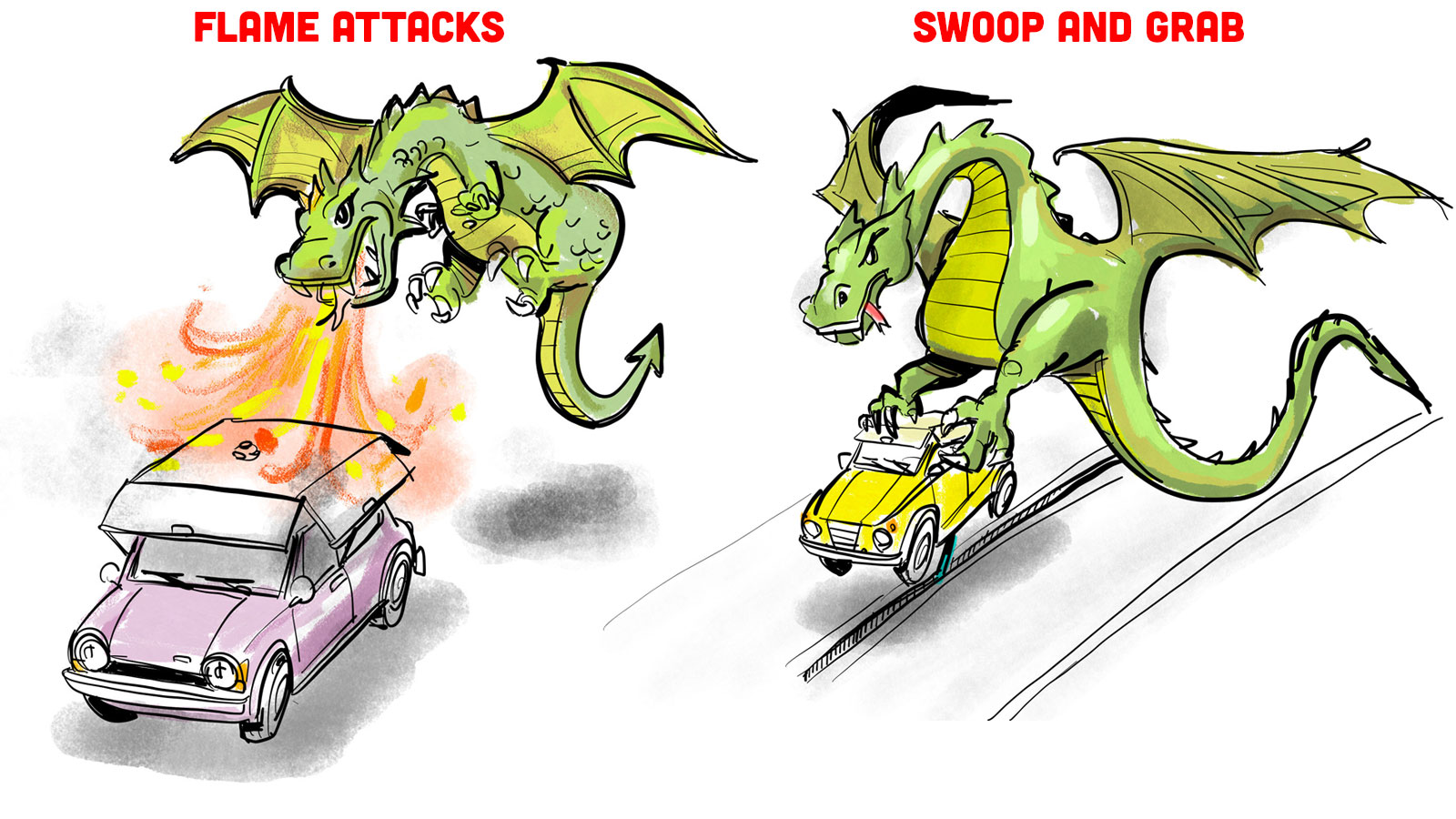 Flame attacks and “swoop and grab” events are the main issues. In the first, a dragon swoops down and attempts to incapacitate the car, filled as it is with delicious, soft, tangy humans, by blasting it with its flame-breath. An unprotected car would soon have its roof melted, leaving the well-cooked people inside effectively served to the dragon in a bento box that was once your car.

The second attack is closer to how other flying predators capture prey: by swooping down fast and grabbing the lunch with powerful talons. Dragons can swoop down and grab a car, carrying it off, then dropping it to kill the people inside before breath-cooking them and going to town.

An effective car for the dragon world needs to address both of these situations, and do so without becoming unaffordable, because I think the economic toll of a world full of destructive dragons will already be extremely significant. Maintenance for almost everything is likely orders of magnitude more expensive in a world with dragons, so we need to try to come up with solutions that are simple, robust, and sustainable.

With that, I give you the Dragon World Car: 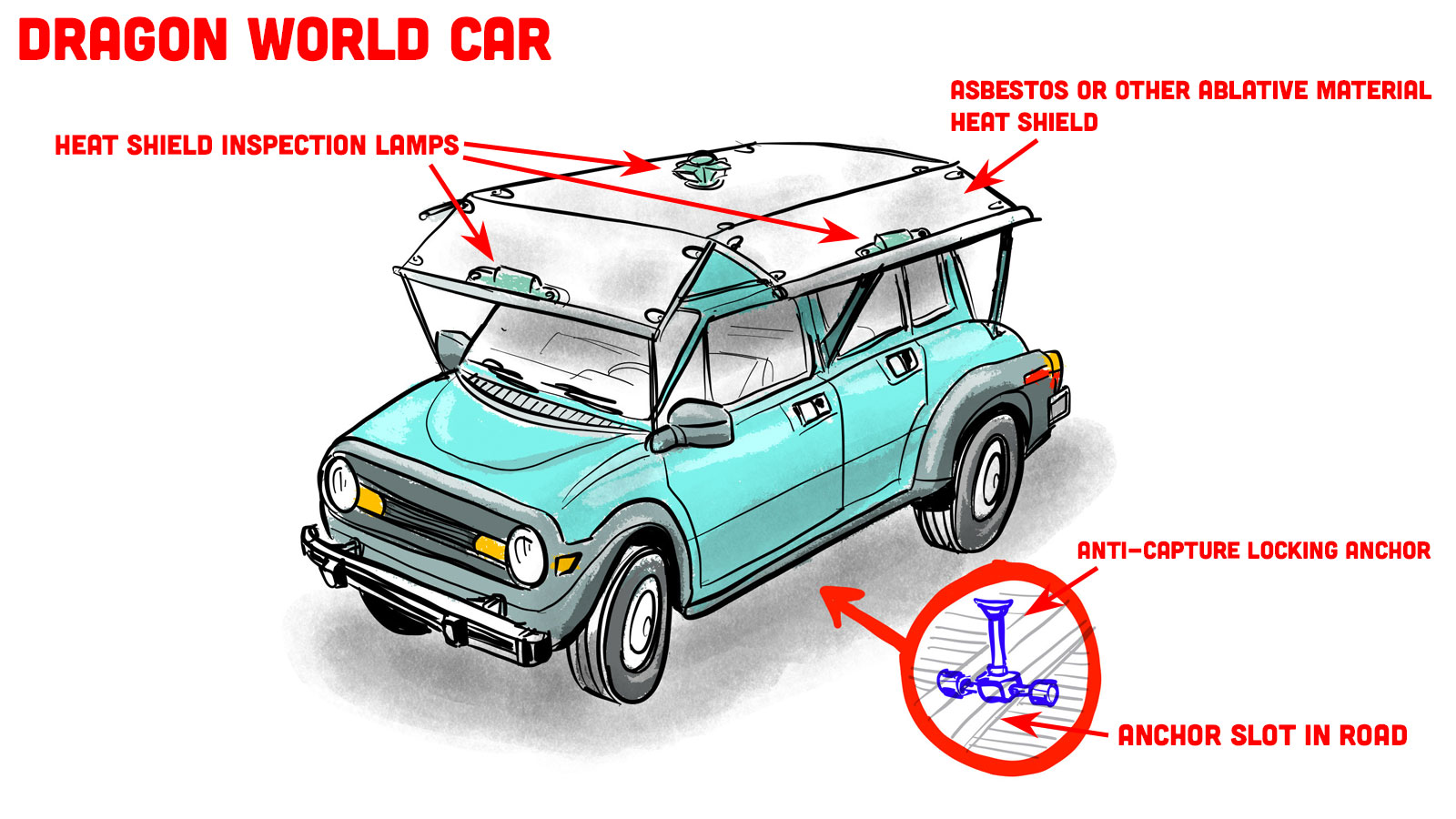 Most obvious is the heat shield assembly on the roof. By design, the heat shield is fairly simple in shape, a series of five flat panels that are designed to be easy to replace by the owner with no special tools. Each panel has a DOT-mandated inspection lamp, so you can assess the condition of the heat shield before driving, even at night, as it is illegal to drive with a compromised heat shield panel.

Police are also on the lookout for heat shields in poor condition, and you will get ticketed if you have a compromised panel, or if the inspection lamp is out, so best stay on that.

The basic technology is essentially the same as that used as a heat shield material on space capsules like the Apollo Command Module. This type of heat shield has a structure that doesn’t require exotic materials: it’s a fiberglass honeycomb, filled with an ablative heat shield material like AVCOAT, which is silica fibers in an epoxy novolac resin. 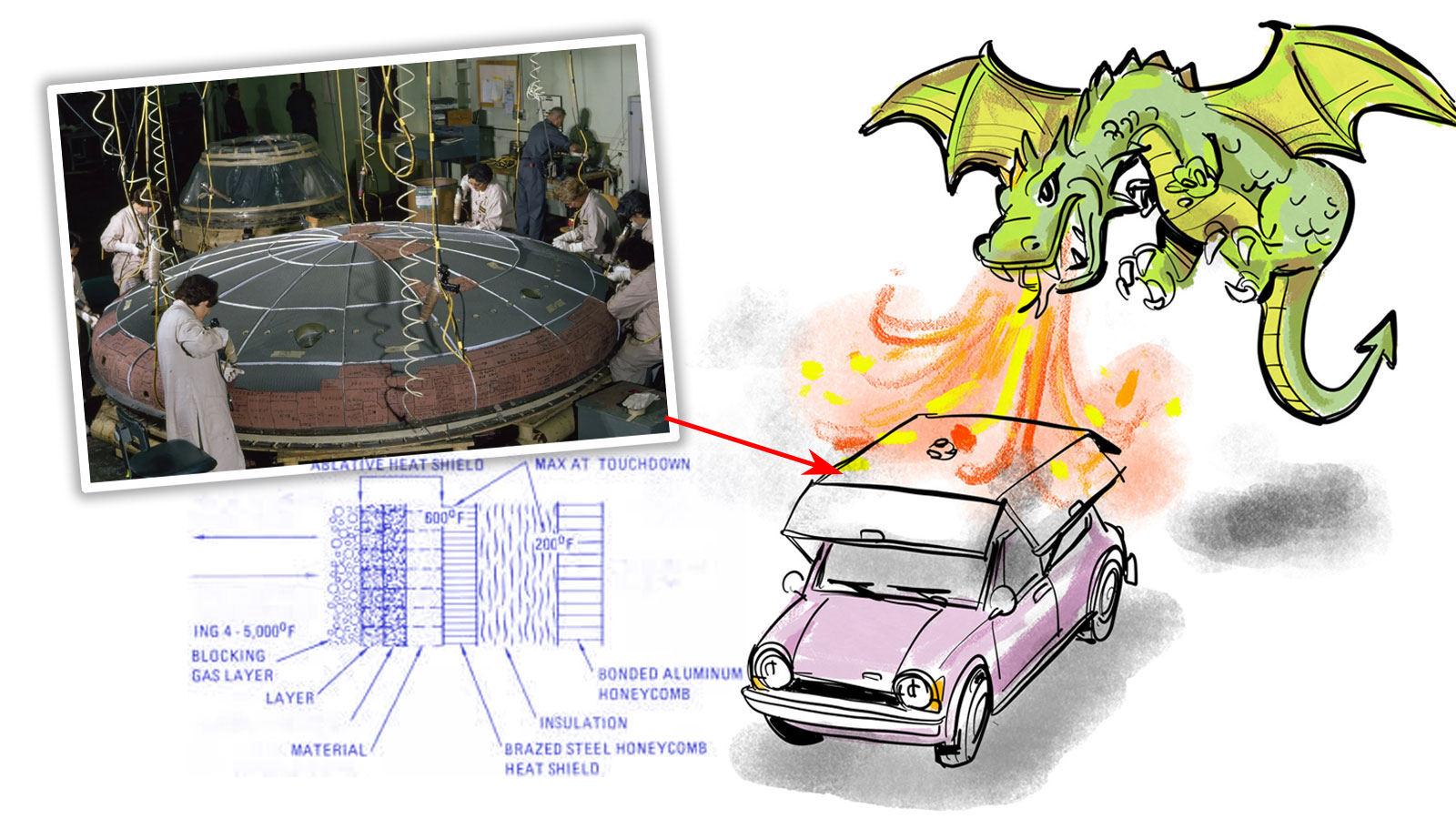 This sort of heat shield can withstand up to 5,000° F, well within the range of what I just now decided a dragon’s fire would be. The disadvantage of this sort of ablative shield is that it does char and, well, ablate, so it should be considered a consumable, and will require periodic replacement.

Other more reusable heat shield materials are available, like the Space Shuttles’ tile-based Thermal Protection System (TPS), but these ultra-pure silica ceramic tiles are much more expensive and fragile than the fiberglass-and-resin ablative heat shield solution. For the daily rigors of automotive use, I think the ablative heat shield would be a better choice.

In worlds plagued with dragons, car heat shield panels would come in a few standard sizes, be mass-produced and sold cheaply at most big box home and garden stores, as well as Wal-Mart, probably. In general, they’re likely good for three big blasts from a dragon before requiring replacement. The inspection lamps are usually part of the replacement panels, since they tend to get melted off after a few attacks, but they can be changed independently, if needed.

Every driver needs to know how to swap a heat shield panel, and this is part of the standard driver’s test. But don’t worry, it’s pretty easy, usually not even requiring tools. 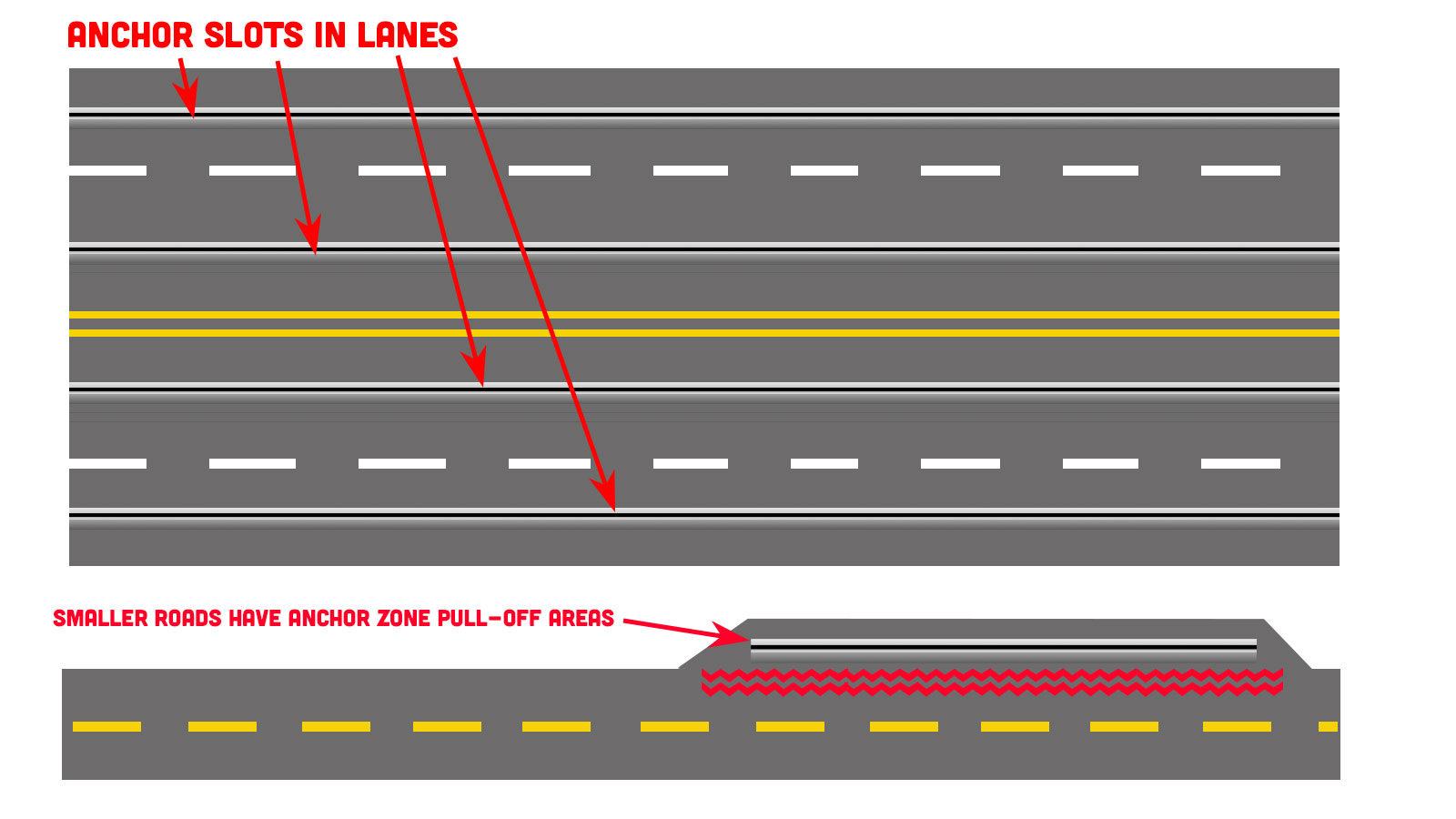 Slightly more complex is the swoop-and-grab problem, and while there’s a fairly simple mechanism to solve this, it does require a specific infrastructure to work. The infrastructure is a single channel down the middle of every lane, a channel with reinforced steel covers that forms an inverted T-shape in cross-section. These “anchor slots” are built into the lanes of most major highways and large city streets, but may not be present on smaller or secondary roads.

The way the system works is like this. Every car has an inverted T-shaped anchor with rollers on the ends that is mounted to the frame of the car in a very robust manner. The anchor is spring-loaded so that its rest position is down and perpendicular to the car; that is, the locked position. The anchor is designed to require no motors or electric power or anything, and if the spring breaks while in use, the anchor will always end up in locked position, as a failsafe.

When driving on roads with no anchor or exiting a road with an anchor slot, a lever in the car allows the anchor to be rotated to be parallel to the car and raised up, allowing it to be removed from the anchor slot: 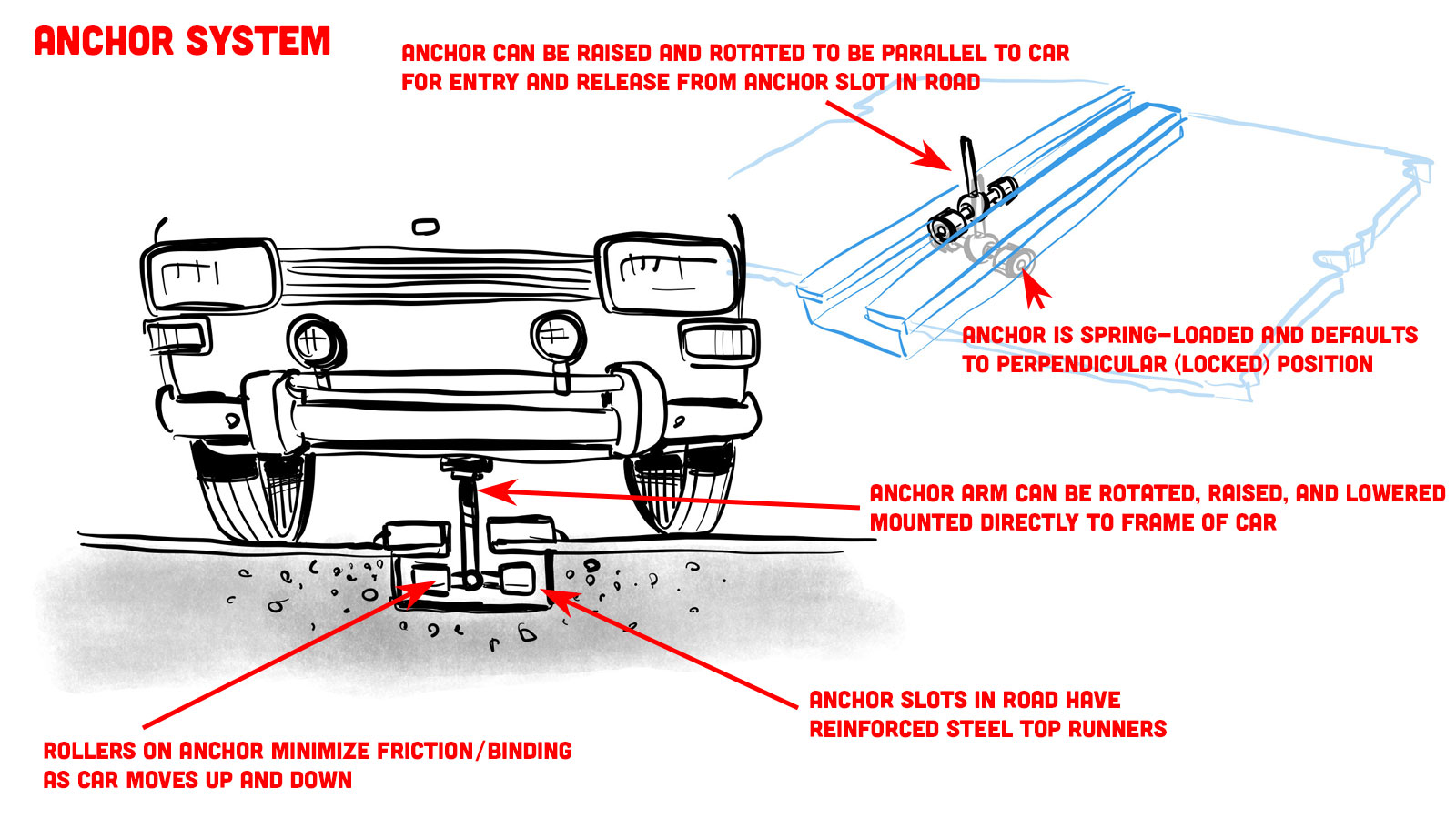 All parking spaces would be required to have an anchor slot in them as well. 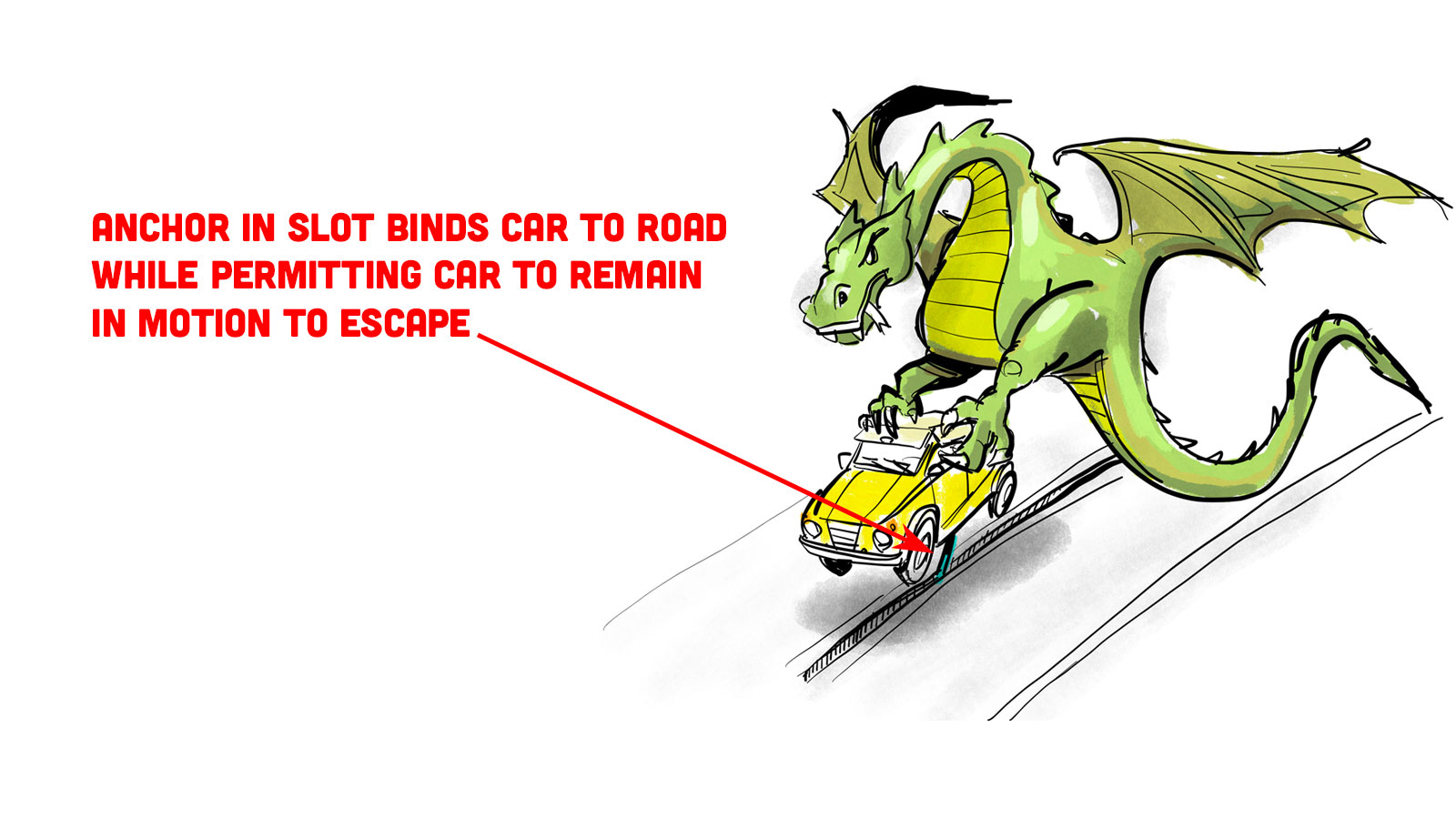 While the car will undoubtedly sustain a good amount of damage, an anchor system in DOT-approved condition will hold the car to the anchor slot with enough security that at least 97.5% of adult domestic dragons will not be able to break the car free. The roller-based design of the anchor permits the car to continue to drive and accelerate while anchored in an attempt to break free from the dragon’s grasp.

Even though it’s just a basic slot in the road and a relatively simple anchor on the car, the materials required must be robust and must be maintained diligently if the system is to work, and that’s not cheap. There’s no room for rusty anchor mounts or anchor slot upper covers in a world of dragons; it’s literally the difference between getting to your book club or being a charred set of bones found in a huge pile of dragon scat by the side of the road, so please take maintenance seriously.

Forget your Magic cards and Lord of the Ring movies and all those seasons of Game of Thrones — there’s nothing fun about living in a world where dragons exist. It’s expensive and frustrating and you’re always nervous, scanning the heavens for that little dot that could all too quickly become your doom. Not being at the top of the food chain deeply sucks. Ask any rabbit you meet. Even so, we’re still going to want to drive, so I’m extremely happy there are solutions out there. Be careful, dragon-world motorists, and inspect those heat shield panels!

I'm a co-founder of the Autopian, the site you're on RIGHT NOW! I'm here to talk to you about taillights until you cry and beg me to stop, which I absolutely will not. Sorry. Hug? Also, David's friend.
Read All My Posts »
PrevPreviousThe U.S. Government Is Trying To Crack Down On Shady Dealership Tactics
NextLet’s Take A Look Inside A Ridiculously Complex Cup Holder From A BMW 3-SeriesNext