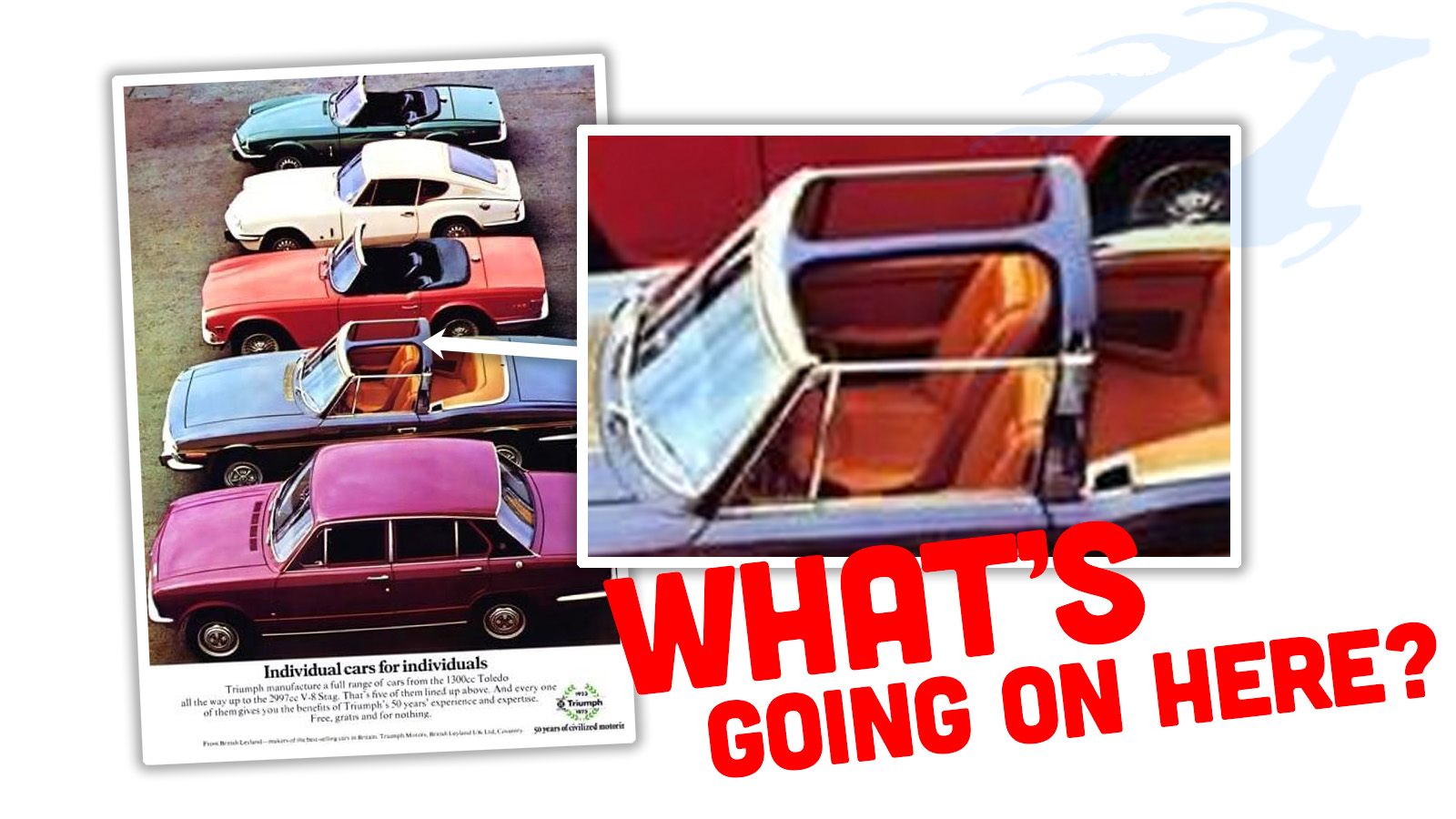 I was strapped onto the old wooden palettes that comprise the work surface of my dentists’ office – The Autopian’s dental plan is run by a company headquartered in a never-stopping Chevy Lumina that circles the San Fernando Valley perpetually, pausing only to dock with the fuel tanker and food-dumping truck, so the providers tend to be smaller independent Folk Dentists. Anyway, as I was getting my teeth rotated and my bicuspids re-bifurcated, I noticed an old British car magazine flung onto the pile in the kiddie pool that served as the waiting room. It was open to a Triumph ad, one that showed a lineup of five Triumphs then for sale, sometime in the mid 1970s. One of the cars, a Stag, caught my eye because what the hell is going on with that roof? Let’s find out.

A full 60% of the Triumph lineup shown here are convertibles: a Spitfire, TR6, and the Stag. The first two look like normal roadsters of the era, but the Stag is different. It seems to be wearing some sort of strange orthopedic device over the front seats, something that looks kind of like a cross between a rollbar and a T-top, and it’s flanked by framed windows on the front doors. It’s weird! It looks weird!

Factoid Extra: Triumph’s ‘60s colour range (like that of Austin Morris in its BMC days) was criticised for being dull.

In a happy coincidence, The Car Factoids tweeted this same ad, so, clearly, fate is demanding to have this strange roof explained. Before we do that, let’s just talk a bit about the Stag itself: it was actually conceived as a competitor to the Mercedes-Benz SL sports cars, and was a handsome, Michelotti-designed four-seat sporty convertible, with a 3-liter Triumph V8 that, interestingly, shared some tooling with the 2-liter slant-four engine Triumph licensed to Saab. Unfortunately, part of the deal with the modularity of these two engines was that the V8 used the same water pump location as the four.

Stay with me, here; because the Saab used this engine as a longitudinal FWD car, it was placed backwards under the hood, since it had to drive a transaxle in front of it, instead of a driveshaft behind it. As a result, the water pump was placed atop the engine instead of by the front of the engine, and on the V8 version, this caused the engine, when hot, to lose coolant from the expansion tank, and eventually it’d get low enough that the pump couldn’t circulate fluid, and everything would overheat. It was kind of a mess, and these attractive cars got a reputation for overheating as a result.

Here’s a Stag in action, not overheating, in the Bond movie Diamonds Are Forever:

The stag also had a fantastic badge, a stylized chrome stag, a-leaping: 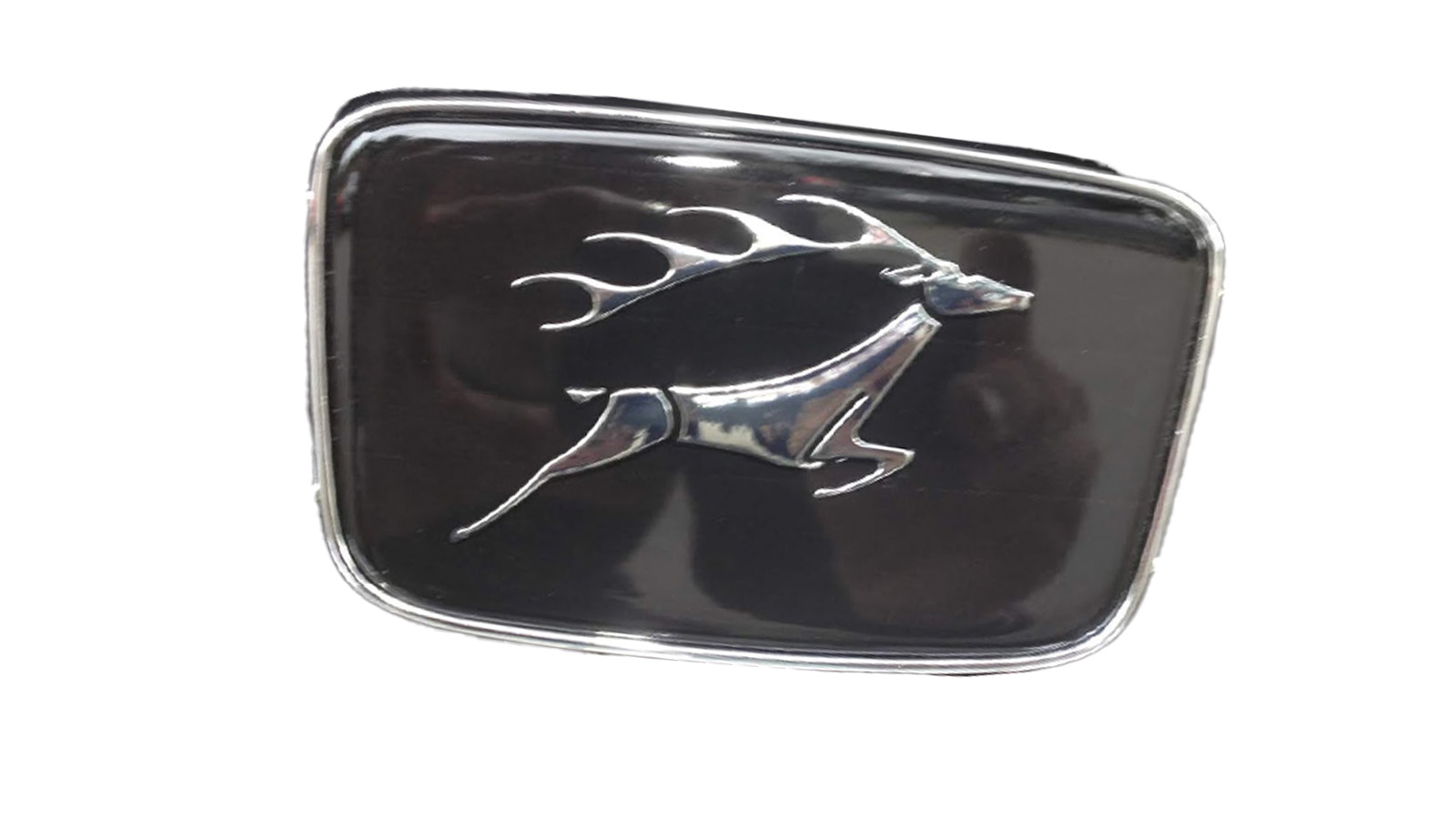 But that’s not what we’re here to talk about! We’re here to talk about that weird-ass hat there. It’s a lot more hardware than just a roll bar or targa top, and there’s a reason for that: it’s doing a lot. The Stag was built on the same basic platform as the Triumph 2000 sedan, but, lacking a roof, required an awful lot of body stiffening.  Also, there were all the dire rollover standards expected to come out of America. So while many cars used a simple roll hoop or targa-style arch to accomplish this, the Stag required a bit more stiffening, relying on the windshield frame as well, so that’s why we get this strange roll-hoop-connected-to-the-windshield thing, something that looks like it should have T-tops in it, but doesn’t. 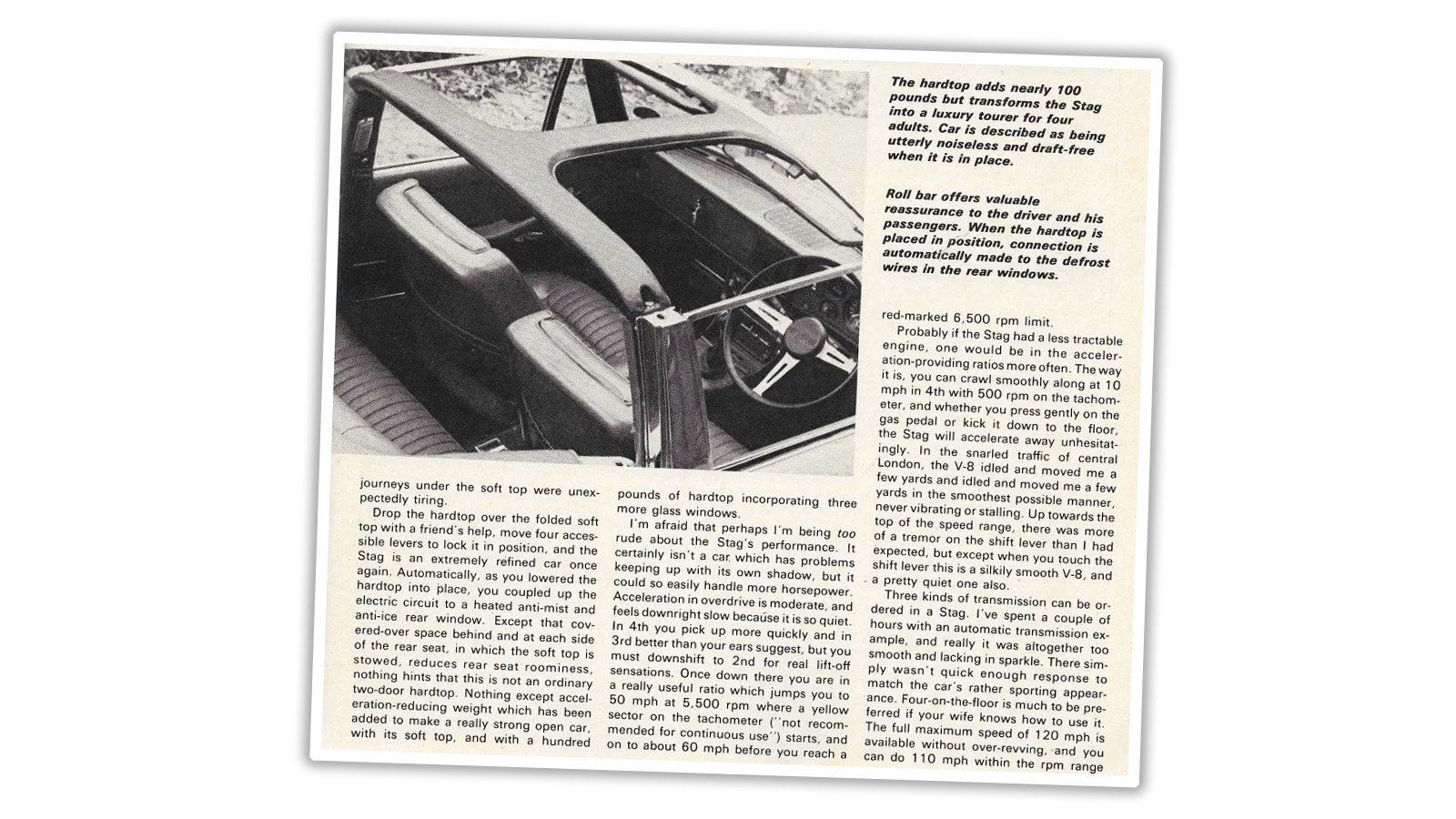 Reviews of the era noted that the elaborate roof setup included electrical hookups for the optional hardtop’s heated rear window defogger, and noted how much weight all the stiffening stuff plus the hardtop added. It did seem to help with stiffness, though. I’m not sure if the framed door windows did much to help with the stiffness, but I guess if you’re going to have a few big-ass steel girders on your convertible, a few more can’t hurt.

So, yeah, the Stag looks kind of weird with the top down, and I can’t quite think of another car that has a setup quite like this one. Which is, of course, why we just talked about it.

I'm a co-founder of the Autopian, the site you're on RIGHT NOW! I'm here to talk to you about taillights until you cry and beg me to stop, which I absolutely will not. Sorry. Hug? Also, David's friend.
Read All My Posts »
PrevPreviousIt’s Wrenching Wednesday! Autopian Members: Time To Partake In Automotive Therapy
NextChrysler Made A Rare Electric Minivan In The 1990s, And You Can Own One Of Them TodayNext