Facebook-f Twitter Instagram Rss
Menu
Menu
Home » Chrysler Made A Rare Electric Minivan In The 1990s, And You Can Own One Of Them Today

Chrysler Made A Rare Electric Minivan In The 1990s, And You Can Own One Of Them Today 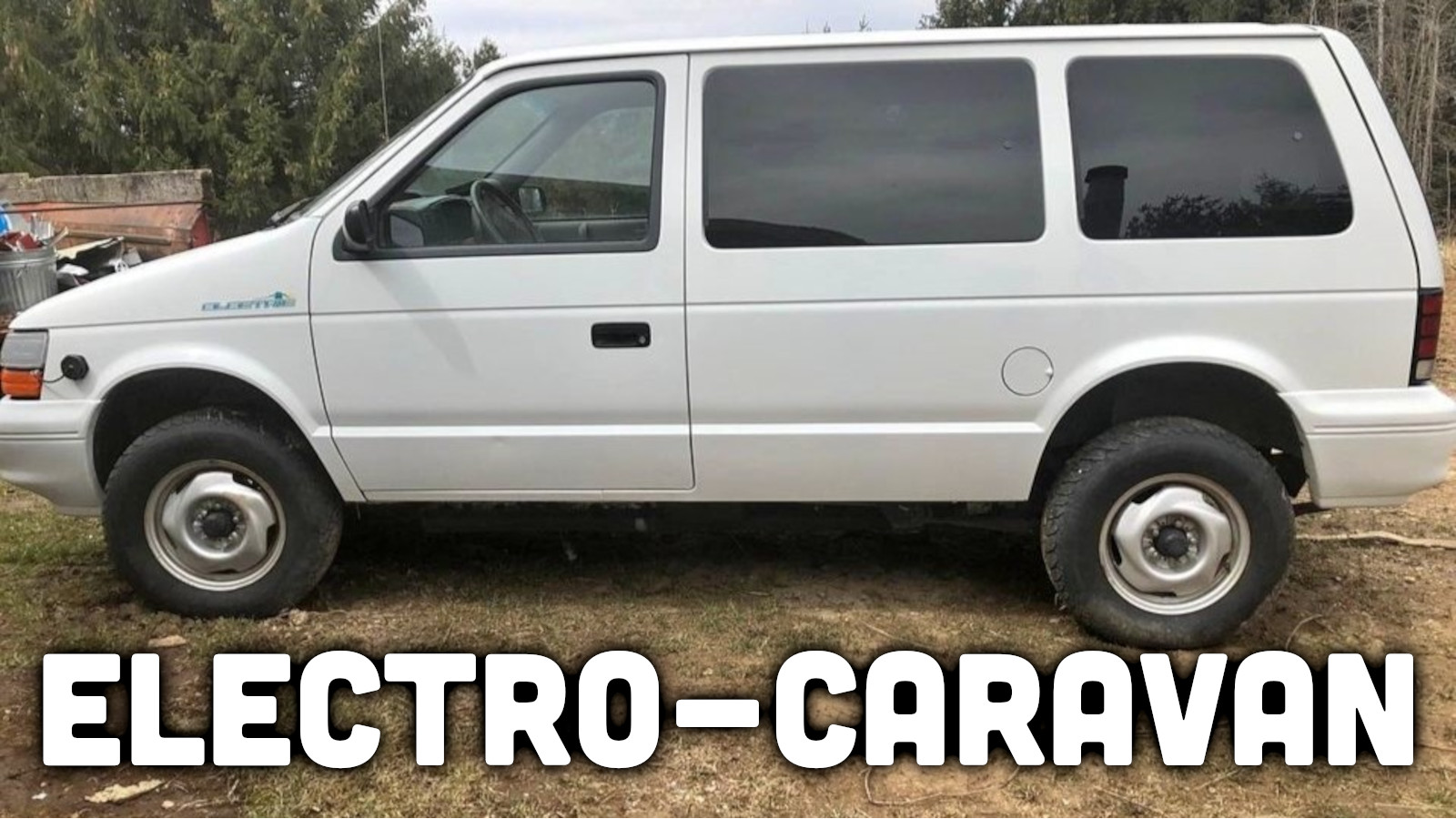 In the 1990s, a number of manufacturers looked to the future as they planted electric powertrains into cars. The General Motors EV1 is perhaps the most famous ’90s EV, but it was far from alone. Ford electrified the Ranger pickup in the 1990s, and Chrysler turned the Dodge Caravan into an EV called the TEVan. One of these rare TEVans has come up for sale, and it looks like an interesting project for someone wanting to tinker with a cheap EV.

If you look back through the history of electric vehicles, you could divide electric evolution up into eras. In fact, that’s exactly what our Jason Torchinsky did, dividing EVs up into three eras that span nearly two centuries and are sorta based on the level of technology for the day. Check out this sweet graphic:

The Dodge TEVan would fall into the Crap Era, which means that things are going to be sorta awful, but still pretty neat.

According to a 1991 issue of Popular Science, a number of the EV efforts of the 1990s trace their roots to air pollution in California. As the magazine wrote at the time, there were a number of ideas to reduce air pollution in the Los Angeles basin. There were proposals for everything from all-EV fleets to pollution-free zones. Lawmakers figured it would take more than just new rules to kickstart EV development. In 1988, Los Angeles city councilman Marvin Braude proposed the L.A. Electric Car Initiative, which called for Los Angeles to sponsor a competition where the winning company would score a contract to make 5,000 passenger EVs and 5,000 EV trucks for the city. A year later, the initiative was approved and 200 proposals were sent out to prospective companies. Los Angeles received back 19 responses, which were whittled down to just three low-volume manufacturers.

That same year, the California Air Resources Board pushed out a more ambitious program. The Zero-Emission Vehicle Program originally required two percent of a large auto manufacturer’s total California sales to be zero-emission vehicles by 1998, with the percentage rising to five percent in 2001 and 10 percent in 2003.

Suddenly, America’s automakers needed to have viable EVs before the end of the decade. 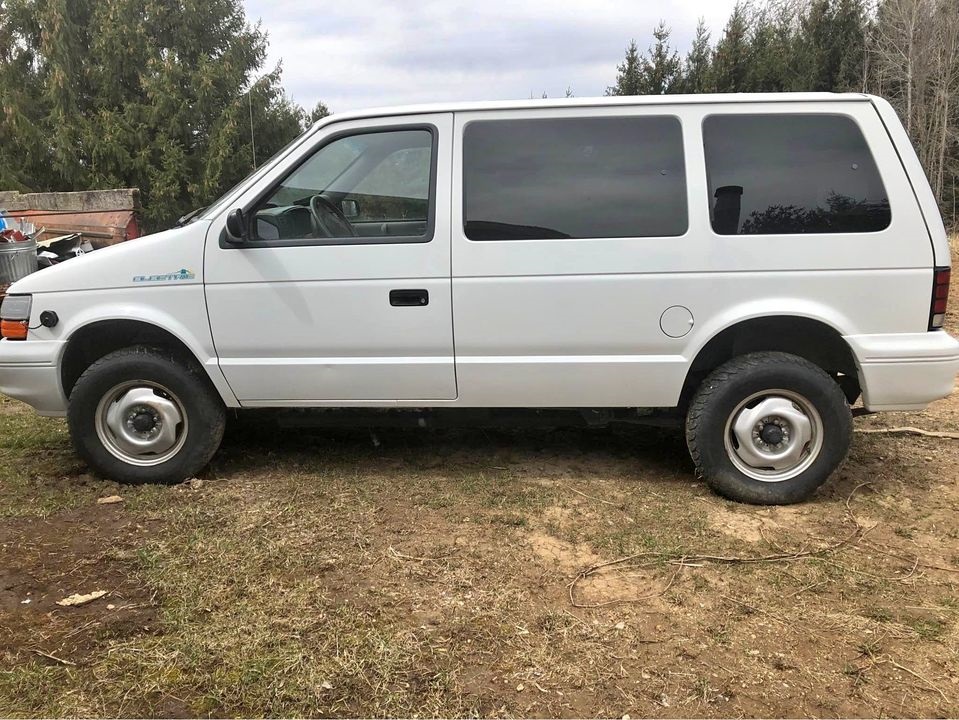 In 1991, Chrysler teamed up with General Electric’s Electric Power Research Institute to make an electric minivan. A year later, the duo produced the TEVan concept. According to Chrysler, the “T” referred to the van’s T-115 code name while the “E” stood for electric. The TEVan is based on the second-generation Dodge Caravan and was built on the same Windsor assembly line shared by the gasoline-powered version of the van. Chrysler says it was the first company to introduce an all-electric minivan with the TEVan, and it was sold from 1993 through 1995 in very small numbers. 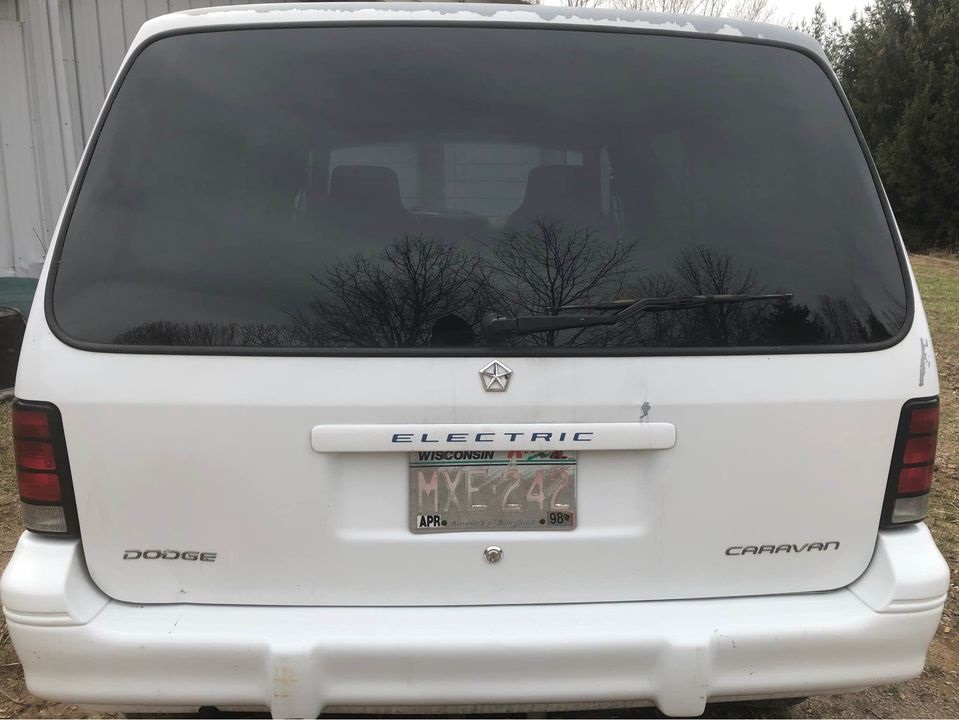 Depending on the source, Chrysler either made 56 or 80 of these vans. Half of them reportedly came with 30 Eagle-Picher nickel-iron 6-volt batteries. This 180-volt pack provided juice to an air- and oil-cooled DC motor rated at 35 continuous horsepower with a 70 horsepower peak.

Documentation with the van says that a blower fed air through ducting to help keep the motor cool. 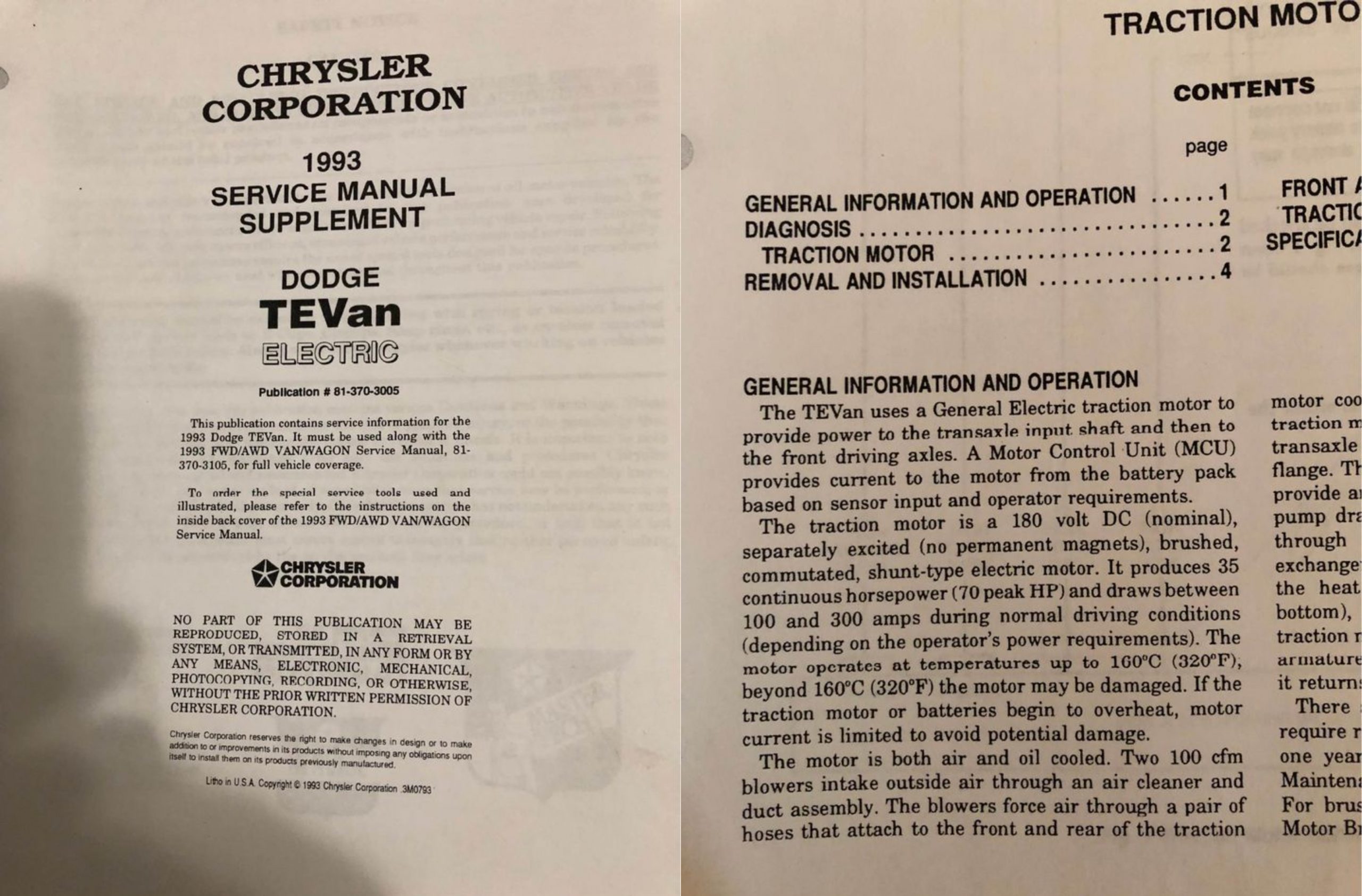 The motor drove the van through a two-speed transmission and still featured the equipment that you’d expect in a Chrysler van like power steering and air-conditioning. The estimated range was in the ballpark of 60 to 80 miles and the top speed was about 65 mph, though exact details seem to vary depending on the source.

The other half of the TEVans reportedly came with 30 SAFT nickel-cadmium batteries rated at the same voltage, with a range closer to 50 miles. In either case, the batteries reportedly weighed in at around 1,800 pounds and were topped up from an onboard charger that was able to get the batteries back to full in as little as a few hours. Chrysler expected the batteries to last about 100,000 miles.

According to a 1993 Los Angeles Times article, Chrysler proved what the van could do by taking one on a nine-day, 2,604-mile trek from Detroit to the Los Angeles Convention Center for the Eco Expo. Chrysler reportedly called it record-breaking, beating an electric car that drove 2,500 miles in 158 hours. The automaker made the trip with backup from a crew of 10 who rode in a motorhome and a truck carrying a machine to recharge the van. The video doesn’t seem to want to embed, but check out this film from Fort Worth’s KXAS-TV/NBC detailing the road trip and the van. 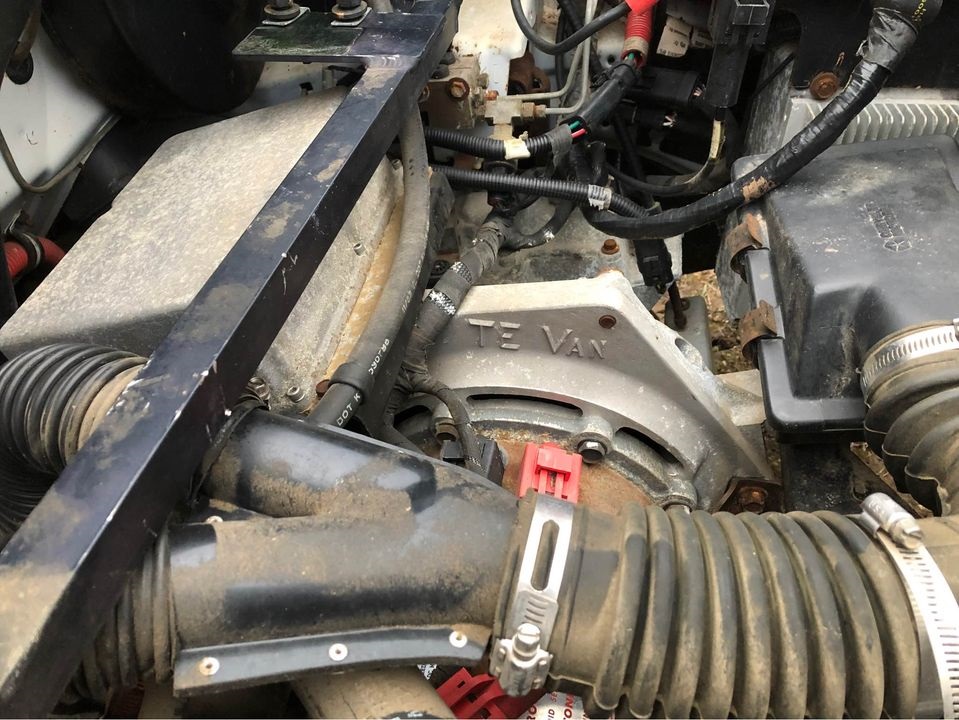 Apparently, the van made it 50 to 70 miles between recharges that lasted up to three hours. It was a feat, but at the time, Chrysler was unsure if the van could pass a CARB test where an EV had to climb a theoretical hill with air-conditioning running.

The van never got sold to the public. Instead, they sold for $120,000 each with Chrysler saying that utility companies were the principal customers. Then, once the utility companies were done with them, some people picked them up second-hand. Amazingly, this isn’t even Chrysler’s only EV van of the 1990s as the TEVan did get a sequel. In 1998, the Dodge and Plymouth Electric Powered Interurban Commuter (EPIC) minivans got third-generation Chrysler minivan bodies and new batteries. These also went to fleet customers. 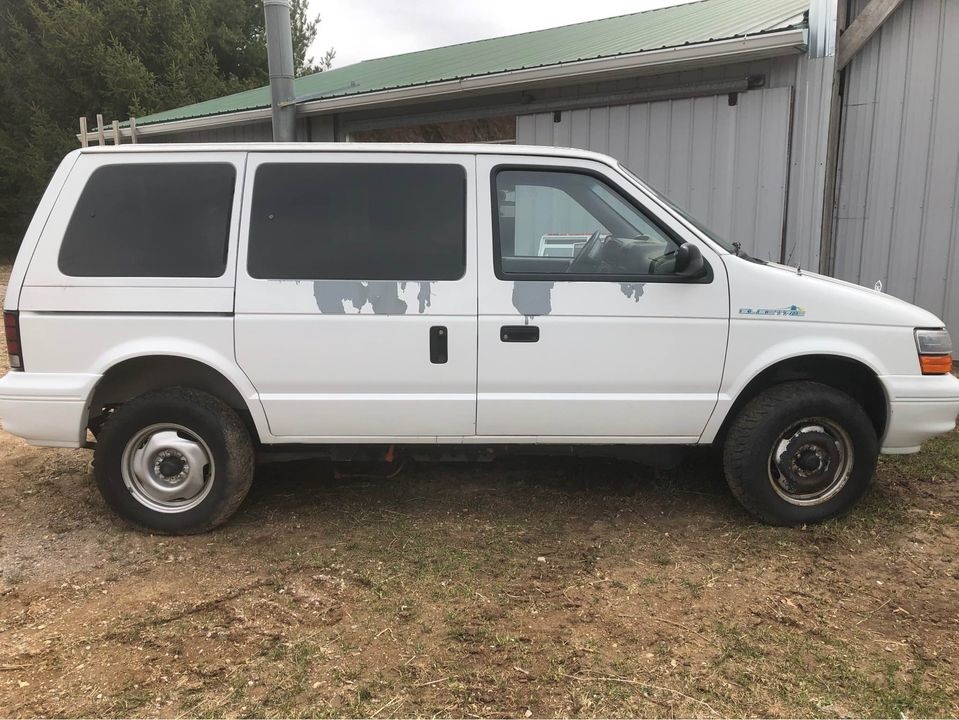 This example appears to be in good physical shape, but the electric drive system will need help. The seller says that it drove fine eight years ago when they drove it 100 miles. It suffered from a charger controller malfunction that left it parked. As of today, the charger controller still isn’t working and now it doesn’t have any batteries at all.

Flipping through the pictures, I noticed that there was a discrepancy between the manuals and the equipment. The manual says that the motor produces 35 HP, but the motor itself says 27 HP. 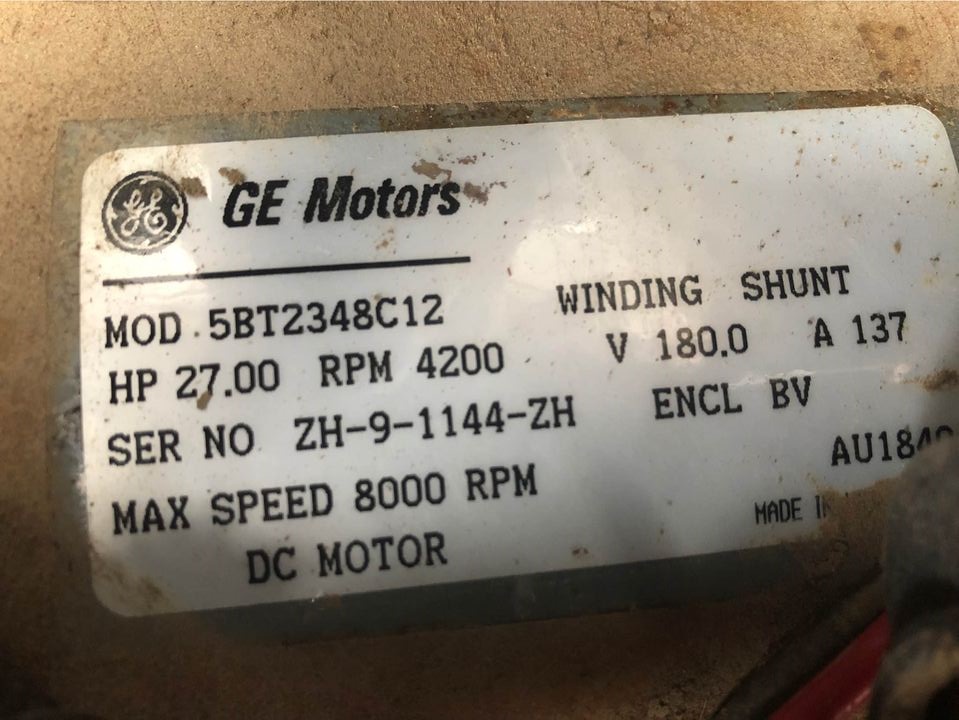 Some sources state the actual output to be 27 HP. Given the tiny production numbers, it’s unclear how easy it would be to restore this van. However, it might be the kind of project for someone wanting to experiment with building their own EV. Here’s a van that might have some usable parts and you don’t have to worry about disposing of an engine.

If you want to start your own EV adventure, this 1994 Dodge TEVan will set you back $3,000 from a seller in Fall River, Wisconsin.

(All images to the seller unless otherwise noted.)

For Just A Single Year You Could Buy A Manual VW Wagon With GTI Power: Holy Grails

Ford Made A Version Of The Tempo That Actually Lived Up To Its Name: Holy Grails

Our Daydreaming Designer Imagines A Rivian With A Ram Revolution-Style Third Row, Except Bigger

Mercedes is a lifelong fan of all things powered by an engine. When she isn't driving one of her five Smart Fortwos or her 14 other vehicles she could be found in the cockpit of a Cessna 172 or perhaps swimming in any body of water that she could find. She also has a deep love for buses of all kinds. Please send her buses. mercedes@theautopian.com Instagram: @mistymotors Twitter: @Miss_Mercedes30 Facebook.com/neonspinnazz
Read All My Posts »
PrevPreviousLet’s Talk About What’s Going On With The Weird Roof On The Triumph Stag
NextEverybody Meet Hangover Truck: Cold StartNext