Our Daydreaming Designer Imagines A Rivian With A Ram Revolution-Style Third Row, Except Bigger

With almost all new car debuts, there’s a great deal of hyperbole, yet based on looks alone the new electric RAM Revolution pickup seems to be living up to the hype and has captured the hearts and minds of many here at the Autopian.

The claims of the RAM’s performance as an EV cannot be verified yet, but we will say that one of its supposed ‘industry first’ accomplishments might be suspect.

The pioneering feature in question is right in the truck’s description: it purports to be a ‘three row’ pickup truck. We were wondering how Stellantis was able to make space where none appears to exist, and based on photos the answer seems to be that they just plain didn’t. We’ll reserve final judgement until we try it, but the ‘jump seats’ on the back wall of the cab seem to offer the kind of passenger space that one gets in the back of something like a Lotus Evora or a Maserati Merak. You will need to be lacking in any form of legs to be able to fit, even if you shove the other two rows closer to the windshield. These seats appear to make the joke third rows in something like an old BMW X5 look like the back seat of a Rolls Phantom. 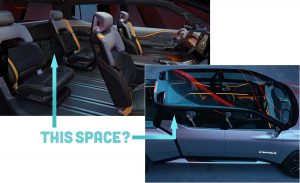 Certainly the concept of a pickup that also can truly carry seven or eight people seems intriguing, yet to accomplish this feat in a truck that stands a prayer of being short enough to fit in a typical garage seems unlikely. However, my guess is that most buyers will rarely have to carry three rows of people AND a full bed of cargo simultaneously. I have access to no market research, but living in a major metropolitan area I find that many people would want the versatility to change their vehicle magically from a pickup truck to a big SUV to suit their needs at that particular moment. I think I can make that happen.

One place to gain inspiration from is designs for station wagons or SUVs that could sort of convert to pickup trucks. This concept was last seen on the GMC Envoy XUV where the roof over the cargo area could electrically slide away to give you an unlimited ceiling in back. The design was actually copied by a car from fifty years before: the Studebaker Lark Wagonaire. Neither of these cars lived up to sales predictions, probably because they really didn’t offer a good compromise for truck and wagon. 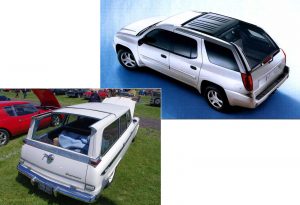 However, the sliding part is what I think is key to the solution. As a testbed for our idea, let’s start with a truck that features a unified body and bed design, the Rivian R1T. It’s a four door, two-row pickup truck with a normal (if small) sized bed.

Our model, which will be called the R1L, looks just like the standard model except for a raised roof rack-looking box on the top and some rails on the sides of the pickup bed (note that the front part of the rails is actually filled in).

Let’s say you want to carry a few extra kids to a soccer game or take a few extra coworkers to lunch- right now. Pop out your phone, go the Rivian app, and hit PASSENGER COMPARTMENT EXPAND. 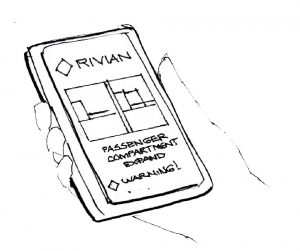 If the bed is empty, the rear window and back wall of the cab start to electrically slide back, and an extension of the roof slides out of that raised roof box. Eventually this section stops moving around halfway back of the bed. The big, gaping holes on the sides of this extension are then filled as glass windows electrically raise out of the side of the bed to seal off the area.

Let’s take another look at the steps: 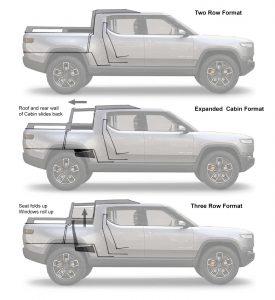 Inside, flip forward the rear seats (second row) and you’ll see that the front part of the bed is now inside that car and ready for your dirty junk to be placed into: 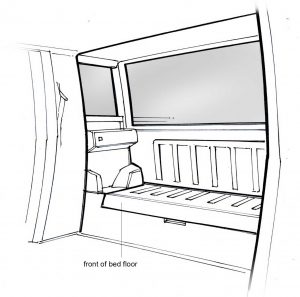 Or, you can lift open the floor of the bed to reveal a carpeted area, as well as side panels that flip out to cover the possibly filthy sides of your formerly outdoor bed: 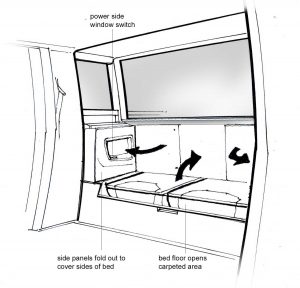 The carpeting is on the back of seats that open up for your full sized third row. Note that those flip-out side panels feature little armrest ‘fins’ as well as switches for lowering the side glass on those filler windows; if you’ve ever ridden in a third row of a vehicle in Arizona you’ll appreciate the opportunity to roll down your goddamn windows back there. 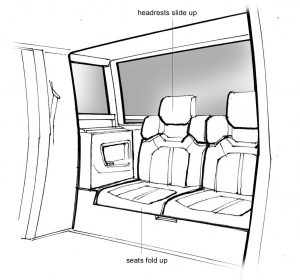 The only real compromise now is that the bed of your truck is about half what it was before, however if you really DO need to carry a full bed of cargo with your seven passengers you could get a fold-up cage to turn the lowered tailgate into an extension of your bed space.

Also, the Rivian’s famous ‘pass through’ hole is gone, but the space is still accessible by folding the rear seats forwards (this area becomes the footwell for the third row when deployed).

Strange as this solution might seem, it could offer enough to fit the needs of the typical suburban buyer most of the time. I truly hope that the new RAM really does live up to its industry-first passenger count claim, but if it turns out to realistically be less than promised then maybe someone else can use an idea like the above make the true three row pickup a reality.

Does A Daydreaming Designer’s Semi Sleeper Concept from 1990 Make Sense? – The Autopian

Read All My Posts »
PrevPreviousI Took On A Bad GM Design In A Hail Mary Attempt To Fix My Friend’s Suburban, But It Was Too Little Too Late
NextCamping Tech: This Startup Company Says It Has A Solution For Destructive Camper Tire BlowoutsNext