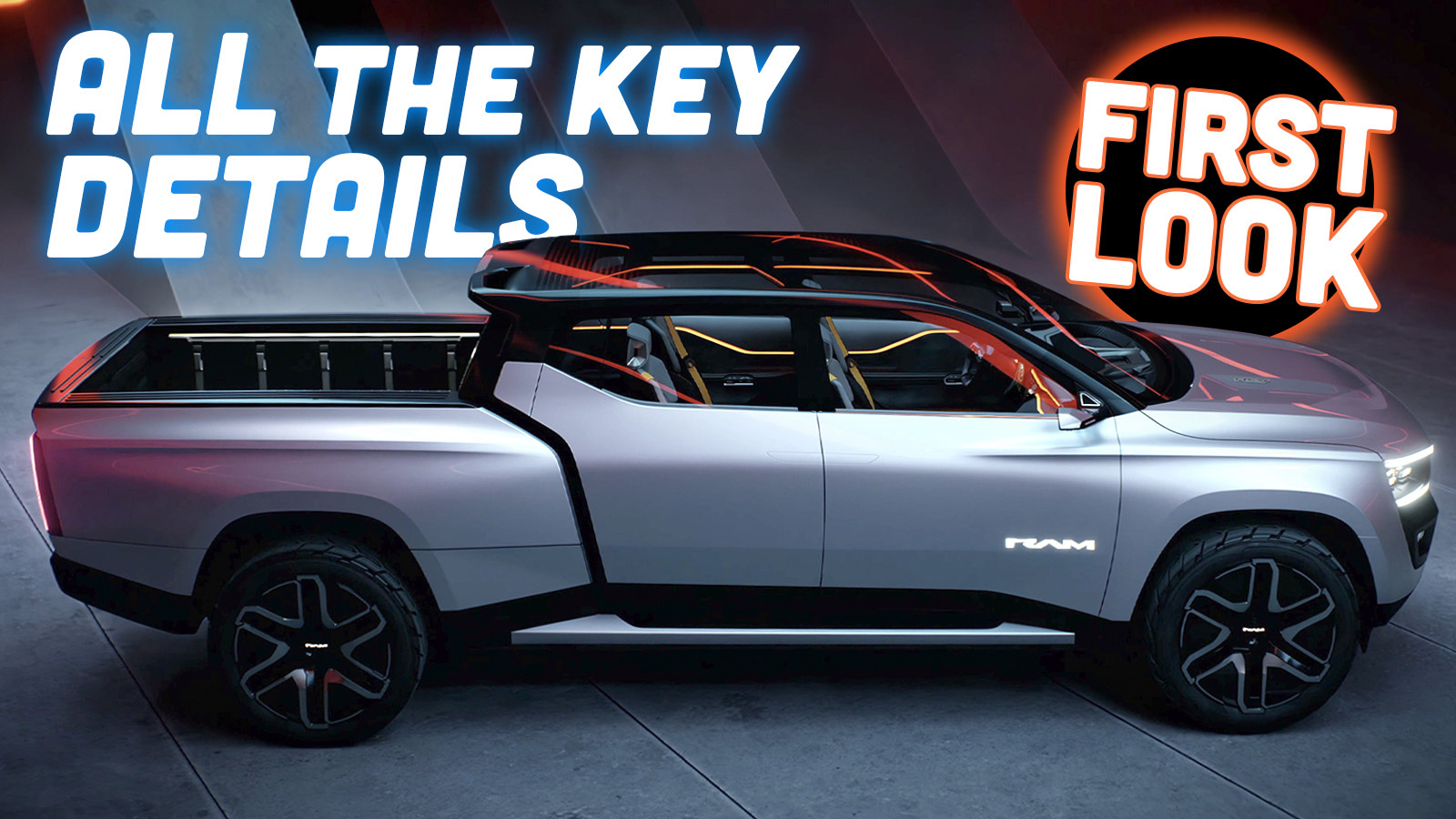 Electric pickup trucks are the biggest thing in EVs right now. Rivian struck first with the R1T, then GMC went big with the violently American Hummer EV. Next, Ford whipped out the white-hot F-150 Lightning, and Chevrolet is set to kick off production of the Silverado EV in just a few short months. Tesla also revealed a stainless steel douchedecahedron called the Cybertruck that was supposed to arrive two years ago but that still hasn’t happened yet. Given the way things are going, it might not happen until after GMC starts production of the Sierra EV in early 2024. Either way, everybody’s gunning for a share of that market and Ram won’t be left on the sidelines. While a production-spec electric Ram truck won’t happen until 2024, Stellantis’ truck branch just gave us a teaser of things to come with the Ram 1500 Revolution Concept. 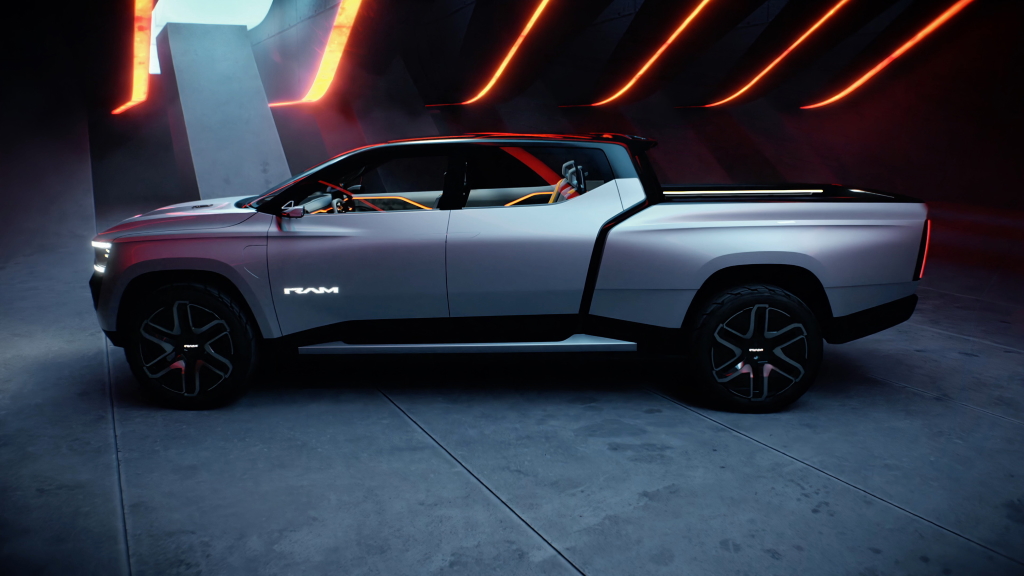 The first thing you’ll notice about the Ram 1500 Revolution Concept is how it looks quite different from any Ram you’ve probably seen. There are a few good reasons for this, so let’s start with the big stuff. Ram has pushed the base of the windscreen forward to create more room in the cabin. This results in a short dash-to-axle ratio which looks a bit dorky compared to the pickups you’re used to seeing but should be incredibly useful. It’s a similar move to what GM’s pulled with the Chevrolet Silverado EV and will no doubt become commonplace in the electric truck market. Add in bedsides that overlap the cab, and you end up with a very weird profile. 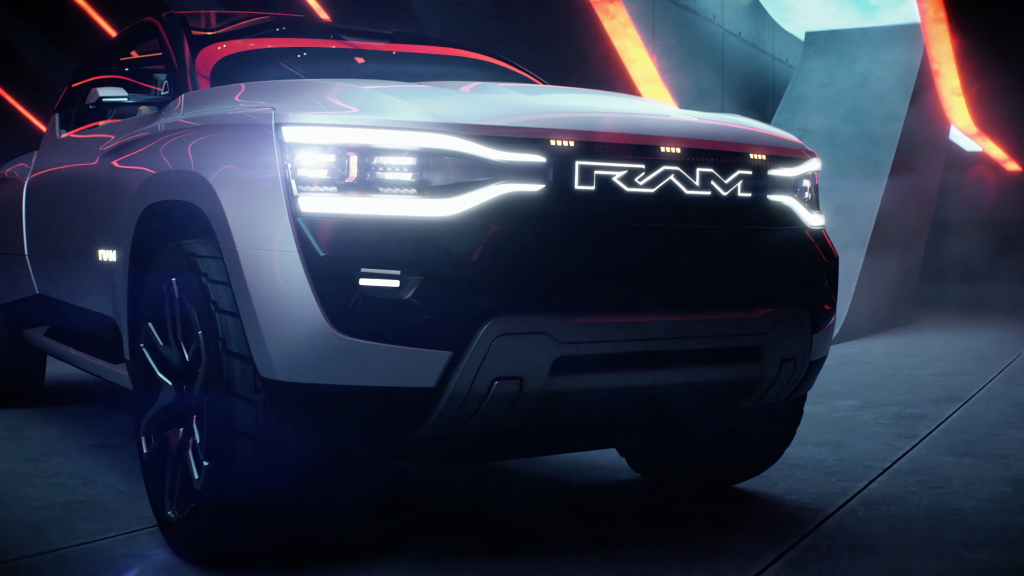 Up front, Ram certainly had a challenge on its hands with the relatively small cooling openings required on an electric truck. After all, this is the brand that pioneered the semi truck look, so we’re talking a reinvention after 30 years of consistent design language. The new front end treatment is a good thing, a lot more subdued than the big rig grilles you get on gasoline-powered Ram trucks yet still purposeful. The black textured plastic should hold up well against theoretical highway sandblasting and plenty of real estate is dedicated to functional lights. That fresh set of daytime running lights is supposed to look like tuning forks but I’m seeing more Ninja Turtle mask than anything. Who wouldn’t want a Ninja Turtle truck? 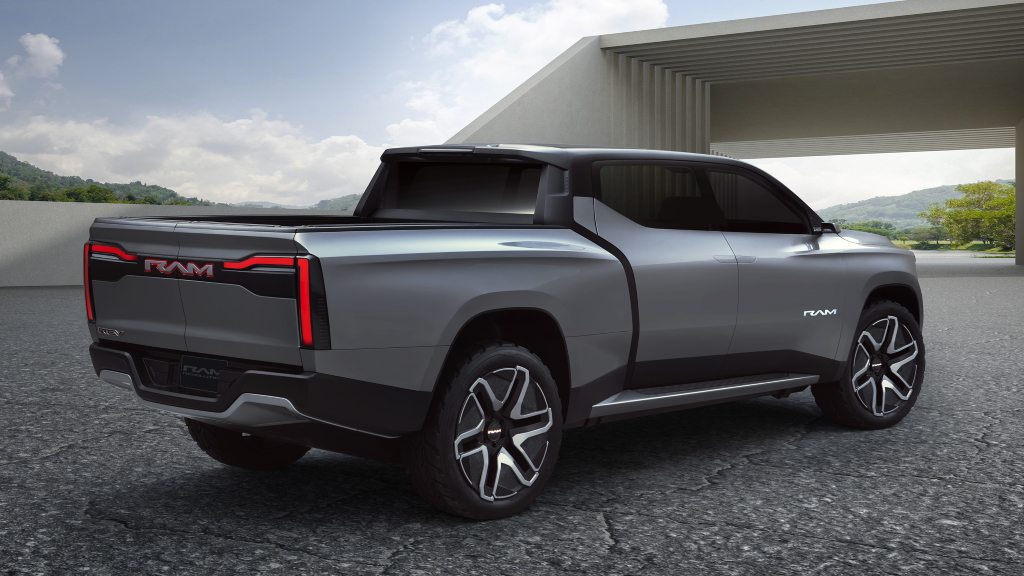 Around back, the tail lights mimic the daytime running lights, while a split tailgate with a built-in bed extender looks seriously useful and far more elegant than the optional split tailgate on current Ram models. It could be that the panel gap really tighter, but all the trim on the tailgate could simply be more distracting than just an emblem. 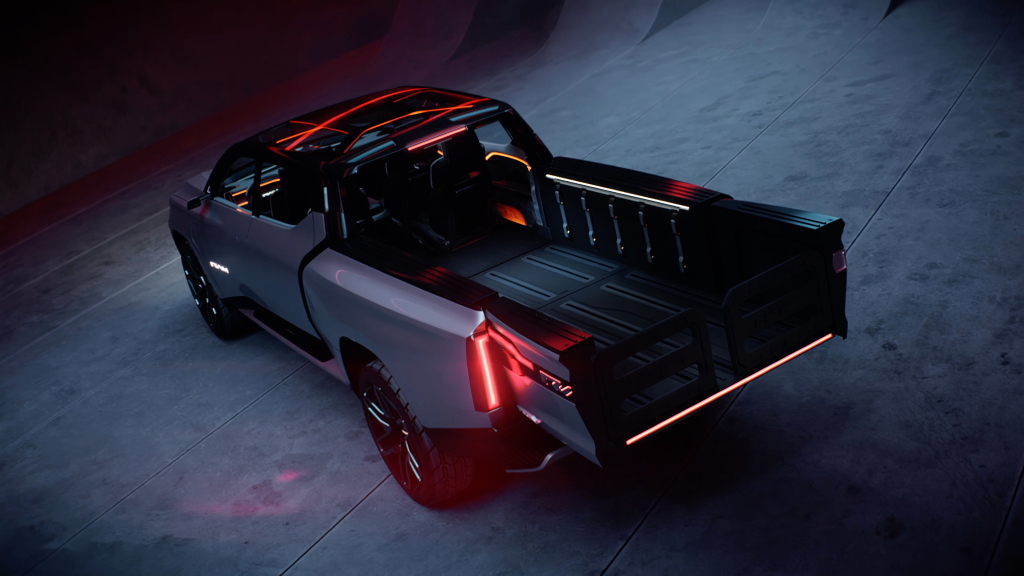 Let’s talk about the Ram 1500 Revolution’s bed because it gets weird. Upon first glance, there is a very noticeable seam between the bed and the cab. However, once you get a look inside the bed, you’ll notice that there’s a midgate just like on a Chevrolet Avalanche for extending the bed length to haul long things. The Chevrolet Avalanche had a shared cab and bed assembly, yet the seam on the Ram 1500 Revolution Concept suggests separation of cab and bed. What’s going on here?

As it turns out, a bit of assembly and a bit of styling. The team at Stellantis built separate cab and bed assemblies for the Ram 1500 Revolution, then joined them together structurally at the seam. However, the seam doesn’t just serve a structural purpose, but also an aesthetic one, recalling the separately-mounted cabs and beds you see on traditional pickup trucks. It’s a unique melding of form and function that gives us insight into how this special show truck was made. 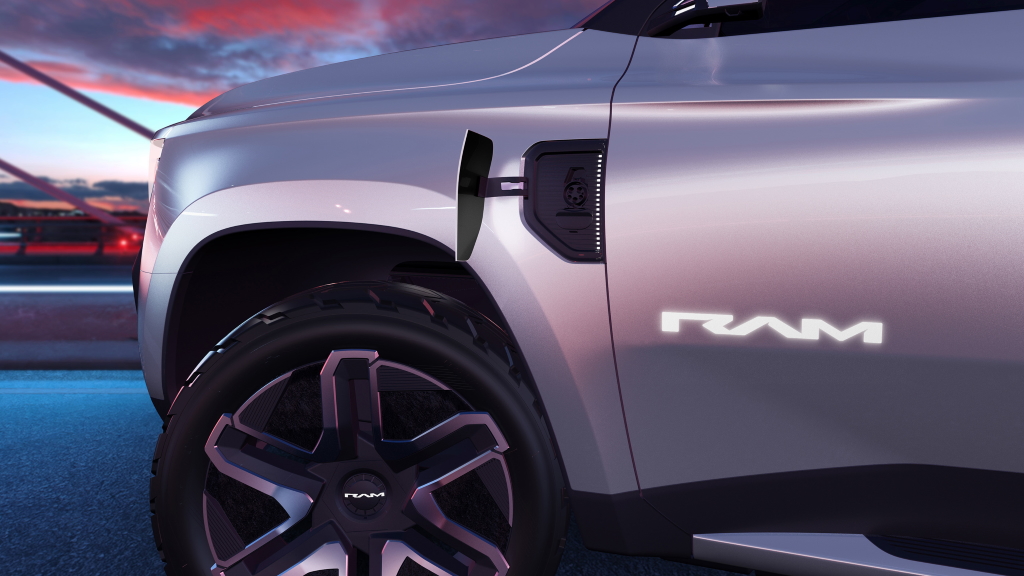 As for what’s underneath the sheetmetal, the Ram 1500 Revolution is a body-on-frame truck running on Stellantis’ STLA Frame architecture. If you’re not familiar with STLA Frame and how it slots into Stellantis’ long-term electrification plan, here’s a look at the company’s four vehicle platforms meant to launch Stellantis into the high-volume EV game: 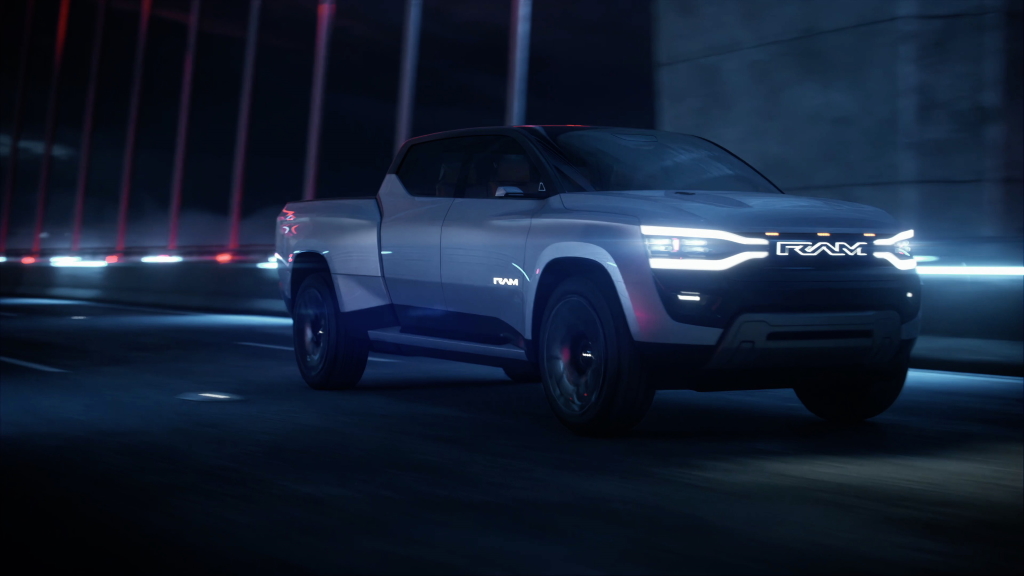 Since electric motors typically necessitate independent suspension unless you want an axle-mounted motor pushing unsprung weight into ungodly territory, Ram’s been able to give the 1500 Revolution a few tricks in the handling department. Not only does it get air suspension like posh half-ton Rams of today, it also gets four-wheel steering with 15 degrees of maximum angle on the rear wheels. Should be a doddle to park, then. Mind you, it won’t always stay where you park it. This concept has a function where it will follow you as you walk, illuminating the path ahead. Someone’s been watching The Love Bug, I see. 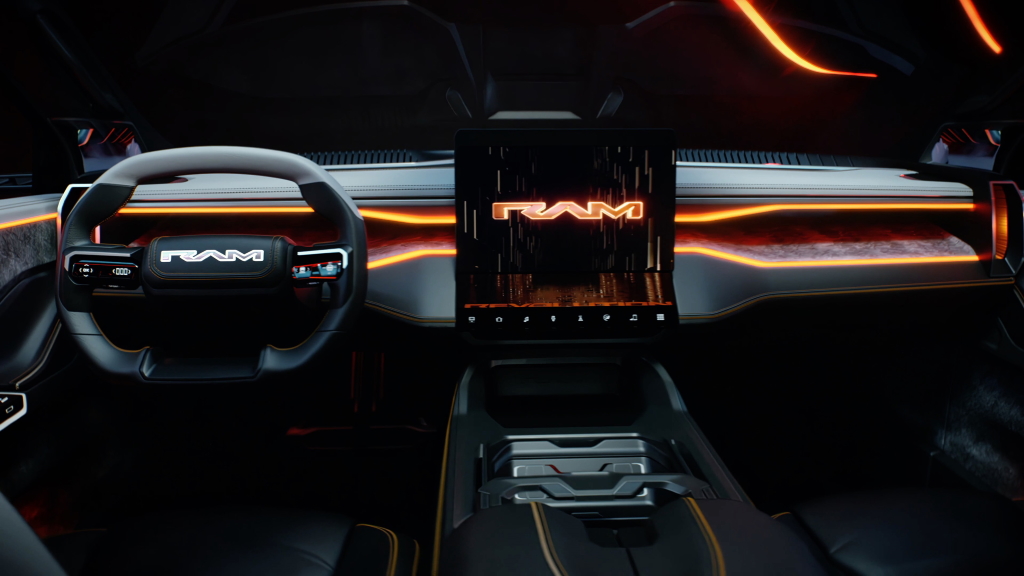 Move to the cabin of the Ram 1500 Revolution and it’s very clear that this is a pure show vehicle. There’s a snowball’s chance in hell that any of this glitz will be seen in a production truck, and some of it just seems strange. I mean, a retractable steering wheel? No gauge cluster? A detachable lower infotainment screen? Weird. Still, the multi-panel glass roof is quite neat and I like the idea of armrests that can slide forward and flip open to become tables. Imagine eating Taco Bell off of those bad boys. Oh, and I adore the rear-hinged rear doors, they add such a sense of drama and the lack of a B-pillar really opens up interior access. 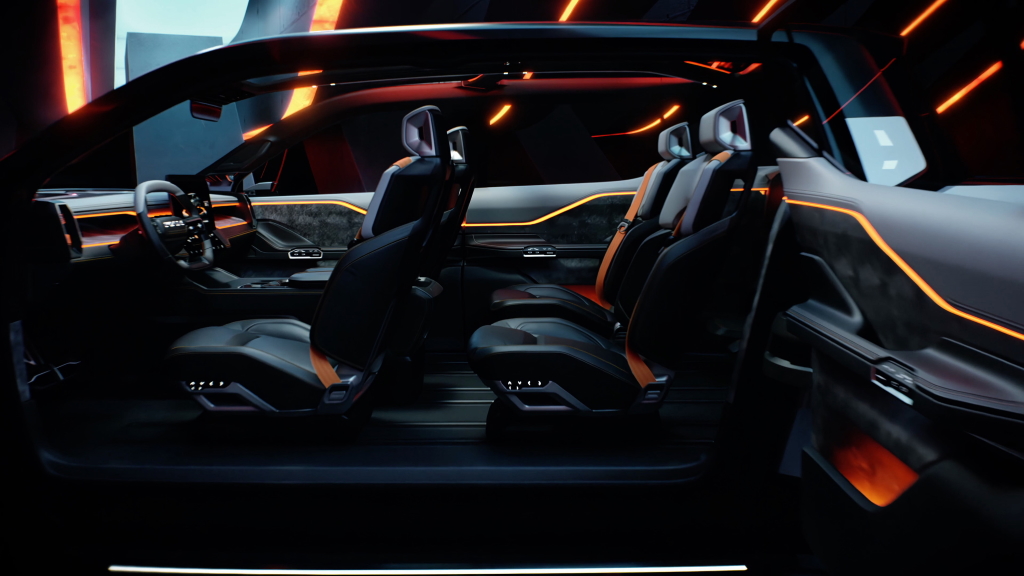 Perhaps the most unhinged idea on the Ram 1500 Revolution is the third-row seating. Attached to the mid-gate are flip-up jump seats that appear to offer all the comfort of the rear row in a ’90s extended cab compact truck. I’ll crop in on that photo above to give you a better look. 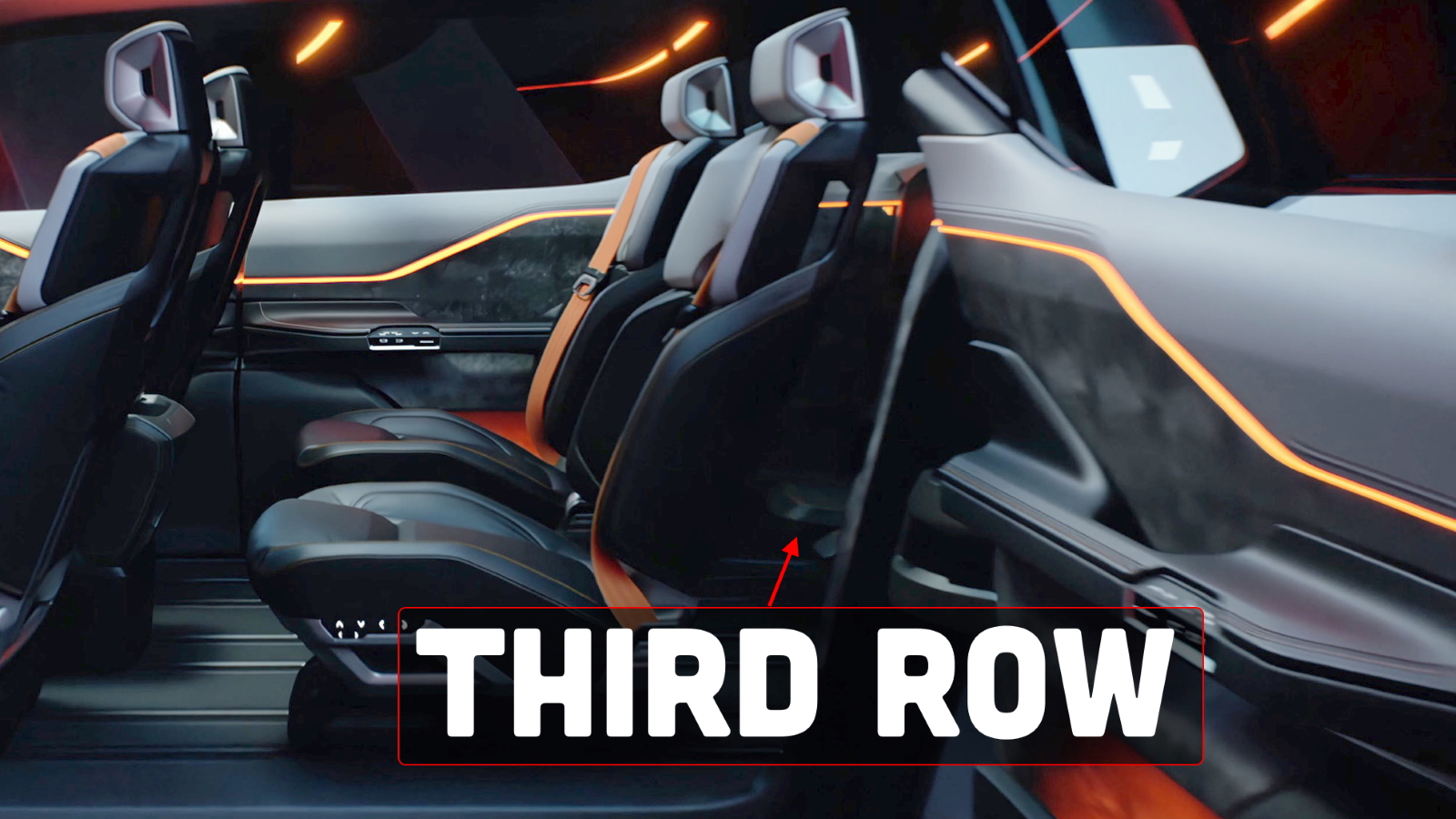 Given how occupants would surely be packed in like sardines, you’d think lawyers would immediately be up in arms over the concept. However, this is the same company that will sell you a 700-horsepower street car so long as your credit score is greater than two, so it looks like the streak of putting safety third shall continue. Hell yeah. 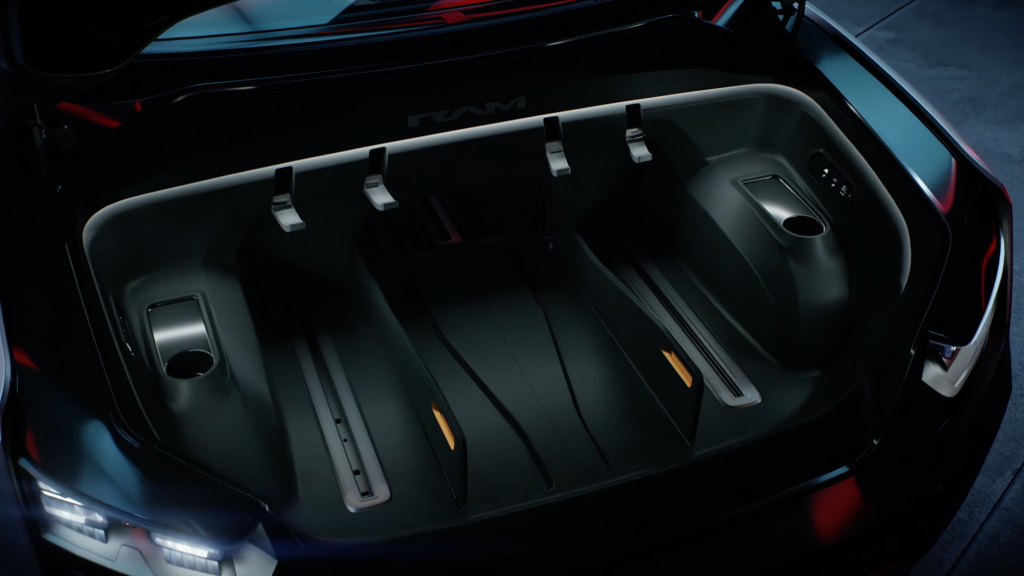 Speaking of hinged things, open up the front of the Ram 1500 Revolution and you’ll find a sizable frunk with some really neat storage solutions. Not only are there dividers and grocery bag hooks, but the frunk features two cupholders and a pass-through into the space occupied by the center console. 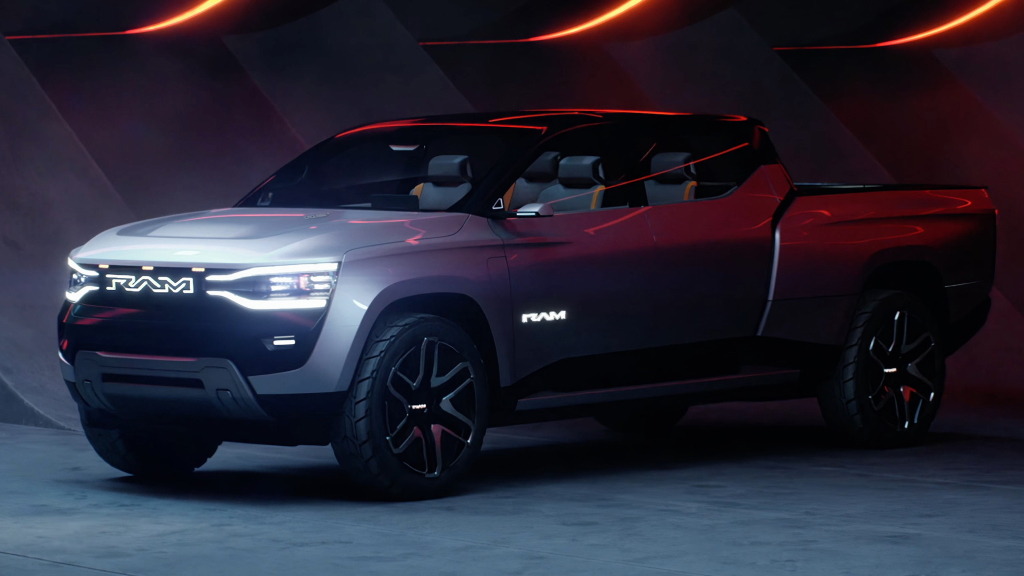 It’s worth keeping in mind that the Ram 1500 Revolution is still very much a concept. There’s no telling what styling elements will carry over to a production-spec electric Ram, although it doesn’t sound like a long wait before we find out. 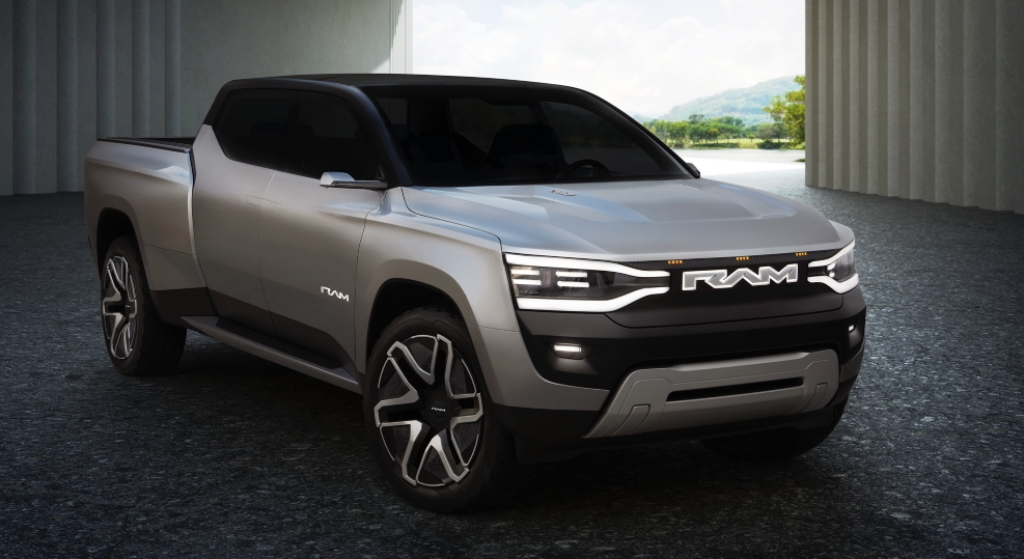 Ram states in a press release that the 2024 Ram 1500 BEV is “to be introduced in the coming months.” Hopefully the Ninja Turtle front end makes it to Ram’s first mass-produced electric truck.

Thomas is a Nu Rave-blaring, heel-toe downshifting, maple syrup-swilling, chassis-geeking, junkyard parts-hauling, floppy-haired scenester who's been writing about cars since college. His current ride is a 2006 BMW 325i with the six-speed manual gearbox. Instagram: @thomas.hundal Twitter: @thomashundal
Read All My Posts »
PrevPreviousOur Daydreaming Designer Imagines A Cybertruck-Shaped Camper Trailer That Almost Makes Sense
NextHere’s What Matt Farah Has To Say To You Forum Dorks Ripping On His Pink PorscheNext