We all know who Matt Farah is, right? Of course we do. He’s like everyone who loves cars’ friend who always seems to have more and better cars, but we’re not bitter. We’re excited! One of the exciting cars Matt has gotten recently is a new Porsche 718 Boxster Spyder, decked out in a remarkable color called Frozen Berry Metallic, which sounds refreshing and delicious. The interior is a rich, raspberry red, and the whole combination is unusual and striking and one that I think works extremely well. It’s fun and novel and I can’t imagine anyone seeing it and not smiling. Of course, thanks to the dark magick of the internet, I don’t have to imagine such an improbable reaction, because the collection of Porsche ninnies and fussbudgets that haunt online forums like Rennlist are full of people who are quite cross, quite cross indeed with Matt’s choice of color scheme for his own car, and they’re making their wrath clear online, in between bouts of filling their Depends tight as snare drums with indignation-poops.

I find these vitriolic responses puzzling, so I reached out to Matt himself to ask about his color choice, and give him a chance to defend himself and his car from the Angry Porschemen. I learned so much more than I expected. It’s good.

For some backstory, it’s worth mentioning that Matt getting this car hasn’t been an easy process, since this is really the second example of the car that was built, since the original sank into the unforgiving Atlantic when the ship that was carrying it burned and sank back in February:

I just got the call from my dealer. My car is now adrift, possibly on fire, in the middle of the ocean. https://t.co/Ge2DYk8IJ0

Remember that? That was bonkers. However Porsche made good, and Matt’s novel ride is now here. And now that it’s been shown off a bit, here’s some reactions from the Rennlist forum: 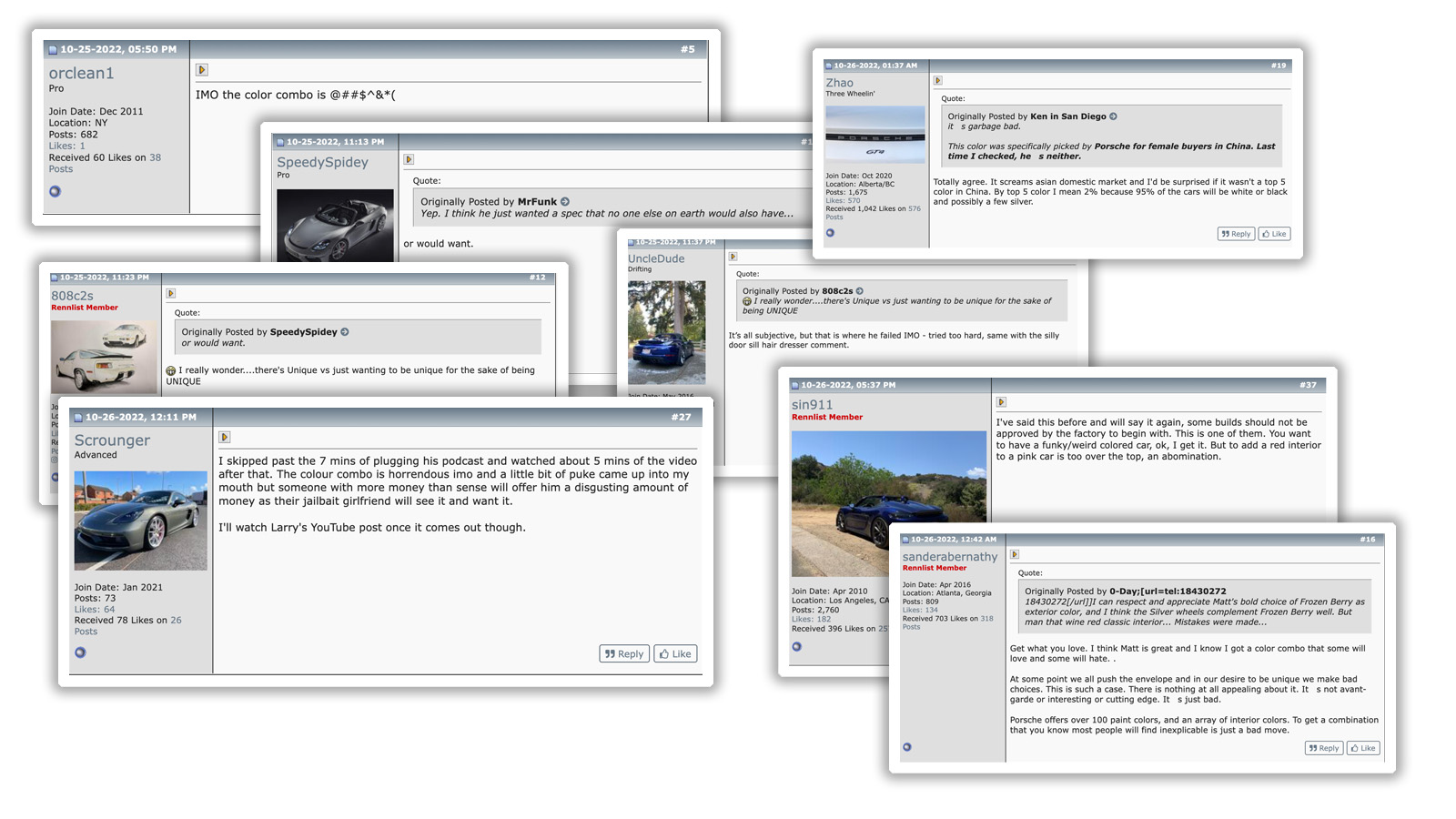 As you can see, there’s plenty of people who don’t get it. Which is fine! It’s not supposed to be for everyone! But there’s also plenty of people who don’t just not get it, they don’t want anyone to get it, ever, and say things like “…some builds should not be approved by the factory to begin with,” or “a little bit of puke came up into my mouth” (which I bet isn’t true, I’ll need a puke sample to confirm that (looks at notes), Scrounger) and people speculating that somehow Matt couldn’t have actually wanted this, he just bought a whole car to, you know, be weird.

As someone who firmly believes that cars deserve to be in colors, real colors, not just the grayscale hell that defines nearly every silvery-gray piece of shit on the road today, I cannot fathom why there’s these sorts of angry, indignant reactions. It looks good! It’s fine that it doesn’t look like every other Boxster out there. And if seeing a car in this interesting color-shifty, powdery pinkish color is actually making you vomit, get off fucking Rennlist and go see a doctor, immediately, because I think something is up with your gastrointestinal tract.

Matt actually tells a bit about his decision process for the color in this video, right about at this time marker here, and it makes a lot of sense, I think:

But you know me, I like to really know stuff, and to really know anything, I needed to hear what Matt himself said. So I reached out, and he gave some really interesting and in-depth answers that I think you’ll enjoy. Here’s what he said:

There is a back story to my color. I think it’s important that people undertstand that everywhere in my life, I like to have little easter eggs to other stuff. If you come to my house, there are mementos and links to other things and places in my life that I find interesting, and I commit to them, I go all the way with them.

For instance, I have a literal Demolition Man themed bathroom. There is a shelf with three seashells, there are original storyboards from the movie, action figures, the comic book, a blockbuster DVD of the film, and even one of the “San Angeles” license plates off one of the movie cars.

[Editor’s Note: Let’s stick a link to the trailer for Demolition Man in here, just so we’re all on the same page. You’re welcome. – JT]

As you may know, I had a Keen Safari 911. It was Cassis Red over Burgundy interior, which I accented with purple confetti bus fabric. If you just told people that color combo without them seeing it, they would think i was insane, but it was actually stunning in person, and became wildly popular.
I showed that car to a longtime Porsche dealer friend of mine. He said, “Is that Cassis Red? Man we couldn’t GIVE that color away in the 80’s. I drove one as a demo for six months because it was unsellable.” Of course now, we know the color was just ahead of its time, and it’s absolutely stunning, and if you want a cassis red G-body 911, there is a literal $25k premium for such a thing.

When Frozen Berry Metallic came out on the Taycan, I felt exactly the same way about it as I felt about Cassis. This was a transformative, stunning color that radically shifted tone depending on the sunlight, didn’t photograph particularly well, but glowed radiance in person.

So when it came time to order the Boxster Spyder, I was absolutely shocked to learn that FBM wasn’t just available for the car, it was FREE. This is not a PTS color. It was listed, for 2022 model year only, as a standard color. People are out there paying $13k for PTS grays and silvers and blue, and here is this incredible color that is literally free, and because it’s kinda pink, no one is gonna have the balls to buy it. It’s literally the Cassis Red thing from the 80’s all over again.
And because my Cassis Safari car had the red interior also, I knew for certain that no matter what other people thought, and no matter what the configurator looked like, that the FBM over Red would look ace in person.
Plus, I was always going to do the insane Deman 4.5L motor. So the idea of a pink car with a red interior and a hot rod 565 HP engine under there was just hilarious to me.
So that’s the story. there’s a connection to my previous air-cooled car, continuing that lineage of my porsche’s being this color. There’s the fact that I predicted the color would be rare because people weren’t brave enough to buy it en masse, which is true. Porsche told me that less than 10 spyders were sold in this color in 2022, that mine is the only one with the 2-tone spyder classic interior. The color has been cancelled entirely for 2023.and of course there is a long history of Porsche race cars being pink too (Pink Pig, etc)
I think the theme is just that there’s layers to it that people who don’t seek to find out will easily miss. yes it’s a cool color. yes it’s unique and rare, but it’s also got a personal connection to my history with the brand, and a built-in prediction for rarity, and a little bit of anti-toxic masculinity too.

I'm a co-founder of the Autopian, the site you're on RIGHT NOW! I'm here to talk to you about taillights until you cry and beg me to stop, which I absolutely will not. Sorry. Hug? Also, David's friend.
Read All My Posts »
PrevPreviousThe Ram 1500 Revolution Is A Three-Row EV Wondertruck For The Future
NextI ‘Afeela’ Like Sony Could Have Come Up With A Better Name: Comment Of The DayNext