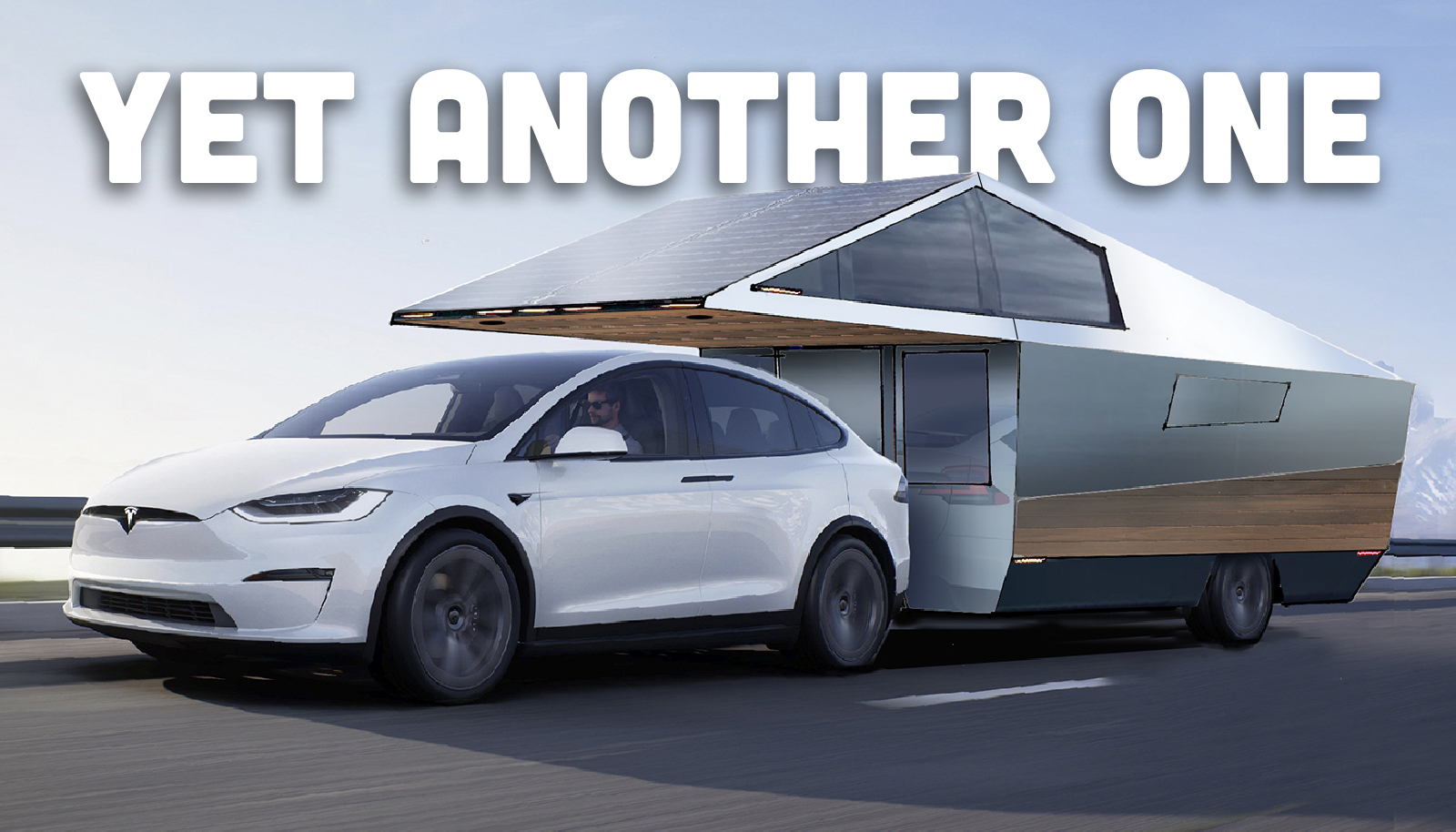 The shape of the Tesla Cybertruck makes for a better tiny home than a motor vehicle: prove me wrong.

Finding ways to criticize the looks of Elon’s late-to-arrive pickup concept is like shooting fish in a barrel. However, despite the endless assault on the design, it’s not that basic form is necessarily bad; it’s just misused. A fez, for example, is a fine thing to wear to a Shriner’s convention but attempting to use the design for a crash helmet would be ill advised. Trying to turn something that looks like an architect’s vision of a modernist metal-clad residence into a motor vehicle is an equally poor choice. The Cybertruck doesn’t even look like it should have wheels.

So if the Cybertruck could make a better house than a car, what if we used the basic shape to make a tiny home, and one that could be a mobile?

There have also been numerous proposals of campers for the Cybertruck; a mind boggling number actually considering that a production version of this elusive truck is currently as real as the Easter Bunny. We reported on several, including one that has an interior which seems best suited to performing autopsies in: 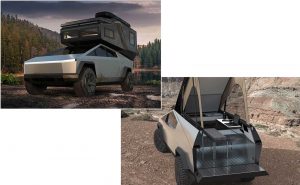 One firm has obviously tired of waiting for Elon’s dream to appear and already made a camper trailer that echoes the shape of the Cybertruck.  It’s very much a case of the shape applied awkwardly to something in a manner that runs counter to its function; there’s barely any headroom in the front and back ends: 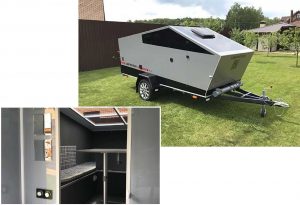 This lack of success in making a viable camper to fit a truck that is not yet for sale, or even making a camper trailer that looks like the Tesla truck, is not stopping me from attempting a concept that might actually make sense.

I’m envisioning something that takes inspiration from an unlikely source. In the early seventies, an innovative manufacturer released the Harmon Shadow trailer. This highly maneuverable camper featured a ‘fifth wheel’ style hitch oddly mounted to the roof of the tow vehicle. 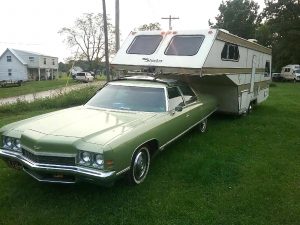 You might think that pulling a ton or two of camper by your car’s rain gutters would be a bad idea, and you’d be right; we can assume bent roofs are the primary reason that the company died. Still, the idea of a sleeper area cantilevered OVER the passenger compartment of the tow vehicle seems like an interesting idea, if you could make it work with a standard hitch. That way you get extra bunk space for two more people in the length of a smaller trailer.

Below is the basic standard-hitch concept I’m proposing. The overall appearance is very similar to the Cybertruck, but you can see that the peaked roof actually makes functional sense in the trailer. It’s taller in the middle where you get into the loft space but tapers down to nothing where your feet just don’t need as much space (and it’s lightweight so the cantilever isn’t adding much mass, easily counterbalanced if needed by the water tanks and/or batteries in back). Also, the fact that it tapers down in front cuts through the wind, and the top surface is covered in solar panels (charging either batteries on board or to pump into your EV). All US states allow for trailers up to thirteen feet tall, and this one would be well under that at the tallest point. 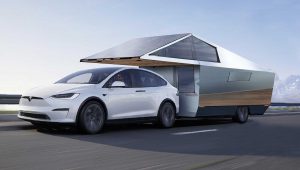 Tesla and The Bishop

I’ve added just enough wood trim to the lower flanks to add a ‘tiny house’ feel without looking too much like you’re towing a cottage. There’s even wheel skirts that can cover the tires when you’re parked at home (for looks and to protect the rubber from UV rays). The lower side windows are covered in silver tinting film to blend in with the metal finish. The air conditioning unit is partially recessed into the roof on back. 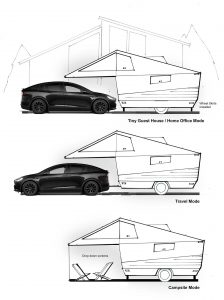 One additional benefit of this overhang when the trailer is stationary is that there is a covered area under the cantilevered sleeper. The tow bar is designed to slide under the trailer and stow away to make all of this area usable. This space would be ideal for covered outdoor dining at a campsite or even outside of your home, and drop down screens could provide a mosquito-free porch space. There’s an area for an optional flat screen and even ethanol-fueled fireplace to make it especially cozy. 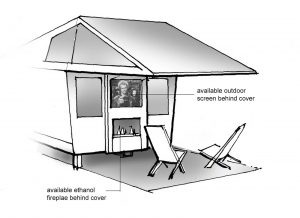 Also, if you’re putting this thing in your driveway, it takes up far less space than a typical camper that sleeps six as you can park at least part of your car under the overhang (or even a whole car if a Smart Fortwo is in your stable). If you park nose first it will keep the sun and precipitation off of at least the front of your vehicle (great for a Tesla where there’s no engine heat to melt the snow on the hood or windshield).

There could be different front sleeper sections available, and they could be removed and replaced like the bolt-on options on a late eighties Nissan Pulsar NX. The shorter sleeper would require a much tighter sideways sleeper, less open overhead space inside, and generally speaking be more camper than tiny home, but it would still work:

Also, our resident RV expert Mercedes Streeter commented that with the longer cantilevered sleeper there might not be enough room to change pitch to get into some campsites or steep driveways without the top of the Tesla making contact with the trailer. Semi-jokingly she suggested ‘articulation’, unaware of the fact that insane ideas are what I go for. I mean, the Concorde supersonic airliner required a pivoting nose to allow pilots to see out on landing, so why not allow this to pivot on electric screw-jack lifts mounted to each side for the extreme cases where you need the room? It’s a pretty simple mechanism, honestly (have you seen the slide-outs on higher end campers?), and the nice thing about this is that if exclusively towed by Teslas the car should sense these pitch changes (or if you try to drive into a drive-thru or parking garage and forget the height) the car will just stop and make adjustments (or stop if it sees a billboard with a stop sign on it…sorry).

The basic floorplan is similar to something like a 16 foot Airstream Bambi or Caravel, but with the addition of the upper bunk area.

You can see in this view below (in long sleeper format) the ladder on the closet door to get you to the loft, and looking into the first floor ‘bedroom’ (with sliding privacy door): 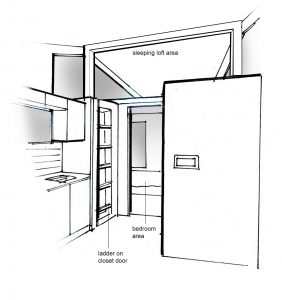 The dining table can sink down to create an extra sleeping space or raise up high to make a standing desk for you to use when this is used as an outdoor home office. Do not ask me ‘if this thing makes contact with my house can I write off the camper as a home office business expense?’ Asking a designer for tax advice is like, well, asking a designer for tax advice. Still, it’s a quiet place to do Zoom calls so there’s that.

I’m skeptical about when and if the Cybertruck will ever appear, and the camper solutions provided so far have been underwhelming. However, I’m as surprised as anyone that the shape is almost ideal for a sub-5000lb (the Tesla Model X’s towing capacity) trailer with more than a few tricks up its sleeve.

One thing is certain- we haven’t seen the last of the Cybertruck campers, even if the truck itself never appears.

The Cheapest Tesla Cybertruck Camper Concept Yet Is A $24,000 Truck Cap That Might Cook You Like Bacon – The Autopian

I Saw The Prototype Tesla Cybertruck Up-Close. Here’s What I Thought – The Autopian