I Saw The Prototype Tesla Cybertruck Up-Close. Here’s What I Thought

One of the great things about going to LA for the car show (we still have Autopians there, by the way, so stop by) is that you can also sneak your way into other fancy car-events, like the opening of the new Tesla exhibit being hosted at the Petersen Automotive Museum. David, Mercedes, and I managed to worm our way into the event, greedily downing the free sliders and guzzling booze we didn’t pay for, and checking out a sort of unlikely museum exhibit for a company so young. Still, it’s an important one, and despite being surrounded by a lot of Tesla fans who may not have minded so much were I to choke on one of those free sliders, the event was fun and the exhibit interesting, especially because it offered me a chance to inspect the Cybertruck prototype up close. Which I did.

Now, I can’t say I’ve ever been a fan of the Cybertruck‘s low-polygon, rendered-on-a-Super Nintendo-with-the-Super FX-chip look, but I do appreciate that something so unexpected and bold exists. Well, might exist. Sometime late next year, probably. Maybe. That said, you can’t ever really judge a car or truck’s design until you’ve at least encountered it in person, so I was very pleased to finally be next to this big stainless steel beast.

This Cybertruck is that very first prototype shown back in, damn, 2019. Since that time, there’s been at least one revised version built, which has essentially the same look and size but differs in many details, ssome of which I showed here when I wrote about it for The Old Site: 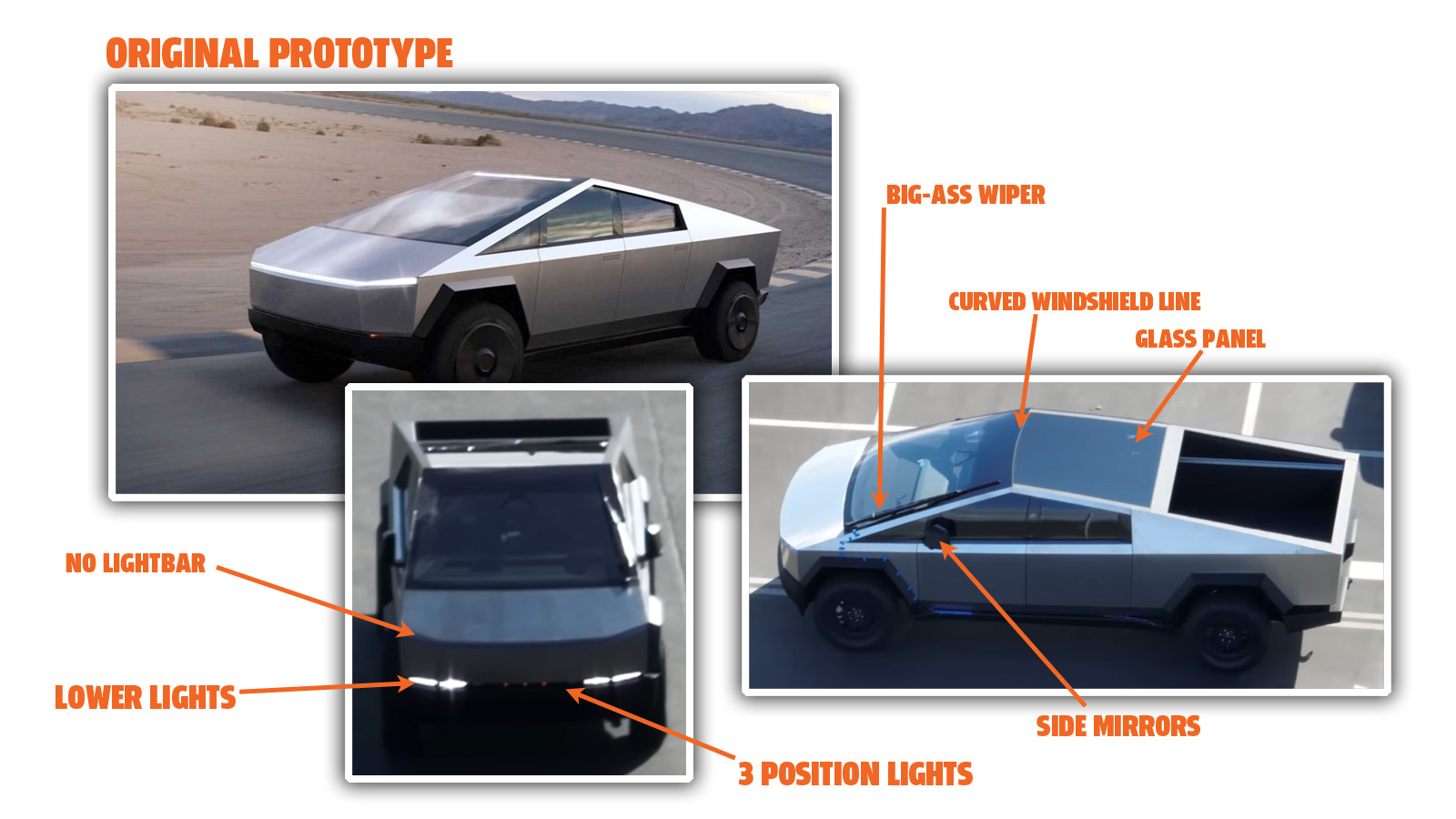 I mention this to be clear that the Cybertruck I saw is that first prototype, and as such is an over three-year old one-off, so I don’t think – I mean, I really hope – we can’t take its build quality and every design decision as a likely indicator of what a production Cybertruck will be like. And that’s important to note, because this thing is not exactly reeking of quality, if you know what I mean.

Here, look at this shit: 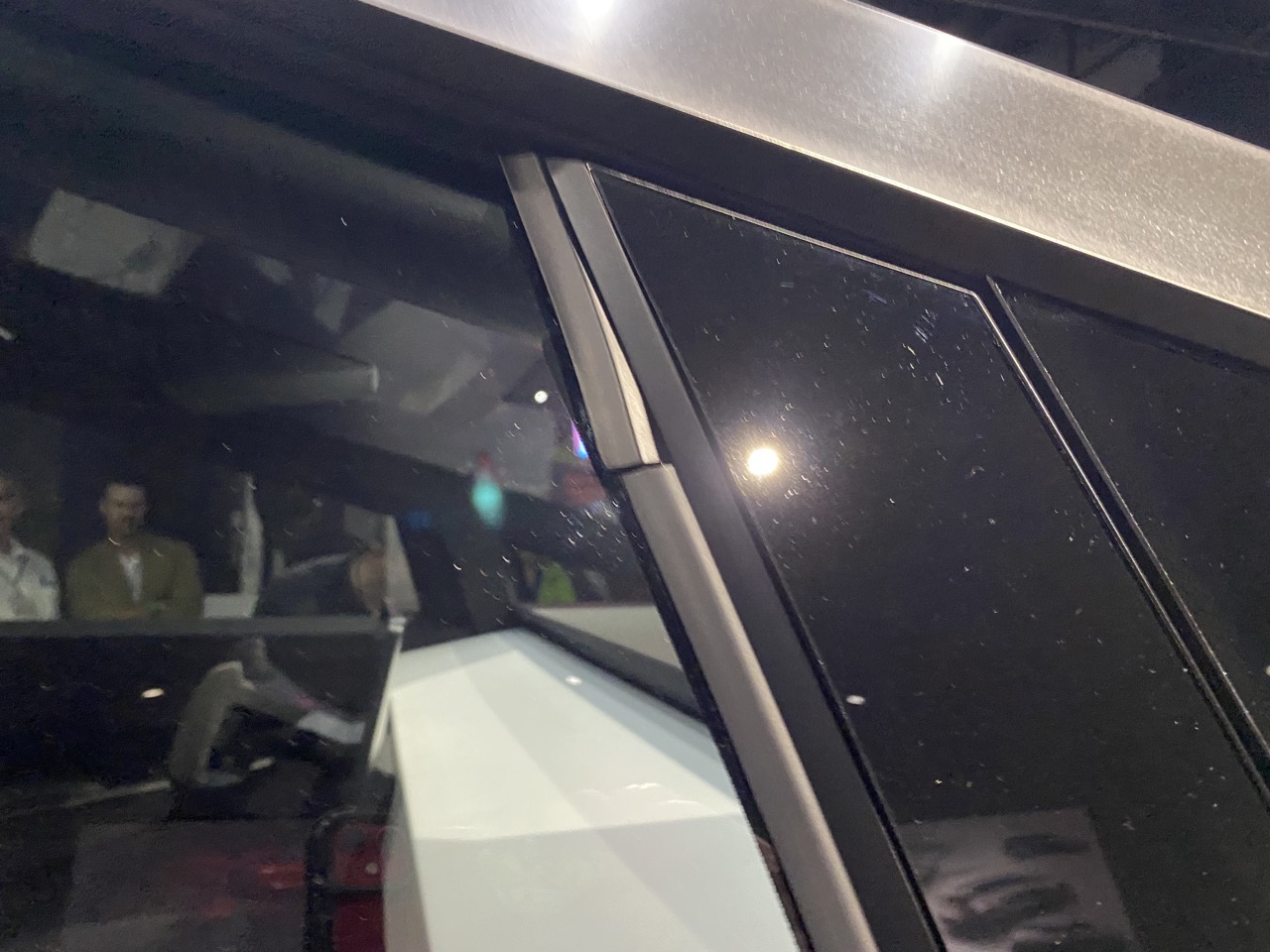 Oy. Did they run out of window rubber and were too cheap to get a new roll, so they just stuck in a scrap? 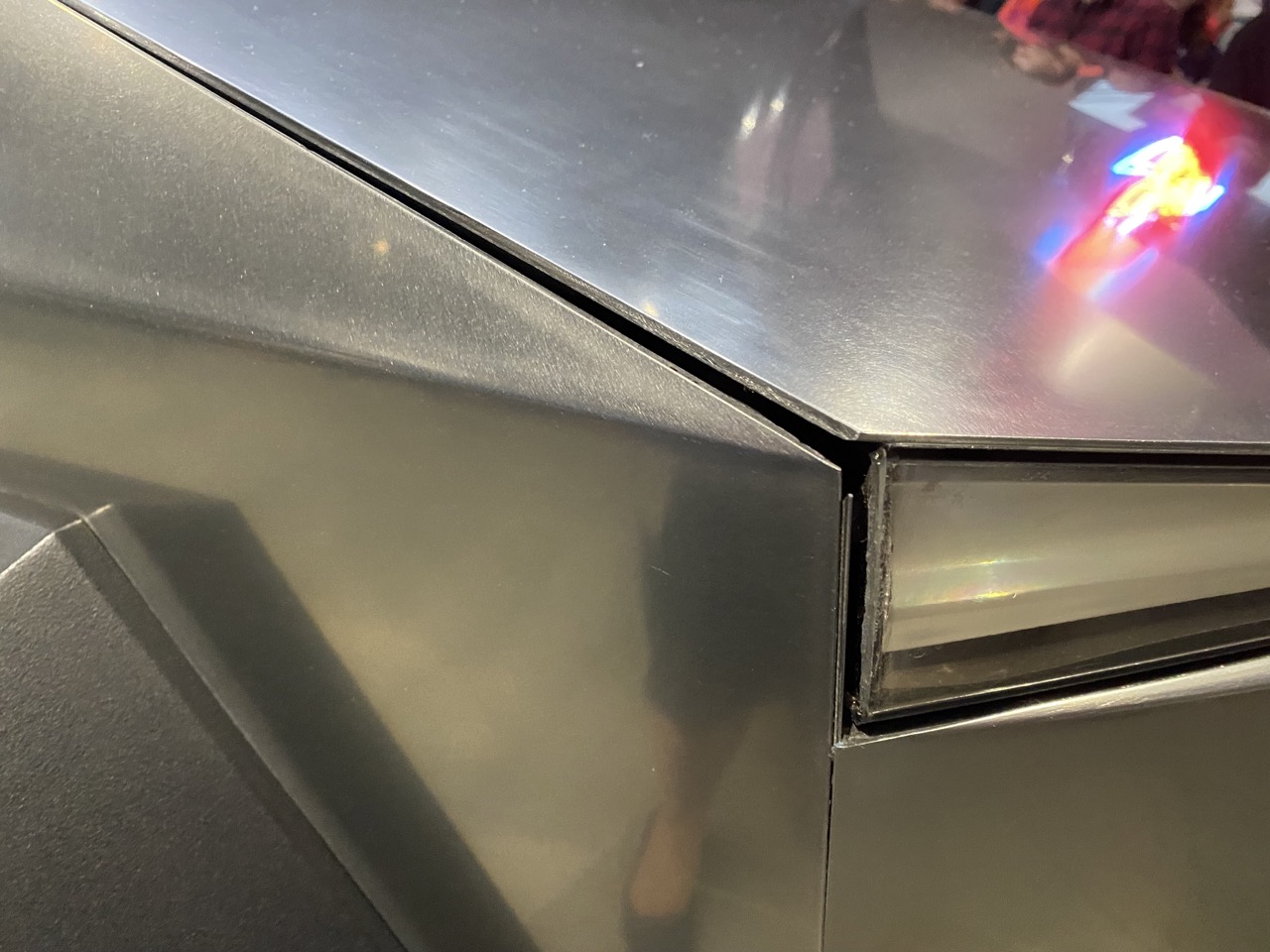 I’m not sure if the frunk actually opens on this, but it kinda looks like someone tried to jimmy it open with a crowbar. 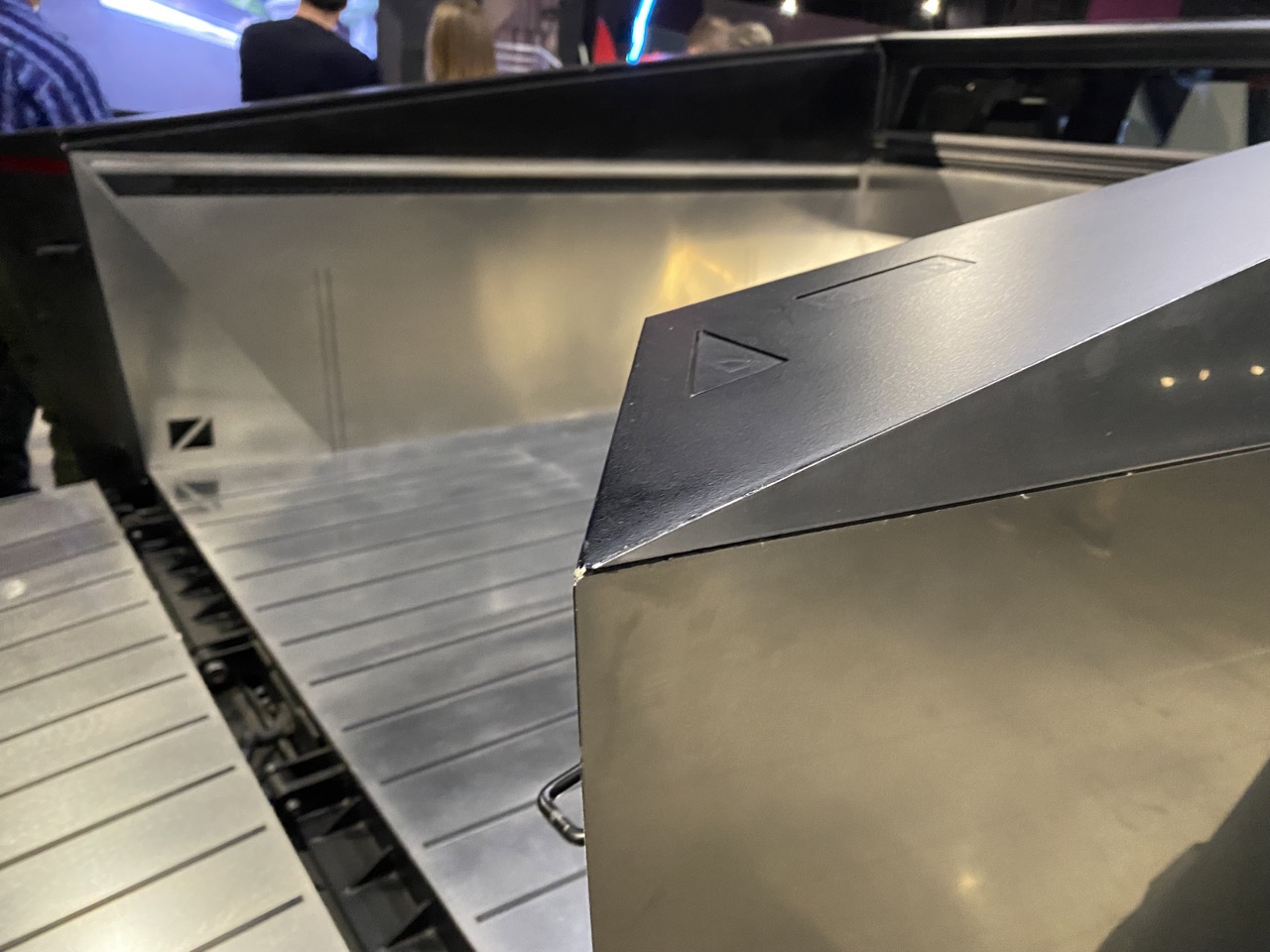 Also, so much of this thing is sharp, and I don’t mean that metaphorically, I mean that literally. The Cybertruck is full of edges and surfaces and points that want to puncture you. It’s like a gleaming steel riot of stabbing and pinching opportunities everywhere you look and touch.

Some of our auto industry professionals on staff had a lot to say about the Cybertruck prototype when I showed them pictures, but I think the crucial takeaway is: Maybe it would have been better not to show anything at all instead of this. Ouch. 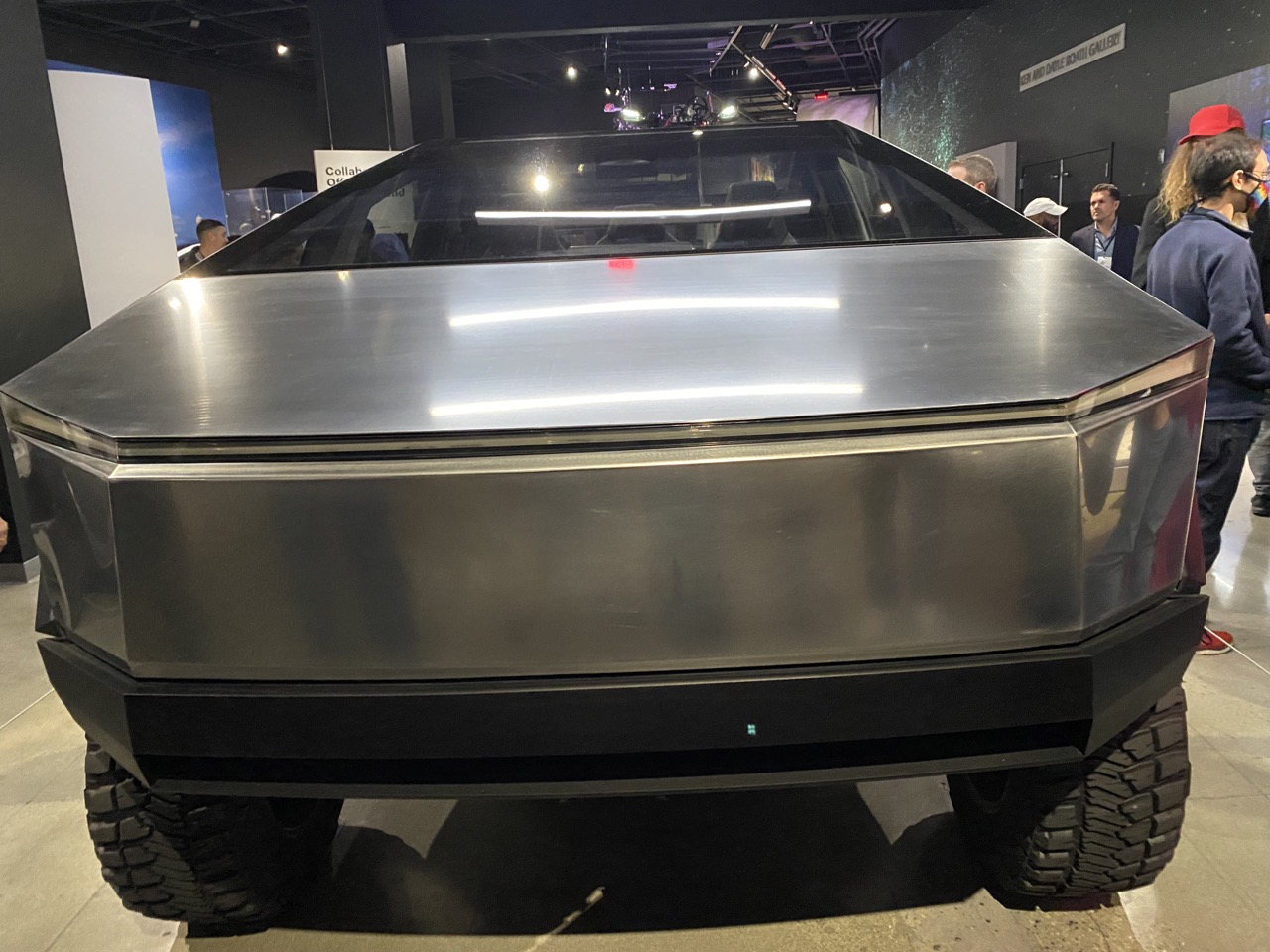 Now, I don’t know if I agree in the case of the Cybertruck, because it’s become such an icon to hardcore Tesla fans, but maybe I’d have made the exhibit so you couldn’t get closer than about ten feet away from the Cybertruck. I bet that would help with liability, too, because I pity the kid that trips and takes a header into this thing.

What I suspected about the Cybertruck from the beginning hasn’t changed much after seeing the thing in-person: I don’t think its fundamental design lends itself well to being, you know, an actual truck. A truck that does actual truck things, like having large objects loaded into and out of it.

Walking around the Cybertruck, it feels more architectural than automotive; its massive bulk is unrelenting, and while most modern trucks are absurdly huge, only the Cybertruck really presents you with large, nearly featureless walls of steel. The proportions are 3/4 cab and hood, and 1/4 bed, and that bed is walled in like a medieval city. If anyone has ever, say, helped a friend move from an apartment and had to load a couch into a truck bed while parallel parked on a road, I think you’ll be happy you didn’t do that in a Cybertruck. 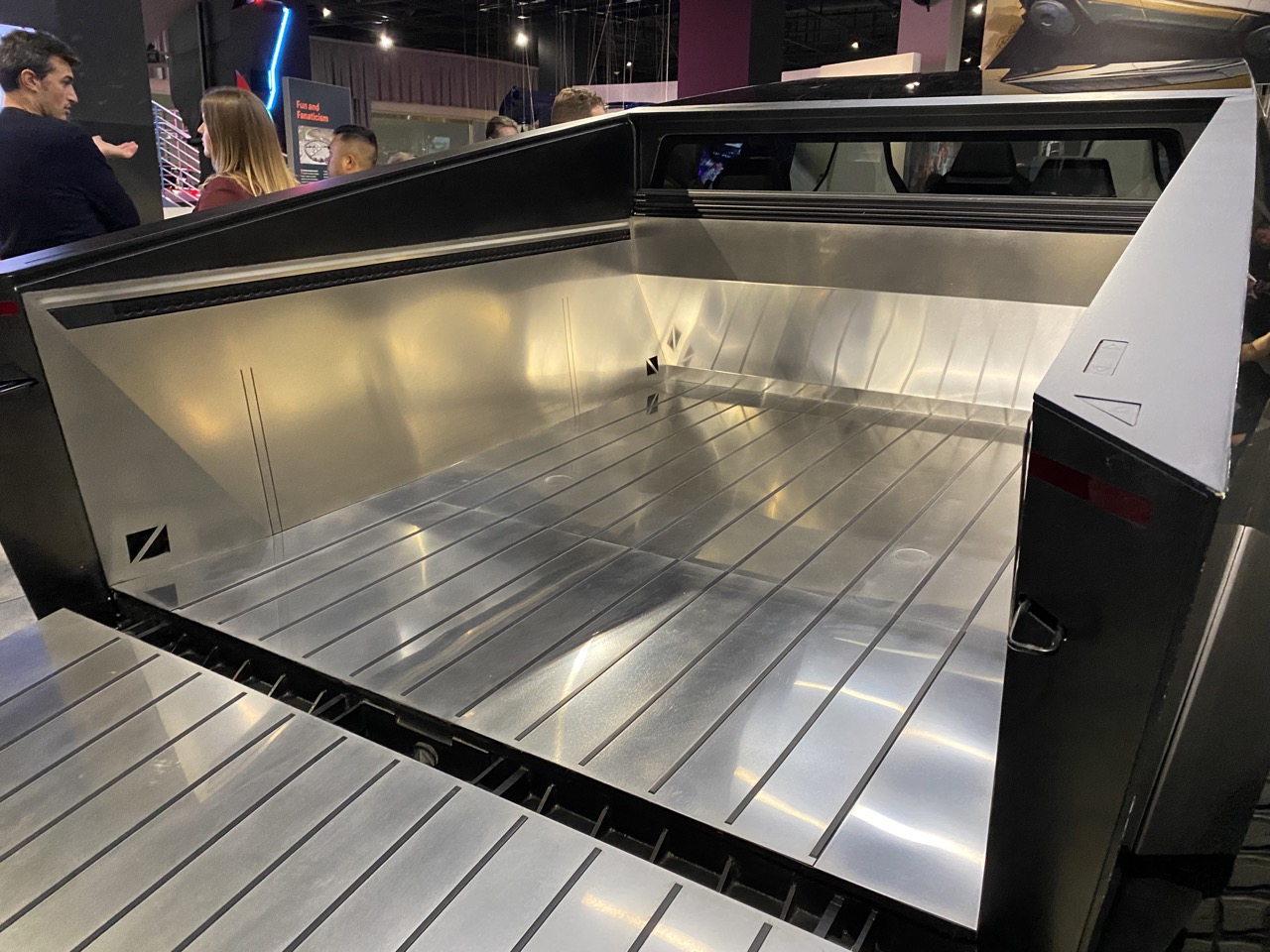 Loading something via the side of the truck would be a massive ordeal, and possibly painful, too. If you’re leaning against the sides of the truck while you’re muscling some heavy, ungainly thing in, you’ll have sharp edges and pointy things jamming into your tender flanks. 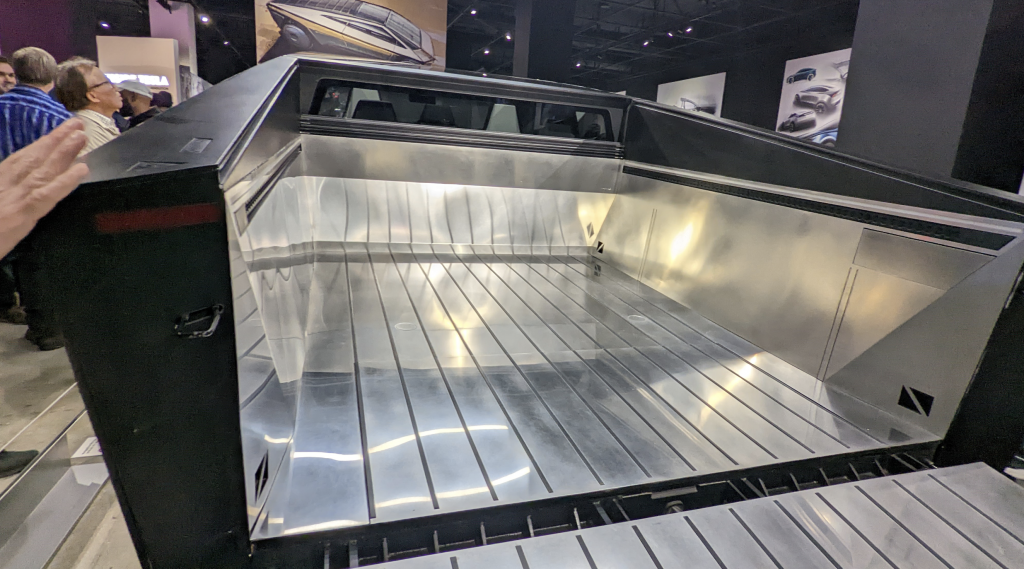 Also, where would you step to reach up and over the sides and into the bed? I guess you’d climb on the tires? That can work sometimes, I guess. And if you load exclusively via the rear, the tailgate design has all the same unforgiving issues of the rest of the truck. Would you want a bedliner in this? I suppose the lack of rear wheel humps is nice, though, as it’s a perfectly rectangular bed floor.

[Editor’s Note: Packaging fetishists among you may have looked at the photo above and spit out your Fruit Loops. “Oh god, the wheels don’t protrude into the bed, meaning the bedsides are rather thick. What a waste of space!” you might exclaim to your six-year-old who couldn’t care less. “This is a tragedy! Even the old Chevy Avalanche used this space for storage!” 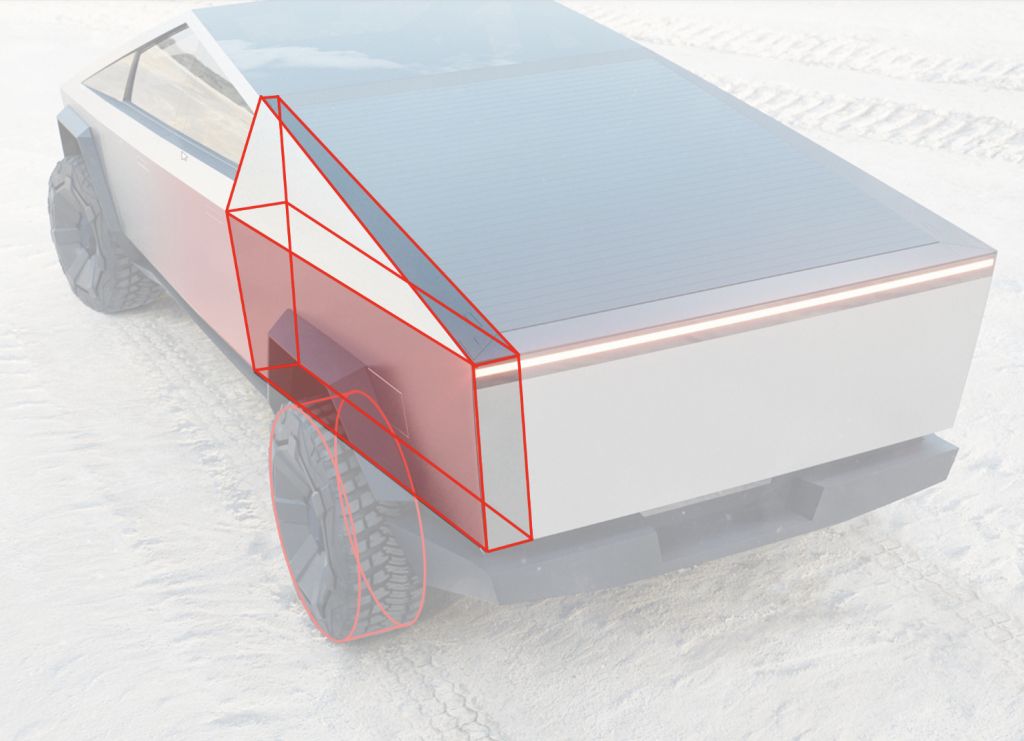 But calm down (and stop eating your kid’s food), for Tesla claims that there will be storage all over the place, including under that bed and in those sail pillars (those are those big flying buttresses that extend from the cab and become the bedsides). From Tesla:

How exactly one would access that storage space, I’m. unsure. But I have no doubt that a Tesla fan will tell me in the comments. -DT].

Sure, the bed has a couple of tie-down posts cut into the corners, but I don’t envy anyone who has to try to jam an under-tension bungee cord end into those sharp triangular holes with their fingers made of sliceable meat. And you’re going to block that narrow slit of a rear window pretty quickly, too. 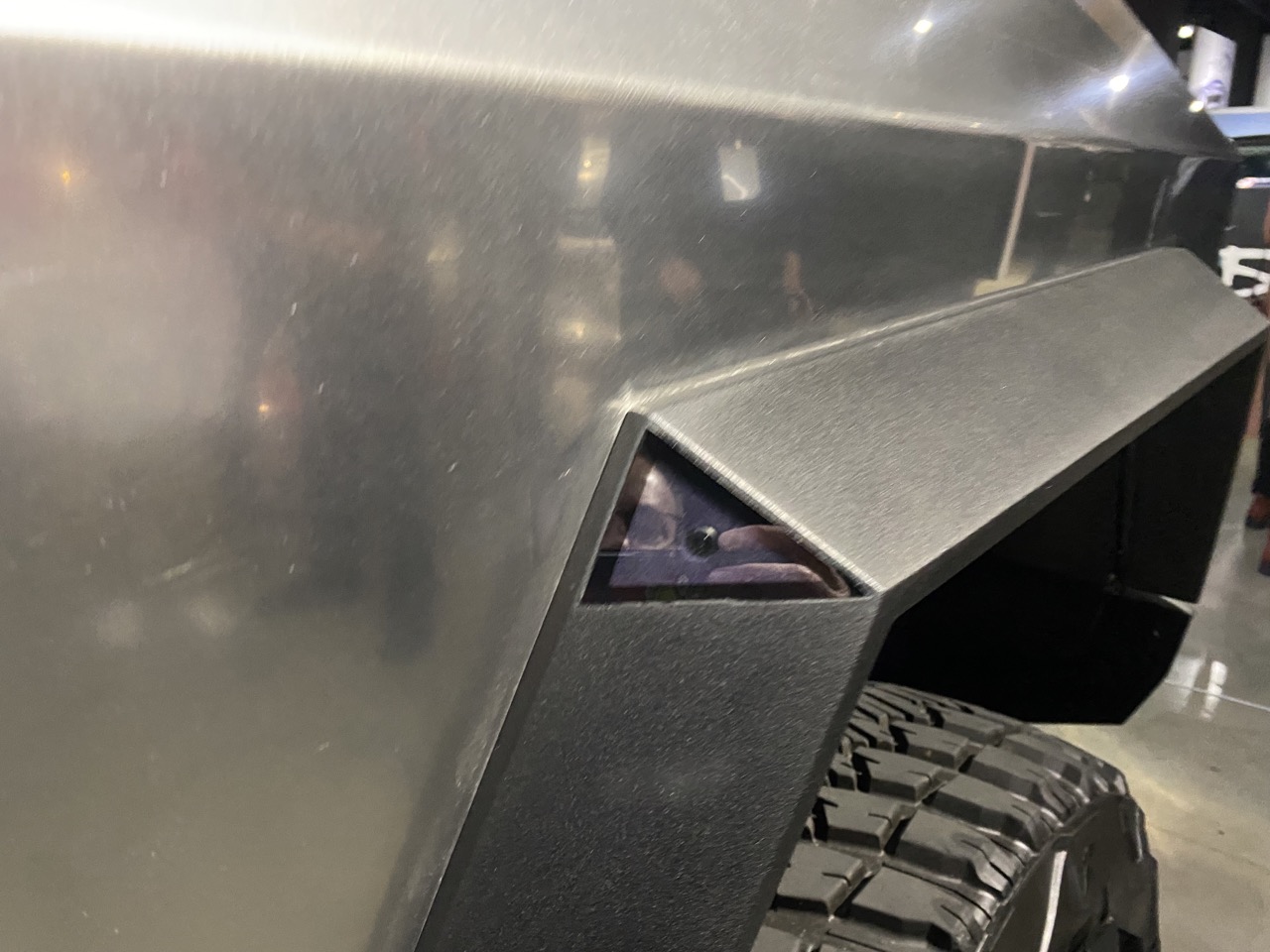 There are cameras inset into the fender flares, possibly on the most vulnerable part of the sides of this already extremely wide vehicle. I mean, they look like cool triangular eyes, so there’s that.

As a design, all just feels so unforgiving, and just uninterested in being an actual, usable, truck. It’s got a very specific look and form that really have nothing to do with utility or practicality. I suppose if we’re honest, that’s probably fine, as most potential buyers are not likely looking to use this as an actual work truck. I get that. But then the whole massive size of this thing just feels even more absurd, and it becomes even more silly, conceptually. [Editor’s note: It’ll be interesting to see how big the production version is. -DT].

Look, maybe the later prototypes and then the production one will solve these issues. Maybe it’ll prove to be a fantastic truck on its own merits. But, if we’re going by what this prototype actually is, then I can’t imagine anyone who actually needed a truck would choose this thing. 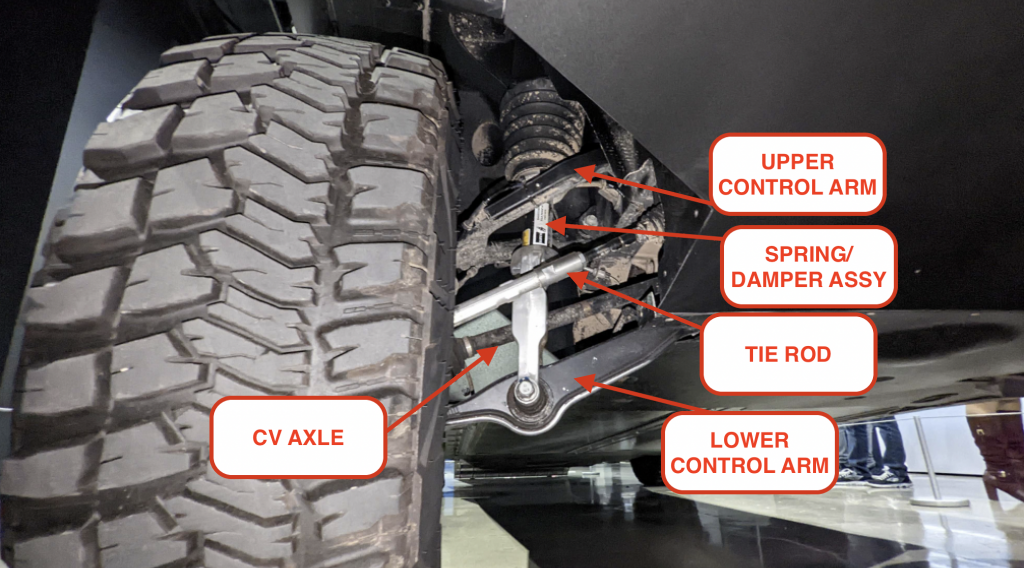 I snapped a few photos of the prototype Cybertruck’s underbody, and though there wasn’t a ton to see, there was some. So let’s check it out. 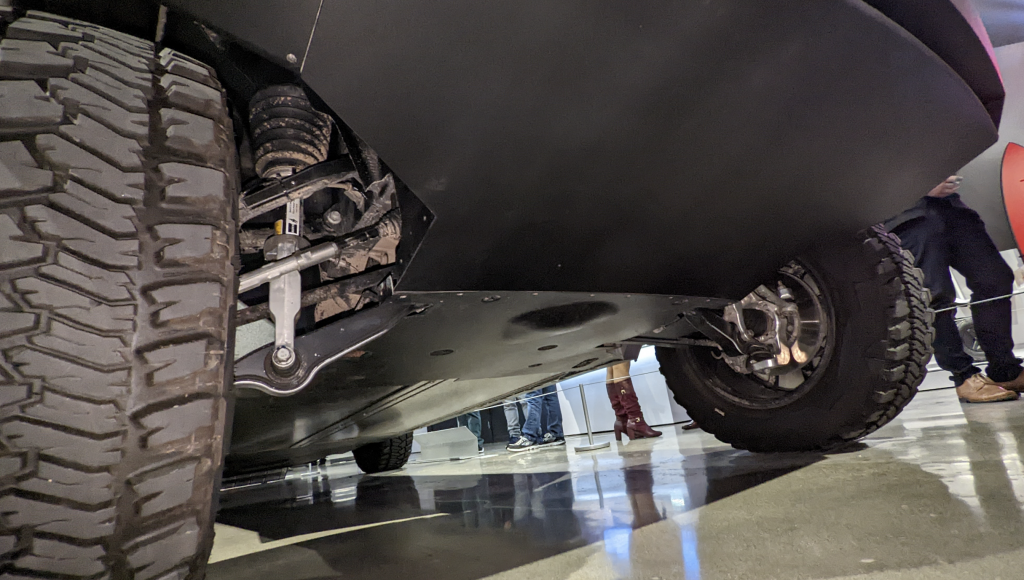 The two photos above shows the front air-sprung double wishbone suspension. You can see the tie rods up front, lower control arms holding the air springs/dampers, upper wishbones at the top, and CV axle there amongst all the suspension and steering bits. The CV axle and all the steering and suspension bits are angled quite sharply, which could cause not only CV joint longevity concerns, but also “jacking” issues with the steering and suspension (basically, drastic changes in geometry when you hit a bump, causing handling issues). But of course, this clearly isn’t the standard ride height of this front suspension; the front end appears to be lifted, possibly because there may not be a full-size battery in this display model (I’m not sure; I am sure that this thing drives, though), and possibly to help the truck squat for the ramp at the rear of the truck (the ramp that allows one to drive an ATV/bicycle/motorcycle/whatever into the bed — you can barely see it in the image above).

Here’s a look at the front suspension from above; you can see the air spring/damper and upper control arm, which appears to be painted cast aluminum if I had to guess: 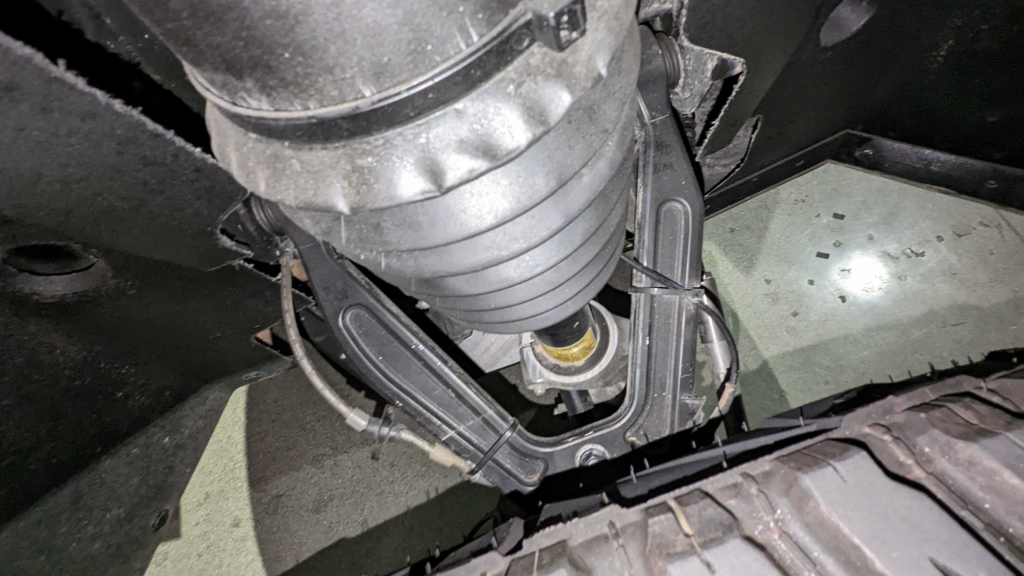 Here’s a look from behind. 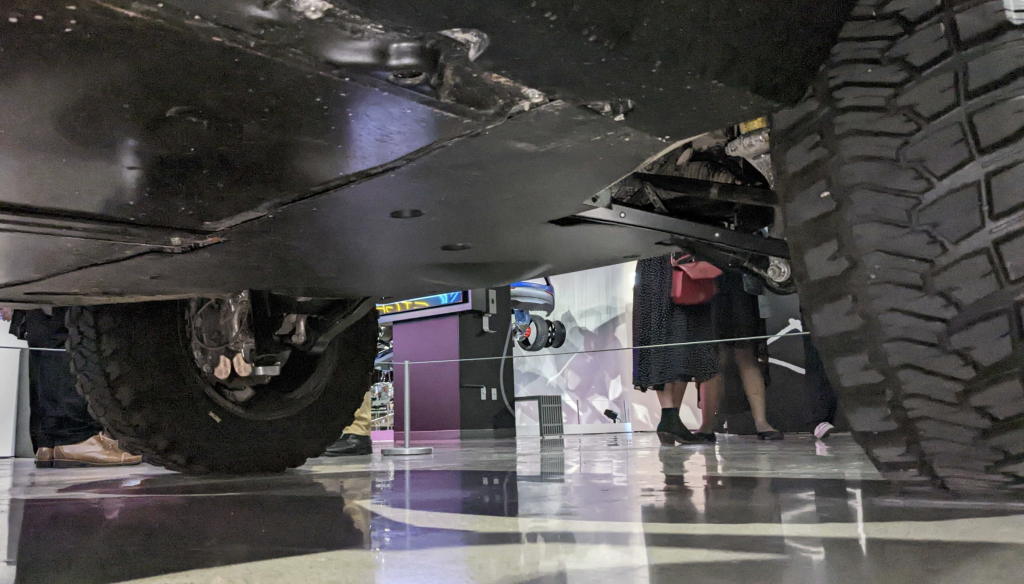 There’s not a ton to see here, but you can view where the knuckle connects to the control arm’s ball joint, and you can see where the spring/damper fasten to the lower arm: 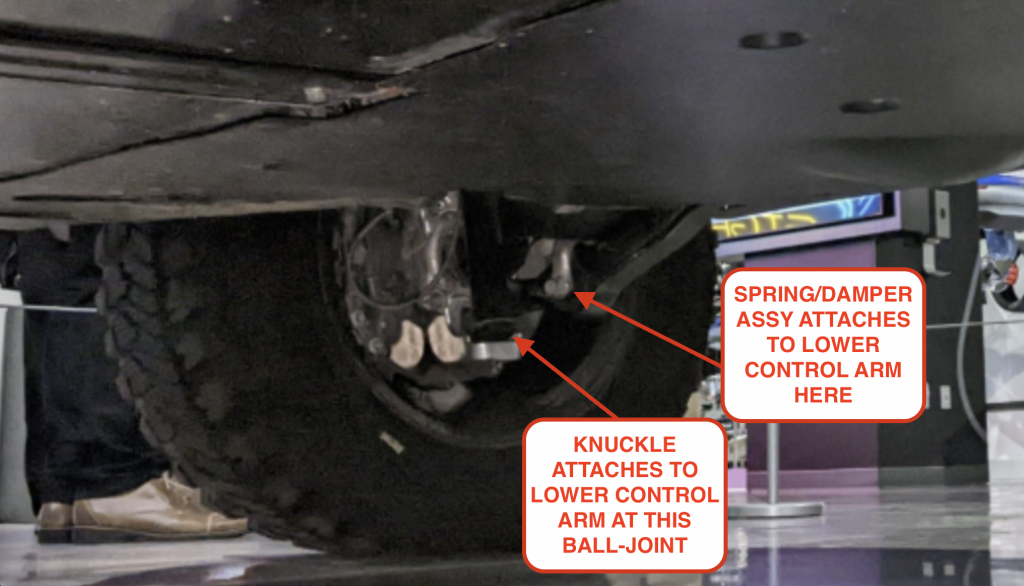 Here’s a close-up look at the wheel shown above, but from the front: 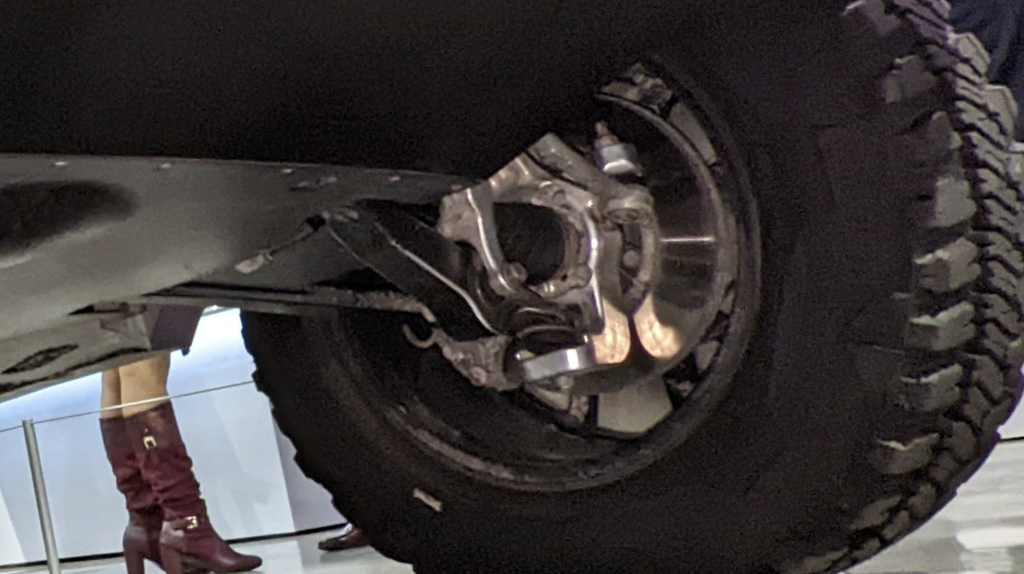 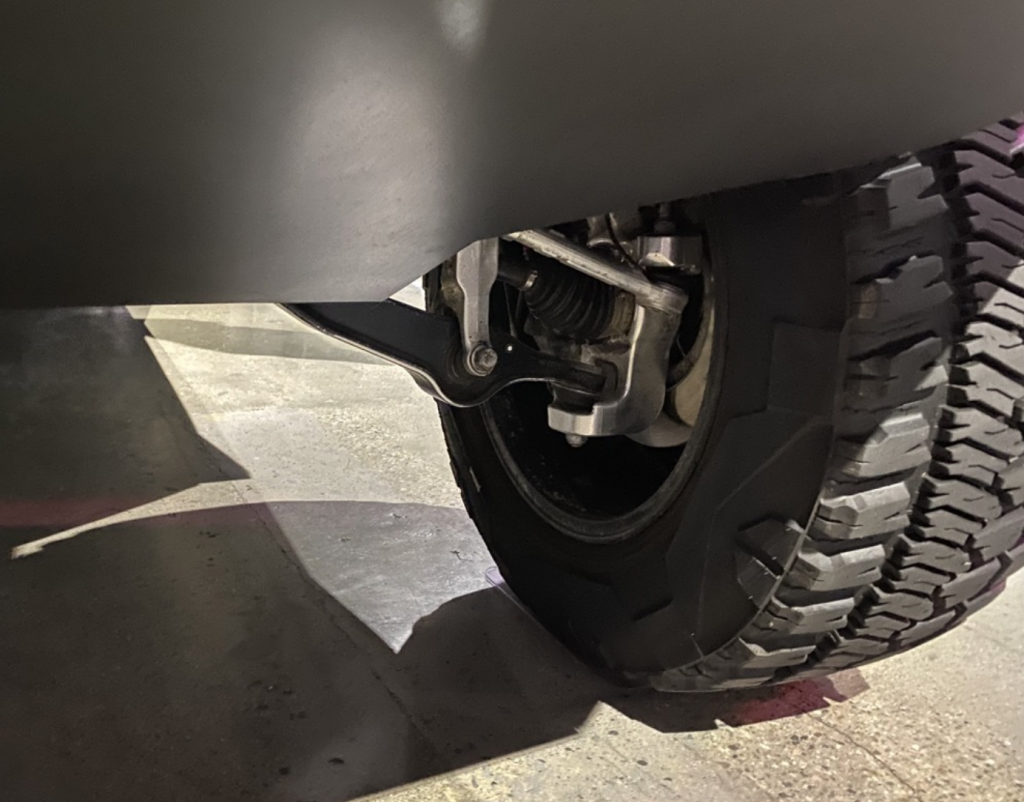 Here’s a look at the air spring, and the upper control arm mounting location: 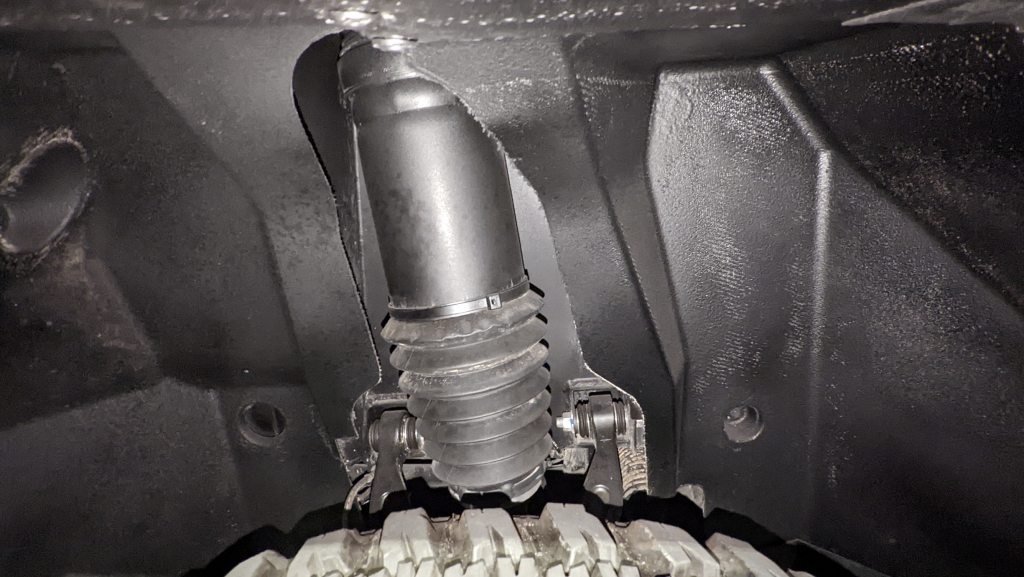 Sliding towards the rear, all I saw was a totally-flat belly, which should do wonders for aerodynamics and — if covered in tough enough material — off-road capability:

It’s hard to see the rear multilink suspension, though what is obvious is that the rear spring/damper leans inward at quite a sharp angle, which severely impacts the suspension’s installation ratio and motion ratio. I won’t pretend to be a suspension expert, but I will say that I rarely see rear suspensions with springs/dampers with such a steep rake (as I understand it, you’d normally want them closer to vertical so that their displacement better matches that of the wheels): 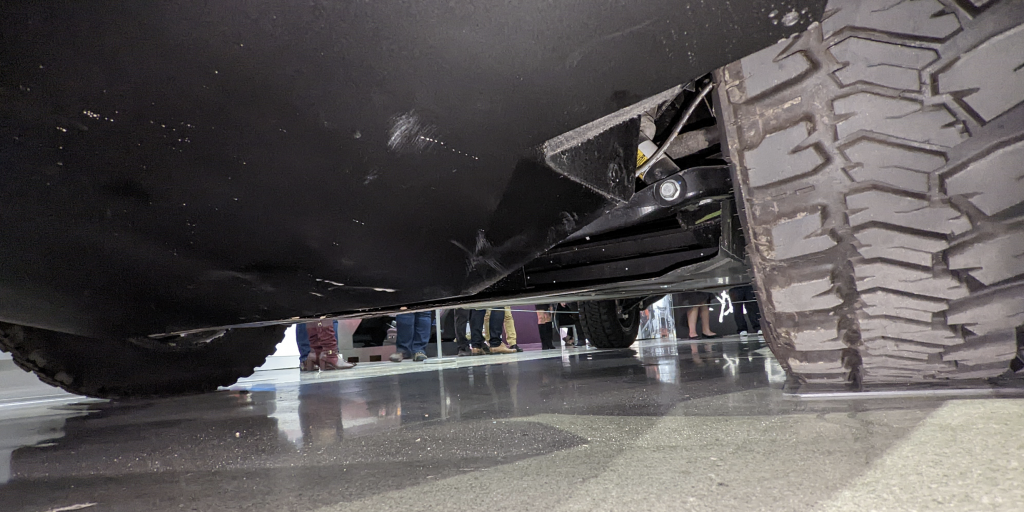 I’ll also point out the wheel covers, because they’re bizarre, and because Jason didn’t show them before: 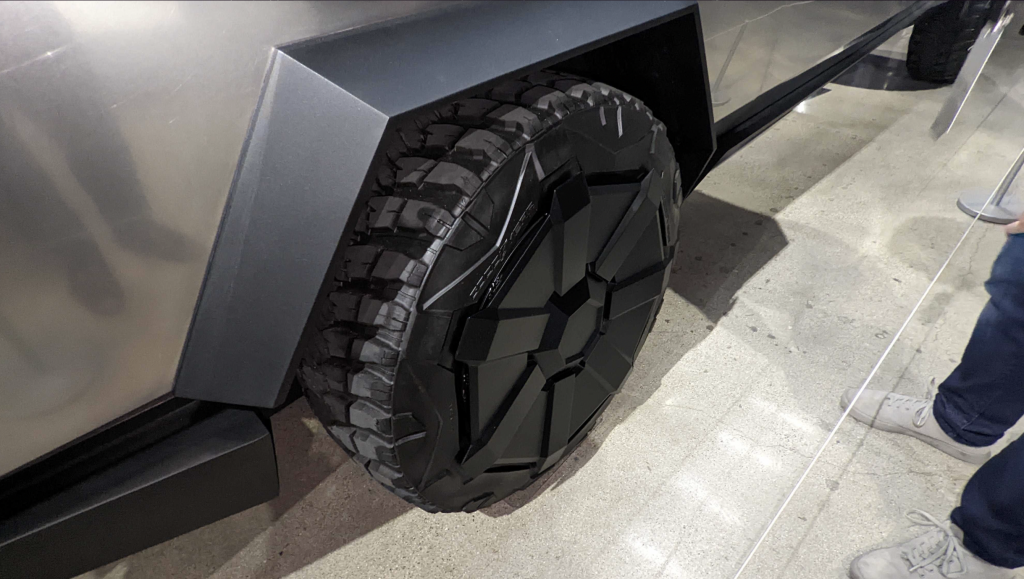 Anyway, this is just the prototype truck, so it’s very likely that quite a lot of what we’ve shown will change before this thing hits the market. Still, it’s cool to see the O.G., especially the infamous steel ball that splintered the truck’s “unbreakable” glass: 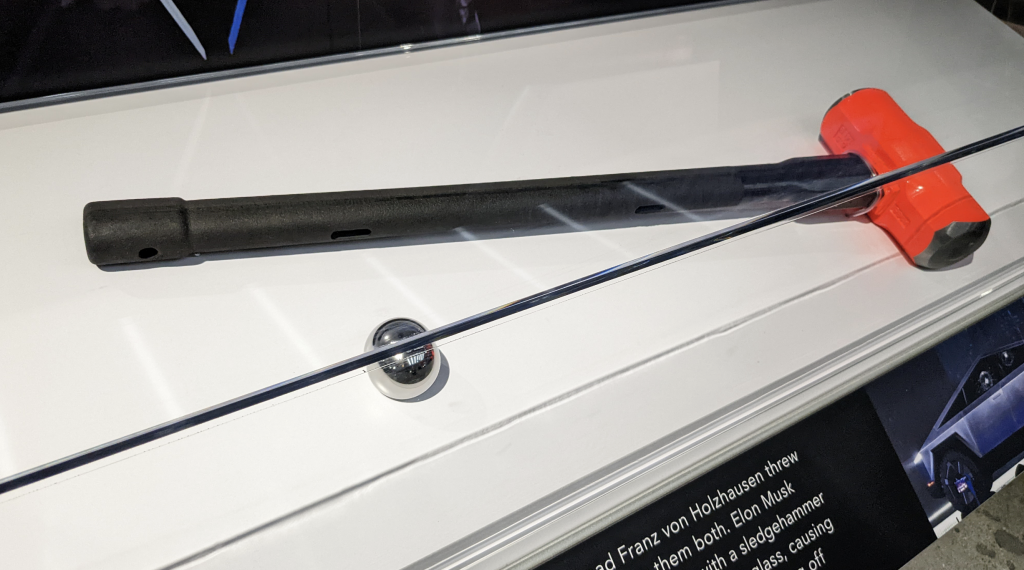 Check out the “INSIDE TESLA: SUPERCHARGING THE ELECTRIC REVOLUTION” exhibit, which is active until October 22 of next year, at the Petersen Automotive Museum.

I'm a co-founder of the Autopian, the site you're on RIGHT NOW! I'm here to talk to you about taillights until you cry and beg me to stop, which I absolutely will not. Sorry. Hug? Also, David's friend.
Read All My Posts »
PrevPreviousThe Charmingly Simple Yet Surprisingly Modern Morgan Plus Four Is Coming To America In 2023
Next11 Books For The Car Enthusiast In Your Life – Autopian Gift GuideNext