Great news: After years away from America’s four-wheeled car market, the quirky three-wheel-car-building British brand Morgan plans on making a return for 2023 with its recently-updated Plus Four roadster that represents a massive leap forward for the brand.

In case you’re not familiar with Morgan, this funny little British car brand was founded by H.F.S. Morgan back in 1910. After a few decades of making quirky three-wheelers, Morgan cooked up a four-wheeled sports car called the 4/4 in 1936.  It used a conventional frame and hand-beaten panels, as was the fashion of the time. While that might not sound particularly remarkable, Morgan stuck with this general style of car for more than eighty years, fenders sitting proud of the body and all (that’s a newer 4/4 below).

Since MG, Triumph, and Austin-Healey packed their sports car bags long ago, Morgan remains one of the last companies still manufacturing classic-style British roadsters. It’s a delightful anachronism of a firm, wonderfully intent on doing things its way and having its own definition of progress.

Currently, Morgan makes three different cars. There’s the Super 3 three-wheeler, the Plus Six high-performance six-cylinder roadster, and this Plus Four, which sits right in the middle of the range. Although previous Morgans featured more streamlined styling, the new Plus Four still looks exactly how you think a Morgan should. Sweeping fenders, a prominent rear-mount spare tire, and wonderfully vintage lighting provide faithful looks for leather-capped cosplay. However, there are subtle signs that the Plus Four, shown below, is something brand new. The proud lower grille and wide track are two key hints as to what lies beneath the body. 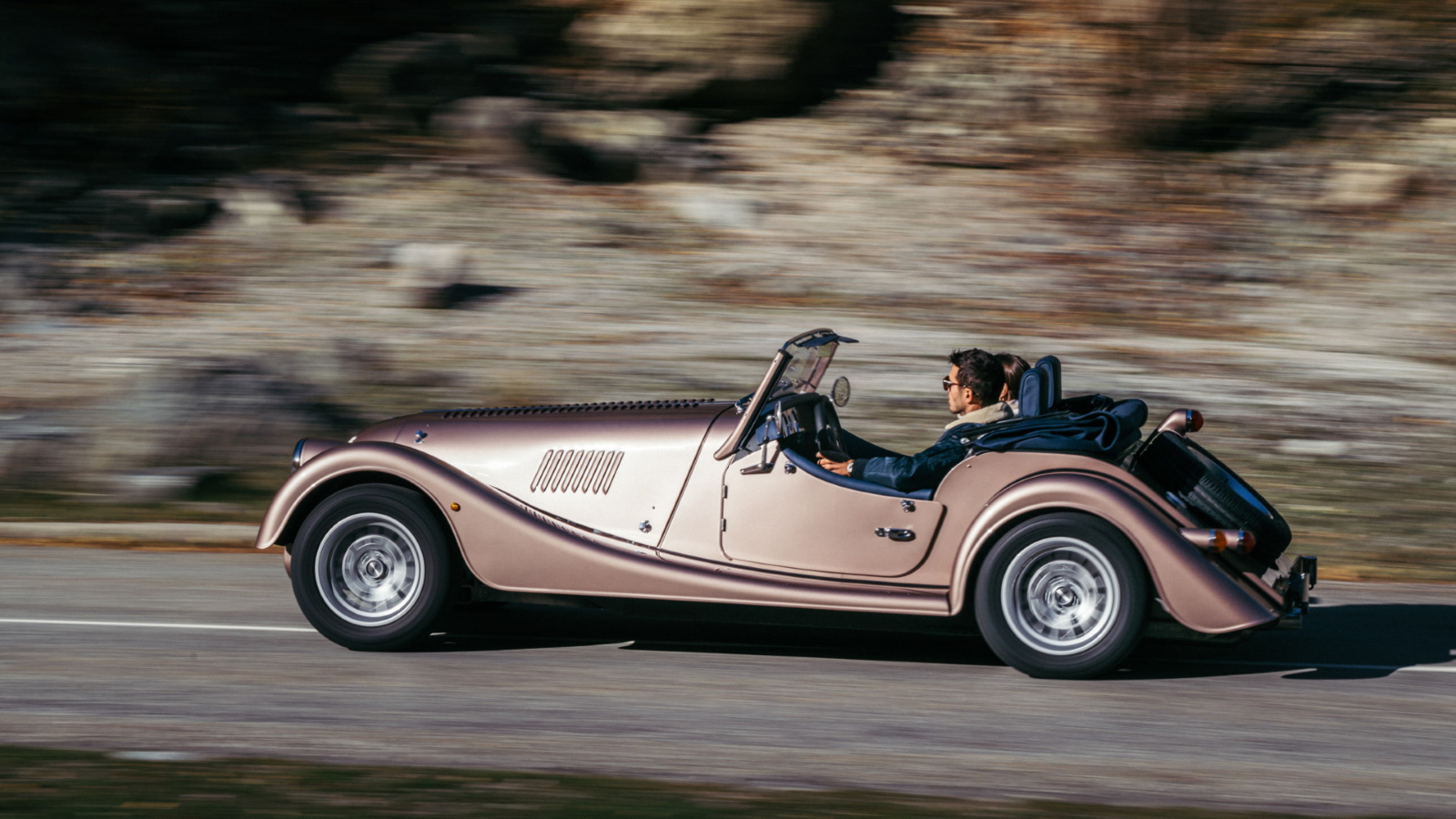 While historic Morgan four-wheelers featured engines from the likes of Ford and British Leyland, the new Plus Four has taken inspiration from the Morgan Aero 8 and gone Bavarian. Under the hood sits BMW’s 255-horsepower B48 four-cylinder engine, a robust and torquey engine good enough for a zero-to-62 mph time of 4.8 seconds, a properly quick run that’s sure to surprise a few four-cylinder Supra owners. Coincidentally, that’s the same zero-to-62 time quoted for the old BMW N62B44 V8-powered Aero 8. Power goes to the rear wheels through ZF’s segment-defining eight-speed automatic gearbox, although a six-speed manual will join the Plus Four’s star-spangled market lineup at a later date.

If the presence of a ZF 8HP automatic gearbox isn’t enough of a shock to Morgan traditionalists, the new interior is sure to draw opinions. Instead of featuring all the luxury of a bus shelter, the Plus Four’s new interior puts a new focus on comfort and equipment. Twin airbags bolster confidence, while the dash face is now aluminum rather than wood. Other lovely updates include beautifully slim interior door releases, a funky linear wood treatment on the center console, a digital driver’s display to streamline idiot lights, and a glovebox.

Granted, if a glovebox, available cup holders, air conditioning, and a digital display in front of the driver help propel the Plus Four into the 21st century, Morgan’s new platform takes it all the way. No longer a Biggles-era ladder-framed curiosity, Morgan’s entry-level four-wheeler sports an aluminum chassis, although ash is still used to frame the coachwork. The chassis itself weighs just 213.8 pounds and incorporates floorpans, the central tunnel, and a mounting panel for the spare tire, things that weren’t part of the old ladder frame.

Altogether, the Plus Four is a unique blend of old and new: A Lotus-esque aluminum chassis with old-school wood body framing, a quick automatic gearbox with proper vintage styling, handcrafted production techniques with multi-mode stability control. It promises vintage motoring without the compromises and modern performance without modern conformity. Sure, you could buy a GR Supra, a BMW M2, or a very fast Camaro instead, but Morgans usually have that affable quaintness that makes them hard to dislike. In an age of synthesized engine noise and artificial pops and bangs, isn’t it nice to see something unashamedly real? 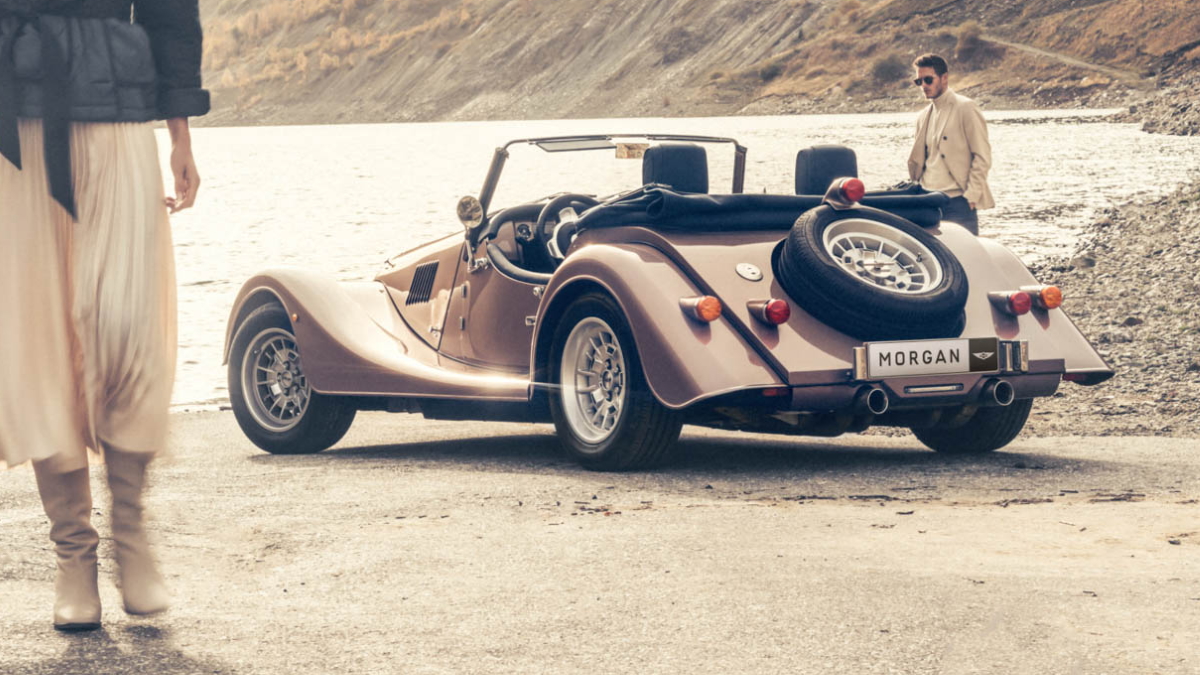 Expect the Plus Four to arrive in America next year, with a manual variant coming a few months later. Don’t expect this hand-built wonder to be cheap, although don’t expect it to be complete unobtanium either. Recent UK pricing for the updated 2023 model suggests a price of £58,495.67 excluding VAT, or just under $69,000. In the realm of specially-crafted small-batch vehicles, that doesn’t seem terribly crazy.

All photos courtesy of Morgan

Thomas is a Nu Rave-blaring, heel-toe downshifting, maple syrup-swilling, chassis-geeking, junkyard parts-hauling, floppy-haired scenester who's been writing about cars since college. His current ride is a 2006 BMW 325i with the six-speed manual gearbox. Instagram: @thomas.hundal Twitter: @thomashundal
Read All My Posts »
PrevPreviousEuro Sedans For The Brave: 1991 Alfa Romeo 164 vs 1980 Rover 3500
NextI Saw The Prototype Tesla Cybertruck Up-Close. Here’s What I ThoughtNext