Here it is, the moment I’ve been waiting for. The last all-combustion BMW M-car ever. The new M2. As it’s last call for pure combustion performance cars, BMW’s chugged an original-formula Four Loko and gone all-out with this thing. It genuinely seems to feature a lot more of everything than the old model. Well, a lot more of almost everything. 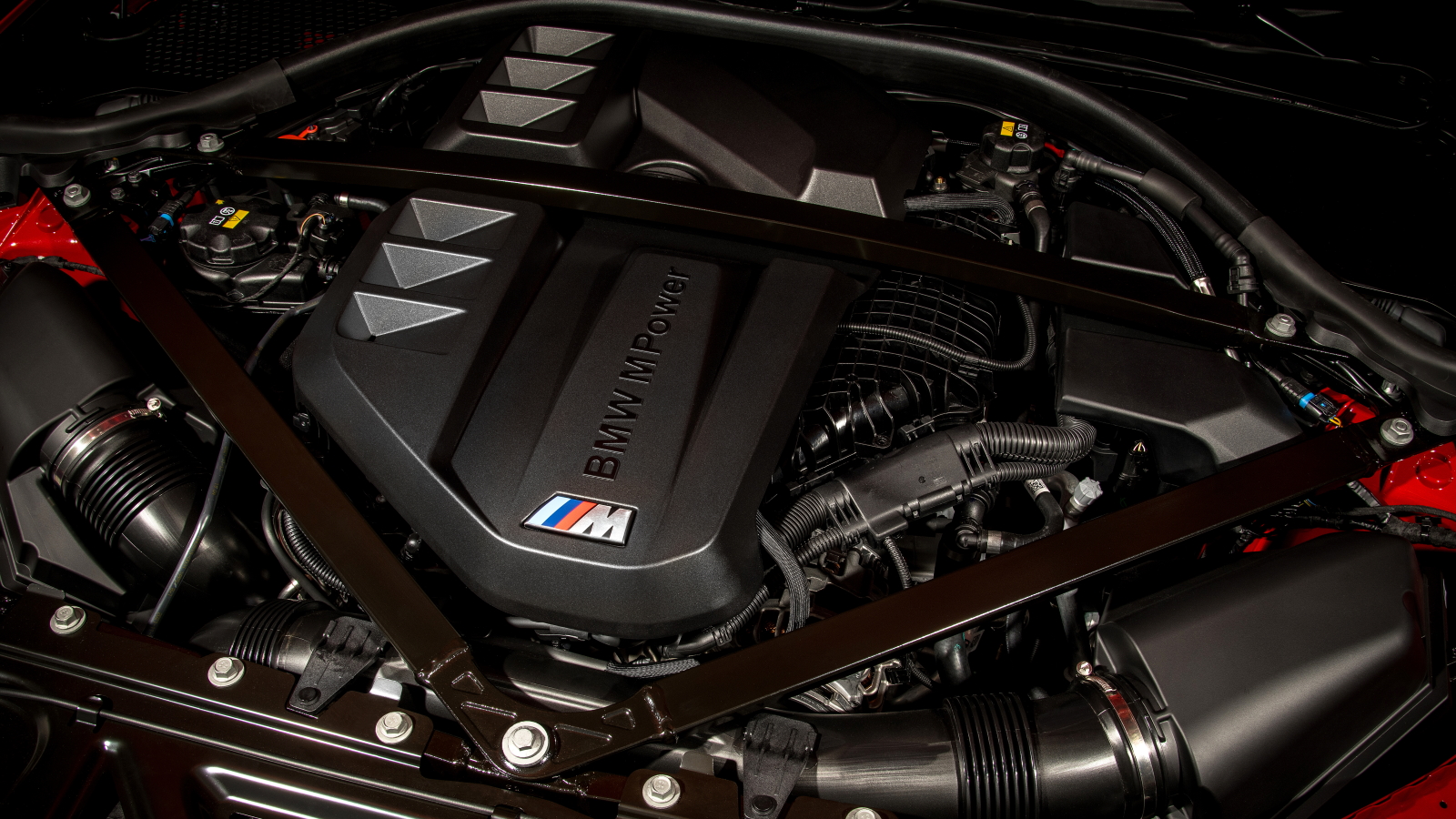 Let’s start with power. The M2 cranks out 453 horsepower in U.S.-spec from BMW’s S58 twin-turbocharged three-liter inline-six. That’s more than the old special edition M2 CS. Peak power hits at 6,250 rpm while redline doesn’t happen until 7,200 rpm, properly good numbers. Even better, a six-speed manual gearbox is on the options list in true M-car tradition, with defeatable automated rev-matching. In theory, it should be the same six-speed manual gearbox as on the M3, which means it should be quite good. Job well done, I reckon.

In the words of the late, great Billy Mays, “But wait, there’s more!” Power is worthless without traction, so BMW’s pulled a rabbit or two out of its hat to keep things planted. The rear differential is an electronically-variable limited-slip unit, while the rear tires come in at a strong 285/30ZR20. The result is zero-to-sixty mph (0-100 km/h) in 4.1 seconds with the manual gearbox and zero-to-124 mph (0-200 km/h) in 14.3 seconds. Tick the box for the M Driver’s Package and you’ll be on your way to a top speed of 177 miles per hour. 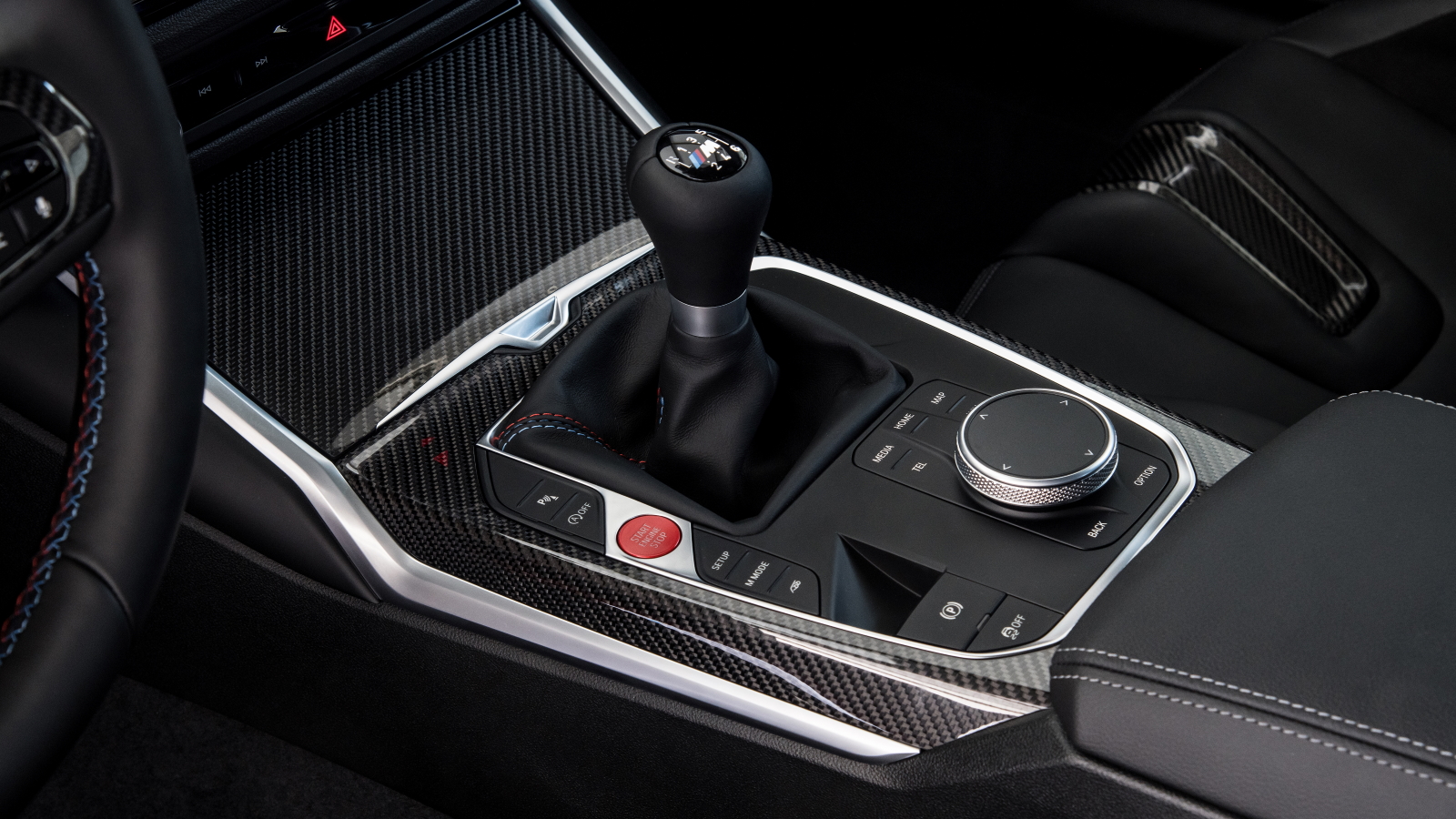 Wait a second. That means this M-Division bruiser might be slower from zero-to-sixty than an M240i. That sounds like a bummer until you realize that if outright numbers aren’t being chased, driver experience likely is. The front tire size is plausible evidence of this, clocking in at 275/35R19, just 10 mm narrower than the rears. A greater stagger usually makes a car less eager to rotate, so forgive me for raising an eyebrow at these tire sizes.

Speaking of handling, the rear subframe is rigidly bolted to the body of the new M2, while both the front and rear suspension adopt unique geometry. Chuck in adaptive dampers and ten stages of traction control, and this new baby M-car should be a hoot and a half. When it comes to slowing things down, BMW’s relying on six-piston front brake calipers and single-piston units out back. Those big brakes are needed due to the M2’s weight, although how much it actually weighs gets a bit murky. BMW USA quotes a figure of 3,814 pounds for the manual car, or 1,730 kg. However, BMW Group quotes an EU curb weight of 1,775 kg including a 75 kg load and 90 percent of a tank of fuel. I wouldn’t be surprised if the lightest specification of M2 clocks in at just under 3,800 pounds. 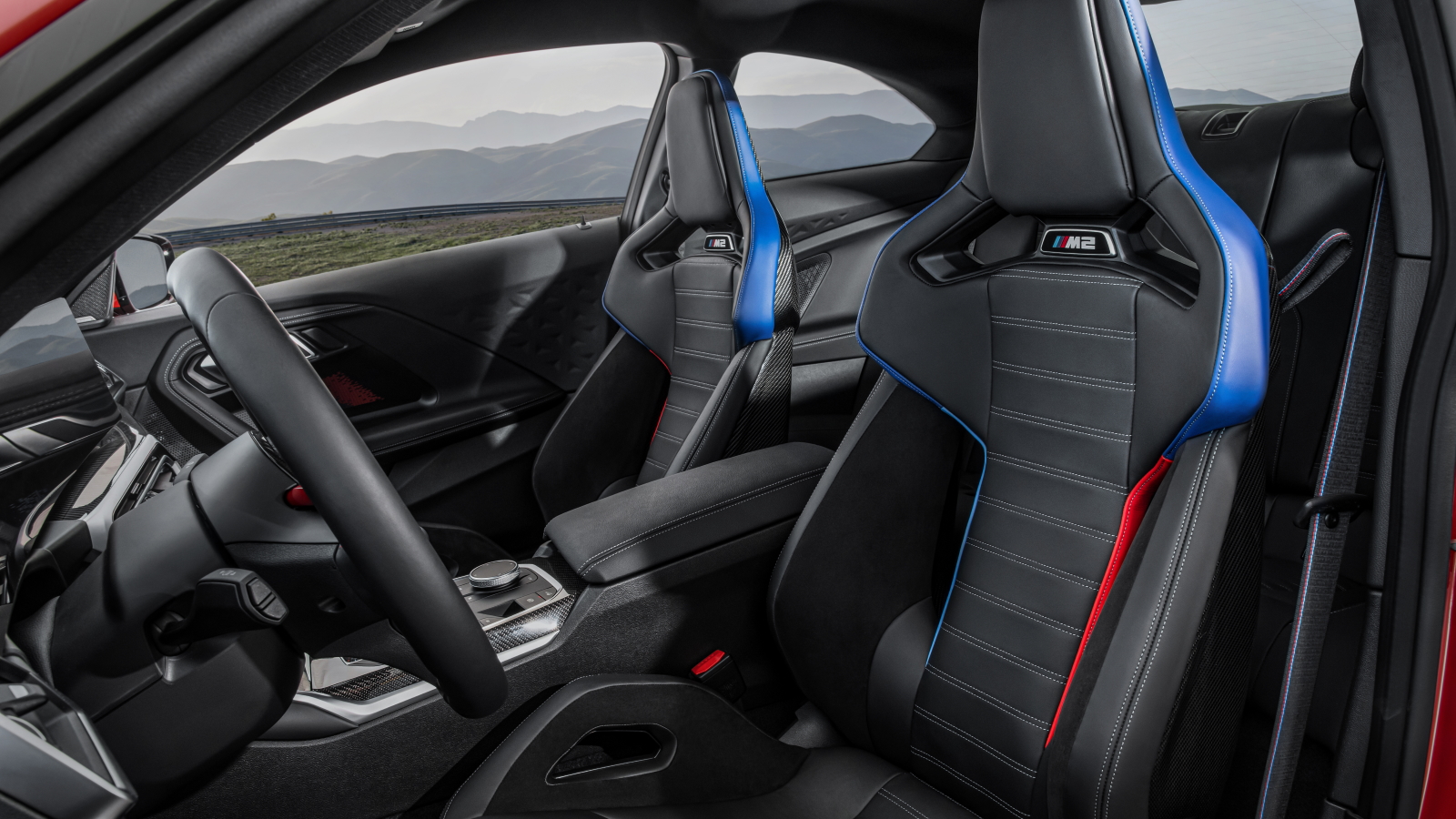 See, standard curb weight means standard equipment, and there are some neat lightweight options available for the new M2. Carbon fiber bucket seats are said to shed 24 pounds over the stock units, while an optional carbon fiber roof should reduce weight even further and comes bundled with the bucket seats in a package. Speaking of interior bits, the M2 also gets iDrive 8, although with three pedals to enjoy, who really cares about infotainment? 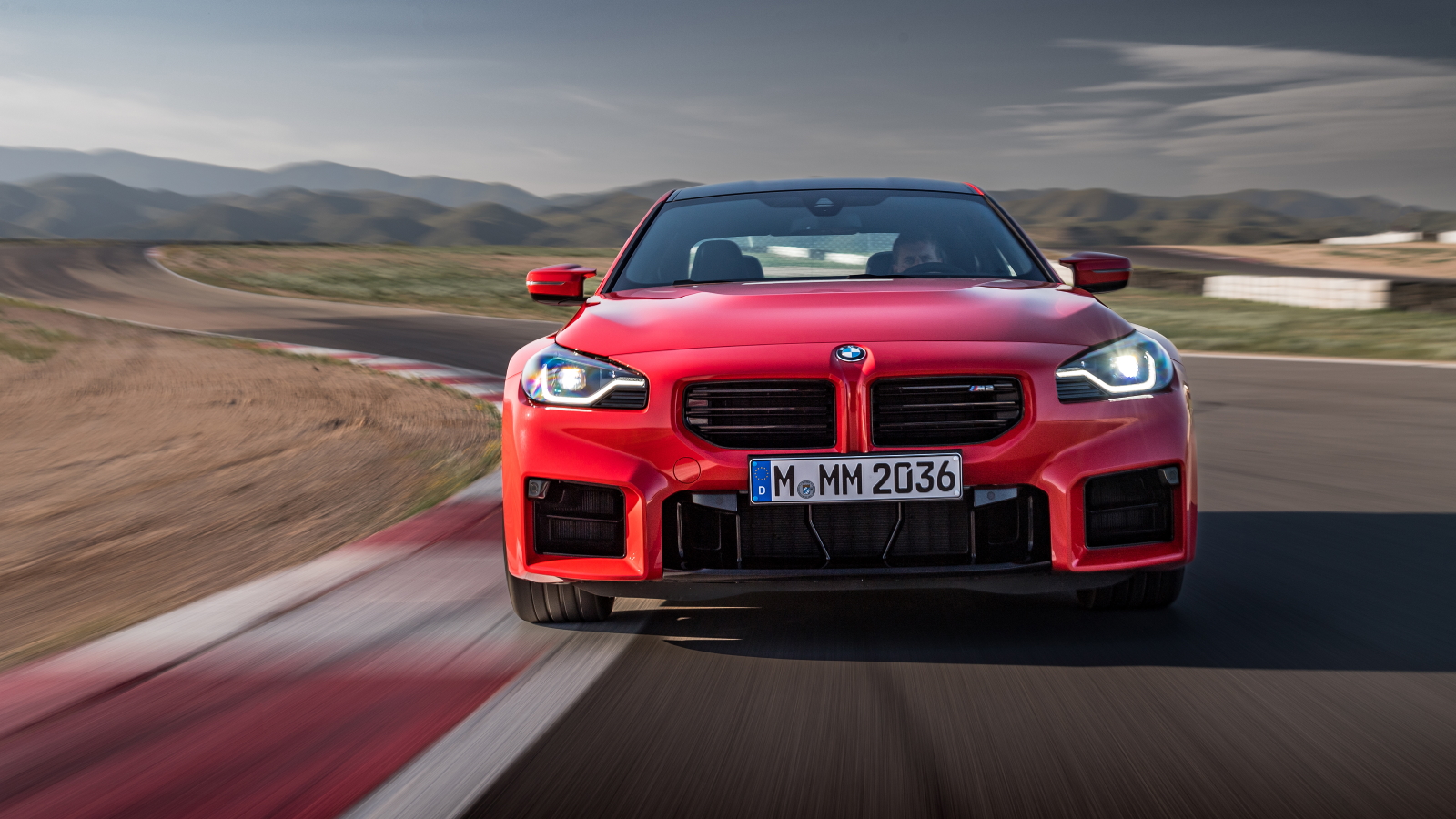 On the outside, the M2 is a bit of a mixed bag. Flared arches and bumpers give it a bulldog stance, while square bumper air intakes evoke shades of E36 M3. Thankfully, BMW’s stuck with small kidney grilles on this one, so it’s much less hideous than an M3 from the front. I’ll call that a win, along with the body-color side skirts. Out back, things get a bit weaker. The rear diffuser-like element isn’t quite as catastrophically sunken as it looked in leaked photos, but it isn’t exactly proud. What’s more, the overall design seems a bit messy. 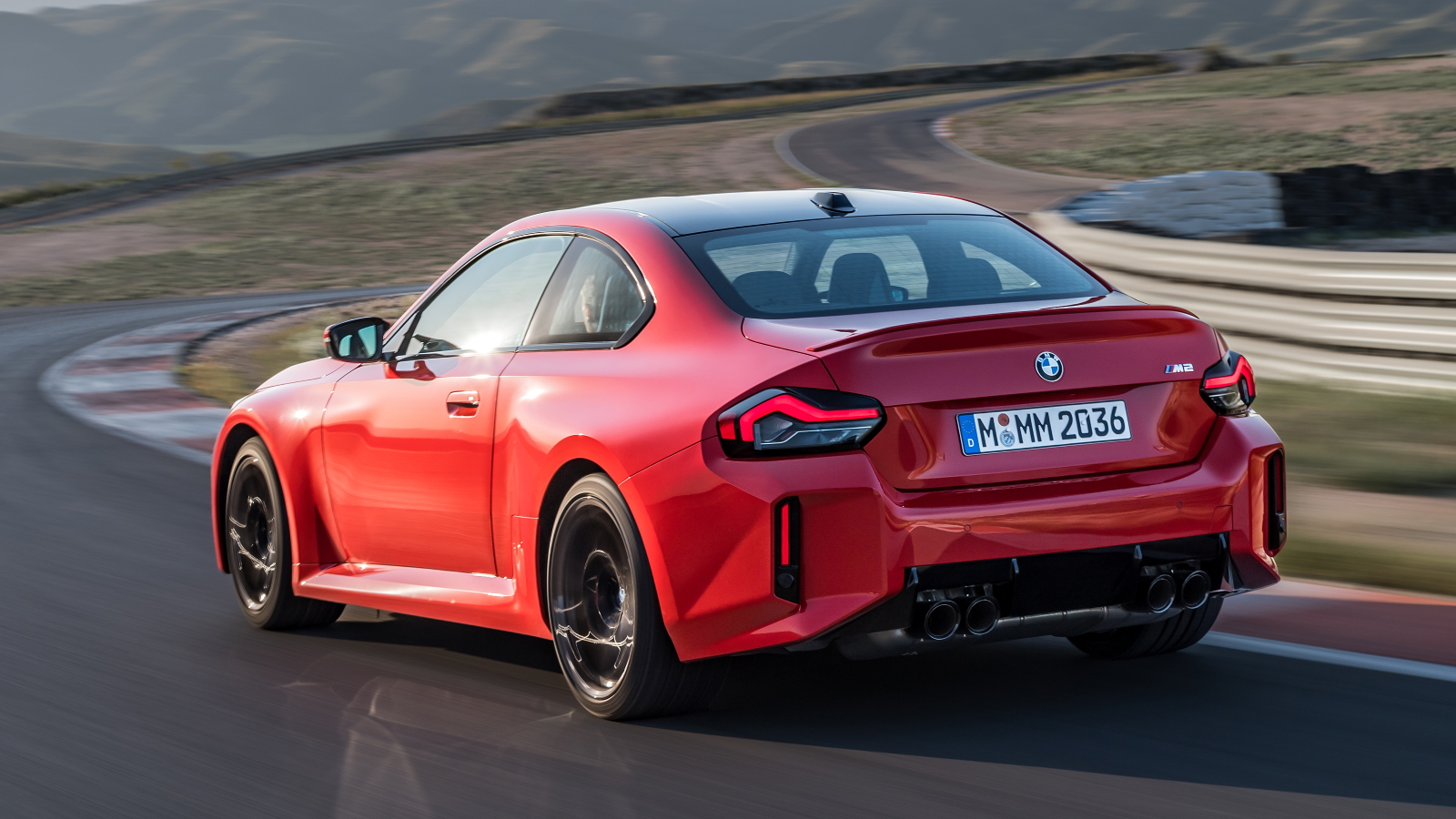 However, think of the M2 less as slightly frumpy and more as purposeful. Those massive front bumper inlets cram air through heat exchangers. The C-pillars have been stiffened, as have the sills, as has the luggage compartment. Form follows function here, and function seems absolutely immense. Speaking of form following function, entry-level performance cars often see small color palettes, and the M2 is no exception. You have the choice of Alpine White, Black Sapphire Metallic, and Brooklyn Grey if you live in black-and-white, or a rather pale Zandvoort Blue and the pictured Toronto Red if you have a soul. Toronto Red it is, then. 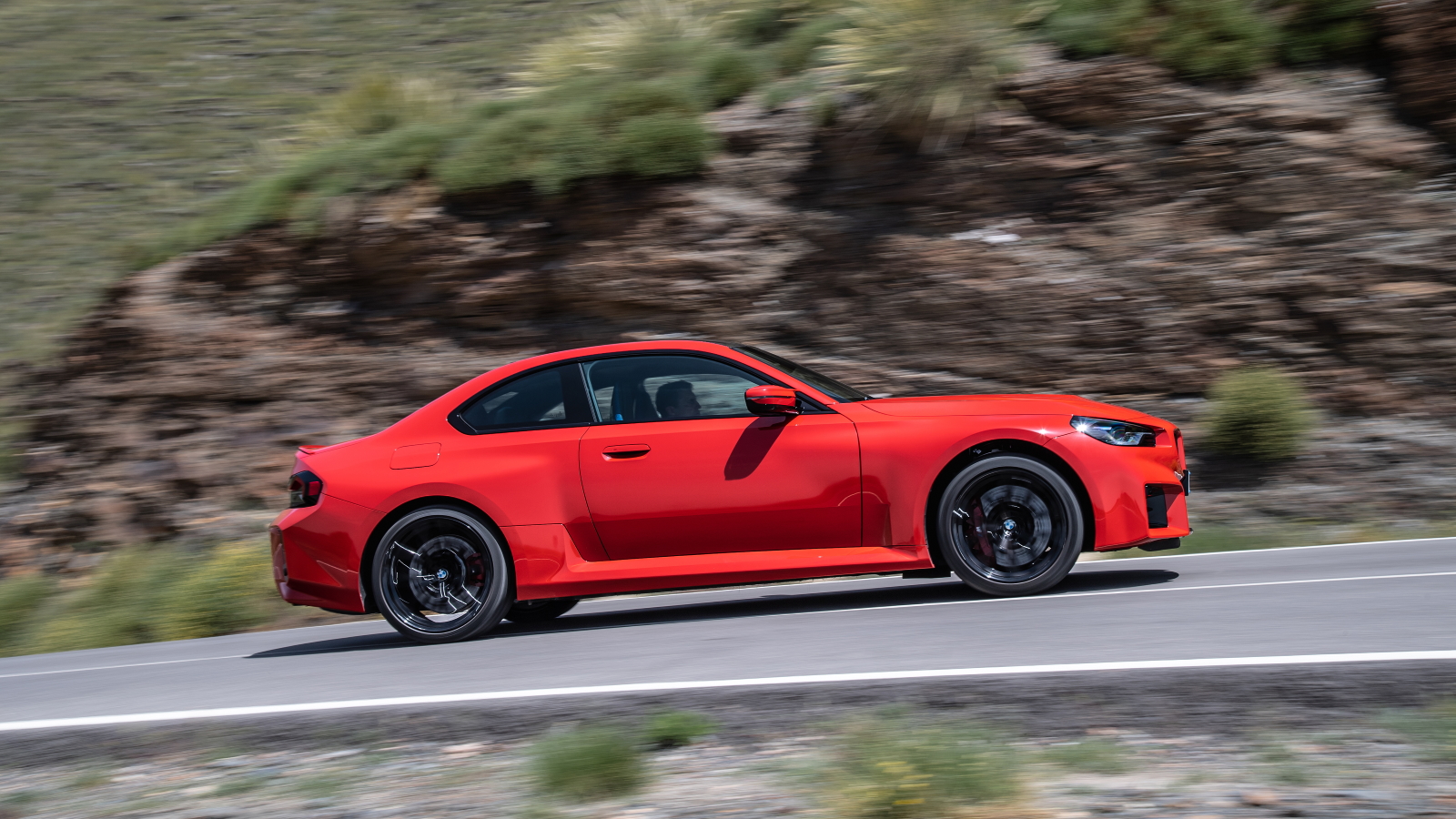 Perhaps the best thing about this new M2 is that it’s affordable. No, really. Pricing starts at $63,195 including a $995 freight charge, which means it’s actually cheaper than a Ford Mustang Mach 1 Premium with the handling pack. Considering the old car started at $59,895 in 2020, a $3,300 price hike seems like a bit of a deal. Expect deliveries to start in the second quarter of 2023 and since the new M2 will be made in Mexico, delivery should be fairly quick. I’ll have to order one, won’t I?

All photos courtesy of BMW

Thomas is a Nu Rave-blaring, heel-toe downshifting, maple syrup-swilling, chassis-geeking, junkyard parts-hauling, floppy-haired scenester who's been writing about cars since college. His current ride is a 2006 BMW 325i with the six-speed manual gearbox. Instagram: @thomas.hundal Twitter: @thomashundal
Read All My Posts »
PrevPreviousMan Conducts Manual ‘Cylinder Deactivation’ Experiment By Strategically Removing Valvetrain. Here’s How His Saturn Drives On Just One Cylinder
NextThe Unbearable Lightness Of Being A Skoda Driver: Cold StartNext