Remember that rig the Insurance Institute for Highway Safety built to crash test big, beefy EV trucks and SUVs that weigh as much as a small apartment complex? Well, it put in the work hauling a 7,148-pound Rivian R1T down the runway toward a set of barriers in the name of safety. The results are now in for Silicon Valley’s electric truck of the moment. And in the words of Borat, “Great success!”

Yes, the Rivian R1T smashed it, earning the Institute’s highest rating of Top Safety Pick+, an impressive feat considering that the new Toyota Tundra is the only other truck to earn such a rating. But why is that? To find out, we’ll have to look at how this rating is assigned.

But first, a little explainer on what makes the R1T so different from most other pickup trucks. For starters, there’s the method of construction. If you crawl underneath a Ford F-150, a Chevrolet Silverado 1500, or a Ram 1500, you’ll see a body and a truck bed bolted separately to a ladder frame using a bunch of rubber isolators to take up slack and keep things quiet.

By contrast, the R1T starts with a welded perimeter frame without central crossmembers, then bolts it directly to a single body that incorporates a cab and bed without any isolators between body and frame. You can get a great look at Rivian’s architecture in this video by Munro Live.

In addition, the Rivian R1T is a whole lot heavier than a full-size half-ton truck, clocking in at almost 800 pounds heavier than a Ram TRX when equipped with quad motors. Nobody’s really made a truck like this before, which makes crash testing it all the more intriguing.

Back to what Top Safety Pick+ means. For starters, there’s the driver’s side moderate overlap front impact test, IIHS’ bread and butter. Without it, IIHS likely wouldn’t have built such a reputation for passive safety testing, as the moderate overlap test forced carmakers to change how their products were made. (Remember, the IIHS is an independent nonprofit organization funded by insurance companies; its tests are different from the “official” star-based ratings from the National Highway Traffic Safety Administration.)

After all, the previous industry standard of a full-width barrier impact isn’t the most realistic of tests and allows crash forces to be spread out across both front chassis rails. There’s just one problem with the moderate overlap test: Because the test has been around so long, virtually everything does well on it. The Ford F-150, Chevrolet Silverado 1500, Ram 1500 and Toyota Tundra all earn the top rating of Good in this test. So, nothing here to differentiate the R1T from the rest of the pack. Still, the Rivian’s stiff body structure is quite fascinating to watch bounce off of the barrier.

Alright, so what about the tough one, the small-overlap barrier test? This one involves only a quarter of a vehicle’s width contacting the barrier, putting immense pressure on vehicles’ A-pillars, footwell structures, and sills. Known for folding many cars from the last decade into cubes, surely this will separate the safe from the sketchy, right?

While the Rivian R1T showed some deformation through ripples in the roof, the front wheel broke away from the vehicle and a reasonably sound safety cage earned the truck the top mark of good. 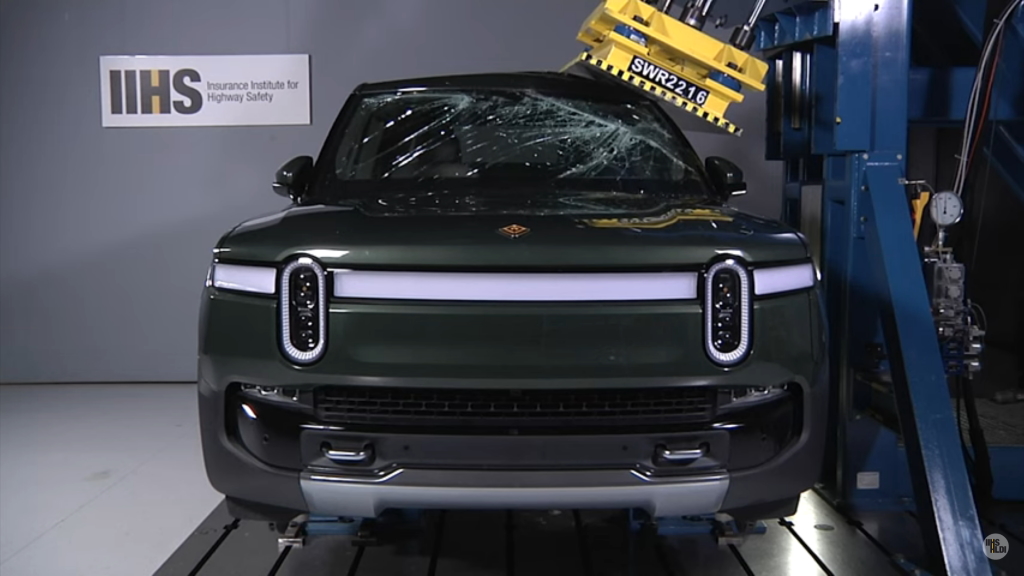 Perhaps we’ll find answers in side-impact testing. Or not, as both the Ram and the Ford also do well here. It’s the same deal for the roof crush test pictured above. The same goes for head restraint testing where a seat is mounted to a rig, as well as testing of available automatic emergency braking testing against cars and pedestrians.

So what the hell does the plus symbol actually denote? In fact, the only thing that differentiates a Top Safety Pick+ vehicle from a regular Top Safety Pick vehicle is decent headlights being standard, rather than optional. Good headlights are important, but that plus is doing some very heavy lifting here.

So, if you’re shopping for a new truck, take solace in knowing that the Ram 1500, Ford F-150, Toyota Tundra, and Rivian R1T all pack similar levels of passive safety and similarly-advanced automatic emergency braking according to IIHS testing. Get the right spec of the F-150 and Ram 1500, and you’ll have good headlights too. Still, kudos to Rivian for making a safe truck, especially considering it’s the marque’s first shot at a vehicle.

Watch IIHS Slam An Old Ford F-150 Overloaded To 9,500 Pounds Into A Barrier In The Name Of EV Crash Testing

Thomas is a Nu Rave-blaring, heel-toe downshifting, maple syrup-swilling, chassis-geeking, junkyard parts-hauling, floppy-haired scenester who's been writing about cars since college. His current ride is a 2006 BMW 325i with the six-speed manual gearbox. Instagram: @thomas.hundal Twitter: @thomashundal
Read All My Posts »
PrevPreviousWhy Electric School Buses Are The Perfect Application Of Current EV Technology
NextHow To Apply Space Rock Classifications To A Busted Chevy Malibu: COTDNext