Today I stopped by Munro & Associates to talk about vehicle cost reduction (sounds boring, but you just wait). And on my way home I saw the new Amazon “EDV” delivery trucks “powered by Rivian.” So I stopped and took a close look. Here’s what I saw.

Really, I stopped because I knew my coworker Jason would have a lot to say about the vehicle’s lighting situation. The rear taillight, in particular, is truly special, as Jason makes clear in his analysis below. As for what I have to say about this machine? Well, naturally I slid underneath to look at the hardware.

A Brief Look Underneath The Amazon EDV ‘Powered By Rivian’ 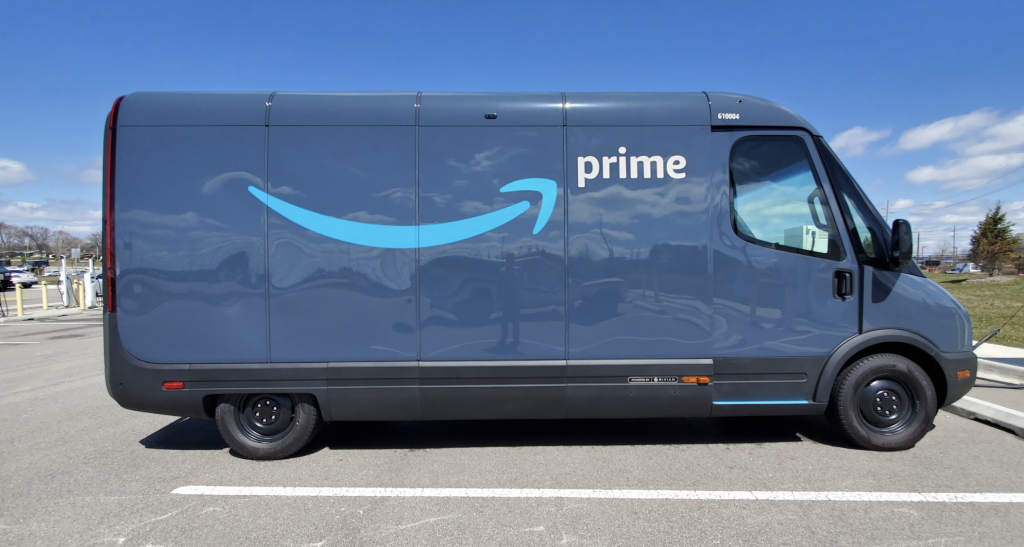 Before I get into the hardware, let’s first identify what we’re looking at. Amazon’s delivery vans come as three models, named after their storage capacity in cubic feet (rounded up to the nearest 100 apparently): EDV 500, EDV 700, EDV 900. If you look closely as the image below, you’ll see that the length between the models changes by one rectangular “section.” Behind the rear doors, the EDV 500 has three sections, the EDV 900 has five, and the van above — the EDV 700 — has four. I’m not sure that the EDV 500 or EDV 900 are even out yet, so it’s no surprise that the one I saw had those four rear “sections.”

Now that we know what we’re looking at, let’s check out what’s going on underneath.

Just under the rear bumper, looking forward, you’ll see a steel skateboard/frame with a steel body mounted up top. The rear suspension is a coil-sprung torsion beam design located laterally by a track bar (a cheap but robust design, you’ll find something like this under the back end of an entry-level front-wheel drive car like a Hyundai Accent). I did notice that the track bar mount on the frame looks to have another stamped steel piece bolted to it — I’m wondering if this acts as a reinforcement for the bracket welded to the frame? (I.e. to make sure the track bar bracket welds don’t fail under high loads?). 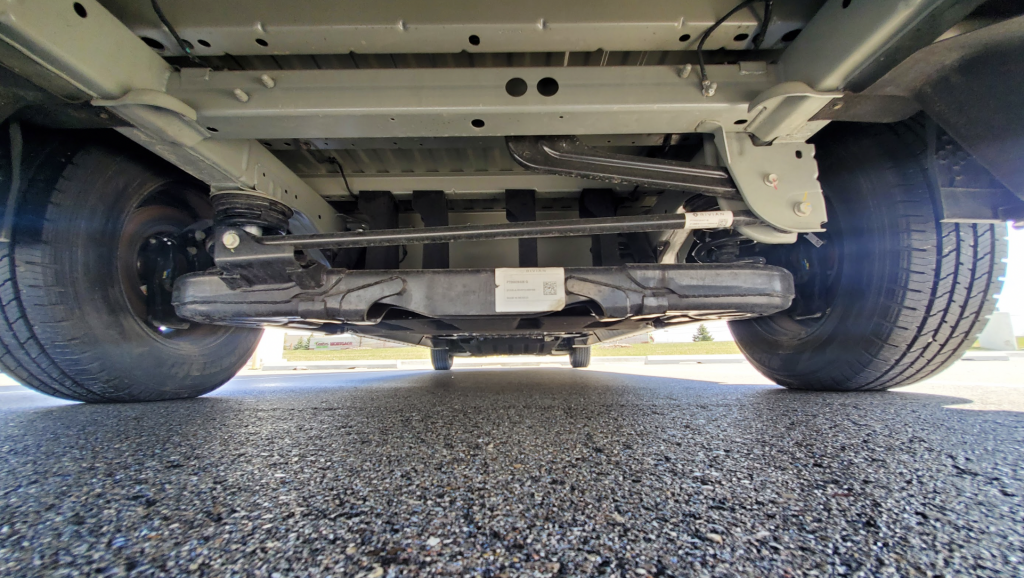 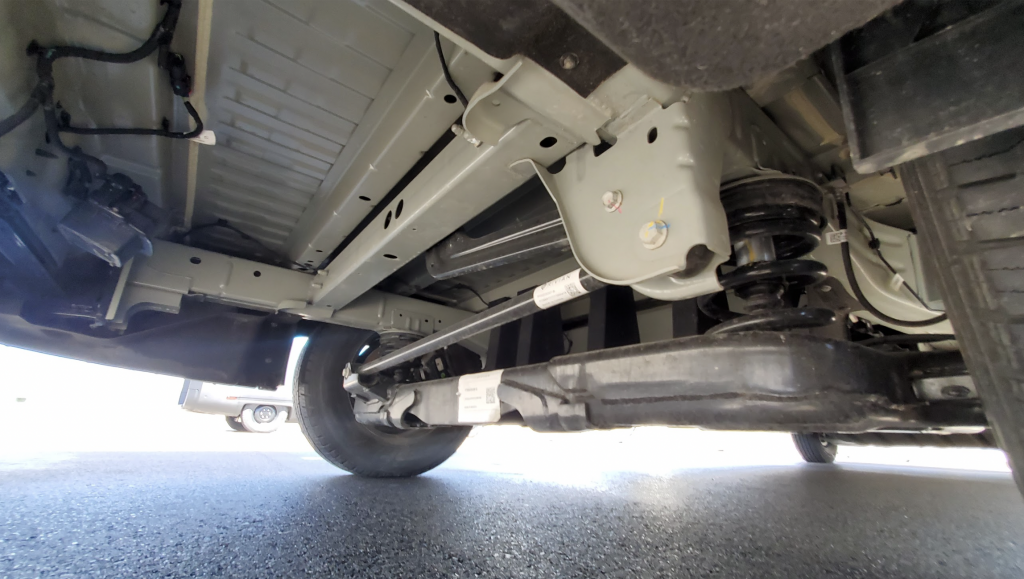 Quick note: I don’t know what that rectangular prism on the left side of the photo above is. It looks almost like a stack-style heat exchanger, but obviously it’s something electrical based on the wires going to it. Hmm. Update: I’m told it’s a noisemaker so people can hear the vehicle when it’s moving. 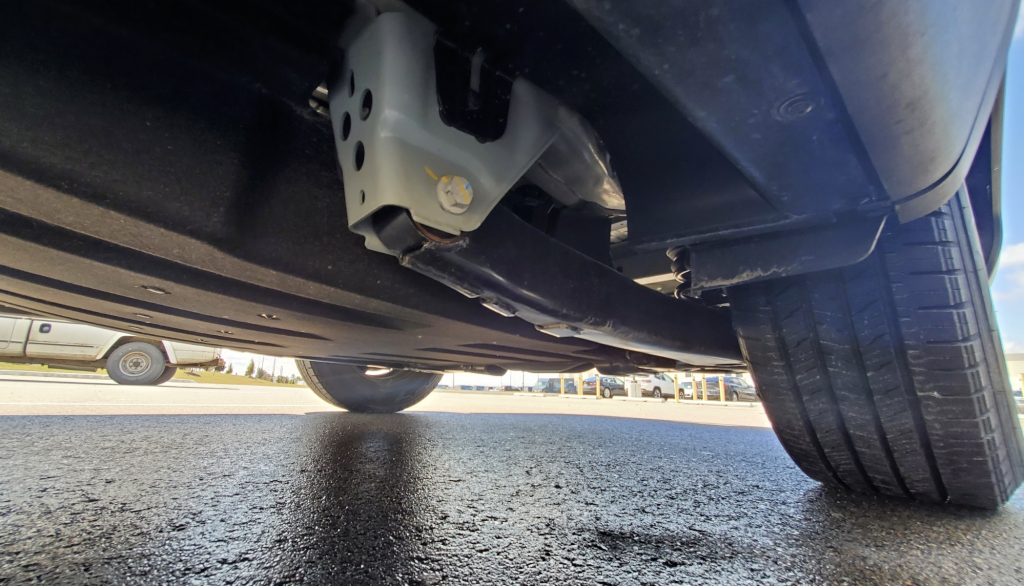 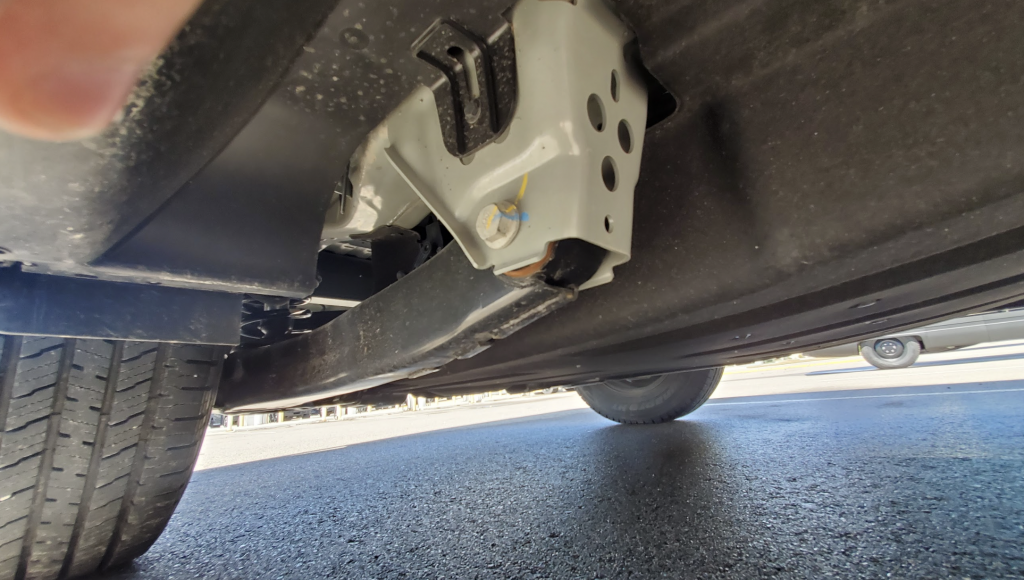 Also visible in the image above is a small tire spat (as Chrysler’s aero team called them) just ahead of the rear wheel to reduce drag. There are some spats up front, too, as well as a big plastic aero shield: 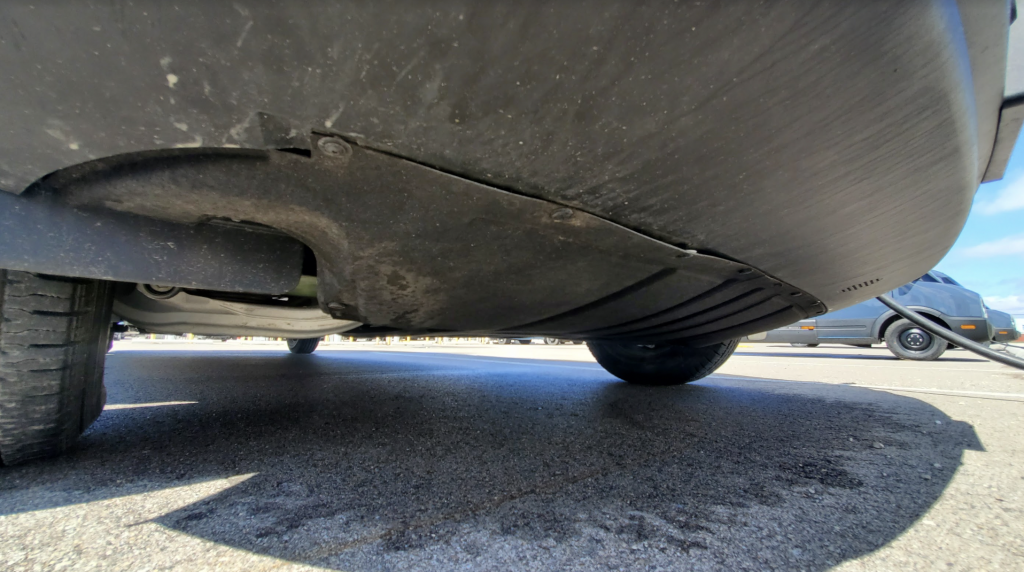 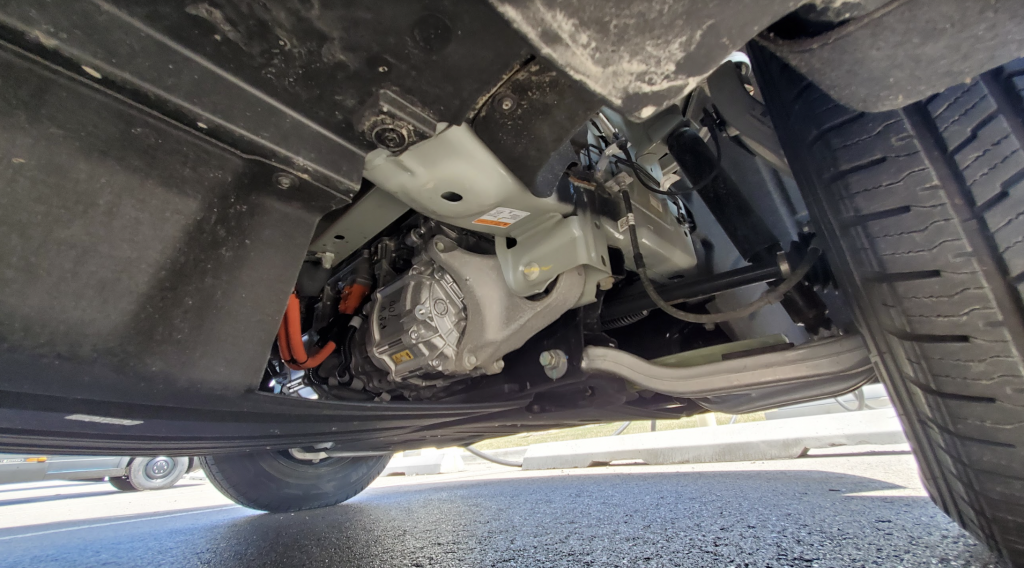 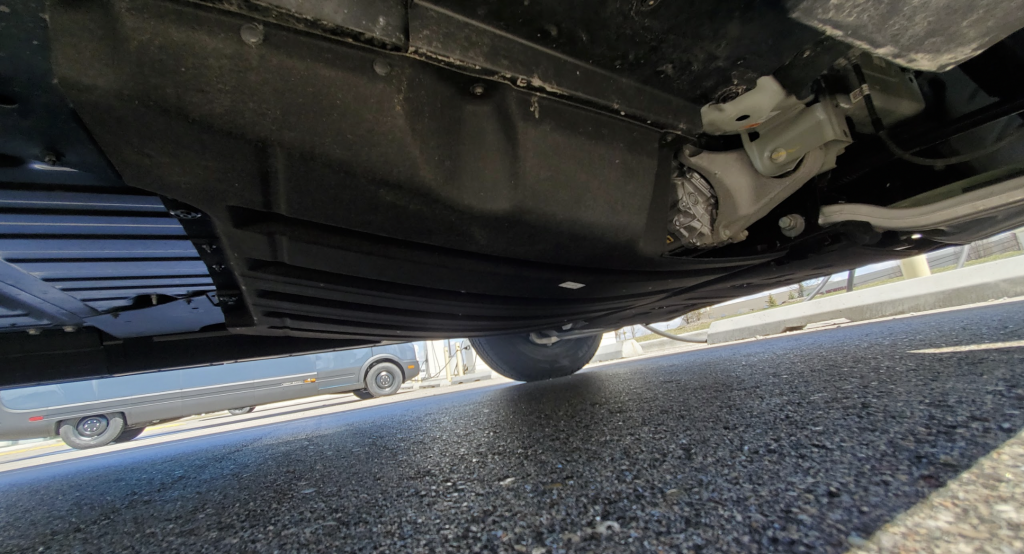 Eventually it comes to an end, exposing the battery pack shield. You’ll see how there’s only a small bit of the underbelly exposed, as that huge rear aero shield meant to divert air under the twist beam reaches quite far forward: 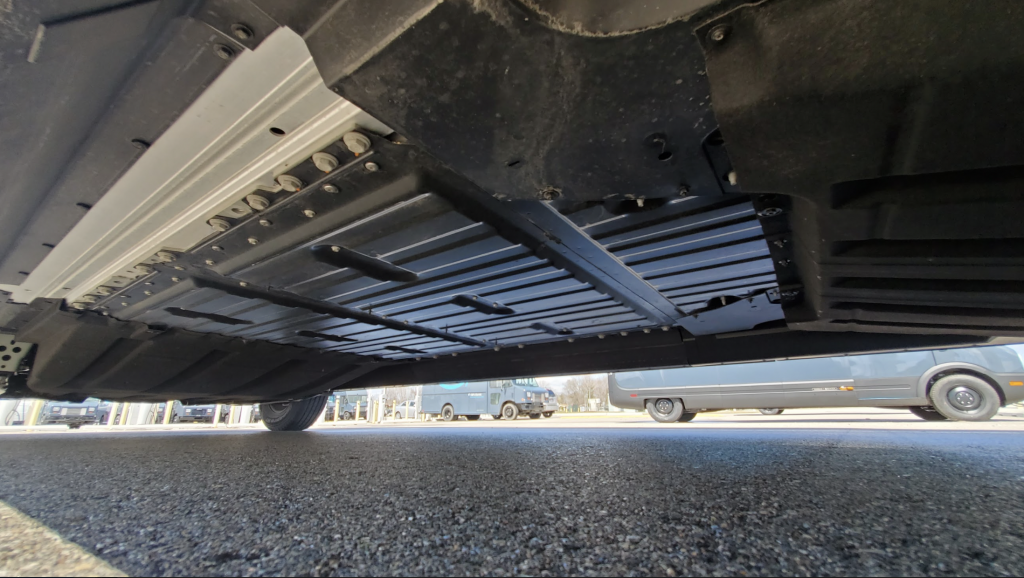 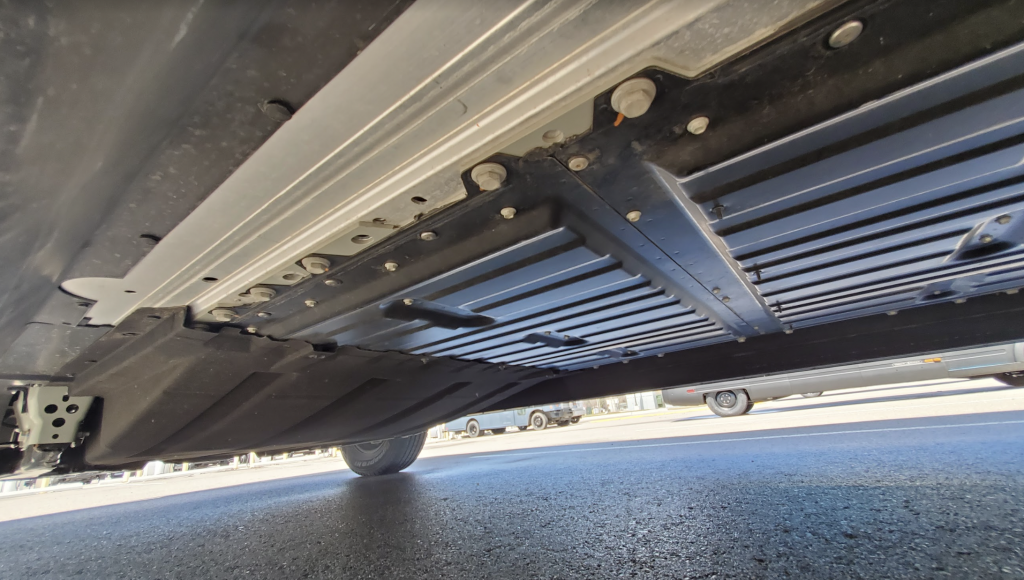 Let’s move back towards the front of the car and peek at the suspension: It’s a double-wishbone design. And, as a reader pointed out in the comments below, you’ll notice that there’s no coilover or coil spring or traditional leaf spring or torsion bar. Instead, you’ll see a white thing attached to the top of the lower control arm — that’s a composite transverse leaf spring. That’s pretty bizarre if you’re used to passenger cars (as for cargo vans, I’m told the Iveco Daily cargo van uses a similar spring arrangement). You might recall seeing such a layout in a Chevy Corvette or an SPA-platform Volvo, with the former more similar to this EDV since it also uses a transverse leaf as part of the front suspension. Another vehicle with a transverse front leaf spring? The Ford Model T!. 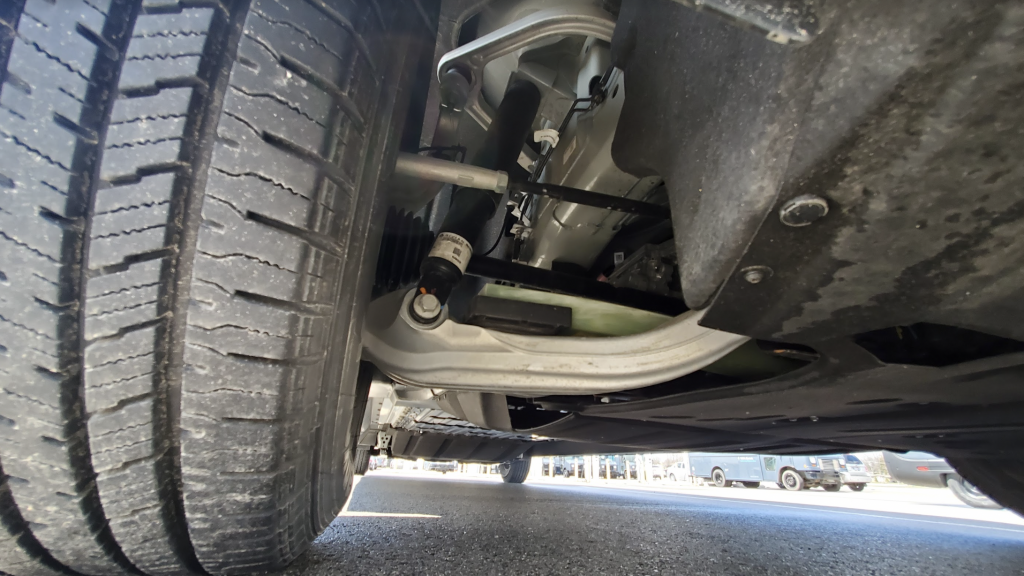 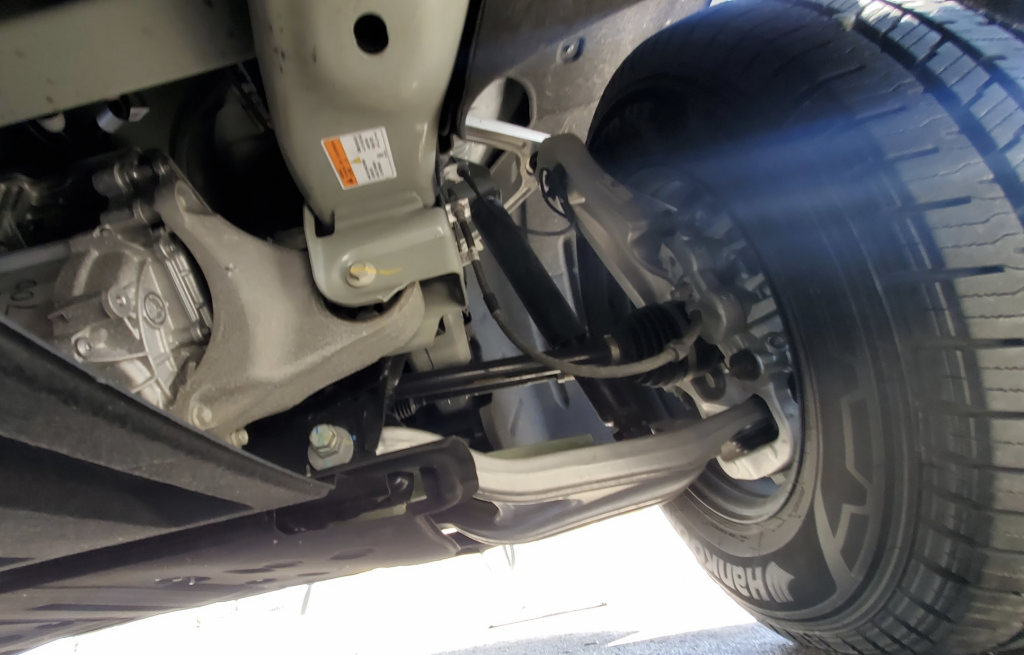 You’re naturally going to be curious if any of the parts are common with those of the R1T, and — looking at the two together (that’s the R1T’s front suspension below) — I’d say maybe the tie rod ends, but that’s about it. The basic front suspension design is similar, sure, but as for parts sharing, I don’t see anything obvious: 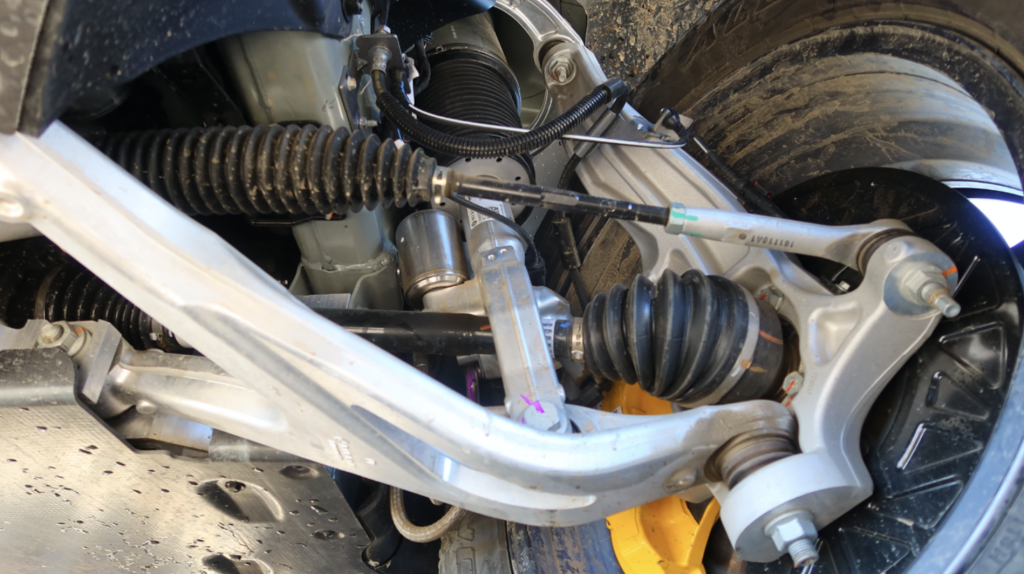 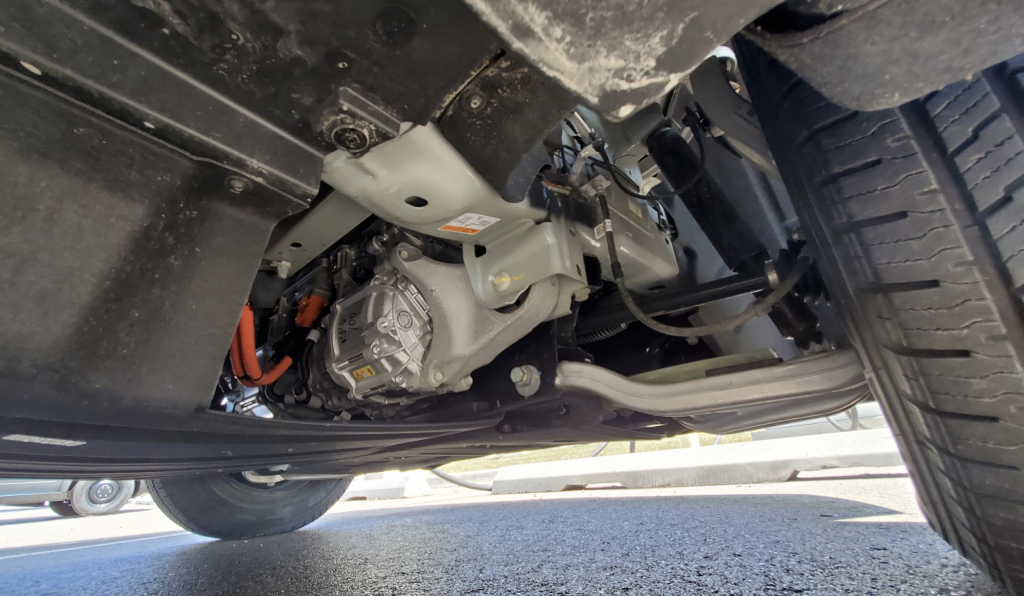 This is a front-wheel drive truck, so the drive unit sits just aft of the front axle, with the gearbox output ahead of the motor. Notice how the unit hangs off the frame via what looks like a cast aluminum bracket that bolts onto a mount on the frame. I find this interesting, because presumably this drive unit is fastened to the front subframe, which is fastened to the main vehicle chassis/frame. So why fasten the motor directly to the frame?

I’m assuming the drive unit-to-subframe mounting scheme doesn’t constrain the motor sufficiently, so under load, the motor would want to torque — this frame mount is there to prevent that. And I’m guessing it was just easier, perhaps from a packaging standpoint, than constraining the motor via the subframe?

Maybe it’s not that weird. Maybe a drive unit-direct-to-body mounting isn’t that uncommon among EVs? Munro would know. 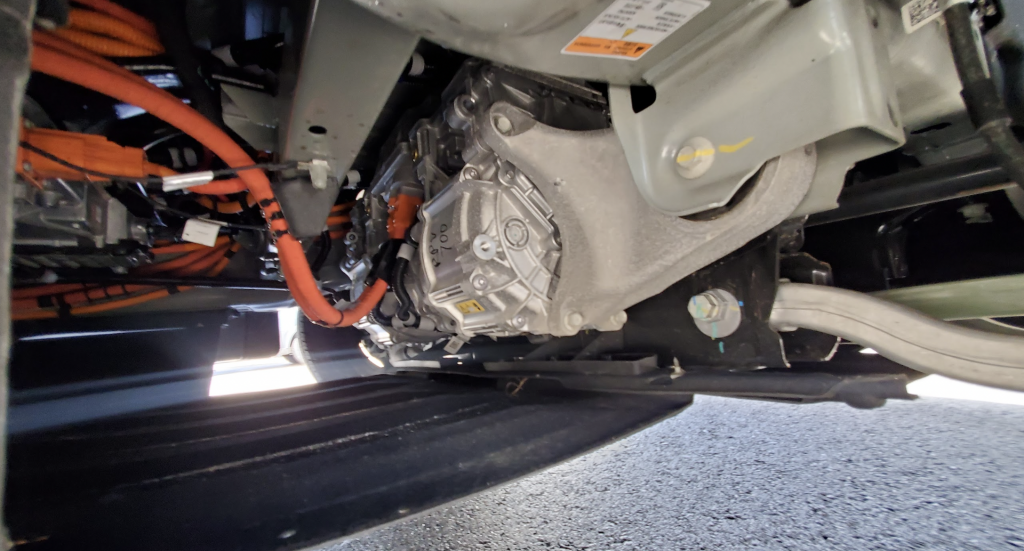 Anyway, you can see that all the power electronics sit aft of the front drive unit, just ahead of the battery pack, and hidden by that huge front aero shield. 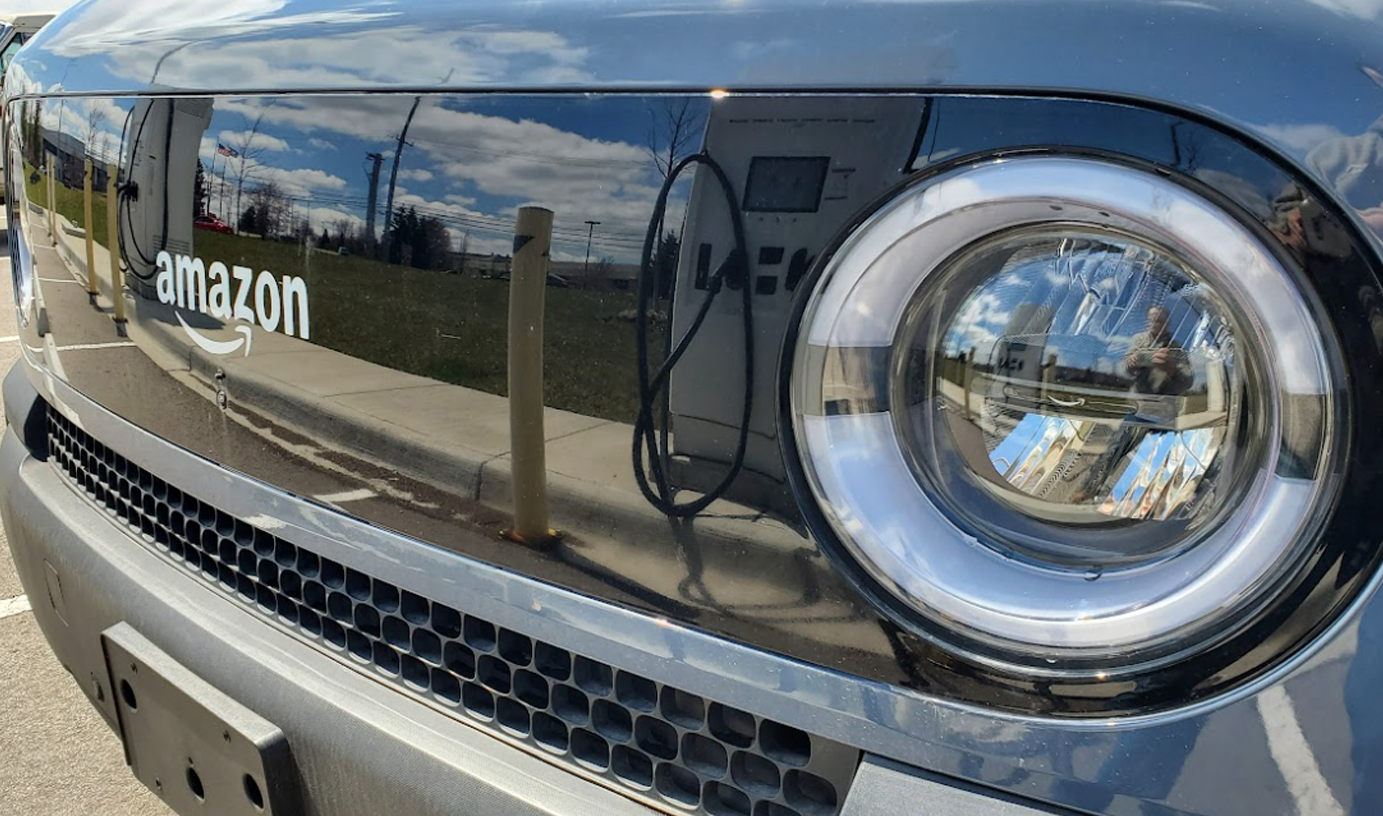 Overall, I’m really impressed that Rivian seems to have taken the time and effort to develop bespoke lighting elements for this delivery vehicle, especially since this particular segment is among the most likely to just use cheap, off-the-shelf lighting. I guess when you have Amazon money behind you, you can have some fun, and it looks like Rivian did. 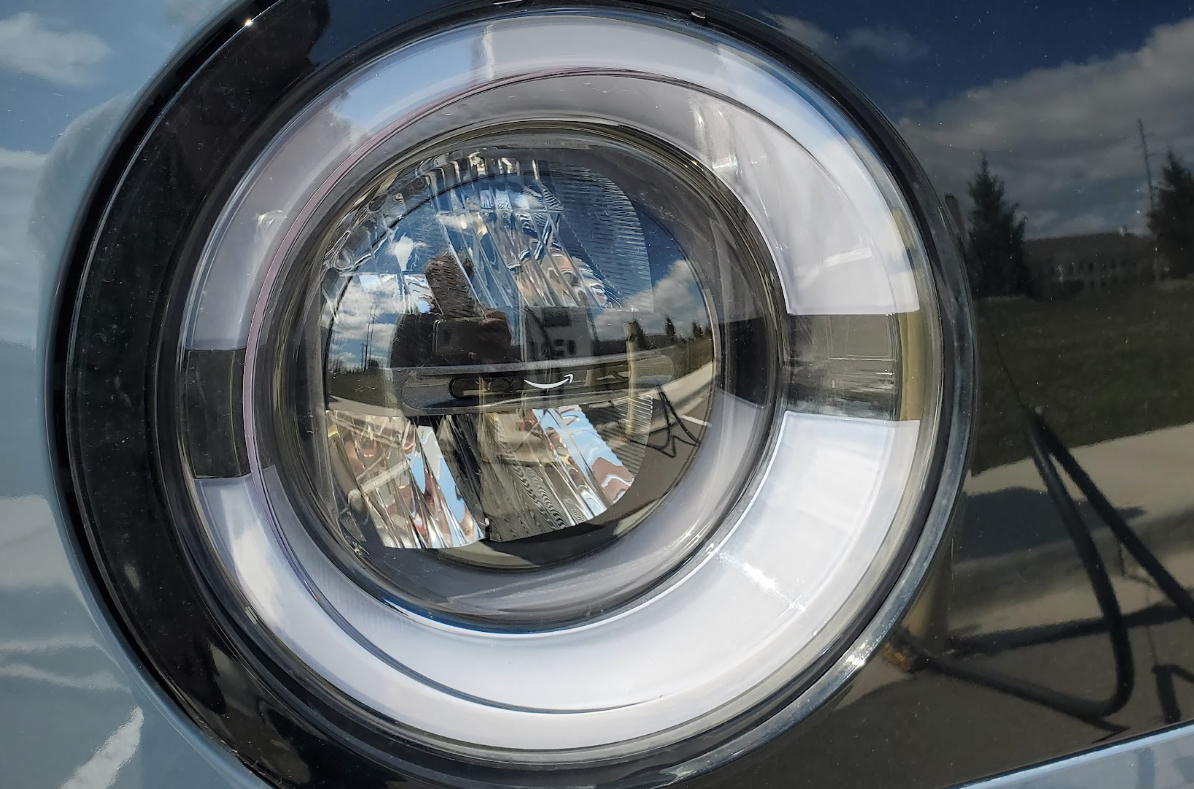 The round headlight/indicator units at the front are key in establishing the EDV 700’s (Rivian’s phoned-in name for the van) simple, friendly face. They also seem to have snuck in a little Amazon arrow-smile thing in the center there.

They’re appealing round units, with an inner clear projector lens and an outer pair of half rings that functions both as a DRL and turns amber for indicator use. 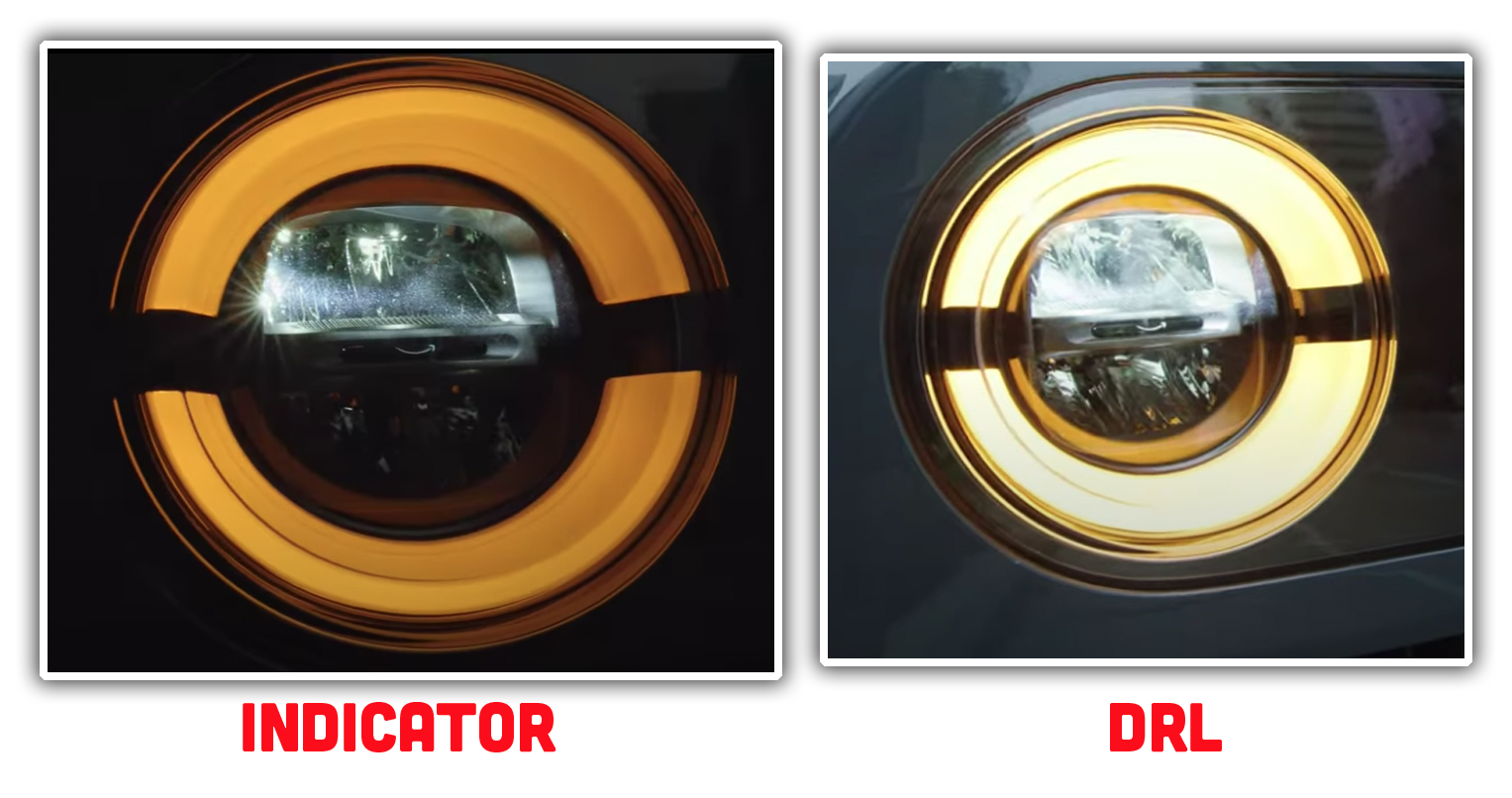 They’re not exactly revolutionary, but the decision for simple round light graphics and that flat glossy black panel is a welcome change from the normal default of an overdone grille and squinty-blob light units that give vehicles a perpetually pissed look.

The EDV 700 looks friendly and eager, like a whale who’s here to help.

Around back, though, we get into something really special. I’ll let David’s earnest shock set the mood here:

I think David is exactly right; this is very likely the longest taillight ever developed by human hands. Even recent Escalades and Volvo V70s, with their massive full D-pillar taillight towers can’t match what’s going on here. The back of the Rivian van looks a bit like it’s designed to dock with a special port, like a spacecraft, with a protruding lip that you can imagine acting as a sort of hermetic seal. 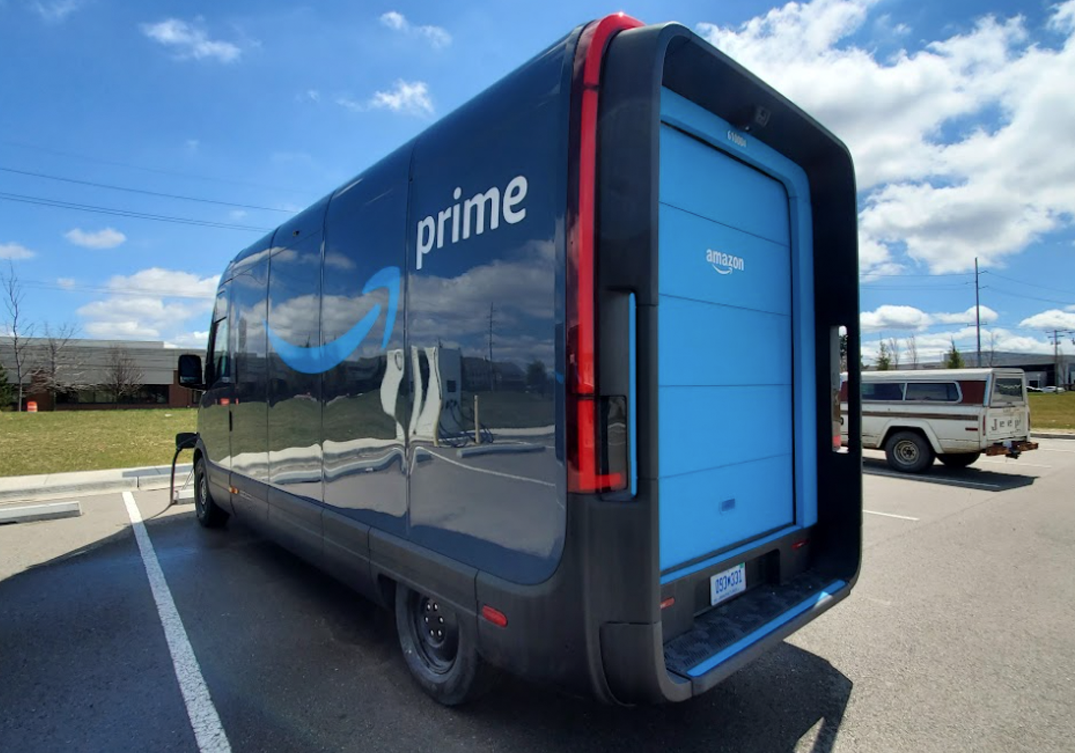 Around that seal, starting about 1/4 from the bottom of the van and going up, over, and down like a horseshoe, is the taillight strip, a ring road of red light. It all appears to be able to illuminate, and at top the strip blisters to form three red clearance lamps. 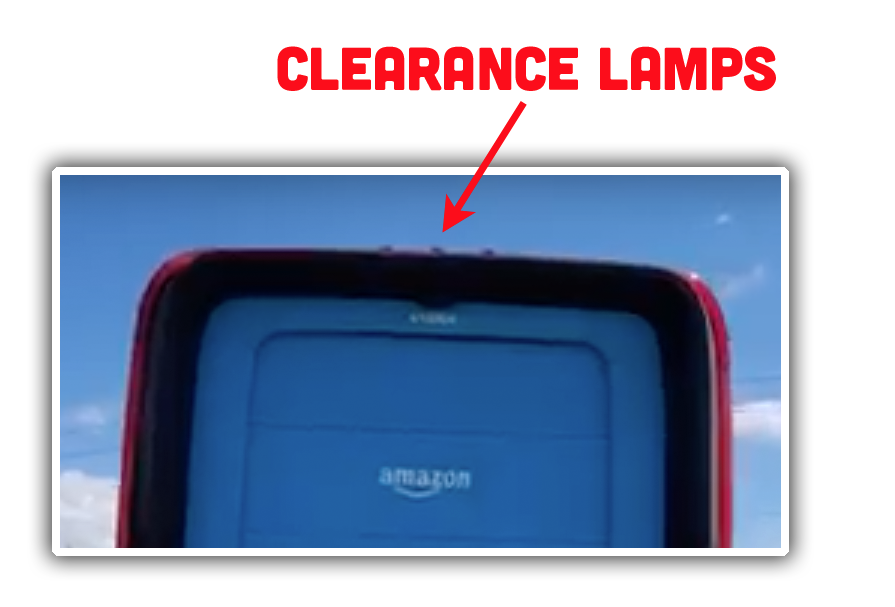 The bottom ends form L shapes on both sides and there’s a dark glossy area that house the rear turn indicators, which, based on video I’ve seen, appear to be red instead of amber, which is disappointing.

Brake lamps may be here as well, or the big red inverted “U” may light up, or both; I haven’t see that yet. 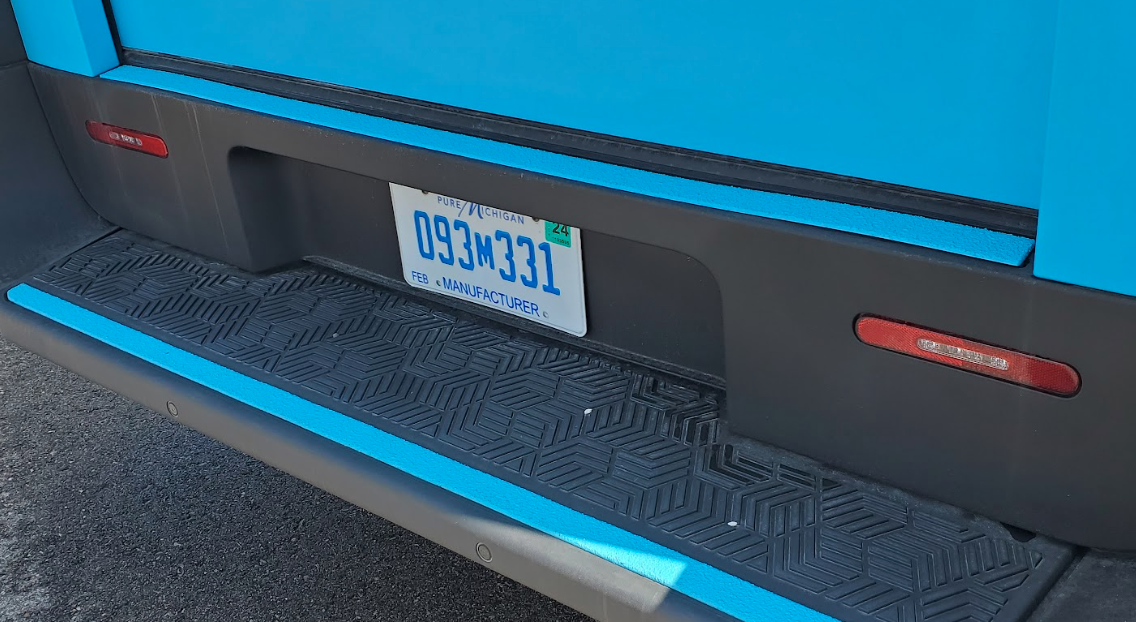 Reverse lamps and reflectors are housed in a pair of frankfurter-shaped units below the rear door. Seems like there would have been plenty of room for these in the main lights, but maybe the reverse lamps give better lighting below? They could also serve to illuminate that step, perhaps? 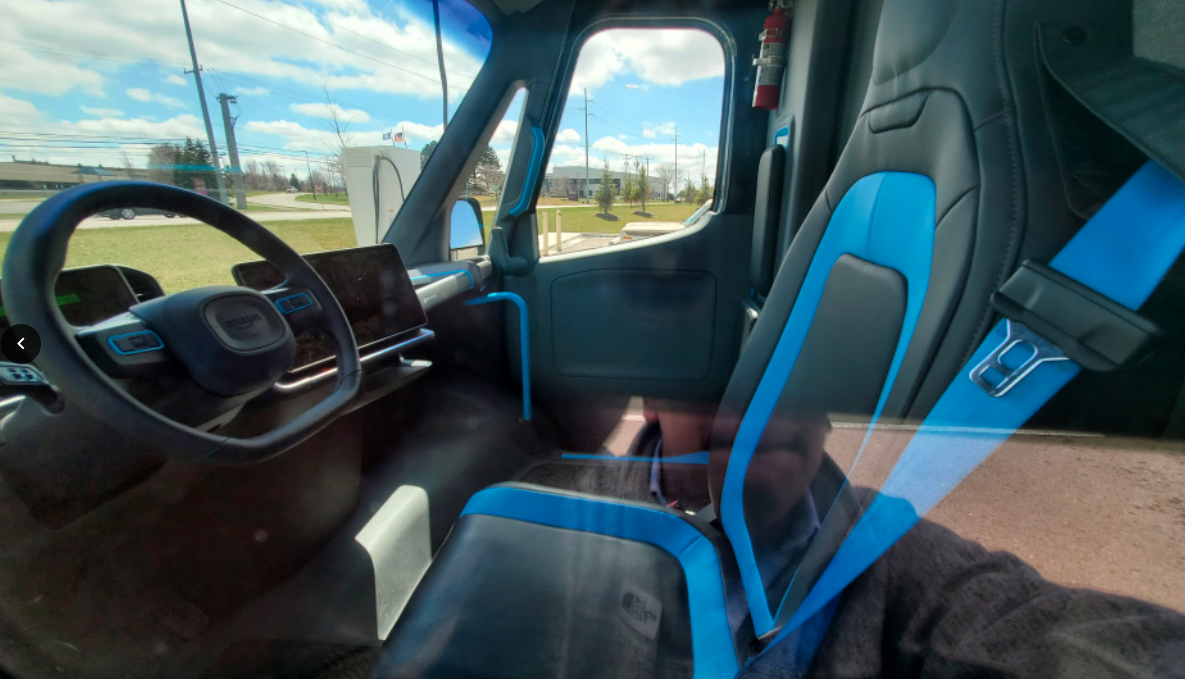 Based on what we’ve heard about Amazon drivers, I think the most surprising omission from the interior is no obvious urinal or urine receptacle of any sort, which–and I’m not kidding here–seems like would be a pretty good idea. If you know your drivers are peeing in bottles, why not offer a better solution?

Urine aside, the interior looks pretty good; lots of hard-wearing-looking vinyls and rubbers and plastics. The blue accents (and kicky blue seatbelt) give some nice color interest to the otherwise grayscale interior, and that seat looks well-padded and comfortable.

The legroom is a little unusual, with a sort of step that runs the length of the cab under the dash, but it doesn’t appear anyone would actually be cramped. The passenger’s side appears to have a folded jump seat, though it’s likely only for very occasional use, like if Jeff Bezos wanted to ride shotgun or something. The instrument cluster appears to be an all LCD screen setup, and the center-stack screen is a landscape-oriented widescreen LCD panel.

All in all, the Amazon EDV is just a lovable and fun machine with the biggest taillight in vehicular history. And if you don’t think that’s great, seek help.

Rust-loving Jeep man, cofounder and EIC of The Autopian, Jason's friend. Email: david@autopian.com
Read All My Posts »
PrevPreviousThis Failed Little Car Could Have Started Car-Sharing In The 1970s
NextCold Start: Landscape Or Colonoscopy?Next