Look At How Much Nicer China’s Ford Explorer Is 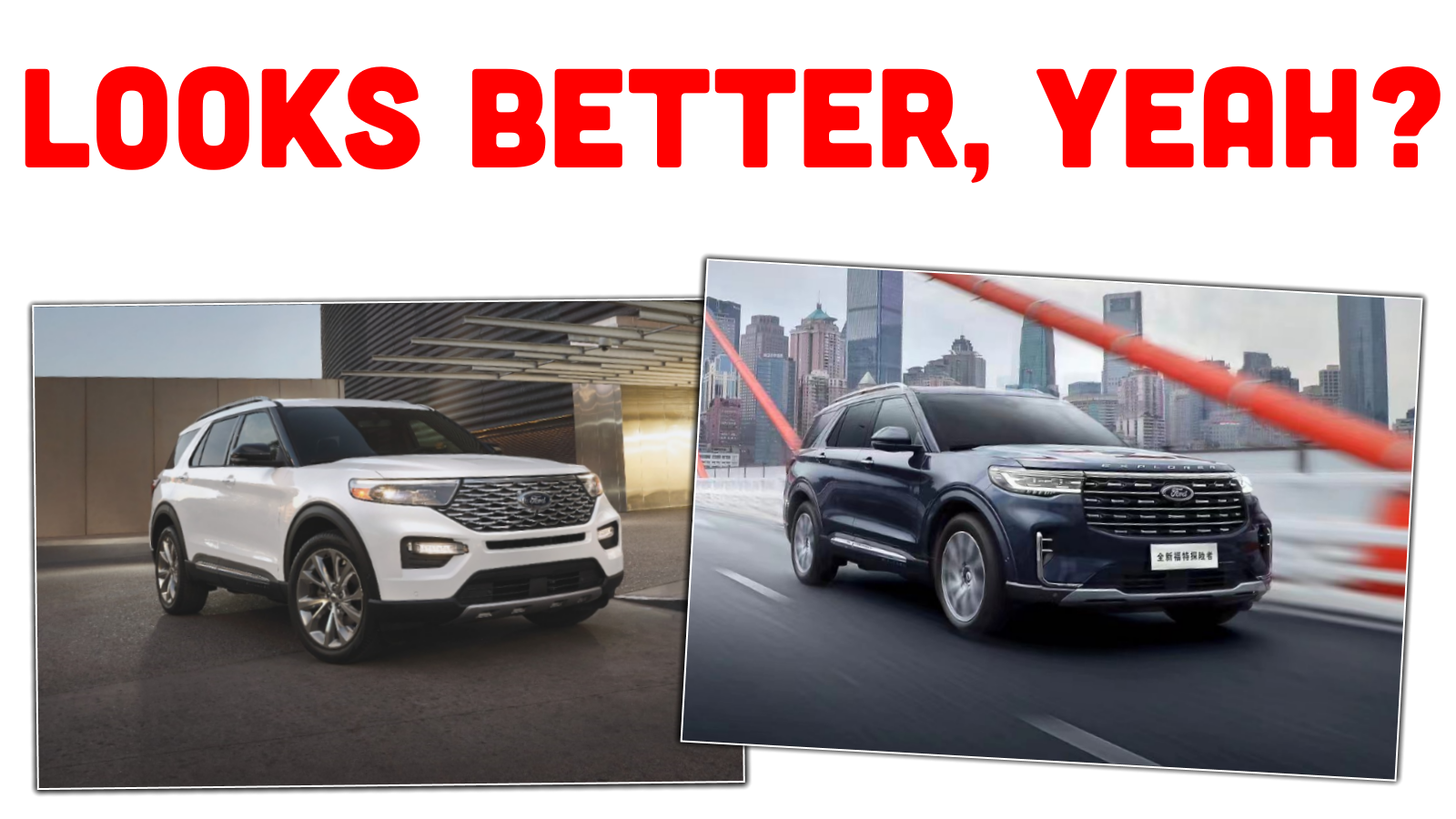 The Ford Explorer has been an American icon for decades. From its infamous rollover scandal to its current status as a popular family hauler, it really defined the family SUV. However, while the American Ford Explorer is tailored for hockey bags and the general vehicular abuse of parenthood, Ford wanted the Chinese version of the Explorer to look like a luxury yacht. Yes, really.

To be honest, I can’t blame the Chinese market for wanting a nicer Explorer. Frankly, I don’t even think the Explorer we get is nice enough for the North American market. General fit-and-finish on my last test car wasn’t spectacular, some interior plastics felt quite cheap, and the hybrid powertrain had a weird clunk when transitioning out of regenerative braking while coming to a standstill. I’m not a huge fan of how the Explorer looks on the outside, and I feel like the interior’s quite far from the interiors of segment leaders. Unless you want to tow or desire awesome snow traction, you can do better when shopping for a three-row family hauler. [Editor’s Note: I think the interior is just fine, but I’m not a stickler for interior plastics. The front end does look kinda weird, but I dig the rear. -DT].

So, in the spirit of doing better, Ford’s China Design Center has been hard at work optimizing the Explorer for the Chinese market. For starters, the Chinese-market Explorer seems to scrap the entire North American dashboard and replace it with something new. Dominating the interior is a ludicrous 27-inch touchscreen that we’re unlikely to ever get in North America. Why? Well, Chinese Sync+ infotainment systems are powered by Baidu and Ford’s rest-of-world Sync 4 infotainment OS isn’t yet compatible with a 27-inch screen.

Really, it’s a bit of a shame that this particular screen format seems China-specific (for now). We North American scum have to put up with a thick-bezeled portrait-oriented screen unceremoniously plastered to the dashboards of our top-trim Explorers. It looks like someone dropped a cheap tablet on the interior model and just left it there hoping nobody would notice. This new widescreen display just works so much better with the Explorer’s wide dashboard, and the Lincoln-like trim treatment on the Chinese model certainly adds to that.

Beneath the infotainment screen runs a lovely band of stitched material, outlining a few understated air vents and a small control panel. It’s a little bit sparse for my liking from a functionality standpoint, but it’s certainly visually-attractive. Plus, at least it’s not entirely a capacitive-touch panel. While the center console appears to echo the band of stitched dashboard material nicely, things get a bit weird when you look closely at Ford’s official press picture.

Yes, Ford’s infamous fake wood makes an appearance on the center console of some trim levels. It’s a bit disappointing seeing such an obviously cheap material in this vastly-improved cabin, an unappealing mark on a shiny new bit of design. Speaking of unappealing, I’m not entirely sold on the dual-tone steering wheel. It may look brilliant now, but imagine how grungy the red will look after 50,000 miles of fingerprints. Look, I know I sound a bit picky here, but details really matter. The average new vehicle is so unbelievably nice that it really is a case of step up or ship out. Thankfully, Ford’s Chinese design studio seems to have mostly stepped up.

Honestly, if you think that the new Chinese Explorer’s interior looks better, you should see the subtle revisions to the exterior. It usually doesn’t cost more money to make a handsome car than it does to make a gopping one, and the American Explorer is the sort of slightly messy design that pushes certain customers away. Sure, the side profile is perfectly alright, but have you seen the front end? I thought we did away with third grilles after we realized that the F25 BMW X3 looked like an unfortunate breeding incident between a pug and an F31 3-Series Touring. Also, just look at how awkward the lines are where the upper grille meets each headlight. Come on Ford, you can do better.

Well, Ford’s designers in China certainly seem to have done better by styling a much cleaner front fascia. Shapelier headlights flow nicely into a large upper grille that deletes the American-market Explorer’s weird middle grille entirely. Big grilles are very much en vogue in the Chinese market, although implementations seem to be of varying success. The current BMW 4-Series hasn’t grown any easier to look at since it launched, but I feel like the big grille on this Explorer works alright. It could possibly use a stronger border, but it’s still an improvement over the American model’s grille. Interestingly enough, the outgoing Chinese Explorer used a similar grille treatment, so we’re really looking at a case of incremental change.

Speaking of grilles, the fake grilles on the outer corners of the front bumper are now vertically-oriented and relatively thin, while the lower fascia treatment hasn’t just been cleaned up, it’s been pressure-washed then steamed taut. Is this new front fascia a touch generic overall? Sure, but I’d take generic over ugly any day of the week.

Around the back, the new Chinese-market Explorer features equally dramatic changes. We’re talking about a heckblende-style full-width rear lamp treatment and a significantly more contoured liftgate that combine to make the rear end look far more interesting than that of the American-market model. Plus, the Chinese model flips the emblems so the Ford emblem is nicely integrated into the tailgate trim while the Explorer wordmark now sits proudly above the liftgate trim. To complete the re-working, the rear valence has been cleaned up with better reflector integration and actual styling, and the whole vehicle is topped off with a black roof. Job well done, I reckon.

Honestly, I can somewhat understand why Ford hasn’t gone quite so premium with the U.S.-market Explorer. It only takes a few thousand dollars to go from a very well-equipped Explorer to a Lincoln Aviator, so some level of walk-up needs to be built in to entice consumers with a luxury vehicle. However, the standard American-market Explorer’s interior just isn’t competitive with class leaders like the Kia Telluride, not to mention that our Explorer’s styling is just a bit messy. While I strongly doubt we’ll see a standardized worldwide Explorer design any time soon, it would be nice for at least some bits from this new Chinese-market Explorer to make their way around the world so we can have nicer rental cars.

Thomas is a Nu Rave-blaring, heel-toe downshifting, maple syrup-swilling, chassis-geeking, junkyard parts-hauling, floppy-haired scenester who's been writing about cars since college. His current ride is a 2006 BMW 325i with the six-speed manual gearbox. Instagram: @thomas.hundal Twitter: @thomashundal
Read All My Posts »
PrevPreviousSame Engine, Different Trucks: 1986 GMC S-15 vs 1986 Jeep Comanche
NextHere Are America’s Most Stolen Cars Of 2021: ReportNext