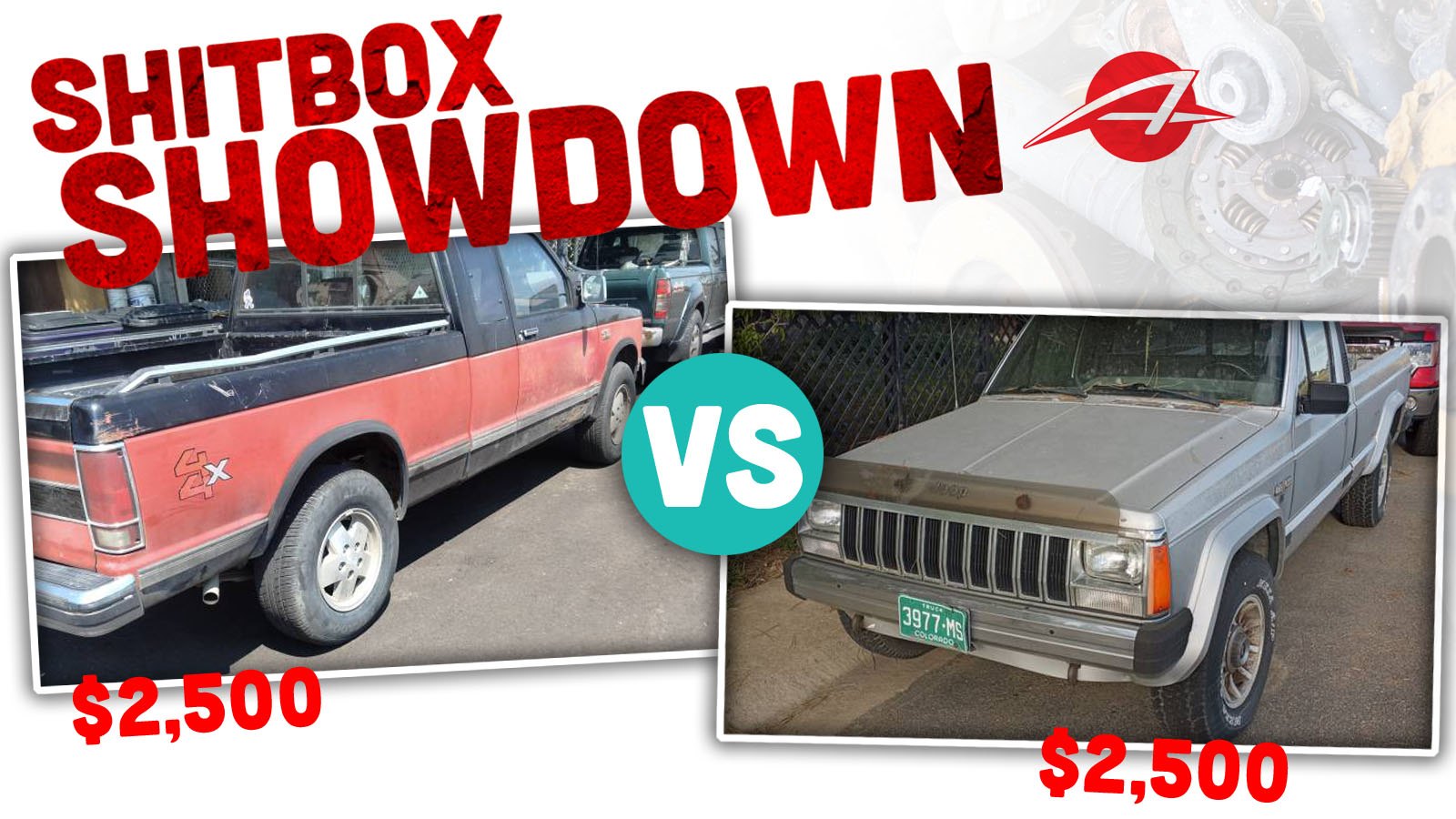 Welcome back! Today, we have a pair of pickup trucks that are the same model year, both compact, both four-wheel-drive, both manual, and have the exact same engine – but come from different manufacturers. How does that work? We’ll get to that in a minute. First let’s check in on yesterday’s dinosaurs:

Ooh, a tight race! But it looks like it’s the Thunderbird by a mere ten votes as of now. Yes, I know it actually shows eleven. I used to be able to see the results without voting, but it won’t let me anymore, so one vote for the T-Bird is me. Usually it doesn’t matter, and usually I end up picking the losing car anyway.

Now then: It’s common knowledge that automakers share engines, and have for a long time. Often smaller or struggling automakers will buy engines from one of the bigger companies to spare themselves the cost of developing their own engine. Think Lotus and their use of Ford, and now Toyota, powerplants, or Iso and their Chevy V8s. And even big automakers will buy engines from one another to fill in holes in their lineups or make do while they develop a new engine of their own, like Chrysler using VW and Peugeot engines for the Omni/Horizon, or GM tapping Honda for engines and transmissions for the Saturn Vue.

Back in the 1980s, and continuing well into this century, GM’s 60-degree V6 was the Judy Greer of engines: it appeared in everything. First introduced in the X-body cars in 1980, it hung on for 25 years in various forms in the US, and another five years in China after that. It powered family sedans, pickup trucks, SUVs, pony cars, minivans, mid-engine sports cars – you name it. And for a while, in the mid-1980s, GM sold them to AMC for use in the Cherokee, Wagoneer, and Comanche before David’s favorite engine was ready for prime time.

[Editor’s note: The 2.8-liter V6 was an absolute pile in the Jeep XJ. From what I’ve read, it rarely made it past 150,000 miles without major work. Honestly, people don’t realize how crappy early XJs were if you didn’t get the AMC four-cylinder with an automatic. The Peugeot-sourced five-speed was horrendous, the GM V6 sucked, the front axle vacuum disconnect would eventually get fussy, and I’m sure there are some other early-XJ faults that I’m not thinking of. The interiors were fantastic, though. -DT].

And that’s how we arrive here, checking out two beat-up old pickup trucks from different corporations with interchangeable engines. 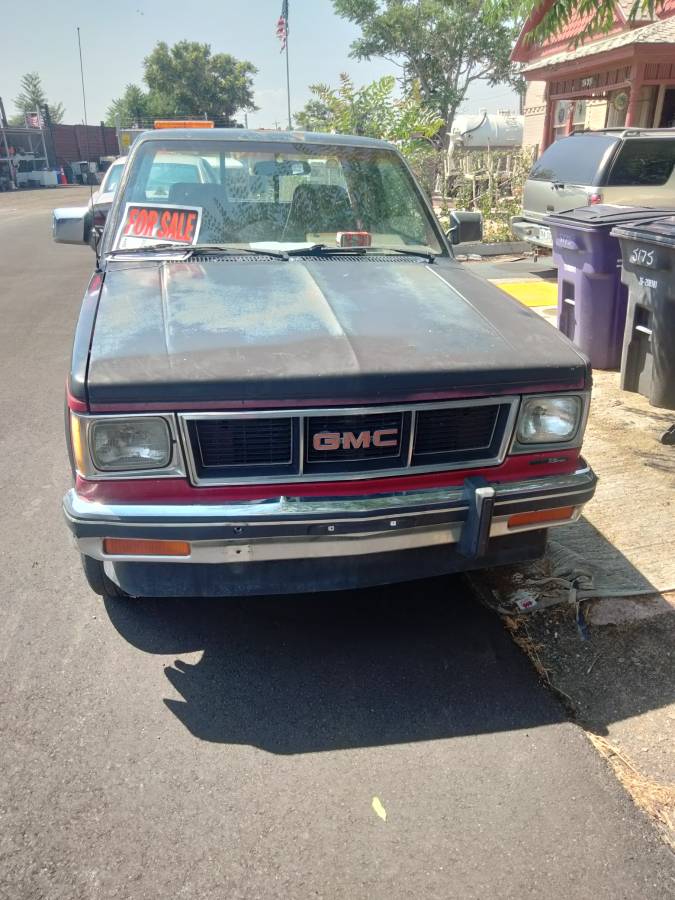 Runs/drives? Well, according to the ad

The Chevy S-10 and GMC S-15 pickups appeared in 1982, replacing the Isuzu-built Chevy LUV compact pickup. The 2.8 liter V6 was an option from the very start, as an upgrade over an Isuzu-built 1.9 liter 4 cylinder carried over from the LUV. I’ve only ever seen one 1.9-engined S-10 in the wild; I think most buyers opted for the V6. Later GM 2.0 and 2.5 liter fours were more popular, but not a lot. 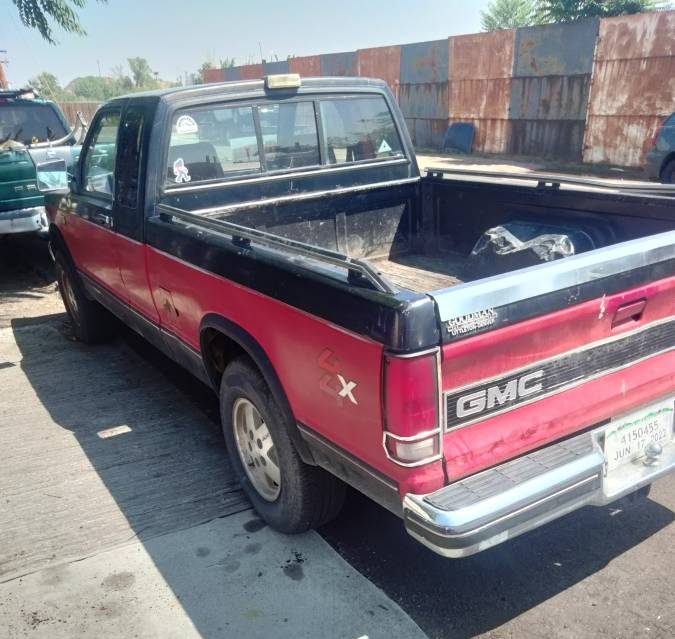 This particular S-15 is a pretty fancy model anyway, with an extended cab and 4WD, and two-tone paint. I bet it was a pretty sharp-looking truck in its day, actually. The small-truck boom was in full swing by 1986, with more and more people opting for a pickup as their primary vehicle, and a heavily-optioned S-15 like this would have been a good choice. 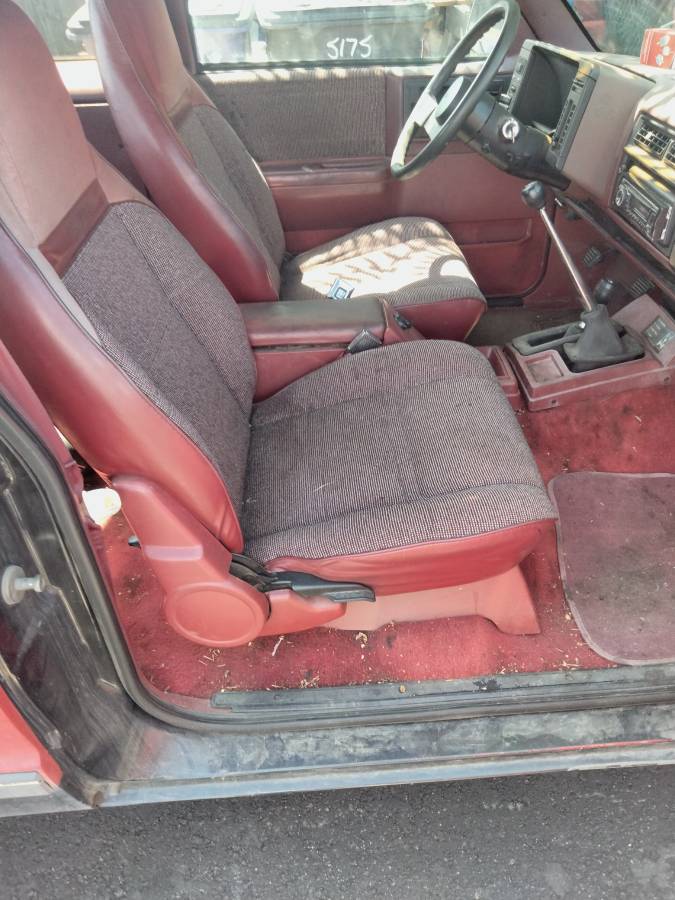 Its glory days are behind it, but it’s not in terrible shape. The interior is intact, and I don’t see much rust to speak of, though there are some dents and dings, and it’s pretty faded. The seller says it runs well and recently passed an emissions test, no small feat for a carbureted engine from the Reagan years. That engine is backed by a five-speed stick and a shift-on-the-fly 4WD transfer case with a low range. 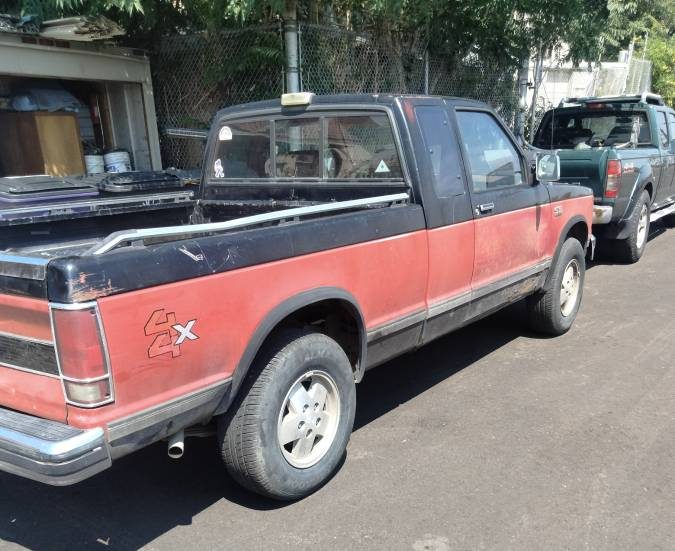 And can I just add that two-tone trucks really need to make a comeback? It’s such a great look. 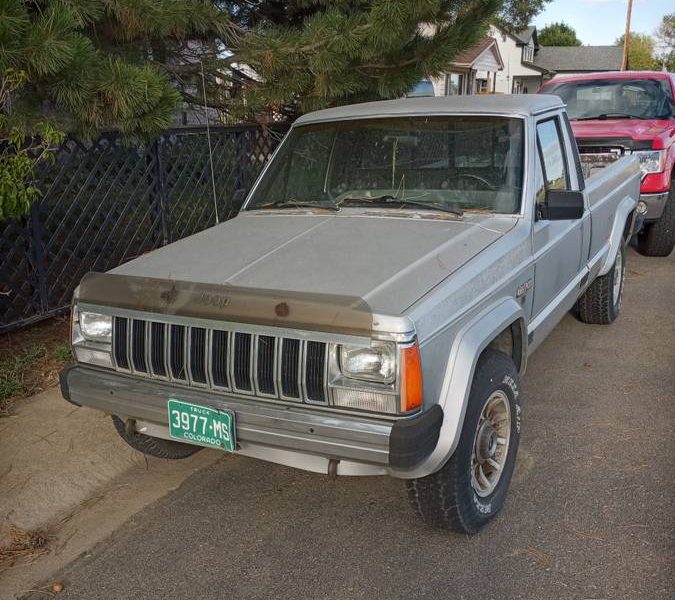 AMC was late to the small-pickup party, but in their defense, they were almost broke. The success of the XJ Cherokee gave them the perfect starting point for a small truck… with a little work. The unibody Cherokee lacked the frame rails that usually make up the backbone of a truck, so AMC grafted basically half of a traditional frame onto half of a Cherokee body to create the Comanche. 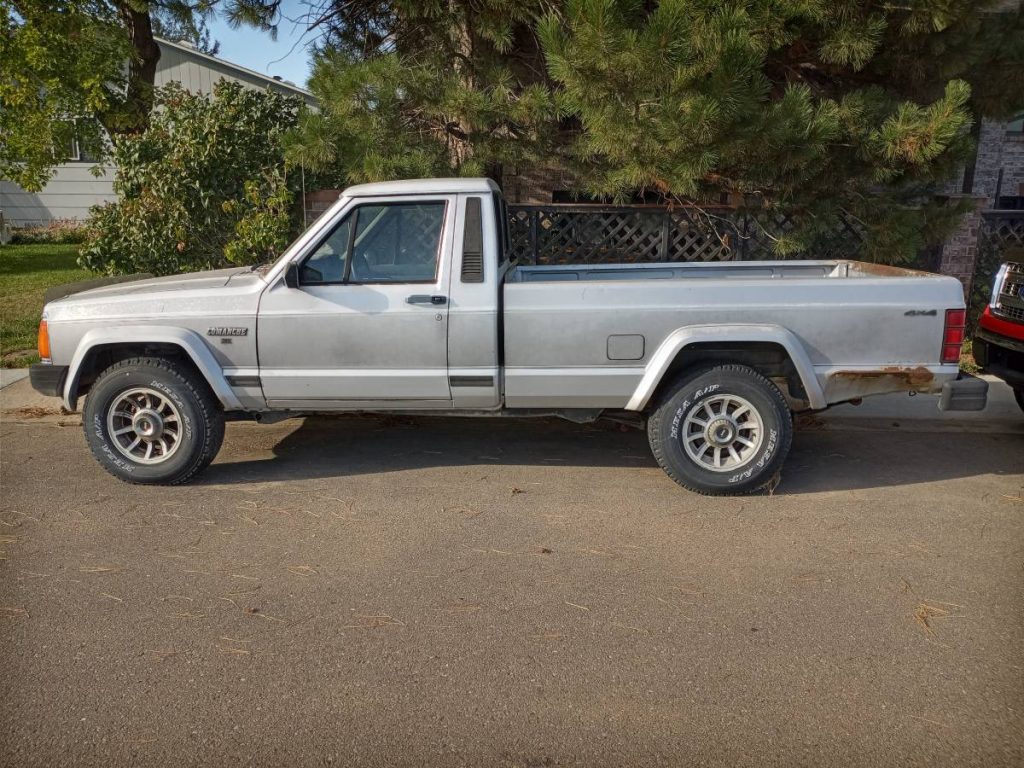 This first-year Comanche has a seven-foot-long bed, a foot longer than a typical small truck bed, but still a foot shorter than a full-size long bed, or the mid-sized Dodge Dakota that would appear a year later. Jeep offered a short bed as well, but due to the unusual frame arrangement, never developed an extended-cab variant. This would be the only year that the Comanche came with the GM V6 under the hood; in 1987 the 4.0 arrived and life got a lot better. 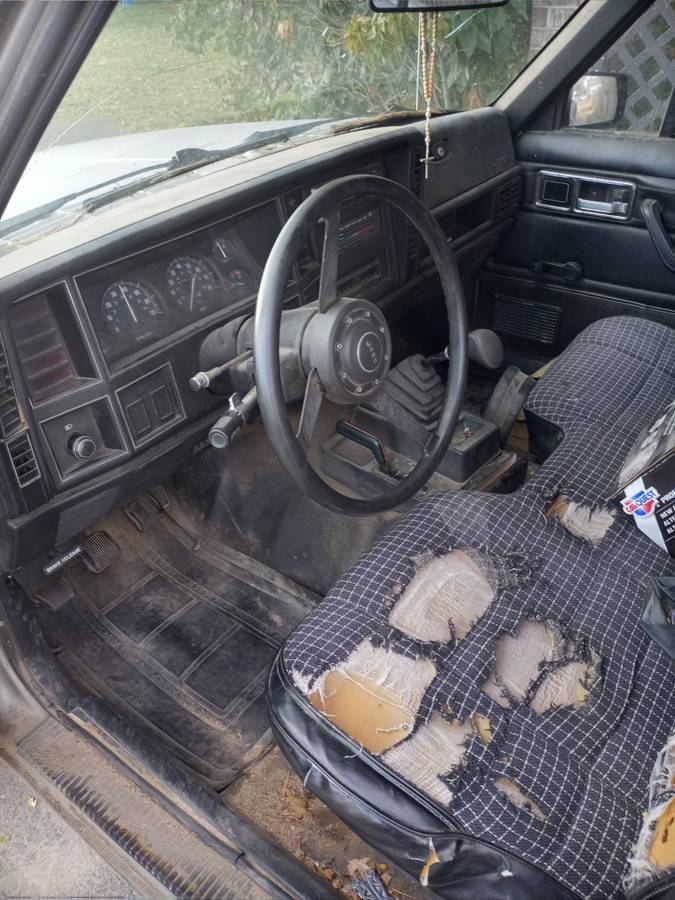 This Comanche is in reasonably good shape, but with a lot more wear and tear inside than the GMC has. But it also has that cool Jeep three-spoke steering wheel. Outside, there is some rust and very faded paint, but that just adds character to an old truck. This 2.8 also runs well, but the truck needs some brake work before it can be driven reliably. The seller also includes some not-yet-installed parts, including an alternator and a carb rebuild kit. No word on whether these parts are necessary or not, but it’s nice that they’re there. 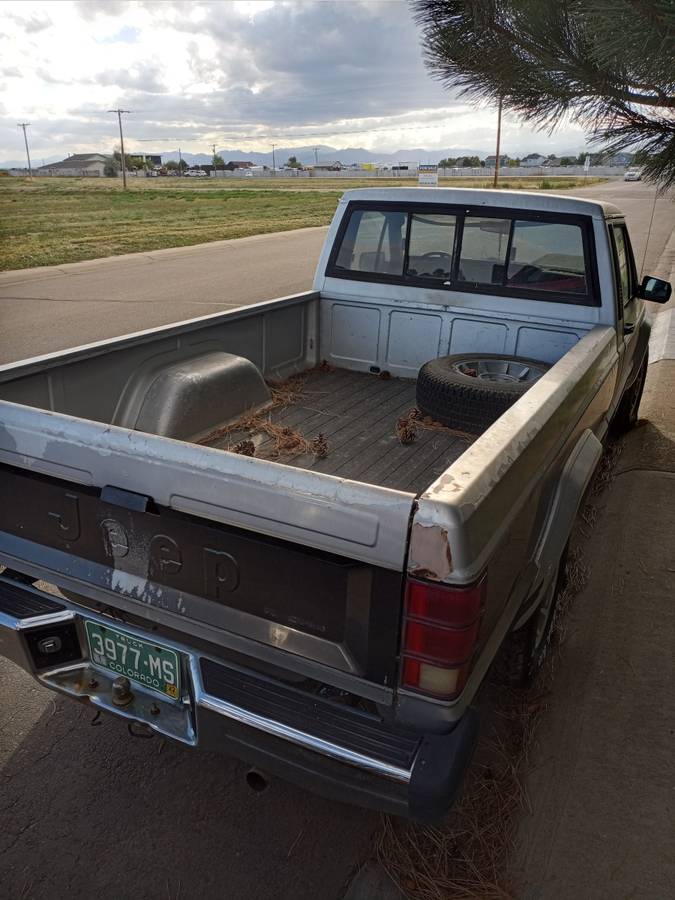 With a solid front axle, this truck is likely a little rougher-riding on road and a little more capable off-road than the GMC, but neither one is going to ride like a Cadillac or climb hills like a billy goat. But for general beat-up-old-truck duty, either one will work.

The GM 60 degree V6 isn’t without its faults; head and intake manifold gasket failures aren’t uncommon, and its performance in small trucks was only so-so, especially the early carbureted versions like these. But parts are as common as sand at a beach, and cheap. And today, it’s your only engine choice. So what’ll it be: GMC, or Jeep?