Good morning, and happy Friday to all of you out there in Autopianland! (Wait–that’s awkward. Can’t just call it “Autopia,” though, or can we?… We’ll figure that out later. [Editor’s Note: No comment. -DT]). Usually on Fridays, I throw out the price cap so we can look at something that isn’t a rusty hulk, but we already did that on Wednesday. So today, I went looking for those most annoying of listings: the ones with no price at all. I specifically avoided ads with “$1” in the listing, because I hate that, and I avoided “$1,234,” because I hate that even more.

But before we get there, let’s circle back to our wagons:

Corolla by a country mile. I couldn’t agree more. I think the only thing that will stop a mid-’90s Corolla is the heat-death of the universe. Or running out of oil; 4A-FEs and 7A-FEs are thirsty critters. Watch that dipstick.

A quick aside: I seem to have ruffled a few feathers by complaining that modern crossovers are badly packaged compared to these old wagons. I know that modern small crossovers sure feel more cramped than older small wagons, but I was curious about the numbers. So I went to Edmunds and looked up the dimensions of our winning Corolla, and a new Corolla Cross. And the numbers don’t lie: despite being more than 9 inches taller, 3 inches longer, and 4 inches wider, the Cross has less cargo room behind the seats, by about 5 cubic feet. Front seat room is more or less a wash, but there’s more hip and shouder room for rear passengers in the old Corolla than in the new. That’s poor packaging.

Yes, some of that is due to all the extra safety doodads and a more bulky structure. I get that. But are you really telling me that 27 years of advances in CAD and metallurgy have meant nothing? Automakers can’t eke out as much interior room from a modern “safe” car with a larger footprint as they could an old “dangerous” one?

But enough about that; let’s look at some more cars. Today’s choices are both offered for sale without a price listed. I know a lot of people hate that, and I’m not fond of it either. It’s wishy-washy and noncommittal, and makes it too easy for buyers to offer a ridiculously high or insultingly low amount. On that point, I’m not saying you should contact the sellers of these cars and offer them typical Shitbox Showdown money for them – but I’m not not saying that either. 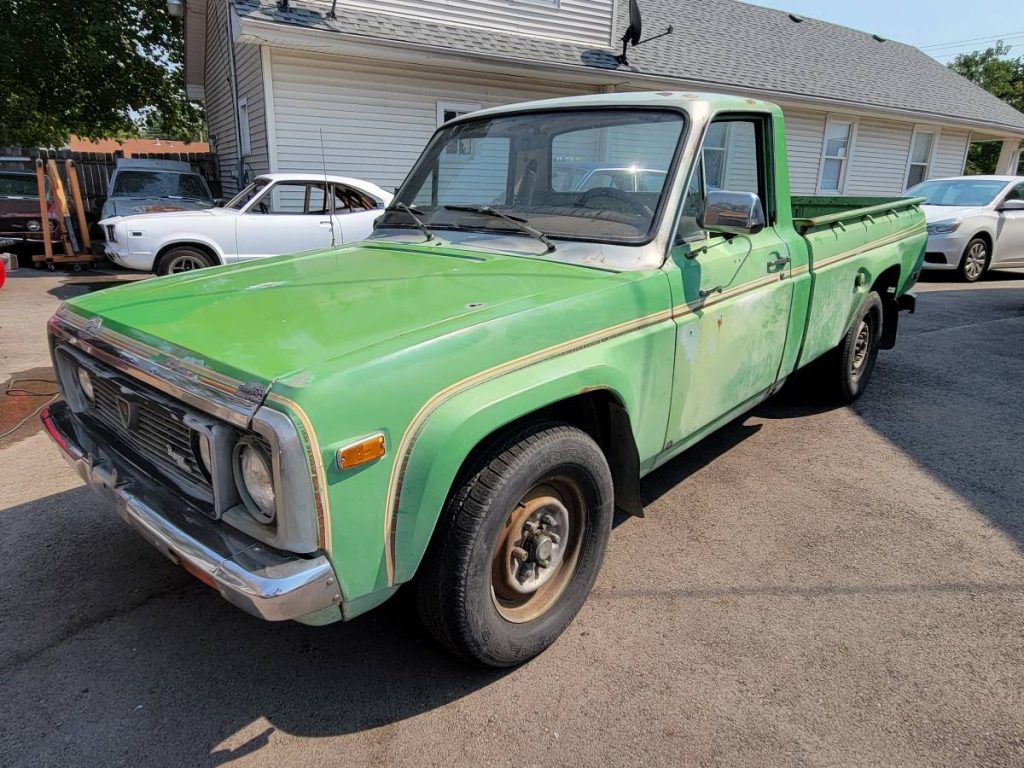 In the 1970s, after winning a war of attrition with everyone else trying to make Wankel engines viable, Mazda set out to “rotary all the things,” as it were. Mazda’s rotary engines found their way into sports cars, family sedans and wagons, pickup trucks like this one, and even buses, with varying degress of success. The Rotary Engine Pickup (often REPU for short) was based on Mazda’s standard B-series pickup, which also provided the basis for Ford’s compact Courier truck. It was an interesting notion, but rotary engines by nature don’t make much torque, and like to rev, which makes them ill-suited for truck use. It didn’t take long for buyers to figure that out, and the REPU only hung around for four years. 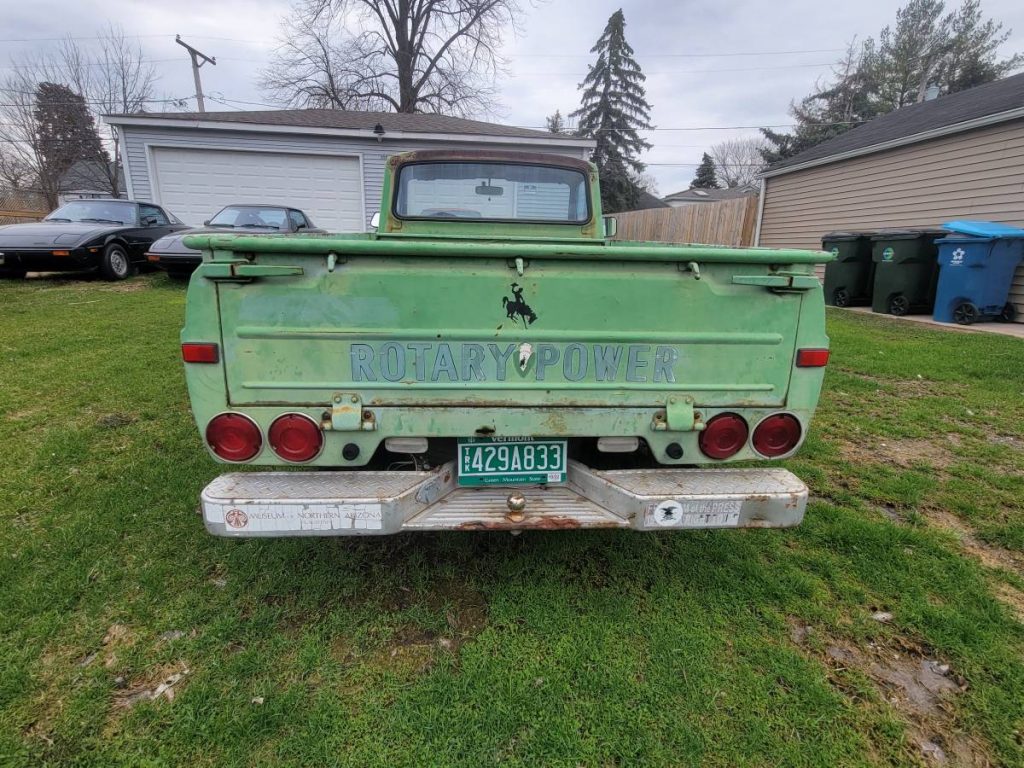 What few rotary pickups Mazda did manage to shift have become sought-after by the Mazda faithful, naturally. It’s a great-looking little truck, and by all accounts fun to drive (I’ve never had the pleasure myself), but not brilliant at hauling or towing or, you know, being a truck. But it has to be fun to bomb around in a mini-truck that makes rotary noises. 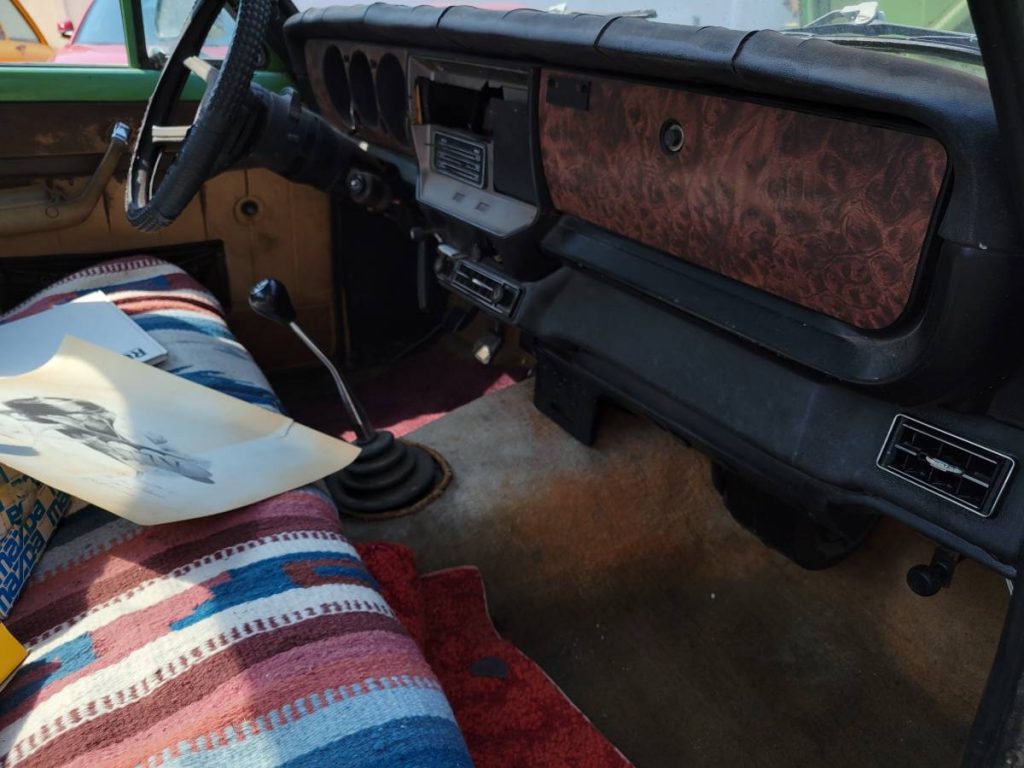 This truck looks pretty clean, with only a little surface rust on the back edge of the cab, and the inevitable cracks in the vinyl dash top. I don’t know what the reproduction parts availability is like for these, with so few made, but I have a feeling you may have to learn to live with the cracks. The seat is covered up by a Mexican wool blanket – a requirement in old pickup trucks regardless of powerplant – so we can’t ascertain its condition. 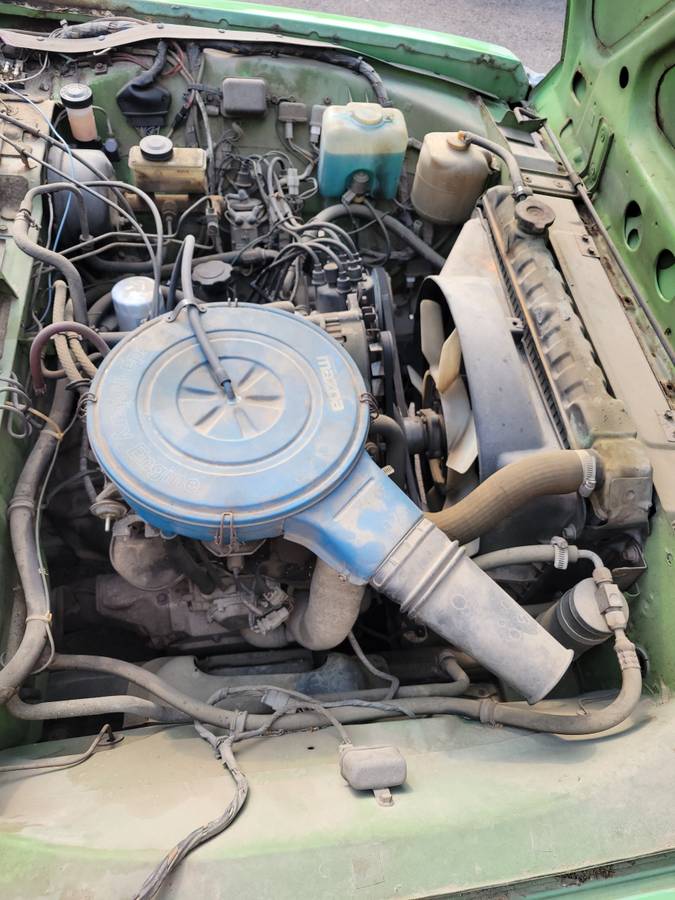 Neither do we have any indication that the little 13B rotary engine runs. The seller mentions that it has factory air conditioning (non-functional) and that the engine is original, but doesn’t specify whether it runs or not. But a rotary with 70,000 miles on it is probably due for a date with a rebuild stand anyway. 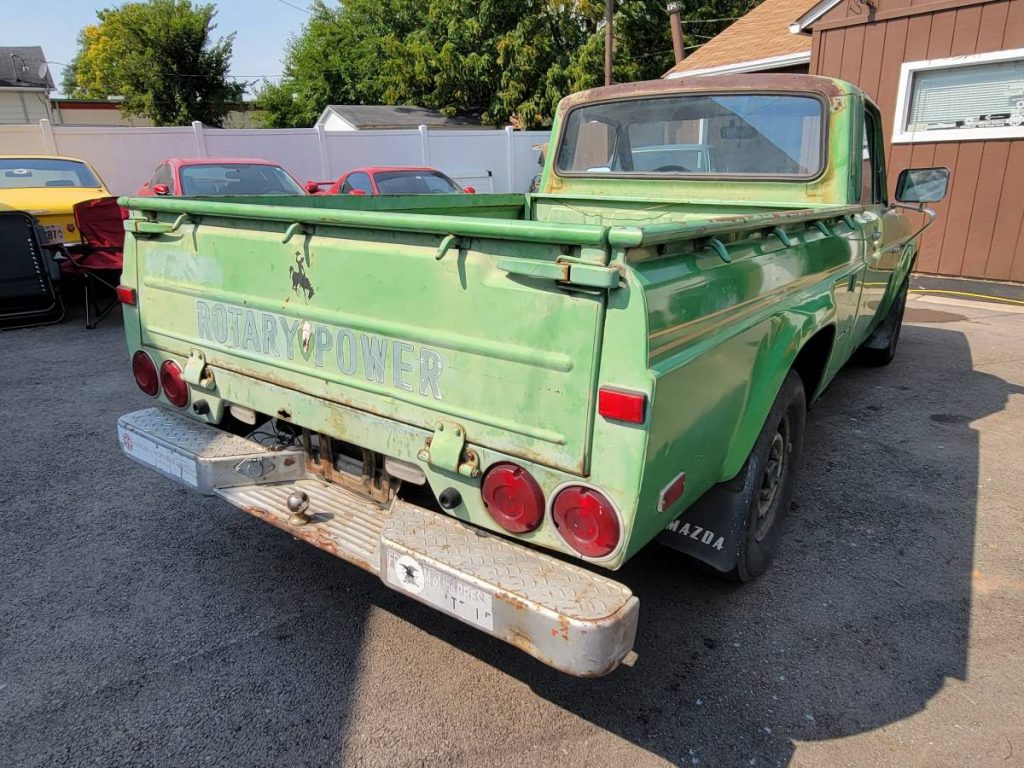 Man, I miss rope hooks on the sides of trucks. Nothing says “let’s carry some shit” like a place to tie everything down built right into the truck.

This truck is listed on Craigslist in Los Angeles, but the ad says the truck is actually in Chicago, but was a California truck. And someone has done the Vermont registration trick with it, which makes me think it might actually run, wherever it is. You don’t bother plating a project that doesn’t run, do you? 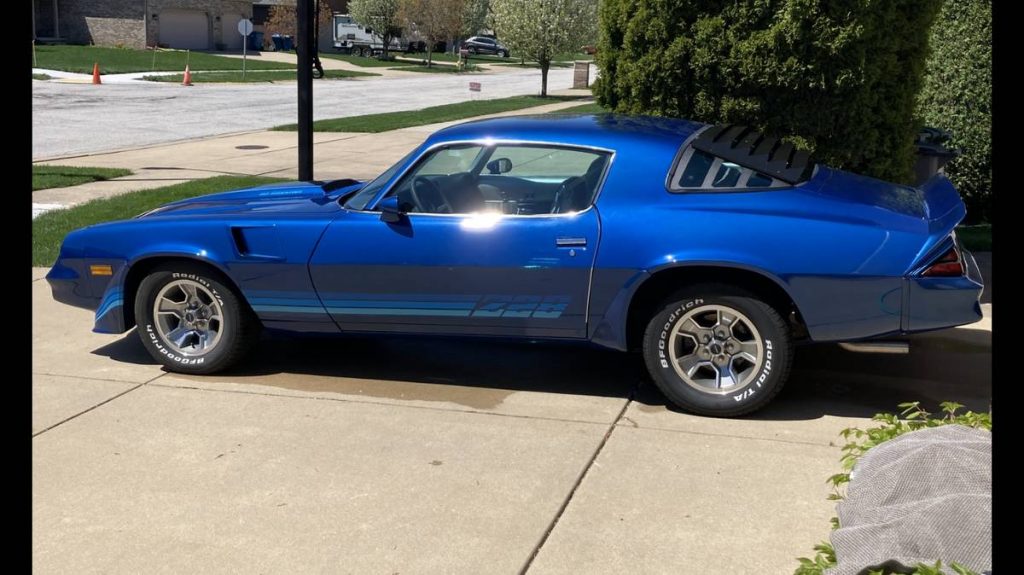 All right; break out your mullet jokes and crank up the Iron Maiden, because I’ve got another Camaro for you. This time it’s the swoopy second-generation, a last-year Z/28 with all the trimmings, and – even better – a four-speed stick. 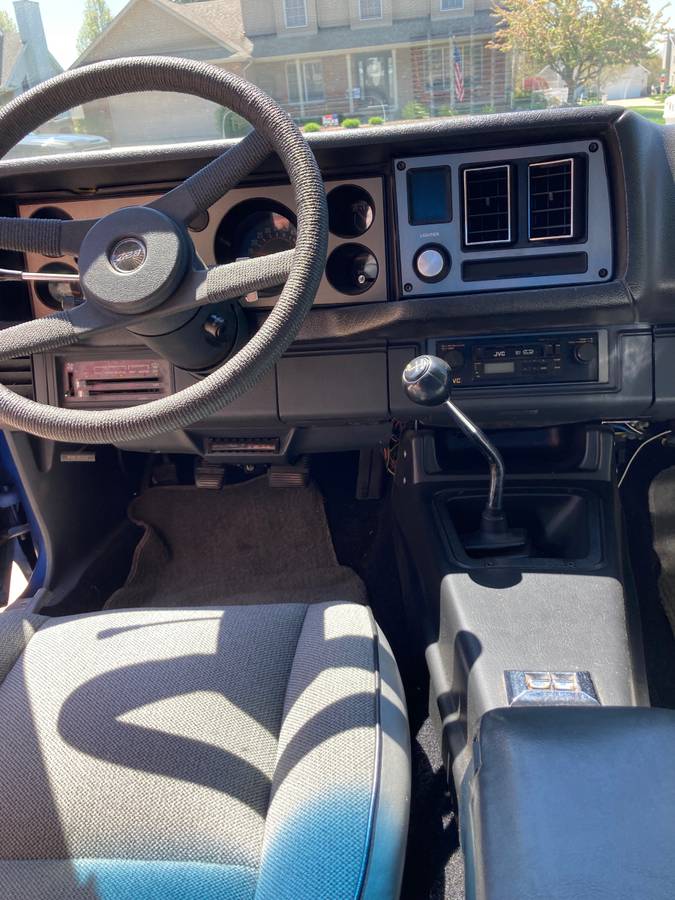 Chevy’s signature cheap-thrills machine was completely redesigned for the 1982 model year, which makes this 1981 model the last of its kind. Vehicles that weathered the regulatory storms of the 1970s with the same bodystyle often got uglier as well as slower as the regulations piled on, but I always thought the Camaro (and its Firebird sibling) wore the required rubber bumpers well. The early second-generation Camaros are gorgeous, but these later ones have a style all their own, and I think they pull it off. 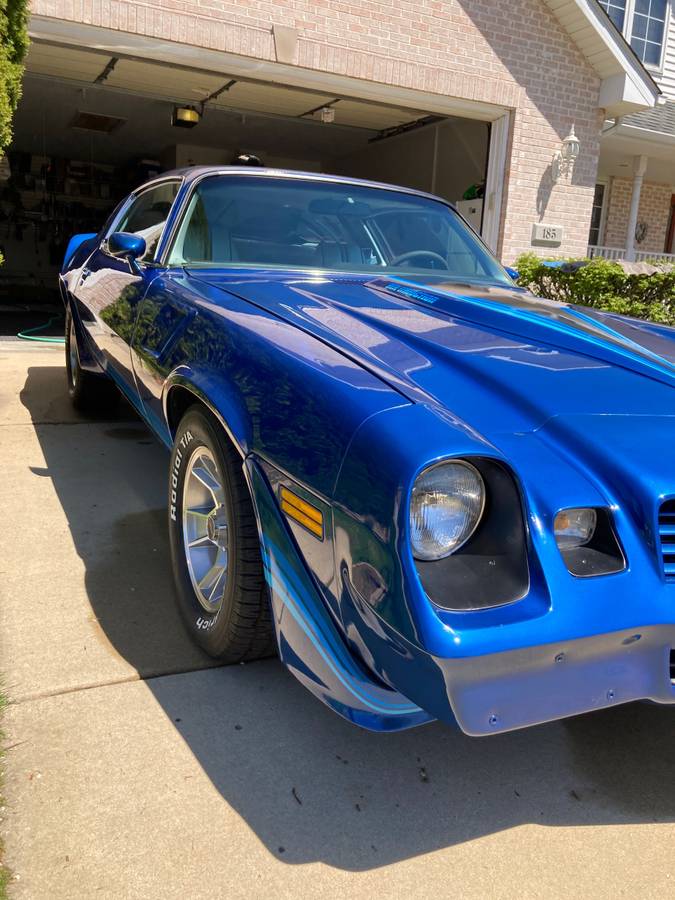 This Camaro is said to have been a lifelong Arizona car, and restored in 2016. It does look nice. It’s certainly the cleanest interior I’ve seen in this era Camaro in a while. Nice shiny paint and what I assume are reproduction decals round out the package. 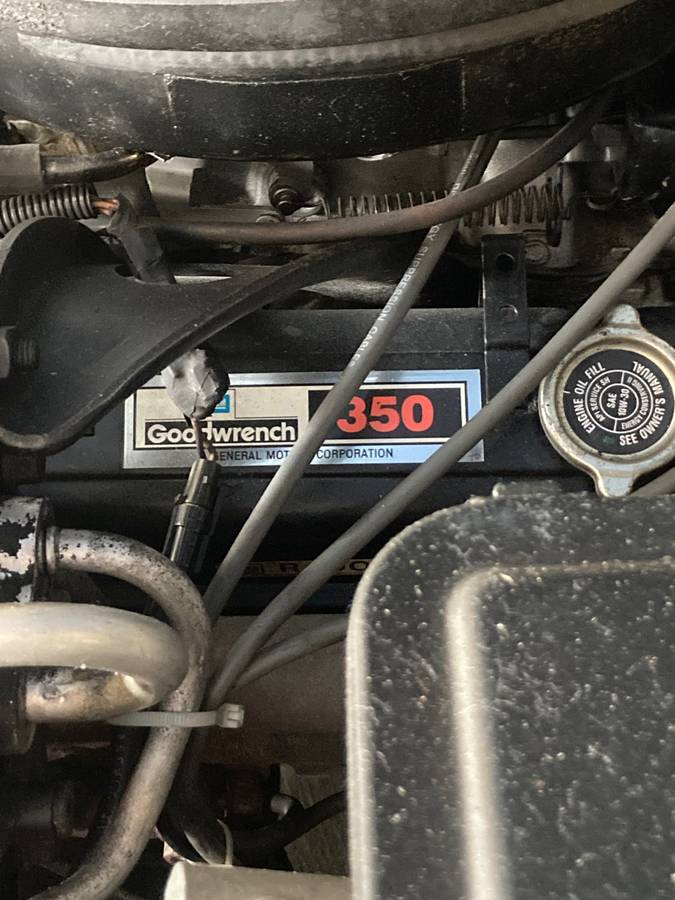 It’s powered by a Goodwrench “crate” 350 cubic-inch engine, which is certainly the quick and easy way to get a Chevy back on the road. It might even have a little more snort to it than the factory engine; these only had 165 horsepower to begin with. Enough to do donuts on your lawn, but not exactly a speed demon. Goodwrench crate engines came in a variety of power levels; you’d have to ask the seller which one this is. 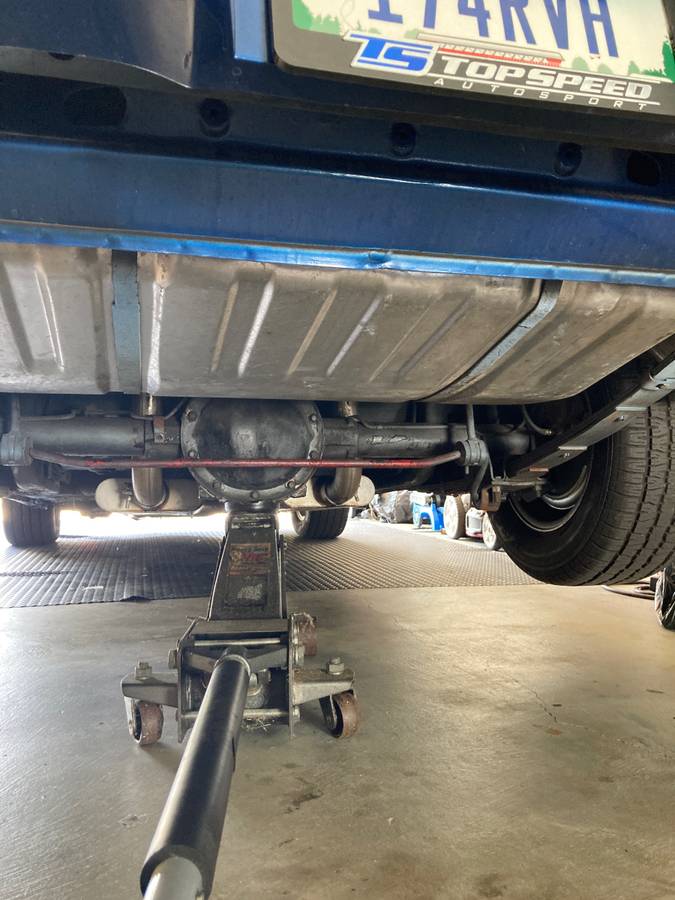 If you’re going to buy a second-generation Camaro, it seems to me that you’d want to buy a good one, or not bother at all, because the bad ones are really bad. This looks like a good one. It’s probably going to set you back some; after languishing in the “Thrifties” section for ages, these cars are finally getting their due. Hagerty lists this car’s value at $35,300 in “Good” condition.

That’ll do it for this week. Tune in next week for… well, I don’t know what yet. But it’ll be a good time. Until then, you’ve got these two choices to mull over. And put your offers in the comments, and on Monday we’ll see who “wins.” Have a great weekend!

Pacific Northwest-based self-taught DIYer of all the things. Current fleet: 1971 MGB GT, 1989 Chevy K1500, 2013 Chrysler 300C, 2003 Infiniti QX4, and 1966 Aristocrat Land Commander trailer. Not to mention about 40 RC cars and around 100 model kits...
Read All My Posts »
PrevPreviousCold Start: One Of The Best Things Seen In a Monterey Car Week Parking Lot
NextHow Audi Is And Isn’t Going To Compete In Formula 1Next