Welcome back! Today, we’re looking at a pair of small stickshift wagons. One of them has some cool toys but hasn’t been well cared for, and the other is ol’ reliable, but about as exciting as plain oatmeal. We’ll get to those shortly, but first, let’s see which car you preferred in our 100th Showdown Extravaganza yesterday:

Yeah, that’s where I’m at too. I like them both, obviously, but I get the feeling I’d get a chance at a better Fiero, or a lesser one for cheaper. The Barracuda feels more like a “now or never” opportunity. I can’t afford either one right now, but if I could, I’d go Plymouth.

Now, today we have a couple of cars that aren’t on anybody’s wish list, but they’re such a useful body style that maybe they should be. Small wagons are just practical as hell, and it’s kind of a shame that they’ve been phased out by stumpy blobby crossovers that promise the same utility, but aren’t packaged nearly as well. I’ve selected two wagons that are both 5 speed manuals, just to take that out of the equation, so there’s no dismissing one or the other out of hand based solely on transmission type. But there are enough other differences between them to compare and contrast to keep things interesting. Let’s take a look. 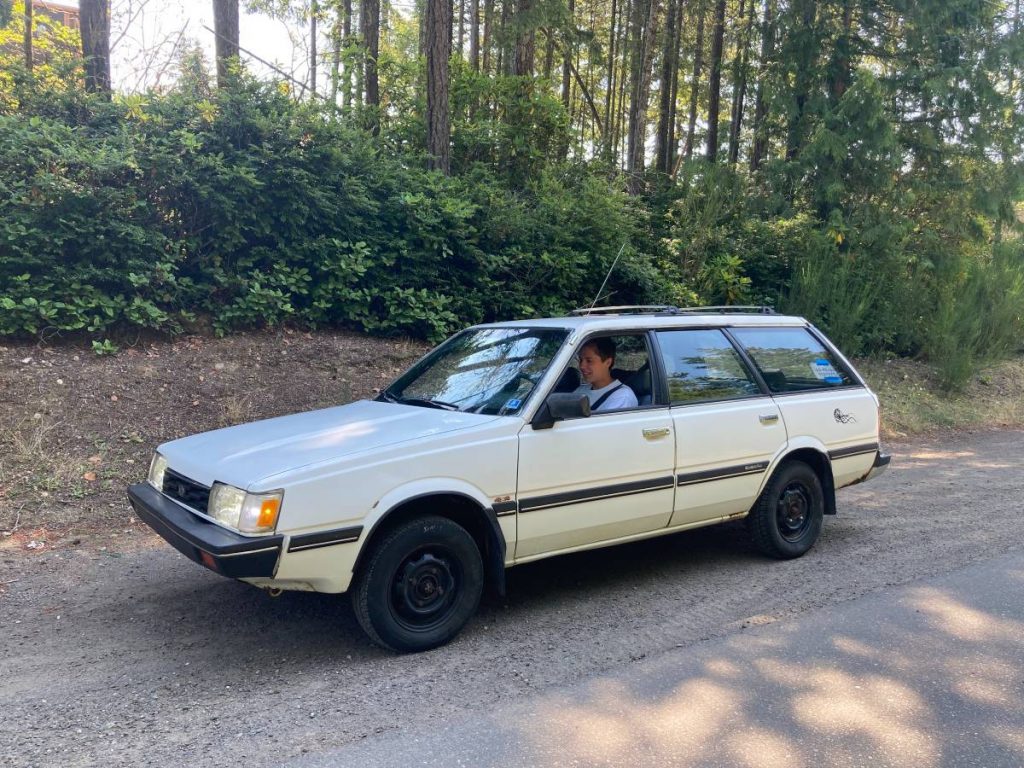 You know those Outbacks and Foresters and whatnot you see absolutely everywhere today? They have this car to thank for their success. Subaru in the ’80s was known for boxy, underpowered cars that were tough as nails and had a lot of weird but cool features available. They didn’t even have model names for most of the lineup in America; instead, you chose a body style (sedan, wagon, or fastback) and a trim level (DL, GL, or GL-10) and mixed and matched as you saw fit. 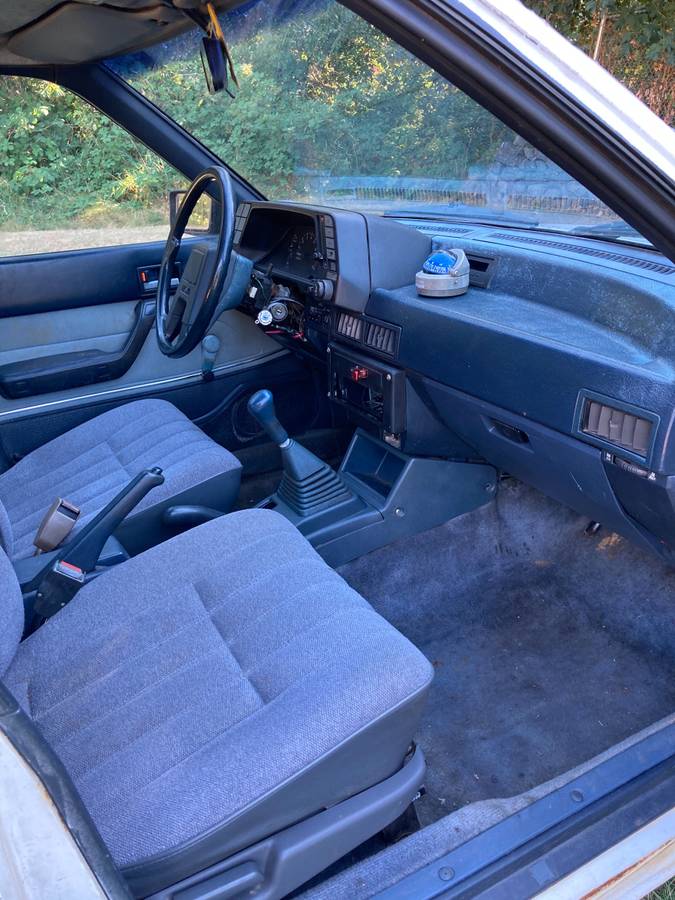 This GL wagon would have been in the middle of the range, with a carbureted version of Subaru’s EA-82 flat-four. 4WD was optional in Subarus when this car was built; this car not only has 4WD, but the fancy 4WD system with a low-range transfer case and a lockable center differential. It’s a far cry from the viscous couplings and electronically-controlled limited-slip diffs in today’s AWD systems, but it works a treat in snow or mud. 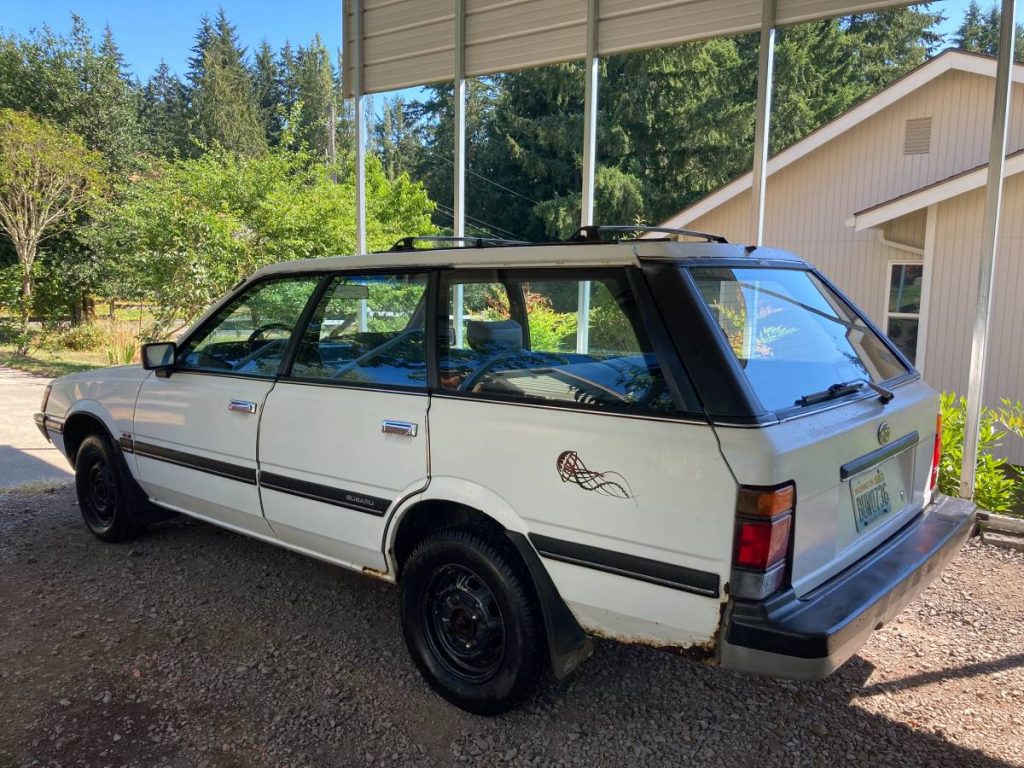 Sadly, this Subaru needs some help before it’s really roadworthy. It runs and drives, but has 3 studded tires and a spare on it (really?), the turn signals don’t work and the seller has just been using hand signals instead of replacing what I’m sure is a burned-out relay (c’mon, man), and it has an exhaust leak that the seller hasn’t fixed because he thinks it sounds cool (oh good grief). Basically, it sounds like what this car needs more than anything is an owner who knows what the hell they’re doing, and cares. 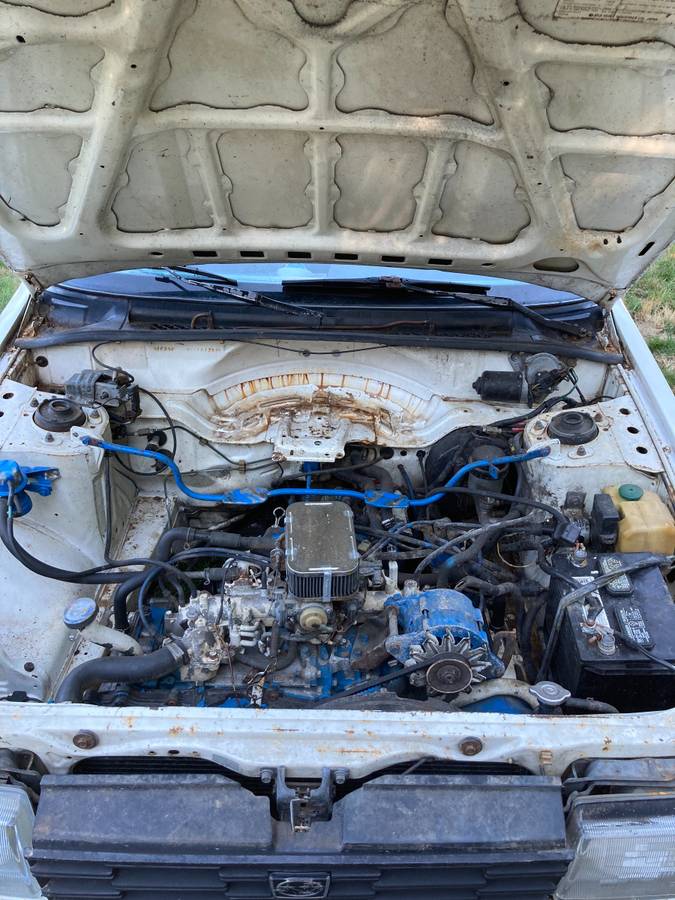 The engine is fed through a Weber carb (presumably some sort of DGV downdraft 2 barrel) in place of the stock Hitachi carb. I don’t know what this change is supposed to gain (performance? reliability? ease of maintenance?), but the seller says it runs well. Shame about all the silly blue paint under the hood, though. 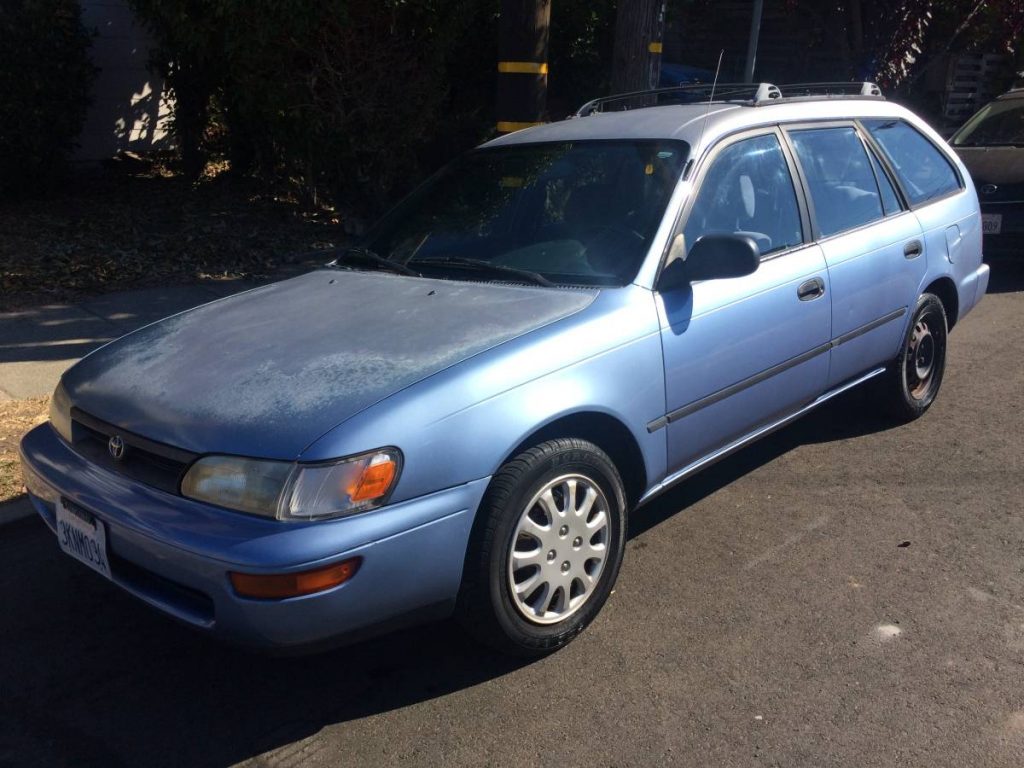 Now, this car I know well. This is the wagon version of the car I’ve been driving daily for the past two and a half years. As such, I can tell you a few things about it right off the top: it has good strong air conditioning and heat that will freeze or cook you right out of the car as required, it’s highly tolerant of neglect and borderline abuse, and it has a good 100,000 miles left in it at the very least. 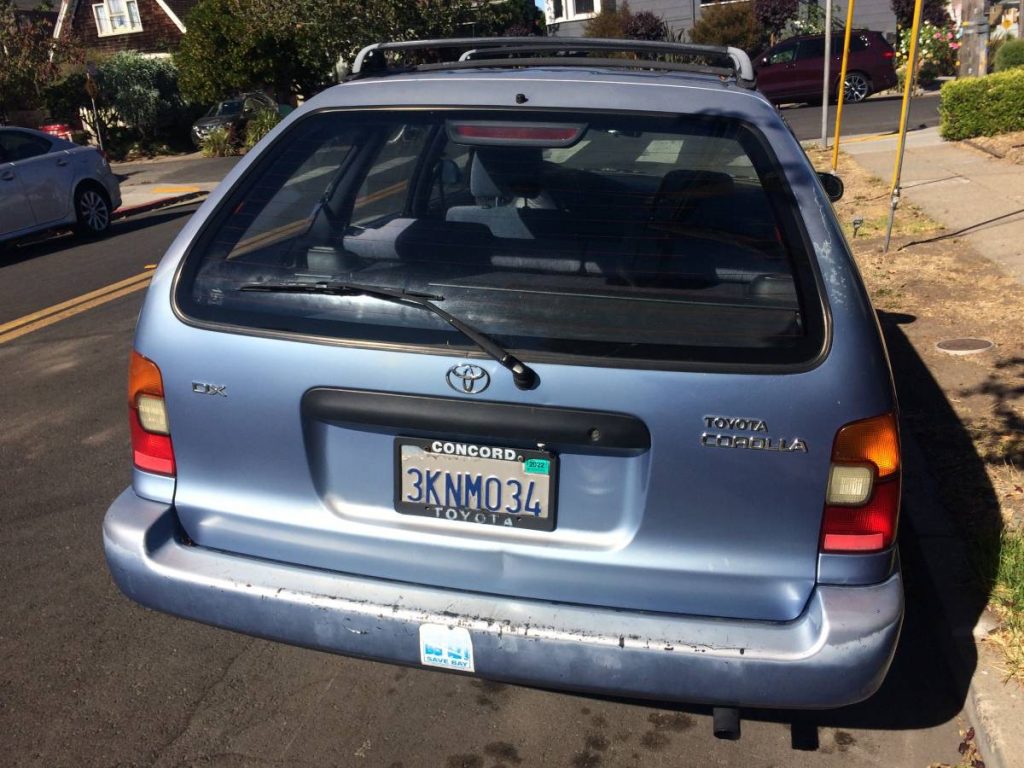 I can also tell you that the driving experience is a lot like the appetizer combo platter at Applebee’s: it’s fine, there’s nothing wrong with it, but you won’t find any unexpected delights or lasting satisfaction. But you will get the exact same reaction from every control, every time, day in and year out, with no surprises. The twin-cam 7A-FE engine in this one is actually 200 CCs bigger than the 4A-FE in my Corolla, yet puts out the same 105 horsepower. It isn’t fast, but it never feels underpowered either. It’s… just fine. Like the rest of the car. And this is before Toyota started softening the ride of their small cars for comfort, so it still handles pretty well. It’s uninspired, but it doesn’t wallow around like the springs are made of jelly. 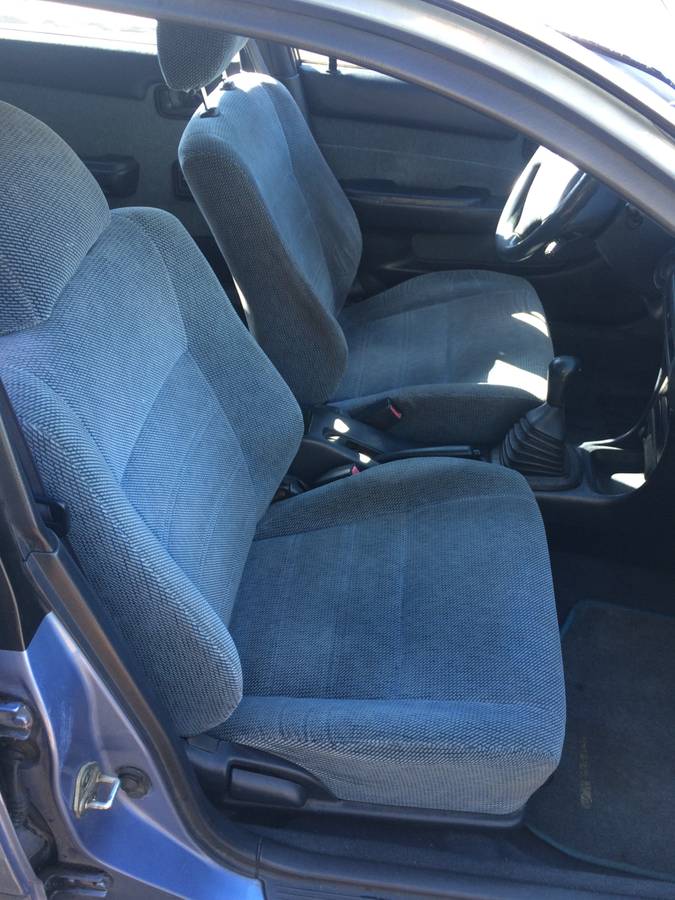 Inside, this one is quite a lot nicer and in better shape than my not-even-a-DX base model. I bet it even has such opulent features as a tachometer and intermittent wipers! It’s squeaky-clean inside too, which says something. I can’t stand it when sellers don’t at least empty the trash and vacuum a car before putting it up for sale. Outside, things aren’t as fresh: the clearcoat has a nasty case of eczema (as does mine) and two hubcaps are missing (which is two more than I have). I don’t see any serious dings or wrinkles, but it looks like the left front fender may have been replaced; it’s a slightly different shade of blue from the rest of the car. 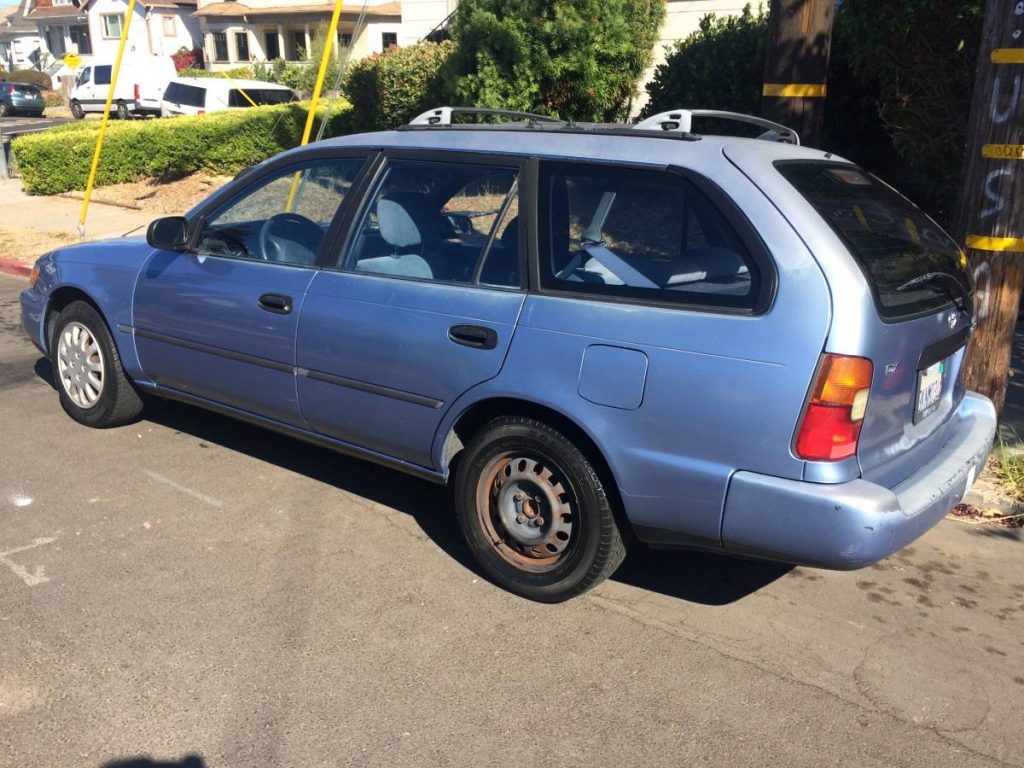 This would be a smart used car purchase if you need something small and economical that still has some decent cargo room. It is not an exciting car. But as I have said in the past, boring cars driven to interesting places to do interesting things are way cooler than exciting cars that only travel the same routes over and over.

So there they are, a couple of Japanese stickshift wagons. One needs some love and attention, and the other is ready to be used hard and ignored. Which one will it be?

Pacific Northwest-based self-taught DIYer of all the things. Current fleet: 1971 MGB GT, 1989 Chevy K1500, 2013 Chrysler 300C, 2003 Infiniti QX4, and 1966 Aristocrat Land Commander trailer. Not to mention about 40 RC cars and around 100 model kits...
Read All My Posts »
PrevPreviousCold Start: A Review Of One Of These Is Coming
NextThe Average New Car Transaction Price Is Reportedly Expected To Hit A New Record High This MonthNext