Good morning! Today is a special day in the history of this silly little column. This is my 100th Shitbox Showdown! Thomas kicked things off on April 4th, and I took over on the 5th, so this is technically Shitbox Showdown number 101, but it’s 100 for me. To celebrate, I’m setting aside the price cap to look at two cars on my own personal “always wanted one” list.

So let’s get yesterday’s results out of the way, and we’ll take a look:

Brave souls, I think. But that Benz does warrant a look, just to see if it really is legit. Besides, the Datsun already sold, so it’s out of the running.

Now, I’m sure I’m not alone in having a list of reasonably-priced cars that I’ve always wanted to own, but haven’t (yet) had the chance. And I’m sure mine isn’t the only list that changes with my mood. But there are some constants: a Fiat 128, a Dodge Shelby Charger, an early Mazda RX-7, a Chevy El Camino, any old 5-cylinder Audi Quattro… and these two. They’re not cheap by our usual standards, but they’re not totally out of reach either. Something to aim for, I think, because you have to have goals. Here they are. 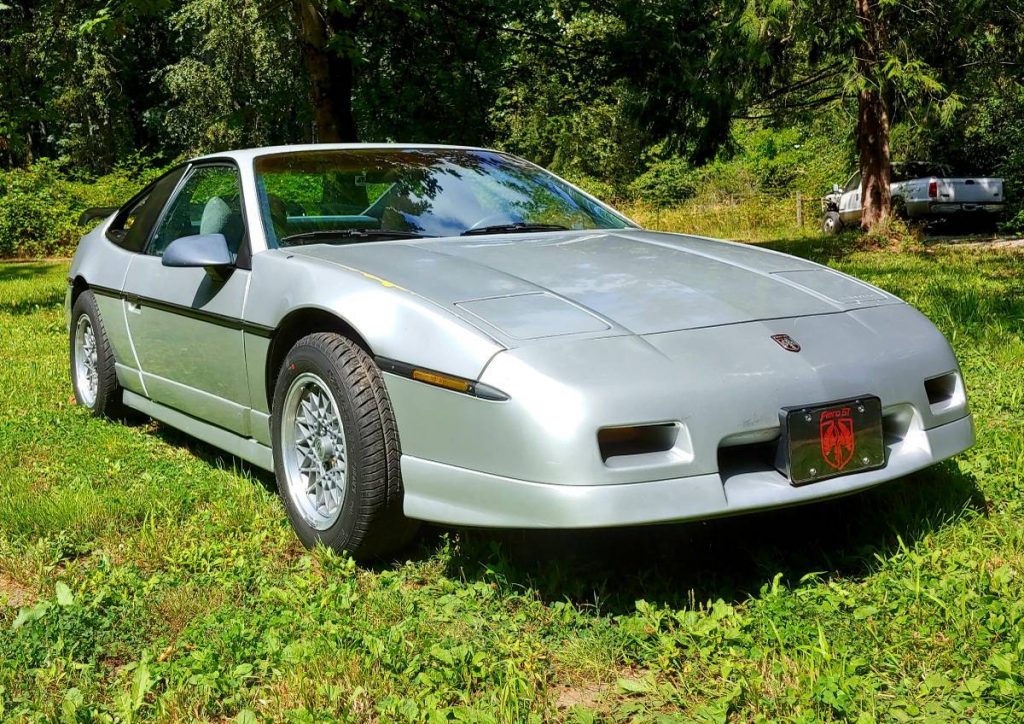 I’ve always felt sorry for the Pontiac Fiero. It started out as a half-baked idea, ended up five years later as a halfway-decent sports car, and then was unceremoniously scrapped. Good old GM, ruining a good thing just when they finally got it right. It was the Corvair all over again. But at least the Fiero actually saw production: Pontiac’s previous attempt at a two-seat sports car, the XP-833 (which was to be called the Banshee had it been produced) was killed off by GM’s brass before it ever saw the light of day. The XP-833’s sin was outshining Chevy’s Corvette, which had to maintain its place as GM’s performance halo car. The Fiero was sold to management as an economy car that just happened to be a mid-engined two-seater. Verrrrry sneaky.

Of course, it wasn’t much of a sports car to begin with, more of a half-assed collection of parts from other GM cars under a flashy plastic body. Half-assed engineering begat fires, fires begat recalls, and Fiero sales tanked. But nobody told the Fiero project engineers; they went on making improvements right up until the bitter end. This 1988 Fiero GT has an all-new suspension design and some improvements to the corporate V6 engine that finally made its performance match its looks. Sadly, it was too little too late, and Pontiac pulled the plug. 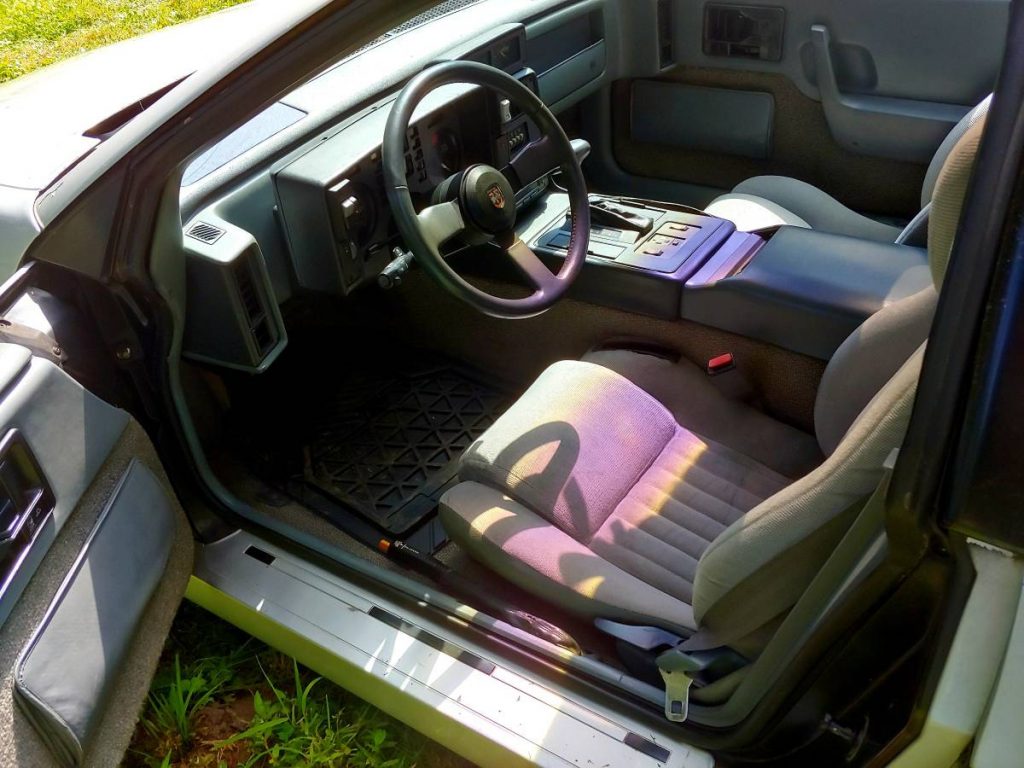 That makes this Fiero the one to get, if you want one. And because it’s no secret that this is the “good” Fiero, values for ’88 Fiero GTs are higher than the earlier versions. This one is an automatic, which will turn off a lot of you I’m sure, but I’d be fine with it, honestly. For some reason, GM sporty cars get a pass from me on the three-pedal rule. Fieros, Corvettes, Camaros, and Firebirds are all cool with a stick, but they’re fine with an automatic too. 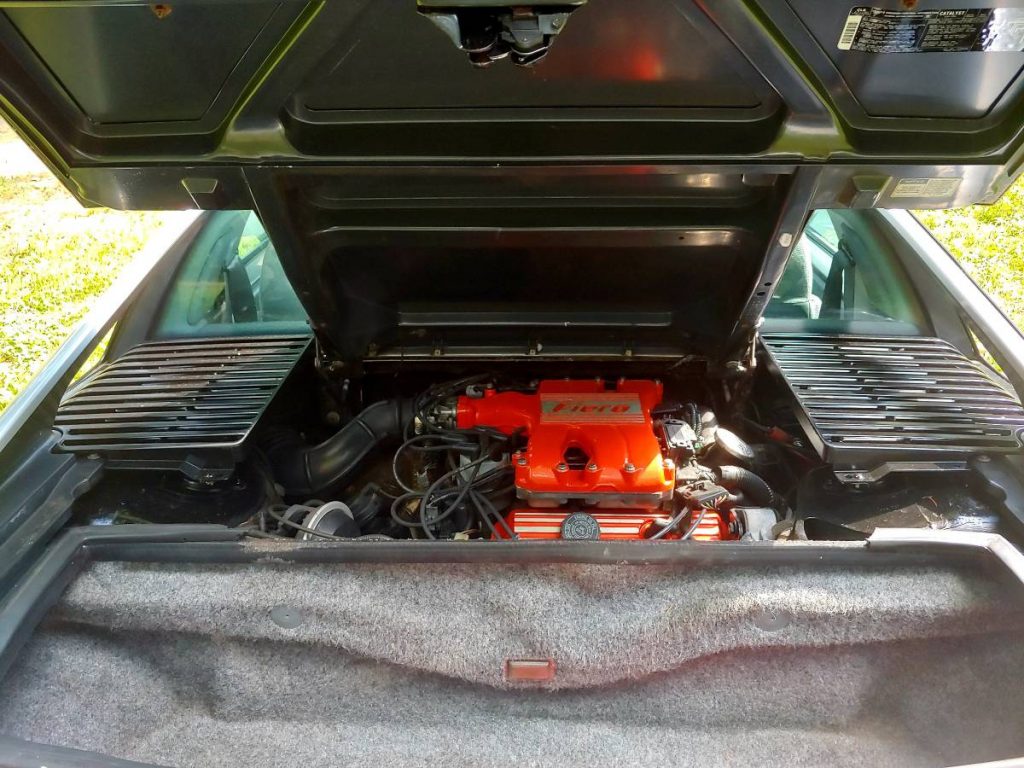 We don’t have a lot of facts to go on from the ad; it says “call for details.” Usually this means the seller is older and not internet-savvy. So, if you want details, call. But the facts that are there are encouraging: low miles, lots of work done, no obvious flaws. It’s a nice car, and although it’s more than I can spend, it’s not more than I would be willing to spend for a good Fiero experience. 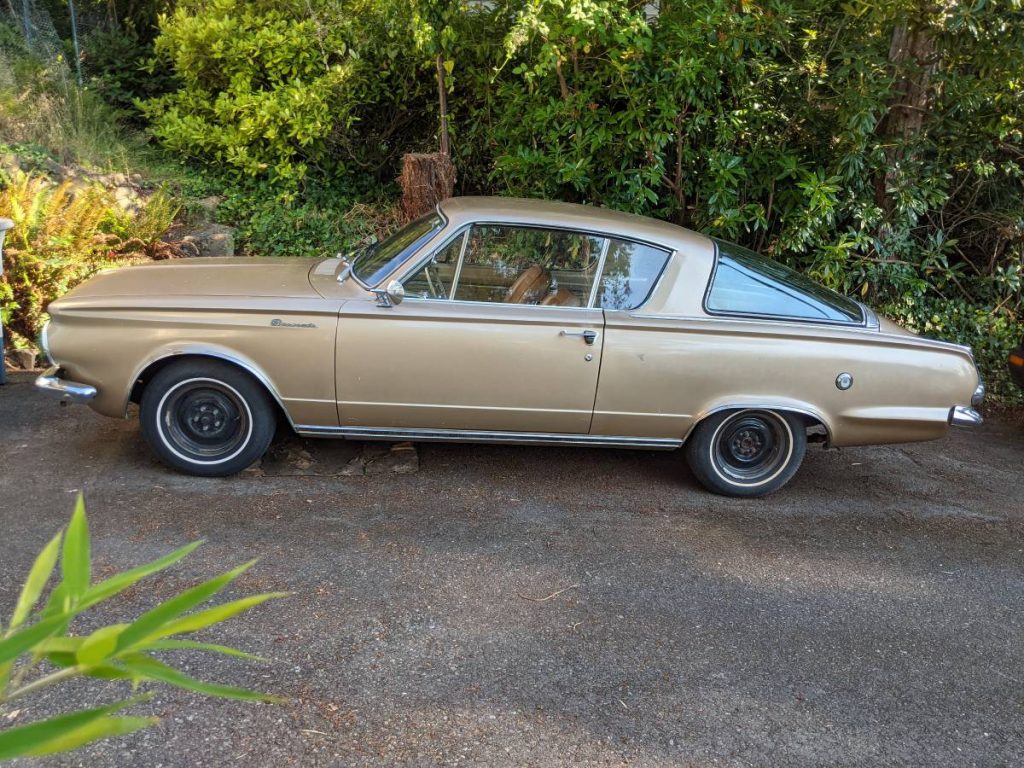 The Plymouth Valiant Barracuda (as it was known in its first year) shares a birthday with this very website: March 32nd–I mean, April 1st–of 1964. Mopar fans love to point out that this was two weeks before Ford introduced the Mustang, making the ‘Cuda the first “pony car.” But of course, the term “pony car” was coined for the Mustang, and while the Mustang shared a platform with the Ford Falcon economy car, the Barracuda shared a name and three-fourths of its sheetmetal with the Plymouth Valiant. In 1965, when this car was built, the Barracuda became a standalone model, but retained its Valiant looks. 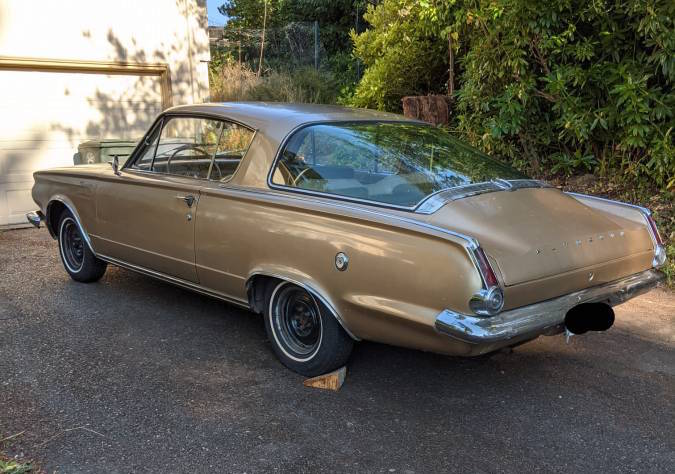 I have always loved the styling of the first-generation Barracuda. The second-generation is even prettier, with its split grille and Coke-bottle curves, but something about the long glass fastback of this car speaks to me. I had a neighbor with a gorgeous 1965 Barracuda Formula S that I really admired; that car also features in one of the funniest anecdotes from my ill-fated college career. 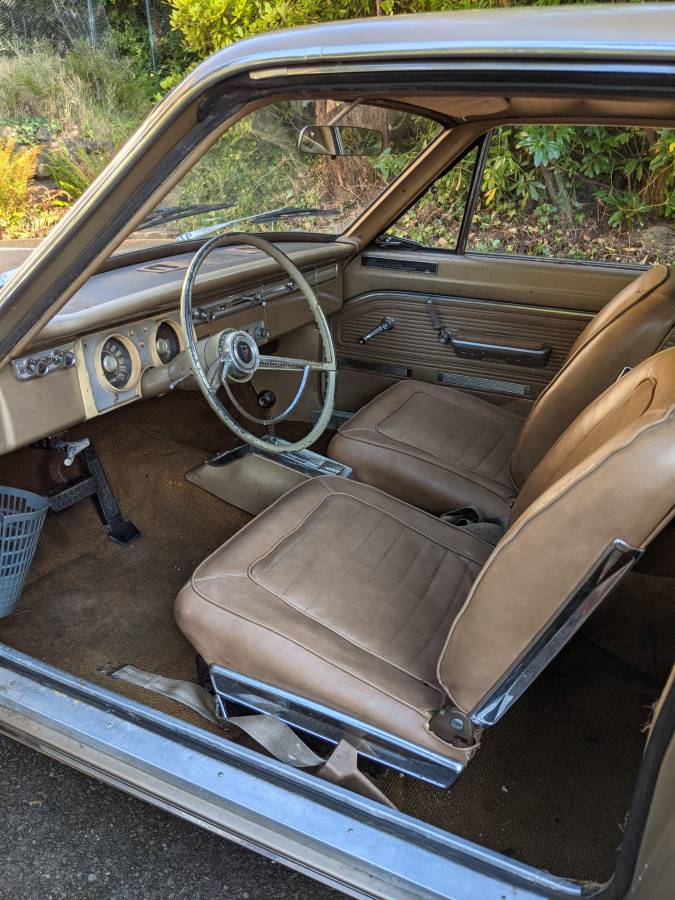 This Barracuda isn’t a Formula S, but it is, as that one was, a one-owner car. Fifty-seven years and 228,000 miles, all with the same name on the title. How often do you see that? It looks like it has been remarkably well-kept, and according to the seller (who I suspect is not the owner, but rather their next-of kin) it runs and drives well. It’s powered by the legendary Chrysler slant six, here in 225 cubic-inch “Super Six” form, backed by a floor-shifted Torqueflite automatic. Not exactly the stuff of muscle-car dreams as some Barracudas are, but it’s plenty for someone like me who honestly doesn’t give a damn about horsepower. 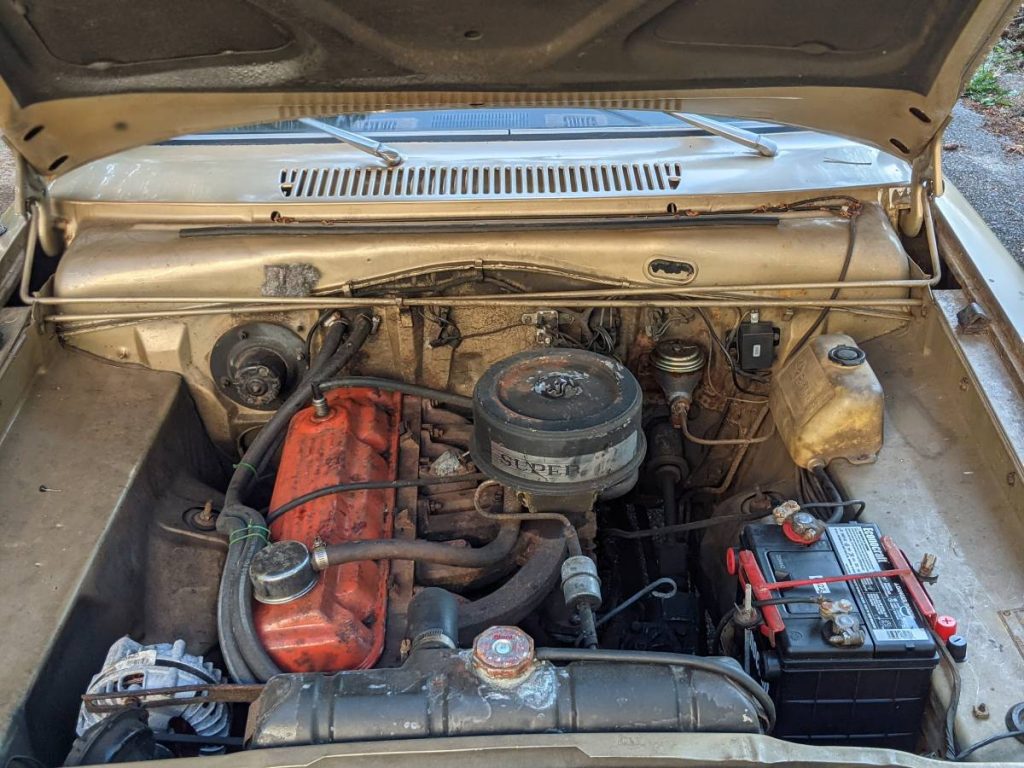 It’s “honestly dirty” under the hood, with a smattering of new parts and no obvious bodges or red flags. The interior looks nice, just old, and the gold paint shines nicely, and I’m sure it’s original. There is a little rust, and a few dings and scrapes, but those are just character marks from a life well-lived. I really like this car. It’s just about exactly what I would want if I were shopping for an old Barracuda. I would be tempted to add some Cragar mags to it, just for a little style, but otherwise I’d leave it just as it is.

And that’s that! I want to thank you all for going along on this ride with me every day; I’m still having fun and I hope you all are too. And thanks again to David and Jason for letting me babble about old crappy cars every day. Let’s just keep it rolling, shall we? Cast your vote for your favorite, and just to keep the conversation going, feel free to list your “always wanted one” cars in the comments. Thanks for reading!

Pacific Northwest-based self-taught DIYer of all the things. Current fleet: 1971 MGB GT, 1989 Chevy K1500, 2013 Chrysler 300C, 2003 Infiniti QX4, and 1966 Aristocrat Land Commander trailer. Not to mention about 40 RC cars and around 100 model kits...
Read All My Posts »
PrevPreviousCold Start: Remember The Kia Lotus? I Saw The Forgotten Prototype At A Party In Germany
NextThe Autopian Podcast Is Now On Apple Podcasts; Listen To Two New Episodes!Next