Last fall I bought a 1965 Plymouth Valiant. Equipped with the Chrysler Slant Six “Leaning Tower of Power” mated to a three-speed column-shift manual — and devoid of luxuries like power steering, power brakes, power windows, or power locks — the old car had all the right ingredients to be a stout, unkillable machine. And, aside from some small issues here and there, it really was. Somehow my 1965 Plymouth Valiant — which I just sold — ended up being the best “winter beater” I have ever owned; here’s why.

I’ll admit that I bought the Valiant on impulse. I’d just driven from LA to New York, and didn’t feel like flying back to Michigan. So I searched for a car, with my criteria revolving around simplicity. When I spotted a 1965 Plymouth Valiant with a stick (on the column) and one of the toughest engines in automotive history, I knew it was the one.

What I didn’t know was that the $2,000 four-door sedan would actually live up to — hell, exceed — its bulletproof reputation. After I poured in some clean fluids and slapped on some used winter tires, the machine got me 650 miles back to Michigan without any major issues. 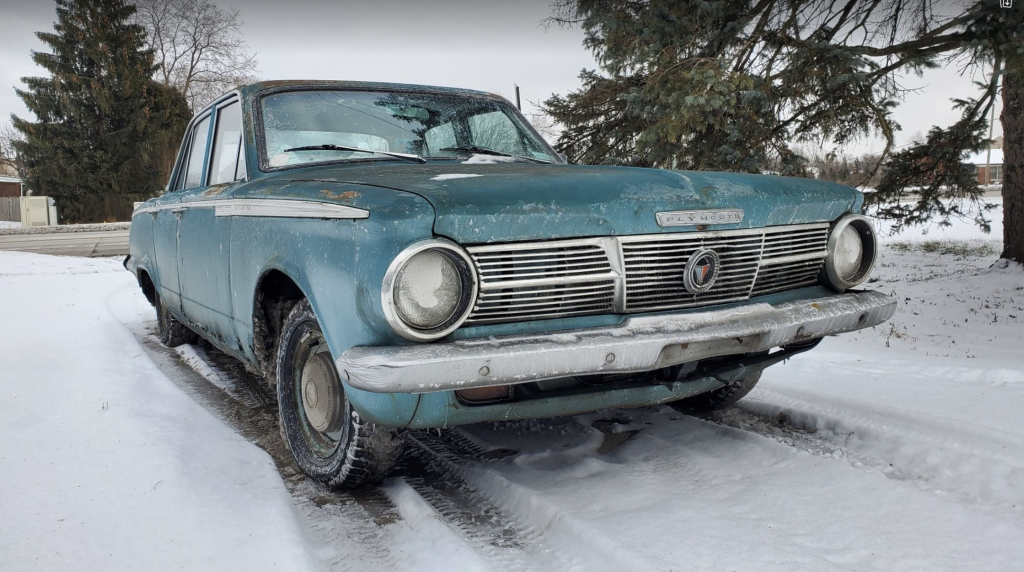 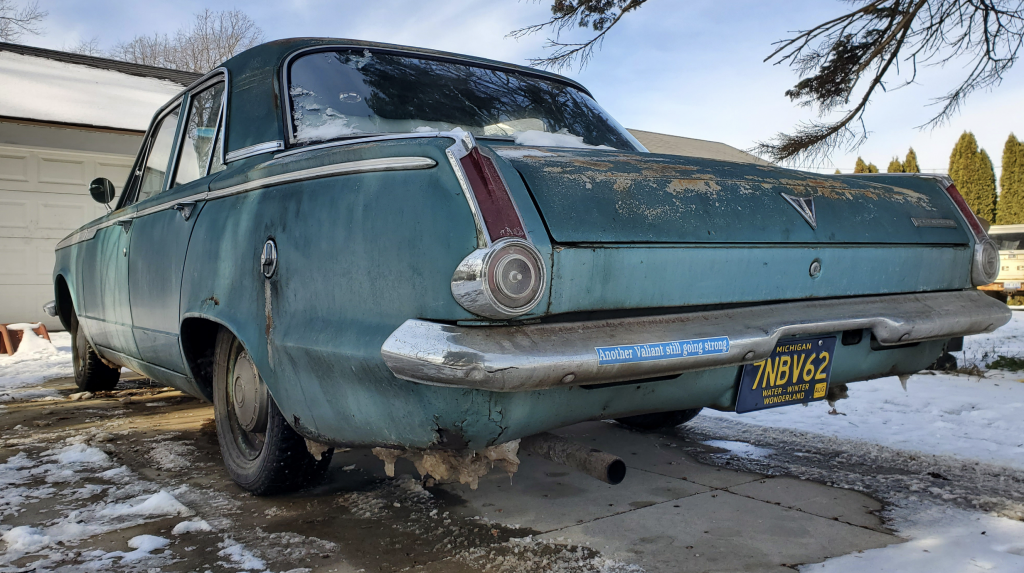 And that’s really how things stayed. The 170 cubic-inch (2.8-liter) slant-six motor fired up even on the coldest of Michigan winter mornings. I had to keep my foot on the gas for about five seconds to fill the bowl or it would cut out, but other than that, the thing ran reliably, and took me to my errands day in and day out. I literally drove it everyday between late November and early April. 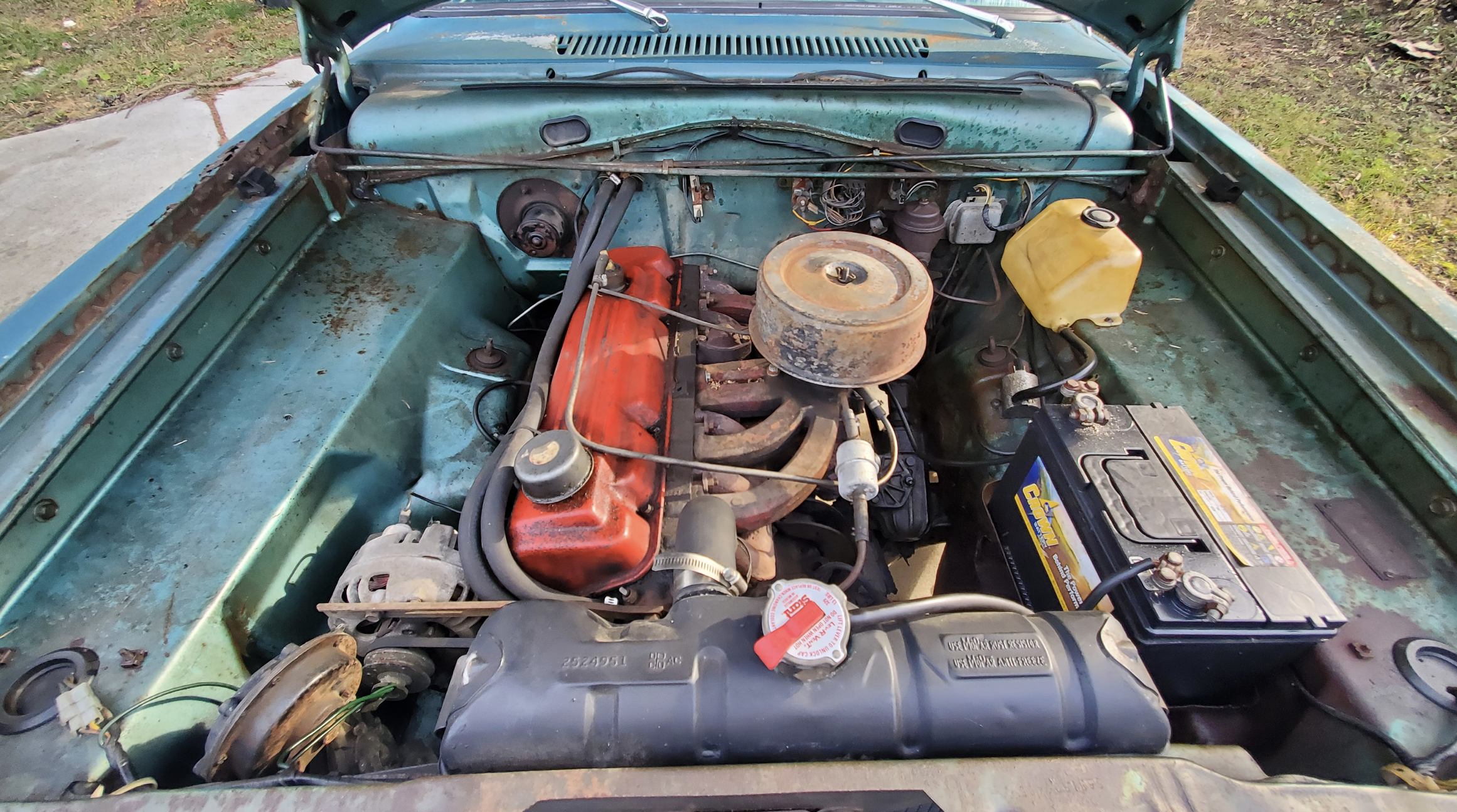 Hell, I even ripped some epic donuts in the snow:

There was tons of space in the trunk for car parts (I carried multiple tires and a set of leaf springs back there), the ride was downright comfortable, 65 mph on the highway was no problem, and fuel economy was — well, roughly the same as my Jeeps: 18 MPG highway. 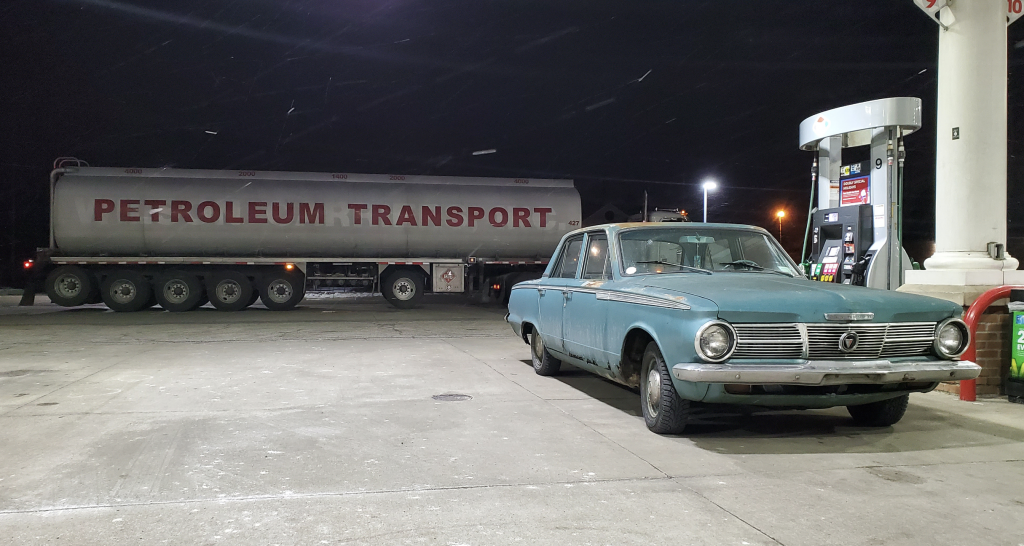 Okay so fuel economy and acceleration weren’t ideal, but that’s not what winter beaters are for: Winter beaters are all about reliability and heater performance; the last thing you want to do is have to work on your car in minus 20 degree weather, and of course you want your heater to work.

And that Valiant’s heater cranked. In fact, a strong argument can be made that the Slant Six engine is really more of a heater that just happens to be able to propel a car than it is a prime mover that produces heat as a byproduct. It’s not efficient, and that meant a toasty cabin within just a few minutes of startup. 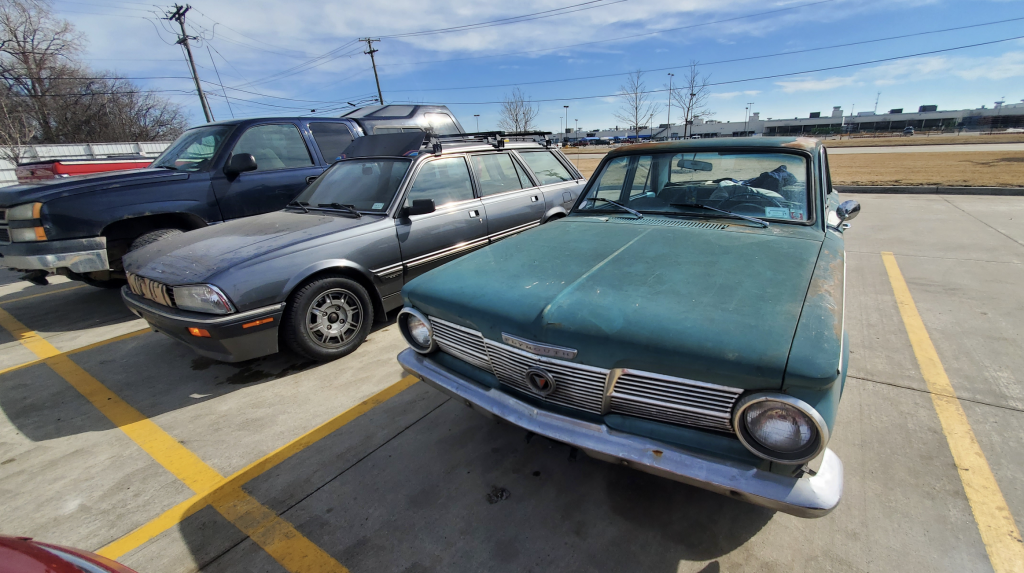 In the snow, those thin, studded snow tires were absolute beasts, slicing through the fluff with ease, with those rear tires — weighed down by the car parts I had in the trunk — pushing the car confidently down the road. 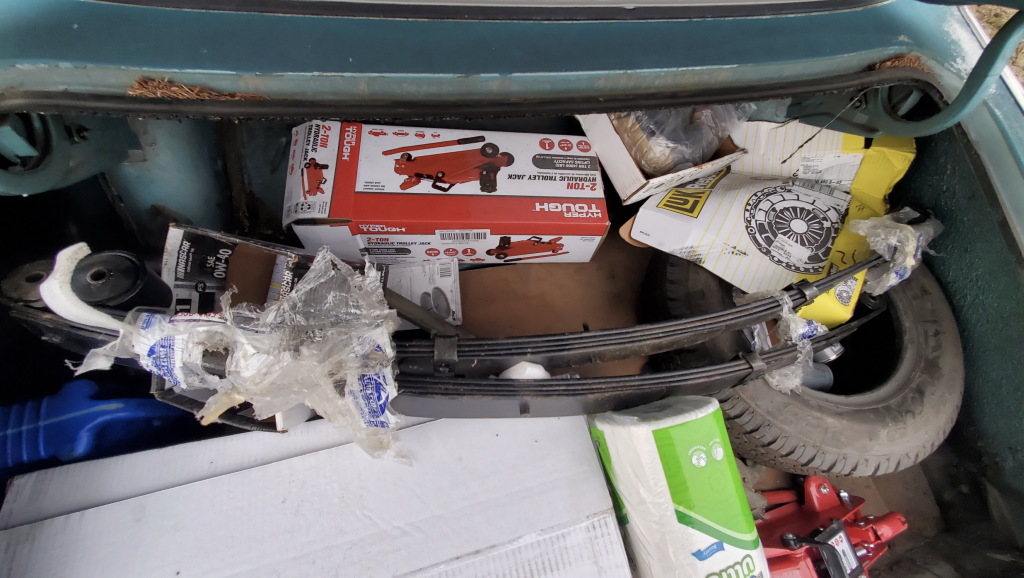 I expected this car to be a pain in the ass given its age and low cost, but it was totally fine. The huge steering wheel and short gearing in the steering box meant taking turns without power assist — even at low speeds — wasn’t really that hard. The manual brakes, too, weren’t that bad at slowing the 2,600 pound car down. The ride was soft, the bench seat was cushy, and the radio cranked Alan Jackson whenever I needed it to.

I took this old sedan to my dry cleaner, I took it to my junkyard to haul parts, I took it to restaurants, I took it to official meetings, I took it to parties, I even took it 70 mph on road trips — the Valiant got me everywhere I needed to go without issue and in comfort. Was there a part of me that realized that a good percentage of cars on the road could turn my tiny Valiant into a sheet of tin foil with just a light tap of my rear bumper? Absolutely, but I tried to ignore that thought: 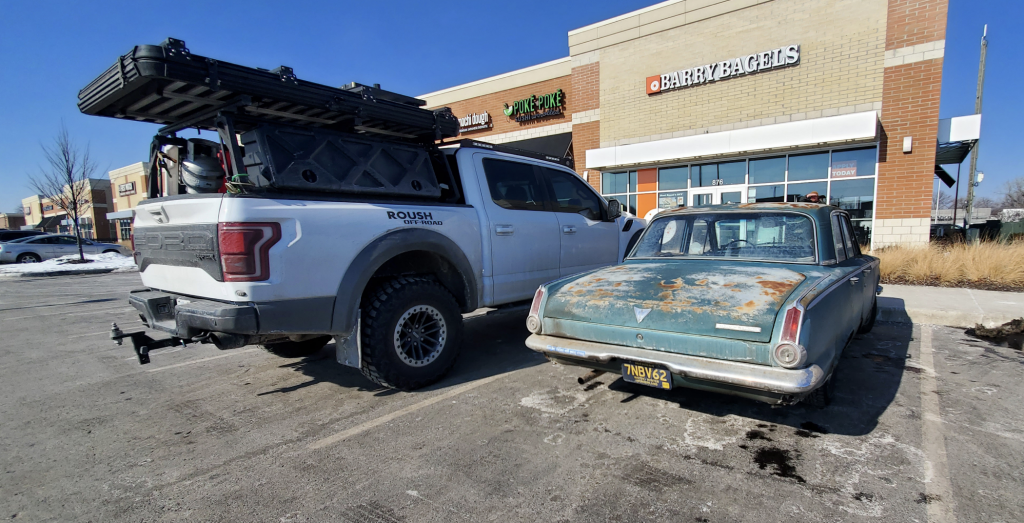 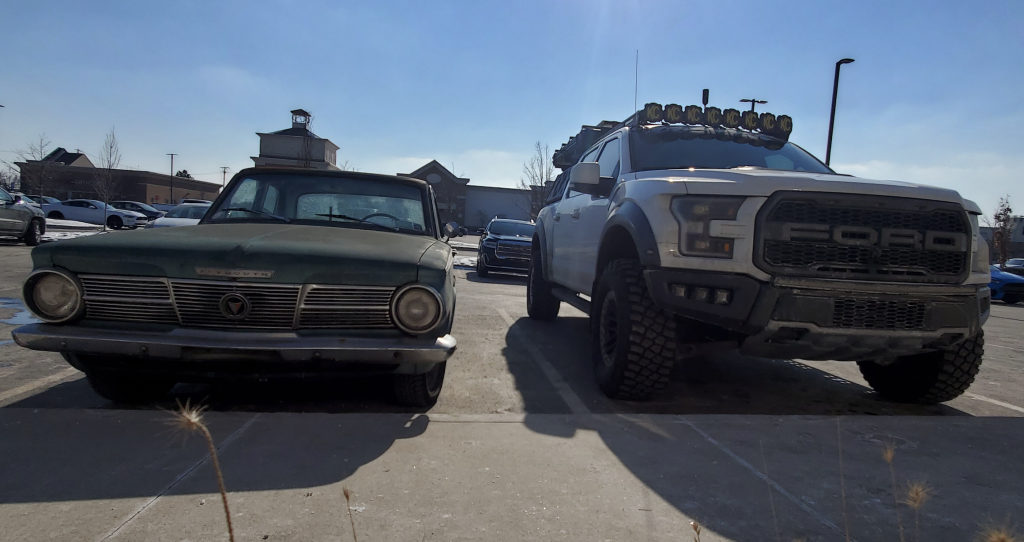 I’ll admit that the Valiant wasn’t perfect. On one occasion, it did leave me stranded when the clutch Z-bar (basically a metal bar that translates your clutch pedal input into motion that releases the clutch) failed at one of its welds. 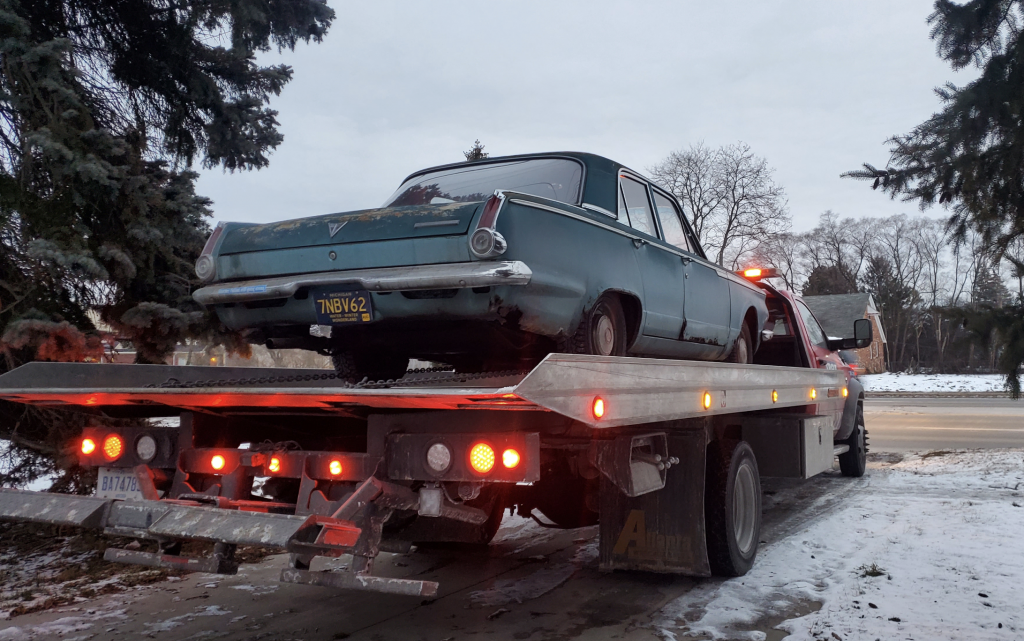 Here’s the look at the failure: 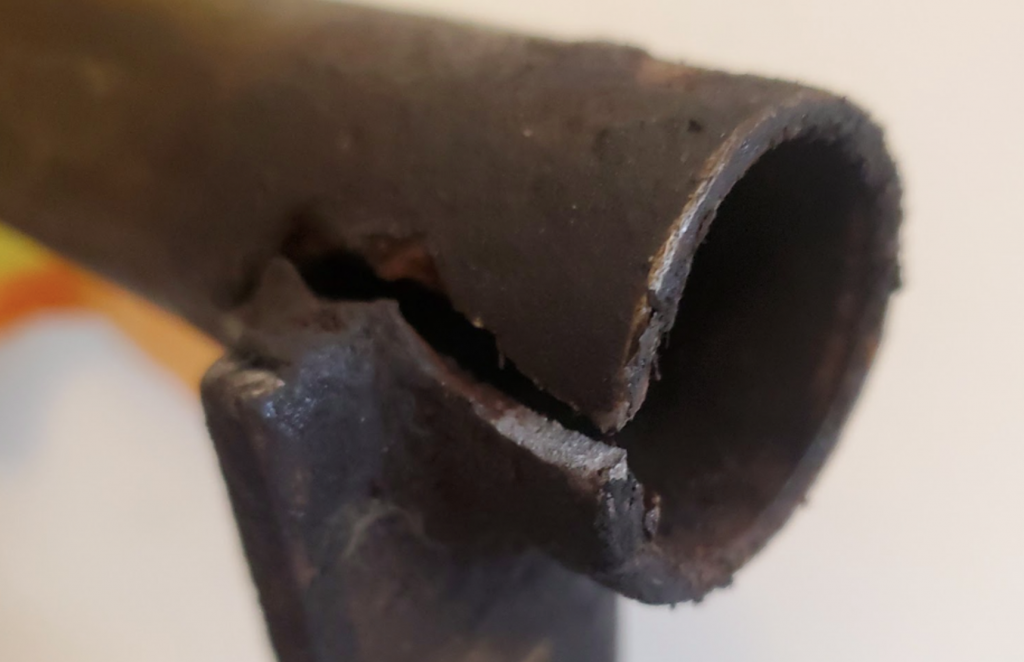 A friend of mine welded that up, and I was back in business. I did also have a ballast resistor failure that prevented the car from starting. But, as I’d read about this part’s propensity to fail, I had a spare in the glovebox: 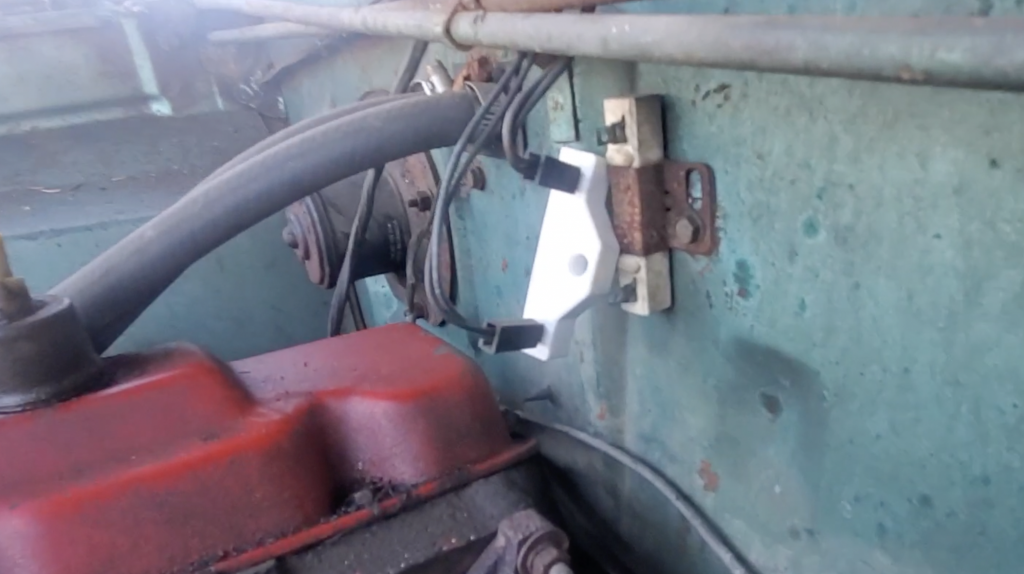 My starter motor also gave up the ghost, but the local car parts store had one in stock; that was just two bolts and a couple of wire connections — truly the easiest starter motor change of my life: 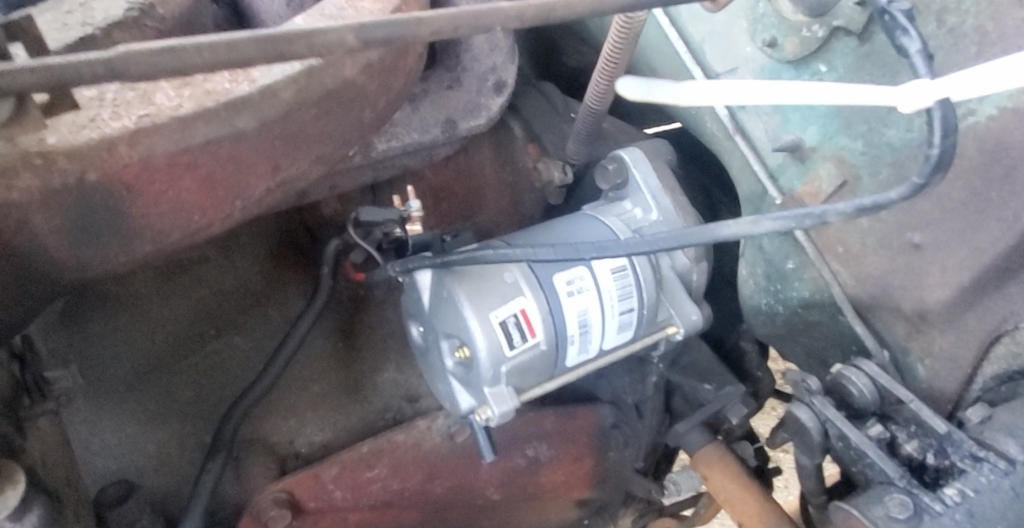 Really, that broken clutch rod was the biggest failure I had; the starter and ballast resistor took a combined 30 minutes and $75 to change, maybe. 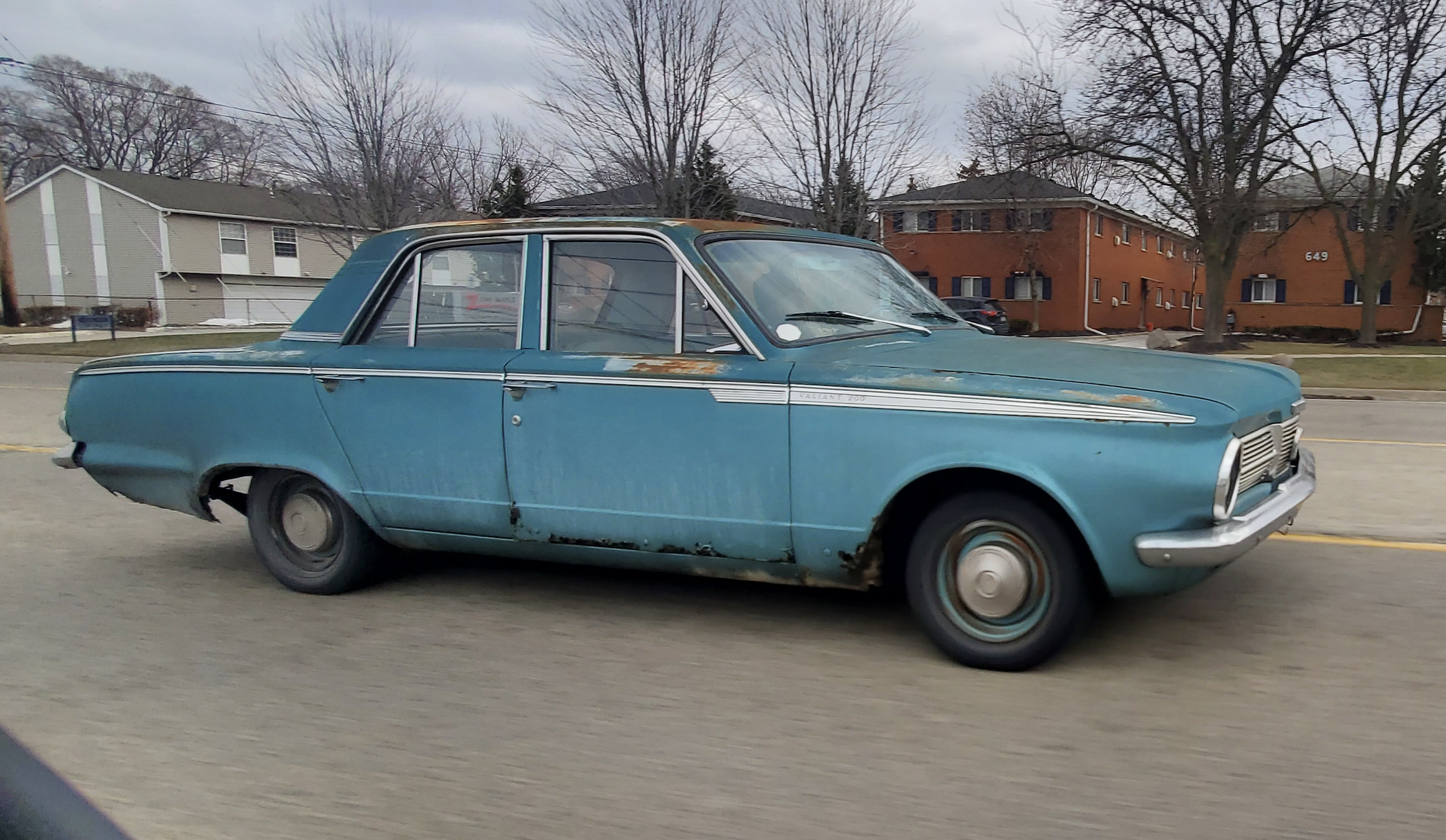 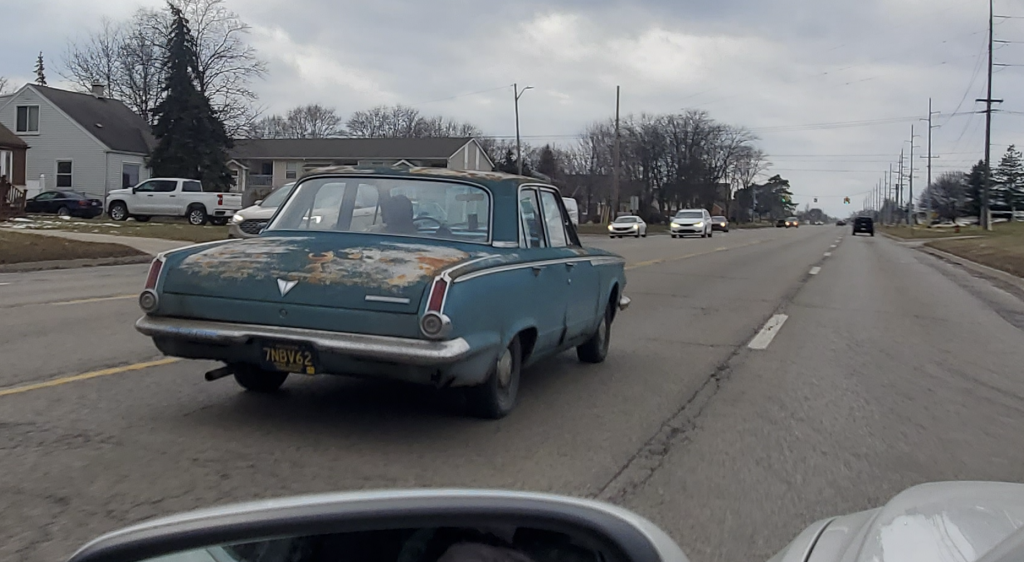 I guess I should also mention that my shift linkage tended to leave the transmission stuck in first gear unless I slid under the car (to do this, I’d have to drive up onto a curb) and yanked the linkage by hand. This was a massive pain in the ass, as driving down the road, downshifting, and then realizing that you can’t get out of first can leave you in some precarious situations.

Yeah, I guess that shifter linkage issue was the biggest drawback to owning the Valiant, really. All of that time and use had worn those parts down to where they’d just jam up, and I’d have to slide under the car and get greasy at times that I really didn’t want to. 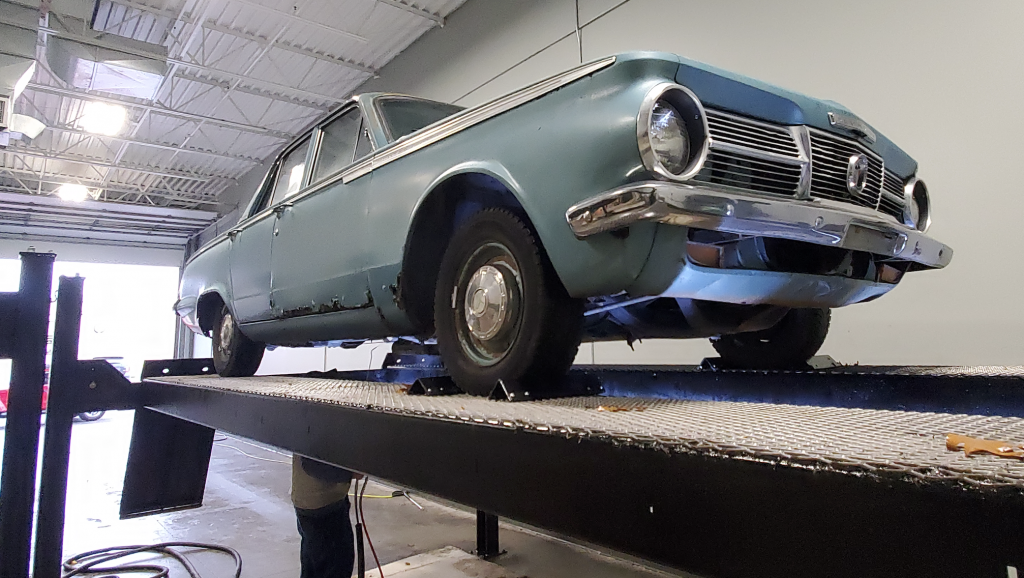 You may recall that I got the vehicle undercoated prior to the winter. I can’t tell you that this was a huge help, but I will say that the vehicle looked no worse at the end of the winter than it did at the beginning, though who knows what would have happened this summer when the sweet catalyst of heat got ahold of that old iron. 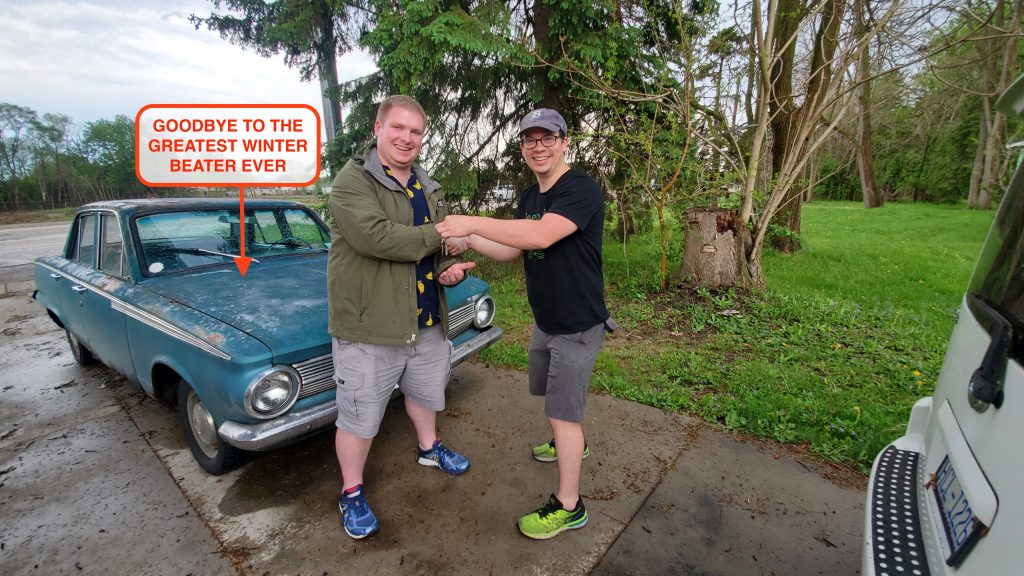 A few weeks ago, I sold the old machine to a young man named Chris for $3,200. It was his first time driving a column-shift car, but he figured it out quickly, and enjoyed driving the 1965 cruising-machine. I have no doubt that it will continue to live up to its name for years to come. 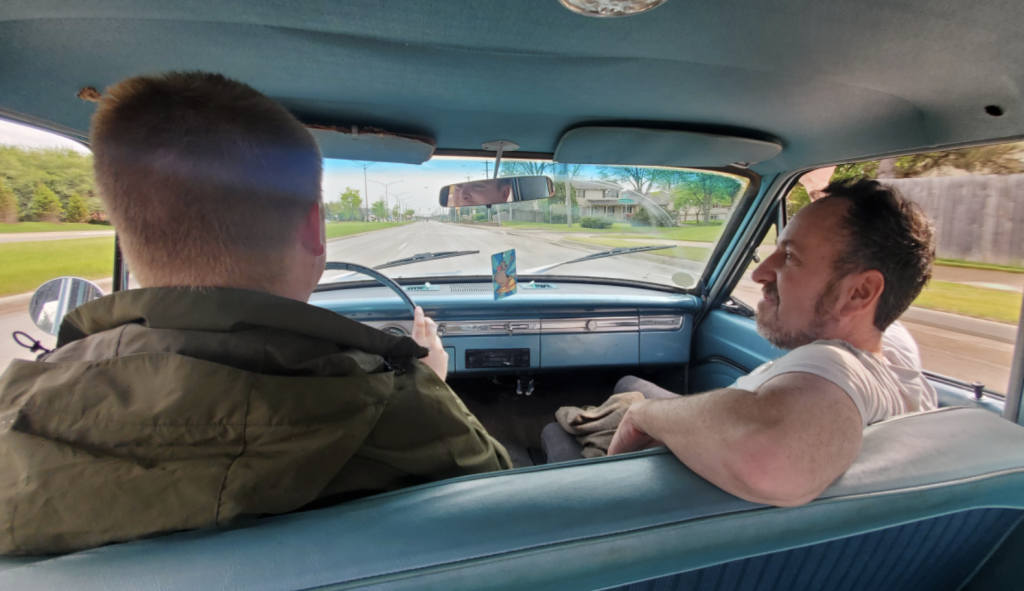 Though I will miss it, I’m headed to Australia in September to drive another Valiant, except this one will be a ute. If it’s half the car in the heat that ol’ Blue was in the cold, I’ll be the happiest man in the Outback.

Rust-loving Jeep man, cofounder and EIC of The Autopian, Jason's friend. Email: david@autopian.com
Read All My Posts »
PrevPreviousBad-Idea Bentley, Gambler Eclipse, or Earnest Dodge Van: What’s Your Shitbox Of The Week?
NextJeep Wrangler Gets Tired During IIHS Small-Overlap Crash Testing, Lies Down For A Quick NapNext