Good morning, and welcome to the Two-Door Tuesday edition of Shitbox Showdown! Today, we have a pair of coupes that you don’t see around any more. But first, let’s finish up our name game from yesterday:

Well, that’s the long and the short of it. And for what it’s worth, I agree; I still dig the Mini, but if it’s between this Mini and this Maxima, then for me the name is Nissan. I already have one cantankerous British hatchback to deal with; I don’t need another. (Yes, I know this one is technically German. That doesn’t make it better.)

Today, our choices may have some younger readers scurrying off on a Google search to learn just what the hell they are. Neither of these cars is at all common in the wild, and one of them I would have guessed was extinct by now. Yet here they are, both for sale here in Oregon, the magical land of forgotten cars. Both are automatics, both are rear wheel drive, and both have the best-looking headlight configuration – quad round sealed beams. Let’s have a look at them. 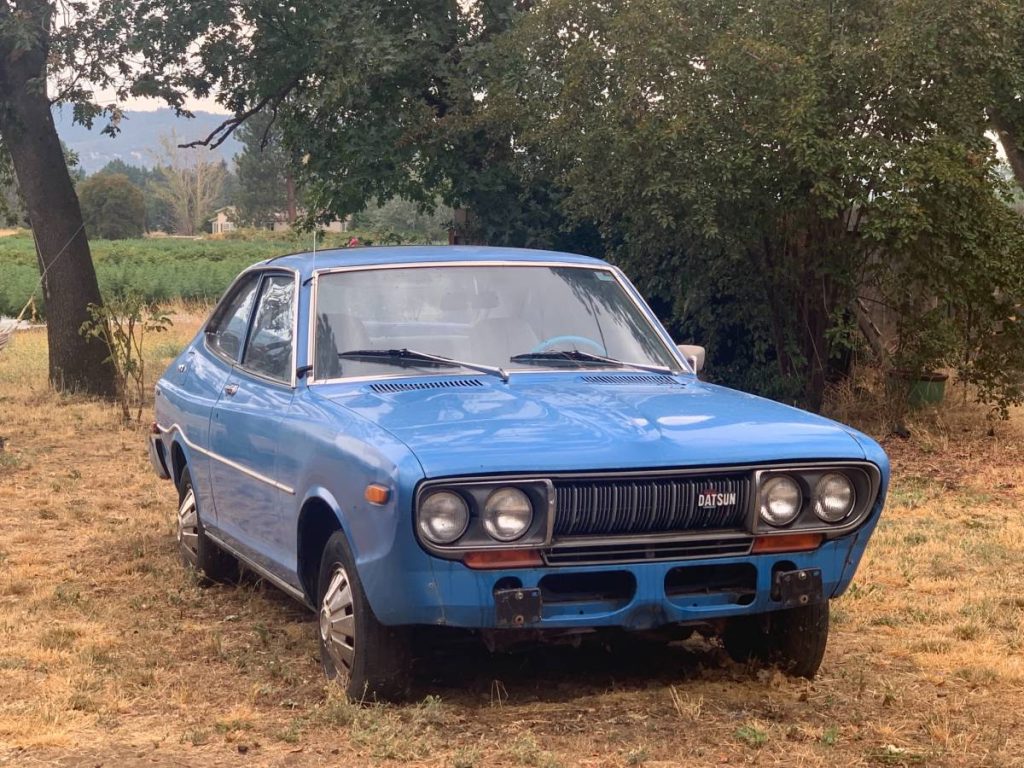 I’ll never understand why Nissan didn’t just use the home-market names for their cars in America. We could have had Sunnys and Bluebirds and Fairladys instead of a bunch of numbers that didn’t really correspond to the different sizes or trim levels of the cars. This car, in Japan, was known as the Nissan Violet. Doesn’t that sound friendlier than “Datsun 710”? 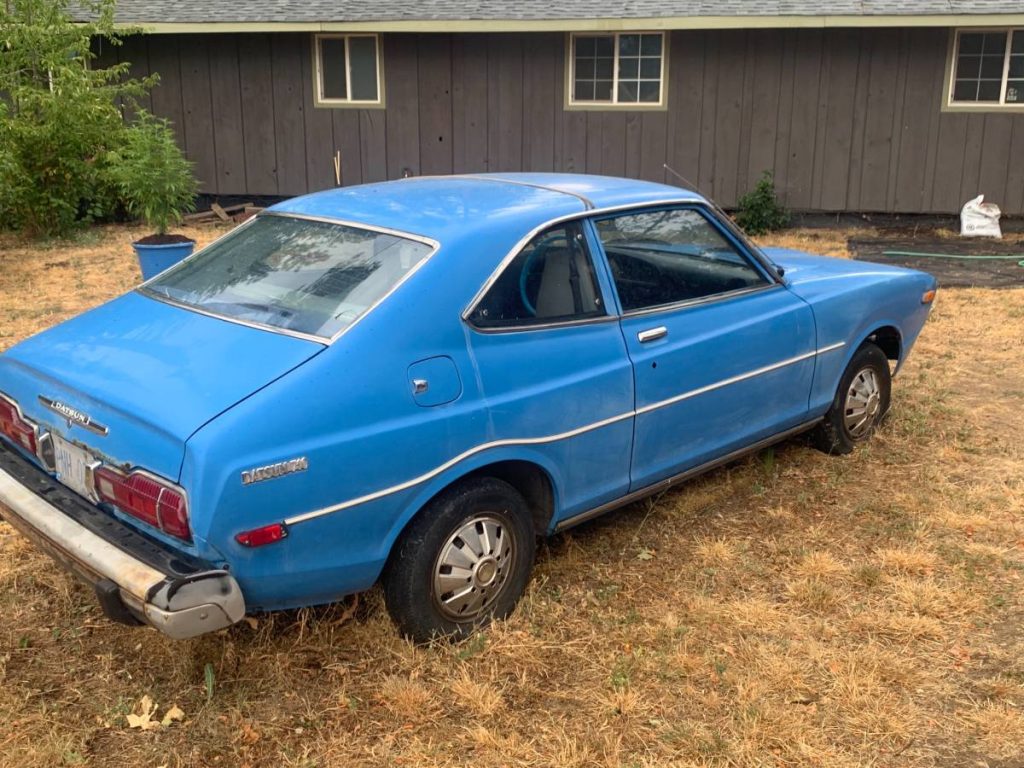 I do like the looks of these old Datsuns, though. Too bad they’ve been lost to time except for a few “greatest hits.” But then, that seems to be the way of things: everybody over-plays “Don’t Stop Believin’,” when the second cut on Journey’s Escape album, “Stone In Love,” is at least as good a song, if not better. Datsun 510s and Z-cars are revered, and the poor 710 and 610, both rear-wheel-drive cars with sharp styling, are resigned to the junkyard of history. 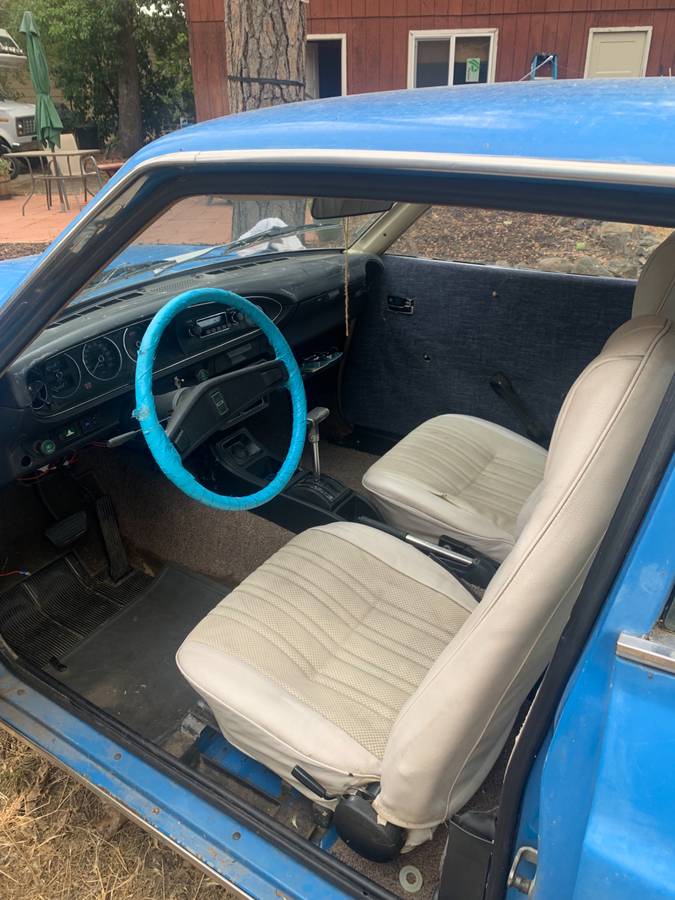 This 710 isn’t exactly a showpiece, but it’s probably one of the nicest ones left. Some bits of the interior are obviously incorrect, and the front bumper is MIA, but this isn’t the sort of car you nut-and-bolt restore back to original anyway. It’s a lightweight rear-wheel-drive shell, a blank slate that you can modify and tweak to your heart’s content. 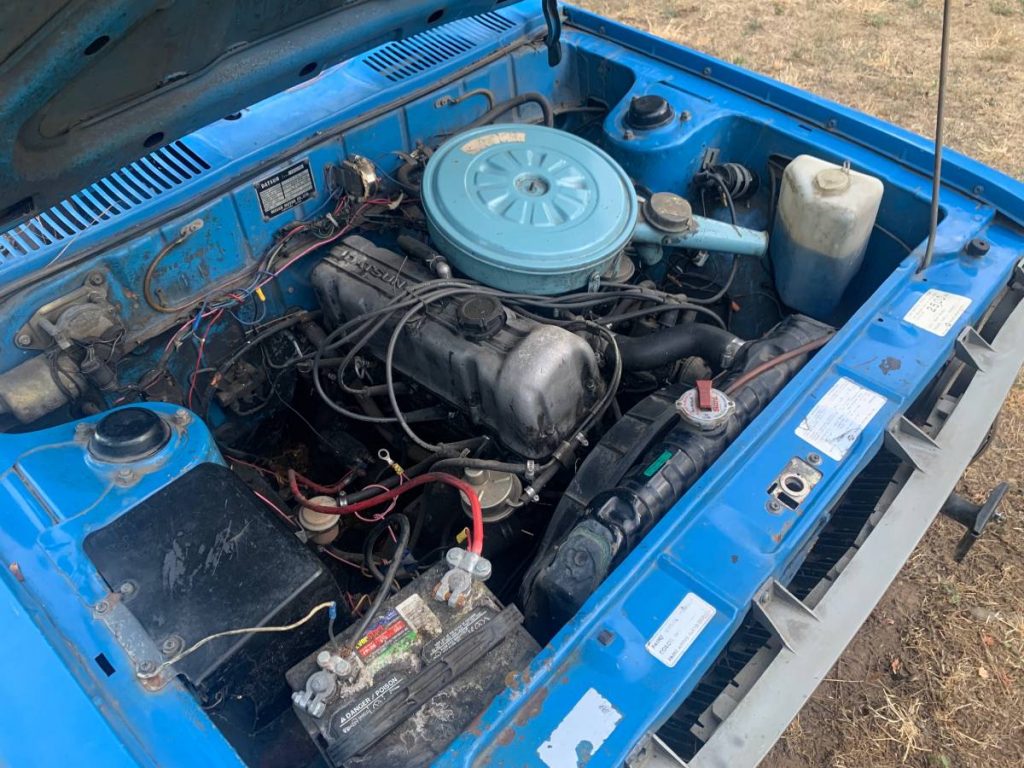 Of course, you could bring the little L18 four-cylinder back to life and just drive it as-is. The engine ran not too long ago, it sounds like, and the paint is still shiny, so it’s not a bad starting point. You’ll still be the talk of Cars & Coffee. But a manual swap would make this little car a lot more fun to drive, and more power couldn’t hurt either, of course. However you do it, it would be a neat car to get back on the road. It’s nice to see a few “deep cuts” like this running around still. 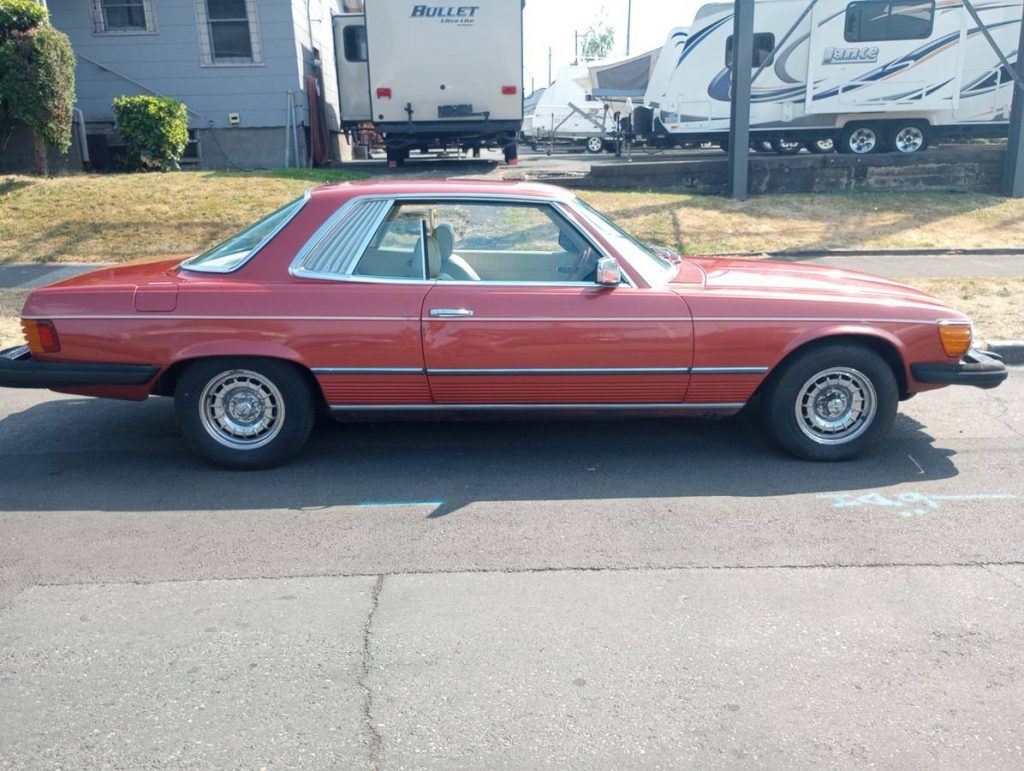 The Mercedes SLC lives in the shadow of its convertible sister model, the SL. The two cars share a platform and drivetrain, but the SLC adds about 14 inches to the wheelbase, a back seat fit for actual passengers, and a sleek pillarless hardtop roofline. It also commands far less attention and a much smaller price tag than the SL. 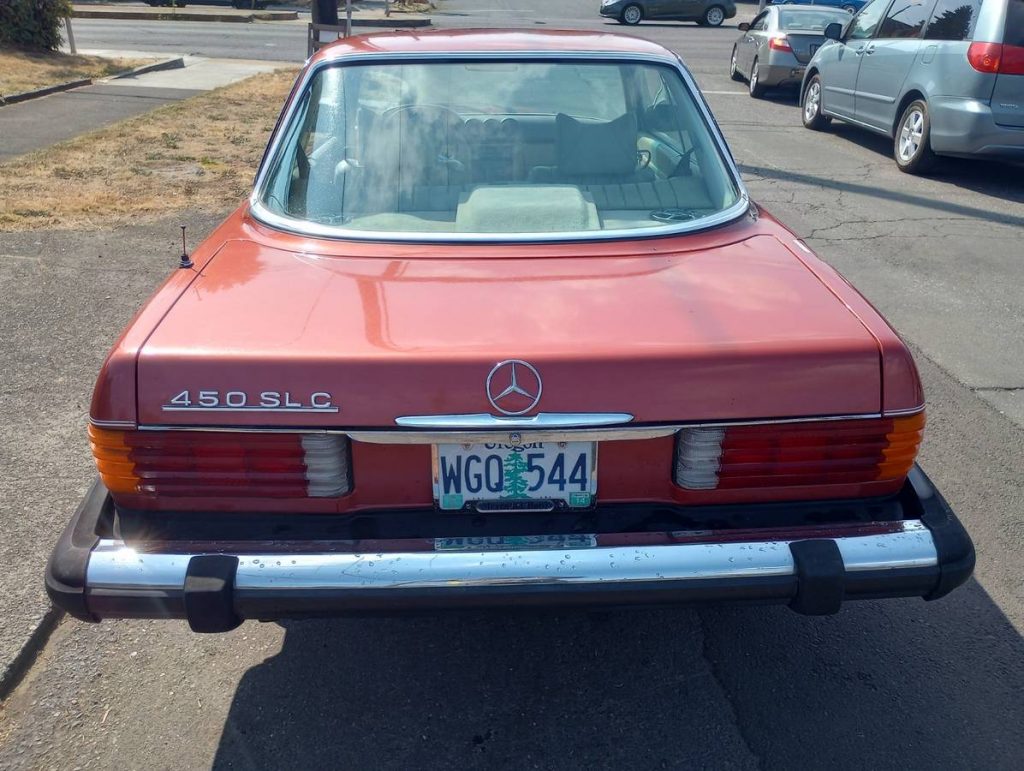 This 1979 model is a 450SLC, which by Mercedes’s reckoning, means it has a 4.5 liter engine. As a US model, this one has a soggy low-compression version of the M117 single-overhead-cam V8, and giant Federally-mandated 5 mph bumpers. It’s a full thirty horsepower down from the same car in Europe, and eight inches longer from those big silly bumpers. No wonder gray-market imports of European Mercedes were so popular. 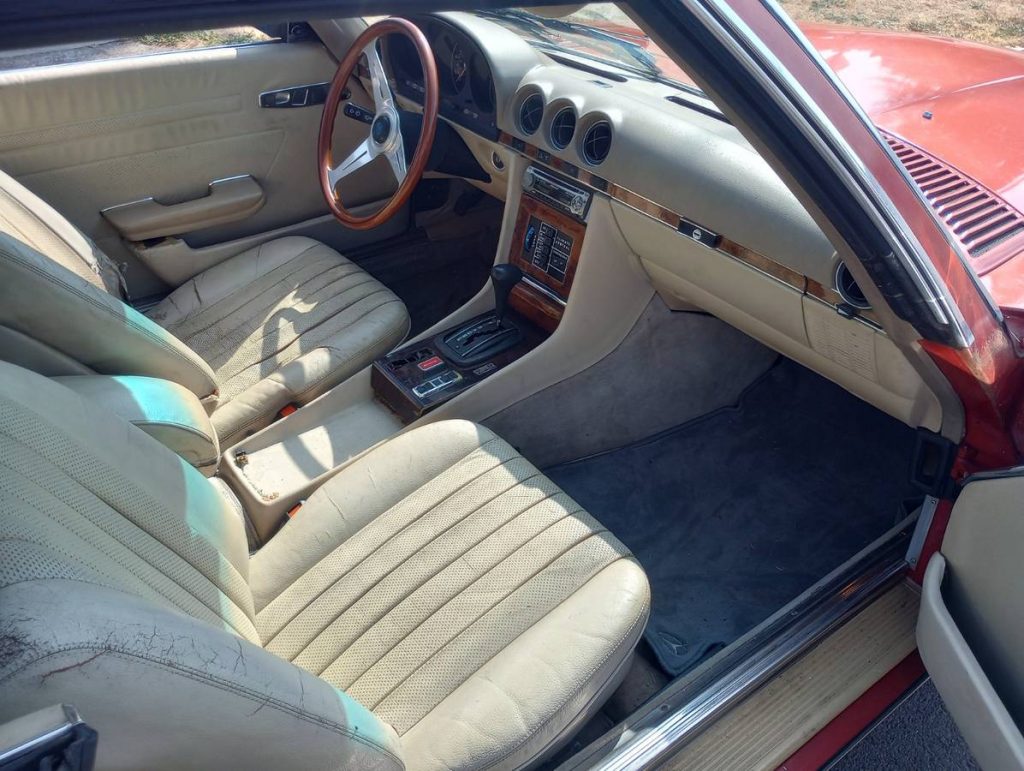 These have always been lower value than the convertible SL models, but I can’t understand why this one is so cheap. The seller calls it a “project car,” but also says it “runs and drives good.” The exterior looks fantastic and is a great color. The interior is scruffy, but serviceable, and it has a nice Nardi (or Nardi knockoff) steering wheel in place of the ugly stock Mercedes wheel. 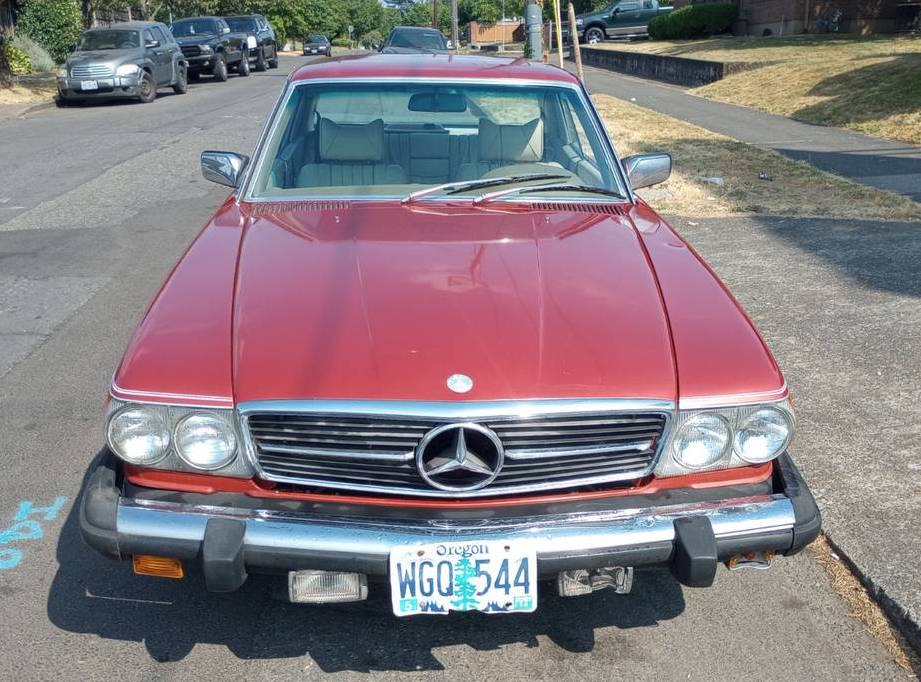 Honestly, this looks like a nice weekend cruiser as is, unless it won’t pass smog (it was last registered in 2014) or the transmission is on the way out or something. The ad is very light on specifics, so a test-drive is the only way to find out. The ad has only been up for a day, and I suspect that it won’t be up much longer, if this car is as nice as it looks.

Tomorrow is a bit of a special occasion, and I’ve got something celebratory planned, but for today, these are your choices: a nearly-forgotten Japanese coupe, and a German hardtop overshadowed by its drop-top sibling. Neither one is perfect, but either one could turn some heads with a little work. Which one will it be?

Pacific Northwest-based self-taught DIYer of all the things. Current fleet: 1971 MGB GT, 1989 Chevy K1500, 2013 Chrysler 300C, 2003 Infiniti QX4, and 1966 Aristocrat Land Commander trailer. Not to mention about 40 RC cars and around 100 model kits...
Read All My Posts »
PrevPreviousCold Start: This Was The Second-Coolest Golf Cart At Monterey Car Week
NextI’m Flying To Australia On Friday To Attempt The Hardest Wrenching Project Of My Life. I’ll Take Any Advice I Can GetNext