Make Mine Malaise: Our Daydreaming Designer Applies The ‘Pike Car’ Approach For This Nostalgia Machine 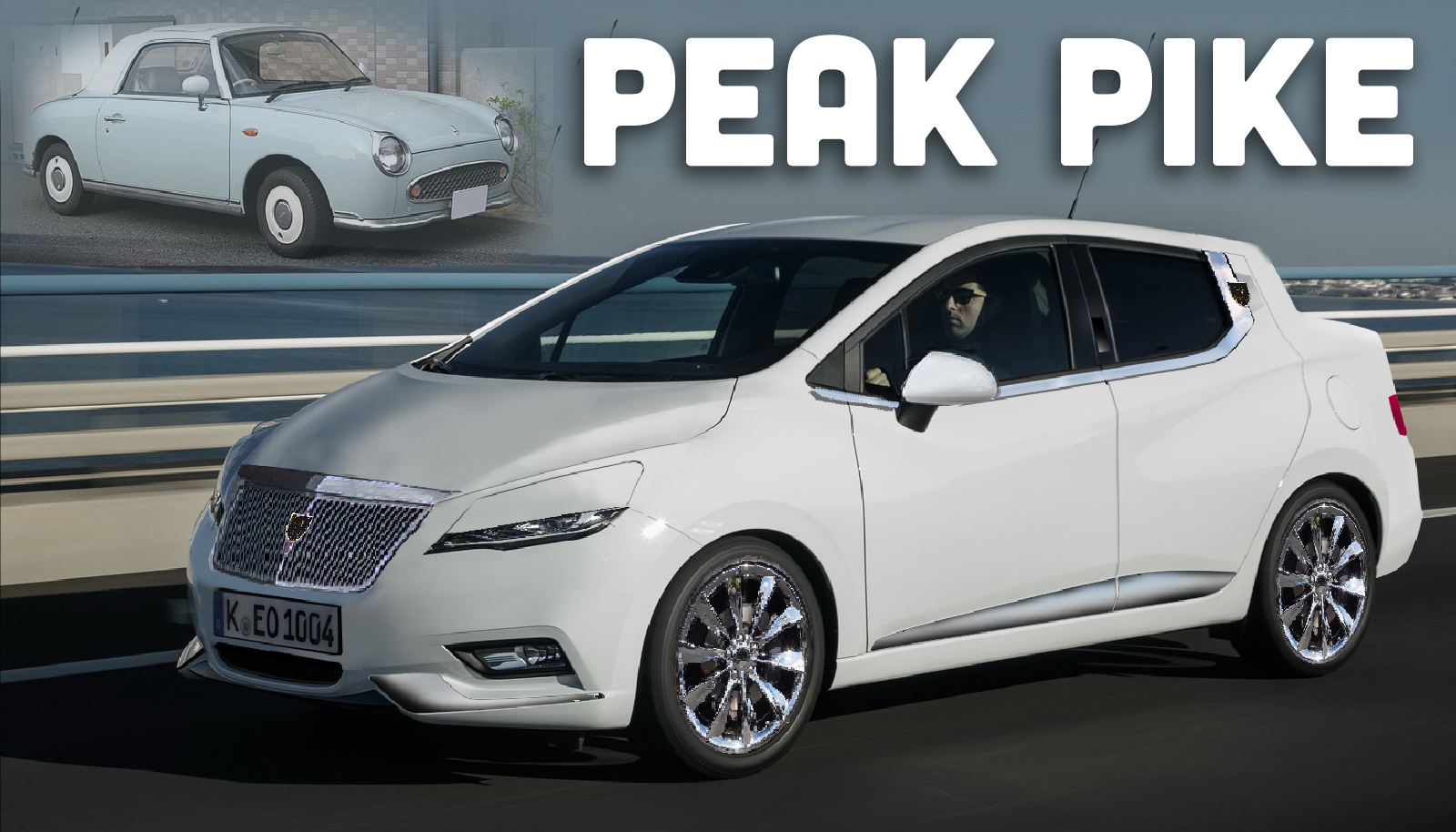 Nostalgia is something that can often be co-opted by other cultures. Whether it be British-style punk rockers in Japan or even American girls enamored with Sanrio toys, a transcontinental phenomenon can be highly marketable. In the automotive world, nostalgia takes the form of “retro” cars, and Japan once leaned heavily into this trend.

Back in the early 1990s, Nissan created a series of vehicles styled to look like iconic European cars from the fifties and sixties. The Figaro echoed the looks of a sliding-roof Fiat, while the Pao looked a bit like a Renault 4; there was even the ‘S Cargo’ inspired by a Citroen 2CV van. Under the skin, these “Pike” cars were underpinned by mechanicals from the modern Micra/March and had amenities like automatic transmission and air conditioning.

Despite the fact that many Japanese citizens never had a ton of experience with the European cars that inspired these designs in real life, the popularity of Pikes was insane, to the point where there were lotteries held for the chance to purchase any one of these.

Tiny Japanese manufacturer Mitsuoka did a similar thing on the same Nissan platform with the Viewt, designed to look like a ’50s/’60s Mark II Jaguar: 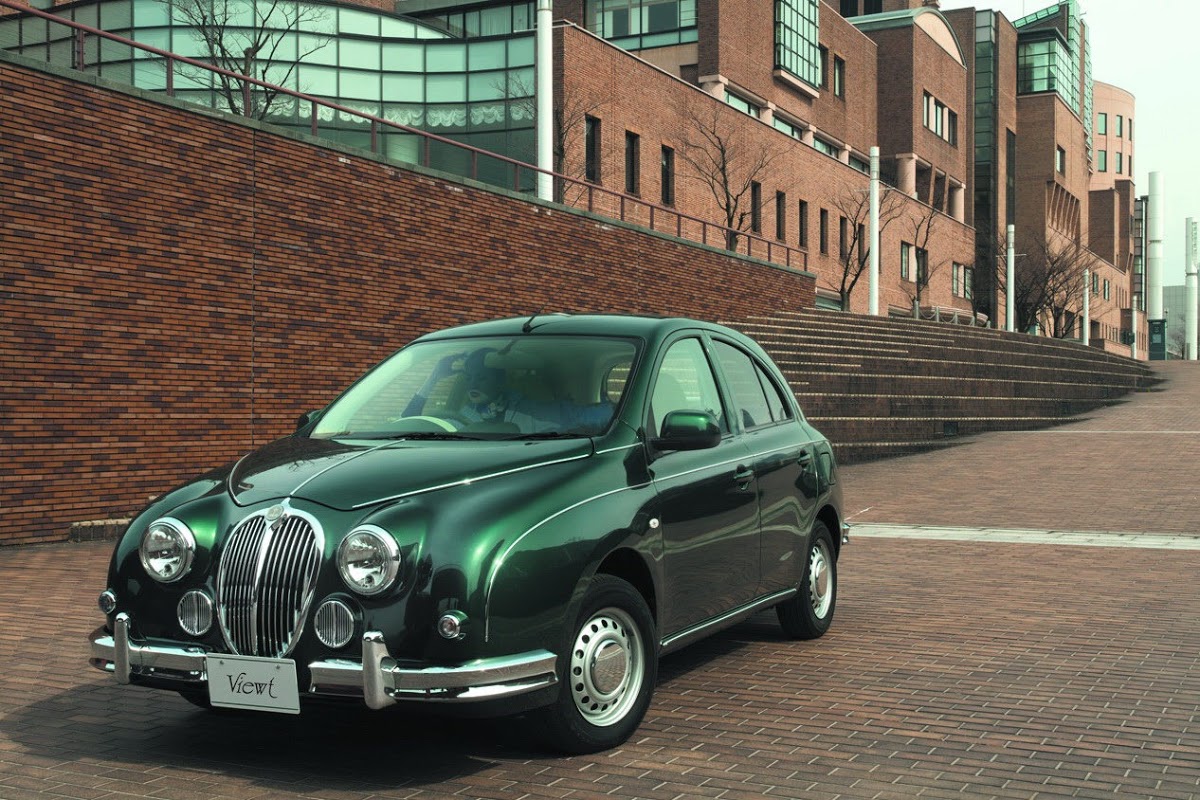 What if the idea of a Pike car came back today? Well, the original ones in 1991 were influenced by cars that were, around the time, about 30 to 40 years old. If we were to make a retro car out of the current Nissan Micra today to echo the looks of a three- or four-decade-old car, that means we need to look at vehicles made from around 1983 to 1993.

Am I the only one that feels really old now?

What should we use for inspiration for this modern-day Pike? European cars from this era were often quite functional and almost timeless in design (like a Golf or a Renault 5) to the point where it’s hard to find much in the way of fun anachronisms. However, many American cars made during the time still had a baroque, outlandish flair to them. The Japanese actually had been influenced by U.S. cars in the past, like with the Celica which appeared to be a mini-Mustang or big domestic market Mazda sedans that looked like a Plymouth Fury:

I think we need to aim our sights on the final ‘Malaise’ styled cars still produced during this time; the last cars made with vertical ‘formal’ rooflines, huge ‘c’ pillars, chrome ‘waterfall’ grilles, and even covered headlights:

These cars did not age well and were laughed at almost immediately after they were produced. However, just as today you can listen to ABBA or the Bee Gees without shame, there are now fans coming out of the woodwork for these gingerbread-adorned upright coupes and sedans. Many of them are younger fans, often not older than the cars themselves. This makes sense, since the original buyers are likely dead, and GenXers like myself still tend to cringe at the sight of them.

To keep the true spirit of a Pike car, we really need to use the latest version of the same vehicle the originals were based on: the Nissan Micra. Not sold in the United States, the Micra has a size and proportions that honestly make it extremely difficult to replicate an American personal luxury car, but that ain’t gonna stop us. 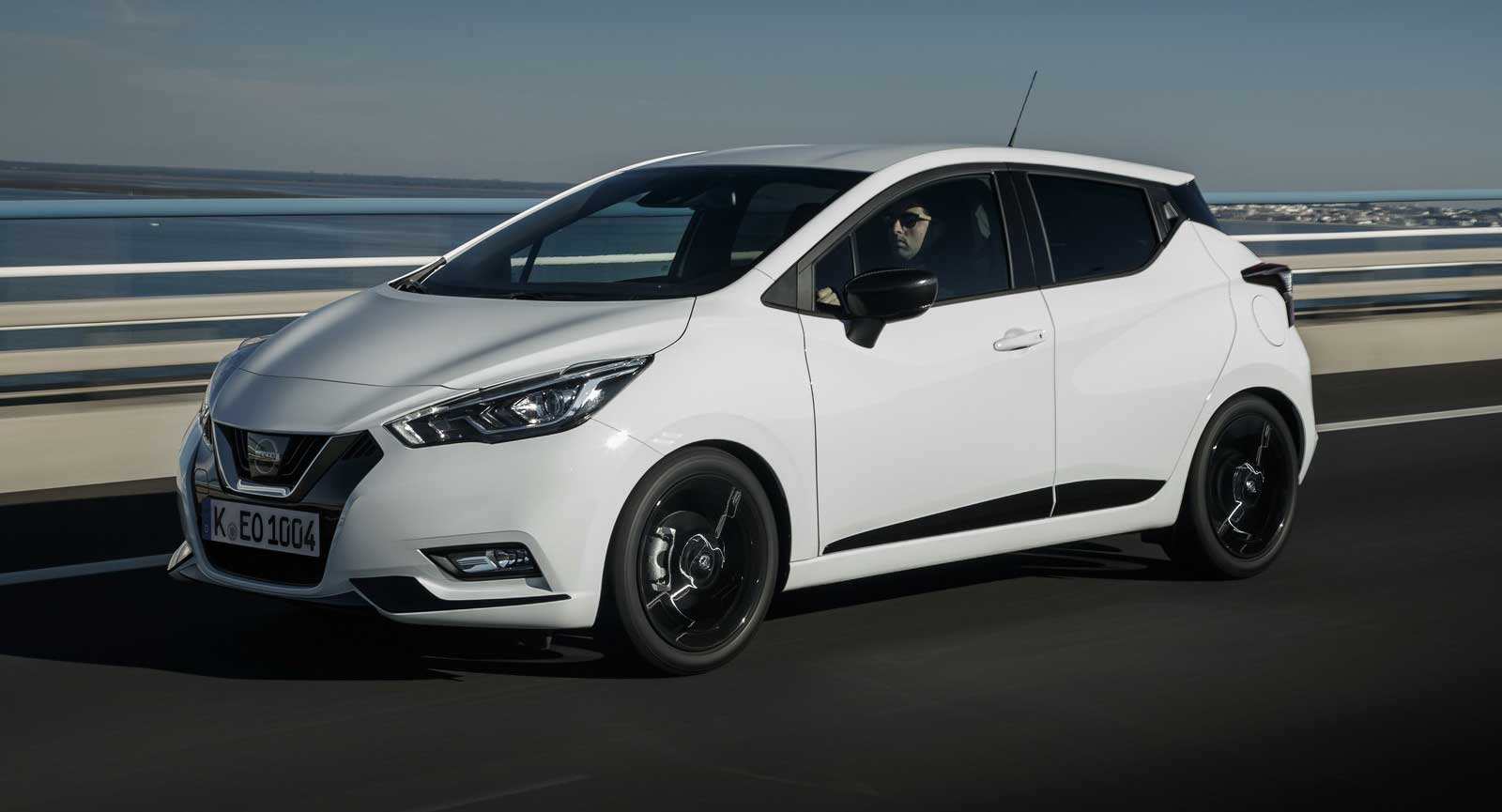 This time around, Nissan doesn’t have the ‘bubble economy’ money they did in the ’80s. They’ll need to do exactly what the makers of the American cars they are emulating did back in the day: make as few changes as possible to create a “luxury” car out of an inexpensive vehicle. All of the Big Three did this back in the Malaise era, with manufacturers like Chrysler being so cheap as to actually glue shit onto a sedan to give it a different roof line. Take a look at how they added a fiberglass cap to turn a low-level Chrysler E-Class into the more posh New Yorker:

We’ll try not to do that and make most of our changes more seamless onto the Micra structure. Here’s our Pike car in all its glory. It’s named the Boca Raton, after the Florida city that is really the sixth borough of the Big Apple where semi-well-to-do New Yorkers go to retire and overstuffed ‘luxury’ cars once abounded: 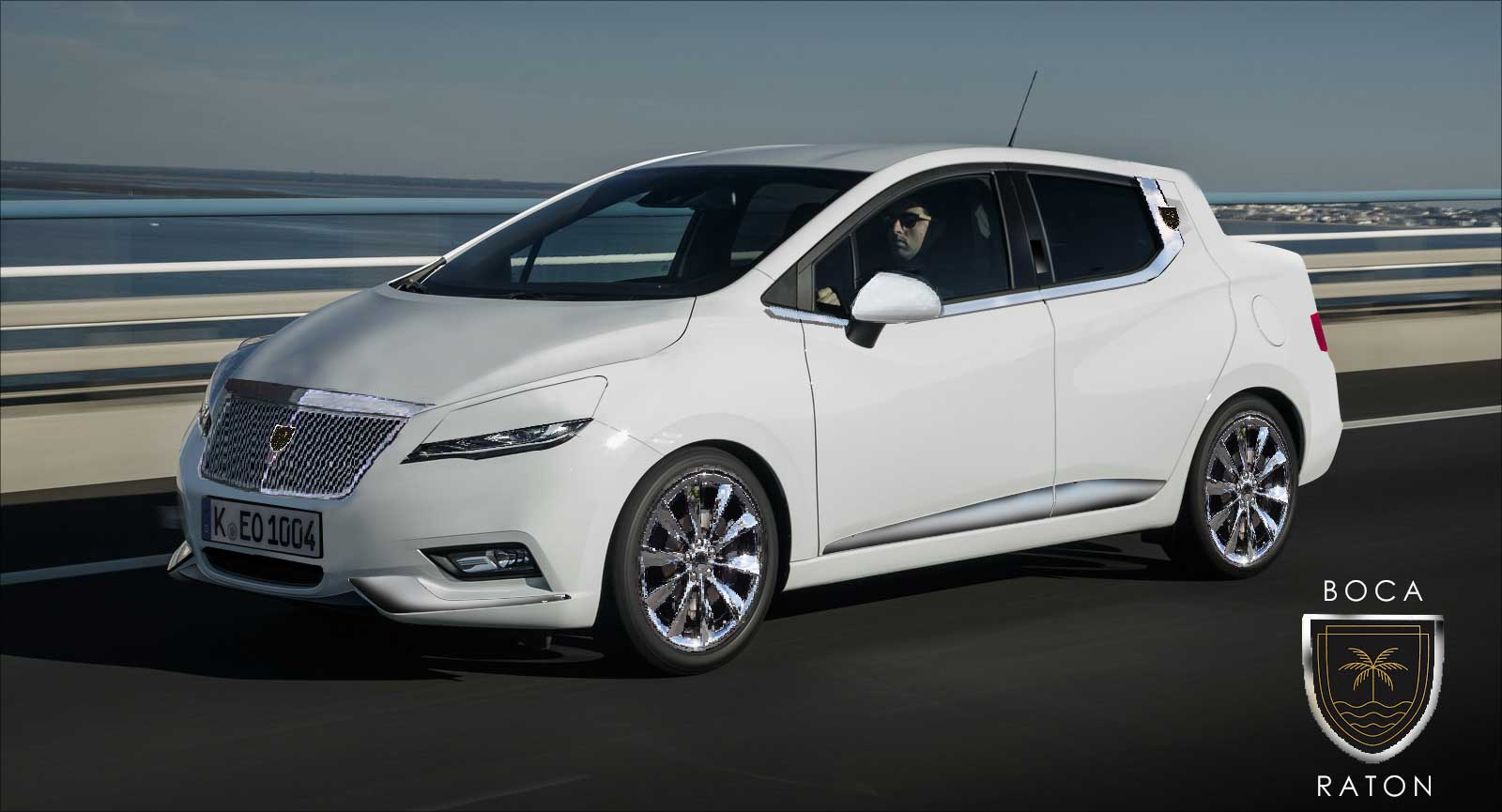 You can see that the front clip of the Micra is changed to incorporate the chrome grille flanked by projector headlights behind flip-open doors:

Well, unless you get the lower level ‘Salon’ model (below the ‘Brougham’ level) that just has exposed lights: 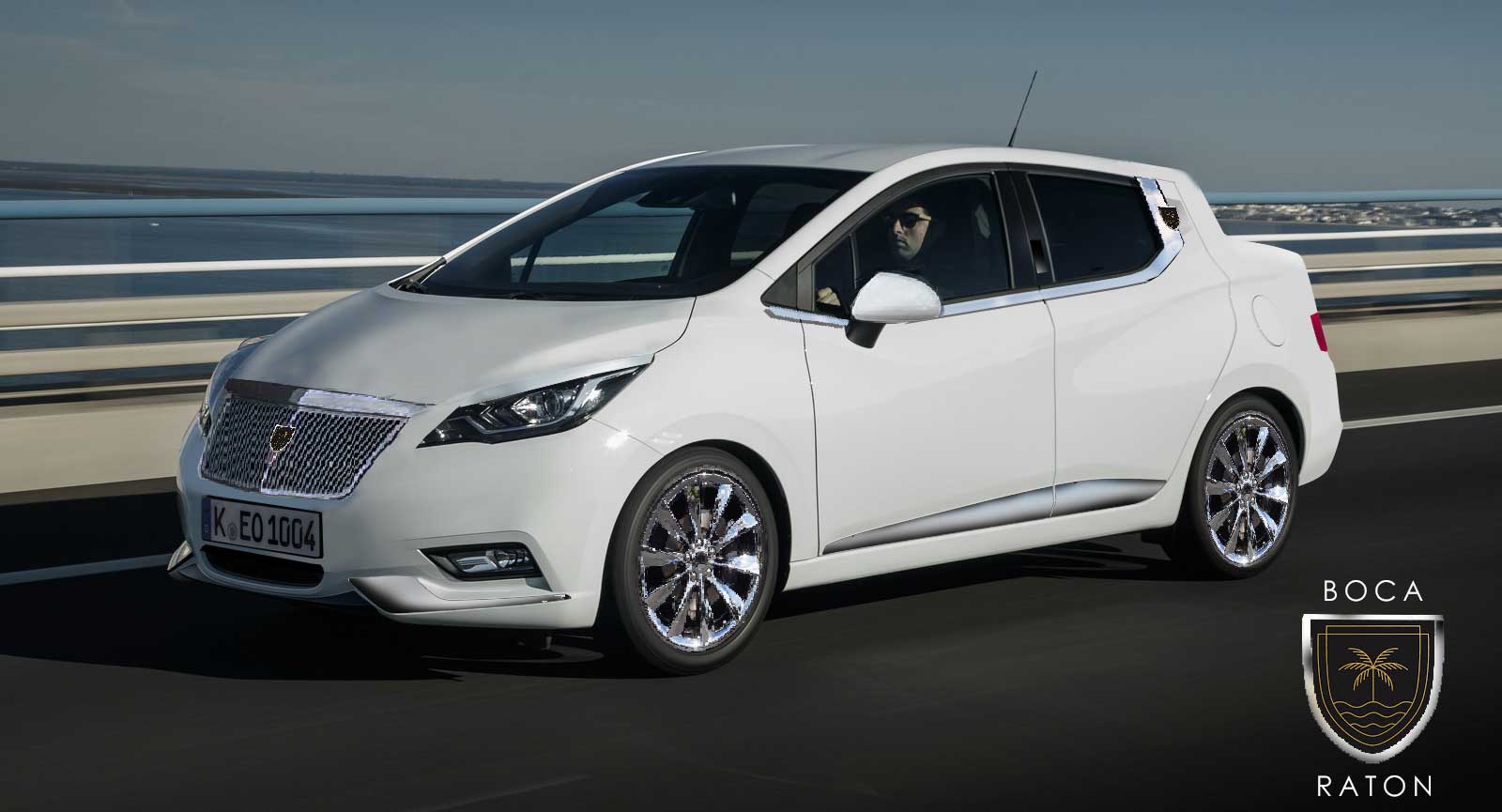 Chrome replaces much black trim, door handles moved into the window area, and a ‘formal’ roof line caps off the rear of the greenhouse. You can see that the lovely Boca Raton logos on the C pillar (hiding the door handle) illuminate with electroluminescent material: 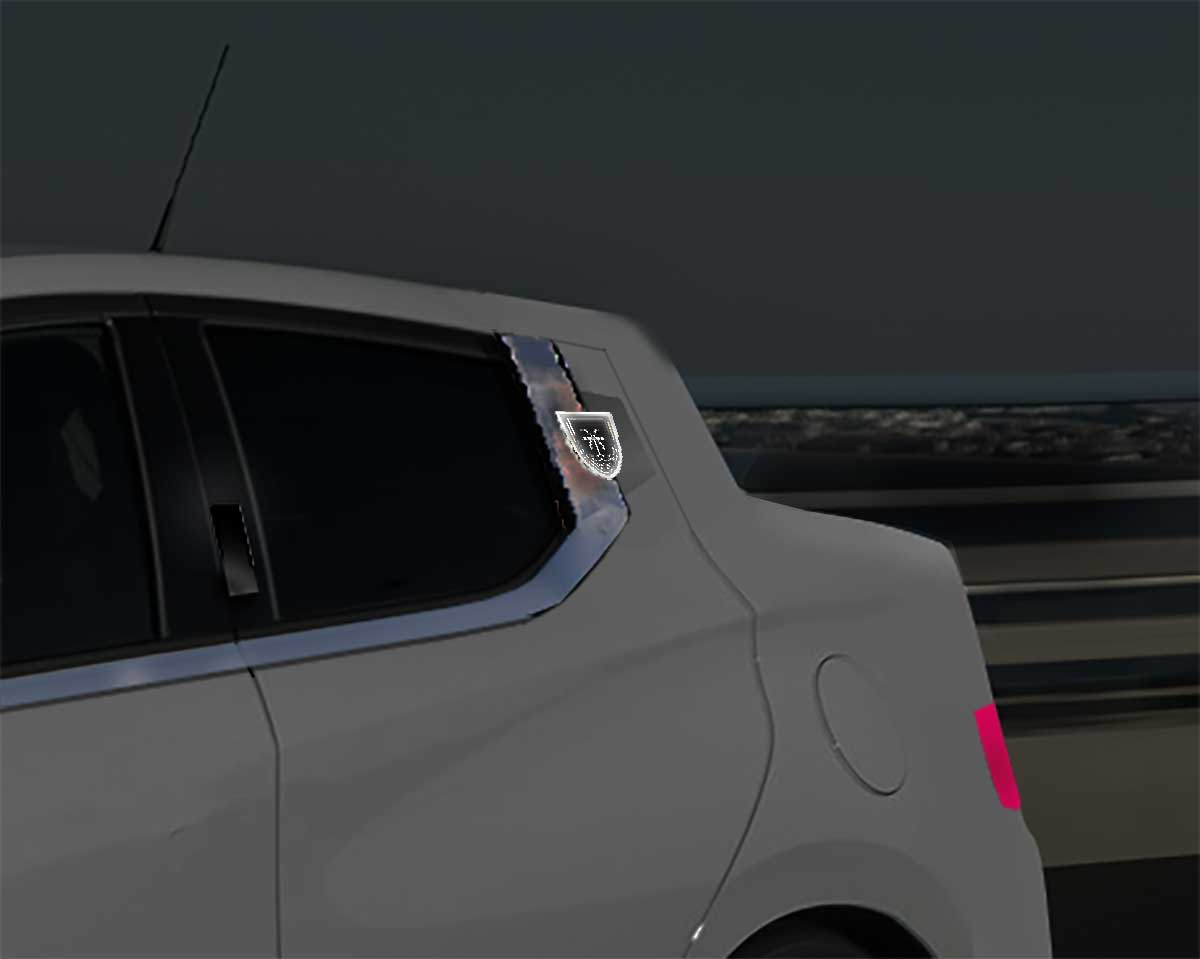 Below is a rough sketch of the back. Here, the bumper section extends the rear overhang and the reshaped hatchback forms a sort of ‘trunk lid’. The wide rear taillight with the center reverse lamp is a perfect late Malaise touchstone with hidden amber signals for nations that (rightly) require it. The blocky form is very reminiscent of the bustle-backed 1981-83 Imperial or the Fox-based Continental and ends up looking much like a 1986-1991 Seville/Eldorado. I thought that keeping the German license plates and adding the mandatory rear foglight below the bumper added to the absurdity. 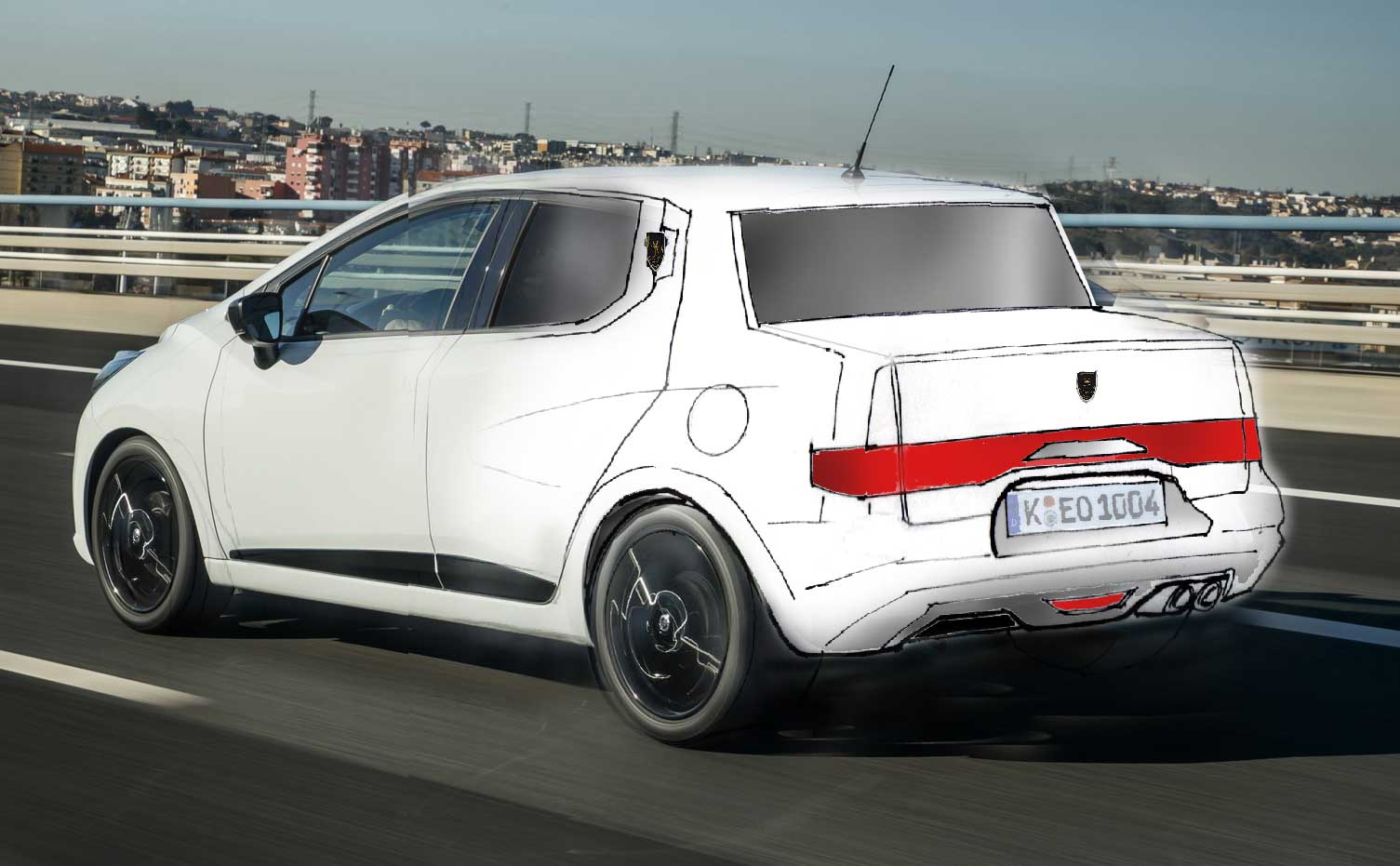 Inside, the nostalgia has to continue. While things like the infotainment screen and climate controls will remain standard Micra items, the things around it can change. Tufty seats will feature Rich Corinthian-style leather, which will continue to the doors where it gets complemented by traditional American luxury car staples such as coffin-style pull handles. We’re too narrow for three-wide seating, but we need to have a bench front seat and column shifter for the automatic transmission. The dashboard features a boxy shape with burled walnut woodgrain trim and LCD screens displaying retro fluorescent-looking readouts. We finish it off with an old-school massive center airbag box steering wheel and a metallic finish analog Seiko clock. 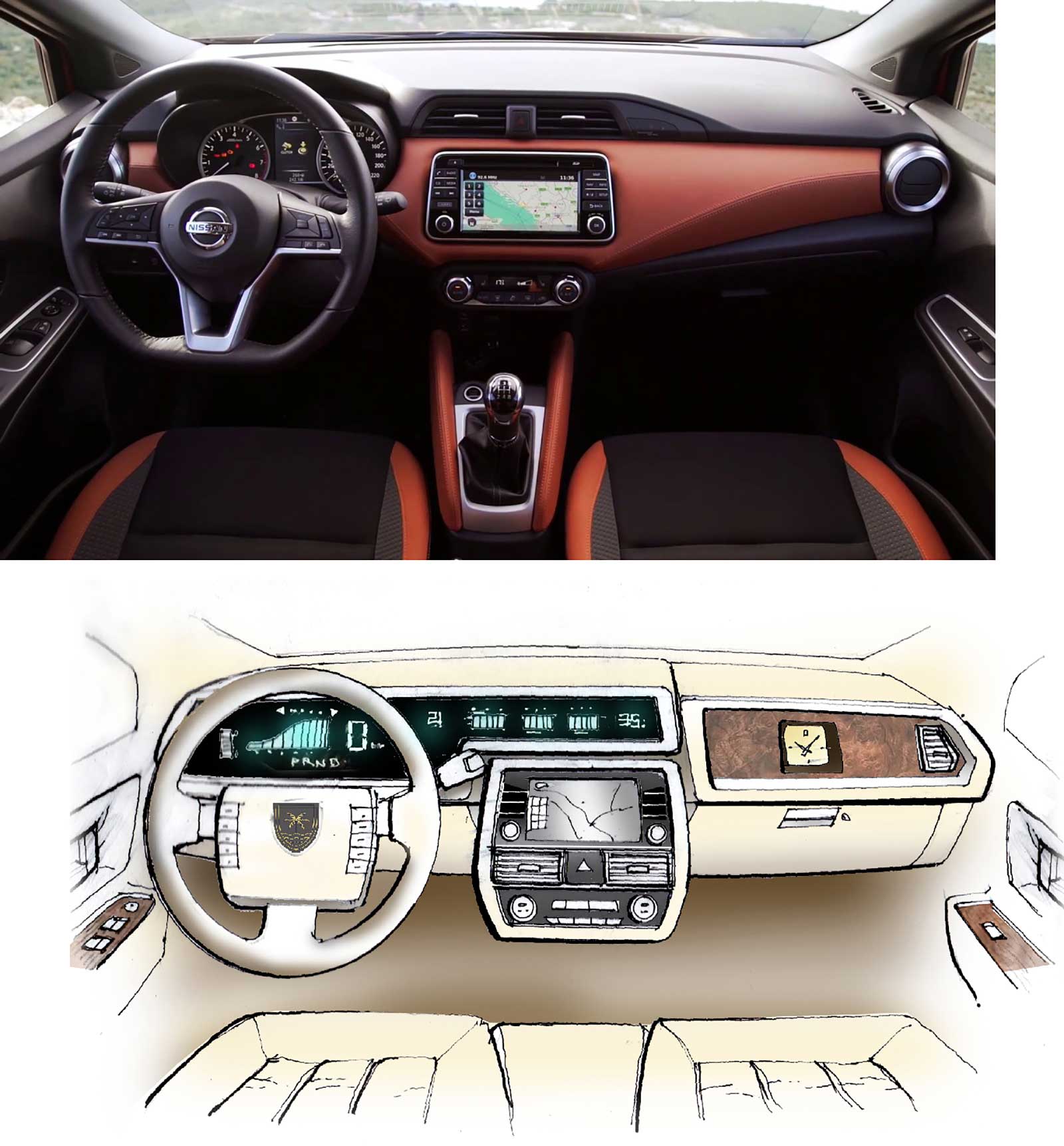 Would anyone purchase this thing? I say it’s improbable, but I bet that nobody thought that silly tail fin-backed ’50s cars would be objects of reverence to be fawned over at retro-styled burger joints decades later. Maybe, like those cars, it would be an almost reverse-status-symbol so-bad-it’s-good object. In the car business, there supposedly is “an ass for every seat,” and I think a 5:8 scale Mark VIII would find a few posteriors.

Read All My Posts »
PrevPreviousOur Pro Car Designer Shows You How To Sketch Your Dream Ride
NextSwapping A Set Of Tires In Ice Cold Wind Really Sucks, And We Have No Idea Where The Sun Is: Day Four Of David’s Terrible MoveNext