Man, I love having access to a talented designer with some automotive training, but not so much, so there’s still that outsider’s freedom from convention and trends. I am, of course, referring to The Bishop, our designer who lets his imagination run wild from either his own perverse ideas, or bad ideas I feed him. This week, after making him design an Oldsmobile for literal old people last time, he’s gone back to something genuinely fun and vastly less depressing: imagining what a Bubble Era Subaru may have built if they’d been as inclined to try experimental “boutique cars” like Nissan and Honda and Mazda. The result is bittersweet, like all the best imaginary cars are, because while wonderful, we have to remember that, no they don’t exist. So, prepare accordingly, and meet the Subaru Kalahari.

Just so everyone is up to speed, when we talk about Bubble Era Japan we mean the period from about 1986 to 1991 when real estate and stock market speculation, cavalier lending, and loose government policies all conspired to make that period a really good time in Japan, with everyone flush with cash and carmakers feeling free to try all kinds of bonkers things, until it all came crashing down, because, you know, bubble.

But, before that bubble burst, we got incredible cars like Nissan’s Pike Factory quartet, the Be-1, Pao (you know, like mine!), Figaro, and S-Cargo, as well as cars like Mazda’s gullwing’d Autozam AZ-1 or Honda’s fun little Beat. These were all cars that were designed to be fun over everything else, built on tried-and-true platforms but highly experimental and open with body styles and character. It was a fun time for cars, with a significant but not-too-serious retro flair. 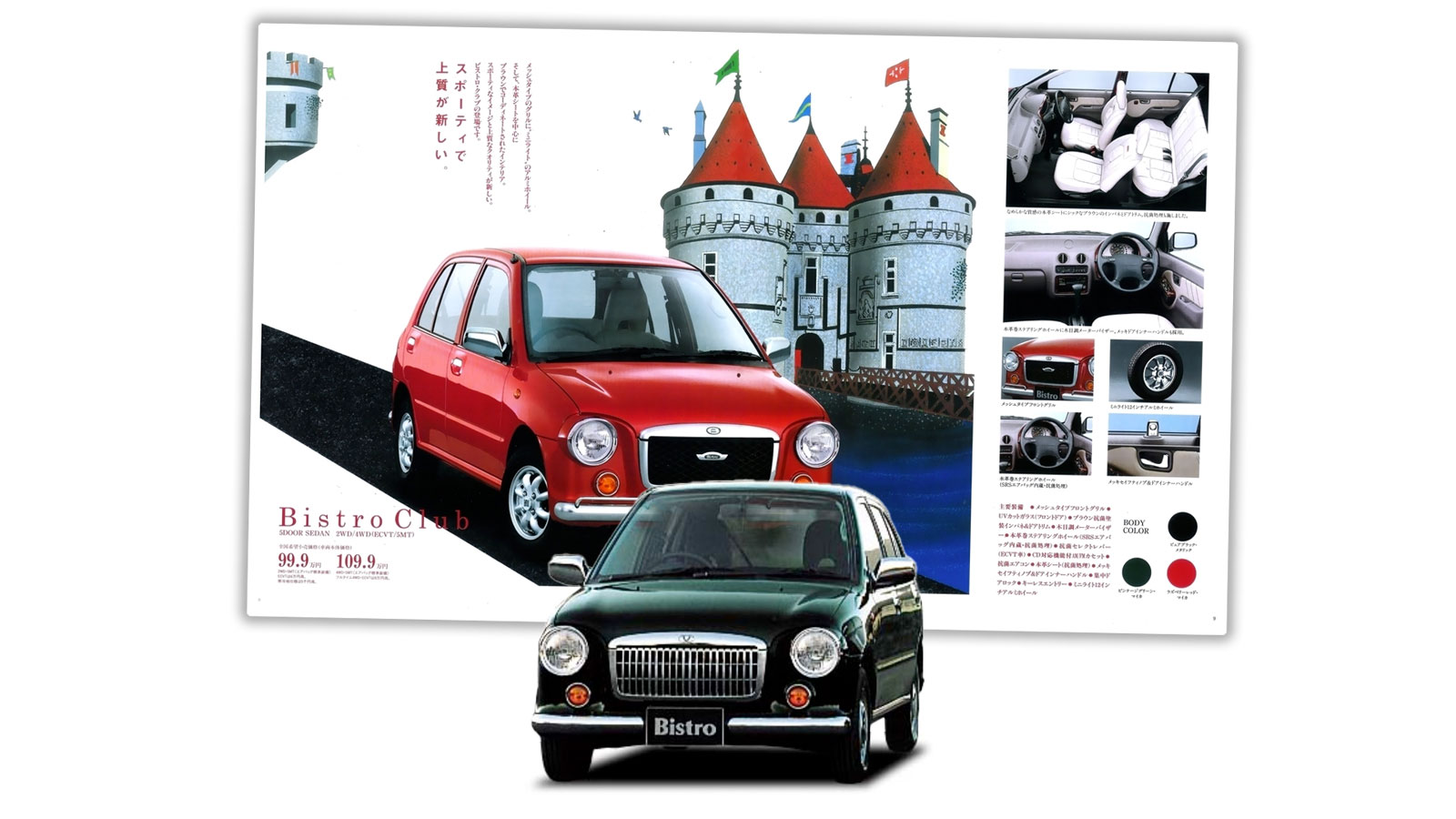 Subaru played a bit in this space as well, but a bit later than everyone else, with cars like the Vivo Bistro, a little city car with a lot of retro style, but, significantly, Subaru, despite their long history with four-wheel drive, never thought to adapt the retro-fun-car aesthetic to a genuine off-roader. But they could have, and that’s where The Bishop comes in. 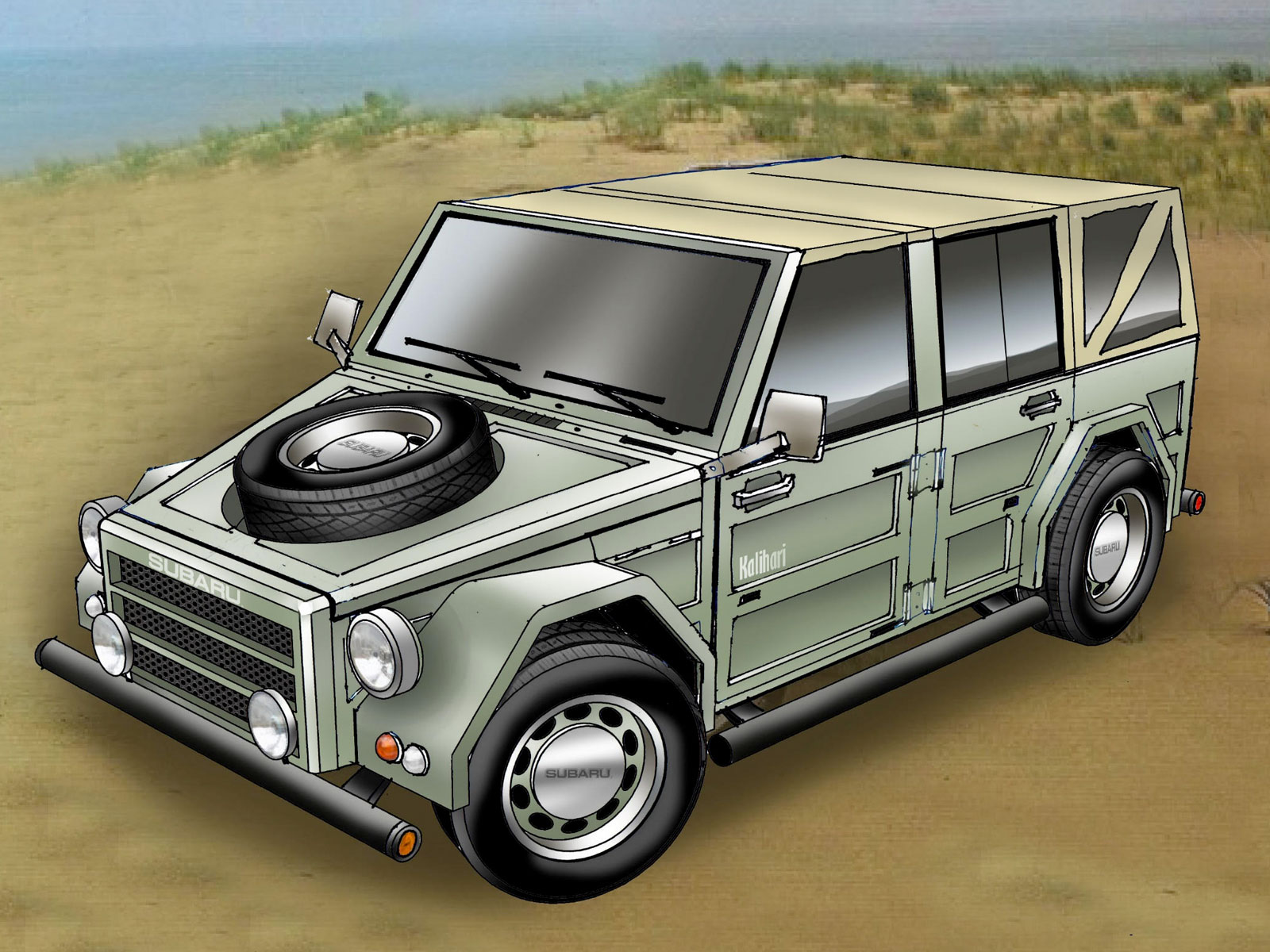 This company later built cars with a third headlight under a door, tires mounted on top of the engine and made a production four seater where two of the passengers sit outside the car?  NOW we’re talking a company (Subaru) that would have been crazy enough to make one of these stupid cars AND sell it here.

But what kind of stupid car?  If there is one area that the Pike cars and retro movement left underserved, it was off-roaders.  This was an area that needed to be addressed in a time when even the most retro 4WD available at the time (the Wrangler) was getting square headlights and a plasticky dashboard…ewww.  Is there a better company than Subaru to make this happen?

Of course, Subaru didn’t offer a true Jeep-like truck type vehicle as a basis, but neither did companies like Volkswagen or Citroen, and that didn’t stop them from creating scrappy little off-road vehicles.  In fact, it is car-based vehicles like the VW Kubelwagen/Thing and Citroen Mehari that would serve as inspiration for the Subaru retro Rover, and they had the perfect car to underpin it in the by-then-old Leone, a car already used to create the bonkers BRAT.

Presenting the alternate reality 1991 Subaru Kalahari, a pastiche of those aforementioned French and German buggies, though being a two-box four-door it does bear the greatest resemblance to a Gelandewagen or the Kübelwagen, ironically a car that years later power-hungry owners would stuff with Subaru flat fours to upgrade.  Coal rolling Ram owners and knobby tired Bronco drivers would bet this thing couldn’t off road, and I can assure you that would be a very bad bet.  If Soobie felt the need to add insult to injury they could even install a turbo or the flat six from the door-stop-shaped XT6.

Hot damn, that does look fun: a proper VW Thing/Mehari/Mini Moke-style off-road fun car, but this one would actually have four-wheel drive, something usually missing from this category of fun cars. And I could definitely see Subaru being able to pull this off. Let’s see what else The Bishop is thinking about the gloriously fictional Kalahari:

Paint will not be flat but will certainly be a powder-coat level minimal gloss in four colors like Olive Drab (above), Desert Tan, Faded Red, and a Pale Blue/Grey.  Honestly, it’s great to see that the latest Subaru Crosstrek is one of the FEW new cars that offers ACTUAL colors for buyers.

Another advantage of doing a Pike Off Roader is that, I think, as ‘trucks’ they would not be held to the more stringent safety standards of cars.  The tubular bumpers would need to be beefed up to be 2.5MPH units…note that the molded caps on the ends of tubes incorporate side marker lights. 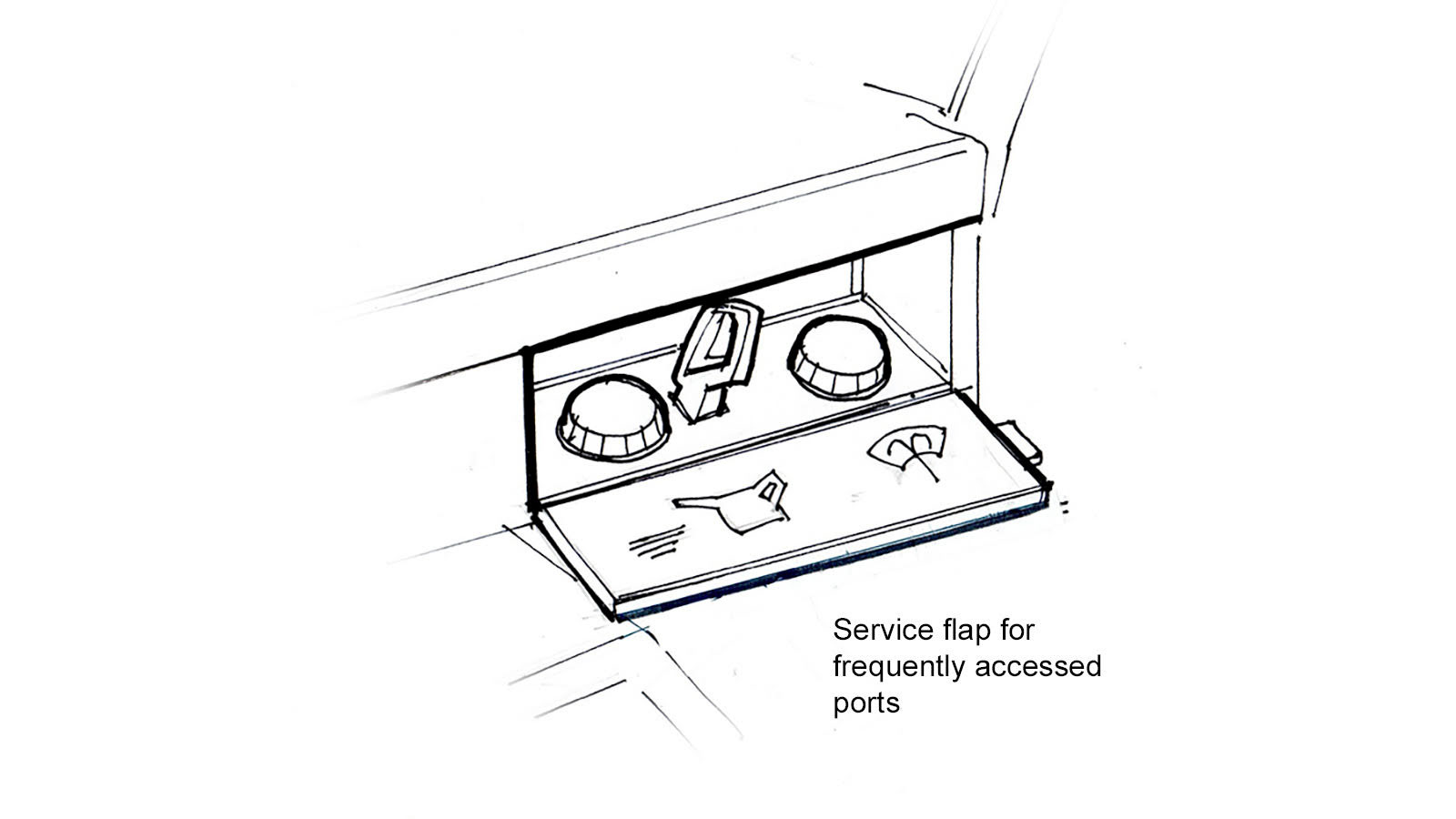 I thought about the hood lifting around the tire instead of with it, but that gets complex.  The tire on the hood, of course, makes it heavy to lift, so like on VW products such as a Type 3 or 4, Porsche Boxster, and Audi A2, the items you need to access regularly (dipstick, washer filler) are behind a small flap in the fender in front of the driver’s side door so you don’t have to raise the hood anyway (the driver’s door secures the flat when it is shut).  Let’s face it…it’s a Soobie so you will never need to open the hood until the oil looks like a milkshake and you know it’s time to replace the head gaskets because Subaru.

There’s more fun stuff around back:

Let’s get a fake jerry can or two on back…I want to have the jack, tools, and first aid kid all in the fake can instead of stuffed somewhere in the rear cargo hold.  Note the tough looking license plate holder/tailgate latch with huge high intensity halogen reversing light. 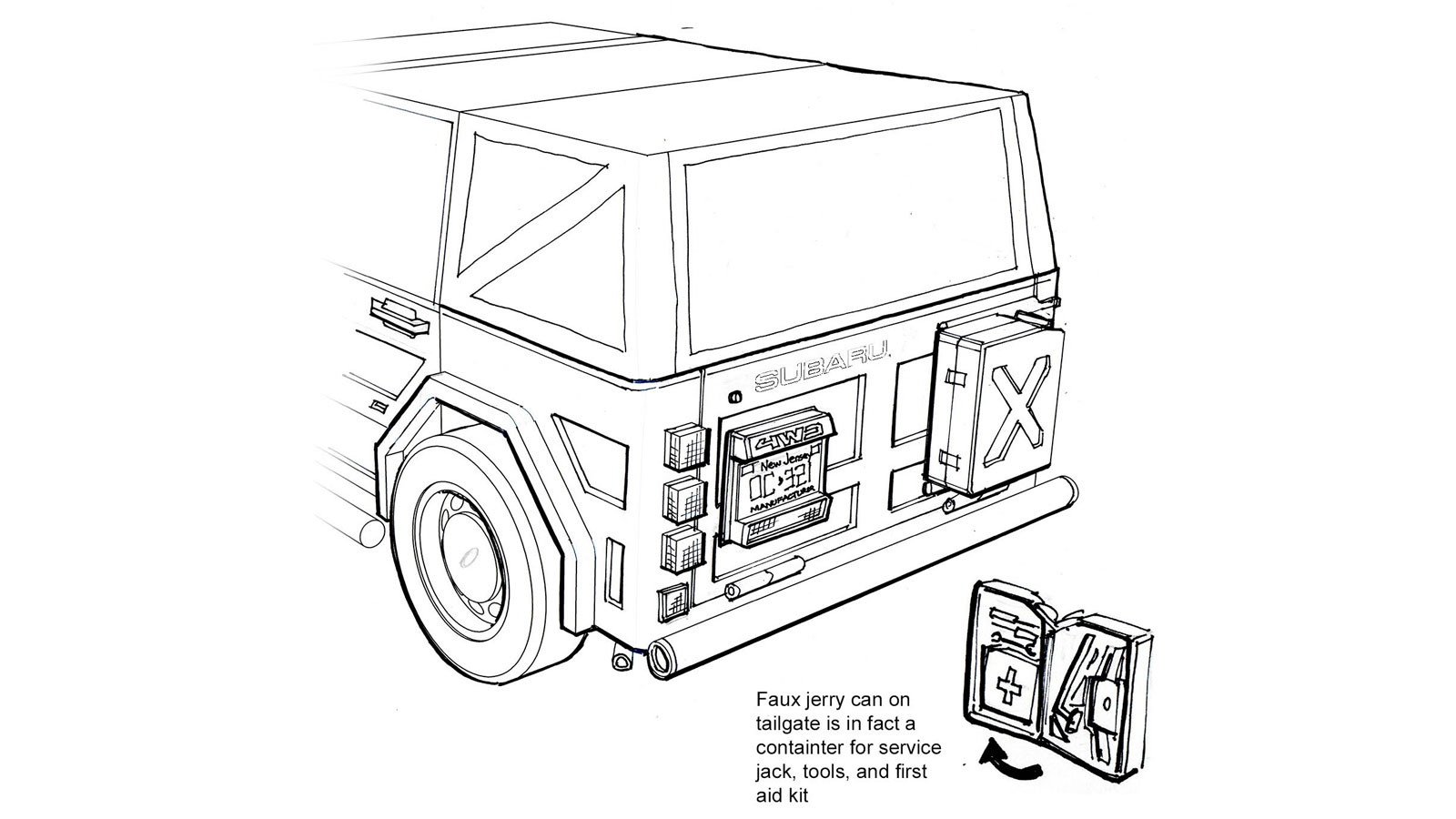 This seems like exactly the kind of vehicle you’d want to take the top and doors off, but The Bishop has another idea:

I’ve kept trying to come up with different ways of easily removing doors…IT JUST CAN’T BE DONE quickly.  What if the Kalahari just had front opening driver and passenger doors that, if check straps were released, could pivot around 180 degrees and secure in place with rubber restraints like the hood straps on a Jeep?  So if the feeling comes over you, it’s not a half hour ordeal you’re looking at…just open the doors all the way, slide them forward slightly to clear the rear wheels, and snap them in place (the inner panels are body color so they would sort of blend in when facing out). I mean, I could add quick releases in case you wanted to totally remove all four doors…but what a pain. 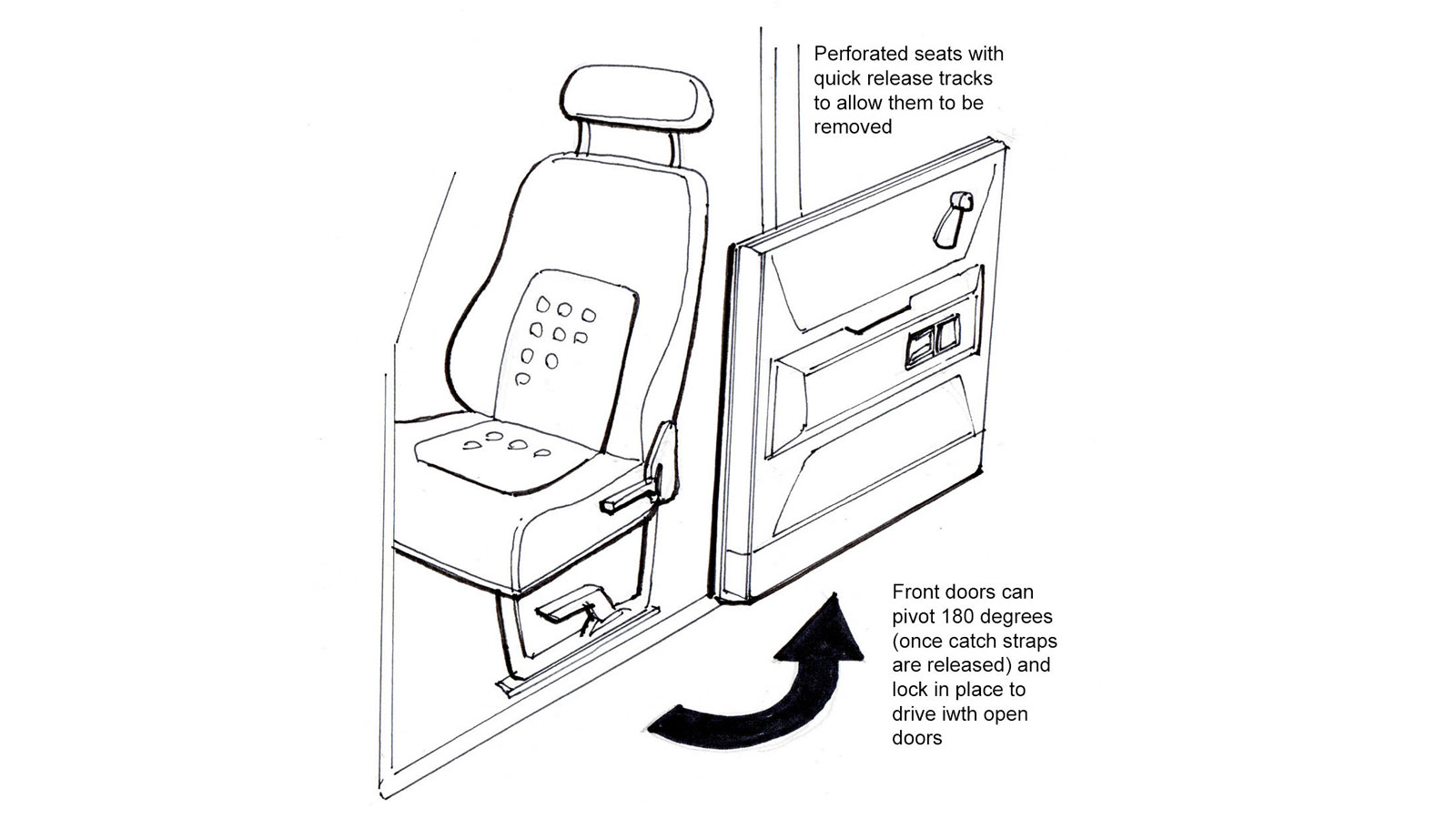 The interior would be spartan, like a military vehicle, and would get a lot of inspiration from military hardware for dash controls, display, and switchgear:

Those lever switches it has are a great idea for things like climate controls, and combined with the surface-fuse-looking push buttons and simulated etched chrome descriptor plates (which are backlit at night) you get a pretty good miliary vehicle look.   There’s an ammo-box style latch for the glove box, and the radio has that signal corps “echo bravo calling foxtrot alpha, do you read me” look to it, and what looks like the microphone is a corded reading lamp. 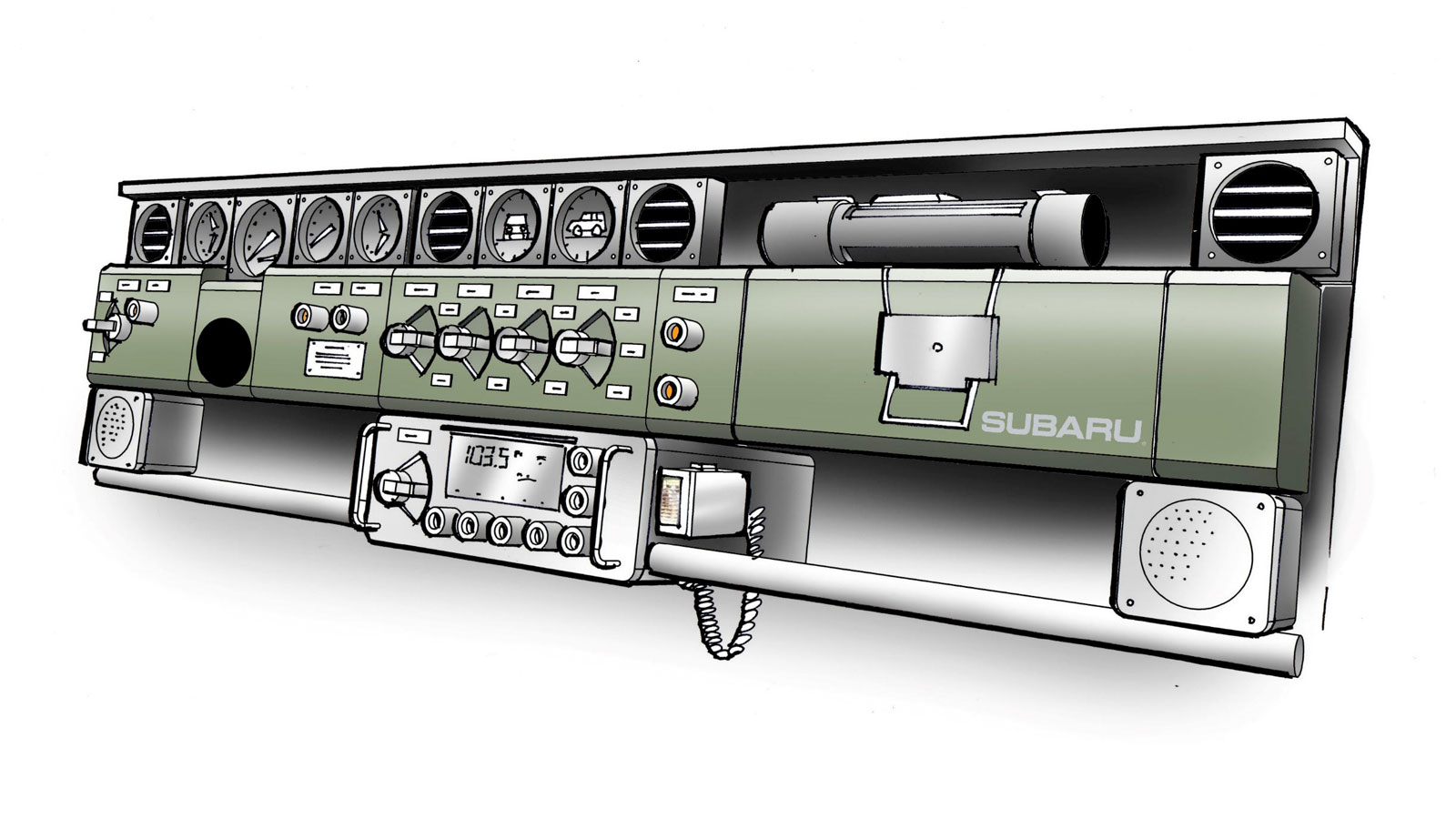 The gear shift for the Hill Holder-clutched 5 Speed is very industrial looking, and the 4WD/2WD lever is a tough, spring-loaded thing that is pure theater since it just actuates a microswitch that is usually a little push button on the Leone or XT Coupe’s gear shift.

Accessories will be key, just like on the Pike cars, and in this case we could look at things like a hardtop to make it more carlike, or go the opposite direction and go into the whole outdoor lifestyle for sleeping, cooking, and living in the face of insects and rain.  Oh, and don’t forget that the hose-down front seats can pop out to lounge by the campfire.

I really love the idea of this thing, and feel like maybe Nissan sort of approached the look and feel of this with their not-Pike-but-almost car, the Nissan Rasheen. The Rasheen was even a four-wheel drive car as well, but a lot less, I suppose, hardcore than what The Bishop is imagining for the Kalahari.

Here’s The Bishop’s summation of this wonderful fever dream:

I mean, it looks like a Jeep or a VW Thing but drives like an A/C equipped, independently suspended compact sedan for people that don’t have DT’s tolerance for solid axles front and back.….while most buyers would never off road it, I don’t think that they wouldn’t be disappointed if they did.

Would it sell?  More than any of the other cars I’ve drawn so far, I think this dumb-assed thing would undeniably be an insane success.  Like the Pike cars, I see these being produced to the tune of about 30,000 units worldwide, a number which will undercut demand to the point that this will be gouged at 1989 Miata levels.. maybe even 50 percent over sticker price in some markets.  But we’ll never know, because it’s too late now….OR IS IT??

I kinda think he’s right… I bet this could have sold decently well. I think it still could, if Subaru decides they want to be a little bit bonkers again. But what do you think? That’s what matters, here, the collective Autopian opinions! So tell us, and I’ll let The Bishop know to get in here and discuss it all with you. He even went out of his way to change a detail in the main rendering of it, just for you:

“BTW, I did just notice that while the front door windows would be frameless roll down items, the rear wheel arch means there is no room for the rear door windows to roll all the way down, so I changed them to sliding windows in frames that would pop out (like rigid side curtains) for full-convertible driving (the body colored ‘roll bar’ between the front and rear doors stays in place).

Autopians are smart and nerd out on the details!!!”

I'm a co-founder of the Autopian, the site you're on RIGHT NOW! I'm here to talk to you about taillights until you cry and beg me to stop, which I absolutely will not. Sorry. Hug? Also, David's friend.
Read All My Posts »
PrevPreviousThe Renault 5 Diamant Literally Reinvents The Wheel In A 50th Anniversary Tribute To One Of France’s Most Iconic Cars
NextThe Chevy Express And GMC Savana May Be Replaced By EVs After Nearly 30 Years Of ProductionNext