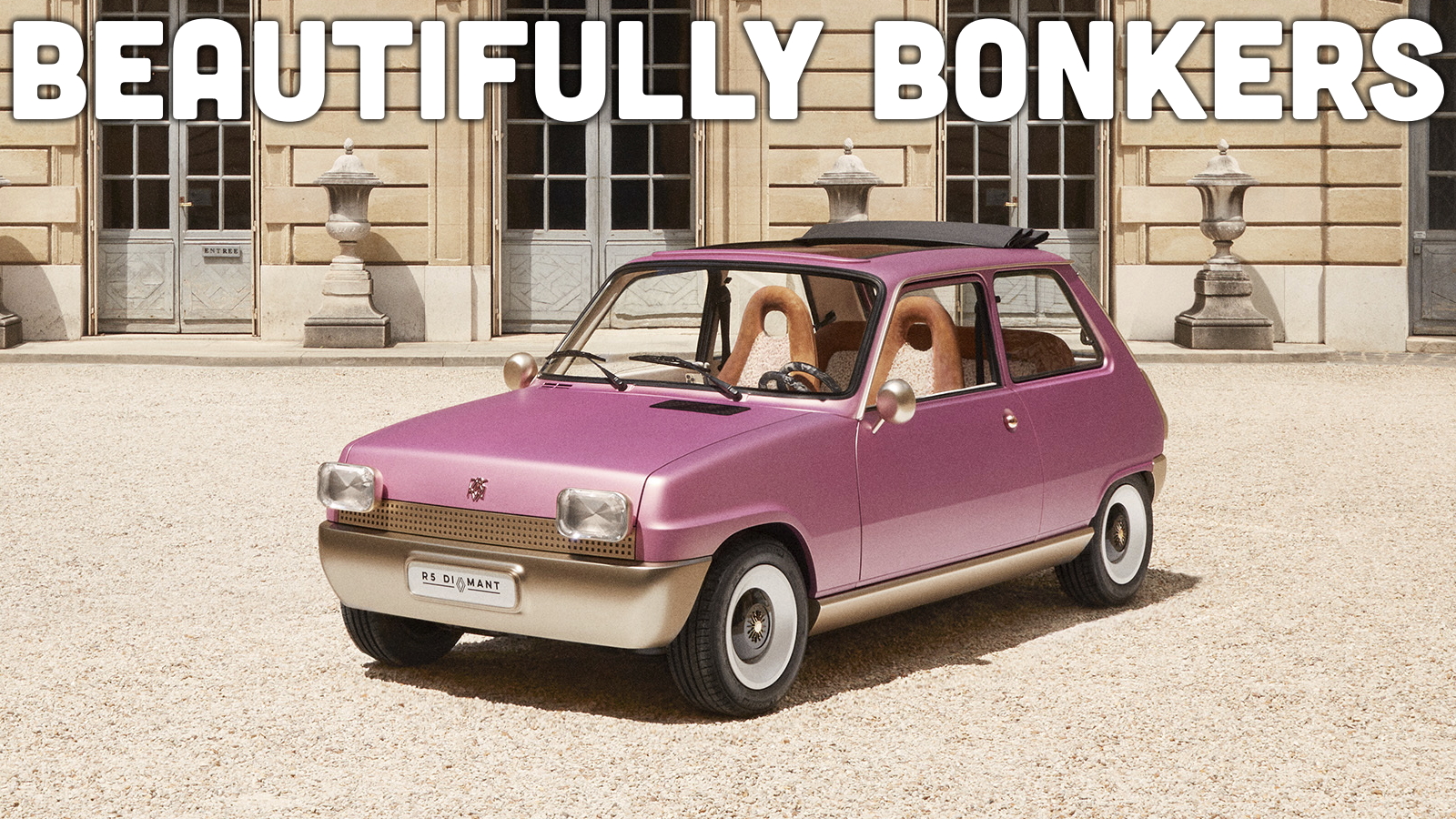 Think fast. You’re an automaker looking to celebrate 50 years of a discontinued model. How would you do it? Perhaps you’d trot out a very early example of said model, or create a retro-style concept based on a current production car. Fairly typical moves. However, if you’re Renault, you hire designer Pierre Gonalons and tell him to go absolutely nuts. Say hello to the Renault 5 Diamant, the most insane automaker one-off I’ve seen in a long time.

Back up a second. Who is Pierre Gonalons? A Paris-based designer and architect, Gonalons specializes in gloriously wild design across a variety of disciplines. For instance, Gonalons’ San Primo sofa feels like a classic mid-century modern piece viewed through a funhouse mirror. I’m a huge proponent of non-automotive designers getting into car design, a massive fan Marc Newson’s Ford 021C, so it shouldn’t be surprising to learn that I’m absolutely thrilled by Gonalons’ involvement here.

Right, let’s jump into the exterior of the Renault 5 Diamant. You’ve quite likely noticed how incredibly pink this car is, although pink is only component of the paint. See, gold pigments are sprayed over a pink base coat, then topped with a satin clearcoat. The result is this frosted donut-like paint that’s absolutely delectable. Paired perfectly with the pink paint is a raft of soft gold accents, from the lower trims to the grille. Honestly, you kind of need gold for a 50th anniversary, and this modern soft gold is intriguing and less garish than traditional gold. More of this, please.

Take a closer look at the front of the Renault 5 Diamant and things start to get weird. Instead of the standard Renault 5’s flush headlights, the headlights on the Diamant stick out from the body and feature gem-cut lenses. Paired with the square-punched gold grille, these lights make the Diamant’s front end looks familiar and outlandish all at once. Also worth noting? The shaved front bumper. No indicators, no lower grilles, just space for a license plate, a gold finish, and that’s it. Keep an eye on this pairing of minimalism with maximalism, we’re sure to see it later.

Moving to the wheels of the Renault 5 Diamant, they claim to be sourced from a Renault 5 Alpine, although they don’t look like any R5 Alpine wheels I’ve seen. Perhaps they’re just wearing hubcaps with sun symbols, something Gonalons holds dear. Shuffling around back, we start to see some familiar themes. Like the headlight lenses, the tail light lenses are gem-cut and perfectly clear. It’s a wild look that I’m honestly all here for. All-clear tail lights are still cool as hell. They pair perfectly with the square-punched grilles on the C-pillars and the subtle gold badges on the hatch. Good stuff.

One thing you don’t see at the back of the Renault 5 Diamant is an exhaust tip, and for good reason. This particular Renault 5 is entirely electric, with circular digital gauges and an electronic shifter. Thankfully, the focus on electric power is largely restrained here. Sure, you get a phone dock and fingerprint readers to unlock the car, but Ganalons hasn’t gone overboard and that’s a very good thing. Besides, even without much in the way of tech, the interior of the Renault 5 Diamant still knows how to make a statement.

[Editor’s Note: How are you not mentioning that this is one of the only cars ever to have freaking doorknobs instead of door handles? – JT]

Have you ever seen a marble steering wheel on a car before? No? Honestly, neither have I. Nor have I seen one with an insane double-loop shape and an offset hub. It’s not a circle, it’s not a yoke, it’s made of recycled Grand Antique d’Aubert, and it’s just so wonderfully bizarre. Then you look down and realize that the steering wheel isn’t the most insane part of the interior. The accelerator pedal appears to be centered under the steering column, meaning that due to the massive box where your right leg would go, you could theoretically drive this car using only your left leg. It’s completely mad, yet not in a bad way.

Once you wrap your head around the absolutely mental driving position in the Renault 5 Diamant, the rest of the interior starts to feel a bit conventional. It most certainly isn’t, but it’s just so hard to top that level of lunacy. Still, a marble center console tries its best, while the horsehair dashboard is hand-woven by Métaphores. Renault claims that Métaphores is the only workshop on earth to hand-weave horsehair, a rather bold assertion. Maybe there’s a textile clause to that, but still. Speaking of textiles, the mohair carpet is made by French tapestry artisan Pinton. In case you’re wondering what kind of animal a mo is, mohair comes from Angora goats. Hey, the more you know, right?

All in all, the Renault 5 Diamant is a very fitting tribute to an absolute icon of French motoring. See, the Renault 5 itself was a product of wonder and material innovation. As told to Hemmings, the story goes that stylist Michel Boué first sketched the Renault 5’s silhouette over a photo of a Renault 4 simply out of wonder. One of his bosses saw the drawing, and the car allegedly made it from sketch to full-scale model in just two days. Feasibility of the flush bumpers would come later, largely unadulterated from Boué’s vision. While Boué himself passed away before the Renault 5 entered production, his vision lived on in more than five million production examples.

So, wonder and material innovation requires a tribute of similar wonder and material innovation. Come on, you can’t argue that there isn’t a sense of wonder to that marble steering wheel, or that pink frosted paint job, or the gem-cut lamps. Mind you, the Renault 5 Diamant does involve NFTs which seem quite dreadful, but the car itself seems rather spectacular. A fitting tribute to a French icon and a fitting bridge to the reborn electric Renault 5 launching in a few short years. Pretty please, Stellantis. Can we have a go in the new one?

Thomas is a Nu Rave-blaring, heel-toe downshifting, maple syrup-swilling, chassis-geeking, junkyard parts-hauling, floppy-haired scenester who's been writing about cars since college. His current ride is a 2006 BMW 325i with the six-speed manual gearbox. Instagram: @thomas.hundal Twitter: @thomashundal
Read All My Posts »
PrevPreviousThere’s A Rare Smart Roadster For Sale Just Across America’s Border
NextOur Daydreaming Designer Imagines A Special Subaru From The Japanese Bubble EraNext