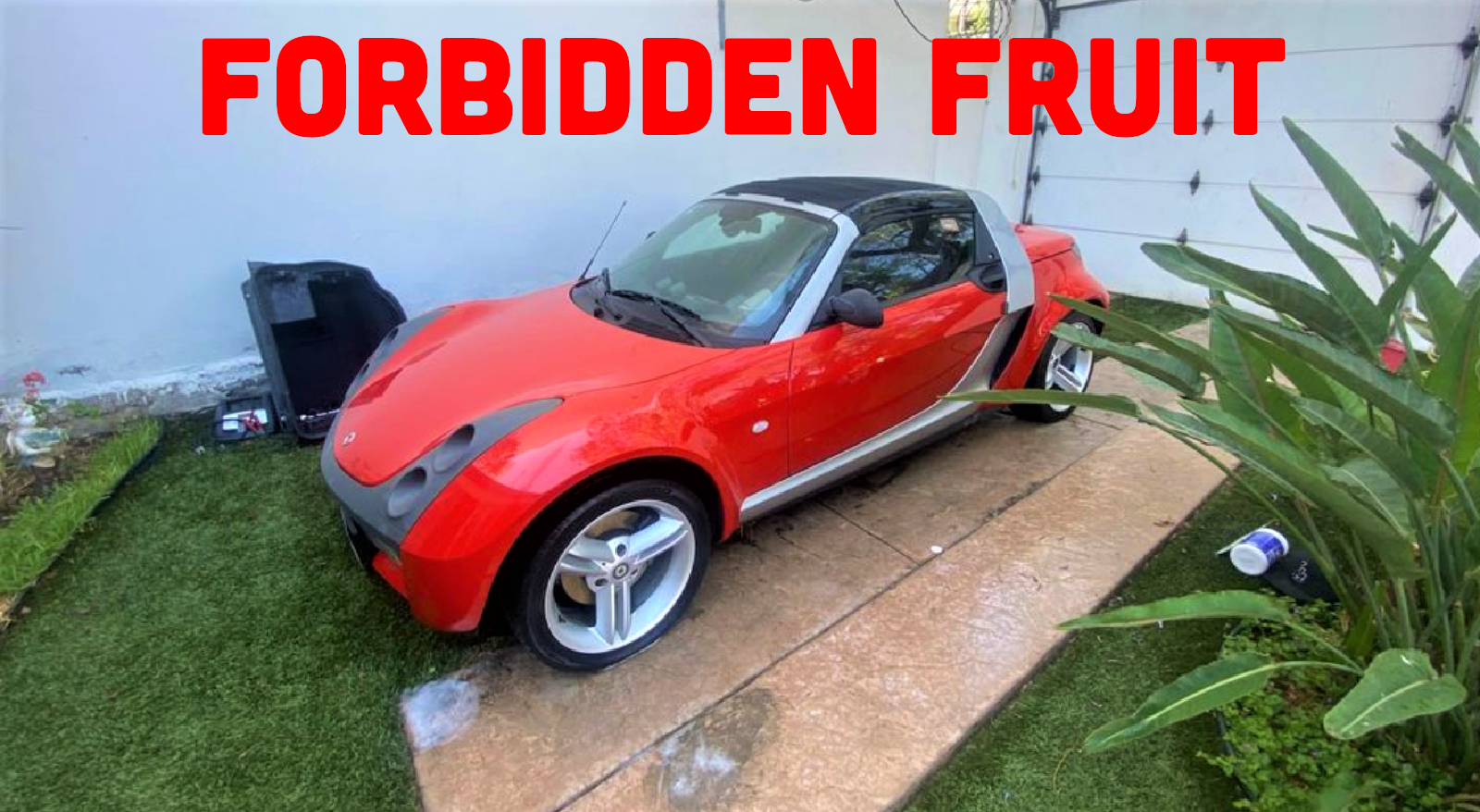 Located just across the United States-Mexico border is an offbeat piece of automotive history. A 2005 Smart Roadster sits, waiting for someone to experience Germany’s take on the British roadster. There is just one problem: you’ll have to get it back across the border.

I’ve been asking readers to send me sweet cars, buses, and RVs for sale. My inbox has been filling with awesome vehicles, some of which I’m actively researching right now! But yesterday, between the fireworks, taking a motorcycle ride, and going swimming, a reader sent in a car that made my heart skip. It was such a good find that I responded to the email right away. Thank you, Daveed!

The car is this red 2005 Smart Roadster. It’s a car that’s annoyingly so close, yet so far from being in my clutches.

Now, I know that some people don’t understand my love for Smarts. I have five Fortwos, after all, and I’m always looking for more. Fortwos are slow, sometimes uncomfortable, and are usually connected to a drivetrain that leaves something to be desired. Americans voted with their wallets that the Fortwo didn’t really belong, and eventually the brand pulled out of this country entirely.

But other parts of the world got more exciting Smarts. Arguably the coolest of which was the Smart Roadster.

Smart launched in 1998 with a city car concept that promised to make driving around a city trendy, fun, convenient, and safe. The City Coupe (later renamed Fortwo) is a tiny two-seat runabout that is so small that it could be parked end-to-end in a parallel space and not stick out. It had plastic panels that resisted denting and could be swapped out in just a few hours. And its distinctive “tridion” safety cell made the car safer than most would expect.

To get all of a real car into such a diminutive package, the engineers at Smart crammed the drivetrain into the rear of the vehicle. The car’s three cylinder engine and transmission tuck neatly under the vehicle’s trunk and drive the rear wheels. This allows the front end to be real stubby as it holds only components like the radiator, cooling fan, and some HVAC parts.

It wasn’t long before Smart’s designers began proposing a future where the company’s concepts would be applied to different kinds of cars. In 1999 and 2000, Smart rolled out a design study and then a concept car for a sports car at European auto show. This sports car would harken back to the British roadsters of the 1950s and 1960s. Where the Fortwo focused on making city driving easy and trendy, the Roadster would hone in on the driving experience.

In 2003, the Smart Roadster and Roadster Coupe released to the world.

On the outside, the Roadster looks like nothing else built before or since. Angular plastic panels are contrasted by Smart’s signature safety cell. And at the top of that safety cell is a roof that pops its top for an open-air experience. In more expensive trims, this is a folding arrangement that electrically folds itself back behind the seats. I’d say this car looks even more fashionable than the City Coupe/Fortwo that came before it.

Inside, the interior is similarly distinctively Smart, with gauges sprouting out of a fabric-covered dashboard. Swiveling HVAC pods flank the dash’s sides and the instrument cluster looks like it would be at home on a motorcycle.

But the neat part is that underneath, the Roadster has the running gear of a Fortwo.

The engine–still out back and under a comically tiny trunk in the regular Roadster–is the 700cc Mercedes-Benz M160 Suprex turbocharged three. In lower-spec Roadsters it makes 61 HP with higher models getting 82 HP. In 2004, Smart released a Roadster modified by tuning house Brabus that makes 101 HP. Acceleration times to 60 mph were about 10.9 seconds, 10.7 seconds and 9.5 seconds, respectively. So, not fast no matter which you get.

The Roadsters would also be faster than the Fortwos in which it gets its running gear from. While a Fortwo, with its short wheelbase, tiny tires, and narrow track, topped out at an electronically-limited 84 mph, the Roadsters didn’t have such limiters. Thus, the 61 HP Roadster hit 99 mph with the 82 HP variant hitting 108 mph. The Roadster Coupe, which had a sleeker profile thanks to a bigger glass trunk, hit about 112 mph.

Getting a Brabus got you right at that 120 mph mark.

It would go on to polarize car reviewers. One famous review by then Top Gear presenter Jeremy Clarkson said that the car feels “so much more alive than any million-horsepower, heavyweight BMW.” He went on to say how he wanted to hate it but “it’s so responsive and such a giggle that it just puts an enormous smile on your face.” Clarkson finishes his review by comparing the 1,851-lb Roadster to the British sports cars of the ’50s and ’60s before calling it a “proper, undiluted, sports car.” Top Gear went on to nominate the Roadster its Fun Car Of The Year for 2005.

Other reviewers were less kind. Know how I said that these had the running gear of the Fortwo? That also includes the Fortwo’s single-clutch six-speed automated-manual transmission. These transmissions, especially the earlier units, were known for shifting so slow. Practically every review, even Clarkson’s, noted how slow it shifts.

Andrew Frankel writing for Autocar (referenced by Hagerty) called it “least enjoyable of all” when compared to a Ford Streetka, Mazda MX-5, and Peugeot 206CC. A number of Australian reviews praised the car’s handling and sound, but concluded that the car had too little storage and too high of a price. Folks in Europe could get them for the equivalent of $16,914 in 2003. That car came with the slower engine, without a power roof, without an air-conditioner, without alloy wheels, and even without a radio. Getting those luxuries bumped the price to about $24,254.

Car And Driver was so nice to the little Roadster that its reviewer noted that its transmission worked better than similar units found in BMWs and Maseratis of the day. A common theme with the reviews was that the Roadster had sharp go kart-like handling, but just didn’t have the speed to back it up.

So, what’s going on with this 2005 Roadster in Mexico? It looks to be in rather fantastic shape with its red paint still shining and leather seats looking really clean.

The car’s history or powertrain aren’t noted at all, and there isn’t even an engine picture to help you identify what’s going on. Despite that, I can’t stop myself from staring at it and dreaming about owning it. Asking price is just $6,000, which makes it an easily attainable dream car.

These cars are known for their aggressive water leaks. If you search the net you’ll find people complaining about water leaks before their cars’ warranties even expired. And a particularly bad leak can occur right over the car’s computer, frying it out. That adds on to the drivetrain’s existing quirks, like an alternator that can rust-seize if you live in a humid place and don’t drive frequently.

As the Lane Motor Museum notes, these issues added up to high warranty costs and led to the demise of the Roadster. Smart sold just 43,093 of them before it got canceled in 2006. Being 20-inches shorter than a Miata with a giggle of a drive wasn’t enough. Businessman David James tried to save the Roadster with Gordon Murray’s help. The car would have also been a revival of the AC brand, but it never got left the concept stage.

Unfortunately, getting a Roadster across the border would probably be more work than it’s worth.

A number of the importers that I’ve worked with on my importation articles have noted that it is possible to get around the infamous 25-year import rule. But doing so costs a ton of money, involves a mountain of paperwork and mind-boggling amounts of time. And there’s no guarantee that the importer’s efforts will even pay off. I’ve been told more than once that I’d pay several times the value of a cheap import to do it. Still…a girl can dream.

Mercedes is a lifelong fan of all things powered by an engine. When she isn't driving one of her five Smart Fortwos or her 14 other vehicles she could be found in the cockpit of a Cessna 172 or perhaps swimming in any body of water that she could find. She also has a deep love for buses of all kinds. Please send her buses. mercedes@theautopian.com Instagram: @mistymotors Twitter: @Miss_Mercedes30 Facebook.com/neonspinnazz
Read All My Posts »
PrevPreviousWe Ask An Actual AV Engineer Why Two Recent Tesla FSD Videos Show Such Dumb, Dangerous Mistakes
NextThe Renault 5 Diamant Literally Reinvents The Wheel In A 50th Anniversary Tribute To One Of France’s Most Iconic CarsNext